IN CONVERSATION WITH BROC TICKLE

2019 UPDATE: Following the FIM hearing Broc received a two-year suspension that was backdated to the time of the failed test. He will be able to race again as from 10 February 2020

Broc Tickle was on top of his world, a contract with the top team in US supercross, knocking on the door of podium finishes, in form and looking good for the season – and then he received an email from the FIM…

It’s been fun last couple of years. I’ve made progress, I’ve had a couple of injuries, but when I came back I was always fighting for more, I would get a podium here and there, so it kept me on the radar, enough for KTM and I to start talking after my supercross podium in Toronto last year. And I signed after I got a third place at High Point in the outdoors, we negotiated a deal and that was a big opportunity for me, it was something I needed. I needed a change after four years at RCH, I had got a little stale and whatnot and wanting a change. RCH ended up not having a team for 2018 anyway, so it kind of worked in my favour. So heading into the 2018 season there were a lot of things moving around, having signed with KTM, with Alpinestars headto-toe, and with Oakley – everything changed.

I really enjoyed the bike when I got on it, although if I’m honest I kind of struggled a little bit when we got onto supercross (training). But obviously they (KTM) have the tools and the guys to make it right, so we made some changes and I started feeling comfortable. I didn’t catch my stride until two or three weeks before Anaheim, but by Anaheim I knew I had put in the work and done what I needed to. It took me a lot longer to get where I wanted to, but it’s supercross, it’s never easy. And once I got a little confidence going things start to improve. Indy was awesome, I was in second place until three or four laps from the end when me and Dean Wilson came together, so I got fifth, which matched my best finish, then I got fourth in Seattle. Then in April I was on my way to the flight to the Minneapolis Supercross when I got an email from the FIM legal department and I thought, what’s this?

It started there. Like a police citation, I knew didn’t want to read it (what was it? Read the FIM press release below – Ed). I called the team right away and even thought about not getting on the plane and staying home.

You couldn’t beat the combo, and then being around Marvin, Zach and Jason during the week, training down at Aldon’s – it was the dream. I had literally signed my deal with KTM as soon as the outdoors was over, flew down to Florida and did a baseline test with Aldon (Baker – trainer to many a supercross star) and checked out some apartments in Florida. 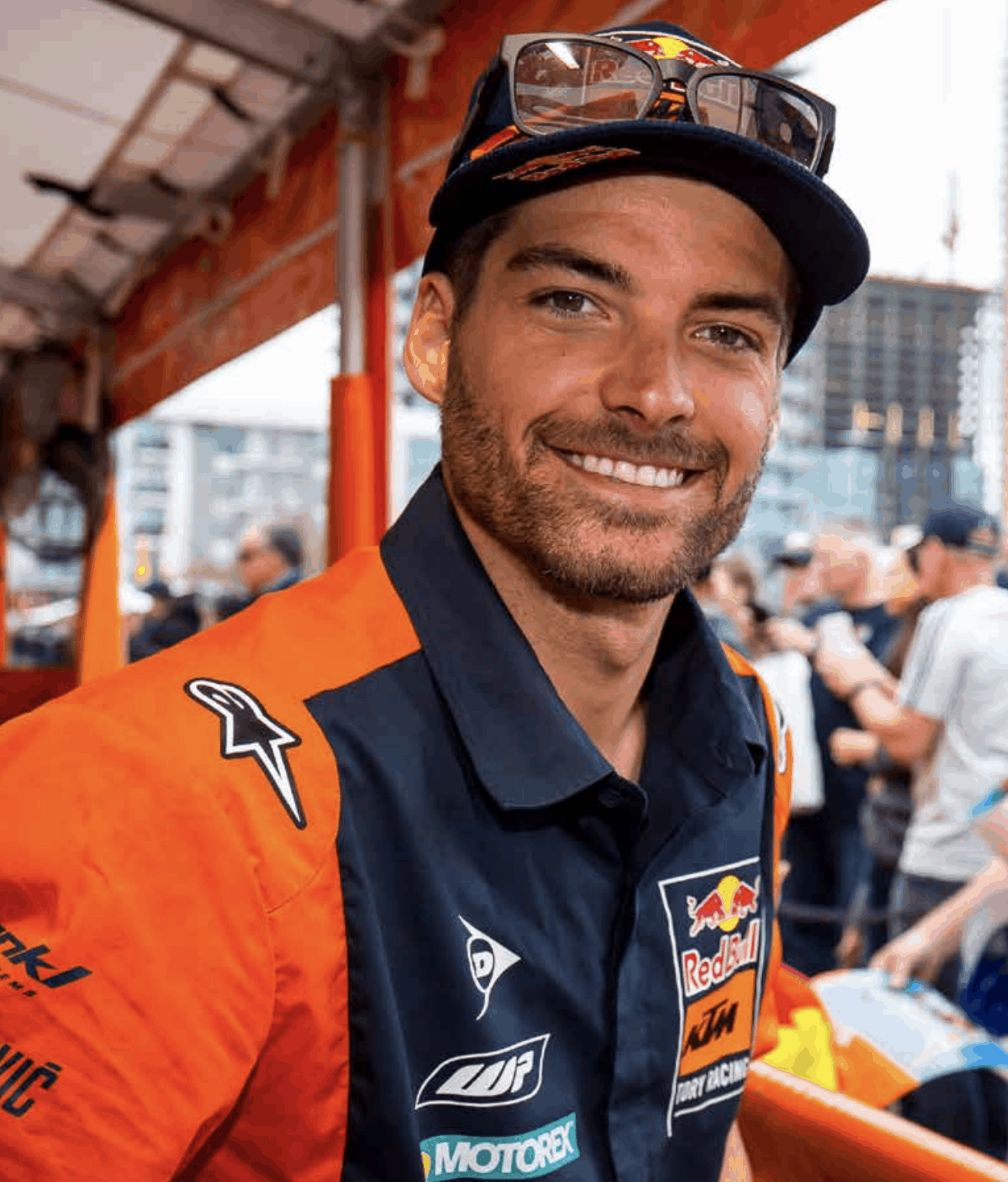 There were a lot of moving parts to sort what with boot camp starting down there at the end of October. But it was really good, I learned a lot. But I got on the plane and went down to press day on the Friday only to be pulled aside by John Gallagher (race director) and the guys from the FIM and they said you’re not to be able to race this weekend so you might as well not do press. So I was like okay, I’m just going to fly home.
So I flew home Friday, hung out over the weekend, then Monday I got hold of a lab here in California and did a urine test and brought my supplements in to get tested. The testing of the supplements took a bit longer than I thought, but there were no answers there, I have no idea where the compound came from. My urine sample came back clean, too.
And since then it’s been a matter of waiting for the next step to get there. We’re close now – it has been a long time – but from the beginning once this process started I kind of accepted its going take a little more time than I want. But we’re getting close to a hearing date and that’ll be the next step, to go to the hearing and fight the case as good as I can. And hopefully get the minimal sentence. 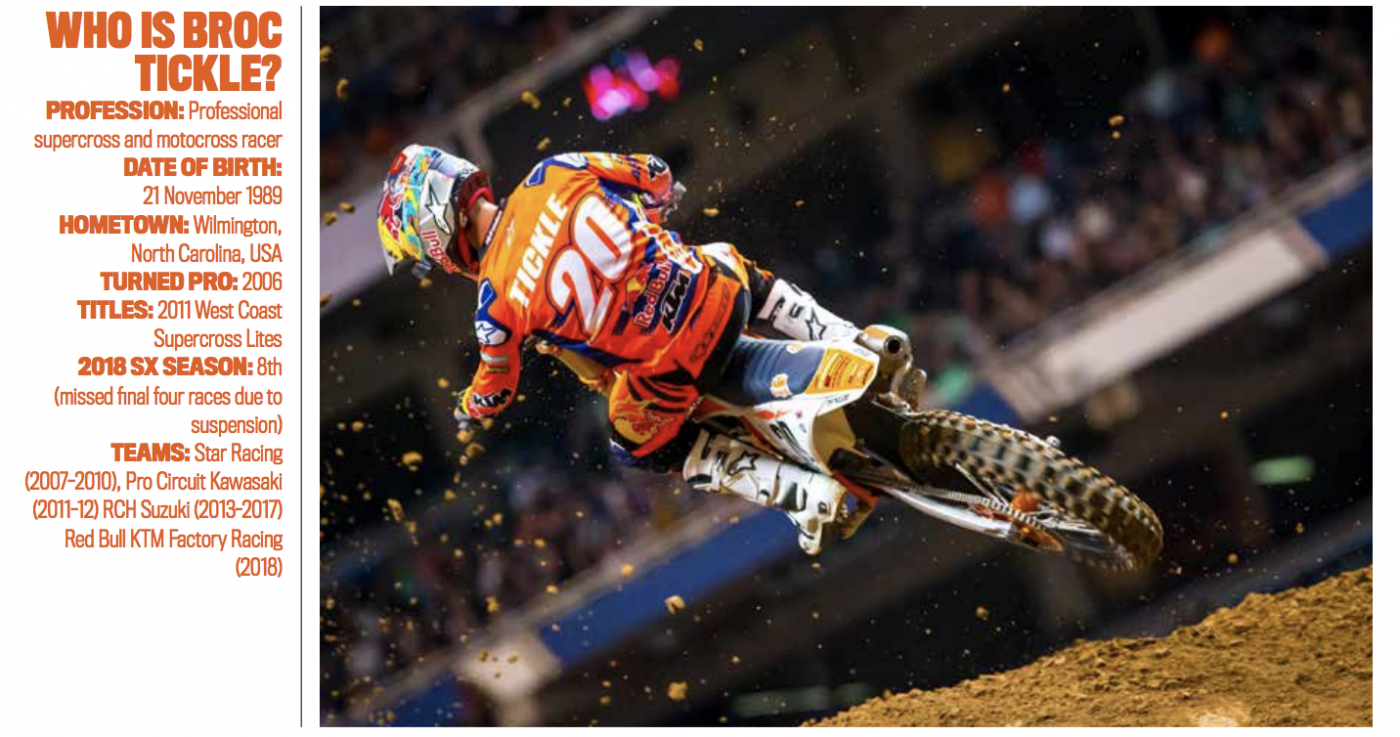 You know, I don’t know what I would be doing without this – racing is my life. I got a PW50 when I was three, at Christmas, and ever since then my whole racing career has been progression, like I still feel I haven’t got to my best. I feel like I’m that guy who always makes progress, I want more and I believe I can do better than what I’ve done, but at the same time I’m still making progress, it’s not like I’m going backwards.

I wasn’t good on 50s, or 60s, I made it to the amateur nationals but I wasn’t good, just good enough to make it. And then when I got on a big bike I went to the next level, I showed up at an amateur national and I was fighting for wins (winning a Loretta Lynn’s 250A title). Then I went to Millville in 2006 and got 11th in my first moto as a pro. I kind of struggled for my first couple of years but had a few decent enough rides to keep me around and then Mitch (Payton of Pro Circuit Kawasaki) saw something in me. When I signed that deal I knew I was going to win that championship (2011 West Coast SX Lites) that next year, I had that feeling, I’d already made my mind up that that was what was going to happen. I struggled in the outdoors that year because I felt I’d accomplished something so big that I would never have imagined I would have done, and so I didn’t reset and have another goal, so for that whole outdoor season.
I struggled. And kind of struggled in supercross the next year in the 450 class, but then in the outdoors I got five or six podiums and fifth in this championship so always when I’ve got to the bottom I’ve pulled myself back up and made the best of the situation. I’ve always lived by ‘don’t give up, don’t ever give up’. Obviously here in the States, in supercross and motocross everyone works hard, every team is working hard to do better. The sport is true dedication, a day-in day-out thing that you have to put your body and mind to. It requires absolute focus, the focus has to be there because it is dangerous, obviously so, if you lose the focus there’s a chance of you getting injured.

And despite ten-plus years racing supercross I still get nervous in going through the transition from outdoors to supercross. That first supercross session after riding outdoors all summer – I’m scared. I am. But by the time the season comes around and you’ve got through the first couple of races, it seems normal. Supercross is tough here, there’s a lot of competition and everyone is always pushing for more, and the talent is not getting any weaker. And even after ten-plus years it still has that special feeling.

It is unrelenting, too. I know the date I stared training with Aldon, it was September 10. I didn’t have a day off from then until I got my B sample results (April 14). And I’ve only taken one day off since then, doing stuff every day to stay active and keep myself sane. Going from supercross to motocross and back again, it makes for a full year, there’s little or no rest and to do that for ten-plus years is quite something. But it becomes natural, a way of life, I don’t what it is, if I become tired or whatever I can still get up and still go for a run in the morning, it feels normal. If I don’t do it I feel like man, I’m losing it! This sport is not easy by any means, but all of us enjoy it, if you don’t you’re not going to do well. People asked me this year, how much longer do you think you want to do this? And I don’t really have an answer, but like most of us, it’s until we’re not enjoying it anymore. Obviously there are times when you’ll not enjoy it, but it’s only when you’re completely over it do you call it quits. And the I feel the situation I’m in now is not the way I saw myself going out at all, so I can’t accept calling this it, for good. So for me I’m mentally ready to keep going. 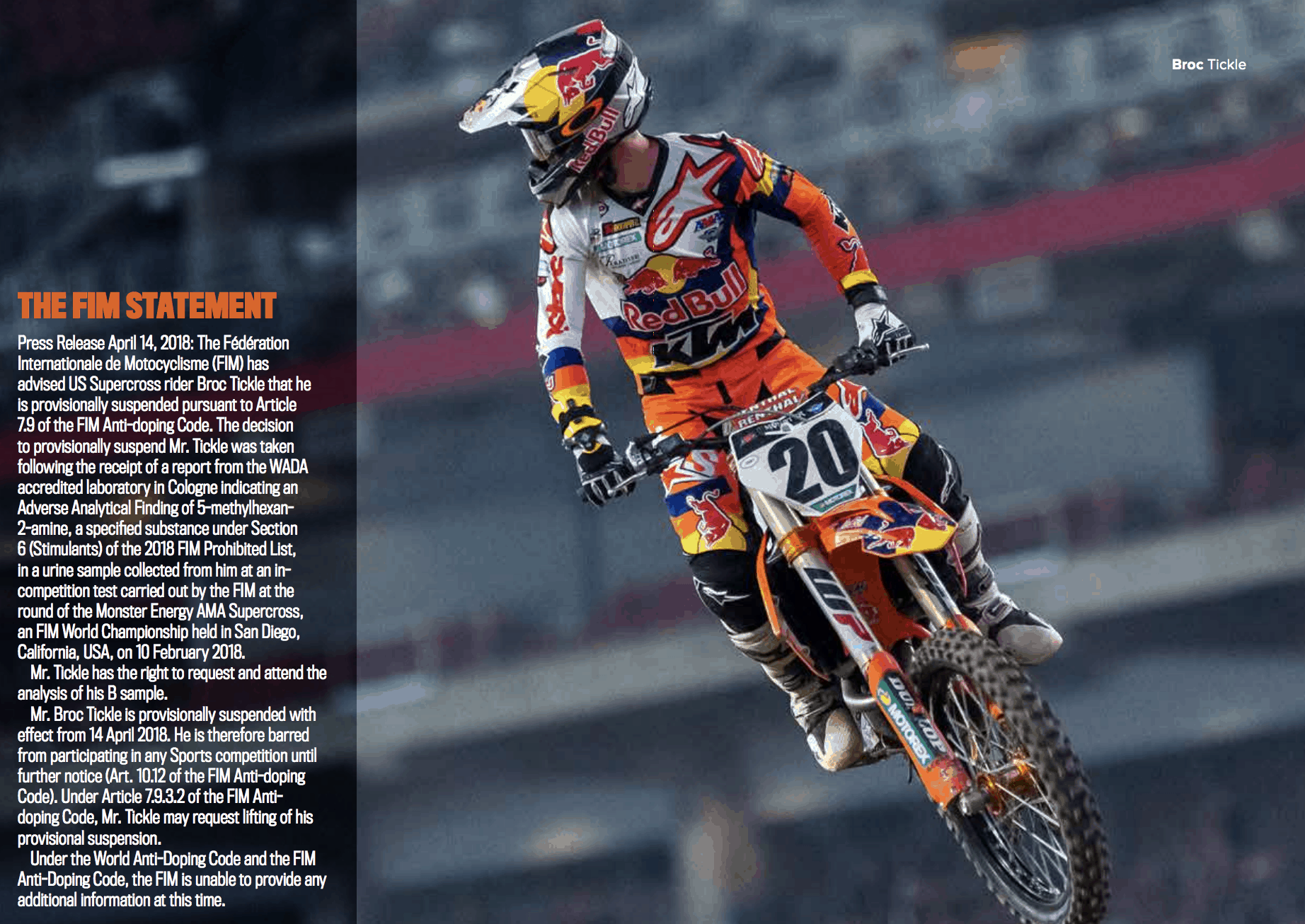 After that unrelenting routine, day after day, such intensity, dealing with the FIM, with Geneva, has been difficult, slow… The time zone difference makes it difficult, but the whole deal is tough, like 30 days ago they sent me an email to say I should have a hearing date set in the next 21 days, but its been 30 days or more, and until I see the FIM legal department ID pop up on my phone I won’t know my hearing date. It’s taken three months to get to this point now. But at least the suspension will start when it was issued at my last race, so it’s not like it starts at the hearing date, so that gives me three months done. But as I understand SUPERCROSS Broc Tickle 32 www.rustsports.com www.rustsports.com 33 as of now I could face up to a four-year penalty. Dealing with the FIM isn’t easy. We asked for the lab report documentation and it was like we were asking for the code for their house, they didn’t really want to give it to us – and on top of that I had to pay for it! All you have to do is press print or copy to a file and send it to me in an email and its’ right there… but I’m accepting how long the process is going to take. I would hope my example makes an impact to change that, to see something of a logical system, ‘Hey Broc, you had methylhexanamine in your system – you’re out for four races.’ Something like that – set in stone, there’s a graph, a table, no need for communication, they just email back, ‘there was this in your urine, you’re out for six races. If you screen dirty again then you get double’.

I’d like to see them work out a system that would be more logical for our sport. And on that side of things, I feel the right way would be to have someone here (in the US) who would handle things, who would know at all times what was going on. There are FIM guys who come here to the races, but you can’t find out that much information from them, so it’s difficult. But like I’ve said, I know I’m in this position for a reason and it’s going to work out like it’s supposed to. There’s a bit of faith and inner belief there. I think it’s a combination of both, believing in myself, and keeping strong through this whole process, it’s about doing things, staying busy, being around positive people, everything that is required to do so. And then on top of that growing up in a Christian household obviously my faith is strong and I believe I’m here in this situation for a reason so make the best of it and things will turn out the way they’re supposed to. 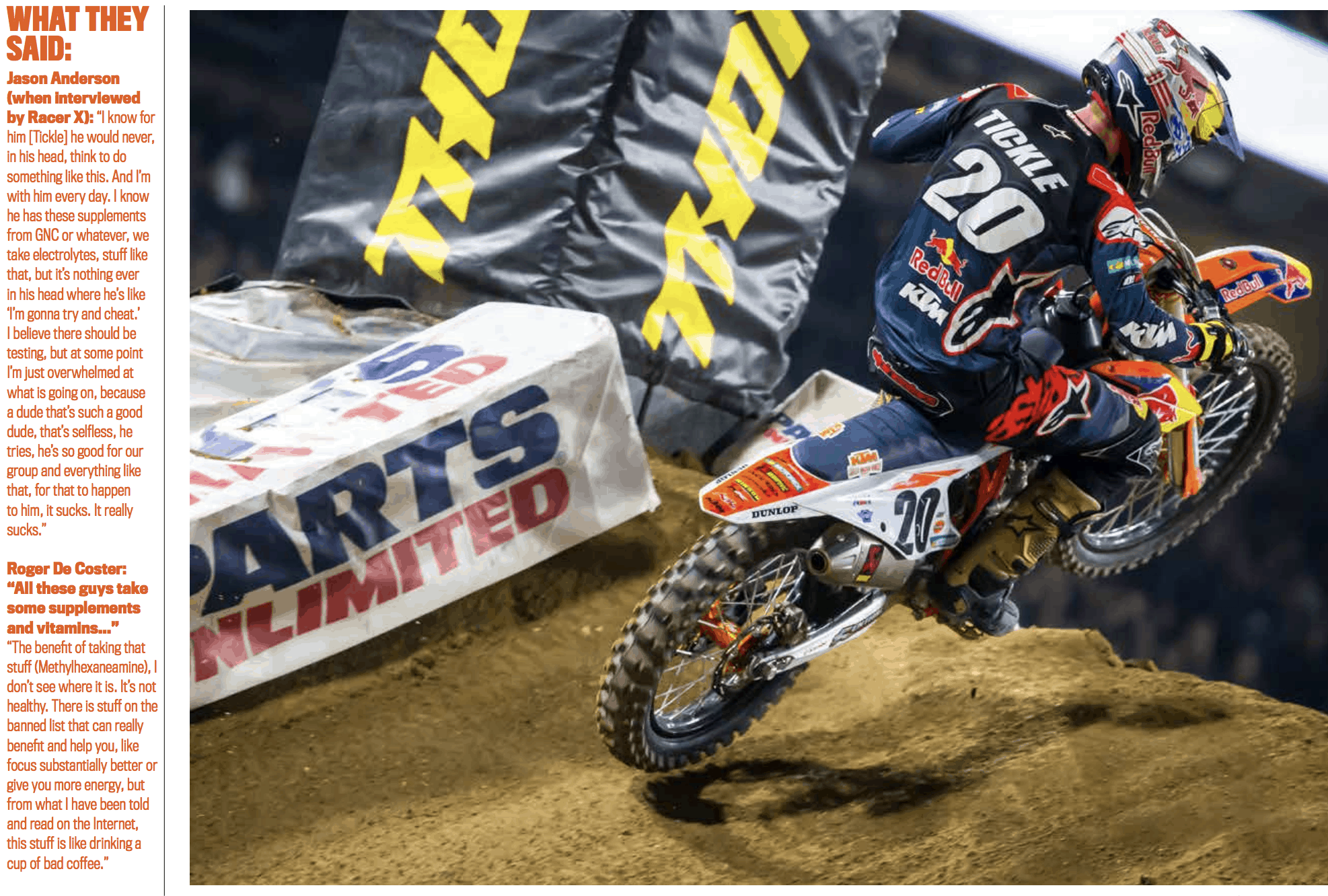 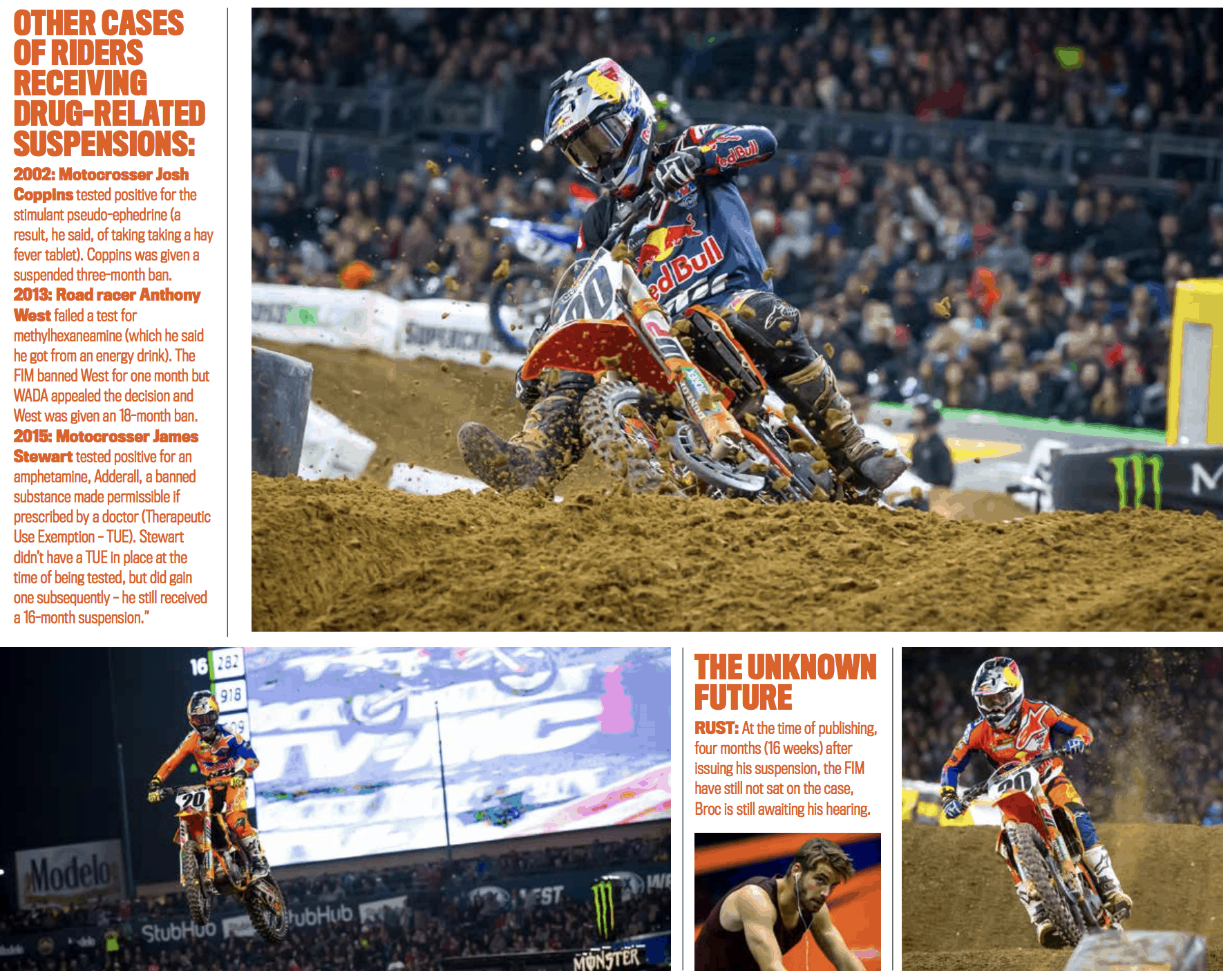