‘Supertech S-M10’ – there’s a clue there in the name. The ‘10’ bit – just as with Alpinestars’ Tech 10 boot, that number denotes top of the range. Alpinestars are entering the dirt bike helmet market at the top, with an all bells and whistles offering that’s set to go head-to-head (of course) with the current market benchmarks such as the Bell Moto 9 Flex, Shoei VFX-W and Arai MX-V.

SO WHAT IS THE TECH?

Carbon features, as you’d imagine. So we have a high-density carbon outer layer, then a unidirectional carbon composite layer and finally an aramid fibre layer. So it’s super-strong, so strong it exceeds regulation standards by 41% for direct impacts and 48% for rotational acceleration–oblique impacts. There are four shell sizes too, so the helmet is always optimal for your head size. And with carbon being a light material this all makes for a comparatively light shell – 1260 grams for a medium helmet.

Another unique feature! Got to hand it to Alpinestars, the visor (peak) fitting is super-slick in the way it’s integrated into the helmet and how the fitting points are flush fitting. So the exterior of the helmet is entirely flush with no possible snag points. But as well the visor retention system has been engineered to release once a certain load is exceeded, so as to avoid the possibility of potentially dangerous leveraging or rotation of the rider’s head. 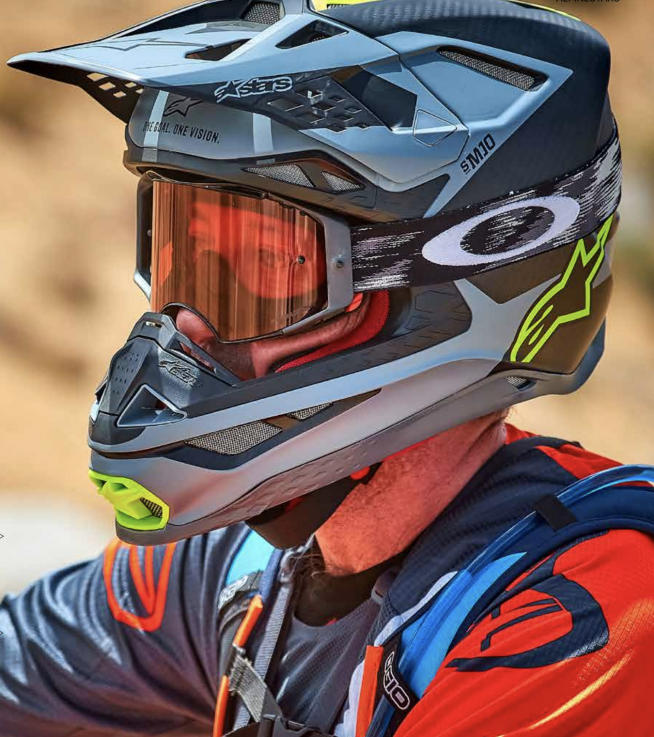 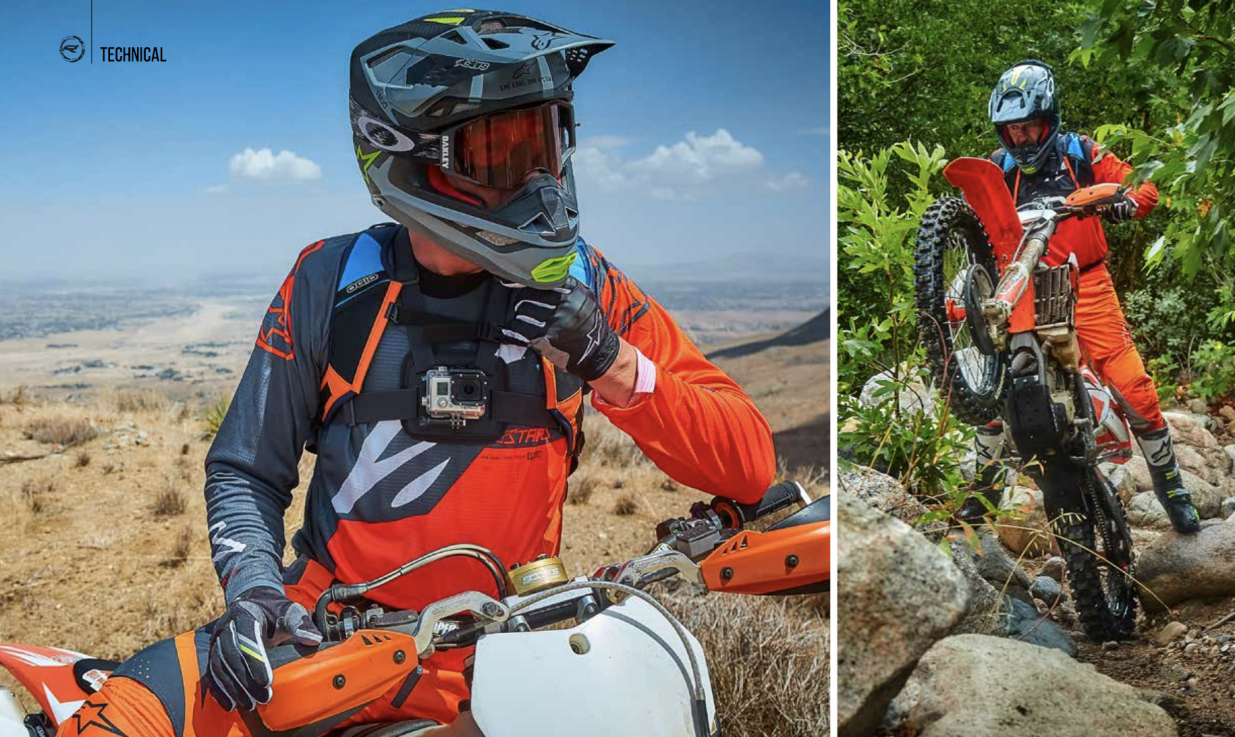 The bottom profile of the helmet is sculpted to clear the rider’s collarbone while the section of the base pad immediately above this area is made of a flexible compound rubber section to further lessen the impact of any likely connection between helmet and collarbone in a crash. Further protection is afforded by the use of polypropylene on the inner chin bar, which allows a degree of lateral protection.

EPS – that’s expanded polystyrene – is that energy absorption layer that we know is so important in reducing the forces that’ll reach your head in a crash. In this instance Alpinestars have specified four densities of the EPS to suit the different zones around the helmet.

MIPS – here we go again, that’s MultiDirectional Impact Protection System – is fairly well known to us as it exists in competitors’ top end helmets such as from Bell and 6D. Essentially it’s a slip layer between the comfort lining and the EPS, which allows the helmet to rotate very slightly on the head in an impact, thus reducing the acceleration stresses which lead to common brain injuries such as concussion. As a byproduct, Alpinestars have also found the system makes for a quieter helmet for the rider.

Here Alpinestars have a totally unique feature. A-Head allows for microadjustment of the height and angle of the helmet on your head. Through an adjustable pad on the inner shell it’s possible to raise or lower and to tilt the helmet according to the rider’s preference.

In the event you do go for a big one, the S-M10 comes with ERS (so many acronyms!) – Emergency Release System – which we should know allows the cheek pads to be removed by medical staff prior to removing the helmet. But to help further, the S-M10 is also ‘Eject’ compliant, allowing the Eject inflatable emergency removal system to be deployed – which is critical in spinal injury situations.

Using heat mapping tests Alpinestars have worked hard on the ventilation system to optimize the flow of (hopefully) cooling air around the rider’s head through the provision of multiple intake and exhaust ducts (guarded by wire gauze). This combined with a cool-max interior liner, plus channels in which to integrate your hydration system (and even a communications system) makes for optimal rider comfort. Oh, and they’ve even given the humble strap a thought or two, at 26mm wide (an inch in old money) it’s that little bit wider than most, so again more comfortable. quality of trails, I’d love it as my backyard too.

SO, THAT’S THE TECH. WHAT ABOUT THE WEARING?

As an enduro and rally rider I have to say Milestone is not my bag and with the prospect of Ryan Villopoto and Broc Tickle for (fast) company it was no place for an old tree-dodger to plot about. Fortunately Alpinestars listened to my pleas and instead I enjoyed a brilliant four-hour trail ride in the Mojave high desert (like 4000ft high) near Lake Arrowhead, San Bernadino. My guide was Ricardo Barbosa, boss of 3 Brothers Racing (USA’s top distributor of KTMs) and this is kind of his backyard, a place he’s come to for decades. And given the quality of trails, I’d love it as my backyard too.
And boy was it hot up there, about 100ºF (38ºC), and with the altitude and possibly a little jet lag, it was a little uncomfortable for a sea-level living Brit. Fortunately the heat at least demonstrated the S-M10’s excellent ventilation features which drive air through the mouth piece and via the inlets around the visor (peak) over the rider’s scalp. Although I didn’t use them for this trip I could appreciate that Alpinestars have also integrated channels within the liner and chin bar to take the tubes of a hydration system – a neat detail.
Unusual to this market sector, the visor (peak) is fixed in the one position, so there’s no scope for personalization, but the angle and the length of the visor is well set so for 99% of users so there should be solid satisfaction on the account. The aperture is good for any size of goggle (I wore Oakley Airbrakes, one of the biggest frames on the market) while still leaving space for airflow to the face. Despite the generous aperture, a relatively tall bridge across the chin bar meant my nose did not go unprotected from Ricardo’s roost (when I could hang onto him). I liked that the nose protection is firmly molded too, so you don’t accidentally displace it as you can on some helmets when settling your goggles. The lining is soft and for those who like audio aids to their riding the good news is that there’s even a significant recess to allow the comfortable placement of speakers (and microphone).

Perhaps uniquely at this launch, I managed to properly impact test the helmet, when I twice washed the front out in deep sand. Each time I made a neat pivot over the bars and on the first occasion I managed to even clout something hard (making a fair ‘clang’). Now this is not exactly the ultimate test, but I’m happy to say the helmet stayed nicely in position and although there was some ringing in my ears from that first one, there was no undue damage to me or the helmet (save for a few scuffs on the latter).
After four hours I was still comfortable in the helmet – an aspect trail, rally and enduro riders will value. My photographer Olivier had fallen in love with his S-M10 too, and when Ricardo took a brief try in one (over his usual Shoei VFX-W) he was immediately impressed by the lightness and comfort. And you know, if RV is happy to wear one – and he was seriously smoking it around Milestone on his Yamaha YZ-F – who am I to argue?

So there we have it, one extremely well-designed crash helmet – stylish too. And as said at the beginning of this story, it’s coming at the top end of the market, joining the other super dirt helmets in the uppermost price range. Pricing is $579/€649 for the solid colours, and $649/€699 for the three ‘Meta’ colour options. And with the Supertech S-M10, Alpinestars have completed what is now a head-to-toe pledge of support and protection for the dirt rider. From starting out as a boot manufacturer 55 years ago – and I was one kid who valued his Roger De Coster / Victory boots as schoolboy scrambler – you could argue Alpinestars have been very successful in their diversification. Only it’s more a case of intensification, taking their ethos of best protection to every aspect of moto life. And with each step, it’s always a quality outcome…