The British ‘Motorcycle Live’ show has been on this week. We went along on the press day to see what metal we’d most like to have in our garage for 2018. These are our picks…

The British ‘Motorcycle Live’ show has been on this week. We went along on the press day to see what metal we’d most like to have in our garage for 2018. These are our picks…

You have to laugh – café racers are not really our bag (scramblers being our heritage touchstone), but we fell in love with this Trumpet. The detailing is superb, as is the quality – there’s so much love gone into this bike. We also dig BMW’s R nineT, but Triumph have aced the Bavarian wonder by way of a no-compromise build and by creating something so ice cool.

We still love the R nineT all the same, it’s blessed with an awesome motor and the styling is so brilliantly ‘pared back’, to adopt the popular vernacular. The racing number on this edition is borderline cool/uncool, but you gotta love a bold statement and faux-wear marks are kind of endearing. It’s a bit of kit, eh?

Credit to CCM, for years they’ve plugged away, making military-service utility bikes, small trail bikes and most recently the GP450 adventure bike. All of it a bit British, slightly off-centre – and served with a mug of tea and a biscuit. And suddenly out of the blue they score a bulls eye, hit the zeitgeist spot on with their limited edition Spitfire series. Lacquered bare-metal frames, SWM-sourced 600cc motor and not a lot else. Ultra-cool, and selling like hotcakes. When you’re hot you’re hot. Whispers from CCM seems to indicate the GP450 will soon become the GP600 when they slot that SWM motor into the adventure chassis…

The Italian brand is celebrating its half-century with the production of some cool retro machines: the Caballero scramblers and flat trackers, made in 125, 250 and 500cc capacities. Each of them look awesome, capturing the spirit of the 70s, while adding a modern twist. Teenagers should be wetting themselves for the 125s. A great look to them all, just ideal for the casual but style-conscious run down to the corner shop.

We’ve not gone mad; this scooter has its roots in the ISDE no less. Back in 1951 a bunch of Italian mad men took a swarm of Vespas to the then ISDT that was being held in Varese – and far from being laughed off the trails they did well, some of them scoring gold medals. This bike celebrates that wonderfully light-headed moment in history. We love the look. And for those days that the Caballero needs a rest from the milk run, we’ll take this.

Behold the Sea Nymph! Actually it’s the Continental GT, the new 650cc twin from Royal Enfield, Sea Nymph is the colour variation, but hey, why not be bold with your names? Of course, here we are venturing into café racer territory again, but why be consistent when you can be random? Anyway, well done RE on this, it looks great and at half the price of the Triumph Thruxton R it has an obvious attraction. Obviously a bit rubbish at gravel and singletrack, but there’s life beyond, eh?

This choice might end in the firing squad for the editor. But Mr B., the editor’s dad, owned and raced a Kawi Z1 ‘back in the day’ (1974-76). It handled like a pig, did his race career no good, but with an open pipe it sounded glorious and compared to the Norton Commando of the era, it clearly represented the future. An untamed future – the best sort. This homage won’t be as lairy, or as legendary, but it’s still got some attraction.

Ho hum – we’ve not done well on the adventure front here. But actually there were highlights. We give Honda a solid 10 for the new colourway on the Africa Twin, which harks right back to the beginning with the RD03 – sweet! We like that BMW’s new F 850 GS apes the colours of Africa Twin! Apparently the new 850 GS is heavier than the old 800 GS and in some ways it suggests a lower spec, but it also looks like it comes with a lower centre of gravity and this combined with a different engine characteristic could actually be a big positive. And it looks right, and feels right when you sit/stand on it – and when something looks right, often it is right. Finally, another non-new machine but something we like very much and would love to take home – the KTM 1090 Adventure R. It looks like a real dirt bike, with real dirt bike parts and a neat racy attitude. Much leaner than the 1290 variant. One of these days we’ll get to ride it. It’s all about time… 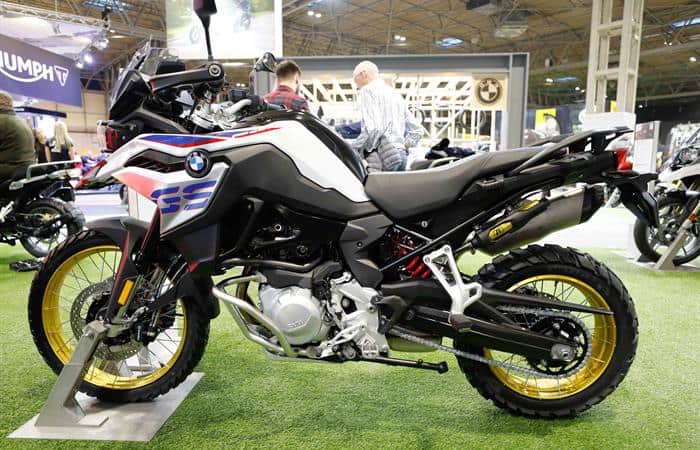 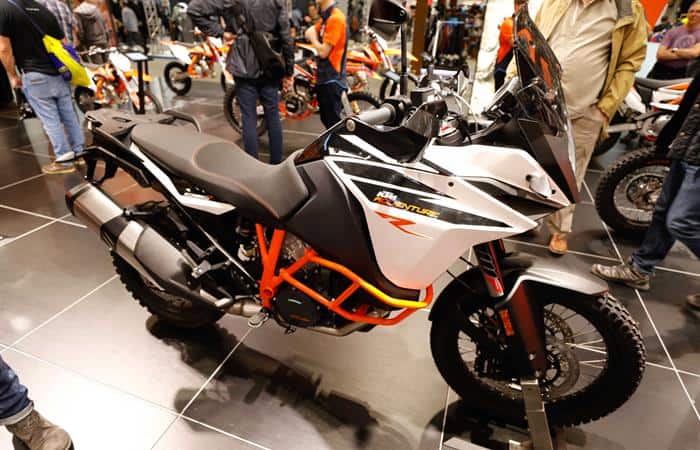 Some one-offs caught our eye: Honda’s flat tracking CBR, that doffs its fairing in the memory of Marco Simoncelli. The Spirit of Munro, at Indian (who’ve of course have run rampant in AMA flat track with their FTR750). Harley-Davidson XR750 – by golly they were crude. But so competitive… 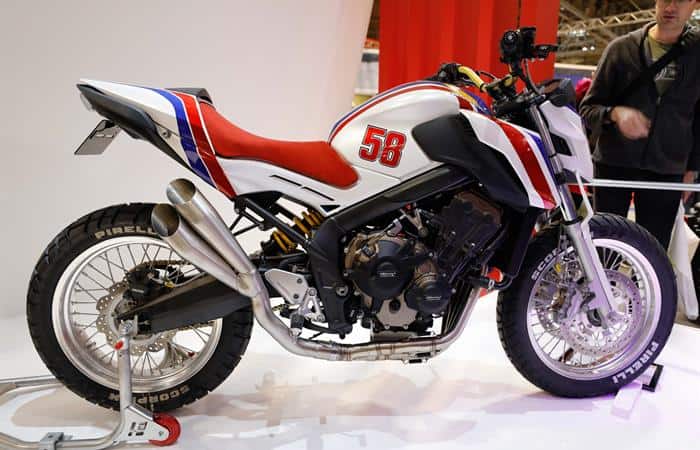 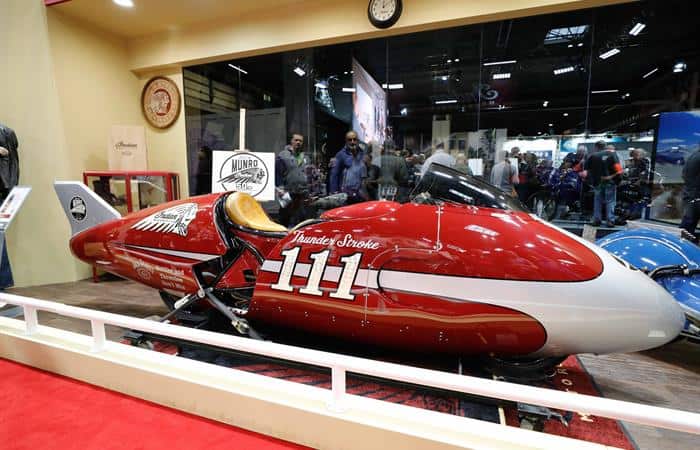 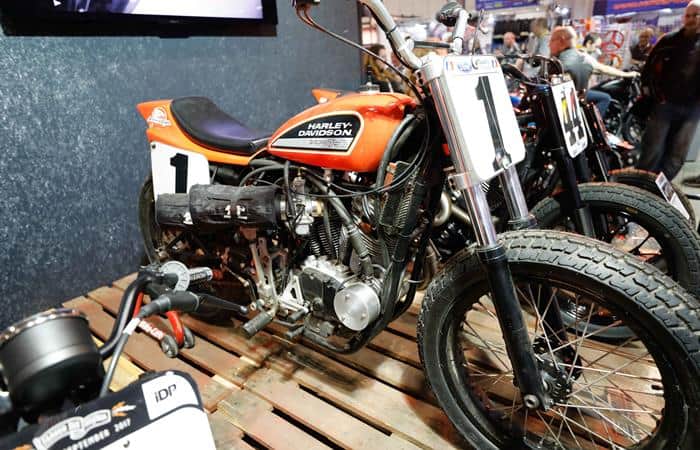 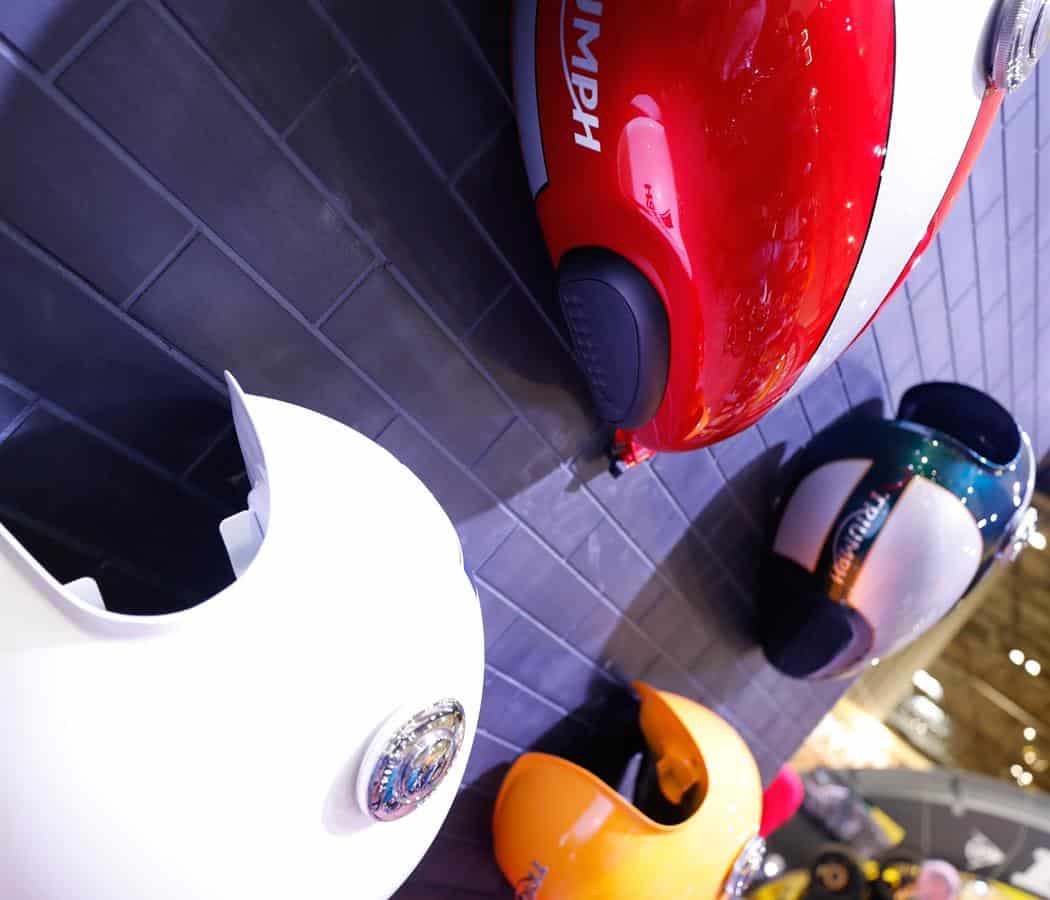 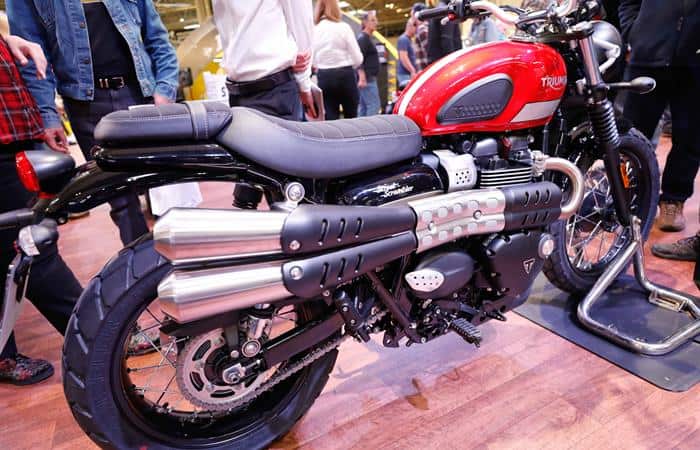 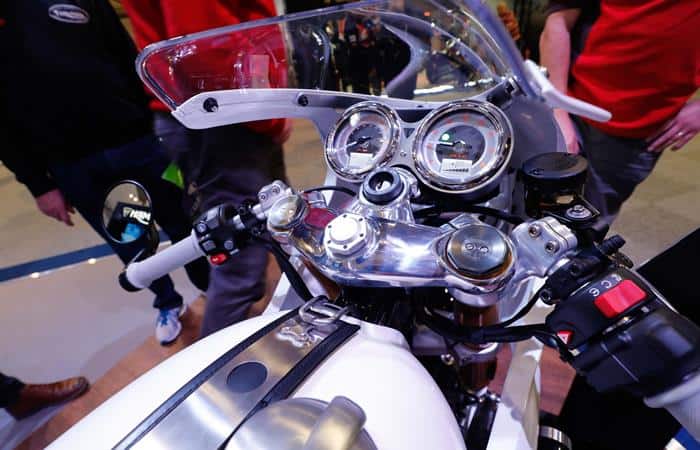 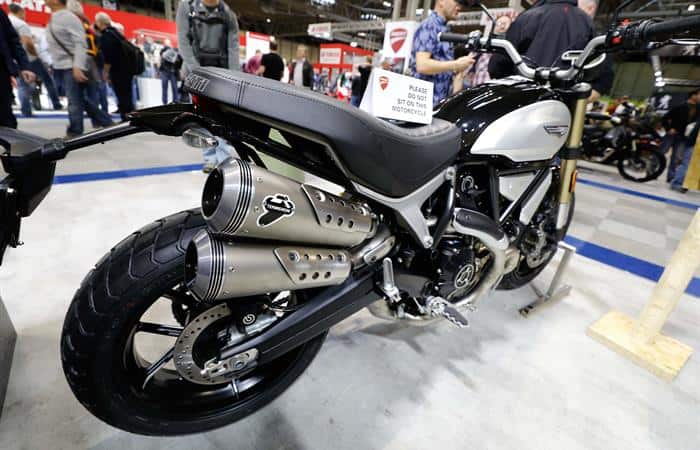 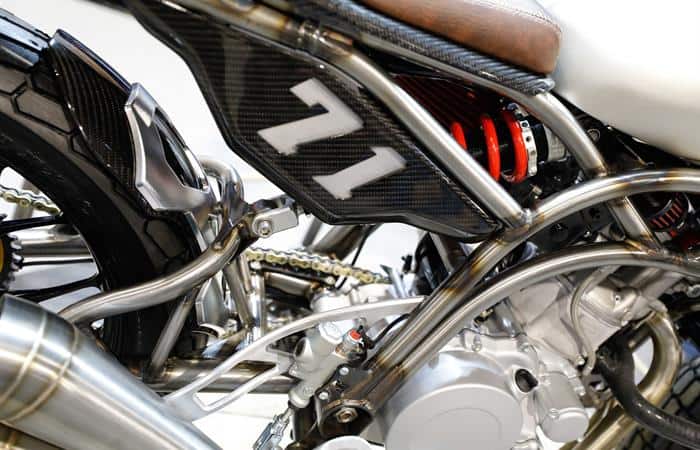 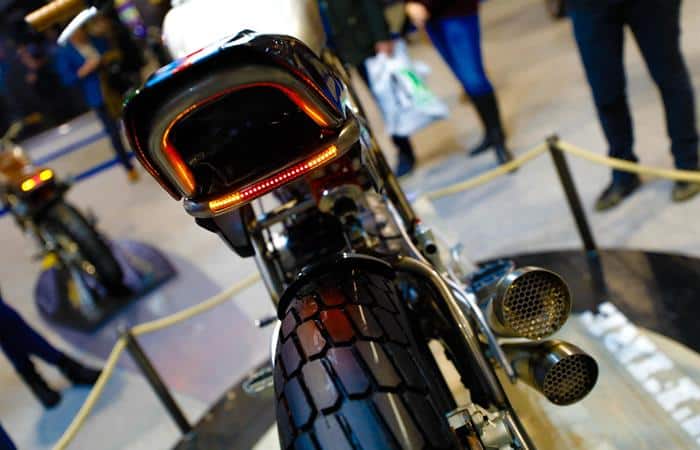 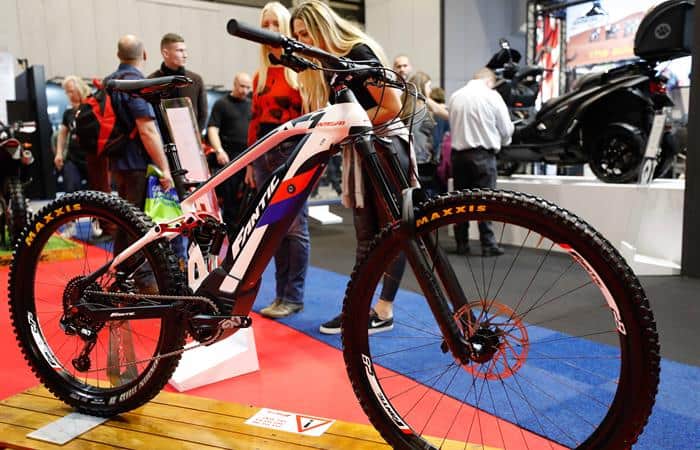 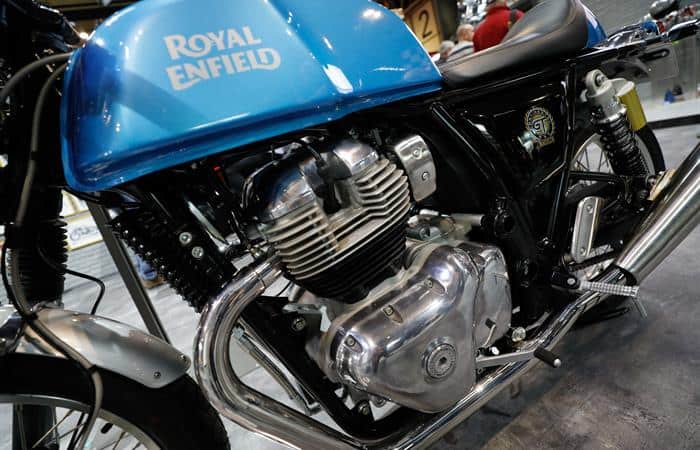 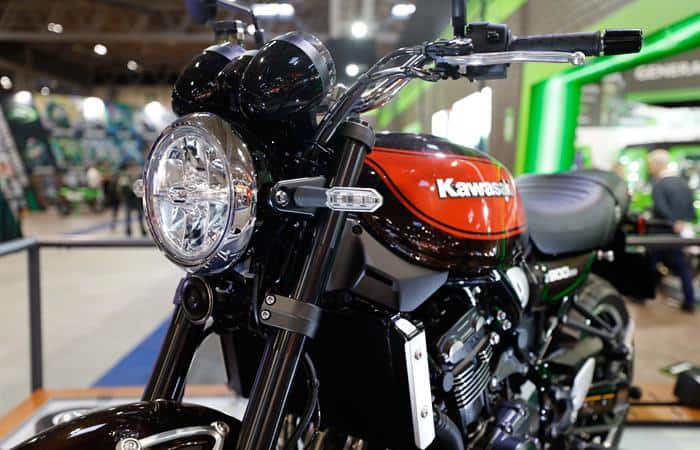