Up to the point where Clint flipped his brand new BMW R 1250 GS Rallye TE/HP into the Manx hedge he’d looked very impressive. And to be fair, that flip was pretty impressive too. Riding the KTM 1290 Super Adventure R (long termer) I’d been impressed just how easily Clint and his BMW had shadowed me around the first third of the Adventure Spec IoM 500 lap, on road and dirt.

Clint had obviously thought he had some speed to spare, so had sailed past me up this rocky two-track, but a momentary lapse of concentration – or just sheer bad luck – had seen the GS skid sideways then flip. Luckily for Clint he slid off uninjured, and even more luckily for him the GS (just a few hundred miles old) landed wheels-upwards in a super-cushioning hedge. But for one crack in the beak, the odd scrape and a broken indicator the GS sustained no damage. A lucky escape. Both Clint and the BMW continued as if nothing had happened, whipping along. For sure he’s a better rider than I, but equally his BMW had no issues with hanging with the mighty KTM despite the difference in claimed power outputs. On all accounts I was impressed.

After a season on the KTM 1290 I was then very happy to get a chance to sample an identical-to-Clint’s R 1250 GS Rallye TE/HP model (new in 2019) for myself while at the recent BMW Motorrad International GS Trophy Female Team Qualifier in Malaga. The TE sits pretty much at the top of the GS tree (Adventure models aside), being the top-spec of five variants the come to the UK, with upgraded ESA (electronic suspension adjustment) and DTC (dynamic traction control).

It would seem BMW has been canny. With super-stringent Euro 5 looming (01.01.2020) and with their adv-opposition having been calling bragging rights over max horsepower numbers, BMW dealt with both annoyances in the one upgrade. They didn’t actually trump the oppo’ on power – KTM’s 160hp 1290 is a tough one to better – but the hike from 123 to 136hp has at least put the BMW back in the frame for super-advs. Not that any adventure bike needs all this power, unless you’re given to racing Porsches along autobahns there’s no need for even 100hp – which is where Honda’s Africa Twin lives quite happily. But from a marketing perspective it obviously does no harm, more is more.

The extra power comes via a capacity increase (from 1170 to 1254cc) which in turn comes via a bore and stroke job (101x73mm up to 102.5x76mm). Added to this is a new camshaft setup, called Shift Cam, whereby one (gentle) cam lobe bears on the valves during low engine speeds and a second (more aggressive) cam lobe then moves in once the engine starts to really sing. This must help with emissions testing as well, as combined with some clever ECU mapping you can imagine both low- and high-speed performance and emissions must be well optimised.

The latest update also brings a new TFT screen (in full colour, and with Connectivity) to the entire GS range, and full LED lighting. Not to mention – given the now de rigueur IMU – such perks as hill start assist, and a new one on us: dynamic brake control, where the bike shuts the throttle for you during heavy braking.

I’ve ridden many GSs. The 650s (Funduro through to Sertão), the 800s, the 1150, the first 1200, then the TU 110hp twin cam upgraded 1200, then each of the water boxers. They are like ‘home’. And at first glance these 1200/1250s are a stately home at that, given their sheer size and the high number of fancy add-ons. To the uninitiated they look improbable motorcycles, for touring let alone off-road.

The 1250 GS is then much like its predecessor. The frame and chassis are pretty much unchanged for the new model, so it should feel the same. And while there’s more power, the hike hasn’t dramatically changed the characteristics of that power. Like GSs before, you get a good wallop of everything from bottom end to top. Actually, early 1200GSs – from 2004-09 – didn’t have the top end, the 2010 twin cam motor changed that. The subsequent 2013-onwards Water Boxers (water-cooled GSs) added to that top end hit. This latest, 1250 GS, just adds yet more.

It’s actually very impressive just how strong this motor is – give it full throttle and it is fully fast, like a road racer, you cannot imagine needing any more. It feels the equal to the KTM 1290 – honestly, only by back-to-back testing (drag racing?) would you be able to measure the difference. Like others, I found it impossible to detect the operation of the Shift Cam, the motor is as smooth as it is powerful and there’s no sudden change or lurch as the GS swaps in a micro-instant from one cam lobe to the next. Damn clever.

Somebody somewhere once said power is nothing without control (sounds very RUST), and that’s never been more true than with super-advs. And it’s here that there’s this unique ace-card only the GS can play – it’s that Boxer motor. Even in this super-sized offering it has something of an effect like a tightrope walker’s pole, it balances the bike – perhaps more than that, it keeps the centre of mass and all the reciprocating parts low down, so that most of the 249kg must be around your ankles rather than immediately under your crotch, as it seems with other bikes. Having come from the KTM, that shift in CoG feels very apparent. The KTM is tall and with that V-twin motor everything is up high. On the GS, while the saddle height is similar, everything else is low (an effect KTM has looked to achieve with the pannier tank equipped 790 Adventure). And so the motor is there very much helping you in managing that weight and the 136hp on tap. Kind of like a co-pilot.

And that is why social media is inundated with flash herberts doing feet-up skids and power slides on big GSs – because it’s so damn simple. Your kid sister – never been on a bike before – could power slide a 1250GS within minutes of being familiarised with throttle-clutch control. Somewhere between the innate balance the boxer engine brings and the clever, careful measuring of available power, the GS is a surprisingly easy bike to ride. And it’s this balance which helps make it such an effective off-roader (ruts permitting).

Bombing around a quarry near Malaga on this latest 1250 GS I was again struck by just how user-friendly the GS is off-road. It flatters your skills. Only it probably pays not to get too cocky. We were doing some panning shots for the photography, looking to kick up some dust for dramatic effect, and by heck could that 1250 motor punch it out. It fair roared and I doubt there’s a tyre yet made that could survive more than a dozen or so such passes – this beast shreds. You could also launch yourself into a world of extreme pain if you let such behaviour go to your head. Some 250-kilos is way too much to have barrel rolling beside you down a trail (ask Clint). So while the GS is just the most awesome experience when it comes to skids (brake and power) it’s as well to be mindful especially as the going gets lumpy. And it’s just as well that the GS’s ABS brakes and well-balanced suspension package keep everything mostly under control. 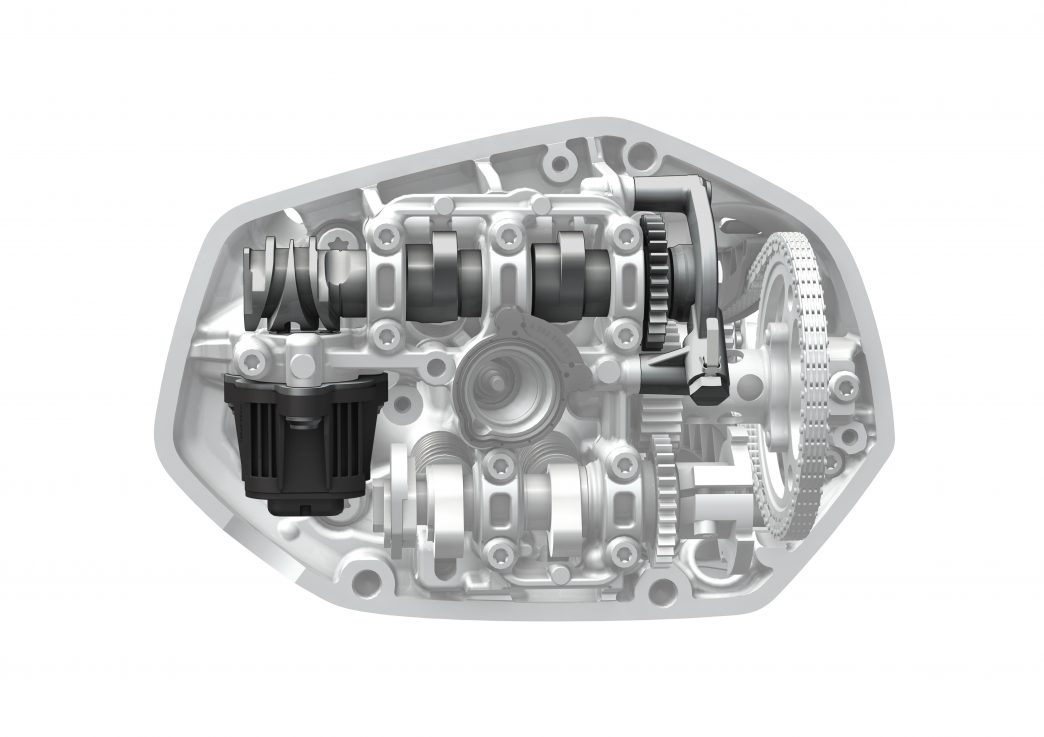 Like the most demonic poker player ever, the 1250 GS just keeps laying down aces. First ace: it’s got road race power. Second: it’s got super-light handling (for its size). Third: it’s great off-road. But it has a fourth and final ace, too: it tours sublimely. Somehow, that same seated-standing position that works so well off-road (wide bars, lowish enduro pegs, narrow mid section, flat highish seat), also works for comfortable touring. And if the rallye saddle on the HP model isn’t comfortable enough – and it’s not half bad – then you can opt for BMW’s usual two-part saddle which is super-plush for both rider and pillion. The fairing offers good protection, too – even with the mini screen spec’d for the HP. And there’s ample room for an integrated pannier set to be attached. For two-up touring in comfort it is so hard to beat. Obviously on this test I didn’t fully explore the range and comfort, but there’s no denying the cockpit is roomy and well appointed.

I like BMW’s electronics, too. That it offers modes that you immediately understand and can quickly access help. I even like the quickshifter on the BMW which works seamlessly. BMW really does have a good handle on the electronics, they were into this tech early, and it shows.

Arguably there was no call to make the 1250. Well, there was in so much as the GS – like every other bike new off the production line in 2020 – needed to satisfy Euro 5. But from a competition standpoint, the 1200 GS was doing just fine. But as ever, these incremental improvements do all add to the package and not only shore-up it’s position as the number one super-adv, but edge it forwards again.

A season on the KTM 1290 Super Adventure R has led to an appreciation of KTM’s adv-ethos. It’s damn sporty, it’s got a fair helping of EXC in its DNA, it’s pukka off-road kit, and if you’re super-brave it can really boogie off-road. It is racier than the BMW, no question. Only I suspect that while the racy spec and demeanour is cool, it’s not what the majority of adventure riders are after. The rallying adventure riders maybe, but the touring adventure riders – and this looks to be the bigger market – don’t value the sporty advantages the KTM brings. The BMW is the better fit; it’s no more versatile I’d say, but a fair bit more comfortable and always, that superlative boxer engine prevails. The GS has been the super-adv king for going on 40 years, with this 1250 GS it’s going to continue to be for a fair time yet. 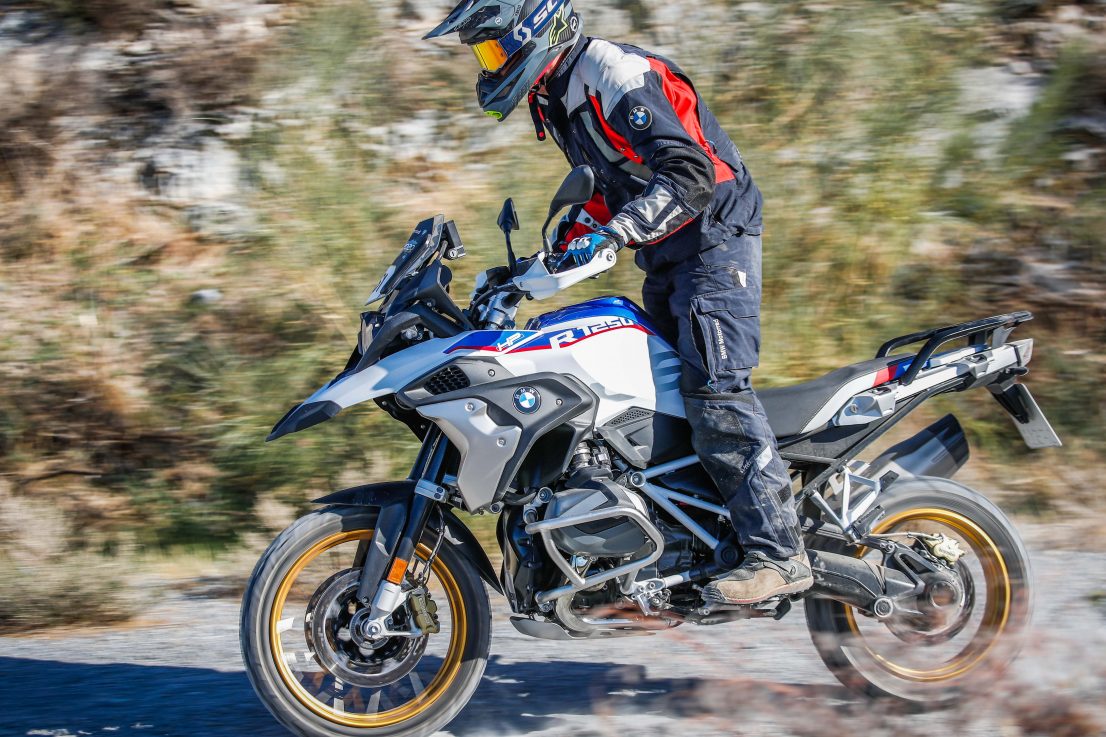 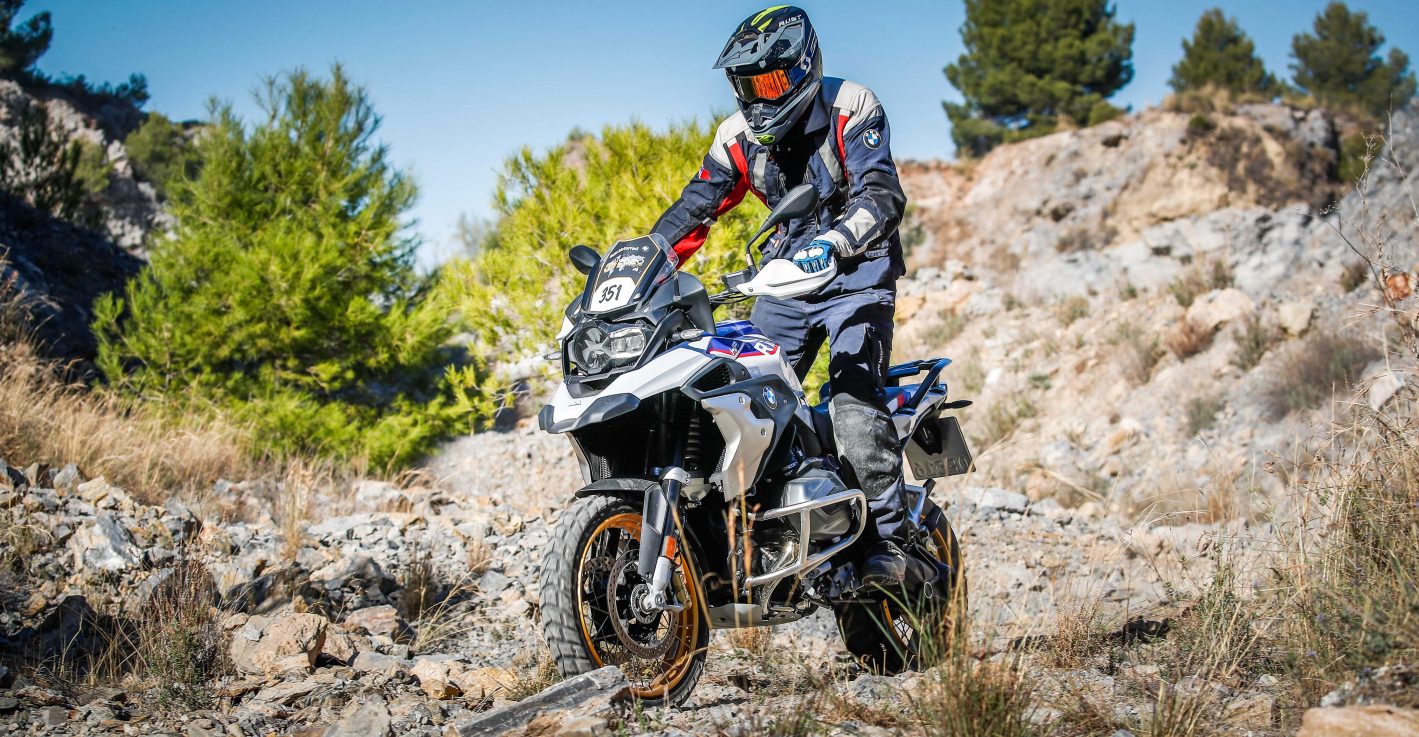 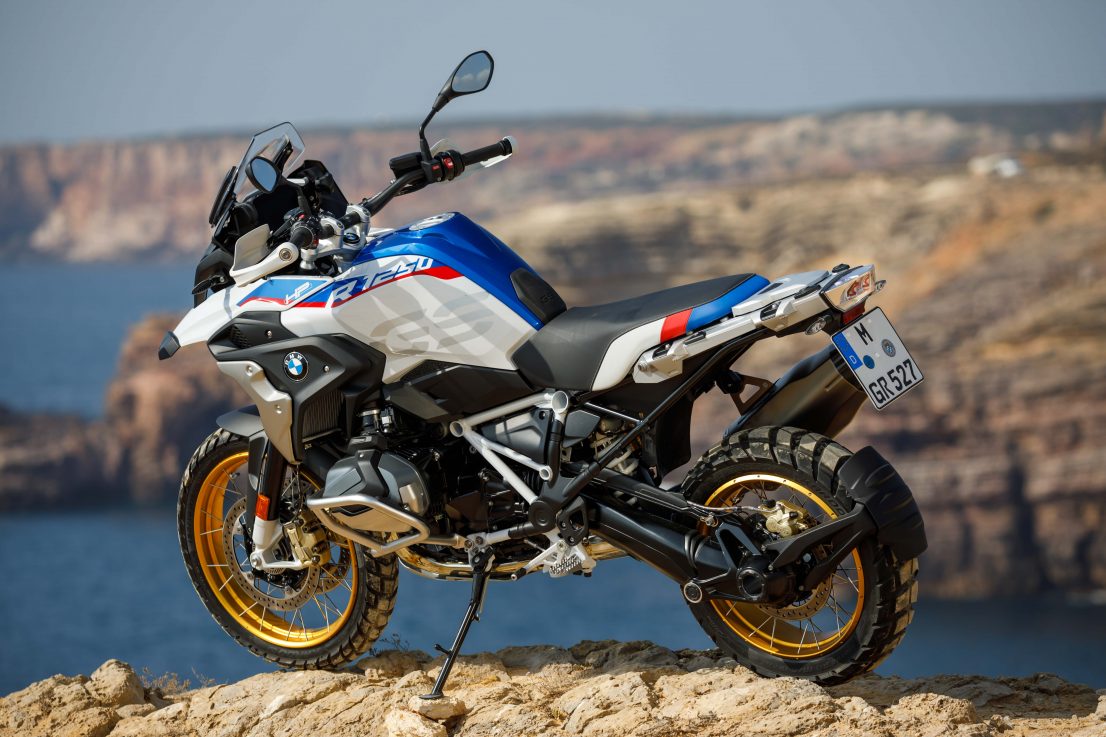 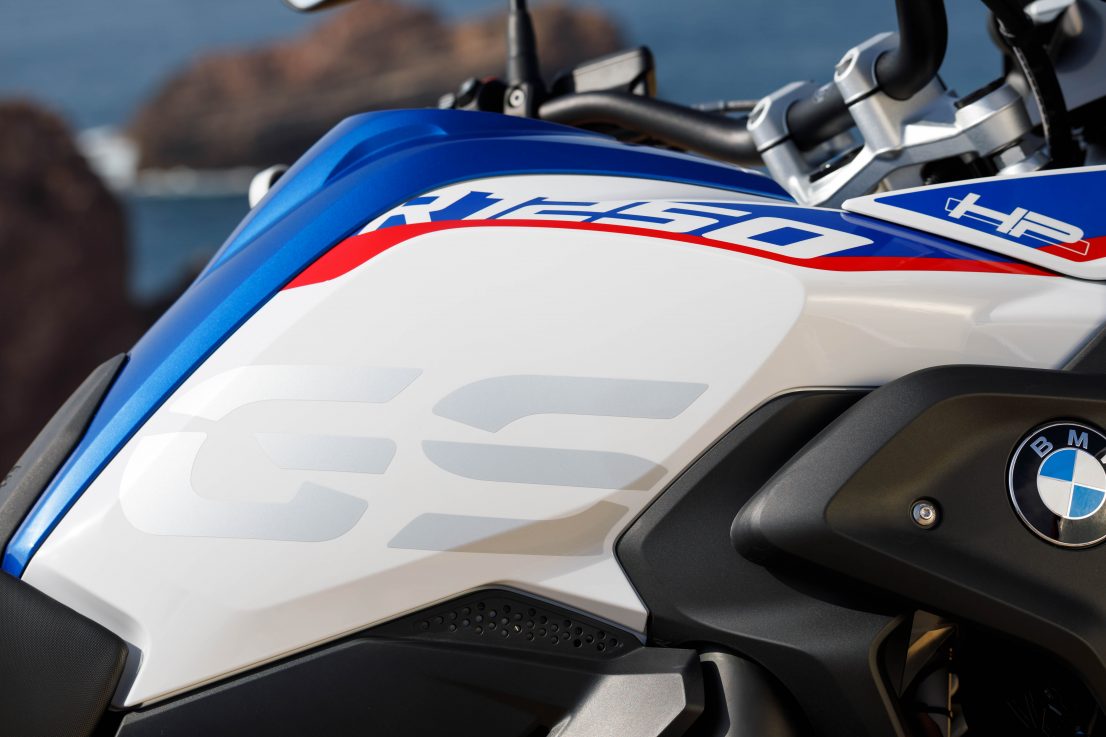 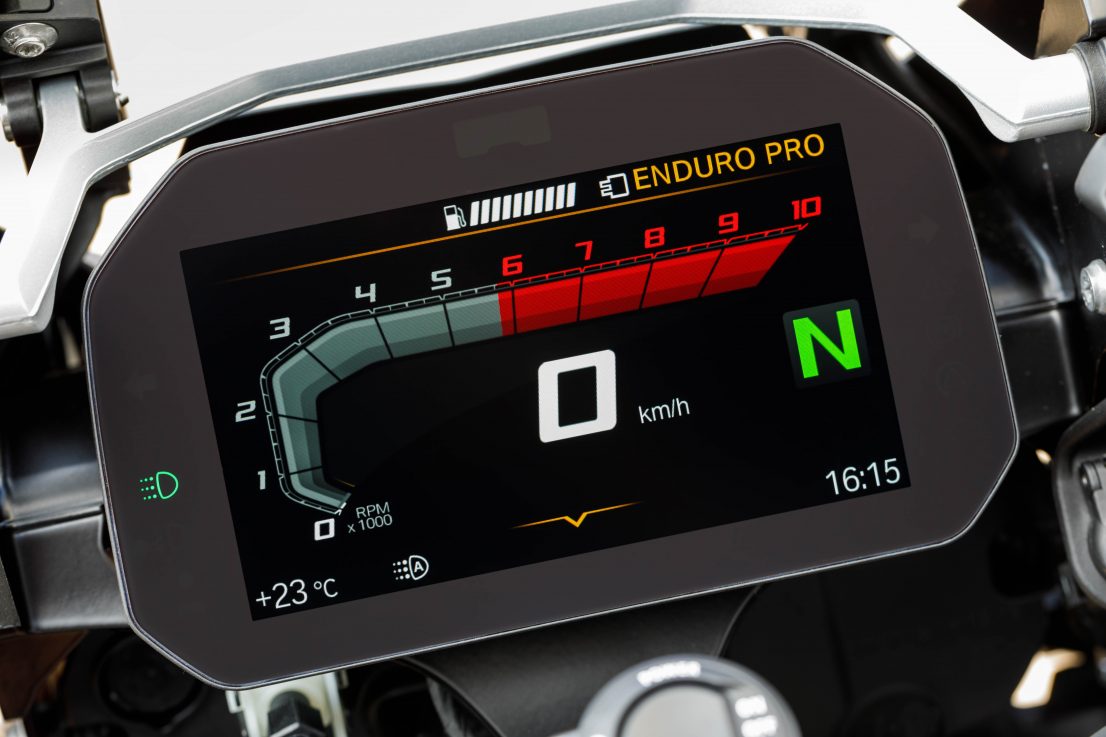