Around about November 2018 – contemplating Dakar 2020 – I had a muse through the Merzouga Rally website. I had my Husky FE450 sat downstairs. It was hardly gathering but after the Rallye du Maroc (see RUST #41) it was sat there without any real target. I’ve little need for a 450 enduro bike in the UK. I’m quite light and smooth and have always run smaller bikes. The nav system was still fitted up and aside from needing a fresh clutch it was ready to rock and roll. The Merzouga came at the end of March. Five months away. I wondered how much the entry was…

Two weeks later I was committed. With the Rallye du Maroc I already had my Dakar-qualifying Rally finish, but having spent a decent chunk of money preparing that FE450 I reasoned the more rallies it does, the cheaper it becomes – man maths (Cost/Rallye miles = cost per smile) (Not a typo).

So, the prep. Big issue here: the navigation system had changed from the Maroc-spec ERTF Unik system – which all of my repeaters and navi set up was geared for – to a Stella Evo system. I’m not sure what the decision process was behind this, but to have to replace circa £800’s worth of gear and start again after just one rally was not a good start, plus of course all the wiring and set up needed to go with it. This was a set back, and a laborious task.

The regs for the enduro bike class (I was entered in) also called for the original headlight and number board to be retained, and prohibited the use of a navigation tower – which is fine, only it’s a big ask to get all that gear on a standard (looking) bike without the potential to chafe wires, hoses, cables etc. And for it to look nice too – it’s important this.

Imagine having a problem in the desert and having a taped together rats’ nest of cables and mess. I’ve seen other riders with this problem, and having plenty of experience in engineering and racing I know this is not a good plan. I’m proud that I had zero mechanicals on my Maroc ride – not one loose bolt or one stray wire. Except that one I pinged out when cartwheeling the thing… 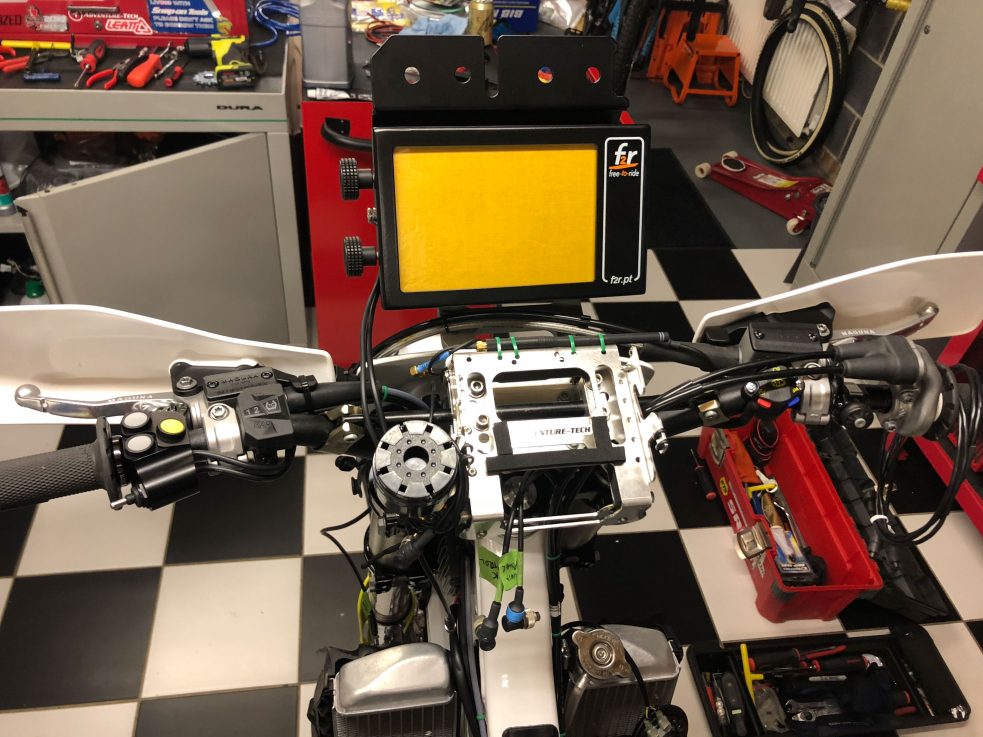 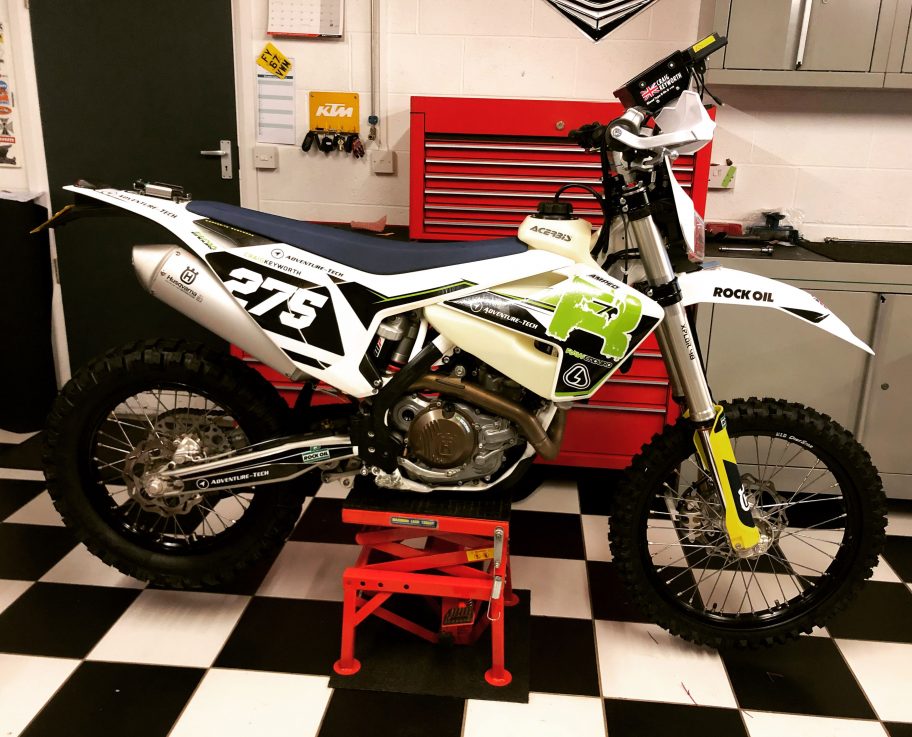 I had a rubbish time in the prologue, in all senses of the word. It’s easy to look at my social media and arrive at the conclusion that I’m riding bikes every day, jetting off about the place and that I’m handsomely sponsored, a lottery winner or have inherited a good slug of old money. I’m disappointed to reveal that none of these are the case. I’d likely be even more of a tit if they were! I’ve worked hard, incredibly so, and have taken pretty much every opportunity in my career to ‘get on’. Mrs 275 also. Because of this commitment to work, I’ve a terrible rep’ for being late for all of the lads’ holidays, mountain biking and general riding. I miss or am late for birthdays, weddings, funerals. In my professional life the opposite is true, and I’ve prioritised my time accordingly pretty much as long as I’ve known my mates and (now) wife. So I get away with it, aside from the grief, and manage to juggle it mostly by running for the odd flight, or as was recently reminded, spending the odd night on an airport bench.

The point is you have to MAKE the time work for you. Pack it in. There’s only 24 hours in my day too, less really as I need a decent amount of sleep as I’m grossly inefficient at shutting down – like those annoying pc updates. There’s always something that pops up when I’m trying to shut down.

Anyway, as I say I had a rubbish time in the prologue. Since the Rally du Maroc I’d actually had very little bike time. I was straight back into work and playing both catch up and look ahead from there on. Merzouga came along very quickly, I’d not even seen a beach in the meantime, let alone ridden sand…

So I was nowhere near riding at my best and the rubbish prologue result put me in a foul mood. Given that Maroc was my first rally and I’d come away with a trophy (third rookie – I probably never mentioned this before…) as well as a top 30 overall spot, I’d arrived at Merzouga with fire in my belly and I wanted a podium. I was focussed on the Enduro class top three and hungry for success. I had to reason with myself: it’s okay, it’s just the prologue, there’s a long tough week ahead. 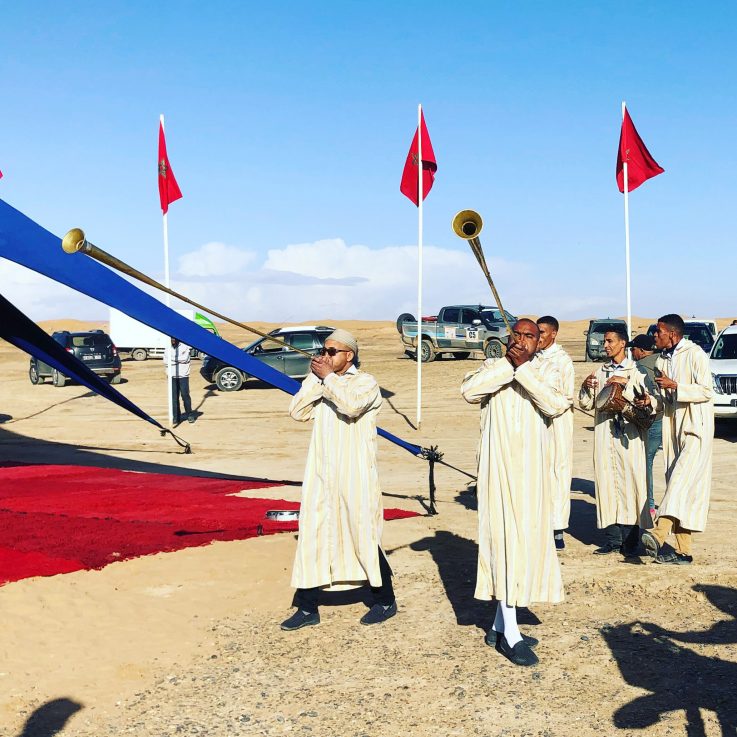 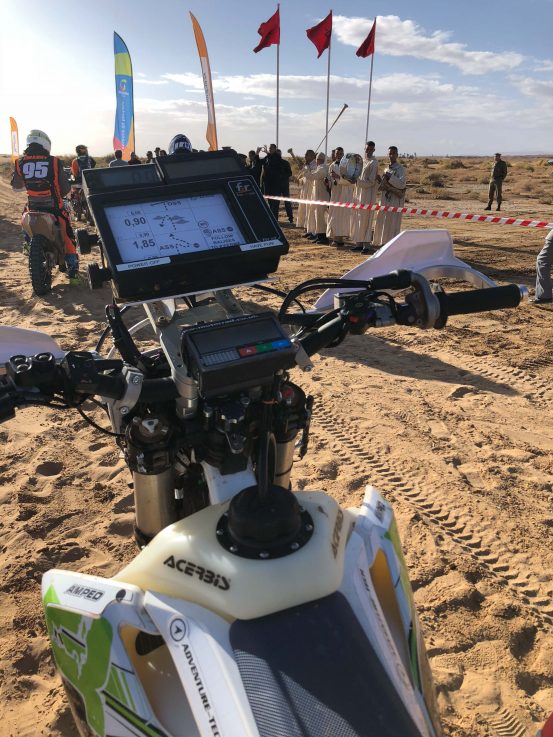 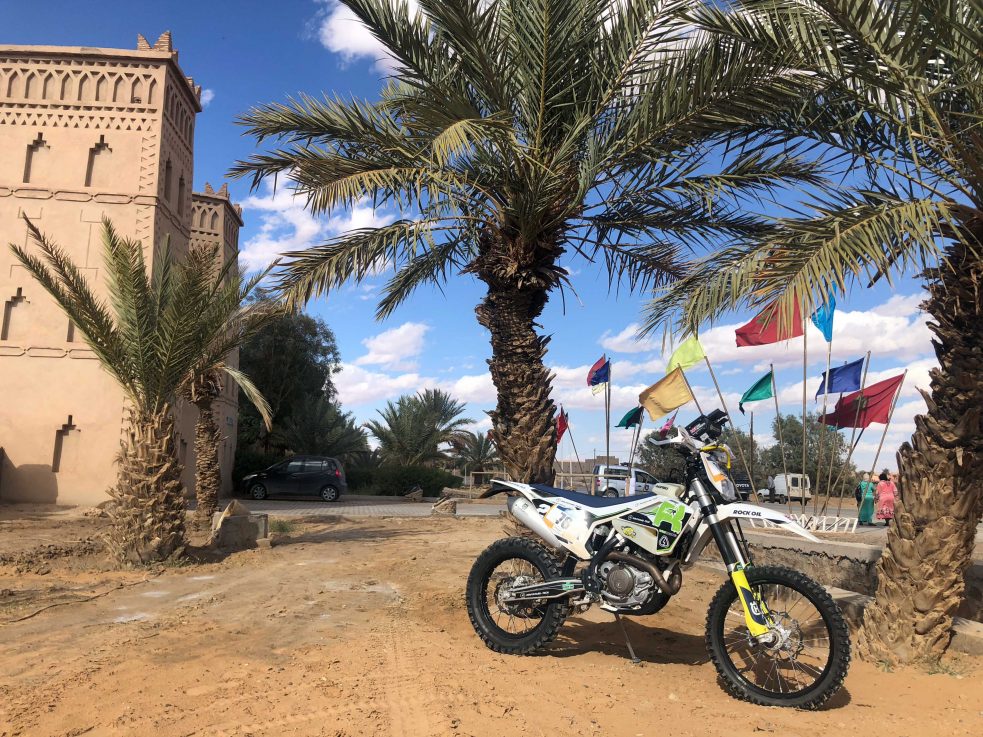 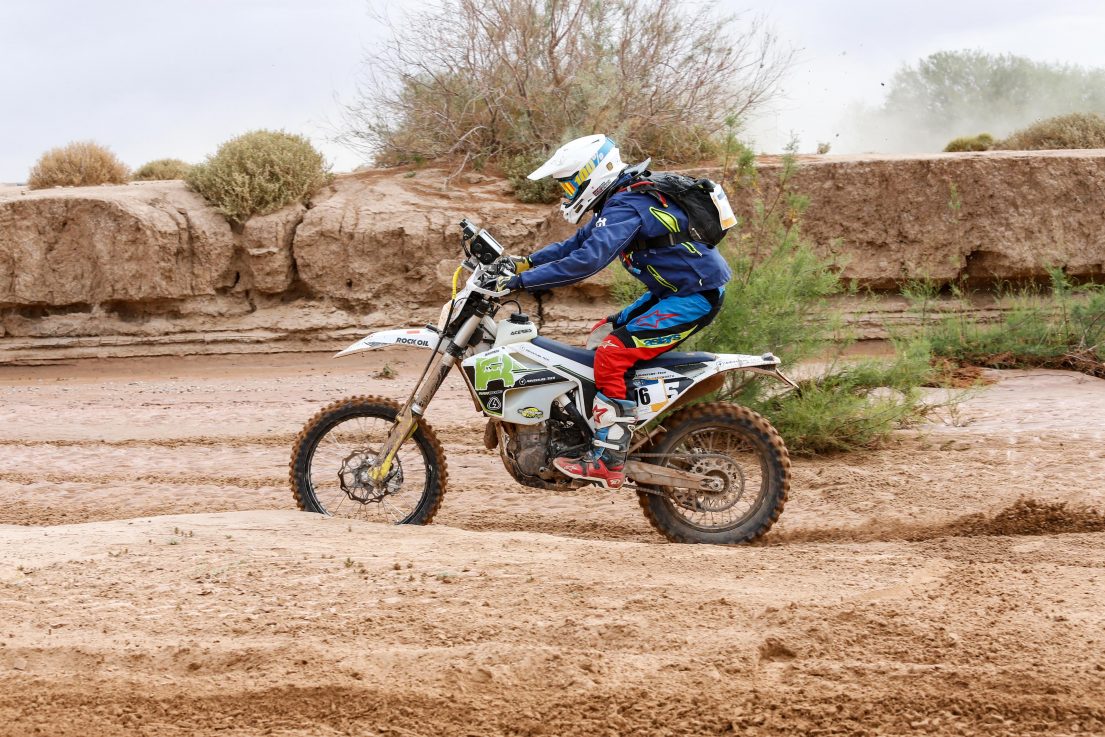 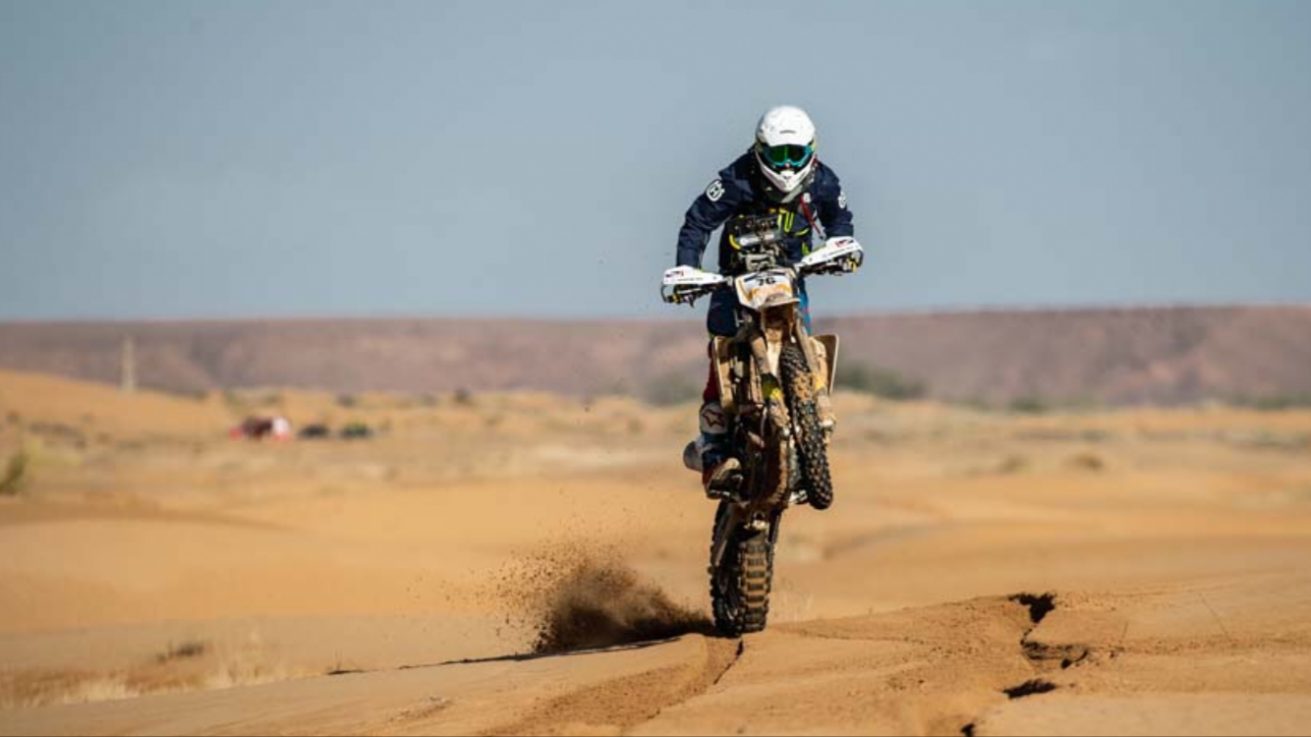 Day one and we just wanted to be underway. I was keen to get back into the swing of it. Despite the massively ugly long-range tank on the FE450, the bike felt keen too. We were off. And then we were not. Quite quickly after the start I was not really getting much GPS action.

Here’s how it works. We use the road books first and foremost, all of our turn-by-turn directions are read from the scroll of paper, but when we approach a Way Point Marker (WPM), the organiser’s-provided GPS unit – up until then silent – will come alive. Once within a set distance, typically about 800m, a little heading arrow will pop up, you ride at the arrow, the unit ‘collects’ the WPM and then the arrow disappears again. You tot up another waypoint on your sequential counter and you know you’re on the right track.

Only mine didn’t. It never even picked up the control speed limits on the way to the stage. I had an issue. This issue continued all day. By chance I found a GPS control car and had a chat with them about it. They wiggled things about, tried to reprogram and generally had a conversation with themselves (in Spanish) and shrugged. Balls. They advised me to crack on and they’d sort it later. I wasn’t here to be a tourist though. And pushing without the GPS validation was hard work.

So Day 1 was not going great either. Fortunately I fell in with Simon Hewitt (who’s also riding Dakar 2020 – #126) and let him know my issue; so we rode together and I used his GPS validation points where I could. Later, the organisation used my co-ordinates from my personal GPS unit – a secondary system carried on your person in case you wonder off without your bike – and overlaid it, meaning I didn’t get any penalties at least (except one for speeding…). They spent a good few hours on my system that evening and changed it out for the next day. 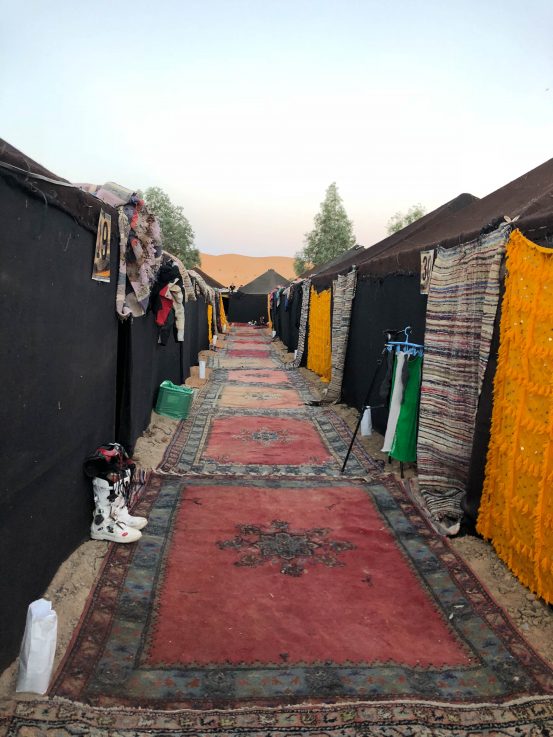 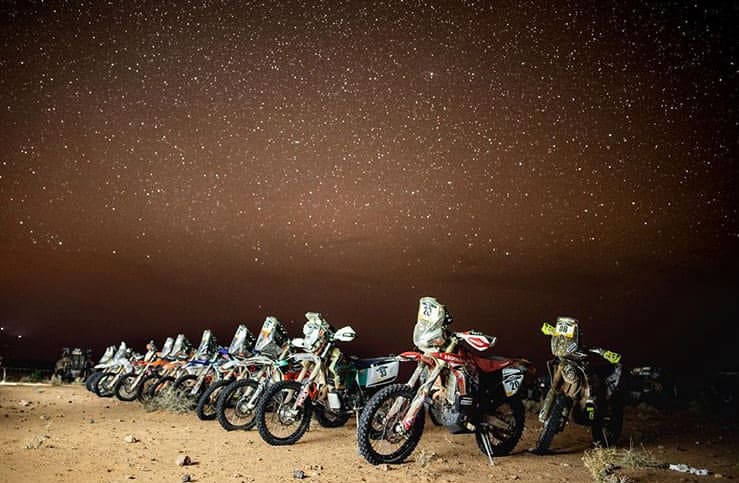 Day two was the same. I was pissed off. I actually spent 20 minutes doing a massive loop after lunch to try and get back to the GPS car to remonstrate. I tried my best to be understanding, given that I’ve worked in development and I know these things happen. I don’t think I was that good at this, but I was polite, and they were very apologetic. At this point Mick Extance (who’s partnering me in Dakar 2020 – #90, but was in the Merzouga helping another UK rider) came and gave me a bit of a bollocking for riding like a dickhead and told me to calm down. He was right, I was wound up. And riding like a dickhead.

I’d resigned myself to being a tourist. I’d had a chat with myself (and another with Mick!) and decided to stop being an arse and to enjoy myself. I’d arrived with the focus and drive to try for a position and I’d let myself get sucked into the believing my own hype at the expense of what riding is all about. Riding. Enjoying life. Messing about on bikes. We’re not curing cancer or digging wells for villages here. It’s just playtime. And so it came that I went out for a bit of a giggle in the Sahara and to play out in some of the most amazing scenery you could ever ride a bike in. And then the pace went up. And up. And up. 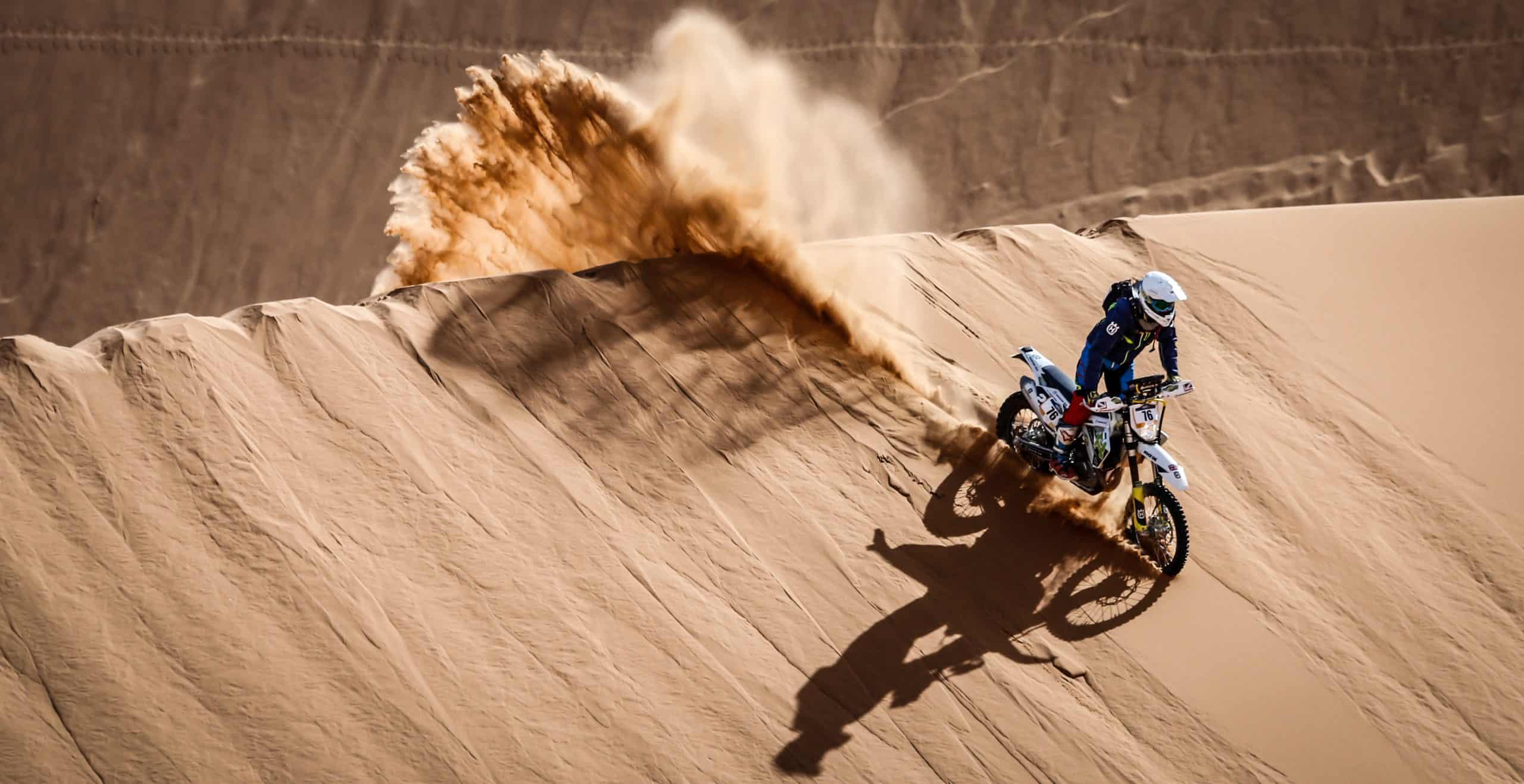 After five days I finished just shy of that podium – with the results showing me fifth Enduro (28th overall).

There’s a tale of how I’d had an amazing day on a bike, which led to another – day two of the marathon stage where we camped in the desert, and caught up with a South African rider Taye Perry (also at Dakar – #120). She’s rapid, and up for a bit of the same kind of fun I was having on the bike. (Get out of the gutter). We bounced off each other all afternoon, to the point where, ‘quite quickly’ we found ourselves hitting things, like river crossings and canyons, somewhat quicker than we might have done otherwise. Taye had her own issues in the week, too, so we were simply out there for the sport.

These are the best days I have on bikes. I know I was loose, but loving it. Dangerous territory, but I was back in the game. You can’t push your luck like this every time you ride, but when you do… Ooosh. 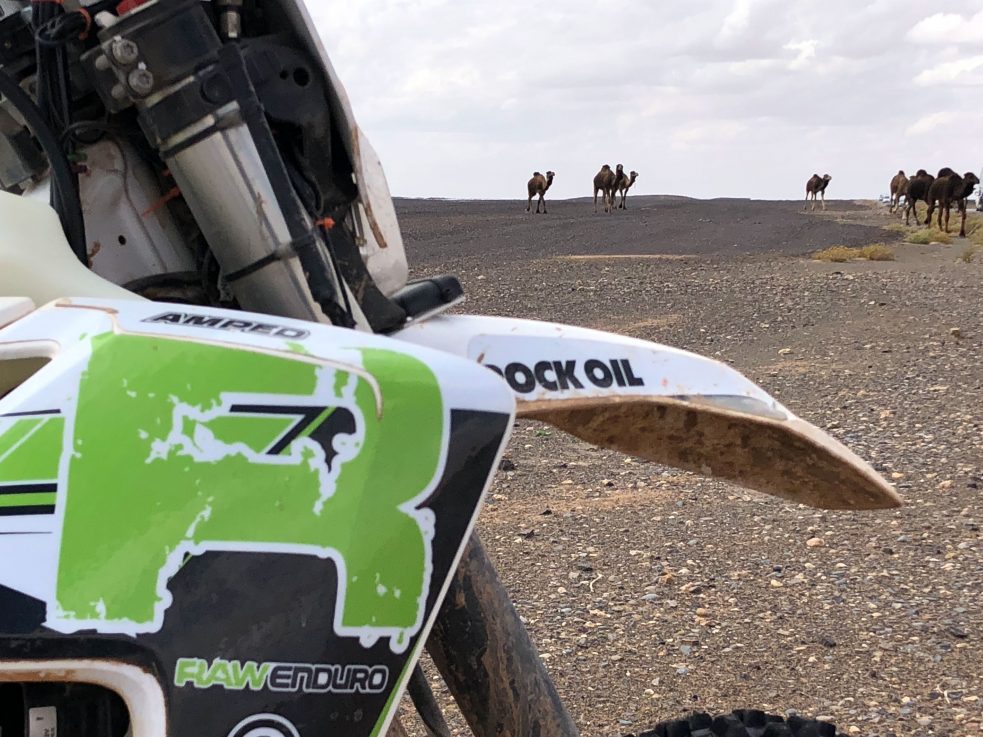 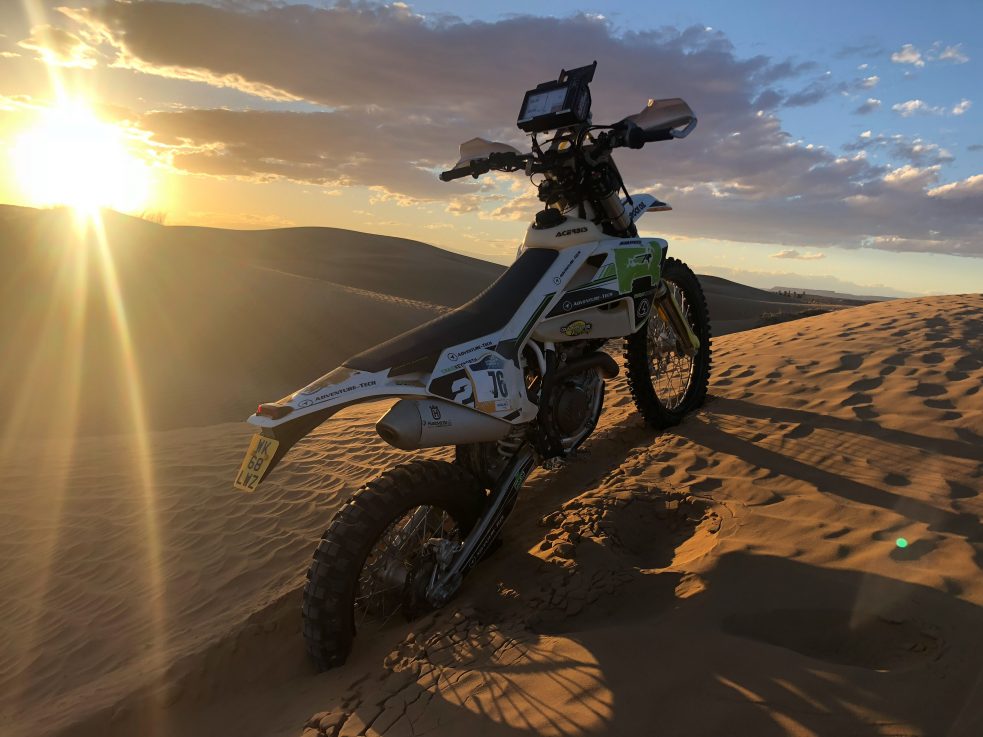