Honda brought the CB1100 to the market in 2013. Very nice it was too, a neat homage to their four-cylinder heritage – although it failed to illicit much excitement. So for 2017 Honda reassessed the market and came back with not one new CB1100 but two, which each attack the heritage market in far more defined way. CBs with attitude…?

I’m enjoying this bike too much. Warren’s enjoying his too, and wearing the broadest smile to prove it. The daft thing is we’re both lost and way behind schedule, so we should be stressing. But these Honda CB1100s have such a cool vibe and are purring along so sweetly they’ve melted any angst. Choking East End London traffic – not an issue, just gently thread your way through the gaps, no fuss, no nonsense.
And when we finally get on the right road and hit the national speed limit signs, we open up the taps and the two CB11s fly. Not hyperspace fast, just old school roaring air-cooled four-cylinder four-stroke fast. Enough to drop any four-wheeler, but not so fast you fear for your life/sanity/license. And on a warm summers day, does it get any better than this? 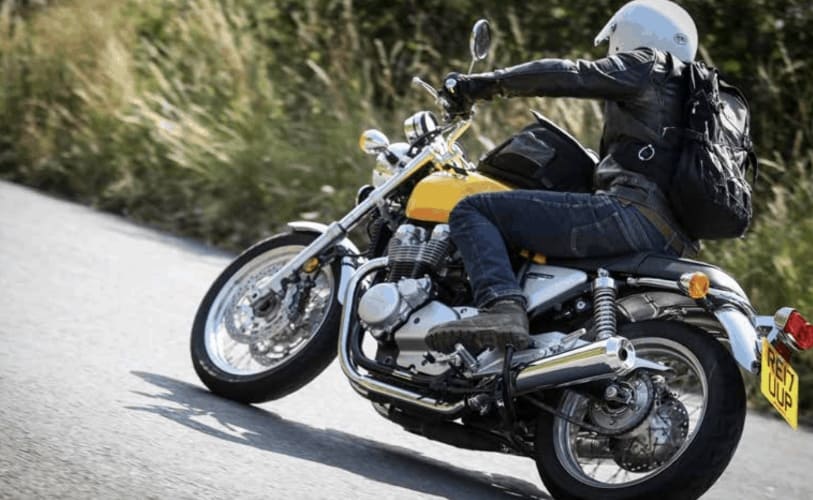 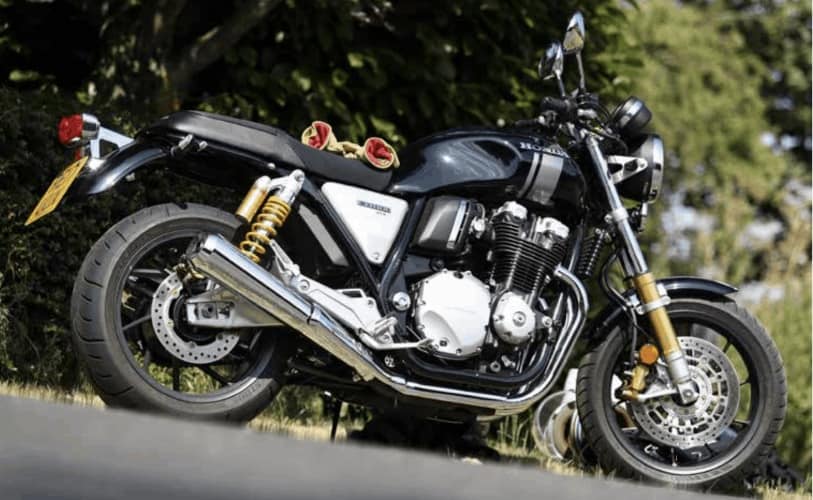 SLEEPERS
The daft thing here is that as impressive as these two CB11s are, they seem almost invisible to the bike-buying public (here in the UK at least). All the talk in modern-retro (aka heritage) circles is about the twins and Scramblers – by BMW, Ducati and Triumph – yet these CB11s are clearly stunning bikes, boy do they deliver.
Now given they are seemingly invisible it is probably best we do a recap on just what they are. The first CB1100 of this ilk arrived in 2013 and was of course paying homage to the original CB750 (which dates back to 1969). The CB11 was entirely its own machine, not a parts-bin special where the motor from a sportier model has been detuned and kind of reimagined (fake cylinder fining etc). No, the CB11 was a ground-up newbuild in every facet, executed with the usual Honda thoroughness and attention to detail. Bearing in mind that first CB750 produced a claimed 68hp, then the 88hp of the CB11 really is quite staggeringly modest, especially given nearly five decades of technological advancement. Instead the CB11 is something of a torquemonster compared to the old bike, producing 68 as against 44lb-ft. Only really, in modern terms, even that isn’t so much. And when we factor in a weight comparison – 226kg the CB750, 255kg the CB11 – you can see outright performance isn’t the driver here. And that’s just fine by us – and the rest of the heritage scene – because, we’ve said the word already – yep, in the words of Dennis Denuto (see The Castle) it’s the vibe (that matters). So the CB11 came to the market in 2013, and very nice it was too, applauded for having a very agreeable motor and fine handling (as long as you were not set on all-out road racing). Very Honda in that way. Only probably it was too nice, a very able roadster with a nod to the past, but arguably no one striking character trait, or vice for that matter. So it’s taken this 2017 revamp of the CB11 – and splitting its DNA to create two styling/dynamic options – to give the model a bit of swagger, a bit of character – and a whole lot more appeal.

MELLOW YELLOW You’re first option is the CB1100EX – the yellow one – which pushes the CB1100 design even more stridently into the past. The cast wheels of the 2013 bike are replaced with more period correct wire-spoke hoops, which are also close to period-correct in being 18-inchers in fairly modest widths (with just a 150-section tyre on the rear – the CB750 wore a 19”/18” combination and that rear tyre was a relatively skinny 4.00×18, say 100-110mm wide). The handlebars are high and wide the way they came back then while, like the tyres, the fuel tank would have been a bit of luxury back in the 70s, seeing as it has seamless welds and is quite curvaceous – in shape more resonant of Kawasaki’s Z1 than the CB – but we’re not complaining, it is indeed a thing of beauty. 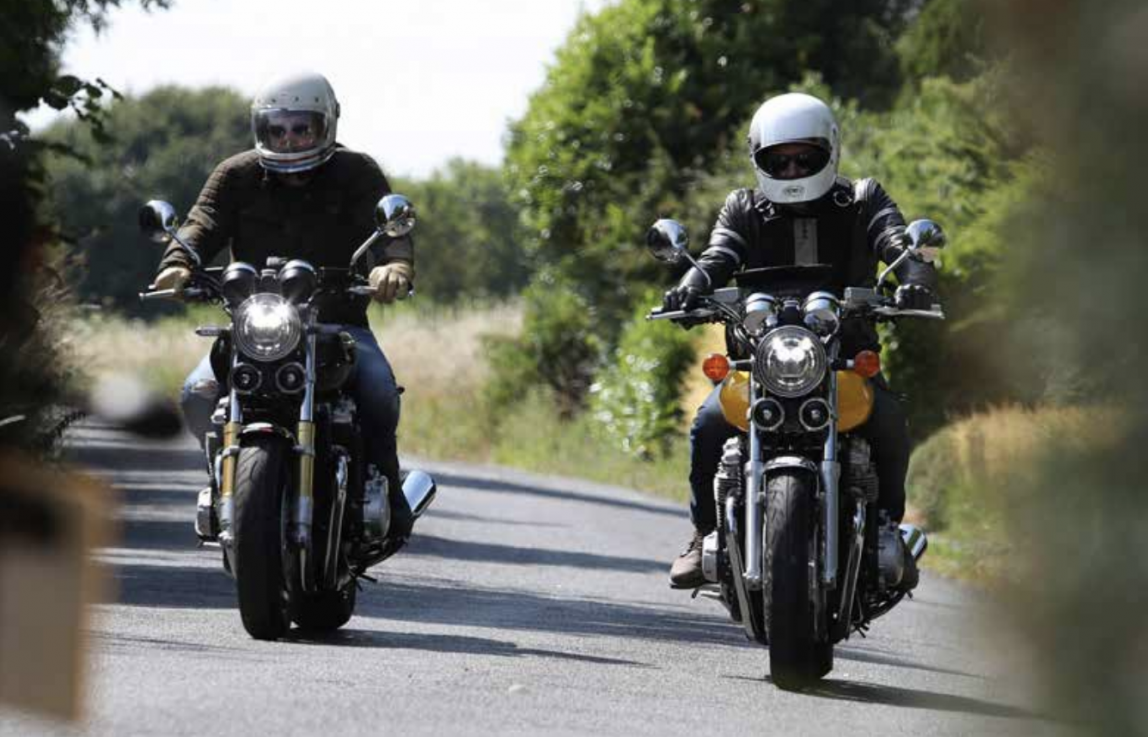 The exhaust system is also more period conscious, having been made shorter, and being a 4-into-2 is a little more correct than the bulky 4-into-1 fitted in 2013 (although the CB750 of course had a 4-into-4 exhaust, if you could describe it so). The exhaust is also emitting a little more of an emotive tune – still within legal limits, but with muffler alterations there’s more ‘resonance’ (Honda’s word). As well there’s been a lot more attention to detail, so the tail light looks properly 70s (did someone say ‘Lucas’?), the saddle is ribbed (let’s not go there), the brushed aluminium side panels and the chromeplated indictors all speak of authentic 70s styling. For us, the EX is the epitome of the 1970s CB750. 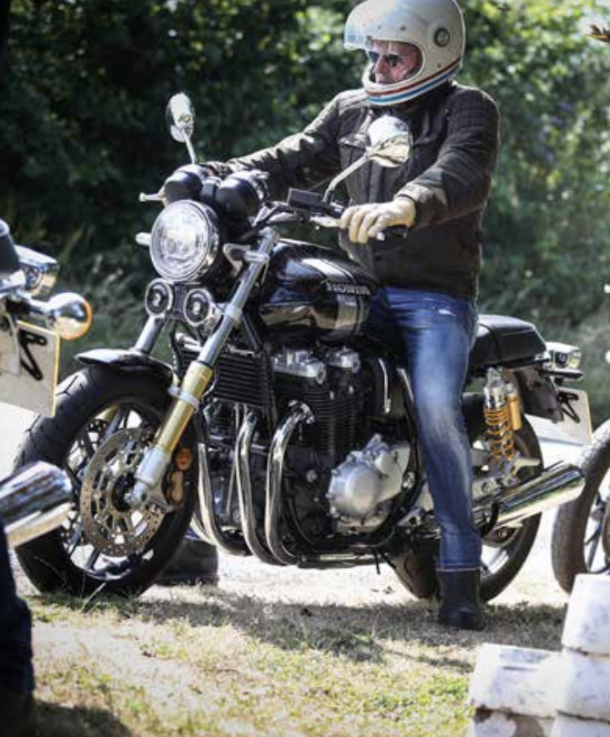 Option two is the CB1100RS. Maybe that should be FS not RS, as in Freddie Spencer, as there’s a fair dollop of 1980s AMA Superbike about this variation, bearing in mind Fast Freddie’s CB750F racer graced American circuits in 1980-81 (incidentally we’re talking the DOHC CB750/900Fs here, as against the SOHC motors of the ‘70s CBs). So, yes, with the RS we have cast wheels, fancy forks, fancy brakes (radiallymounted), a black-painted engine and straight bars. And those wheels are modern 17-inchers, with fat 120- and 180- section tyres. And just like AMA Superbikes of the 1980s, the frame has seen something of a racer’s cut and shut and bracing exercise, with a whole degree taken out of the fork rake (making the bike 5mm shorter). Again, so many details…

You can feel the shared DNA in the EX and RS, and given that the motor is in the same tune in both, you’re getting a very similar ride – up to a point. What could we say? For up to 65% of the ride they feel the same – namely the response when you open the throttle and the engine characteristic and sound – it’s smooth, almost plush in the way the power comes in, with no obvious power-step just one long linear response.

After that, the chassis changes and, for sure, the different handlebar bends dramatically change the attitude and ride experience of each.
Riding on the RS first, the feel was very much smooth, confident and strong. It’s not aggressive and the bike’s stature isn’t overwhelming, being as much reminiscent of the diminutive CB400/4 (which came with similar flattish ‘bars) as a mighty CB750 or CB900F. The seat height at 795mm makes for easy lowspeed maneuvering. It’s a relaxed ride, but you can tuck-in in a sportsman-like fashion when you want to kick along and with the sportier chassis set-up you can hang it out there a little longer than on the EX. It’s a roadster still, but with a definite sporty flavour.
But in fact it’s only when you jump on the EX that you realise just how much the RS is the racy one. On the EX the high handlebars, the lazier steering and those skinny-ish tyres create a far more chilled ride. And after at first rejecting such a setup (I’m a European bendswinging café racer, not a US highways cruiser) it really grows on you. There’s a little bit of dirt bike ‘chill’ about such a ride, and given that in heritage-land we’re not obsessed with speed, this vibe and this look start to make more and more sense.
As said, it’s the same motor in both (in fact oil and air-cooled). And it’s a great one. Velvety smooth, yet thanks to the exhaust tweaks, it makes a gruff howl and – just as with a rorty twin – there’s fun to be had with giving the CB11s a handful of throttle. With modest 32mm throttle bodies, the PGM-FI fuelling system offers instant, smooth response while the gearbox is utterly unfussy – and unlike the earliest CBs, comes with a six-speed gearbox, so it’s long-legged. And you have to like having a slipper clutch on board too, to smooth-out those moments when you downshift just one gear too many too soon. All this, and if you take the time to really look at it, you can see its beautifully executed with subtle detail in the cases and the cylinder fins.

YES, WE LIKE!
So there is indeed a new ‘old’ vibe with the CB1100s. They’re very different to all the other heritage models given the straight-four motor, but nonetheless authentic of the period and so just as valid. And while we don’t want to say this, as in heritage land this virtue has no value, the CB1100s bring a serving of practicality – yep, you could go on a long tour on these bikes, they’re not just for the cappuccino drinkers. In Europe, this puts us in mind of a mad blast down to the 24-hour race down at Bol d’Or as we did in the coupe d’endurance days. Such a trip (the length of France) could be a real pain on a lesser machine (ask Alex about the suspension on his Triumph) but the CB11s would eat up such a journey.
The CB11s can then foot it with the BMW RnineTs for having that extra bit of performance and substance – kind of super-heritage models. For character the Hondas and BMWs are as much chalk and cheese as they were in the 1970s, but both are honest to their marque and bring a rewarding ride experience. I (JB) get to ride a lot of classics (including CB750s and R90Ss) and unless those old bikes are fettled to within an inch of their lives they can be disappointing, and no question they need a keen mechanic for an owner.

Bikes like the CB1100s here bring back that 70s experience, rose-tint enhanced by way of modern technology, so you can enjoy the period ride without the threat of breakdown or imminent rebuild. And given the quality and attention to detail brought to these CB1100s they’re also to be respected and are certainly deserving of their place. Sometimes we use words like pastiche (very Kevin McCloud), or replica, and we’re being demeaning. But when the engineers have done as thorough a job as they have here – and installed the fun factor, and yes, the vibe – then we give these heritage models full marks. So these CB1100s – yeah nicely done, very nicely done indeed. 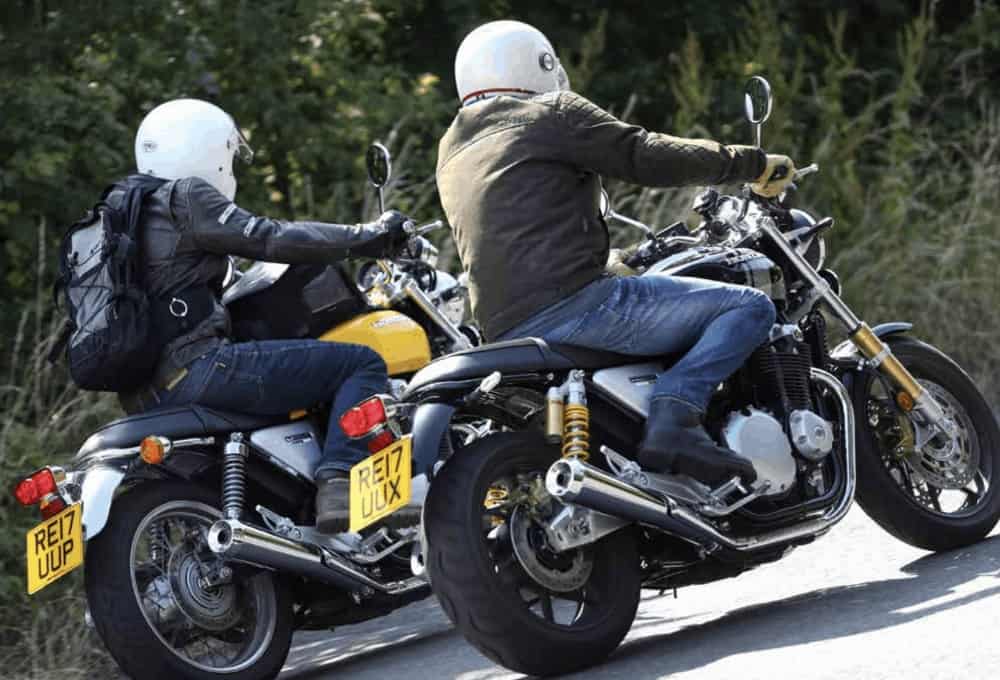 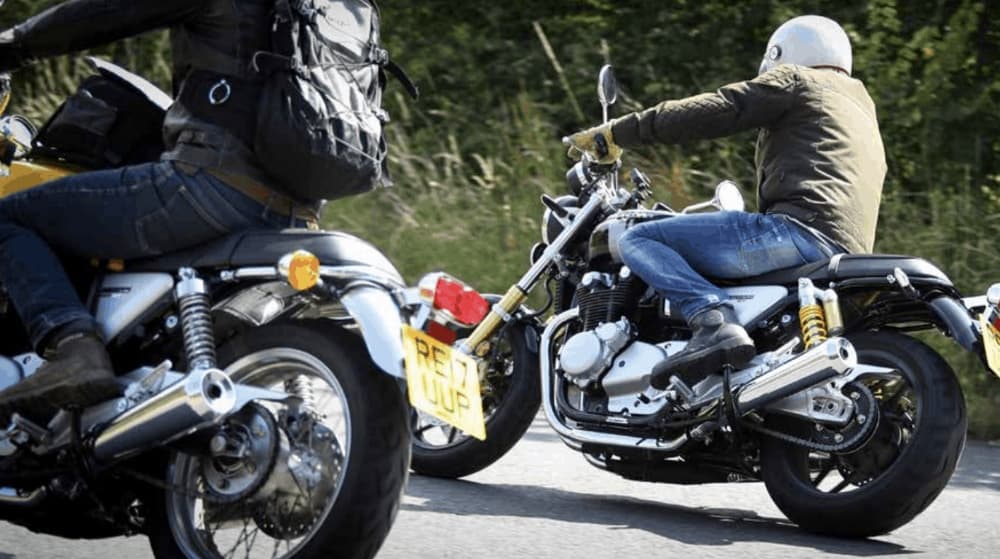 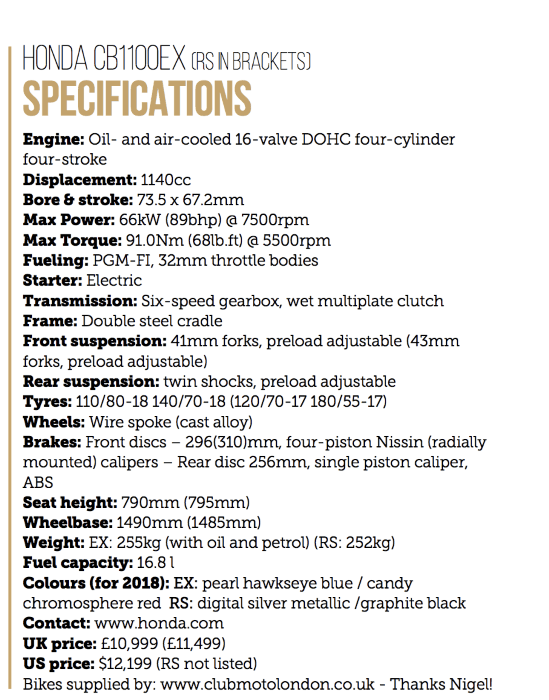