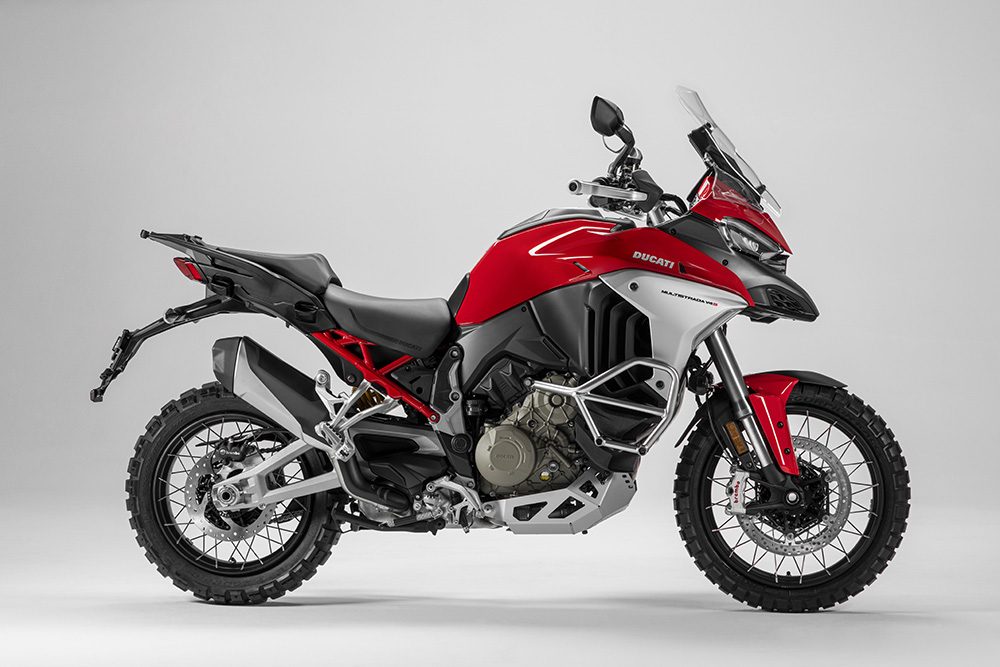 Ducati’s new – fourth generation– Multistrada is here. And as we know from the recent Granturismo V4 engine reveal, it’s a 170hp wonder. The news here is that huge horsepower is matched by a huge amount of tech to make this one of the most comprehensively – almost exhaustively – spec’d bike in the sector. It is, as you’d imagine, something of a tour de force.

This fourth generation comes some 18 years after the first Multistrada, and it’s worth remembering – as Ducati has in their press briefing – that multistrada means ‘many roads’ and so while it is these days considered something of an adventure bike, its origins come in the road sector, where it first brought together elements of sport, touring and urban – many roads, but not trails. It wasn’t until 2016 that Ducati added the adventure element to the brew when they brought out the Enduro variant which replaced the cast wheels with 19”/17” wire-spoked wheels and a whole host of dirt-relevant modifications.

In all those years the Multistrada was powered by a 90º vee-twin of various capacities and specs. But this fourth generation follows the marque’s transition into the V4 market – albeit the new 1158cc motor retains the (traditional?) 90º vee angle. At 170hp the motor is 14hp up on the outgoing 1260 Multistrada twin and tops KTM’s 1290 Super Adventure R’s by 10hp, to be legitimately the most powerful in class.

While performance brings bragging rights, Ducati has been very keen to point out that durability and reliability have not been neglected; in fact the Multistrada sets new records in service limits. Oil changes come every 15,000km while valve checks are spaced at a staggering 60,000km interval. As their website suggests, you could circumnavigate the world without need to open up the rocker covers. And all this is backed up by a four year, unlimited mileage warranty. Pretty impressive, to say the least. 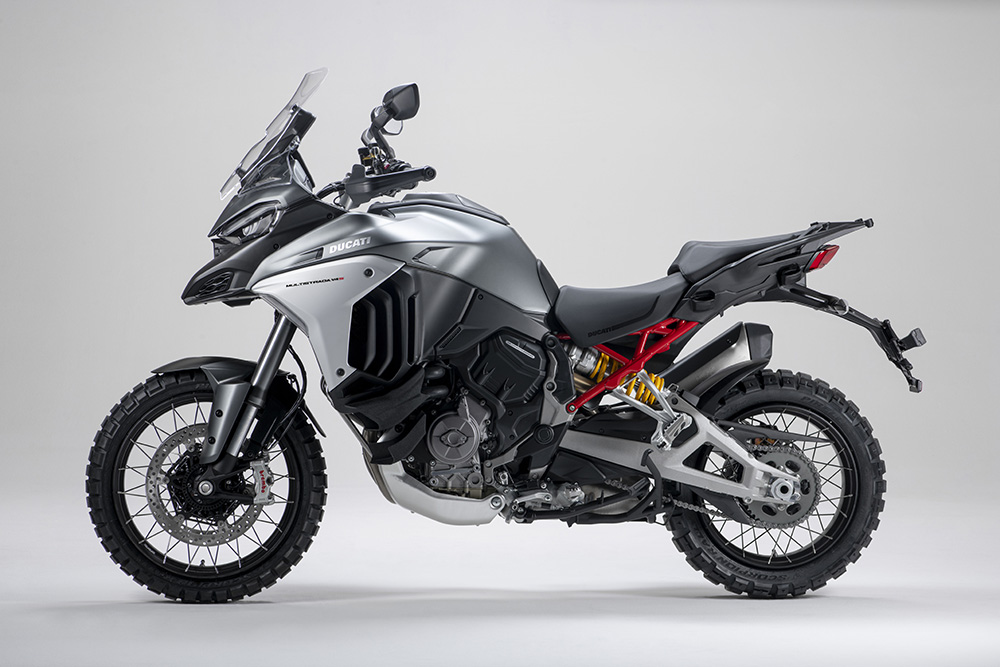 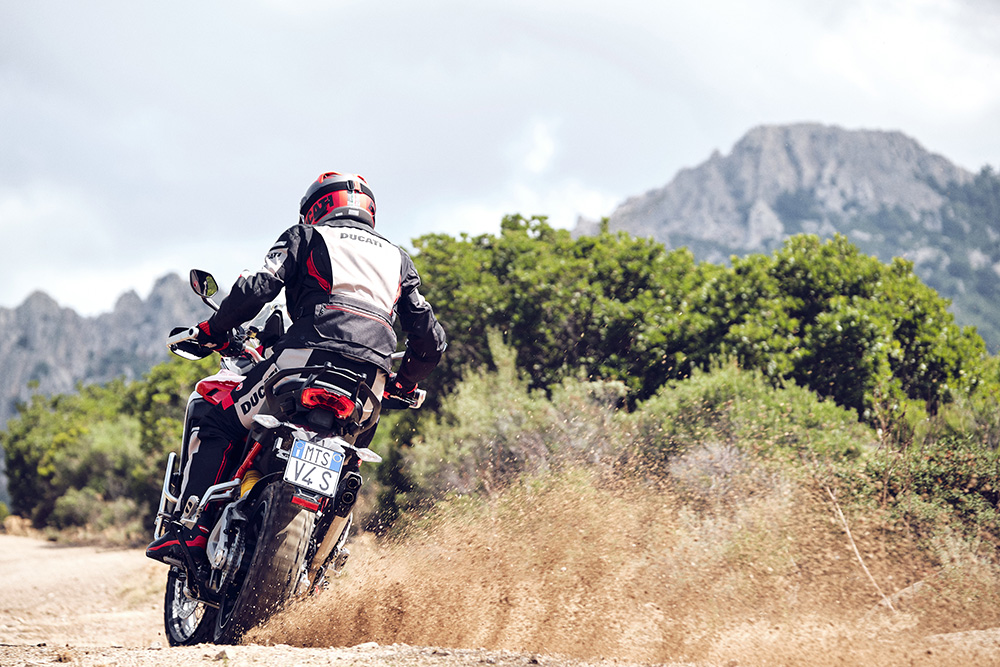 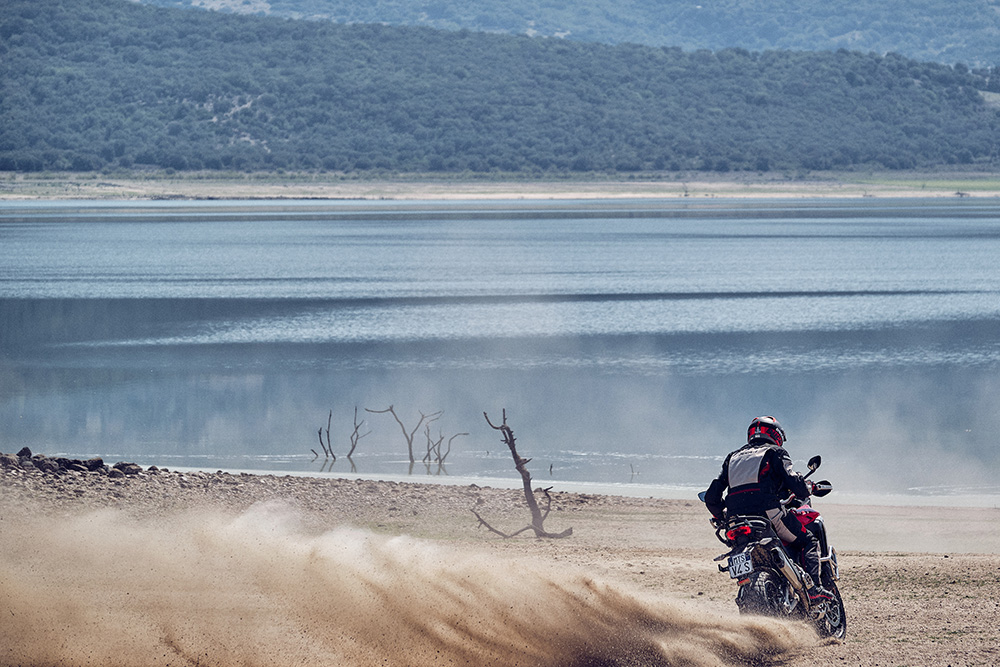 Now we – well, JB – were part of a party that took the first Multistrada Enduro (a prototype no less) on a hell-ride in Madagascar (back in 2016). Expected to be the weakest link in the party, that Ducati – with the exception of a flat battery one morning – actually proved reliable and resilient. It suffered multiple minor crunches yet remained entirely in tact and ­– except in sand, where the front had a tendency to tuck (hence the spills) – it was surprisingly dirt trail capable. In subsequent adventure rides in Europe that same bike proved something of a favourite and was often fought over when a BMW R 1200 GS was the alternative option. Expensive and trick the Ducati might have been, but it could, err, duke it out with the king (option to groan at this point).

CAN IT REALLY DO TRAILS?

So the Multistrada V4 has big boots to fill. Road riders might be dazzled by the motor and the horsepower claims, but adventure riders are going to be curious as to whether it can at least match its forebear on the trails.

One good aspect there is the claimed dry weight of 215kg which undercuts the mighty KTM 1290 SA R by 2kg and is well under the weight of a BMW R 1250 GS Adventure – so quite an achievement, and shows the engineers were keeping a sharp eye on the detail.

Equally, set against a long-long-long list of rider modes and aids, the new bike has a range of dirt-specific settings that should suit off-road very well. The suspension is medium-to-long travel, with 170mm travel in the beefy 50mm USD forks and 180mm from the shock (both units supplied by Marzocchi) – giving a ground clearance of 220mm. If you opt for the S model you also get an upgrade to Ducati Skyhook Suspension – which is semi-active (think along the lines of Honda’s standard Africa Twin and Adventure Sport variants where again the premium model gains semi-active suspension). 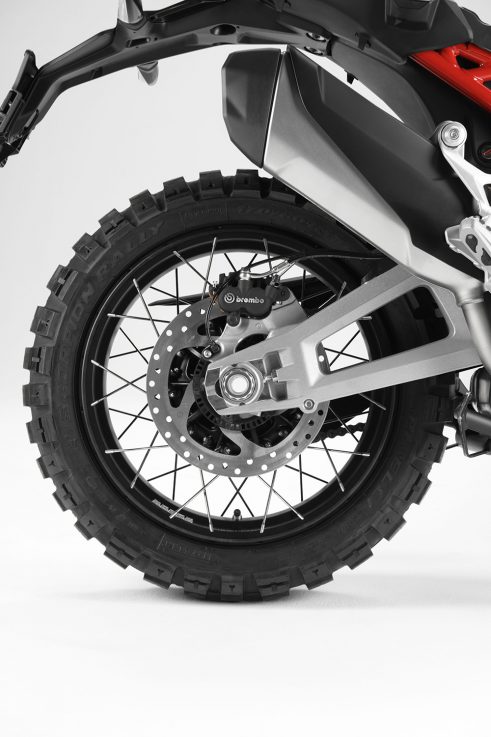 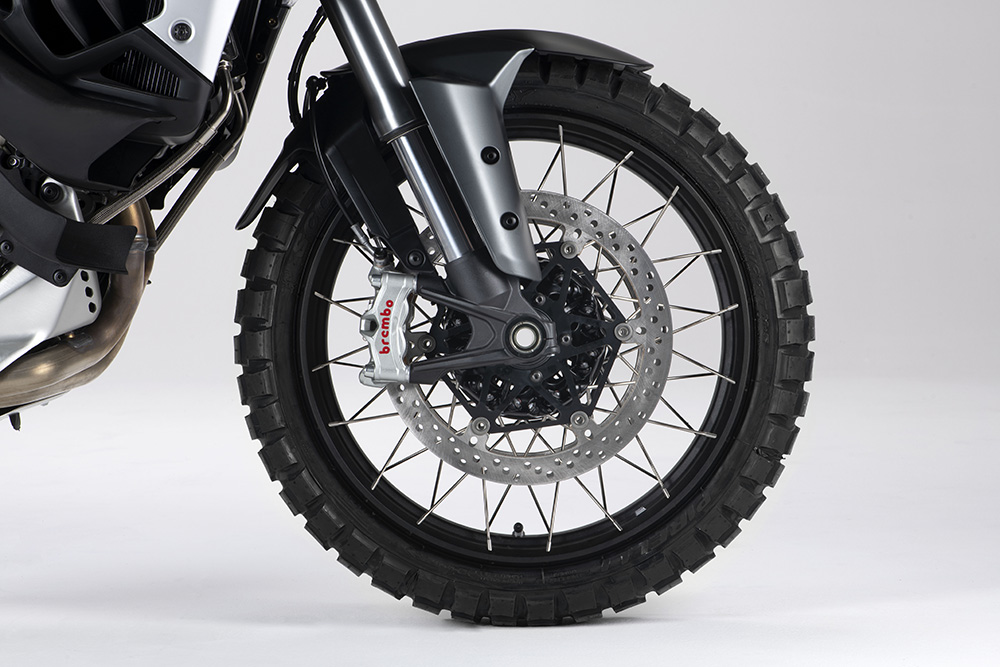 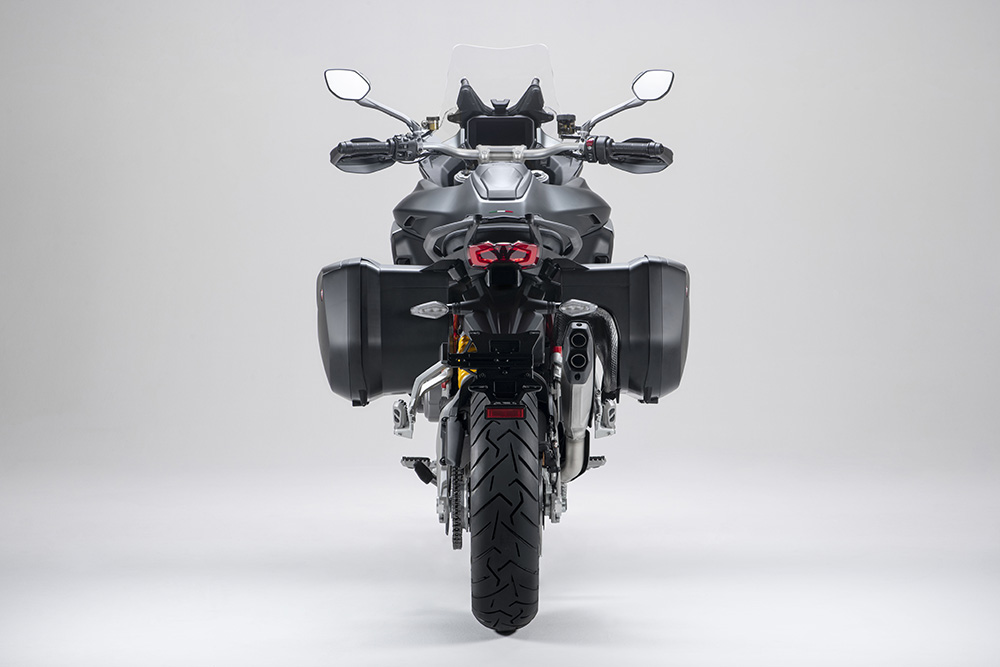 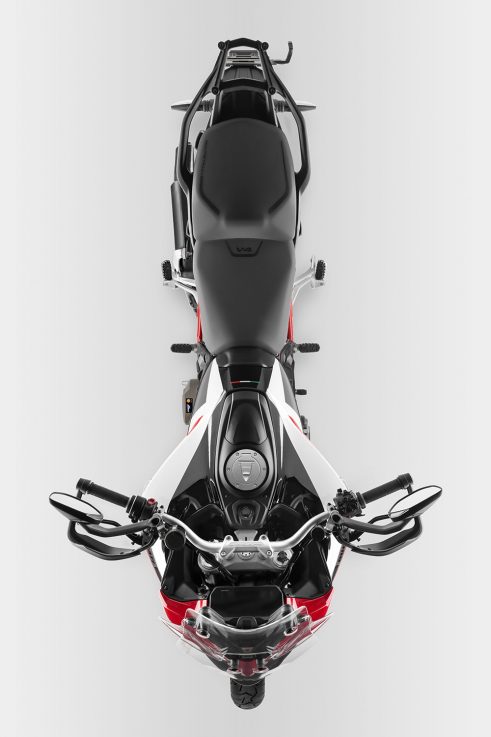 The frame is an aluminium monocoque – we need to see a picture of this – with separate subframe and a ‘lightweight trellis’ style swingarm. Steering head angle is 24.5º, which sounds a mite steep for an adventure bike, but we should reserve judgment on that. Seat height is adjustable to anywhere between 810 and 875 if you take low/high seat options or 840 and 860mm if you stick with the standard seat.

Where we can see adventure-specific thinking is the Enduro Riding Mode. This limits the power output to 115hp and in the S variant applies off-road settings to the semi-active suspension. Traction control and wheelie control settings are lowered and the ABS is set to level 1 which Ducati say is suitable for off-road low grip surfaces. Equally the system turns off the rear wheel lift detection, the cornering functionality (presumably relating to traction control and ABS) and ABS is disabled on the rear wheel. Furthermore both traction control and wheelie control come with eight levels of control, while yes, if you want ABS entirely off – front and rear – that is an option as well. 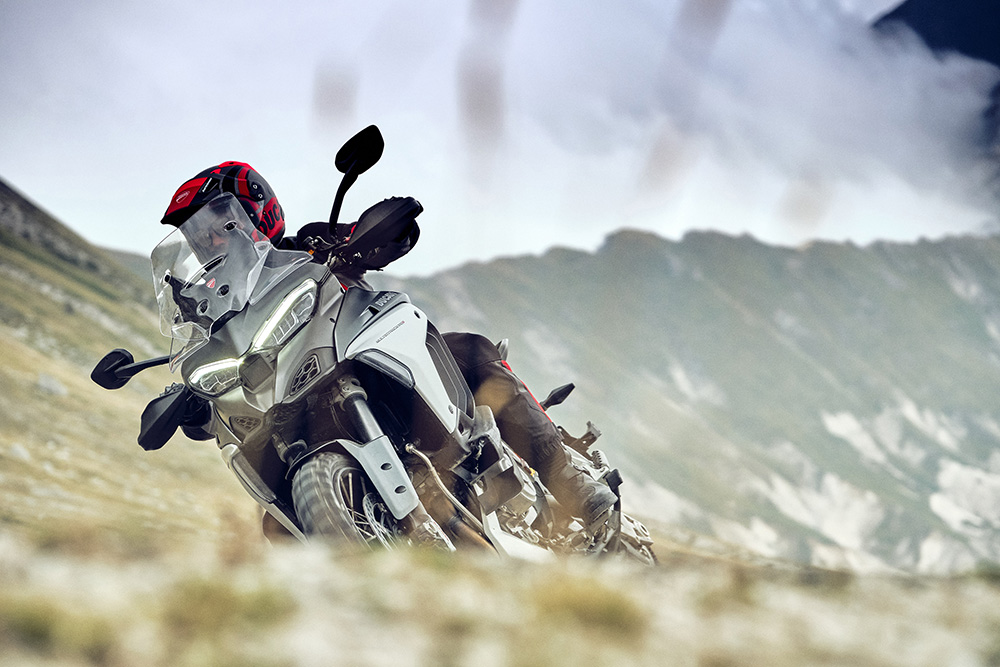 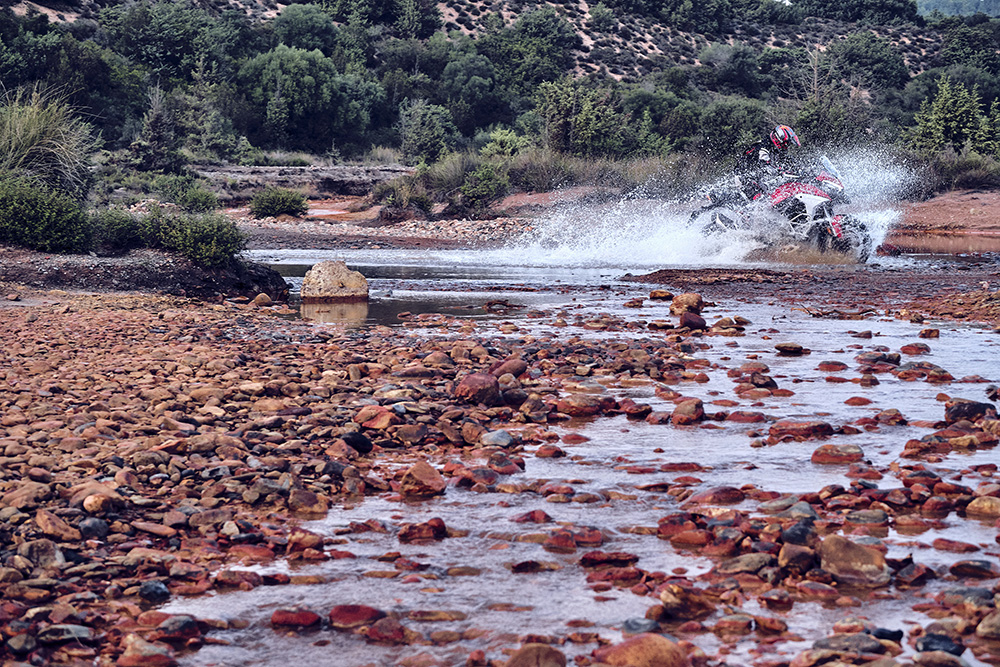 Road riders will be dazzled, maybe, by the adaptive cruise control, by the blind spot detection, probably by the vehicle hold control (useful when on a slope and having the entire 230kg payload all aboard), cornering ABS and traction control, not to mention the rear wheel lift detection (balancing the bike under hard braking) and S model’s auto leveling capability which reacts adjust the suspension to various load scenarios. Then there’s the 5” TFT screen on the base model and 6.5” TFT (with flash glass) screen on the S. Actually the S gets a fair few tricks, including quickshifter, better-spec front brakes and cornering-reactive headlights. Oh, and there’s an S Sport model, which gets an Akrapovic carbon fibre/titanium exhaust and carbon front guard.

But coming back to our adventure roots, we’re more impressed by the Enduro accessory pack, which fits the bike out with a radiator guard, crash bars and ‘supplementary’ LED lights.

Yep, top-of-the-line adventure bikes like these aren’t to everyone’s taste – and certainly not to everyone’s pockets/wallets – but they have a place and you can’t deny they do actually perform (as the stock photos show). And with this bike Ducati have certainly come up with an impressively designed and spec’d example. It’ll be interesting to see how it goes… 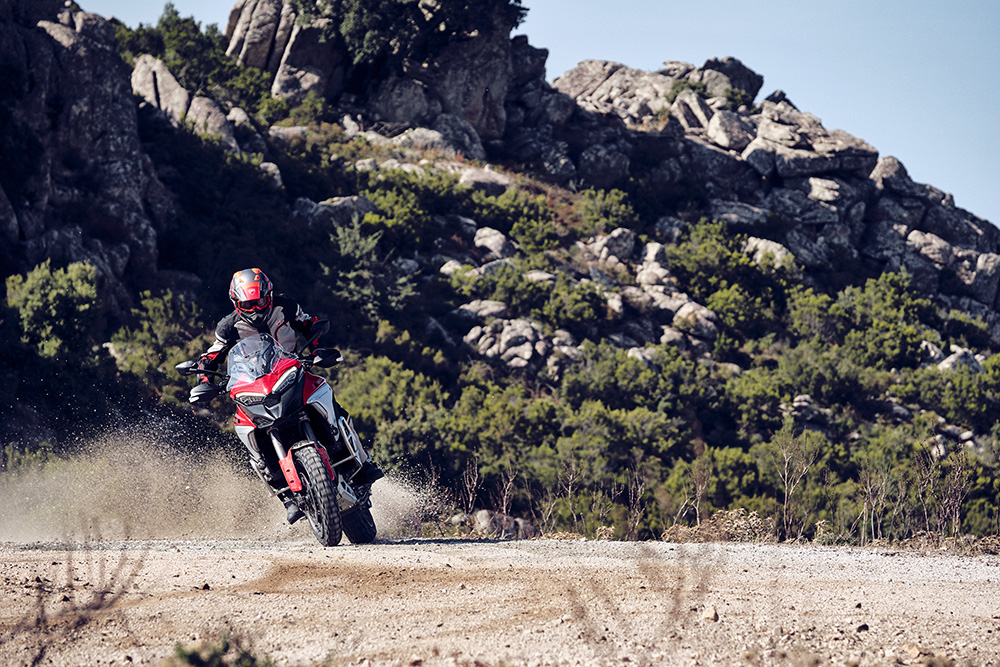 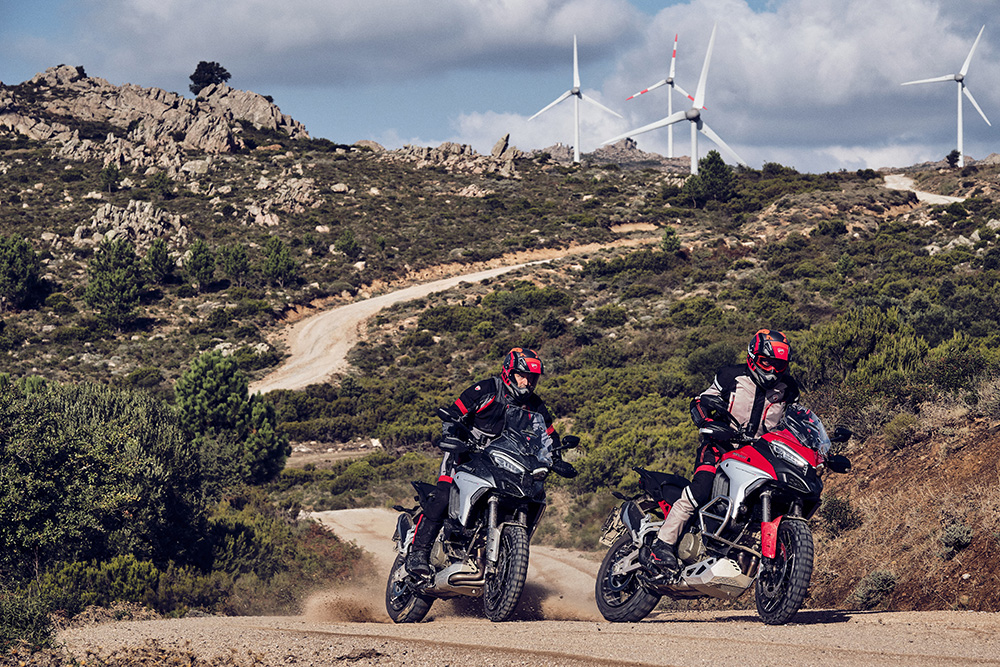 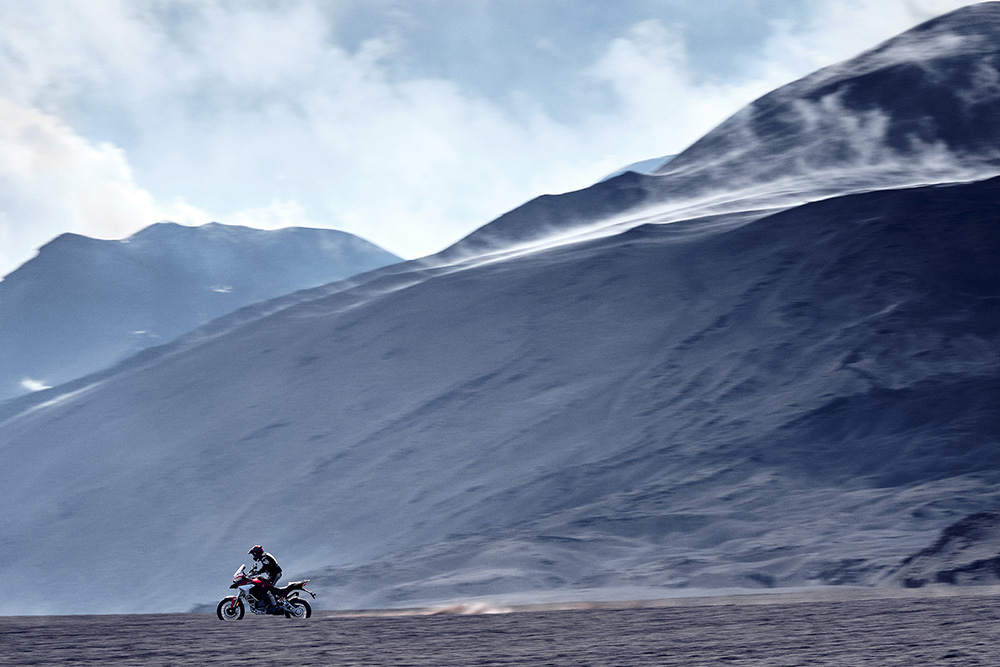 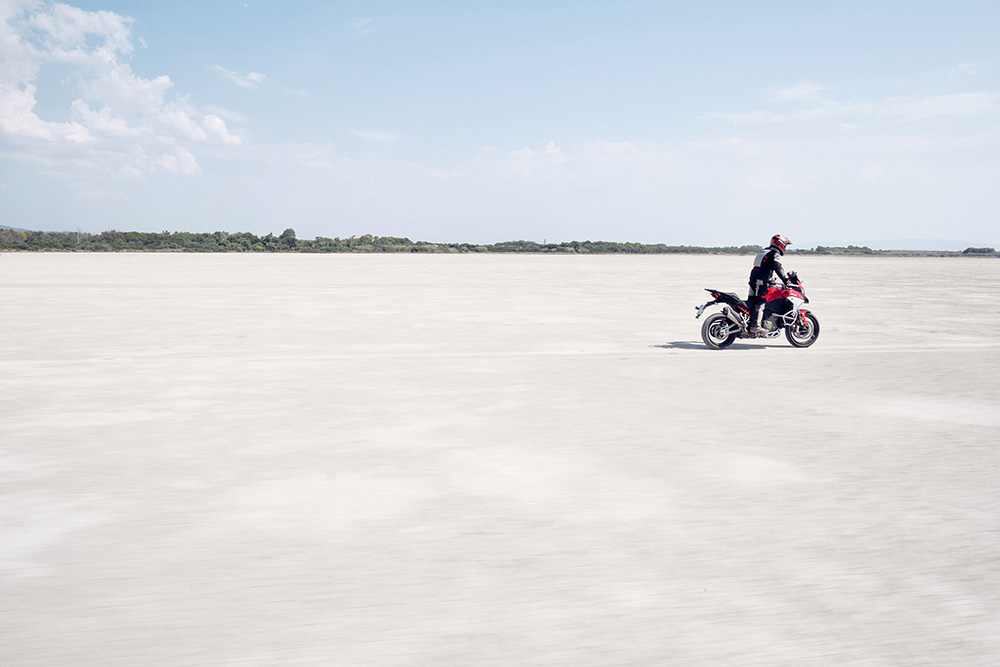 EMISSIONS AND CONSUMPTION (Only for countries where Euro 5 standard applies) 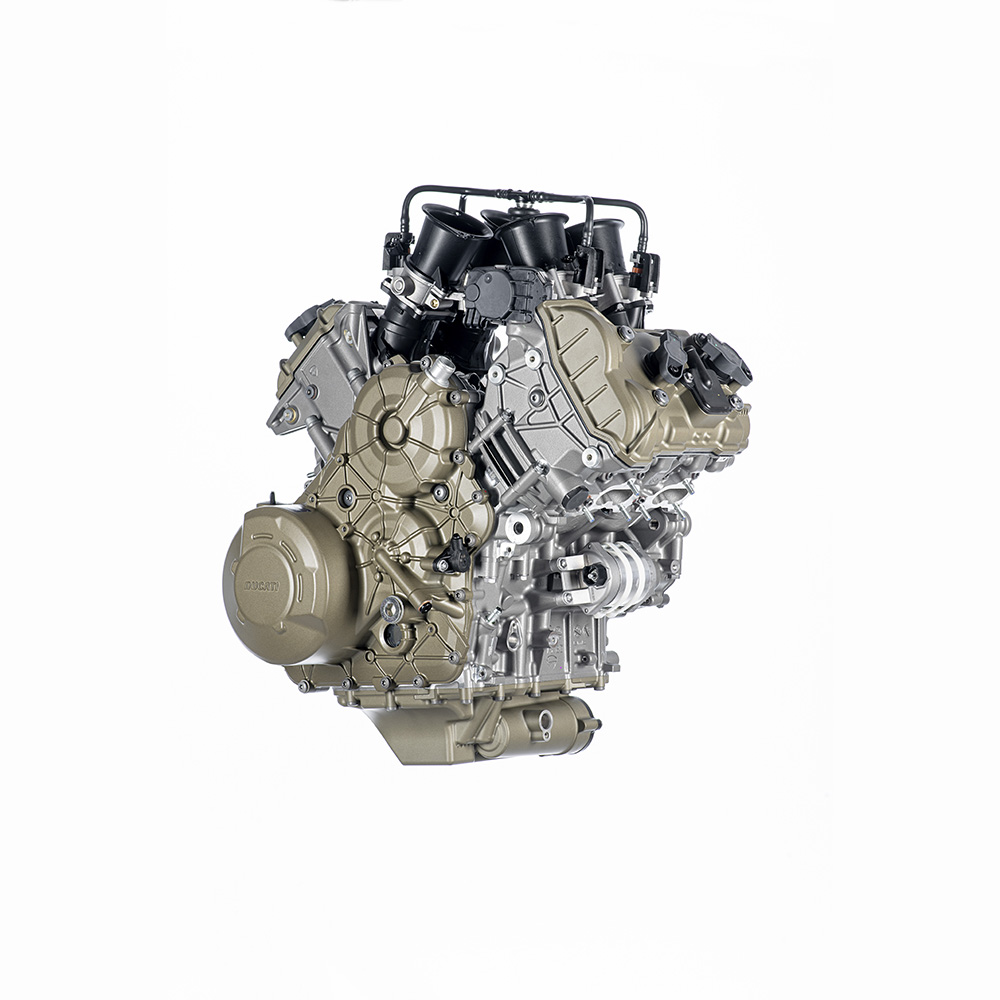 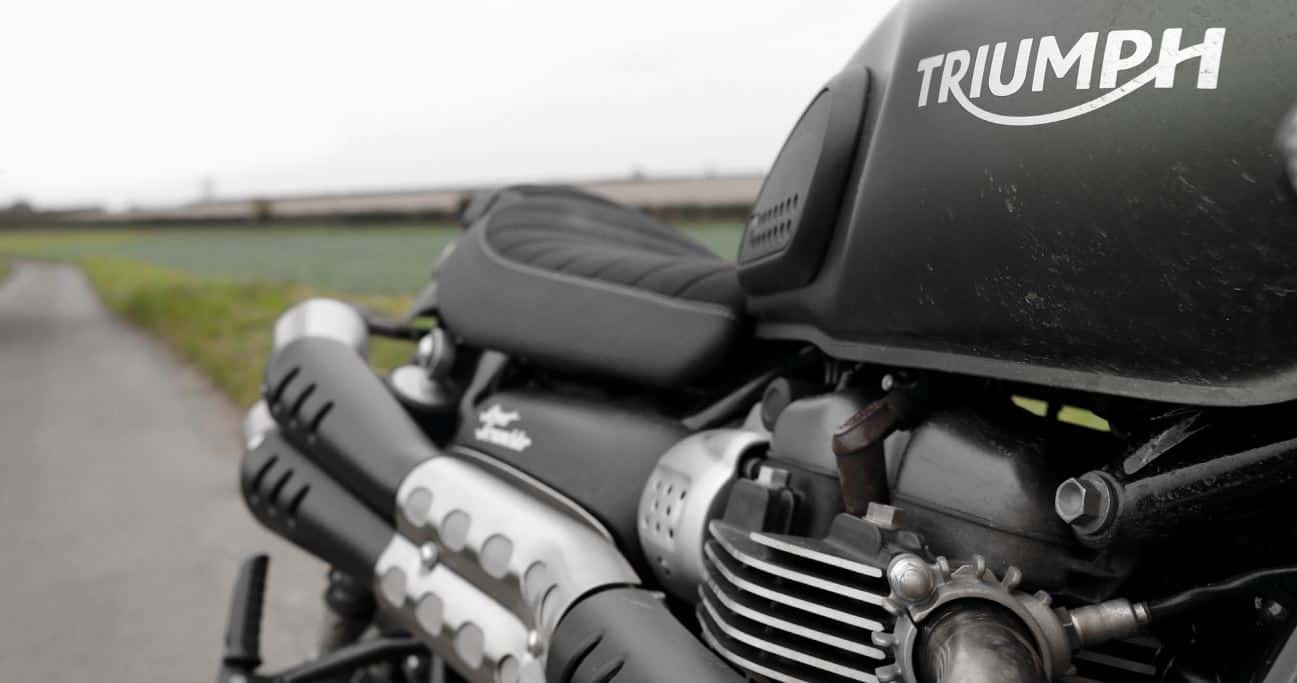