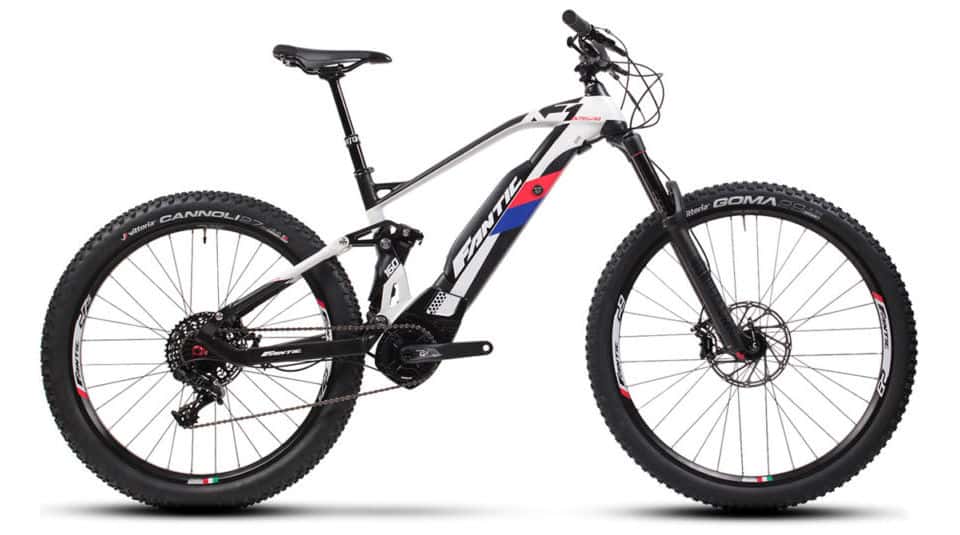 Have you noticed – electric mountain bikes are starting to appear at enduro events (WOR Events in the UK even run an e-mtb race ahead of their usual hare & hounds races). We’ve also cottoned on to them potentially making great cross-training devices. And now with our motorcycle manufacturers getting in on the act it was high time to check them out. So here’s a test on a Fantic like none we’ve ridden before…

Now we’ve tested a few Fantics in our time here at RUST (and formerly, TBM) – but none like this. Like a few other motorcycle manufacturers (KTM and Husqvarna included), Fantic have seen either opportunity or competition in the rise of the electrically-assisted bicycle and in the spirit of ‘if you can’t beat them join them’, they’ve started developing a full range of these e-bikes. Not just mountain bike types, but racers and commuters included. Fantic haven’t gone light on the job either, each of their offerings is highend in their respective markets, looking to tailor the characteristics of the electric motor to suit each application. So this Enduro model (we were attracted by the name, clearly) offers a whopping 90Nm or torque, to suit the gutsy hoofing you need to pull your way up hills, out of bogs etc.   And no question, this bike makes sense. It’s good use of an electric motor, adding assistance to your efforts on the pedals. You still work hard, it’s still cycling as we know it, but the reward for that effort, given the added power of the 250W motor is greater speed – right up to the point where you hit the 27km/h speed limiter. You could disable the speed limiter, no doubt, but then you have something that is more than an electric bicycle as far as the EU legislators are concerned. Not that any of us at RUST care for such things…

First, it’s time to ‘fess-up – I’ve not been a fan of electric motorbikes (although my experience has been very limited, just to KTM’s Freeride-E and the odd Quantya so far).
You see, I miss the noise and the sheer engagement you get with internal combustion engines just a little too much to want to engage in the electric motorcycle at this time. And frankly, like many I suspect, I feel there are a whole bunch of bigtime global polluters that need sorting before we start picking on small-fry offenders like motorcycles. So electric motorcycles – I’ve yet to be converted.

Yet put me on this e-mtb and I’m a true believer. This e-mtb is a stealth unit, the motor makes no noise (none of that annoying whirr) and it truly 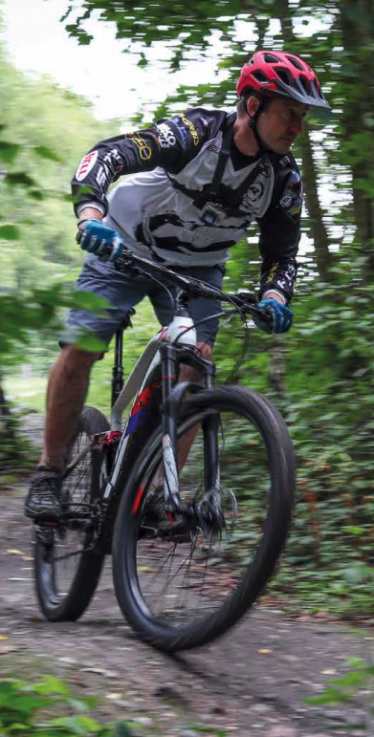 enhances the cycling experience, assisting rather than taking over. And how much it assists, that’s up to you on this Fantic, as there are three levels of boost available. Of course the more boost you employ the shorter the batterylife will be. But that said, with a 630wh rating, this battery has more life than most in the e-mtb world and even when pulling a lot from the motor that battery is still long running. According to Fantic, on minimum boost you’ll get around 90 miles range, on max we’re talking 35 miles (there’s a digital readout that tells you your remaining range). That boost level is instantly switchable too, so you can run along on minimum and then ramp it up as the hills or whatever get bigger, which seems like the sensible way to operate this tech.

Interestingly, Fantic are exciting the e-mtb world in the way they’re bringing their dirt bike knowledge to prevail in this emerging market. Cyclists, almost universally, have always run with identical wheels front and back (Raleigh Chopper aside). But Fantic have applied the old 21”/18” kind of ratio to this cycle by fitting a 29” front wheel and fatter 27.5” rear. Just as with dirt bikes, this works well in off-road, allowing the front to roll easier over undulations, while maximizing traction from the fatter rear tyre. But as well, with downhill being such a big thing in mtb-ing, that bigger front hoop creates a better front-back balance when descending – and combined with a dropper post (you press a lever on the left handlebar, push down with your butt and the seat drops into the frame tube) this makes downhill riding more secure with less sense of teetering over the front.

Fantic haven’t been afraid of up-scaling (up-cycling?) elsewhere, too. Those are 200mm discs front and rear, which combined with hydraulically-operated four-piston calipers make for strong stoppers. And 160mm – that’s over 6” – of suspension stroke front and rear makes for a plush, comfortable ride. Those are quality Rock Shox components there, too. It seems Fantic have combined the best of mtb tech with that of dirt bike tech, and that works just fine in this hybrid market.
The bike runs on an 11-speed transmission (derailleur in cycle-speak – a French term, meaning to de-rail) and it’s a wide ratio ‘box (or rather groupset) ranging from 11 to 42 teeth (the proverbial granny wheel) combined with the one 32 tooth crank sprocket (non-electric mountain bikes typically come with three sprockets on the crank – presumably the e-mtb doesn’t need these). Top speed is a limited 27km/h (if it wasn’t limited these e-mtbs would be reclassified, maybe as mopeds or some such), but take that limiter off (ahem) and no doubt this thing could go a lot faster. And the chassis could easily cope with that, freewheeling downhill it could get a lick on (just as well the brakes and suspension are so good).

The Fantic is some piece of kit. Most of us have developed a nose for expensive stuff, and you can smell it on the Fantic immediately. It’s beautifully designed and made and everything about it is both super-fancy and sweetly assembled. The battery is neatly integrated into the frame (hence it’s called the ‘integra’), the motor is neatly enclosed into the crank housing, the brakes, suspension – all of it is top spec and not just bolted on but fitted perfectly into place. And it doesn’t shout ‘electric’, you need to look twice, or more, before the enlarged crank housing really gives the game away.
So what does the electric ride feel like? Initially you may sense a little delay – it reminds me of turbo-lag on those 1980s turbo’d Japanese road bikes – between your own pedaling and when the assistance comes in. But that’s only from a standing start in the initial push-off if you like, after that the assist is steady and continuous, so you can almost fool yourself it’s all your own effort that’s making you so speedy. Not so. The bonus here is that the Fantic travels faster than your average mountain bike, and this means you can start using lines not unlike those you’ll take on your dirt bike. Not exactly the same, but closer. And so you do find yourself thinking further ahead along the trail than you would on a standard bicycle.

Being a bit weightier than your average bicycle seems to give it more grip on the terrain too, like a motorcycle has (to a degree). This 160 model sits between a 140 and a 180 model, and it would seem the 140 is of the fastcornering woods riding cross-country guy, the 160 is for Malcolm while the 180 is more daredevil-downhill oriented. So three variations on a common platform. So as you can imagine from that, we’ve got fairly neutral handling here. Like a regular mountainbike they kind of feel better when you’re stood (or crouched) over them, than siting in the saddle – riding seated seems to leave the front a little too light for accurate cornering. But that’s pretty obvious isn’t it, after all on our dirt bikes we’re taught to scootch right up behind the bars when cornering, so it stands to reason you should weight forward on an e-mtb too.
The e-factor certainly helps in giving you many options. If you’re getting tired or getting dropped – go to maximum boost (and it really does multiply your efforts). Going for an extended tour – hit the lowest setting. As our man at Fantic UK explained, it also means riders of mixed ability can ride comfortably together. There’s been a trend for older mountain bikers to pick the e- option to extend their riding life.

THE FUTURE? I’ve been mountain biking on and off over the years. My own bike is a crusty 14-year-old cheapo Specialised Hardrock with zero suspension and fading vee-brakes but an alloy frame at least. It does for me – just. But a few years ago a buddy (hey Gary!) offered me a ride on his full-suspension disc braked Specialized Enduro for a run on a downhill track at the Cannock Chase Centre (in the UK) – and what a ride, the nearest thing to dirt biking I’d experienced without actually riding a dirt bike. Afterwards I said, ‘when we’re banned from riding our dirt bikes, we’ve got this!’ With e-mtbs we not only have that but we have an easier ride back up to the top of the trails, too. And more speed on the level. Hey, that’s not such a bad future. One we might one day have to face up to.

In the meantime, is this the ultimate cross-trainer? For the moneyed – hey this thing busts a clean £5000 hole in your bank balance (and then some – as do all the quality e-mtbs) – yes, I think it is. Problem for me, (a lesser-paid journo) and other lower-earners – or the ‘over-burdened’ – is that five-large is our budget for our number one set of wheels. Can we afford to spunk that again on a training aid? No, probably not. Unfortunately, for now, I’ll keep hammering the Hardrock.
In the meantime – fair play to Fantic, this is actually one trick bit of kit. And this isn’t even the top of the e-mtb tree for them, if you want an über-e-mtb check out their Integra Enduro R in carbon. Then you’re talking…