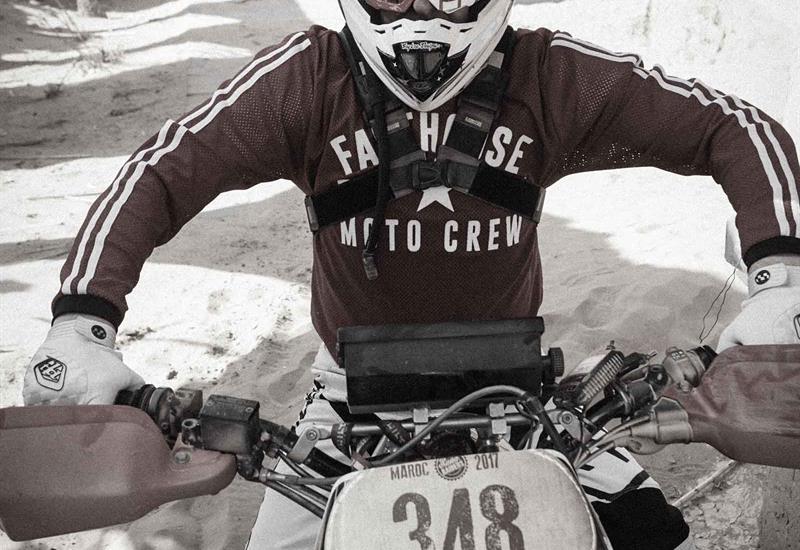 Welcome to Sand Raiders, a rally that pays wonderful homage to the Dakar Rally’s fantastic past…

THIS is a sporty trip, one of endurance, tackling tricky tracks, where everyone helps, waits for his group, where we can taste the local culinary specialities and where we completely enjoy the true feeling of freedom which has become so scarce in our western world. And this trip, Sand Raiders, is open to everyone with a love for vintage motorcycles (scrambler or trail) and epic riding.

At the start of every stage a road-book, a GPS, a beacon and survival food kits are issued to all riders. With the starting point digitally connected to the finish, the participants, who typically bunch into groups of five or six – usually on the basis of affinities andor mother tongue – set off. Each running to their own rhythm. The groups sometimes languish, while new ones can form on the trail, according to the levels of each, or due to mechanical troubles, errors of navigation and so on. 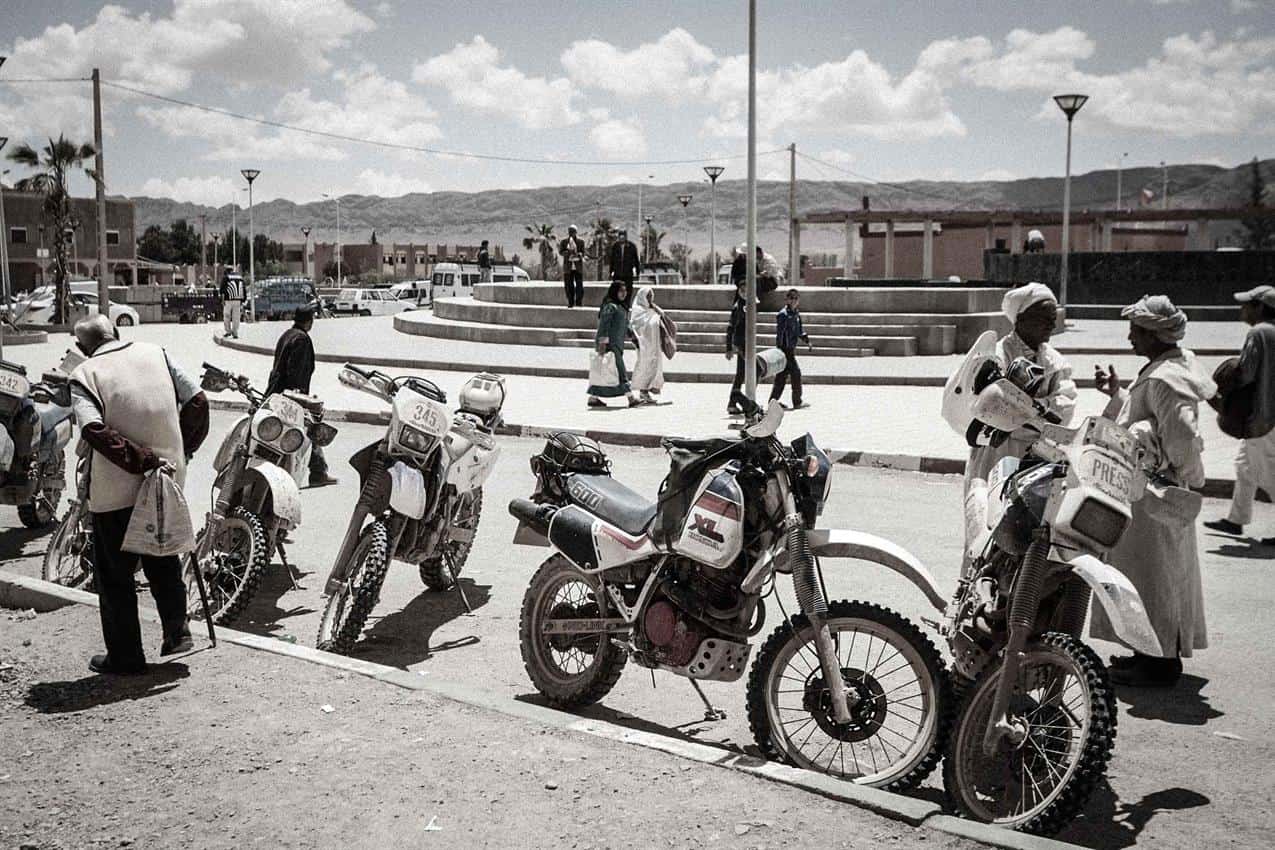 And while it’s a real adventure, there are sweep vehicles and other assistance there to guarantee that it won’t end too badly! The logistics are impressive, and the number of support vehicles involved makes it look like a real competition: one heavy duty truck for the transport of luggage, food, water, beers and stricken motorcycles; one 4×4 truck from Dakar; one pick-up for mechanical assistance; one 4×4 Toyota Land Cruiser for press; one 4×4 Land Cruiser for the medical crew; one 4×4 Land Cruiser for the boss, as well as two motorcycles for the press, (one of which I’ve used for three years now – a regular Suzuki DR600, great bike only missing an electric starter, alas!).

The medical team is led by an orthopaedic surgeon and traumatologist, and his wife who is a psychologist and neuropsychologist, expert in trauma injuries. They are assisted by another Spanish doctor. Very reactive, they travel in their 4×4, helped by satellite, GPS and radio.

Safety is a really crucial aspect. Every participant gets a beacon. It’s connected by satellite to the organising team, allowing the boss to know exactly where is every rider is, through the live feed to his tablet, such is modern technology we have this even in the middle of the desert! The whole raid is also checked in real time by a remote observer based in Spain. This instrument also allows the riders to be in contact at any time with the mechanics, the doctors, but also to warn the organisation in case of late, but safe, arrival. The rescue helicopter of the Moroccan army is the last option available in an emergency.

On the mechanical side, Pep surrounds himself with true McGyvers. Two guys capable of repairing a clutch in the desert, capable of welding a crankcase – bare-chested – wearing just sunglasses for protection. A permanent smile on their lips, a great conviviality – and a fresh beer never too far from reach. One is riding a motorcycle for rapid deployment, the other in a pick-up with the heavy equipment. They are reactive and very effective. They operate all day long dealing with the breakdowns then help the participants with the daily mechanical repairs at the end of each stage, sometimes till late at night. The machines of course being of a certain age, and mileage, and are being subject to really tough use, so you can imagine the rate of attrition. But those mechanics, yeah, ‘tireless’ barely does them justice.

Everything is designed to ensure the riders enjoy their journey to the max. Indeed, the Soloraids team even pick up the riders’ equipment and motorcycles in Europe a few weeks before the departure, and bring everything back, taking care of the boring customs formalities and of numerous kilometres separating us from Morocco’s tracks. The participants just need to jump on a plane with a little cabin luggage, to arrive fresh for the first stage.

Pep is surrounded by extraordinary efficient staff, hand-picked every one. Often voluntary and present since the first steps of the raid, they give everything to make the machine well oiled without affecting the adventurous nature. There is no strict rule, everyone there is responsible for himself and the common sense remains the best team member. They work night and day, sleep little, smile a lot and support the riders without demur. Without them and their hard work, before, during and after the event, nothing would be workable. 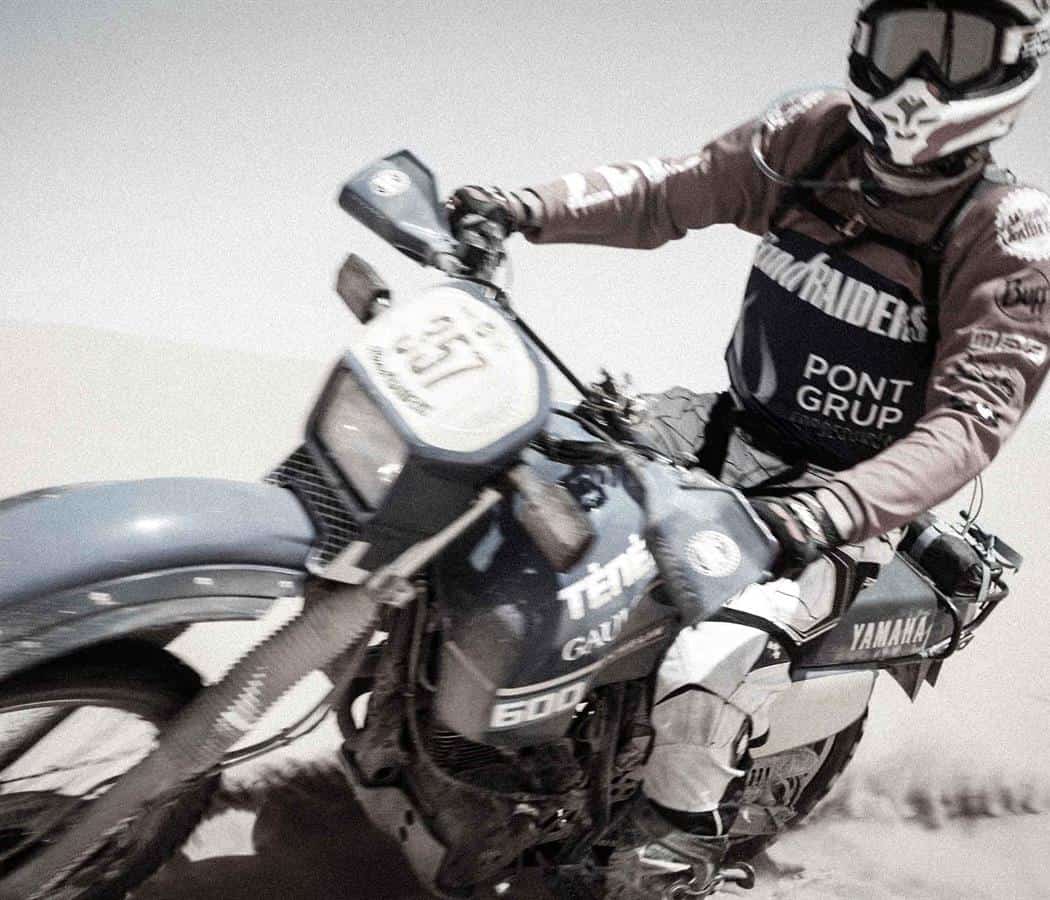 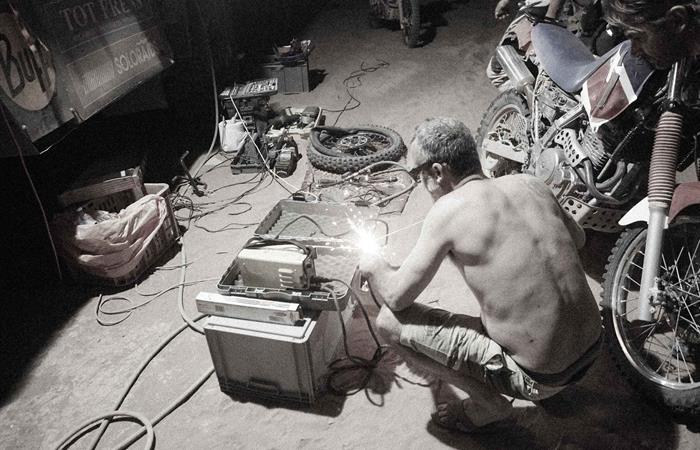 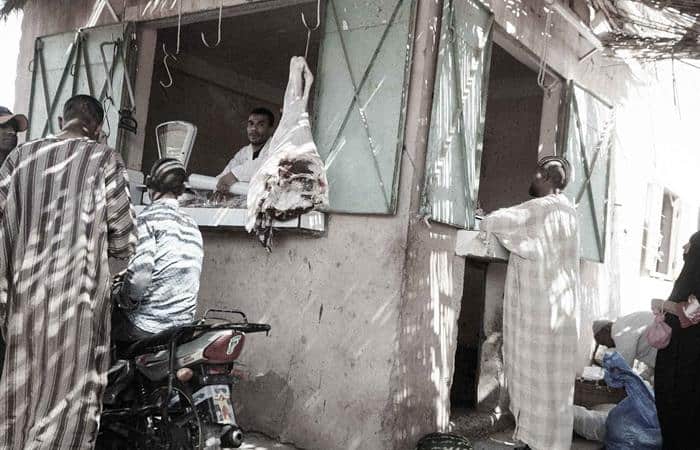 The trip is constantly evolving and every year Pep, during his solitary reconnoitres, discovers new tracks, new routes, new horizons. Needless to say, Morocco abounds in luxurious and varied terrain. This year the rally started in Fes, the famous imperial city, heading into the Atlas mountains following what was a fresh and rainy stage. Tracks alternated between fast trails and muddy traps and the forests of cedars on the Atlas Mountains were simply magnificent. Very quickly, the stress of Western life dissipated to give space to an intense concentration which riding on these tracks requires at all times.

Then the rally changed character again as heading south, after crossing the Atlas, it crossedd the plateau of Rekkam and wheels touched sand for the first time. Here, everything is very very dry, even Martian sometimes. It’s goodbye to rain and fresh winds, a hot sun blazes unrelentingly despite the spring season. Around Merzouga, at the doorstep to the desert, we met Sebastien Loeb training with the Peugeot sport team, a helicopter ‘opening the road’ in front of him. We were impressed by the abundance of their equipment, Loeb’s impressive driving, but also their friendliness, a very nice team which was delighted to share some anecdotes with us. In the end we are all led by the same passion even if the purpose is not really the same.

The road-book took the rally, during the third stage, into a large canyon where the track wound up on slippery stony trails. Suddenly the riding became a little more acrobatic. Personally, my thin trials experience served me enormously. We crossed small, lost villages made with brown dirt (adobe) where people’s lives depend on rudimentary farming. It was as if we’ve stepped back in time, centuries. The children, sometimes very small, played in the shade of date palms. They were delighted to greet us. Even there, caution and respect are the main thought. Throttle down.

The following stage passed through the mythical ‘forbidden track’ used by those famous raids during the 80s. Rocks sometimes make way for small dunes and fesh-fesh zones (very soft and deep sand). The experienced riders floated, full gas, over the worst while others found themselves buried, axle-deep. It was in these moments that the words ‘solidarity’ and ‘commitment’ took on their true meaning! 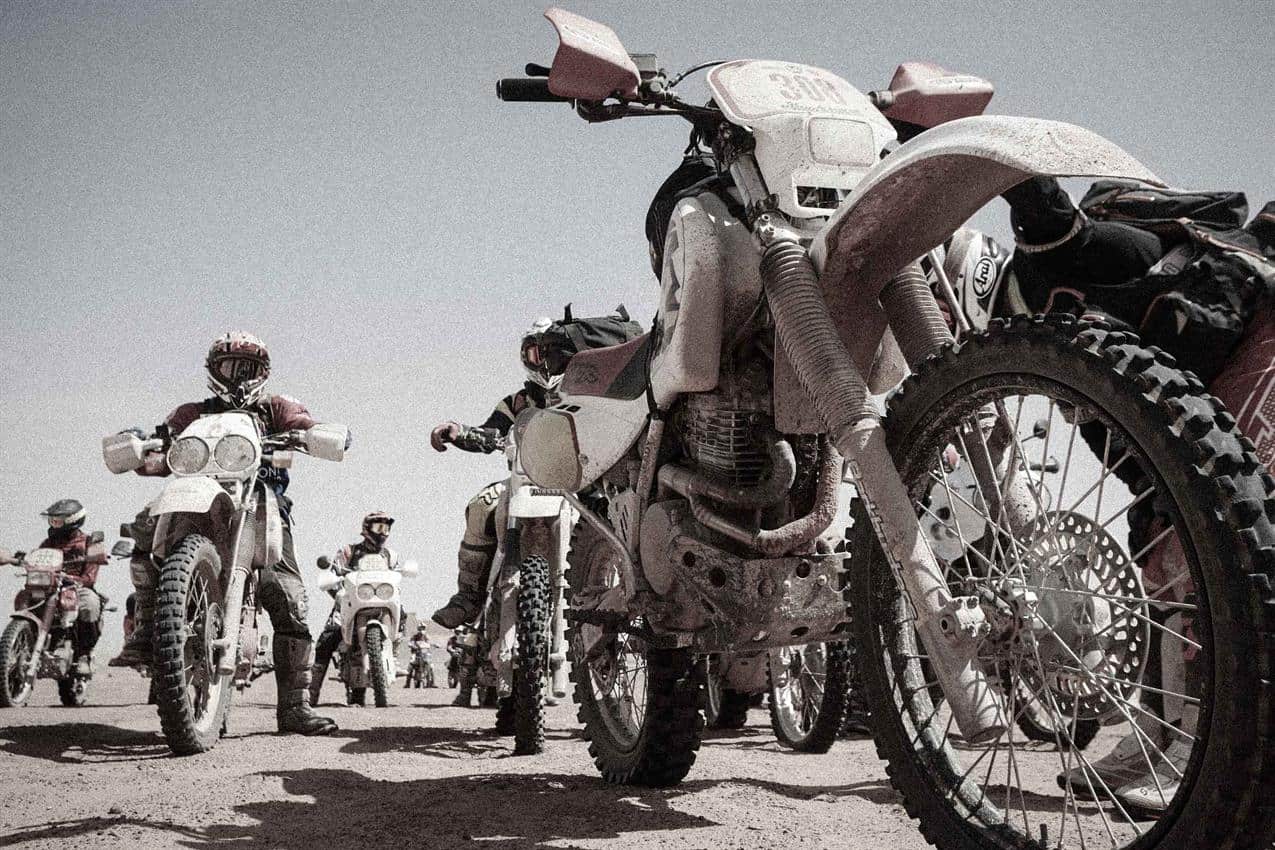 Even the last 25km left no respite. Motorcycles ran into a chaotic sea of sand before, finally, heading to the finish. The finish of this long stage was, then, majestic. After so many kilometres travelled on an immense and arid plateau, the enormity of the never-ending dunes of the true Sahara faced us. A battlefield of contrasts between pink and oranges. The riders admired them, enjoying a well deserved rest in the camp at the Erg Chebbi, an adventurers’ den.

The stages in these dunes are a unique experience for whoever rides there for the very first time. The heavy bikes from the 80s typically suffer. Engines warm and consume oil. Motorcycles bury themselves, the riders fall and quickly lose energy – in particular those who do not have an electric starter! The riding, very technical, is truly testing on a terrain which turns out to be much more hazardous that we first imagine.

The wind shapes the dunes, one side easy the other side steep, which can cause vertiginous falls if the rash rider doesn’t stop at the very top to check his way. To climb these mountains requires real strategy and a very good ground reading. The task is sometimes more complicated by the sun coming from behind, killing correct apprehension of the relief, or with a too dusty mask… And, the orientation can be quite tricky due to the curves we make to climb the dunes. And the heat is… tenacious?! In brief, in these roller coasters, the human body and the mechanics of the machines are pushed to their limit. But the pleasure of surfing on untouched sand is huge. It’s quite similar of the sensations felt by a freeriding skier in snow powder. 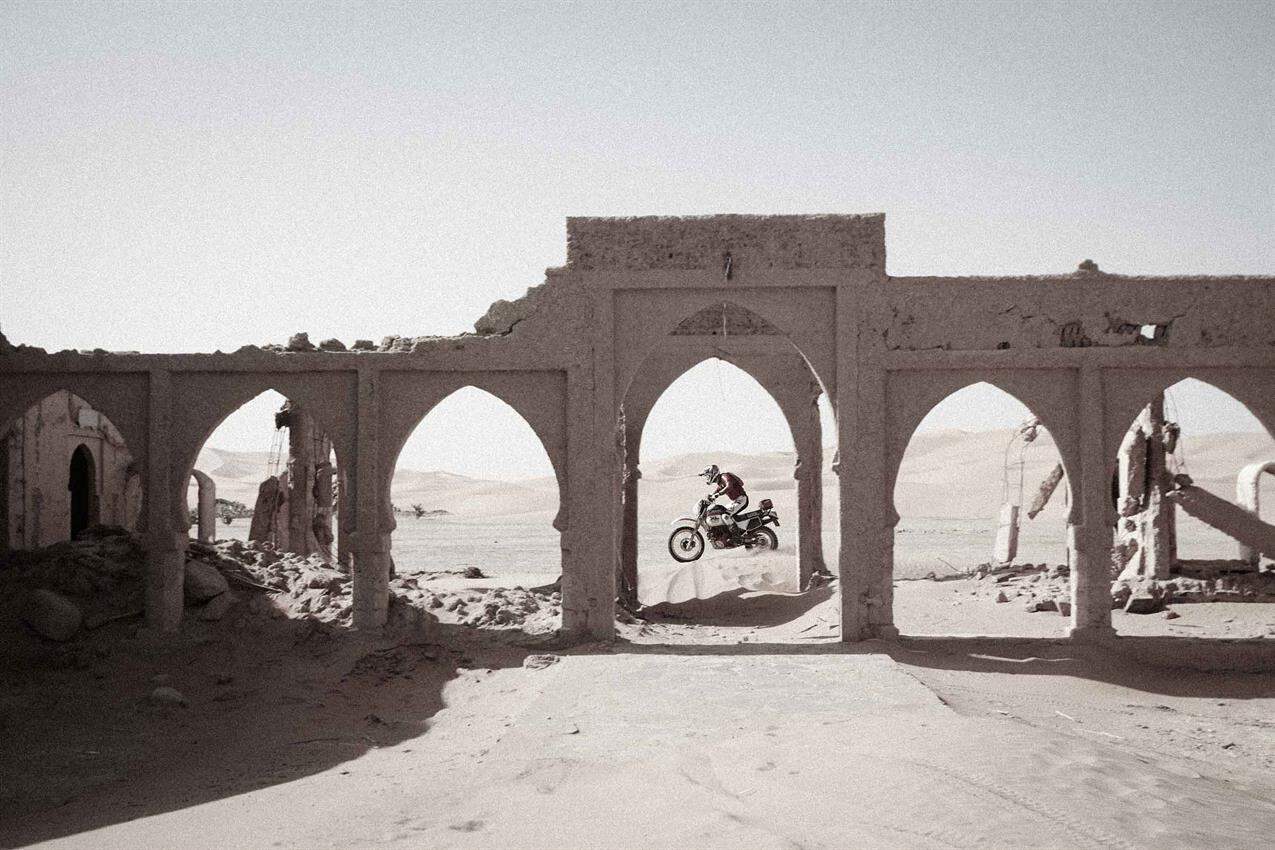 The Sahara offers its best moments at sunrise and sunset. In the morning the sand is firmer, the atmosphere is fresher, helping the rider. The light, coloured with a thousand tints of red and orange, is beautiful, almost biblical. Every year, the participants wait for these magic moments. After sunset is just as fantastic –

running away from the smothering heat of a bedroom, I spent an extraordinary night under the stars gazing upon the Milky Way and the entire night sky. Freed of light pollution, only in the desert can we appreciate such a breath-taking show.

The next day, the last off-road stage of the trip allowed us to play in a few last small dunes, to cross cheerfully (now) some fesh-fesh before heading to Ouarzazate via the famous Lake Iriki (completely, and always, dried up).

And finally having said our farewells to tracks and to desert, we took the road to Marrakech. A sinuous road of asphalt, passing by the famous village of AïtBenAdou which is sight for sore eyes, especially those of the resting riders and their machines. This stage of transition is appreciated by everybody. It allows us to still to dream a little before returning to ‘normality’.

In Sand Raiders we can relive a fantastic past, we can experience some of what our fathers or older brothers might have experienced. We can appreciate and adore their machines. But now, as then, the magnificence of the landscapes, the welcome and the gastronomy of the locals, make Morocco a very exotic and dreamy destination, just a few wings beats from Europe. We must return. 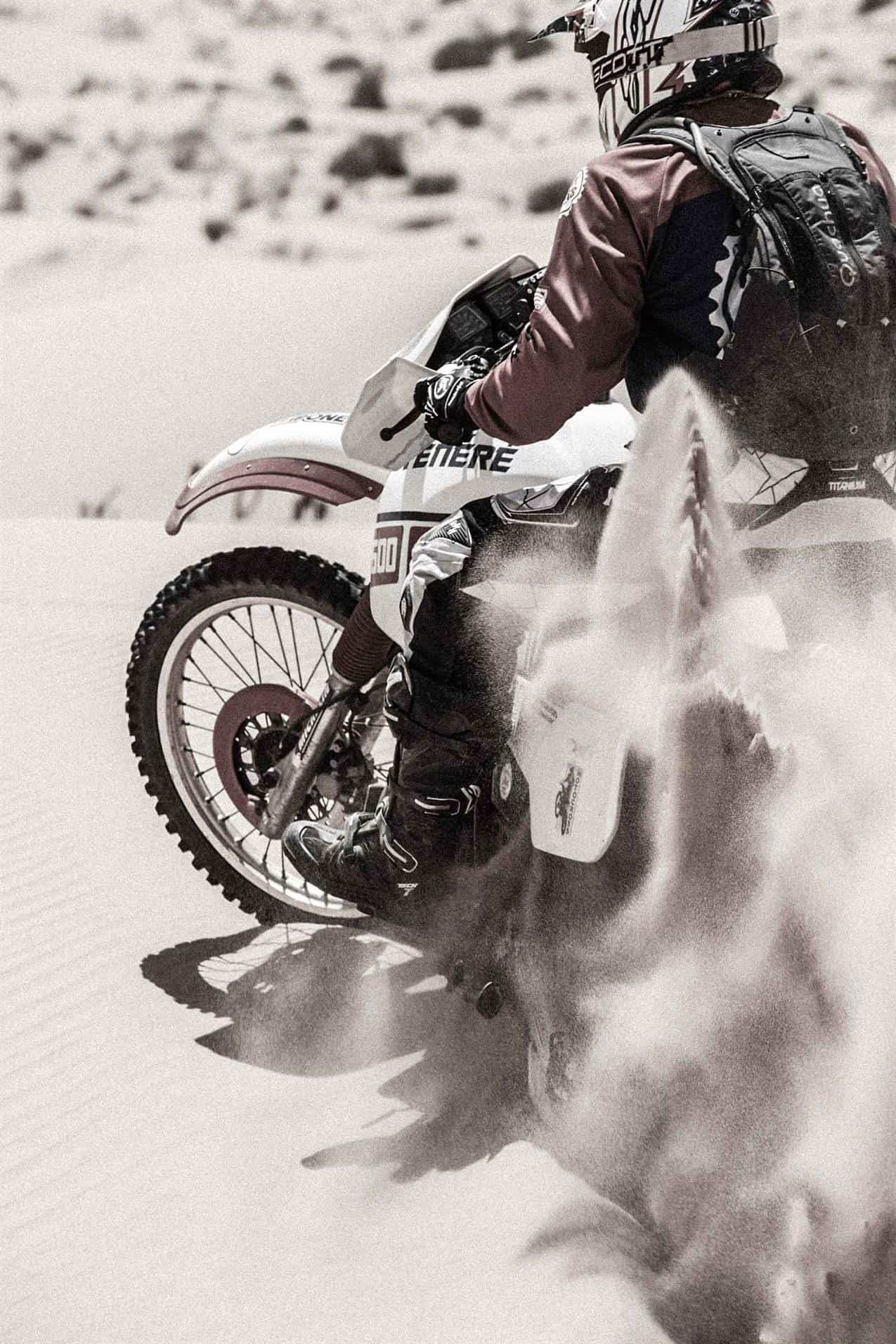