Beta are winning – world championships and in the showrooms. And they’re keen to tell you this is not on the basis of their bikes being ‘ready to race’, but on their ride-ability, ‘friendly feeling’ as they put it. And now they’ve added an even friendlier machine to their range, the RR200. Come on, it’s time to cosy-up…
Words: Jon Bentman Images: Beta

THE NEW BIKE BETA RR200 HOW TO BUILD A 200
Okay, take an RR125, then bore and stroke the motor to 190cc’s – and there you have it, an RR200. Only there’s more to it than that, for instance the RR200 comes with an electric starter (no kick start). It needs customized exhaust valve tuning, its own expansion chamber design and running a lower compression ratio it runs a cooler spark plug too. Lots of little tweaks, for sure. But we’d imagine when Beta introduced the RR125 last year, it was designed in conjunction with – or with the knowledge of –the RR200 to follow. Dimensionally, then, the RR200, is the same size as the RR125, same wheelbase, seat height etc. But it is 3kg heavier (97.5kg) – no doubt due to the electric start and extra meat on the piston/cylinder. Where it radically differs is in the engine performance. Peak power is only marginally more than the RR125, but it comes 2000rpm earlier (around 9500rpm). The big news is instead in the huge hike in torque, which virtually doubles that of the RR125 and stays healthily ahead of the 125 right up to around 10,500rpm mark when the RR200 hits the proverbial brick wall when it comes to rev capability – yeah, you ride the RR200 on torque, not revs. 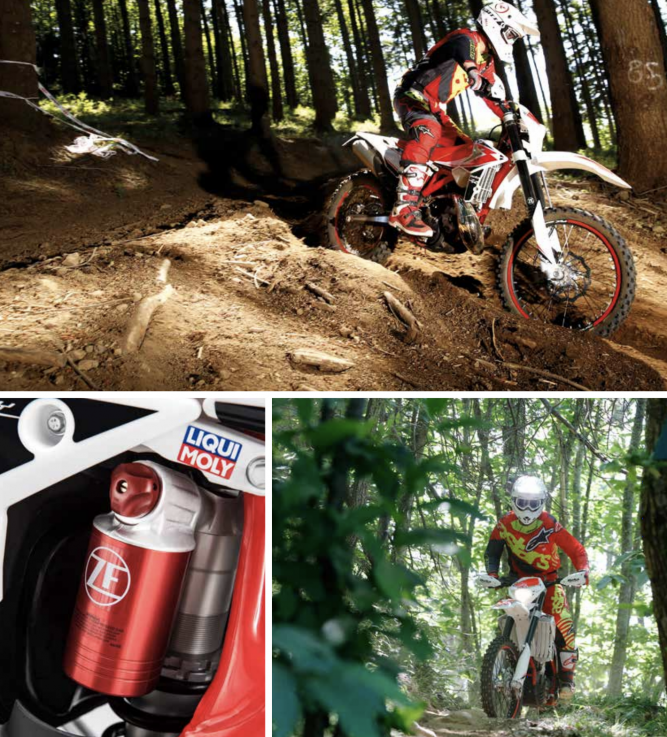 BETA RR200 WHAT’S IT LIKE?
Just lovely. Like a mini-me to Beta’s RR300; you can ride it real low in the rev range and it pulls, not as strongly as the 300 obviously, but quick enough not to want to change down a gear or two. You can be a lazy rider if you want, it doesn’t punish you. And if we had to make another comparison, its kind of like a two-stroke version of Beta’s RR390 four-stroke – it’s a trail bike that will race if you like, but the feeling is of a play bike, not race bike. Just chill out and enjoy the ride. Of course you can score great results riding like that, and I’m sure the RR200 will pick up wins here and there. Interestingly it does feel smallish. The 125/200 chassis is only 5mm shorter than that of the RR250/300, so that doesn’t sound much, but it’s also 13mm shorter than the four-strokes and the seat height is 10mm less. Somehow – and this could psychosomatic – it feels distinctly smaller (forcing 100kg of rider weight through the suspension possibly adds to this feeling, too). For smaller people this is great news, but people taller than 6’0” will want to try before they buy. Now I’ll comment again later on suspension, and the new Sachs ZF kit is good, the no-tools adjusters are a win for ease of use, but they’re also a win for making a significant change to the performance of the suspension – y’know, clickers that work. But with light bikes like this, you have to be more precise with the adjusters to get the ride dialed in – less weight seems to mean more sensitivity. So while I found a decent setting for the four-strokes quite readily, it would take me another ride or three to get the 200 dialed-in. All told, where I can’t ride a 125 to save my life, on this 200 I felt perfectly at home, it’s less stress and more fun. It is a great addition to the Beta range and for woods riders, say in the UK, in NZ and East Coast US I can see a healthy market for this bike. NICE.

THE REVISIONS SUSPENSION
I can’t help my feelings of prejudice; I’m just not immediately ready to liken Sachs suspension to WP or Kayaba for quality. I’m sure it is just prejudice, but until I get a chance to test a Beta and say a KTM back to back (which I must do) I’m still half wondering if the Sachs, even with ZF stickers, are up to the top level. 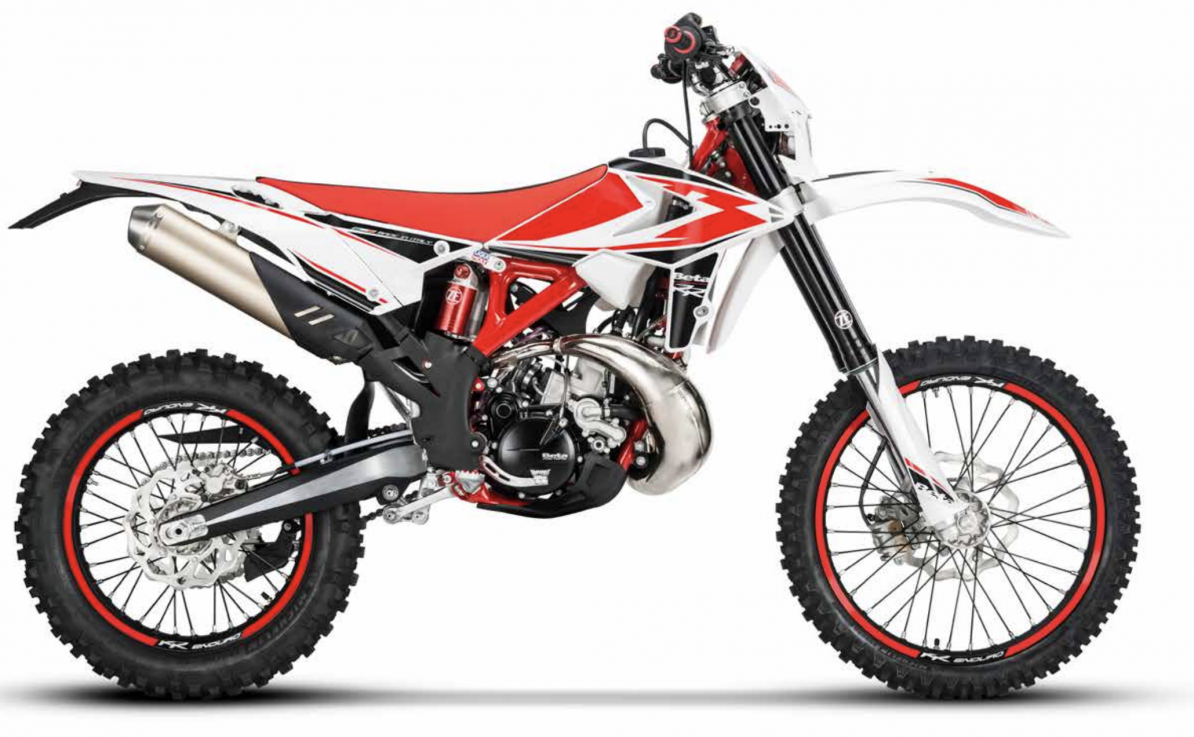 So is the 2019 kit better? Not easy to say, but probably yes. At the launch venue, Hell’s Gate, it was super-rocky and pretty much any suspension is going to take some work to settle on this stuff. On the stock settings, I was getting jarred and shocks through the bars all the way.

Fortunately, using the RR390 as my test mule – and working on backing off both the compression and rebound damping on the forks, and the high-speed compression adjustment on the shock – within three rides and three sets of adjustments (about half an hour’s work) I was able to find a very acceptable setting. The jarring and shock disappeared and a feeling of plushness came over the ride. So I was extremely pleased to find the adjusters worked so well – and this plushness came within three clicks of the standard settings, so there’s some range to the adjustment available. Good stuff. As well, like on the latest Husqvarna TE/FEs, there’s now a preload adjuster on the forks (again a tool-less item) and this worked equally well, with max preload holding the forks high – probably ideal for sand riding. In all the feeling is the new suspension is good, it worked well once it was dialed in for the extreme setting. How well it’ll work where you ride, and over a protracted race environment – that we’ll have to wait and see.

FOUR-STROKE REMAP AND THROTTLE UPGRADE
Yes, I liked the revision here. The throttle action on all the four-strokes felt smooth and nicely graduated. There was no jerkiness when going from no throttle to some, the RRs picked up nicely, smoothly. An extra 10% fuel economy is always welcome too, that might be the difference between making the next refuel and a long push.

NEW CLUTCH MASTER CYLINDER
This is said to offer a lighter clutch action. Without a direct comparison it would be hard to say anything categorical on this. But by the same token the clutch action across all the bikes was just fine, good enough not to leave a conscious impression. So yes, good!

EXHAUST VALVE ON THE RR300
Hey, I really enjoyed riding the RR300. I rode the RR250 first and was struggling a little with the suspension on the rocks and with the power causing some spinup. But when I got on the RR300 I didn’t feel the rocks so much, as the rich longslow rev of the 300 (‘bwooooaaarrr’) gave it a similar feeling of connection to the terrain as the four-strokes offered. As ever, it was my favourite two-stroke, only this time taking the win by the narrowest of margin from the RR200. Yeah, the new power on the RR300 was perfect for Hell’s Gate (no surprise).

THE BIKE WE ALWAYS FORGET
But not this time

BETA XTRAINER
Hey, what a cool bike! I got confused thinking the XTrainer I rode had a detuned 300 motor, but it was instead a detuned 250 (apparently the XTrainer comes in 250 and 300cc variants). And yet it still felt so nicely torquey, like a gentle 300 – and that’s nice. The chassis, the whole feel is that of a bike that’s 80% what an RR300 is. You can feel the familial resemblance, but the ride is smaller, softer and very nicely controllable. There’s almost a trials bike feel to it, but given modern trials bikes are akin to a pogo-stick with less accommodations, then maybe that’s not the correct comparison. Point being, at Hell’s Gate this was quite a cool bike to have. And it was also a fair bit of fun to ride in the grass test, curiously. Maybe because it rides lower to the ground, like an old scrambles bike, it feels easier to push around and lay over in the corners. Mentally it started to occupy a similar headspace to the RR200 – and definitely there are character traits that the two share. But equally they’re facing in opposite directions. The RR200 will make the better competition bike, the XTrainer will make the better trail bike. There are so many people this bike will suit. The older rider. The Long Distance Trials rider. The extreme rider. The smaller rider. The newbie. It’s a great bike and having now ridden it I’m not at all surprised to find it’s Beta UK’s top selling model.

THE ROUND-UP
I love the addition of the RR200. If I were say 12kg lighter (if only) this would probably be my choice of ride. If you think a 200cc two-stroke would be your choice of bike, then this probably is your bike. I’ve ridden Warren M.’s 2016 KTM 200EXC and this new RR200 easily matches up to that, it’s possibly even nicer – I just love the torque. The suspension improvements for this year are probably another big positive. Being able to make damping adjustments with your gloved fingers means you can make changes on the trail, no need to come back to the van or break out the screwdriver from the bum bag (fanny pack). And the fact the adjusters make such a noticeable change within just a few clicks – that’s good news too. The four-strokes are cool weapons. I enjoyed the RR350 this time, so smooth and linear – and a rev-hound in the right terrain. But here, at Hell’s Gate, I loved the RR390 the most. It’s like a big 250F, so easy to ride, and the extra oomph isn’t an embarrassment, it’s all for the better. A great clubman bike. And we all know the rest of the story. The RR125 suits the Youth Cup hopeful. The RR250 suits the budget-conscious racer. The RR300 suits the extreme rider, but racers will love it too (ask Steve Holcombe). The RR350 is the racy oversize 250F. The RR390 is the clubman all-day-long bike. The RR430 is the racy 450F for the rider who finds a full-bore 450 just too much. And the RR480 is the big easy – show it a desert and sit back and enjoy. Yep, as ever, great work from Beta. Each year a consolidation, each year a neat bit of growth. Very nice indeed.