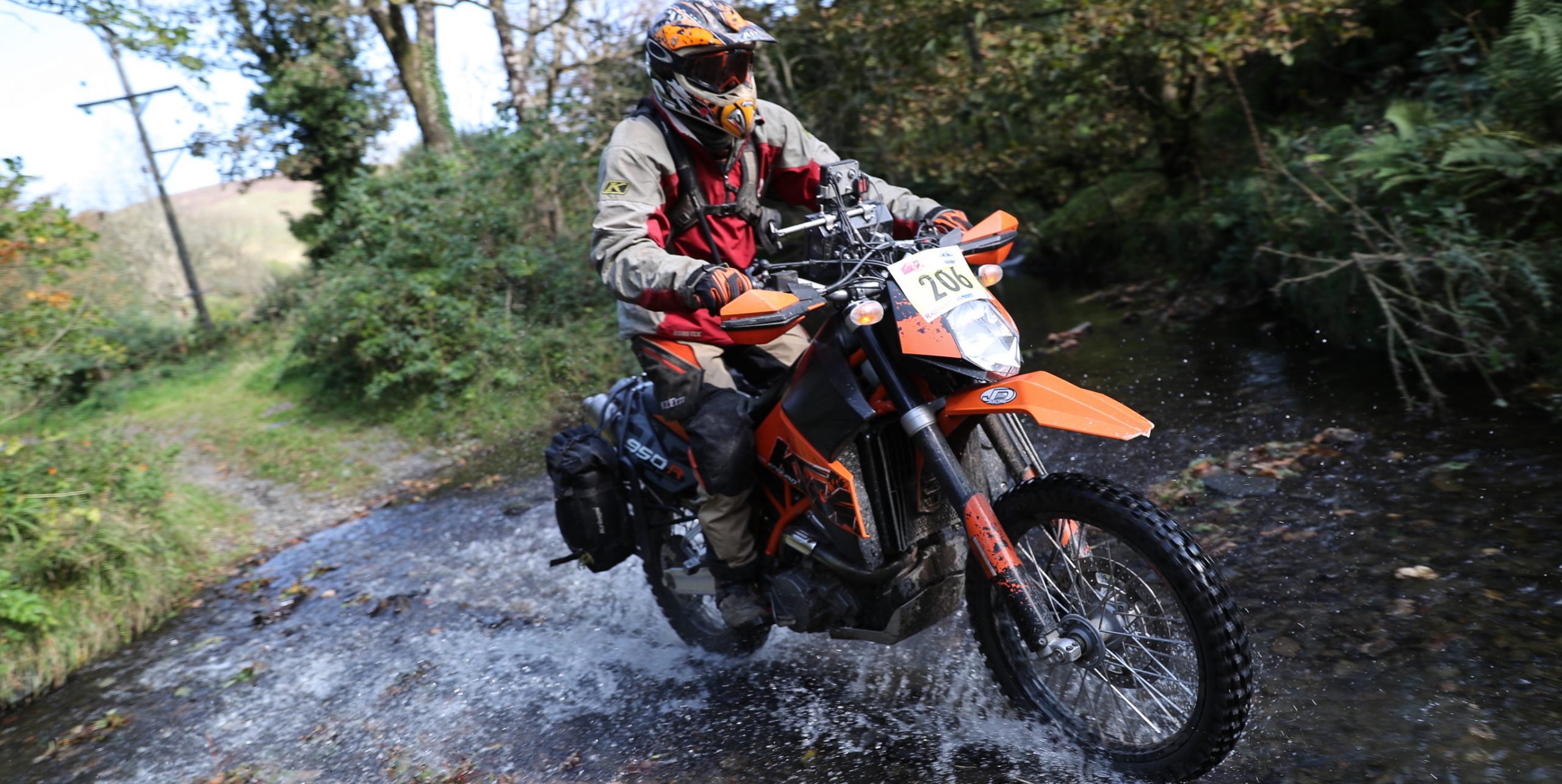 Back in September 2019 RUST rode the final round of the Adventure Spec Challenge, the IoM 500 by Rally Moto. The big finale to this three-event roadbook rally series, it offered probably the most technical riding, but also the most dramatic scenery. Something special for sure.
PrevPrevious
NextNext
PrevPrevious
NextNext

The Isle of Man 500 by Rally Moto was always going to be something special. The Manx isle has a vibe all of its own, even outside of the TT or Manx GP weeks. It’s stunningly beautiful, too. And of course as it took a boat ride to get there, that was special in itself.

RUST’s pair of JBs – Jon Bentman and July Behl – went full orange for this event, JB on his KTM 1290 Super Adventure R long termer and July managed to grab a 790 Adventure R off KTM UK. Given it was the Isle of Man, two days wasn’t going to be enough, so the pair stretched it to a five-day long weekend. Travel on Thursday, Friday a play day riding the TT circuit and investigating the island, then two days on the roadbook competition and Monday the return home. Luggage was pleasingly modest; for each bike an Ortlieb roll bag, a tent and a tank bag.

This being a ‘500’, camping was the go – you get all the onsite camaraderie that way. Equally, no vanning the bikes there, no trailering either, the whole idea being this is for road bikes not pseudo competition bikes.

The campsite was set in a lovely paddock just behind the village of Ballaugh (famous for the bridge which the TT racers jump). The pub was a 100 metre walk, then there was the wee stream that the bridge spans and a backdrop of mountains, while the onsite amenities were all generous and clean. Perfect.

Being September, this was summer at its most mature, before the onset of autumn. It got cool in the evenings, but not icy, certainly not the -2ºC we’d endured at the Kielder 500 at the beginning of the year.

Robert Hughes and his Rally Moto team were at full stretch on the Friday as recent bad weather and road closures had played havoc with his road book. So while we teamed up with mate Steve Ross (who we’d met at the Kielder 500) and had fun checking out the island’s sights Robert and the boys were scouting diversions and trying to get these into some format that we could insert into the pre-printed roadbooks. A big task for sure.

Saturday morning came and sure enough the riders’ briefing was a detailed one as Robert read aloud the changes while we all made the amends with our assortment of biros and felt pens. The event is run in conjunction with a rally event (enduro bikes) so we had a delayed start.

Robert had done a great job on the roadbook, creating a long-long lap that took in the length and breadth of the island. The 500s are not all about off-roading and the first part of the ride was a chase around the small lanes of the northernmost part of the island. Good to get back into the practice of road book reading and good to remind us that this isn’t some kind of rally raid, it’s meant to have that kind of 50:50 road/track mix which makes adventure bikes the pick over lighter enduro/trail types.

When we got onto the trails proper they were stunning, running up and over the mountains that run along the spine of the island. It looked like slate type rock base on these, and they were two-track where farmers’ carts then 4x4s had evidently spent centuries going back and forth. The riding was more technical then on the Kielder 500, but not hugely so. Where it was tricky – such as a couple of descents down from the mountain – it was just a matter of taking a moment to plan your path (and not panic!).

We lost July at about the halfway point. He’d taken a dive in a mud bog (the only mud bog – and not that bad a bog to be fair) and he’d pulled a muscle in his shoulder, he said, although equally he was probably remembering the expansive lunch menu back the pub. So JB tagged onto a pair of KTM singles for a while only, this impromptu trio then got a little lost having made a wrong choice at a five-way junction – pays to take your time. 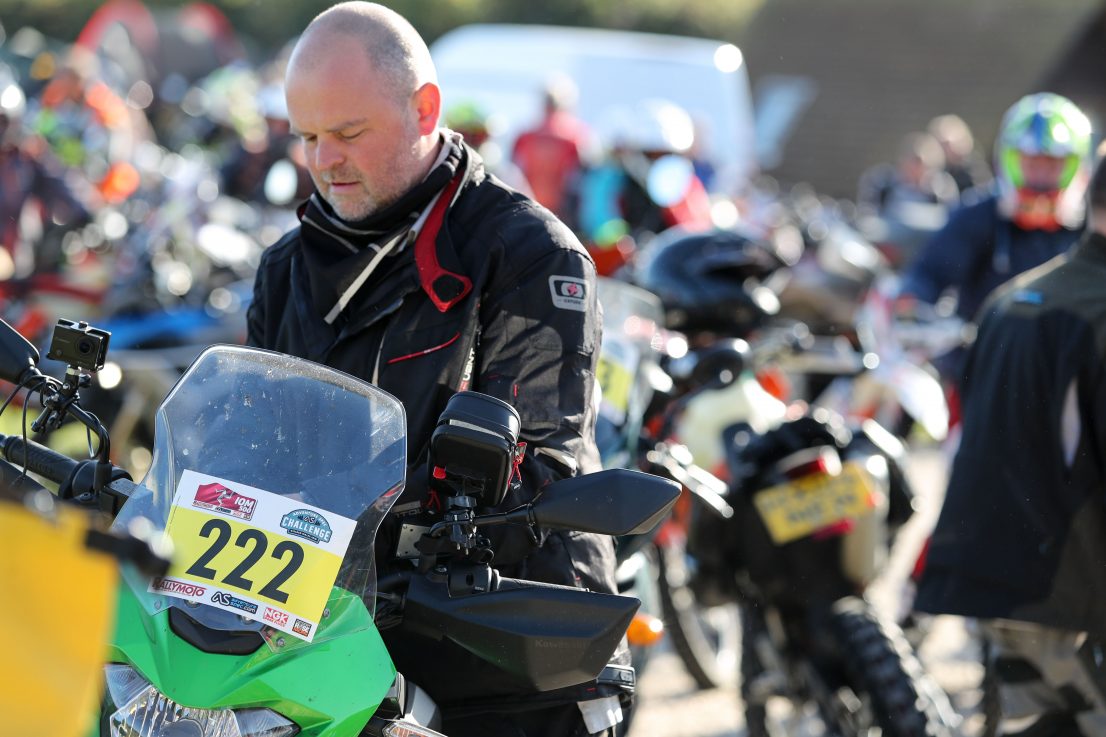 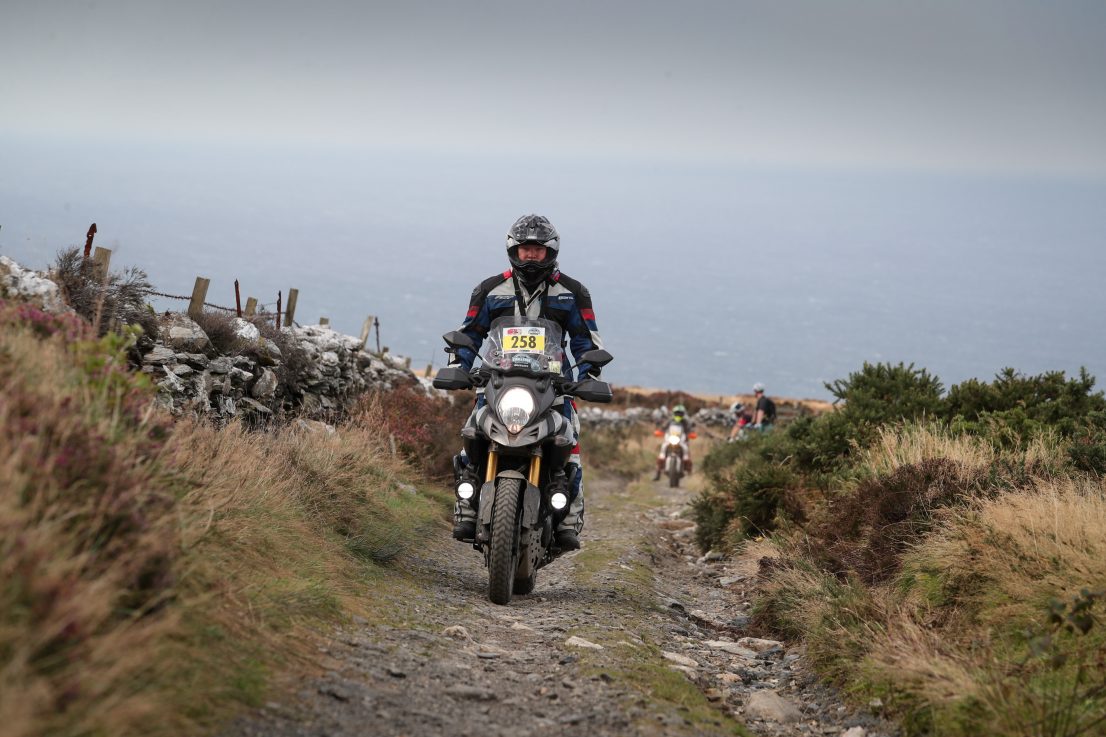 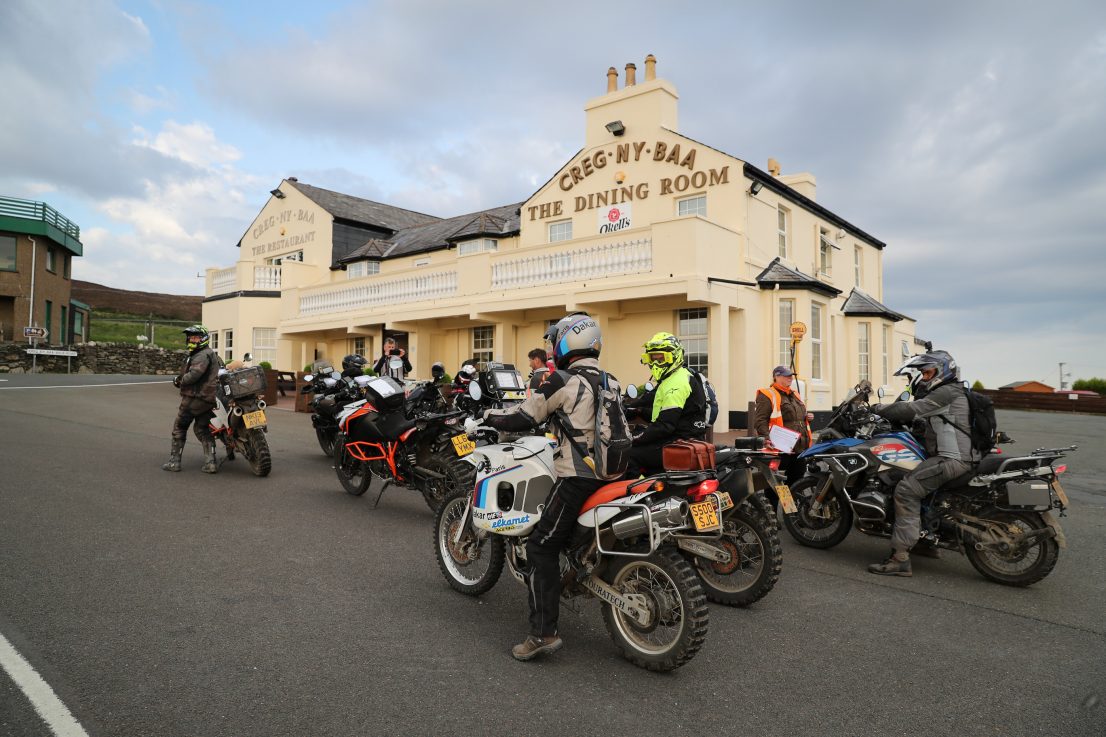 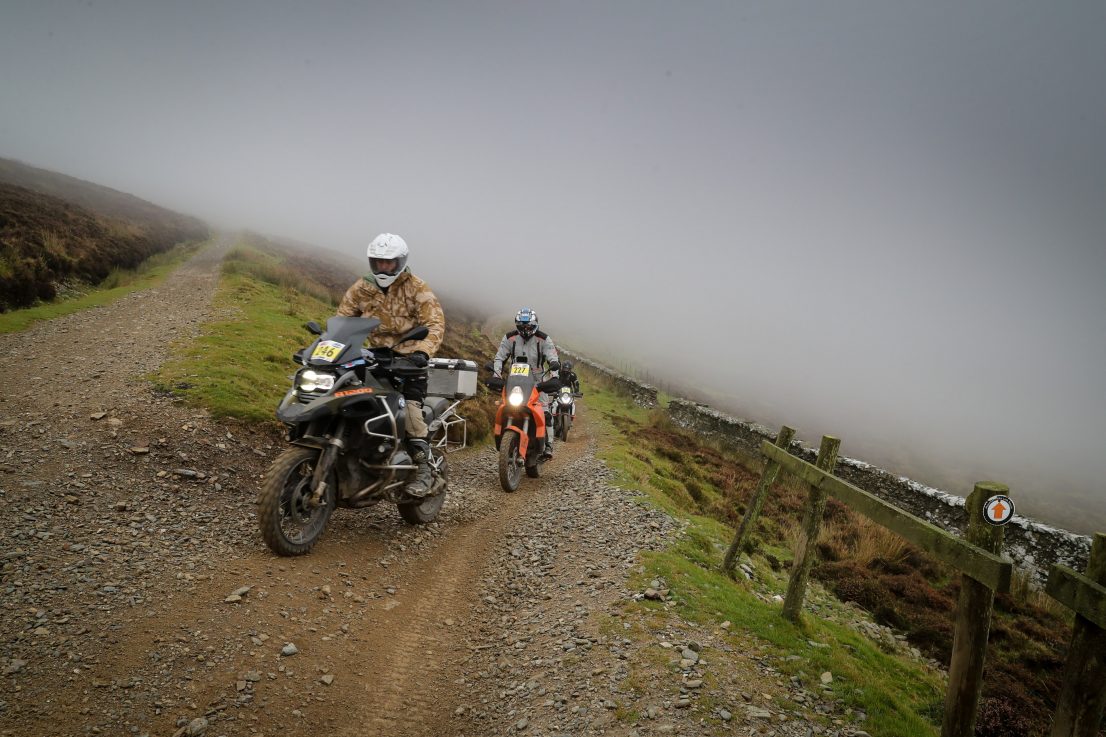 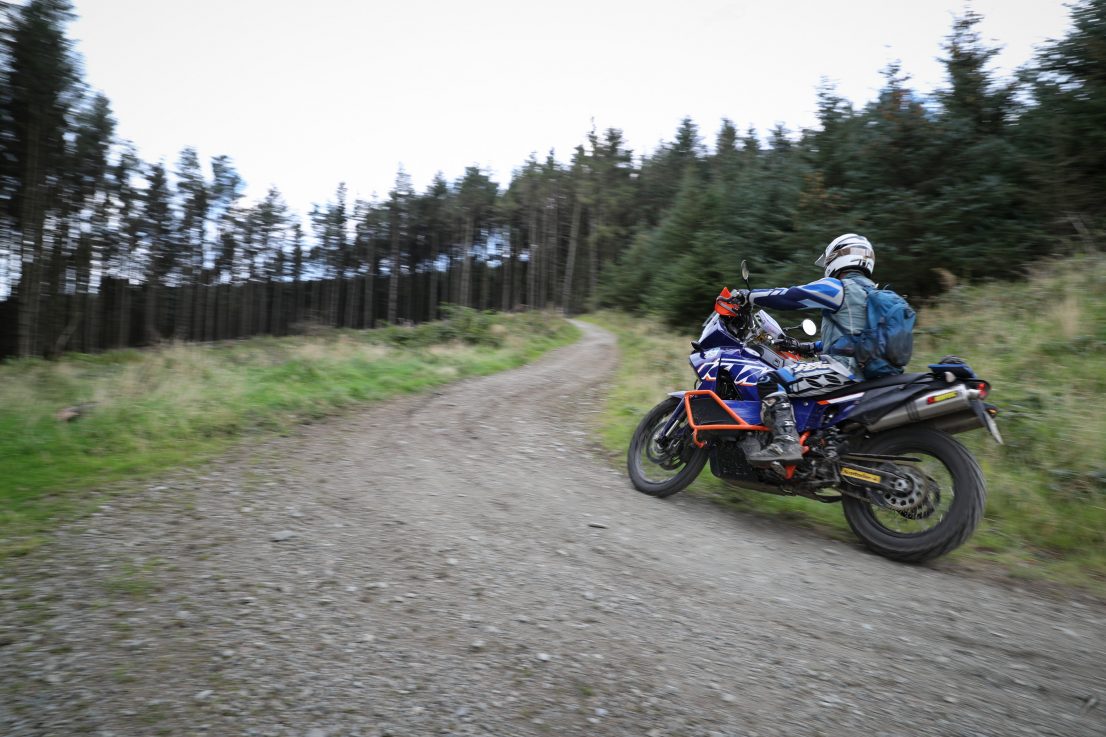 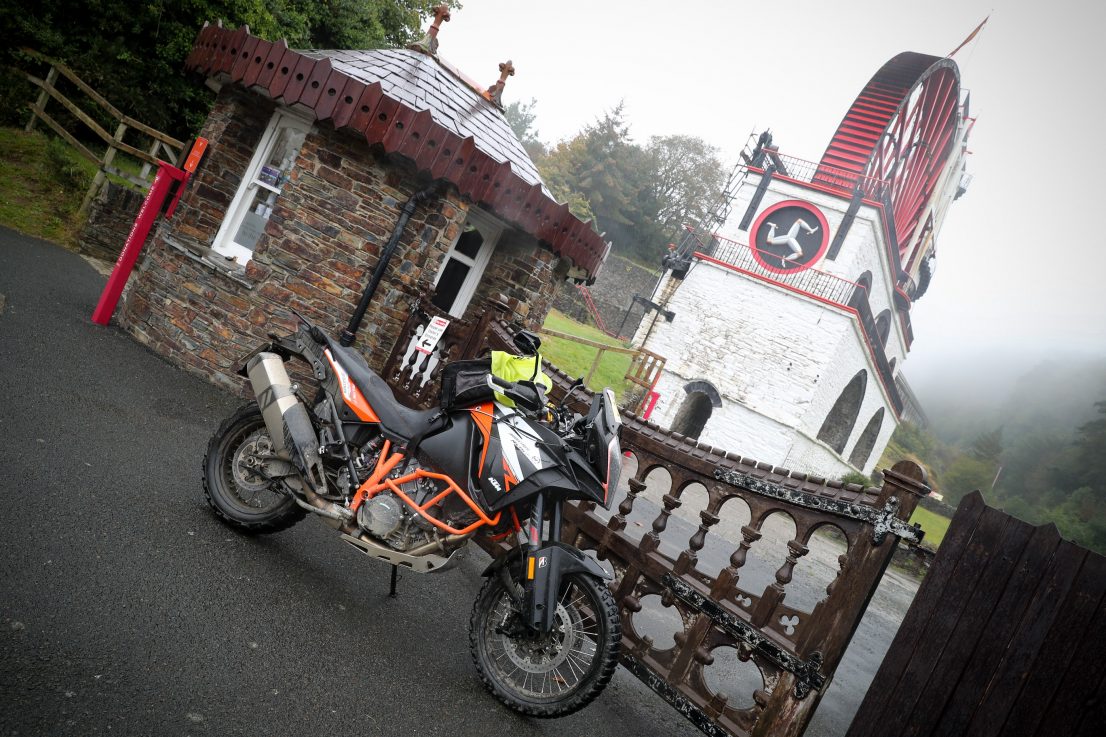 After reaching Calf of Mann at the bottom of the island, JB then teamed up with Tiger 800 riding Darren Williams and given odometer and roadbook issues (having done a poor job of revising the roadbooks in the morning) this pairing rode the next section with one calling – literally – the distances while the other read the roadbook. Hey, it worked.

Such was the length of the ride, when this pair got to the bottom of the island’s highest mountain, Snaefell, along with others they were instructed to take a shortcut back to the finish, or face the prospect of an after dark finish. Rally Moto certainly offer plenty of riding!

Day two was a repeat of day one, only in mist (sometimes choking fog) and rain. Actually given reasonable waterproofs – and heated grips – this was no less enjoyable. A little more attention was needed on the now slightly slippery trails, and even more so on the roads which – off the TT course itself – turned super-slippery. A few riders took tumbles, nearly all on the roads.

Riding with Clint Smith and Reuben Molina on a [air of BMW R 1200 GSAs), JB had a great day’s riding. And keeping the pace going – now knowing the distance – the trio made the full distance. In the evening prizegiving JB scored a gold medal for his efforts, although in the final official results this was downgraded to a sliver medal – that shortcut at the end of the day one probably!

In all a great weekend, having fun with a bunch of like-mined guys (and the odd gal) on a beautiful island. All the riding you could want over stunning scenery. And some great Manx teas and cakes along the way (not to mention the dinners and beers). It’s a must-do, for sure. 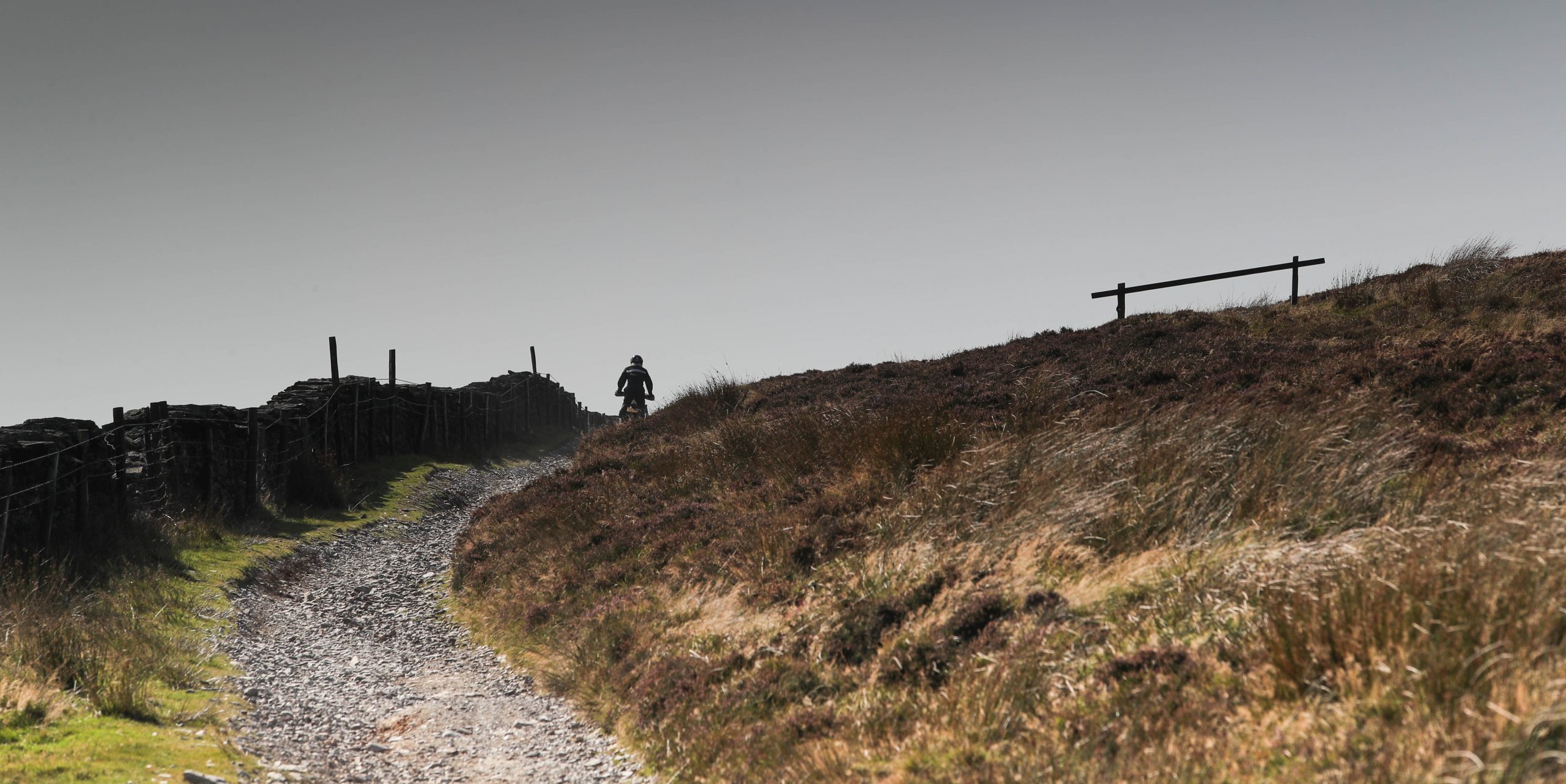 Up until the arrival of Covid-19 the Adventure Spec Challenge was back for 2020, again with three rounds: Kielder 500, Wales 500 and IoM 500. Series organisers Rally Moto also had a complementary Cannonball Adventure series (six dates), that offered a shorter distance one-day roadbook experience (but equally on and off-road, and big adventure bike friendly). There was even an expedition to Portugal in the offing. Oh yes, and a night roadbook event up in Kielder! How much of this will now be possible, if any, we’ll have to wait and see but if you want to know more check out the details and look for updates at www.rallymoto.co.uk.