Back in RUST 42 we tested the Triumph Scrambler 1200XE. We loved it. It brought a fresh mix of adventure into the scrambler market. Tall, leggy, damn lusty too, it was pretty irresistible. Until we saw its little sister, the 1200XC (dressed up in the Inspiration Escape clothes), then we had a new desire. That was back in April. Now in September we’ve been out with the XC, and yes, we like this one just as much…

The big difference is in the ‘legs’ (y’know, the suspension), the XC being two inches shorter (and mixing measures here) offering 200mm in stroke as against the 250mm of the XE. They’re still a Showa/Öhlins combination but there’s a sense of downgrading, as you can see by the colour of the fork legs (gold on the XE, black on the XC). But as well there are geometry changes that we shouldn’t ignore; on the XE we’re talking a rake and trail of 26.9º and 129.9mm, on the XC 25.8º and 121mm. And if that wasn’t enough, the swingarm is shorter on the XC, being 547mm as against 579mm on the XE, which altogether affects the overall length of the bike, 2285mm versus 2325mm. All of which should inform the educated rider along the lines of the XC being a quicker steering Scrambler. If it were that simple.

However, the XC’s attraction to us here at RUST is in its modesty. The XE is one big, brash bouncing statement bike, where the XC is found in muted colours (black or a muted green combination) and plenty of black detailing, it’s kind of understated stealth, and us being British, we like that.

But we’re not without a romantic nature and so Triumph’s Inspiration Escape kit further attracts us. There’s not much to it, just handguards, grab rail/rack, LED fog lamps, a flyscreen, and – appeasing our sense of practicality – a centrestand and pannier with fitting kit (just the one pannier, as there’s the high-level exhaust taking up space on the right hand side). Altogether it looks great, you could park it next to Ted Simon’s old RTW Trophy and you could see the shared story – but for sure you’d want to ride this bike over (with respect) Ted’s old plodder, this is a homage to history through supercharged rose-tinted goggles. 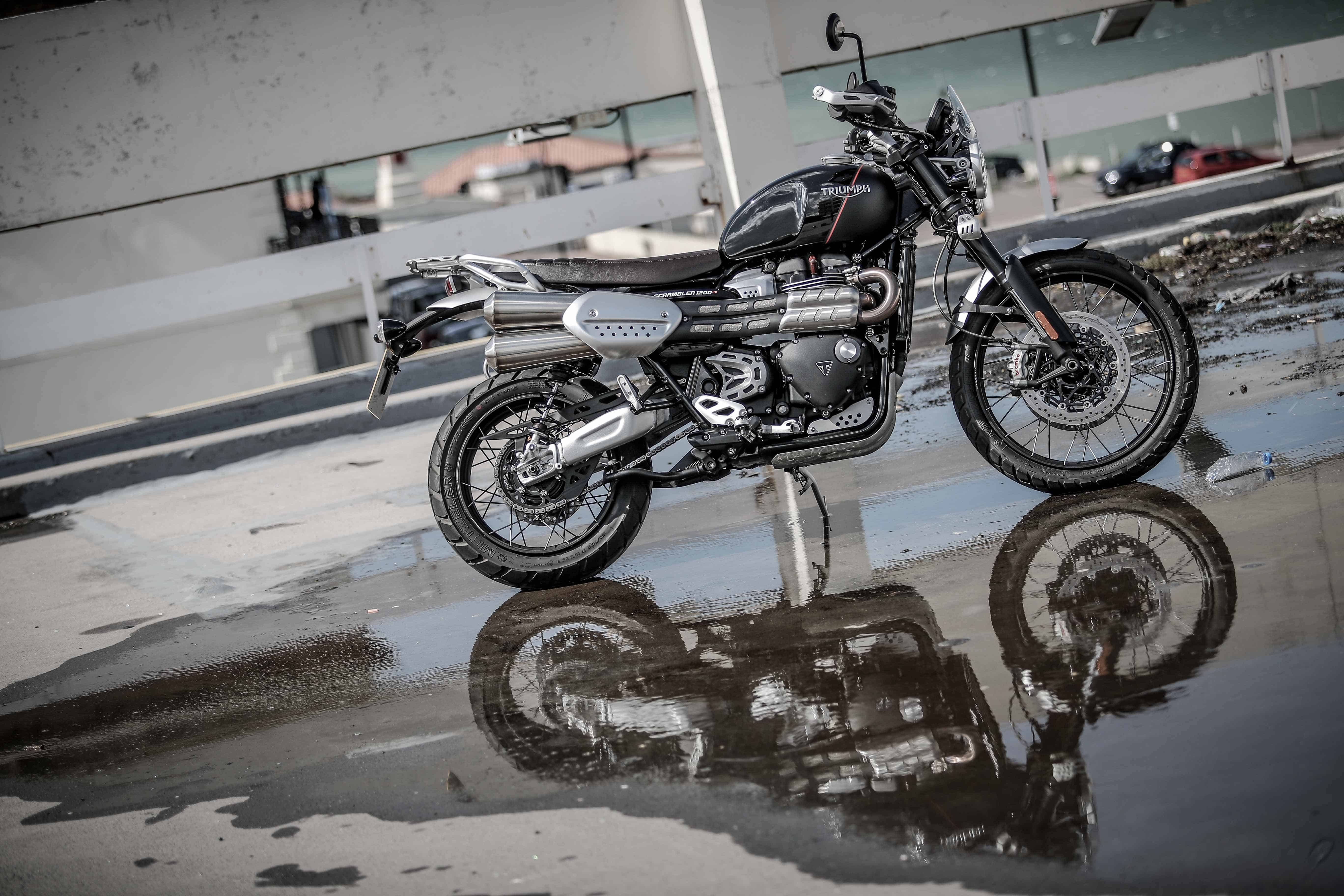 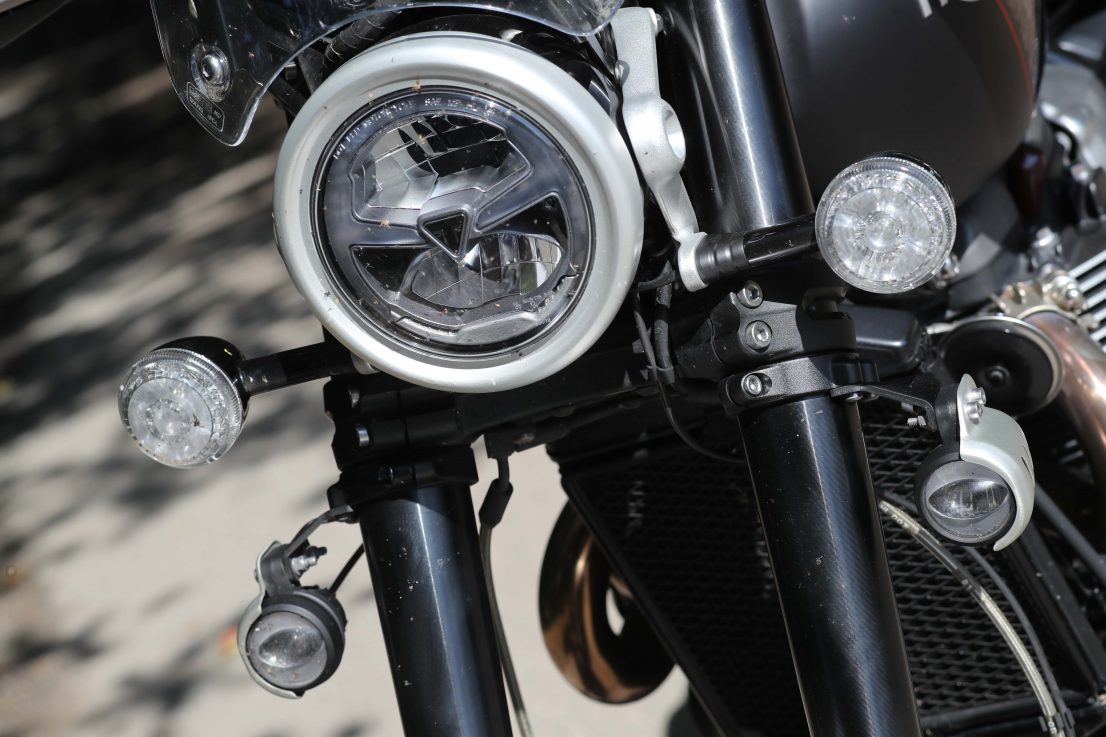 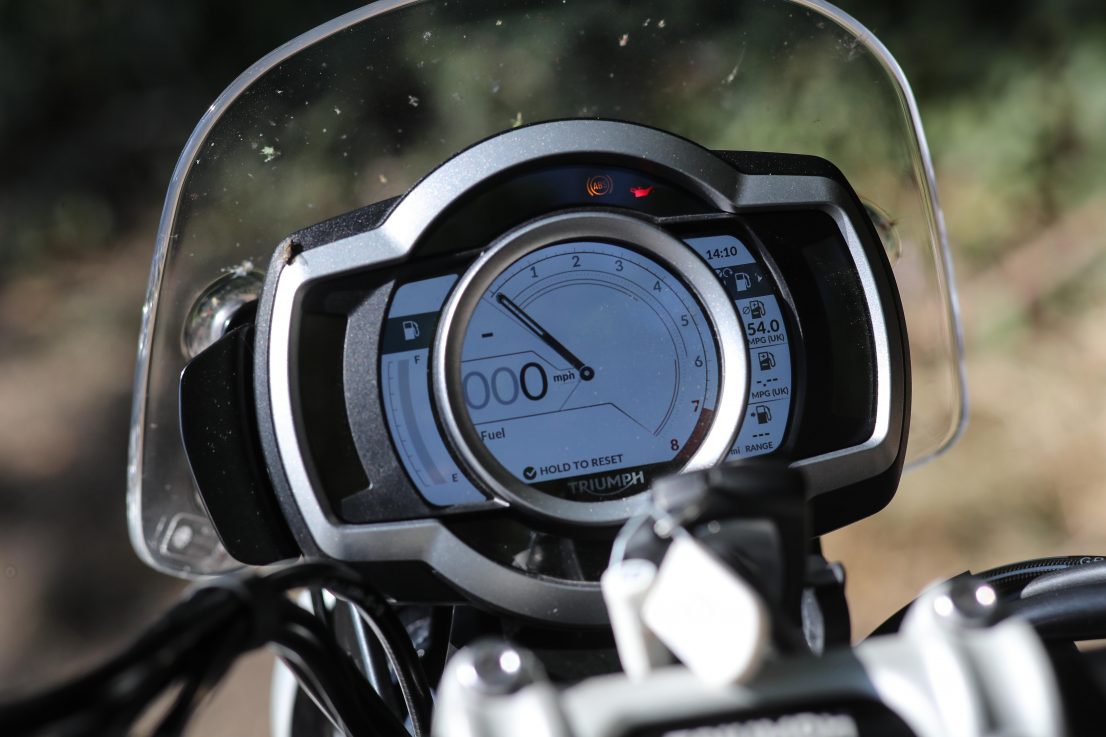 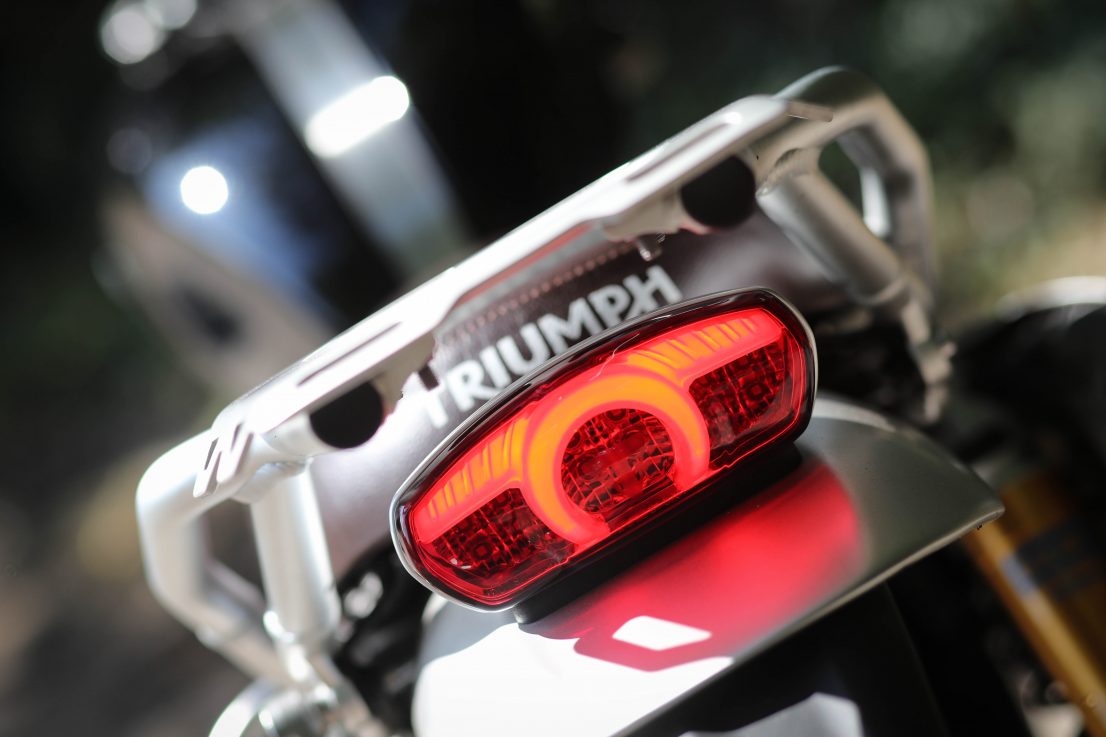 No two rides are the same. We could have cut and paste our ride feedback from the XE test here, but that would be wholly inaccurate as we found quite a different appreciation with the XC.

The engine did a lot to dominate the early impressions. Riding in standard Road (rider) mode, it was noticeable just how punchy and low-revving the Bonneville 1200 motor is. In this mode it almost rides like a power cruiser putting out what feels like gobs of torque from the lowest of revs. Peak power comes at 7400rpm, but it’s the torque that dominates in Road mode and somewhere between 3000 and 5000rpm is where you do the lion’s share of the riding. In fact it stomps so authoritatively that sometimes you’d like a little bit less and there were times I thought the Street Scrambler’s 900cc motor would be an easier, less intrusive ride.

However, when I later swapped to Sport mode the torque stood aside and let the power take centrestage, and I loved the way in this mode it really started tearing up the tarmac, revving hard and fast. Where in Road mode I’d lunge up the road to something like 70-75mph and kind of plateau, in Sport mode with everything happening so much faster, chasing revs with gear changes I’d be smoking along at 90mph before realizing that slight excess of velocity (officer). Once that initial speed fix was over, I liked riding in Sport mode, not for the speed but the lighter and more instant feel to the power delivery. 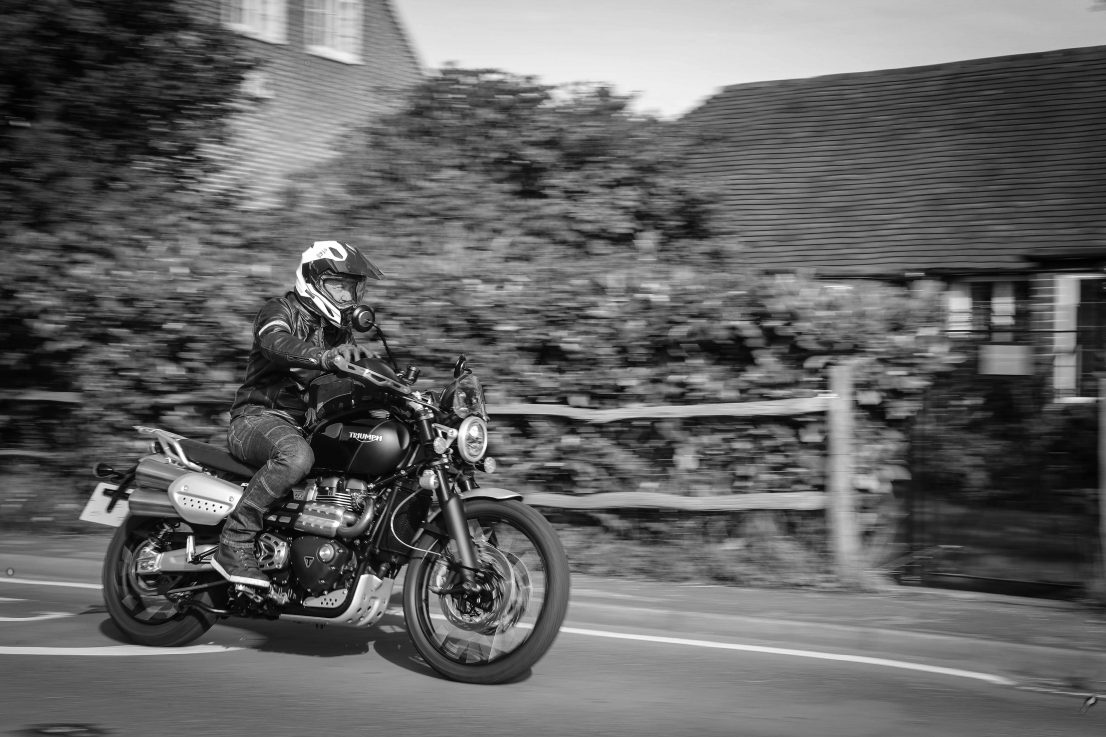 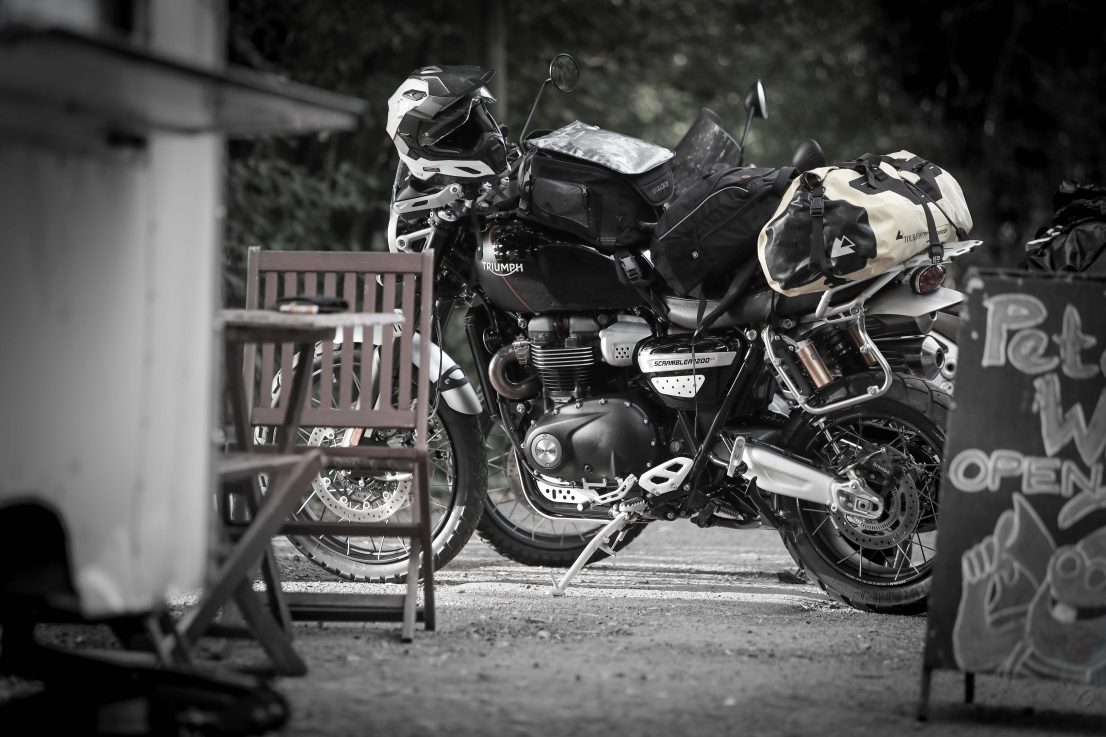 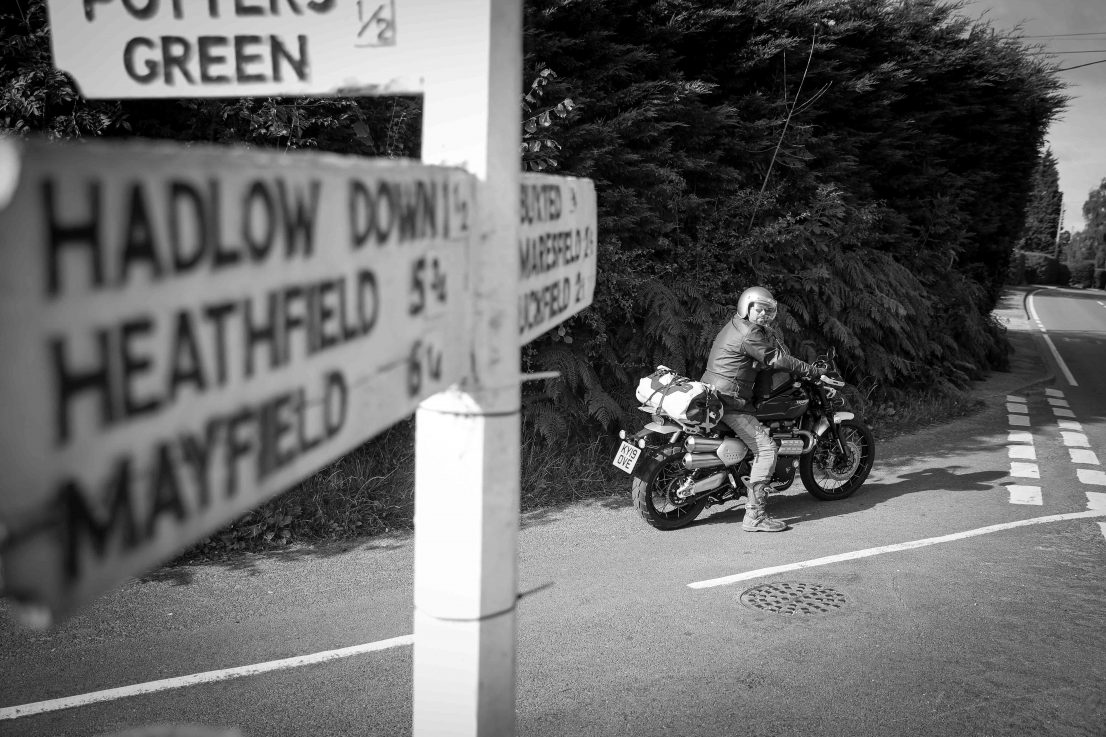 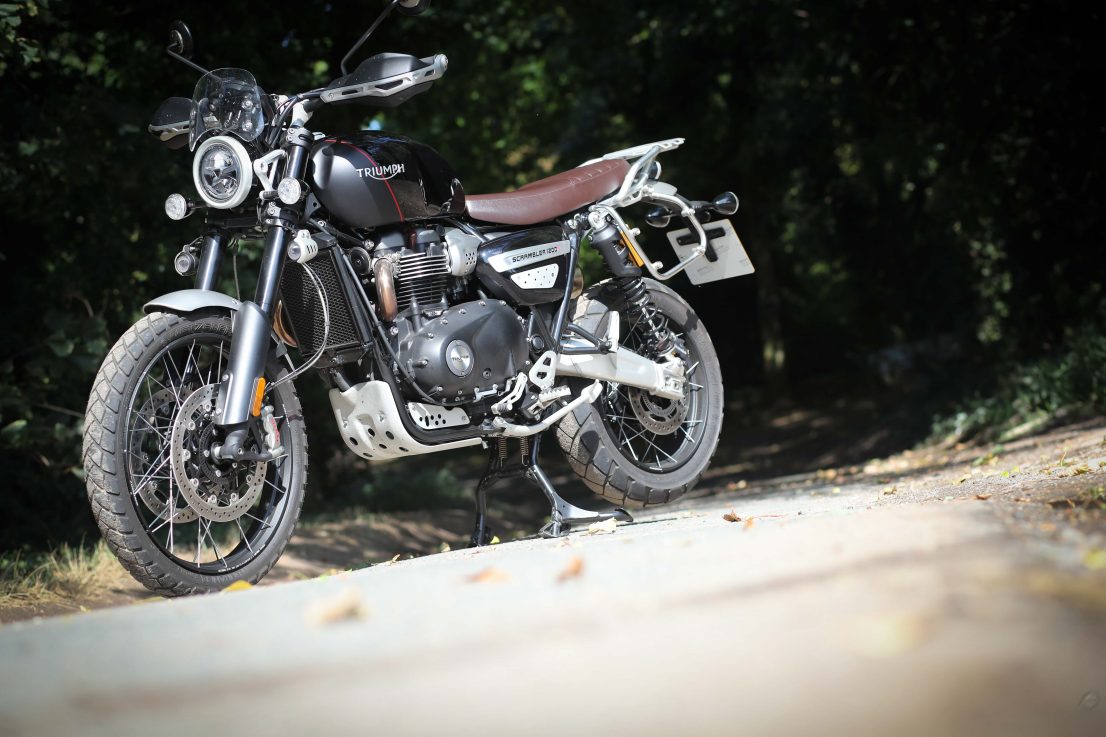 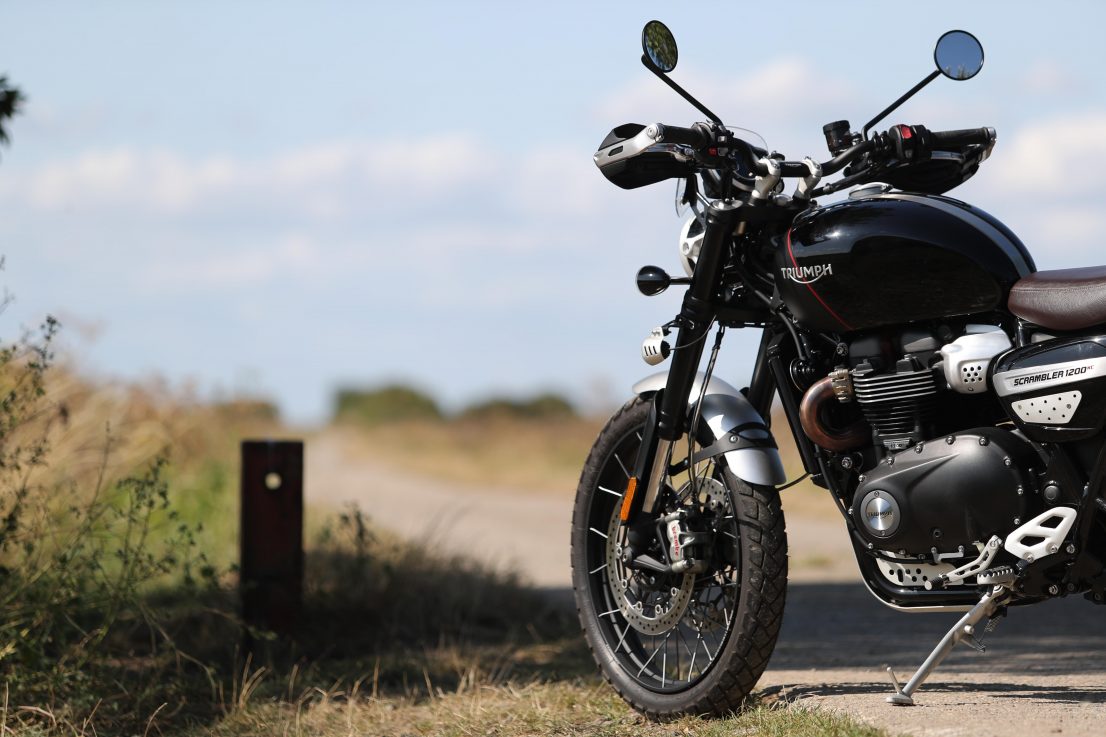 Either way it’s a potent motor. Looking to make an early morning rendezvous, riding briskly cross-country along Kentish lanes at 5:30am, the XC really covered the ground swiftly, and effortlessly. When it came to overtakes it punched past the cars and vans in a snap, making overtakes safer, while those radially-mounted Brembos did a fine job of scrubbing speed when needed for the tighter, bumpier corners.

The flat seat and tallish bars offer a comfortable ride for one. I liked the flat seat as it didn’t dictate where you sat, so you could move around if you felt at all cramped, and it remained pretty comfortable over a concerted near non-stop three-hour ride. The little fly screen can’t do much, but its enough, after three hours of high-speed riding I had no neck or shoulder aches.

I put a pillion on the back for an evening joy ride. That went okay-ish. Not being a stepped seat, and Mrs B not being the tallest, there’s no looking over the rider’s shoulder as pillions can do with stepped seats, and that kind of excludes the pillion from half of the joy in the ride. For longer two-up rides you’d be looking for solutions.

The handling, curiously, didn’t feel as good as I remembered with the XE. Now I expected this model to be better, given the sharper geometry, but it wasn’t. I couldn’t really fault it, for it charges along at a pace through sweepers just fine there’s nothing wrong there. It just felt long and deliberate when turning in and while this next bit sounds bad (it’s not meant to be) there was a bit of a canal long boat feeling when it came to tighter turning, the way the old Ducati Desmos used to feel (well done if you can relate to that comparison!).

Now we had a BMW R nineT Scrambler along for some of the rides and swapping back and forth you could appreciate the BMW turned more naturally and with less effort than the Triumph. That said, when you jumped back on the Triumph you appreciated the well balanced rider’s cockpit, the punch of the Bonneville motor, not to mention the modernity that comes with the TFT instruments, those tasty Brembo brakes and all. No, the BMW wasn’t better, just different.

Doing higher mileages I came to appreciate that the fuel tank is just about the right capacity for this bike. The 16-litre tank should reach a fairly genuine 180-200 miles given the 55mpg I recorded (again mixing measures there). The fuel gauge starts giving you the heebees at about 150 miles, but each refill I found a good five litres still in the tank. With time and bike knowledge you’d soon learn to measure your range off the trip meter instead of the fuel gauge. 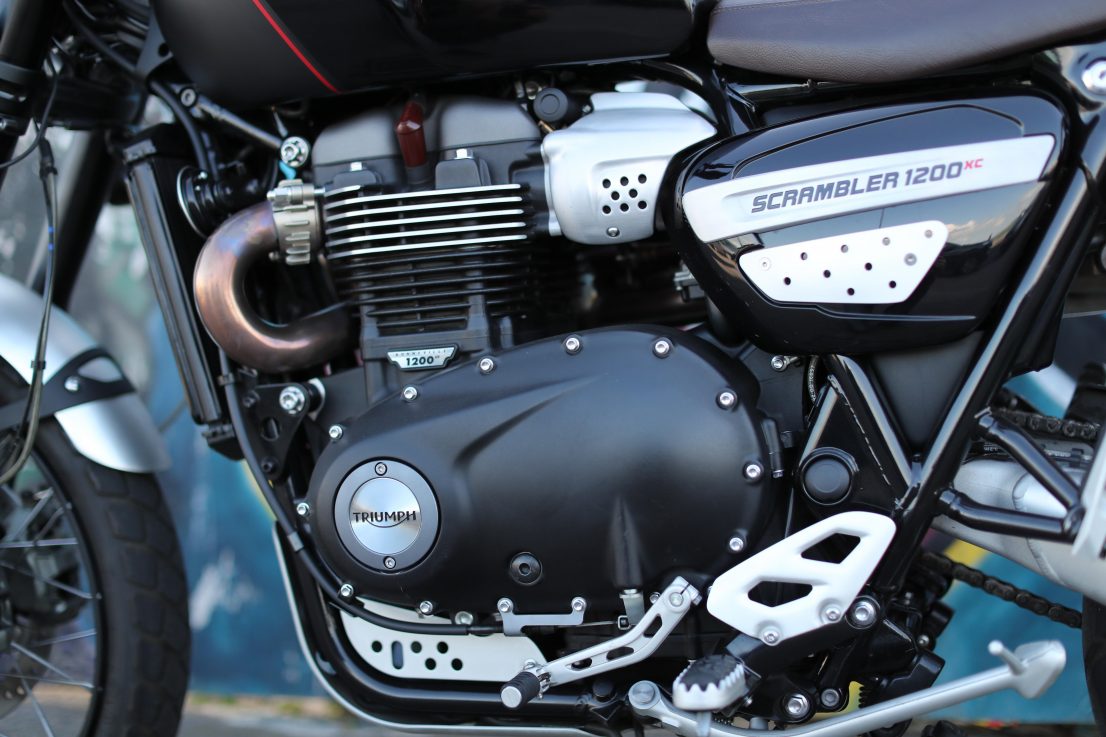 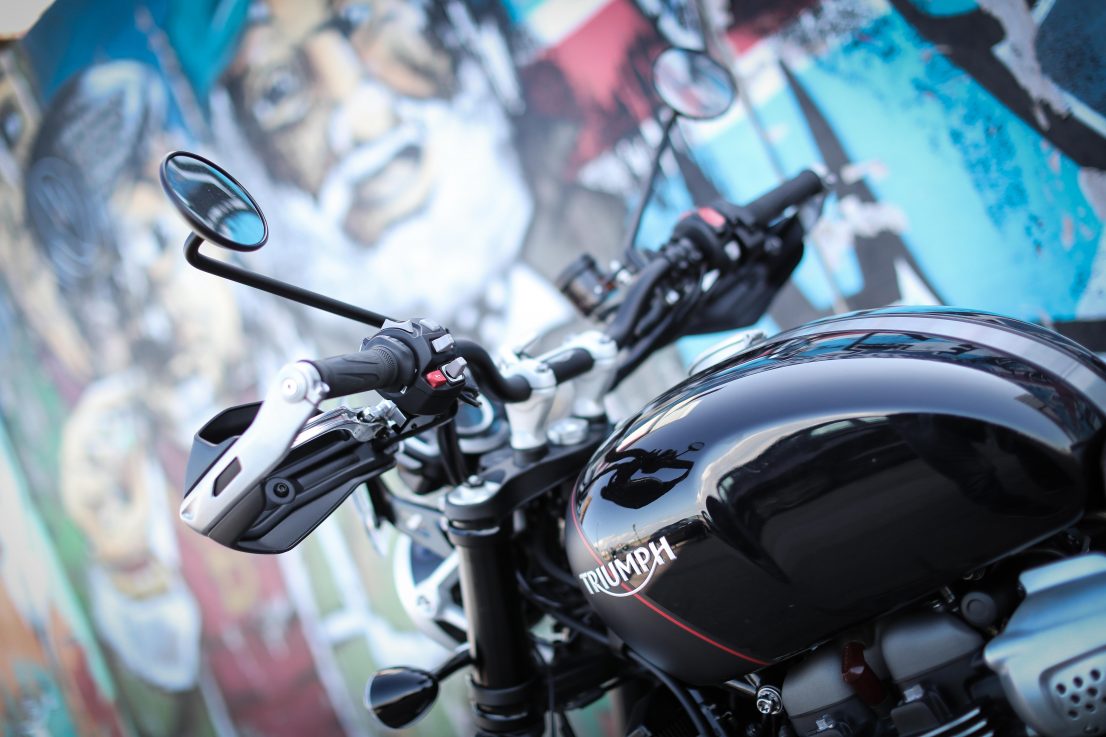 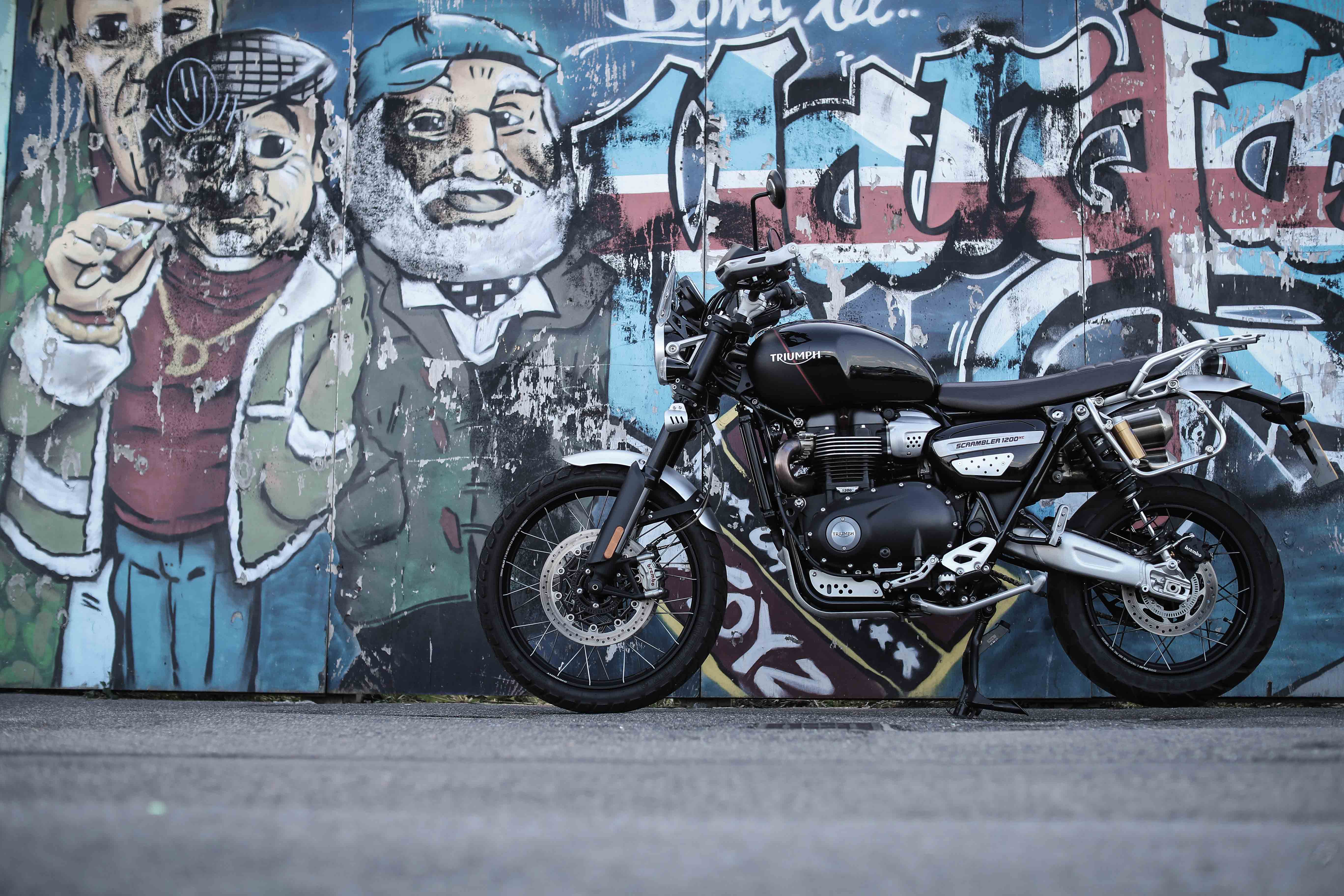 So what didn’t we like? Number one – this being a summer ride – the heat that comes off the exhaust. Being a high-level exhaust is great for the aesthetics (and ground clearance) but the heat that comes off it just roasts your right leg at slow speeds (when the airflow isn’t blowing the hot air away). This isn’t just general heat either, it’s possibly something to do with that coming from the catalytic converters that are hidden under those exhaust guards. Cats operate at some super-high temperatures, like over 600ºC – you would incinerate your Sunday roast at that temperature – and that’s why they’re more typically hidden well away under the bike’s sump. That exhaust also attacked anything that so much at touched it, such as the dangling straps off my tank bag. I worried that the black mess of melted nylon would tarnish the pipes but they were so hot the pipes clean burned the nylon away.

And as much as I liked the TFT instrument screen, a few of the digits – particularly that of the clock – were just too small for a pair of aging eyes.

But that’s it. Maybe over time you could also tire of the conversations you get drawn into over and again when people see the bike, because it is that beautiful.

Yes, it’s a great bike. I think given months of anticipation I’d slightly overblown my expectations. I was hoping it would be my scrambler-adventurer panacea, that I could end my search for the perfect travel bike here. That’s probably never going to happen. But notwithstanding the XC punches high scores across the board. It looks stunning, has a killer motor, oozes quality and plays a respectful historical hand. It’s one great Scrambler. And being a good 30mm lower in the saddle (at 840mm) than the XE it should fit a great deal many more people.

But here’s the RUST thinking. The Scrambler 1200XE – superb, leave exactly as is. The Scrambler 1200XC – how about a 19” front wheel and low pipes, after all this is meant to be the less extreme bike? In the meantime, if this bike was mine (sorry ‘ours’, we’re a collective here at RUST) I’d (we’d) swap out the exhaust for a de-cat system just to get rid of the heat soak, gotta think it would be safer too. And because here in publishing we inhabit la-la land, what about making a 900XC to the same recipe? (ie a Street Scrambler with 200mm suspension.) That’s a lovely engine and, just as with Yamaha’s CP2 motor in their XSR700/Ténéré, sometimes there’s a refined delight in the smaller motors that also suits better the long gentle ride…? Like I said, this is la-la land.

But in the meantime, still, one thing we can say unequivocally: the XC remains hands down the best-looking Scrambler on the market. Triumph design is top of the class. 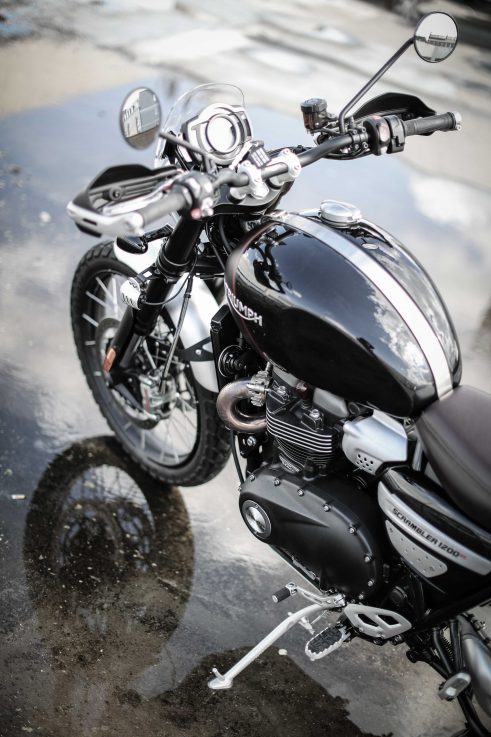 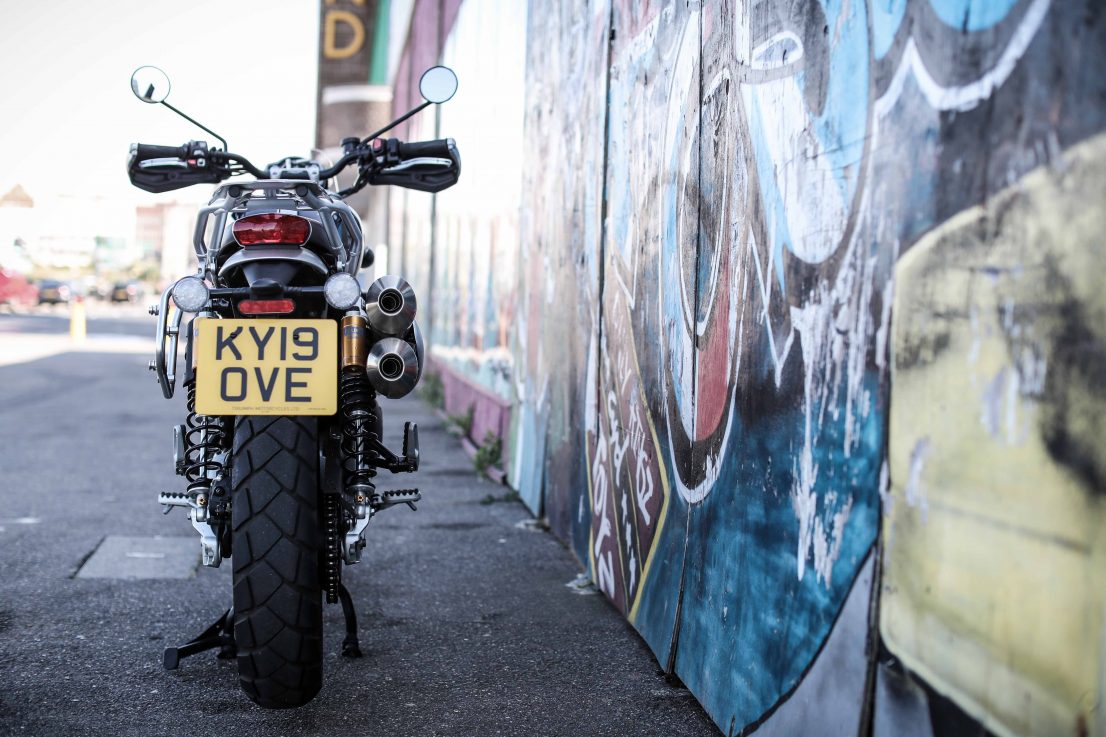 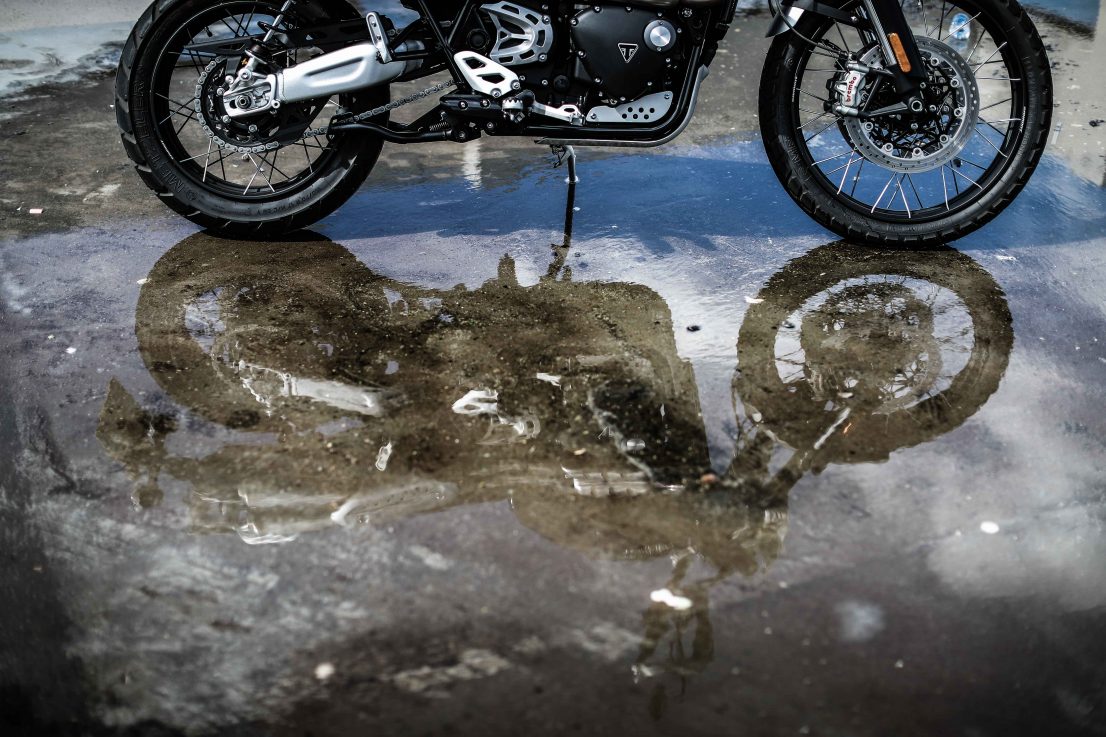 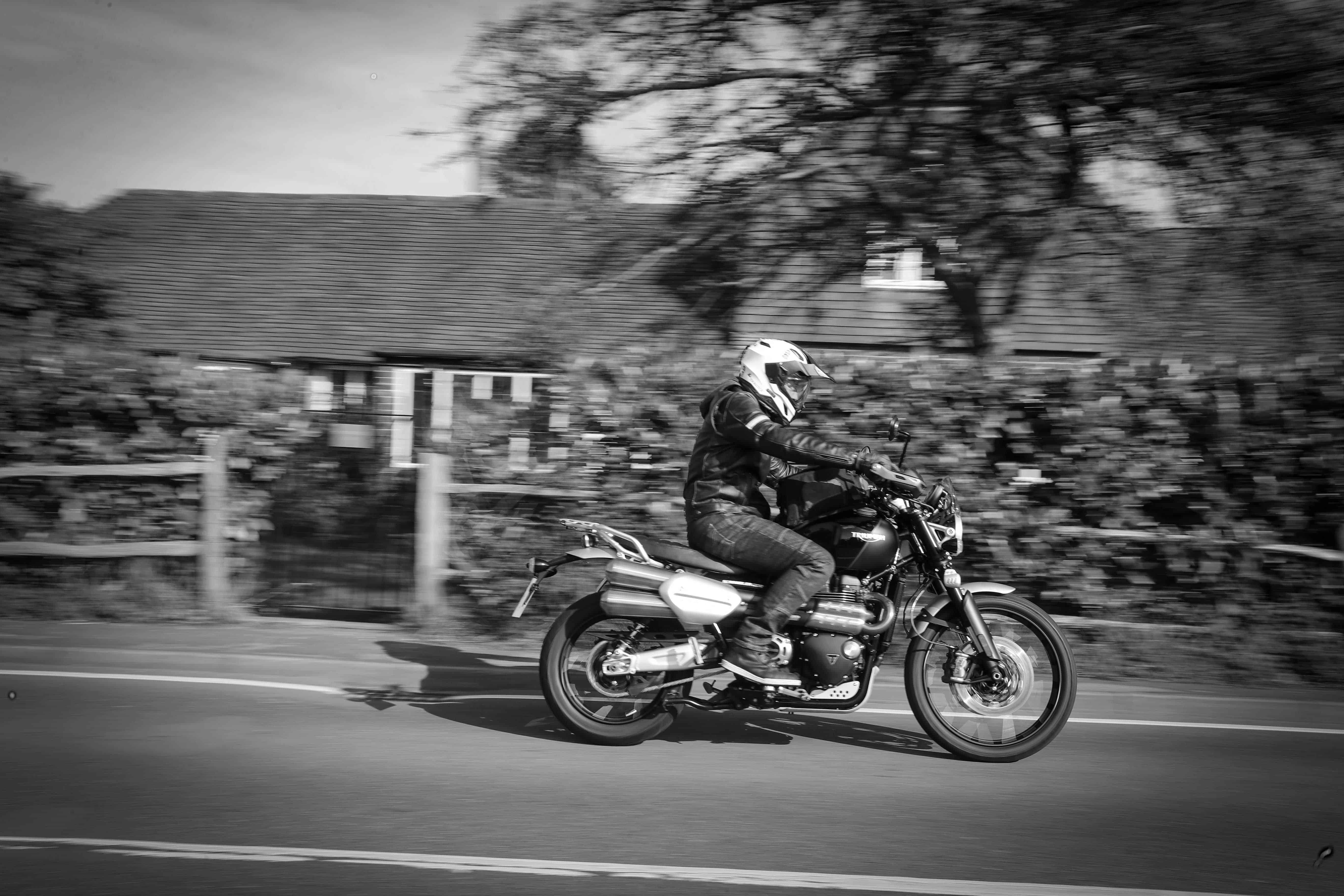