The modern, lightweight trailbike makes a welcome return in the form of the 2011 Rieju Marathon 200. RUST took one out on marathon trail ride to find out more…

The looks on their faces said it all: What in the hell’s that thing they all wondered as we unloaded the Rieju from the back of the van. Riders gathered round, pointed, poked fun at its skinny motor and skinnier tyres and tried to get their tongues around the name. ‘ReeAyyHoo’  we said. ‘Whatever’  they said, then went back to prepping their big KTMs for the trail ride ahead.

I love bikes like this: bikes that don’t conform to the regular pattern of buyers’ needs. For instance this is a 200cc four-stroke. Who needs one of those? A restricted (sub-33hp)  licence holder perhaps, no-one else springs to mind. But to my way of thinking that just makes this bike all the more interesting. After all, the established capacity classes (125/250/450)  are an anachronism, put in place by the FIM (under pressure from Japanese manufacturers)  in order to sell more motocross bikes. Who cares if this bike doesn’t fit any of the specific capacity classes? Are they relevant to my own particular speed/weight/ability and needs? I much prefer the idea of buying a bike that’s right for you, rather then one that apes an irrelevant and outdated motocross class. Besides the actual capacity of this machine is 183cc, not far off the old classic XL185 trailie. I kinda’ like that.

Rieju are a Spanish manufacturer that’s been building bikes for more than half a century (that’s considerably longer than the likes of Gas Gas for instance),  and indeed the company’s origins date all the way back to the 1930s, so they’re not exactly a Juanny-come-lately.

Nevertheless their products are little known outside their native Spain, since they tend to concentrate on building small capacity learner bikes for their home market. Nevertheless this isn’t the first Rieju we’ve ever tested – who can forget RUST’s infamous test of a Rieju 125 Tango ‘café-trailie’  which we entered in a Long Distance Trial near Wales (‘Lost Tango near Powys’),  having ridden it to the event from 80 miles away!

However the Marathon MRT200LC marks a change in direction for Rieju – at least as far as UK buyers are concerned. Because these bikes are powered by modern Yamaha engines and are more like the machines UK customers are interested in. For instance the four-stroke engine in the Marathon 200 tested here is the exact same motor that powers the latest Yamaha WR125/R125, except that it has been bored out to a rather more useful 183cc capacity. Unlike a lot of small trailies that use ancient, slow-revving, air-cooled lumps dating back to the last century, this bike packs an ultra-modern, super-compact, smooth-revving, liquid-cooled, four-valve, twin-cam, electric-start motor with a six-speed transmission. Cooool. 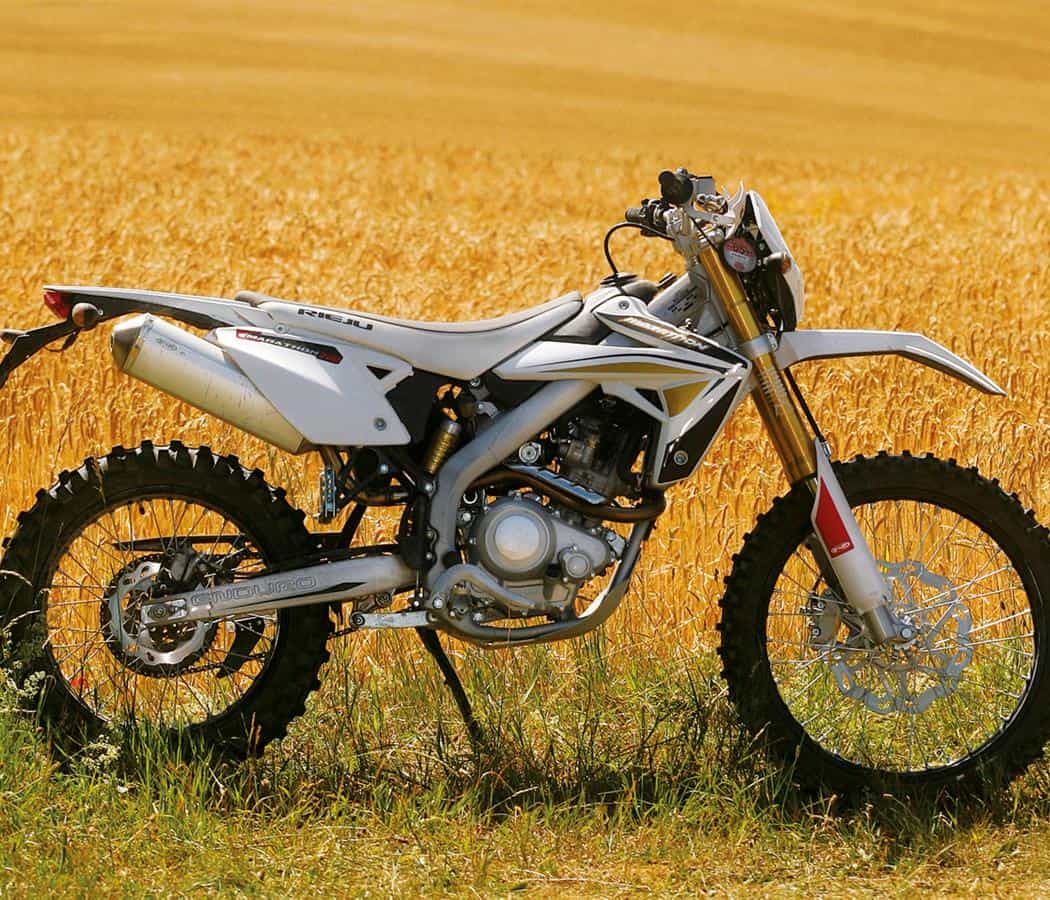 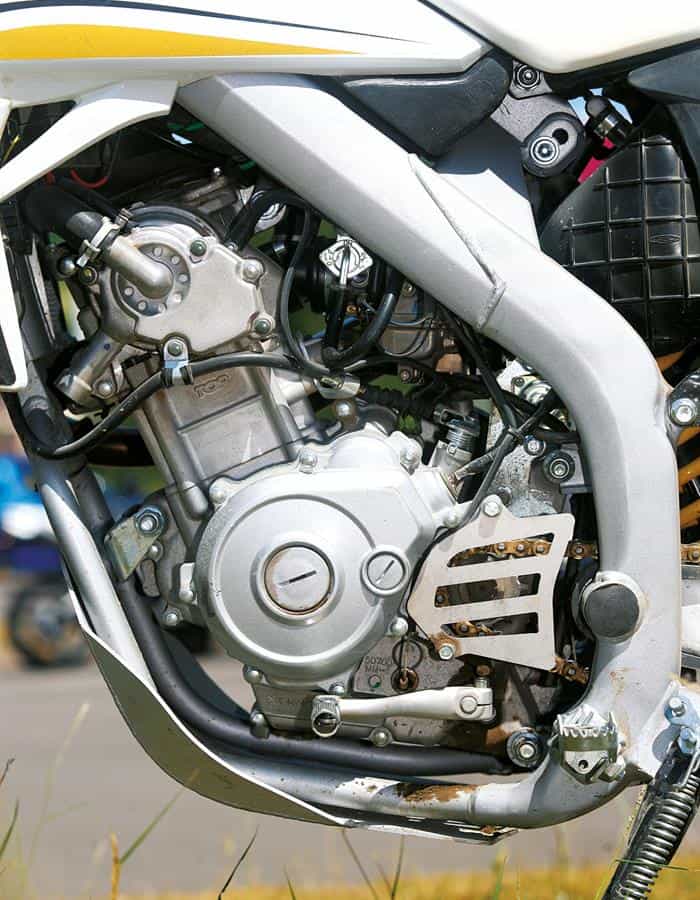 The rest of the bike is pretty much what you’d expect of a modern trailie of this ilk: steel perimeter frame with detachable sub-frame, 40mm (unadjustable)  USD Marzocchis, linkage-operated (unadjustable)  rear shock, aluminium swing-arm, alloy bars and standard-fitment handguards. I particularly like the smart white and black colourscheme, though the bikes also come in blue with black, or red with black.

It’s not an enduro bike mind, so don’t expect it to behave like one. The suspension – perfectly adequate for the trail – is not set-up for fast-paced riding, and neither is it meant to be. The engine, while pleasantly torquey and sprightly enough, doesn’t offer the instant zip, nor performance of a race bike, and the handling is not quite in the KTM league. Good thing too, because this bike is not a pseudo race machine, it’s a proper little four-stroke trailie. Designed to be quiet, refined, capable AND comfortable, it tramps along the trail at a reasonable clip without chewing up the ground, scaring the wildlife or unsettling its pilot. And of course it’s equally at home on the tarmac as the rough stuff.

As a trailbike the MRT/LC works very nicely indeed. It starts easily with a key and push-button starter. There’s sufficient power to offer a choice of gears on even fairly steep climbs (it stormed up Hampshire’s infamous Butser Hill in third),  and gearing that will comfortably crack 60mph on the roads. And though it can’t really match the pace of a 250 thumper, it’s not that far behind.

It’s frequently the case that budget trailies such as this, are let down by either poor detailing, or else a riding position that’s too road oriented to work well on the loose (small pegs, protruding components that catch your boots when standing up etc).  I’m pleased to say the Rieju was neither. In fact the riding position felt more or less ideal; the seat/tank/frame are suitably narrow and the saddle is not ridiculously firm – even after 140miles of trail riding I could still sit down without grimacing. All that much. The pegs are broad enough to properly support your weight, and the alloy bars are a reasonable bend. Even the digital dials are easily read on the move, yet well tucked away.

I guess if you’e much taller than about 6ft you might find the Rieju a bit on the small side. Like most sub-250cc bikes it’s ever-so-slightly scaled down from a regular-sized dirt bike with a wheelbase of 1395mm (that’s 9cm down on a typical enduro bike),  with a correspondingly low seat height of 900mm (35.5in)  -approximately an inch lower than normal, though thanks to an optional top-shock mount, there’s the possibility of lowering the bike by a further half-inch by bolting the rear shock in a different position.

Other stuff worth mentioning: it has a kamikaze flip-up sidestand, regular air-filter access (by removing the seat),  a 6.3 litre fuel tank, an alloy silencer with stainless steel header, and weighs approximately 115kg fully fuelled. Oh and we managed an easy 80mpg in mixed riding, which gives the Rieju a comfortable 100 mile range.

Our route for the day was pretty varied, but included plenty of interesting lanes, a few good rocky tracks and a mixture of ruts, single track and chalky climbs. Certainly there was nothing that caused the Rieju any difficulties at all, because what it lacks in outright power it more than makes up for with fluid handling, decent manoeuvrability and excellent grip. It’s one real weakness however, lies in its suspension.

At moderate trail speeds the Marathon’s suspension works just fine – tackling the bumps with a certain firmness that feels reasonably composed if a little bouncy (bikes like this generally come set up on the soft side).  But push speeds up a little, and you quickly realise that what initially felt like firm suspension, turns out to be just firm springing. The corresponding damping isn’t quite there to back it up. With a touch too much spring and not quite enough damping to really control the hits, the MRT200 feels slightly choppy through the bumps. It’s not terrible by any means, and it’s really only something you’re aware of, rather than it particularly affecting the way you ride, but it does just limit your speeds on very rough going (especially whoops). 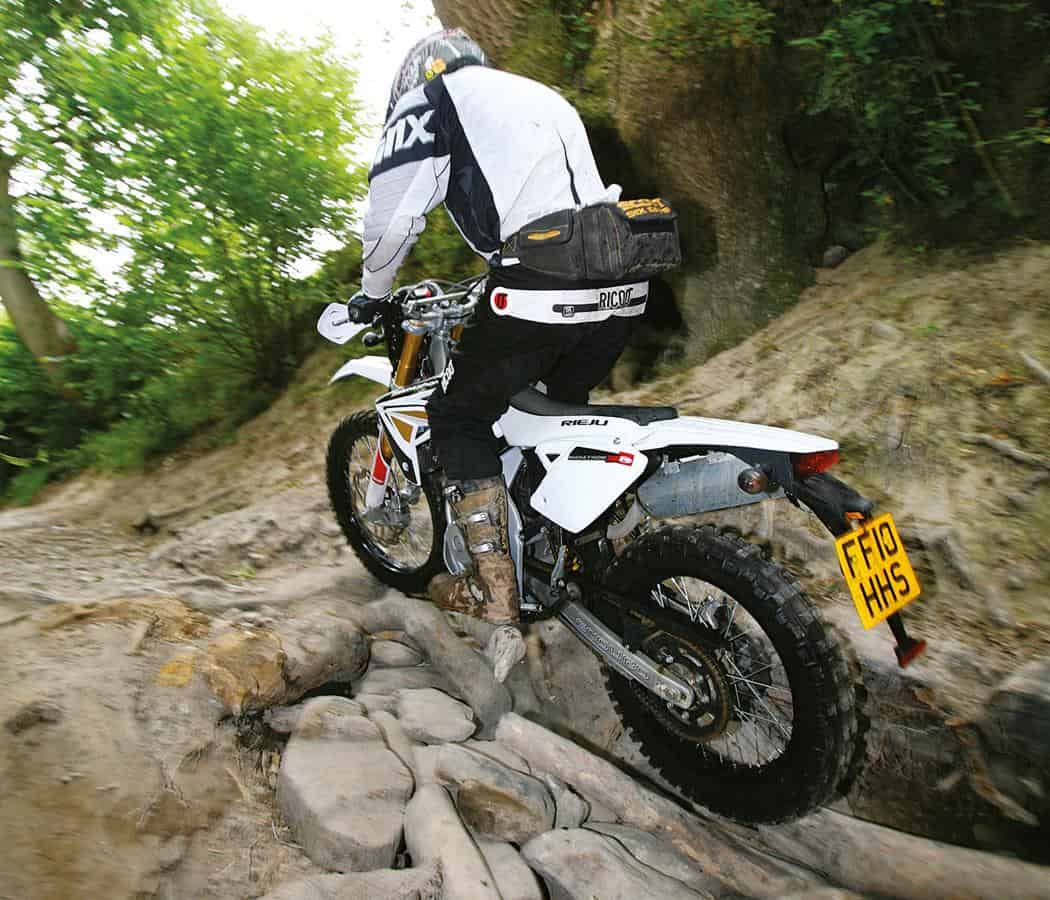 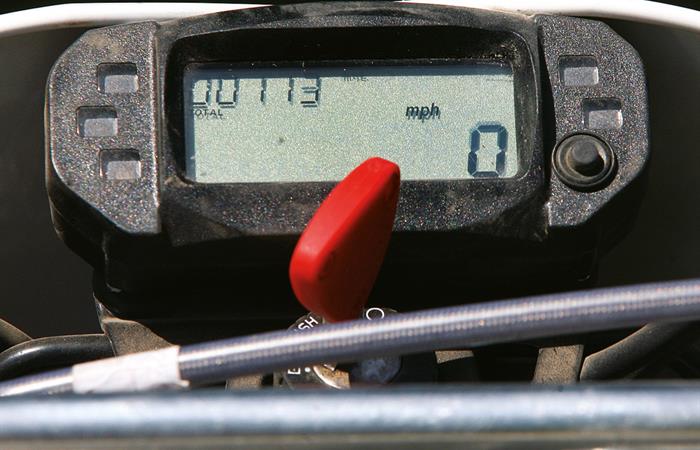 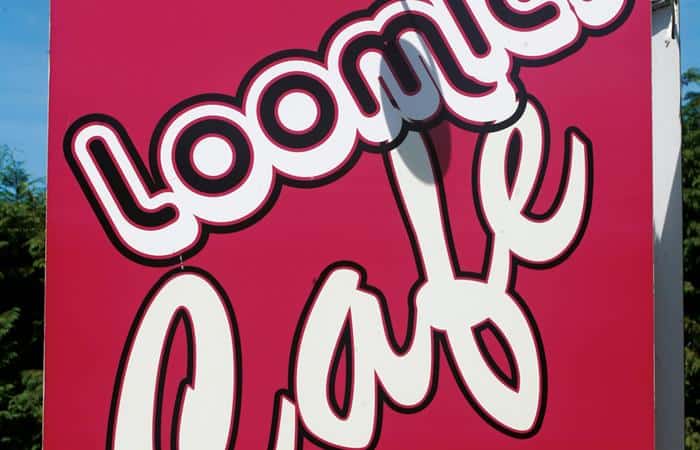 And sadly, the suspension has no built-in adjustment, so your only real option is to experiment with differing oil height in the forks, or get the units revalved if you feel they’re not quite up to snuff. In their defence Rieju say that you can order the bike with full ‘enduro’  spec units if you require, but obviously this ramps up the cost of what is essentially a budget dirt bike.

So how can we claim the Rieju has fluid handling if the suspension feels ‘choppy’?  Simple really, it does handle very easily – a short wheelbase and the light overall weight see to that – plus there’s very little inertia from that small capacity motor to really upset things, so provided you don’t push too fast on the trail, the handling feels good.

Part of that good handling comes down to the Rieju’s compact little powerplant. There’s no getting away from the fact that you’re riding a sub-200cc bike, yet despite the engine’s limited capacity, one of the best things about it is the abundance of torque it delivers. It’s not low-down thump like that produced by a big capacity motor, yet there’s plenty of willingness to drive from way down low. This engine is no staller and the Rieju is more than happy to amble along on very low revs indeed without having to work the clutch. And despite the fact that it will rev beautifully up top (unlike a lot of old school two-valve motors),  it’s just as comfortable being driven along on a whiff of throttle.

Make no mistake then, this lump is truly excellent – smooth, reasonably grunty, yet flexible in the extreme. Oh and it carburetes perfectly too. Top marks in that department. 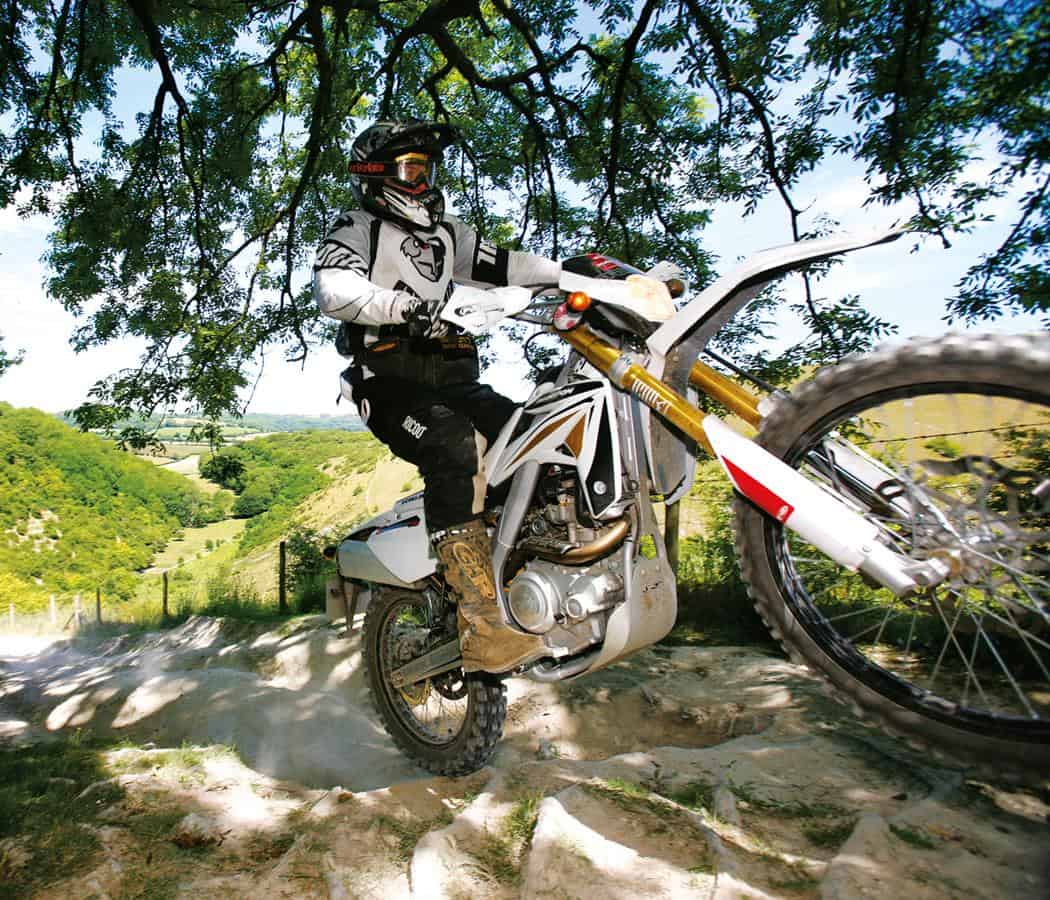 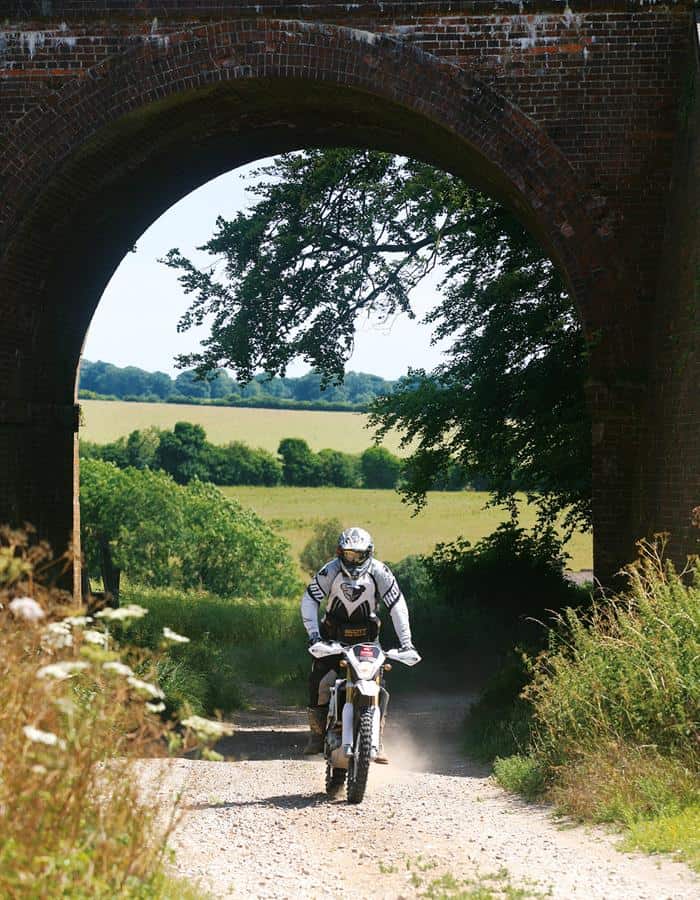 So who is the Rieju MRT200LC Marathon likely to appeal to? Well I’m guessing it’s those people looking for a manageable trailie, that don’t necessarily want a low-seat/low tech machine like a CRF230, but neither do they want the full power of a 250 either. Don’t scoff – there’s plenty of riders that find even a modern 250 thumper has too much ‘go’  for them. Limited licence holders are another group of potential punters, as is perhaps any novice off-roader, short rider or even older riders looking to trade down.

I enjoyed riding the MRT200, but then I’m not in the market for one. It’s a good looking, nice-handling, well built budget trailie with modest suspension but few other failings. And with a retail price of £3599 (in 2011),  it’s only £100 dearer than a regular 125 Yamaha with the same motor (but less power).

I can’t imagine that there’ll be long lines of punters queuing up to buy one instead of dipping into the secondhand market, but then new bikes come without the worry of previous owners’ incompetence. And I have to say that at the end of our 140 mile trail ride there were a few surprised faces from other riders who hadn’t expected the Rieju to last the distance. Not only did it stay the course, but it was good fun to ride, it never crashed, nothing broke off it, and it only used up about 10 litres of fuel all day.

You can’t really argue with that… 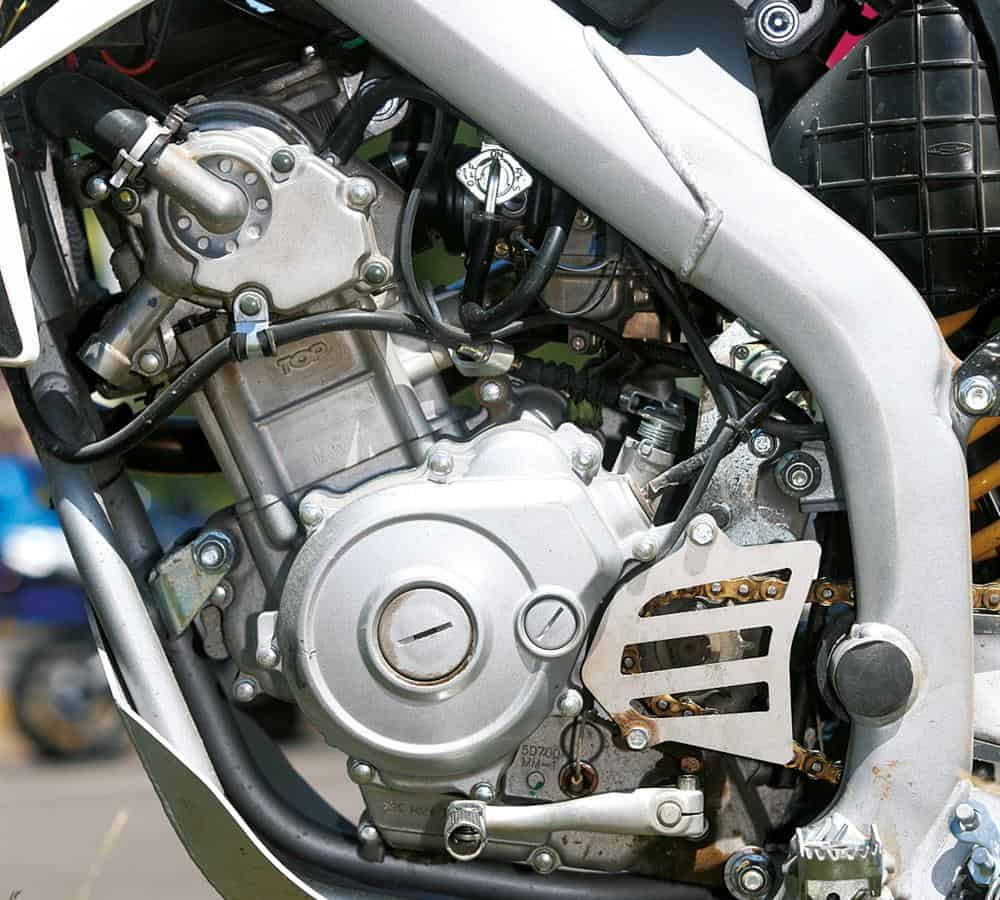 Thanks: to Vince at Haven Trialsport for the loan of the Rieju MRT200LC. If you want to test ride the bike on some glorious west country trails, call Vince on 07736 164705.