The cursor on my computer has been blinking for some time… where to start with my review on the MY2020 Husqvarna Enduro range?

First-off, to those that hold the opinion that the Huskys are white KTMs, let me assure you that this could not be further from the truth. Only a few weeks ago we had the opportunity to test the MY2020 KTM Enduro range in Spain, and now having ridden and assessed the changes to each brand’s enduros these platforms could not be more different. It seems that with each new iteration of the technical and design update the two brands are moving further apart.

You could be forgiven for questioning this statement if you studied the technical and design changes that each brand announced this year. There are a load of shared updates to the two- and four-stroke engines, suspension, cooling systems and exhaust pipes (among others). However, there are also significant updates to each model that are quite unique and translate into a very different riding experience on each brand.

The new Husqvarna enduro range certainly looks the business, the new bodywork is far more intuitive and functional – and visually appealing – than the previous stylings. The bike feels slim and the lowered radiators and shrouds give the models a racier look and feel. I really liked the rear bodywork and the revised pipe connection points. There is more free space and mechanical accessibility on the four-stroke models, and I bet that this is going to make changing out the pipe and shock loads easier.

The grip on the seats has been reduced, based on feedback to Husqvarna that it was too ‘aggressive’ and on longer rides left the riders feeling less than comfortable. This is going to come down to personal preference, but I preferred the grippier seat. I found the new seat not grippy enough and felt like I slipped around the seat more than I wanted to. Husky do offer a more aggressive seat cover for people like me that prefer grip over comfort.

Another factor that will influence the seat choice is the updated and redesigned sub-frame. The changes to the sub-frame, shock and seat result in a marked drop in seat height (20mm). Husqvarna claim that this improves the usability in extreme conditions and I can absolutely see that for riders that are vertically challenged this will be a welcome change, for me the change is less welcome and I would spend additional money to buy a high seat (and gripper seat cover) to restore more suitable ergonomics. To me the bikes felt short in comparison to the previous models as well as the latest KTMs.

The new subframe also introduces more horizontal flex to work in conjunction with the updated shock which features the same linkage progression found in the Husky motocross range. Husqvarna have increased the hydraulic damping and as a result have softened the spring rate on the Xact shock. How this interacts with the added torsional and longitudinal rigidity in the Chrome-moly frame makes the Husky, in my opinion, handle and feel quite different to the KTMs.

As far as the front suspension goes Husqvarna have increased the rake on the front end by 0.7 degrees and it is quite noticeable. While they share the same Xplor forks as the KTMs – which feature the updated mid-valve piston and improved damping – they do not feel quite as stable as the KTM’s did and this I put down the variations in rake, the rear linkage and chassis variance between the two brands.

I rode each of the models on standard suspension settings and uniformly each model across the range, both two-stroke and four-stroke required the rebound damping to be slowed. I settled on between five clicks (four-stoke) and six clicks on the two-strokes. This improved the suspension responses quite markedly. The bikes no longer kicked on hard braking or over rollers or braking bumps, and it helped the front ends to feel more planted. 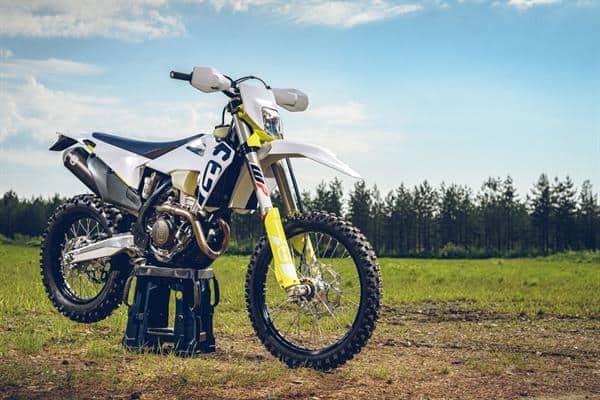 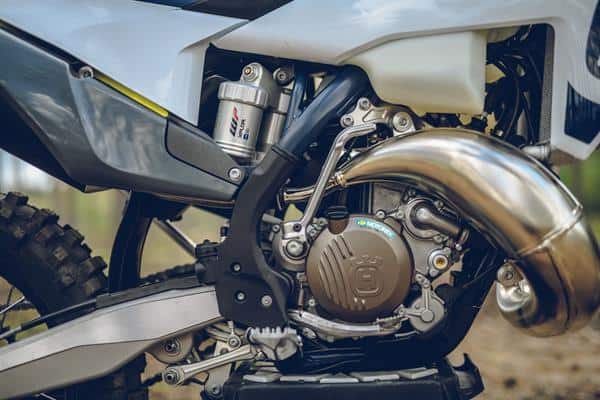 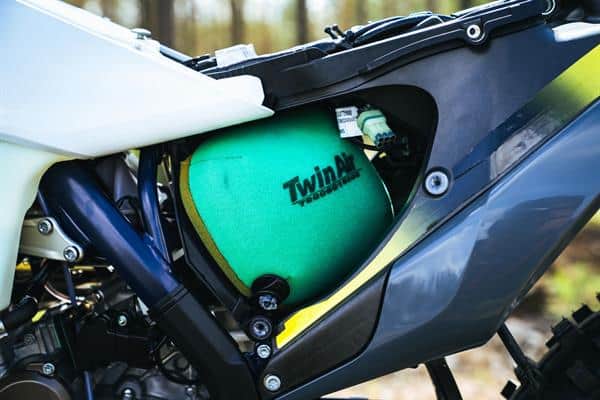 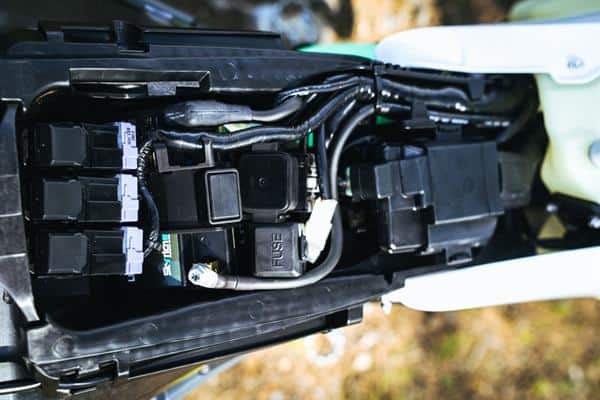 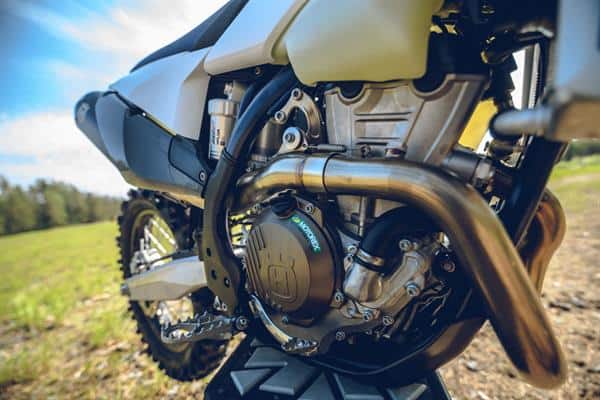 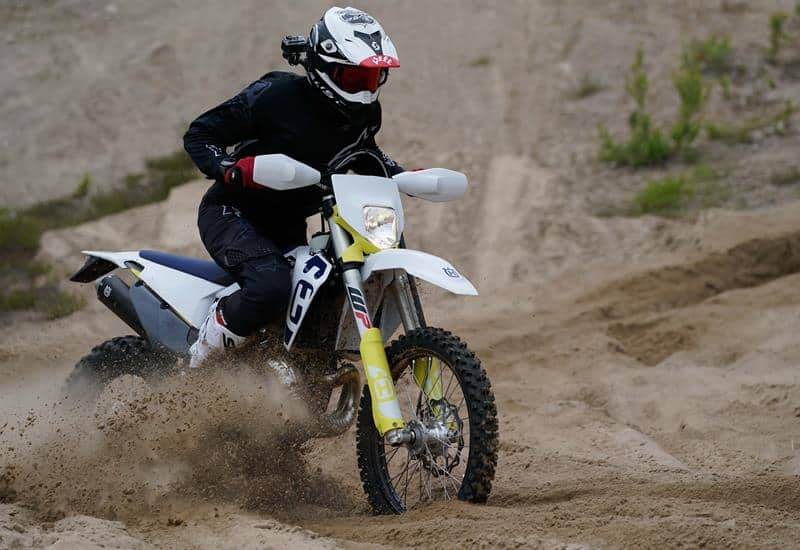 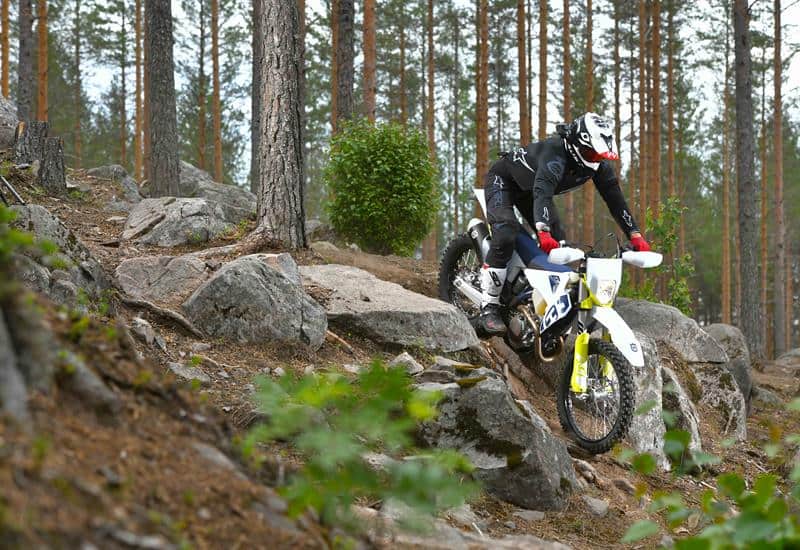 So rather than bore you with too much technical information – which you can read about in Husky’s tech sheet and press releases – I would like to focus on what they felt like to ride and in order to do that I have to describe the terrain we were riding first. It is important to give BIG consideration of where you ride before you select the model that is best suited to you.

This was very evident on the launch, which was held adjacent to a ski resort in northern Finland. The test loop consisted of a three-minute special test loop which was mostly whooped single track through the woods with loads of exposed tree stumps, tight switchbacks and loose rock. The enduro loop took about 15 minutes to complete a lap and was wildly varied but consistent in that if you were not climbing rocks – no wait, boulders is a better description – then you were negotiating sandy rollers or undulating single track forest tracks with tree stumps (again) peppered along each side of the trail.

The varied terrain on the test was excellent to assess the suitability each model for each section of the track.

I rode the bikes in the following order and so will comment on them in that order.

I really enjoyed this bike in every part of the track. The bike worked as well in the thick sand as it did in the rocky sections or single track. It offers tractable power, not too much when you didn’t need it and not too little when you did. A fantastic all-rounder for all skill levels. Unfairly this was the first bike I rode and the lower seat height was a negative that was hard to overcome and affected my overall assessment of the bike. I had to put this out of my mind and once I had adjusted to the more cramped cockpit I was able to enjoy the bike more.

Low down this bike shines, which is synonymous with 300s, but I found it lazy up top and battled to over rev this bike in the sandy rollers and open terrain. It shone in the rocks and single track and slow sandy sections. Of course, for the extreme sections it was my bike of choice on the day.

It seems to me that the 250s, both two- and four-strokes are the best all-rounders. This bike performed well over the entire course and was well mannered and predictable. It pulled well throughout the power curve and, post suspension adjustment, it felt balanced and planted, especially in the tight woods.

I’m left feeling confused! My personal bike is a 2017-2019 FE350 and while there are niggly issues with it which I have corrected over the past year and a half I love it. On the KTM launch the 350 EXC-F was my pick of the bunch and yet – apologies to all – but I just did not like the FE350 on the day. I’m not sure why, but perhaps I am just so used to my own personal bike. This year’s FE350 felt so different and not in a good way. I managed to get over the shorter feeling on every other model but not on the 350. As well, the power delivery to me seemed awkward and out of place everywhere. The gearing felt too short and then too long depending on the terrain I was in, and rather than being at home on the bike I felt awkward and out of place myself. When I had a choice on my last session to choose which bike I wanted to end the day on I chose the TE300i over the FE350. Mmmm! I need to ride this bike again somewhere else and over a longer period to give it a proper assessment, so I would say that the jury’s out on the FE350 – watch this space.

Wow, wow, wow! I really liked this bike and it was as a result my fun pick of the day. Mark my words, this bike’s low-end grunt will surprise you. It’s not the best choice for use in the thick sand or on sandy berms but everywhere else it is a bomb! Light, fast and powerful for its displacement. It will be interesting to see how it sells given that licensing in Europe for 16s and under is limited to 125cc, but as a schoolboy racer this bike is a beaut!

I chose this bike after a busy day’s riding and, I can’t lie, I was feeling a little fatigued at the time. The first part of the loop was single track and the engine inertia needed some adapting to, but as we broke out of the woods onto the back straight, which was made up of loamy deep sandy rollers, the FE501 came into its own. Preloading the suspension in combination with the power of the 500 made traversing the whoops the easiest task of any of the bikes and I was grateful for that at the time. Throttle finesse when used wisely in the rocks and sand was rewarded handsomely and where I had been less precise on other models I found the FE501 pretty friendly and kind as the power helped place the bike’s front wheel where I wanted with the least amount of effort. I did catch myself going ‘whoa’ in one of the roller sections when the front came up so fast that it surprised me for sure. I rate this bike for everything else besides tight single track and it’s an excellent tool for lazy riding/riders who can handle the power or for flat out fast stuff in open terrain. Not a choice for novices!

The pick for many of the pro’s and experts on the launch. I preferred this to the FE350 – sorry what? Yep, I can’t believe I just typed that either but go figure, the FE450’s power in this chassis was way better than the FE350 and I was far more at home on the FE450. As I said about the KTMs, I would as a younger man considered this a buy, but as a vet the FE250 would be my pick to purchase but it would still not stop me enjoying riding the FE450 given the chance.

I liked the TE300i better the second go around. It has all the low-end you could wish for, it’s light and manoeuvrable and fun to ride, but it lacked the usual top end revvy quality and felt inhibited up top. An extreme machine and it seems Husqvarna has engineered it to live up to this genre, so its motor characteristics and lowered seat height and suspension settings only reinforce that it has been designed for that purpose. 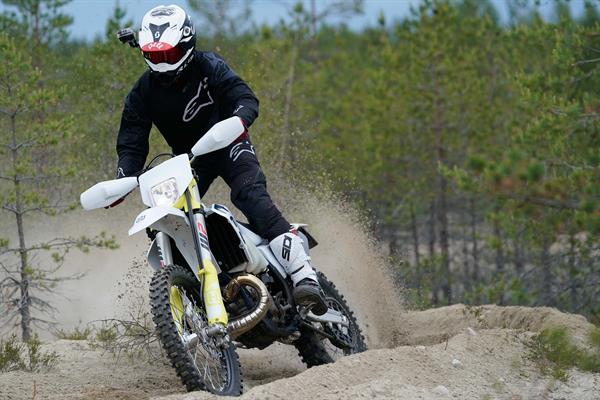 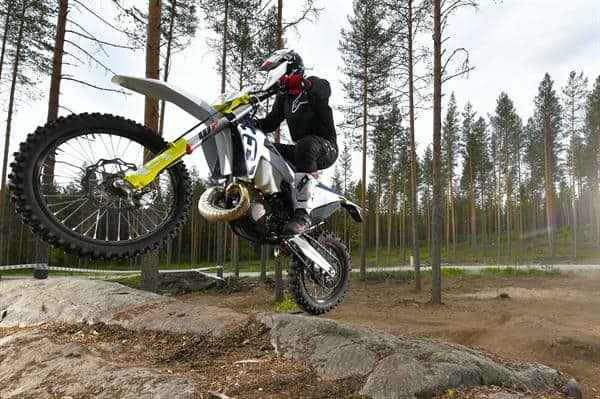 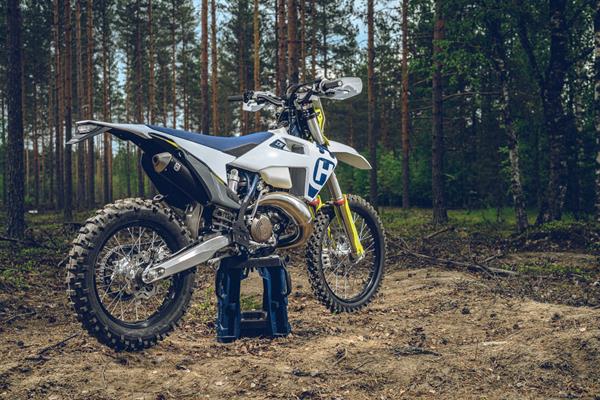 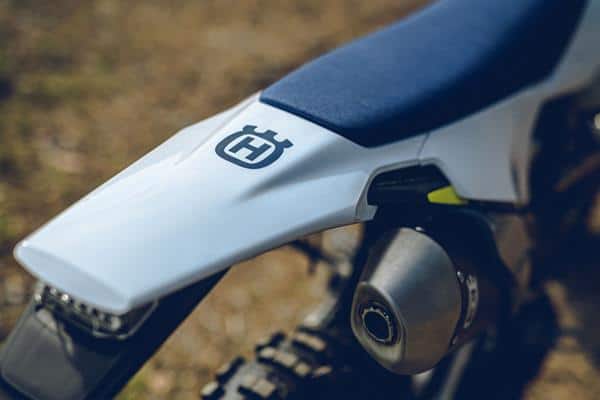 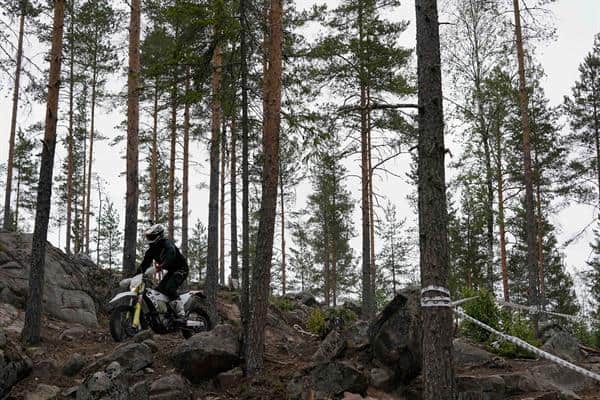 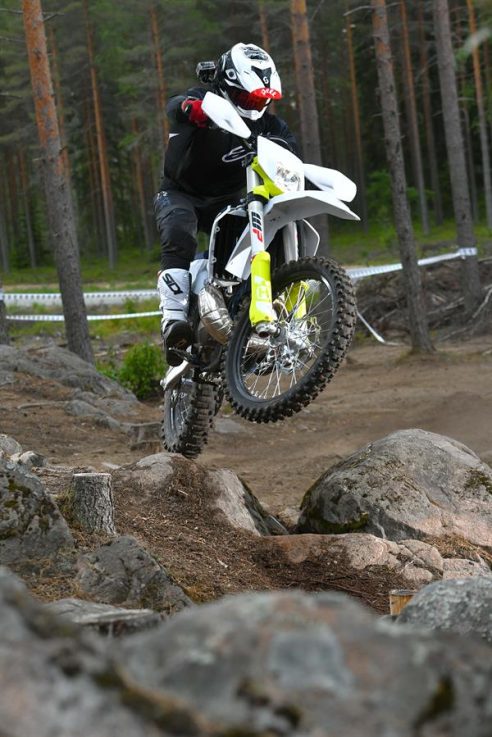 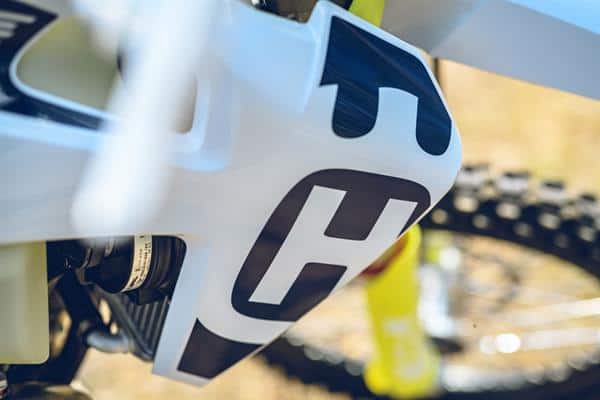 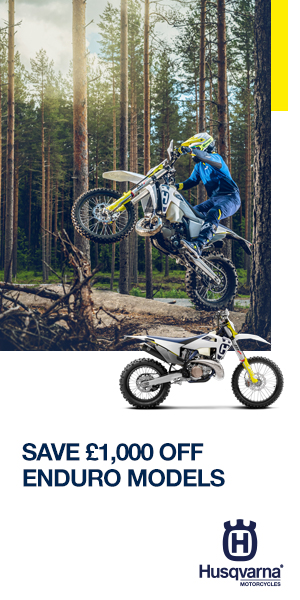 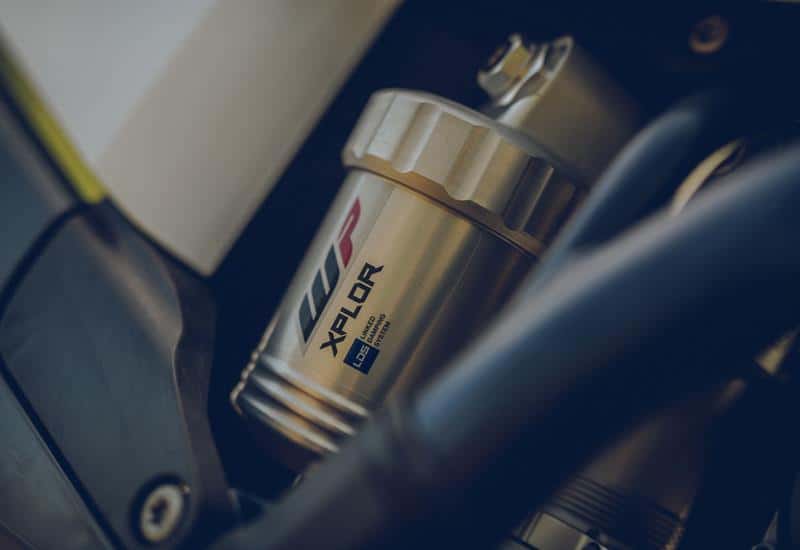 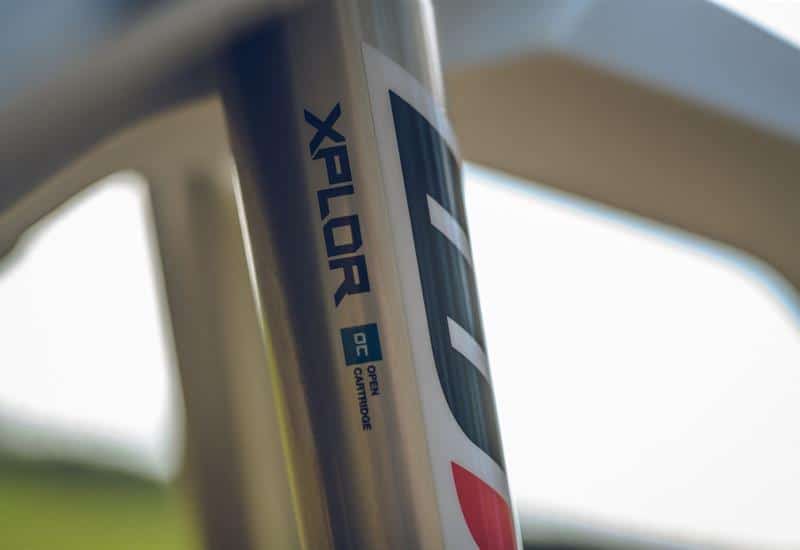 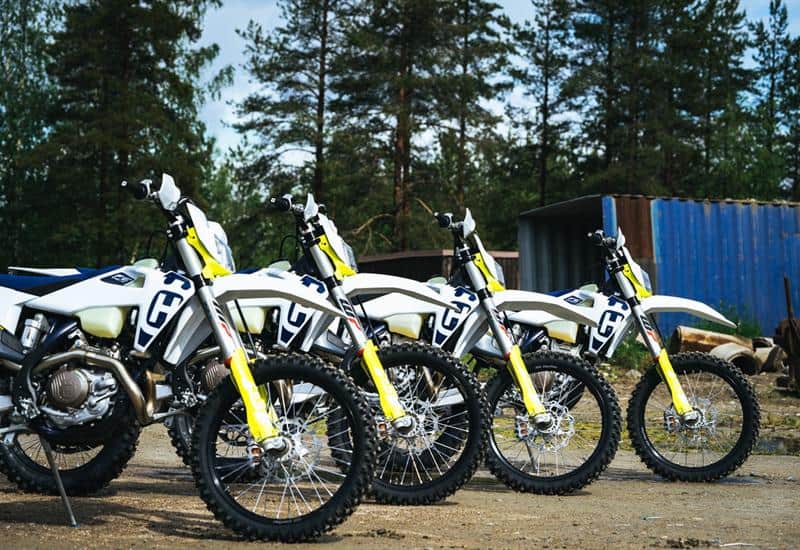 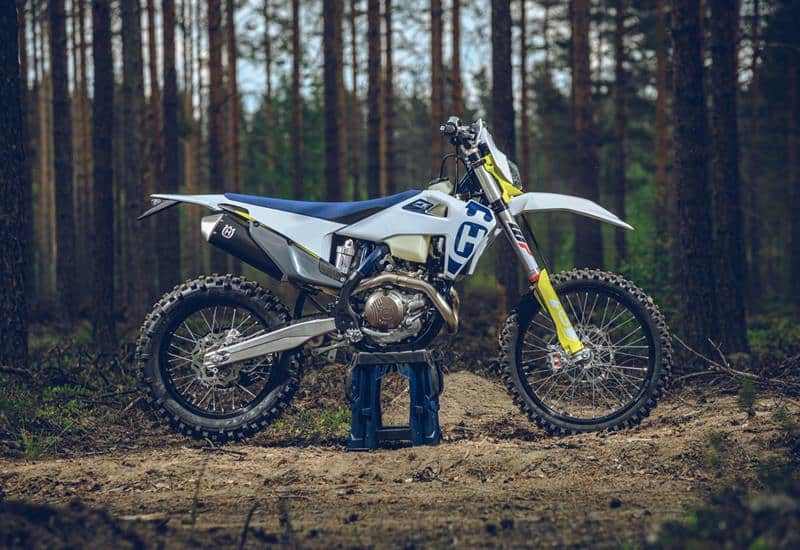 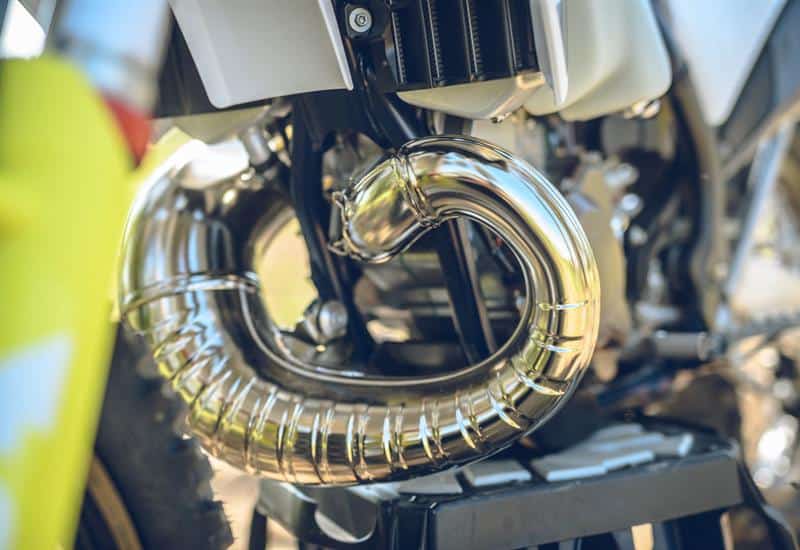 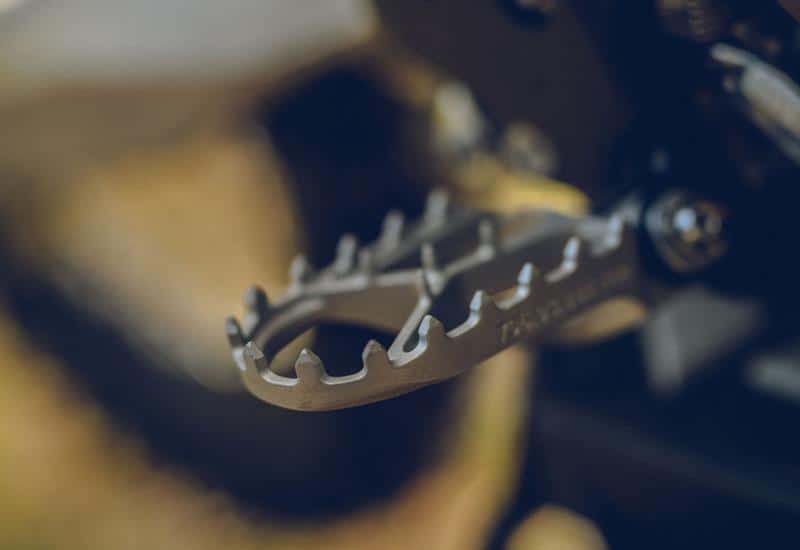 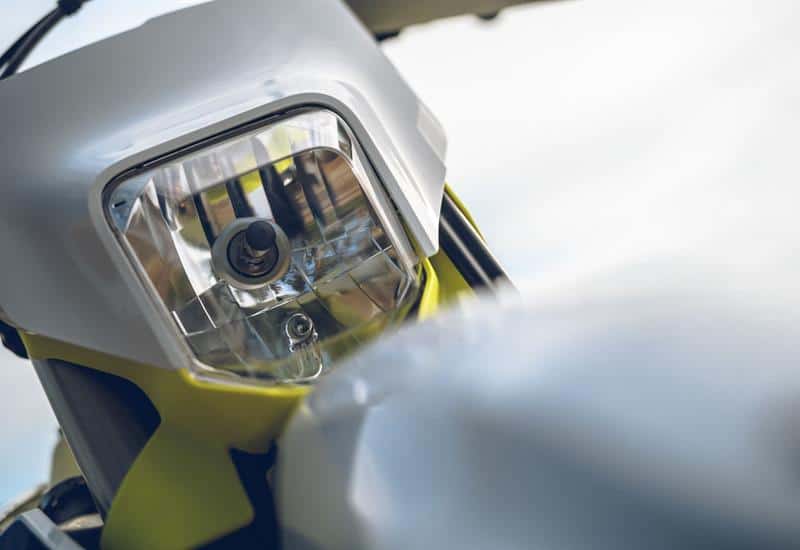 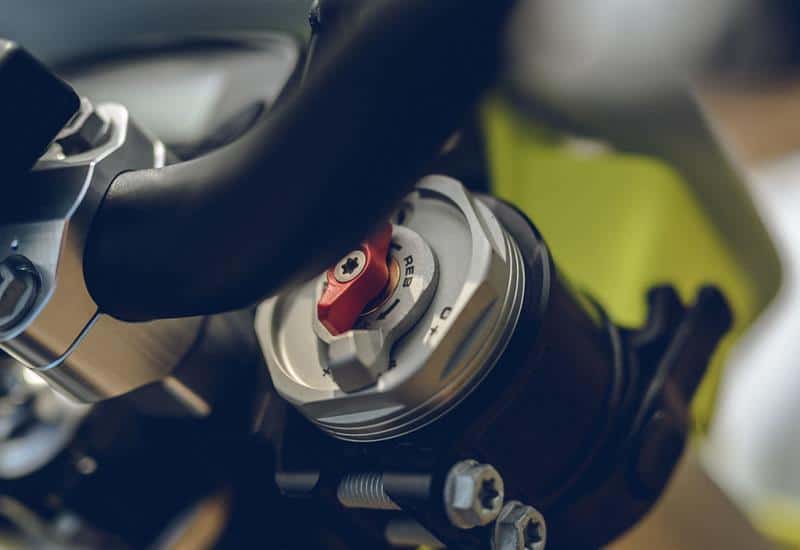 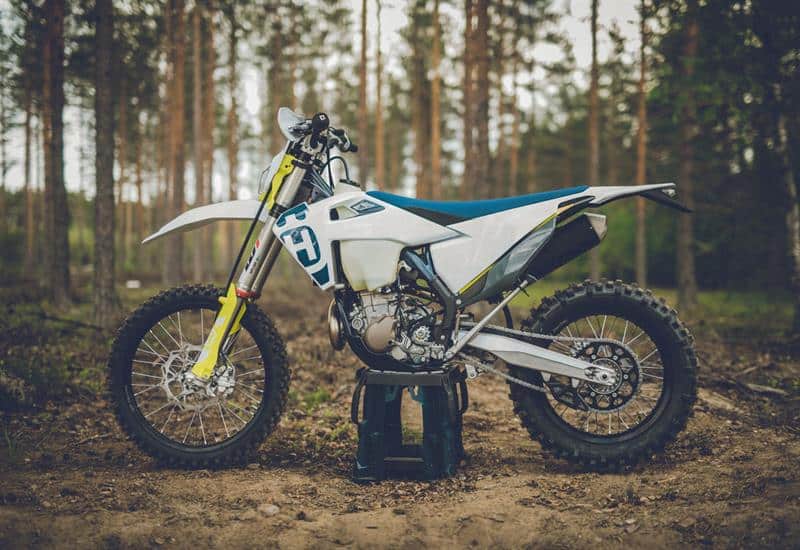 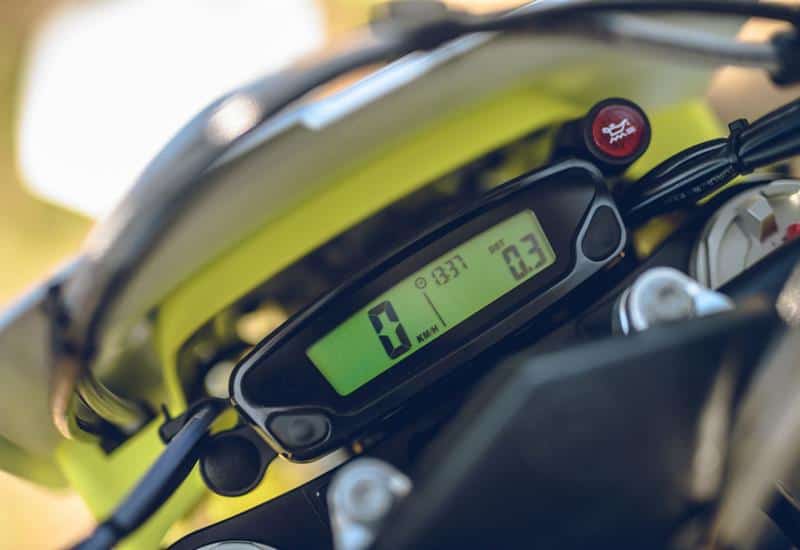 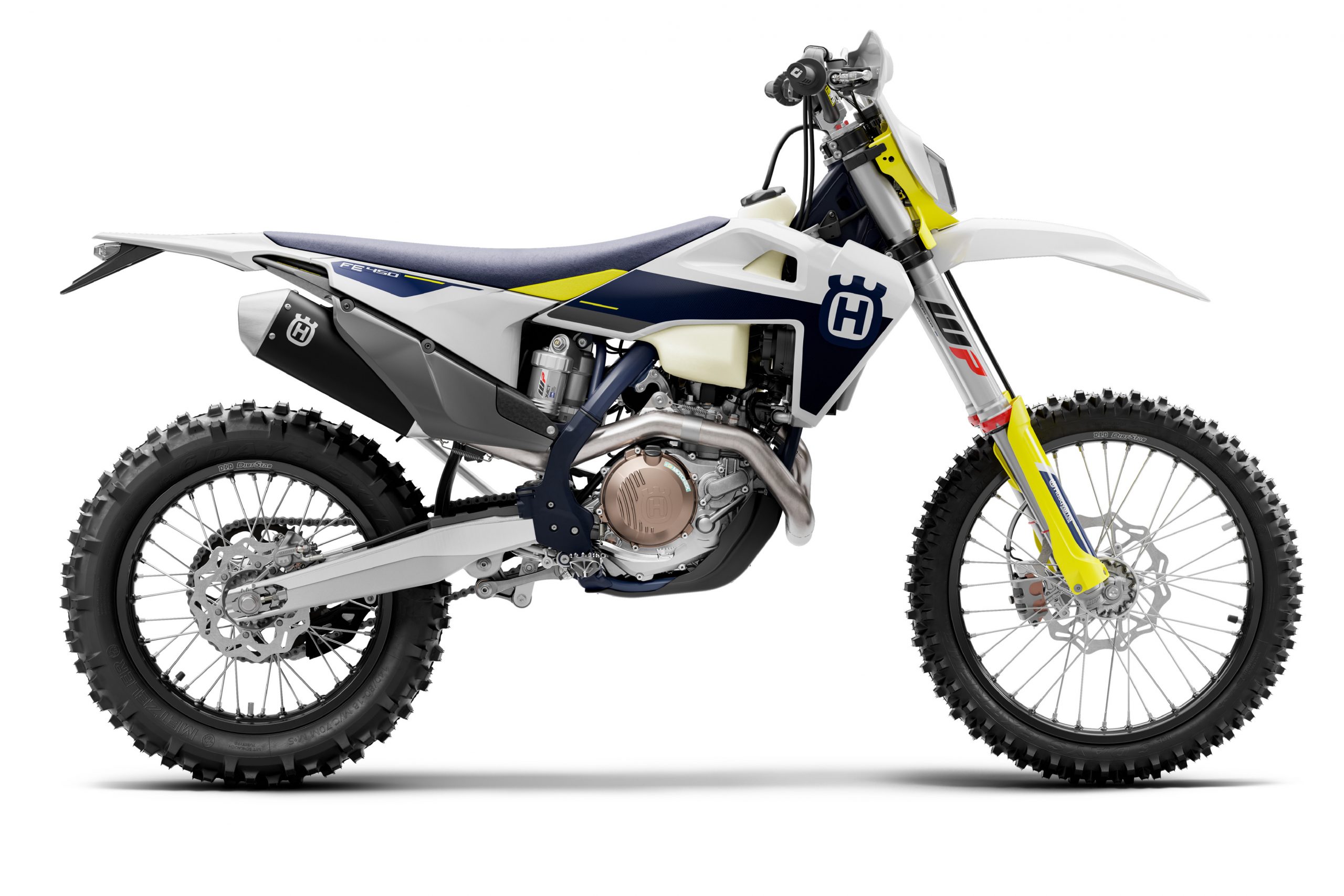