Bridgestone has for a long time relied on their ED663/668 – otherwise known as Gritty – tyres for enduro/trail purposes. A tyre so old and so out of common circulation – at least in RUST’s rarified environments – that we have no real estimation on how good they were. We understand the Grittys found some traction (oops!) with trail riders, but for no-compromise competition riders it’s been Michelin, Metzeler or GoldenTyre (the latter when they were good) that have been first choice for years now. 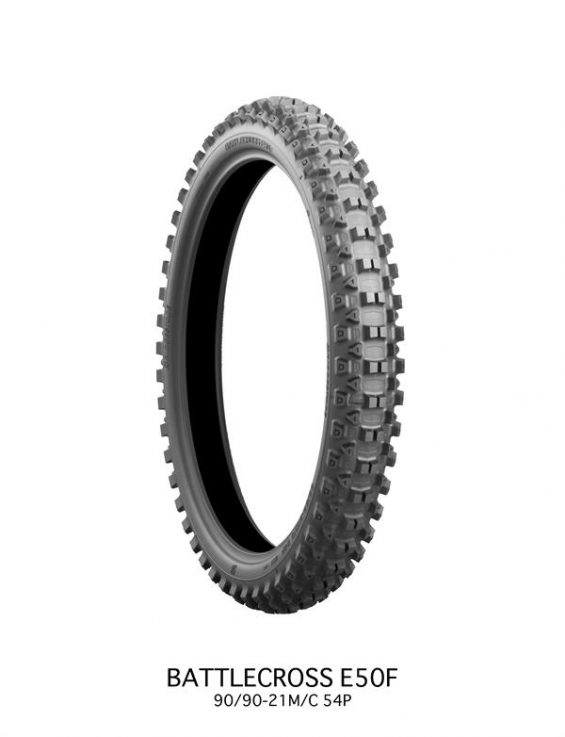 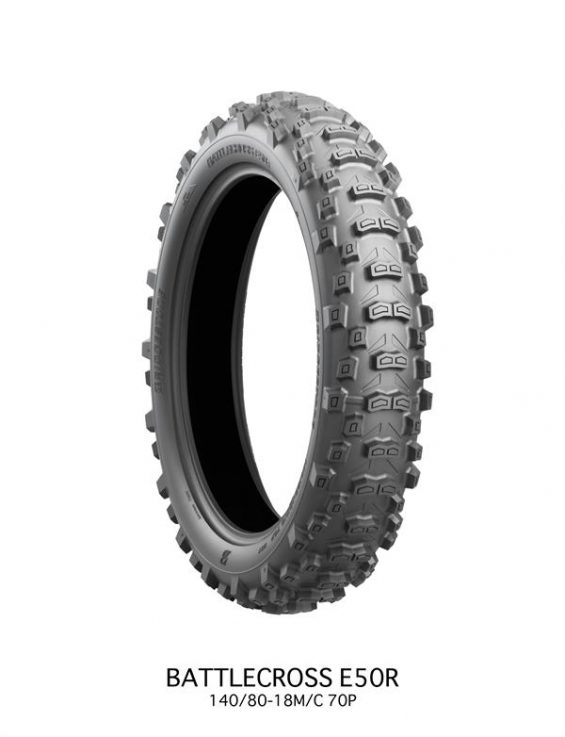 So in 2019 Bridgestone has come back to the enduro market with a new offering. The new tyre levers off the tech of the Battlecross X10, X20, X30 and X40 tyres that have preceded it – tyres (let it be said) that have proven themselves equal to the best in British motocross, and are to be found on 2018 British Masters champ Elliot Banks-Browne’s Geartec Husqvarna. Known as the Battlecross E50 this new tyre is both road homologated and enduro competition compliant. But whereas their rivals typically have more than one compound and block type to offer, from Bridgestone this is a one-tyre-fits-all offering. There’s just the one front, a 90/90-21 and a choice of two sizes for rears, a 120/90-18 or 140/80-18. So it’s fairly universal tyre both in operating range and intended market – from beginner to champ.

With goals of beating their old tyre on cornering grip, traction and ease of fitting, the Bridgestone team has stepped up to the plate with all-new designs and compounds. The most notable feature is their ‘castle block’ design on the knobblies (lets call them ‘blocks’). Castle block kind of sets a block within a block, with the inner block protruding slightly above the height of the outer, which gives a second edge to each block. Apparently, even as the blocks wear, the inner block remains protruding.

Now if this sounds familiar, it is. Dunlop’s Geomax MX52 has similar tech that they call PCBT – progressive cornering block technology – applied to the side blocks on the rear MX52. And there’s the difference – Dunlop applied the tech to improve the progressivity of the cornering performance of their tyre, while Bridgestone are applying the tech for better straight line traction as well as for cornering grip.

As well Bridgestone has created ‘bunkers’, like areas of negative relief to their tyres, which as modest as they appear apparently improve grip when the tyre is fully buried in the terrain.

Finally Bridgestone has created a softer tyre wall (Gritty’s were apparently notoriously stiff) by way of adopting a dual compound, together with a different profile to the bead. This improves impact absorption – and so a more comfortable ride – while also making tyres easier to fit (no workshop hydraulics required!).

Bridgestone had some stats to support their tyre’s performance. Apparently the E50 has an increased Lateral Edge Component index that is 60% greater than the Gritty, while its Longitudinal Edge Component index is improved by 120%. We only wish those numbers meant something to us – should have paid more attention in science classes! But in short – and we’ll take Bridgestone’s word on this – this has decreased the lateral stiffness of the front tyre for better cornering feel, while the rear tyre blocks are stiffer for increased traction. 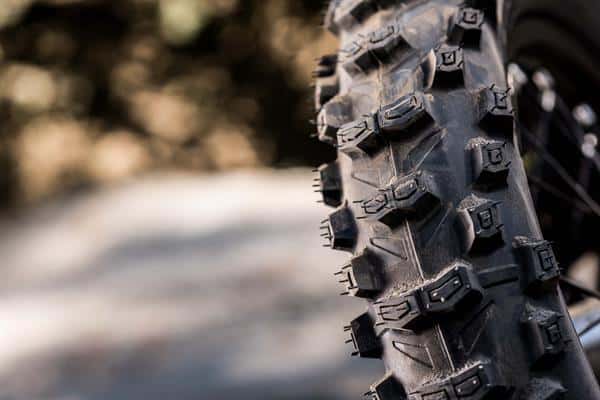 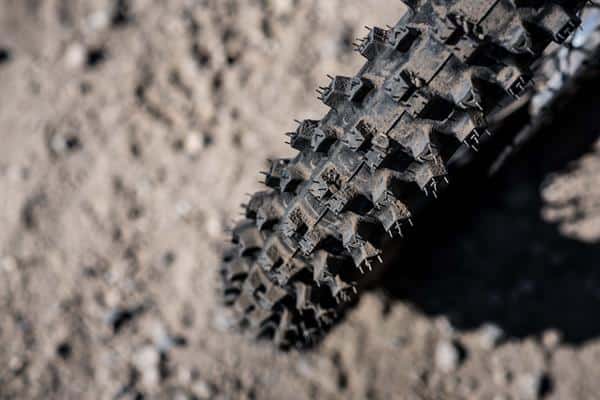 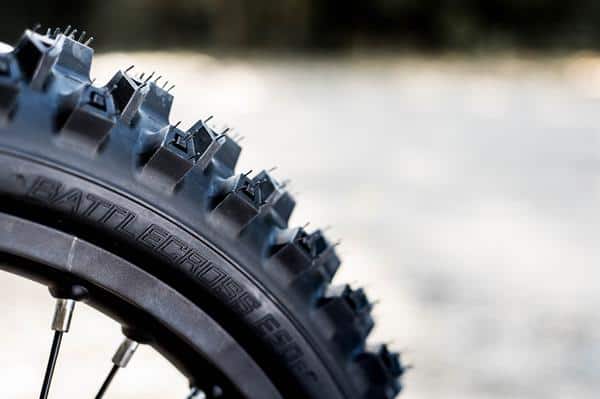 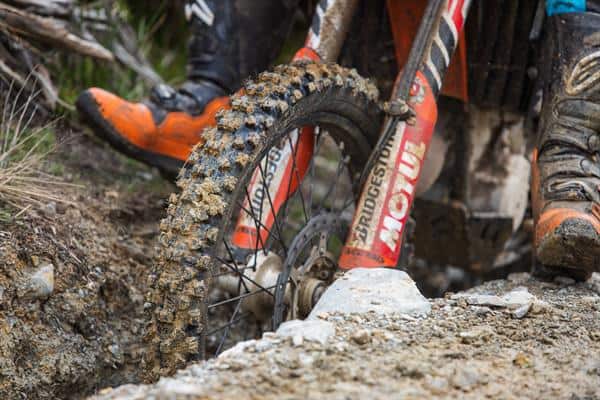 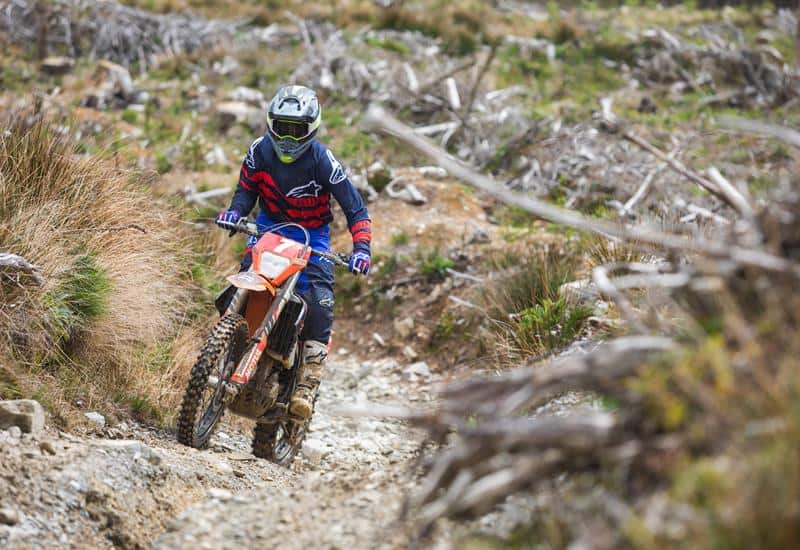 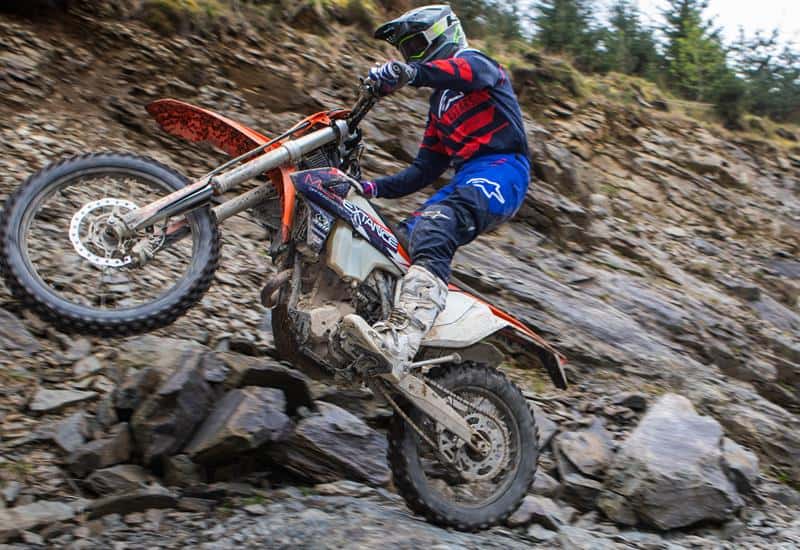 Our test was surprisingly structured (having been organized by Bridgestone together with the Mick Extance Off Road Motorcycle Experience Centre (take a breath!). Mick’s domain is a fair 1500 acres of forestry land in deepest West Wales with proper hills and a great range of terrains from loam to rock and (did we mention?) with some great hills, the kind where you really concentrate.

And we have to say the E50s were a big improvement on the older Gritty tyres we had for comparison (riding each section multiple times with each tyre). The new front makes big gains with so much more side grip that meant you’d more confidently lean the bike over when cornering. It was so night-and-day better that it transformed the feel of the bike (KTM 250EXC-F) and you could push much harder, which would save seconds in a special test, while even a trail rider would appreciate the confidence gain.

Where the grip from the rear felt most improved was over wet rock where the old Gritty was inclined to spin. But while the block was stiffer for traction, the softer sidewalls also meant the tyre moulded itself to the rocks better – like a soft trials tyre, which again meant more confidence and more scope to ride steeper sections more confidently as well as leaving you with grip to spare where life with the Gritty had become decidedly sketchy.

As well the E50 retains the decent longevity that many riders found with the Gritty. Mick Extance put his hand on heart and showed us what he said was a 17 hour old set of tyres – and we’d have to say that yes, we believe Mick (he’s unflinchingly honest) and the tyres looked remarkably fresh, especially given the amount of rock Mick typically rides on his patch. 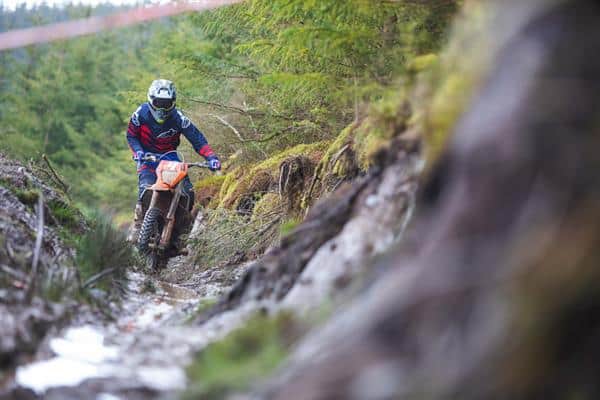 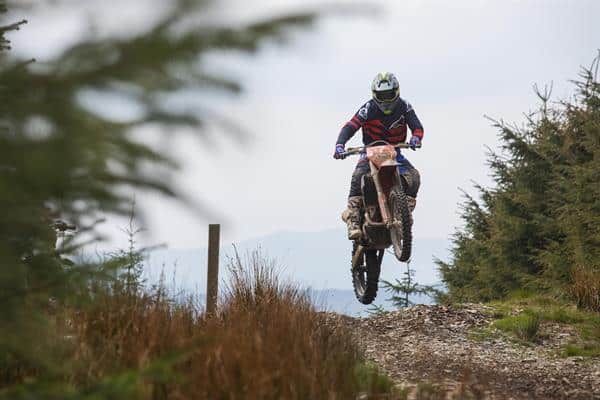 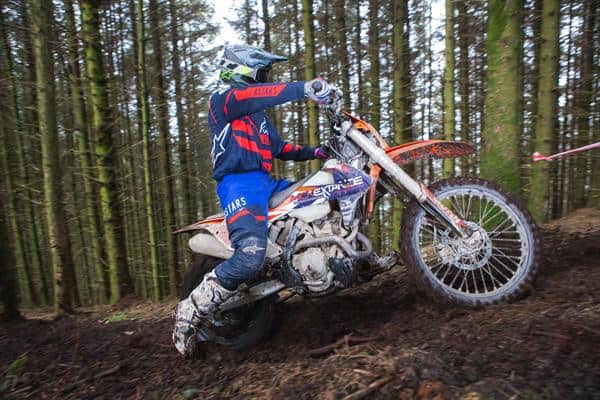 We were impressed. It’s always difficult to test a tyre in isolation and on new terrain (to you) – who’s to say how the opposition would work out? But at least we had the superseded tyre to go by (wouldn’t that be cool at enduro launches, having a 2019 and 2020 EXC to ride back-to-back?) and by comparison the new E50 is a substantial leap forward. Fact was we were riding the EXC-Fs around as we would on any competitors’ tyres, the E50s feel ready to race as much as ready to tour.

With retail prices looking to match the usual suspects, Bridgestone isn’t waging a price war here, so evidently in their minds this a tyre to take on enduro’s best. To see if they’re right we’ll be getting a couple of pairs to try on our long termers to compare next to our regular Metzeler/Michelin fitments – we’ll report back in due course on how they work out. But in the meantime, yeah nice work Bridgestone, good to have you back! 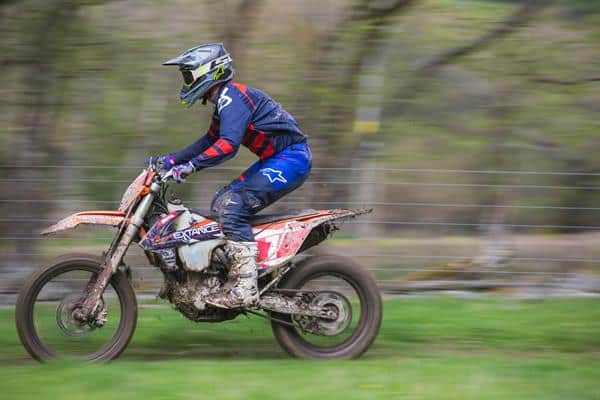 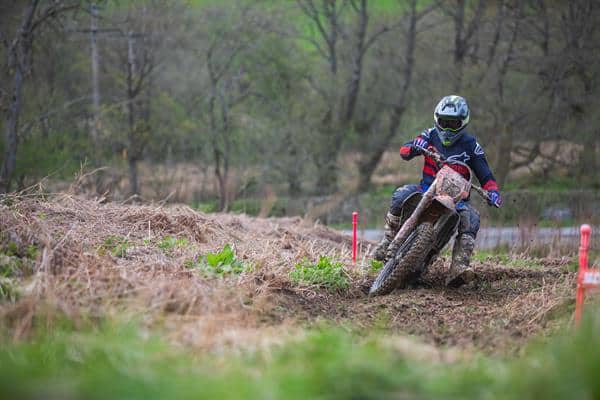 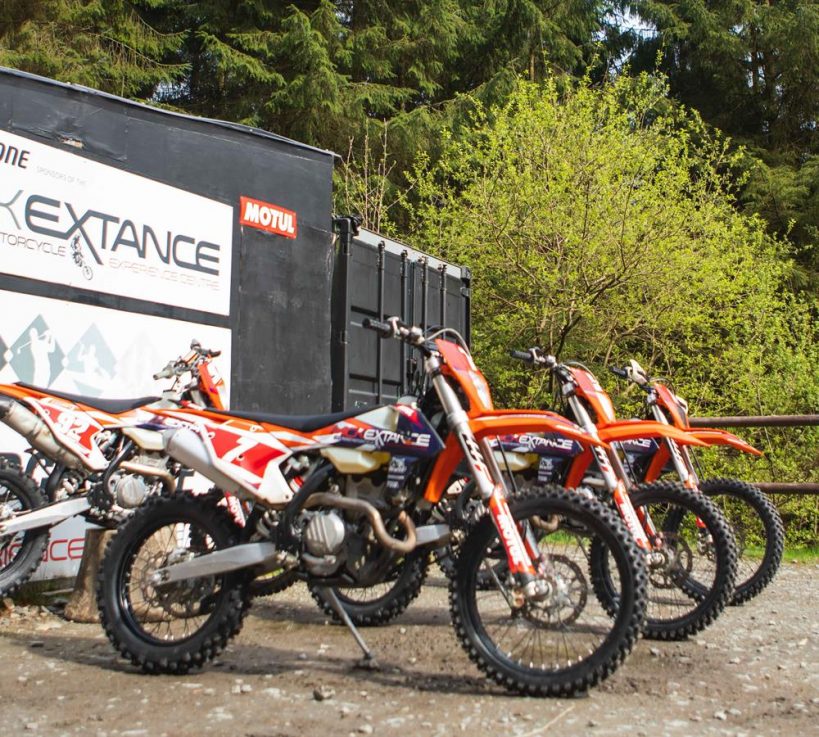 Fancy a ride at the Mick Extance Off Road Motorcycle Experience Centre? We recommend it, such an excellent venue and Mick and his boys will give you a great day’s riding on the KTM 250EXC-Fs.

Go to http://www.mickextanceexperience.com/ for full details.