There’s nothing like putting on 2000 miles in five days to check out the worth of a saddle upgrade. With rain, sub-zero temperatures and a mix of on- and off-road we’d get a fair appreciation of its capabilities.

Now I do have a regular upgrade I apply to many saddles when I’m anticipating a long ride. It’s a trusty old sheepskin, bought for £30 at the Overland Event a few years back. It’s a black sheep so it doesn’t show the dirt so much. And it works – up to a point. I have to refluff it during stops to maintain its effectiveness, it can get toasty on warmer days and generally I have to stop using it when it rains. And aesthetically, while I like it, I do get a few looks and the odd derogatory comment, so it’s definitely a limited success.

Now this Cool Covers seat upgrade, at about £75, is an altogether far more advanced solution to seat comfort. It’s essentially a mesh, some 8mm deep, I’m guessing made from some kind of nylon or polymer that stretches over the existing saddle and is secured underneath by hook and loop straps. The general concept is that as it doesn’t fully compress under your weight it maintains a sense of cushion and airflow under your butt, the latter helped by a claimed 98% air permeability. And being permeable, unlike my sheepskin, it lets rain as well as air through, which means you’re not sitting in a puddle of water on those super-wet days (something which can make a big difference to experiencing wet butt or not).

It’s a smart looking cover – unlike the sheepskin – that follows the contours of the seat (on our long term Suzuki V-Strom XT) well, while the straps certainly hold it firmly in place. A couple of cold mornings confirmed it really does allow airflow as I could distinctly feel the cold wind under my butt cheeks. Wearing textiles that was fine, wearing jeans on a cooler day maybe you’d want another layer! But for hotter days that airflow is a winner. And as far as butt-fatigue goes, yes it definitely extends the riding day quite comfortably and made my 500 mile days remarkably easy with no after-ride soreness. In all it’s surprisingly effective and it was no surprise to find so many machines at the Kielder 500 also sporting Cool Covers.

The cover also maintains its look well over time, looking smart while maintaining performance. I’ve seen some super-expensive seat upgrades, using gel inserts and complete replacements, claiming all manner of applied physics, with eye-watering prices to match, but the Cool Cover looks to deliver all the same benefits at far more attractive, attainable, price point. In all, yes, very impressed.

By the way – in the image, that’s frost on the cover – but it shows the mesh perfectly!

Check out the Cool Covers range (and custom-made options) at https://www.coolcovers.co.uk/ 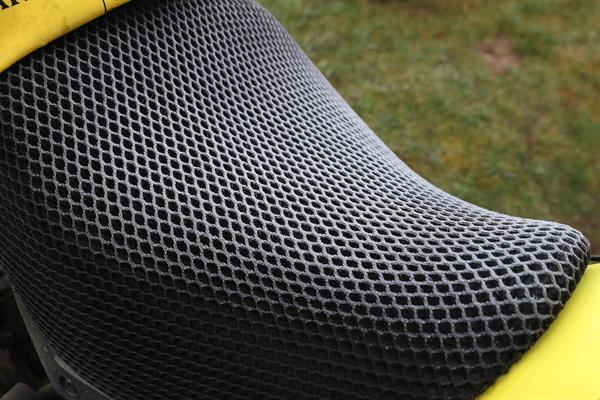 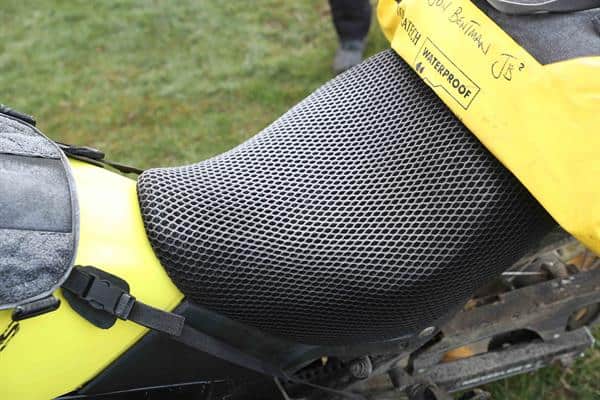