Craig Keyworth is riding the 2020 Dakar Rally (for the first time). RUST is following his journey. As part of his preparation he’s been riding various testing motorcycle events, not just rallies. Probably the most extreme and difficult of all has been the Scottish Six Days Trial, as his recant explains… words & pics: Craig Keyworth
PrevPrevious
NextNext
PrevPrevious
NextNext

IN MY LAST article (see RUST #42) you’ll recall that I was – rightfully – playing down my trials riding abilities. My mentor and pro rider Wayne Braybrook (top man, finished 3rd at the SSDT in 1998, winner of the Hells Gate extreme enduro in 2007 – these among many other top international results) assured me I’d get around the SSDT, probably for no better reason than as I was doing it on a spanking new Montesa 4RT! Well, how did it go? Exactly as I’d predicted. I wasn’t last, but I was very, very close to. That said, I finished. And in a somewhat perverse way, I loved it. It hurt though. A lot.

My approach to the SSDT has to come wildly un-recommended. There is an old trials wives tale that goes something like ‘in order to have a hope of getting a SSDT finish, you’ve to do many, many hours of trials competition in preparation’, there’s also a recommendation of riding the tougher Yorkshire events, some of the two days and maybe the Scot as your last test. A three-year plan is spoken of.

Not me. I didn’t have time. My plan was in any case to take me out of my comfort zone and push myself. Mission accomplished. My comfort zone was in the bottom drawer of my toolbox in Lincolnshire and a long way from the rocks, streambeds and rivers of the Scottish Highlands. I should mention I was carrying a bit of an injury in that I’d popped and made a mess of my shoulder at the Merzouga Rally just the week before the SSDT. Nothing too bad, but enough to make me sick a couple of times during the week. Didn’t waste it though, I needed the calories…

To say it was a tough week would be something of an understatement. The trials scene is a friendly one, but I was under no illusions from friends and acquaintances that a ride at the SSDT was not to be wasted – to turn up and take a week of ‘gentleman’s fives’ (where you simply ask the observer to record a maximum – fail – score, without riding the section) was to be frowned upon, and rightly so. Actually, more than that: if you request a five, you’re on a list. And not a good one. Again, rightly so. Those who rode around me and my flying Montesa will attest that I gave everything a proper go. I think with a more selective and measured approach I’d have got a good amount more 1’s, 2’s and 3’s. Not here. Death or glory! Neither came good in the end. I got one clean. One. This also came with a hug from a fellow rider (a grown Yorkshireman no less) and a massive cheer from the assembled crowd. It was clear to all I was having a tough time, but I was there for a finish.

I spent my days watching guys and girls at the very top of their game, some incredible riders who’ve honed their craft over the years and have a level of precision that I could maybe match on a pushbike, enduro or rally bike, but not on a trials bike. I was left wanting. Usually only wanting 1 or 2 inches, but those are important inches. If there was a prize for the most almost cleans, save for a little, yet catastrophic shortfall, I’d have it I’m sure. Likewise, if there was any points to be had (or detracted) for being pretty quick on the open going – which let me tell you is as hard as any club trial I’ve ever done on its own – on the way into and out of the sections! The wail of a Montessa on the limiter became familiar to those around my number. Bless that little bike – had it not been for its top speed I’d still be in Scotland now. I used every bit of it (and left some behind) getting in every day before my cut off time.

I also made some stupid mistakes with my admin, like coming in before my allotted time. For a while I had more points than it was possible to attain by fiving all of the days sections. Genius. I also elected to ride alone, mostly as none of my mates ride trials, or a stupid enough to learn at the Scottish.

THE JOY OF A FINISH

And therein lies the beauty of motorcycle competition. I can push most bikes, and tend to be in quickish groups at most events. I’ve had a decent level of podiums over the years but I’ll be honest – I’d forgotten the genuine joy of a finish. To get round a tough event, to face and defeat the struggle, and to have to dig deep to just ‘survive’ is something too easily forgotten when you’re being grumpy in a desert because things aren’t going your own way. There were enough riders at the Scottish who were hand on heart complimentary about me getting a finish. Plenty of ‘well done’s and a few comments from learned and experienced riders that knew they’d not seen me at any other trials events, no real prep and there to tough it out. These were easily as sincere than any congratulations on podiums or consolatory nods when you’ve been pipped to it; and I wasn’t expecting that. If you’ve been there, you’ll know. If you haven’t, I assure you, it’s a seriously tough week! 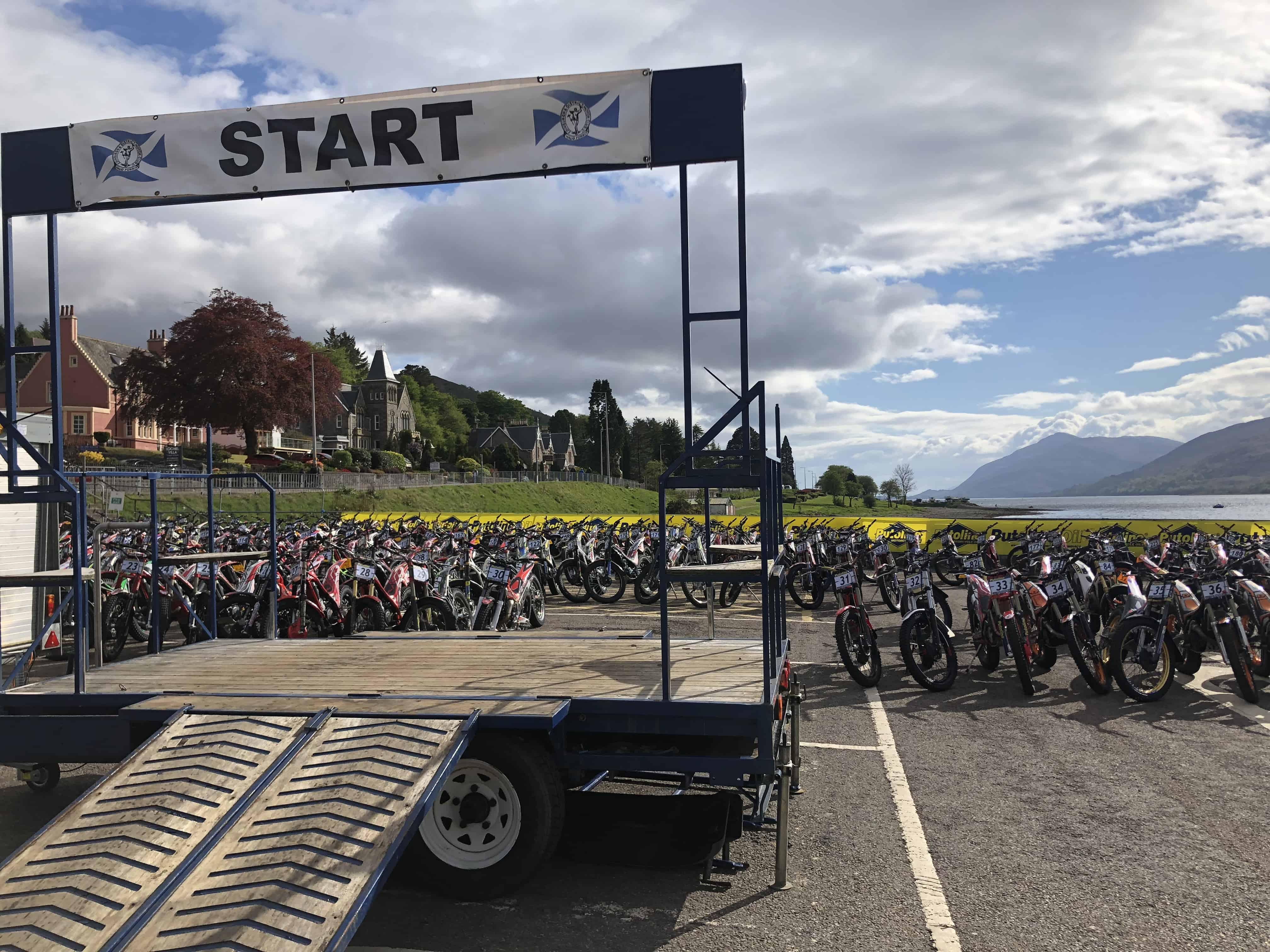 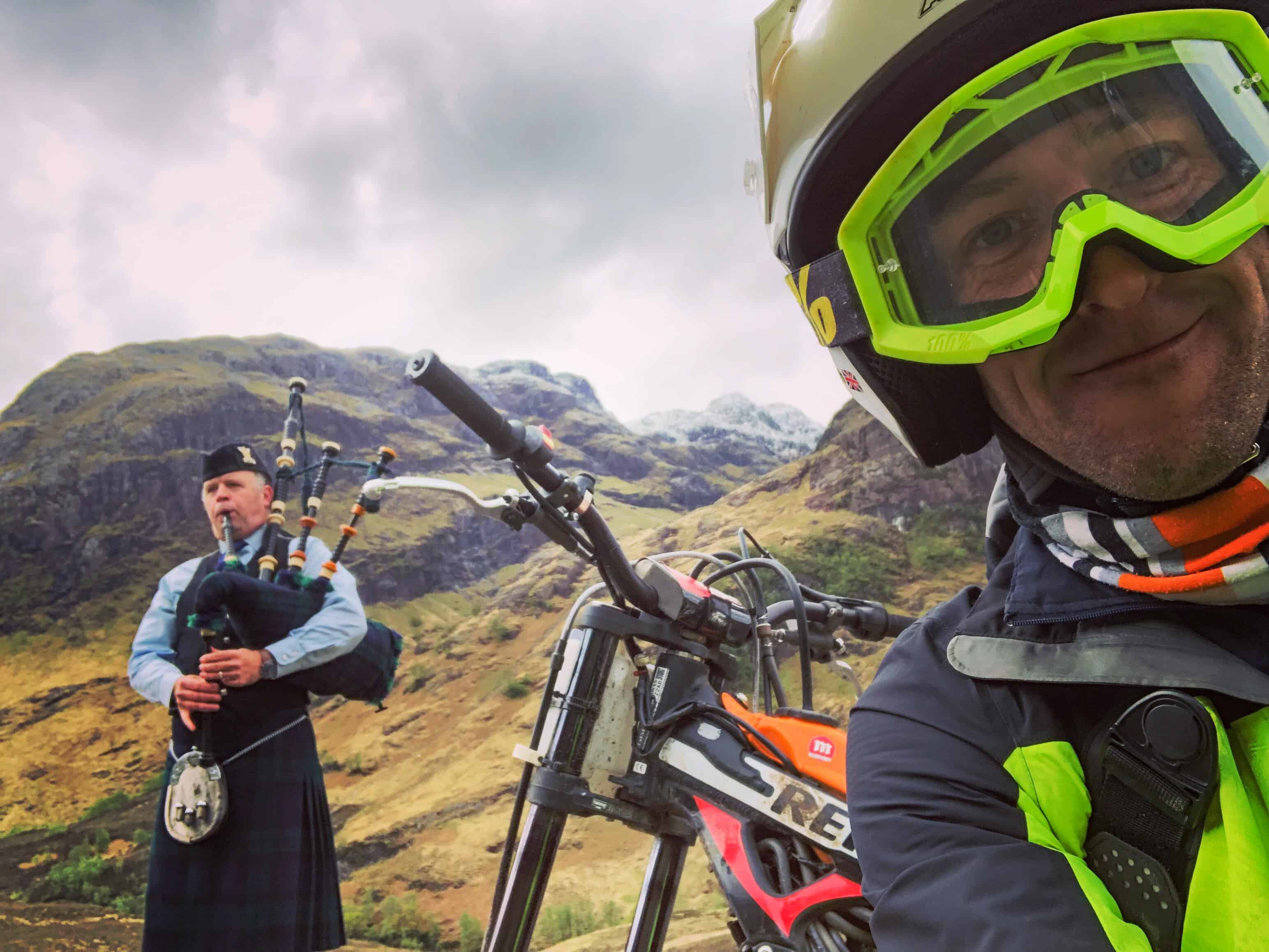 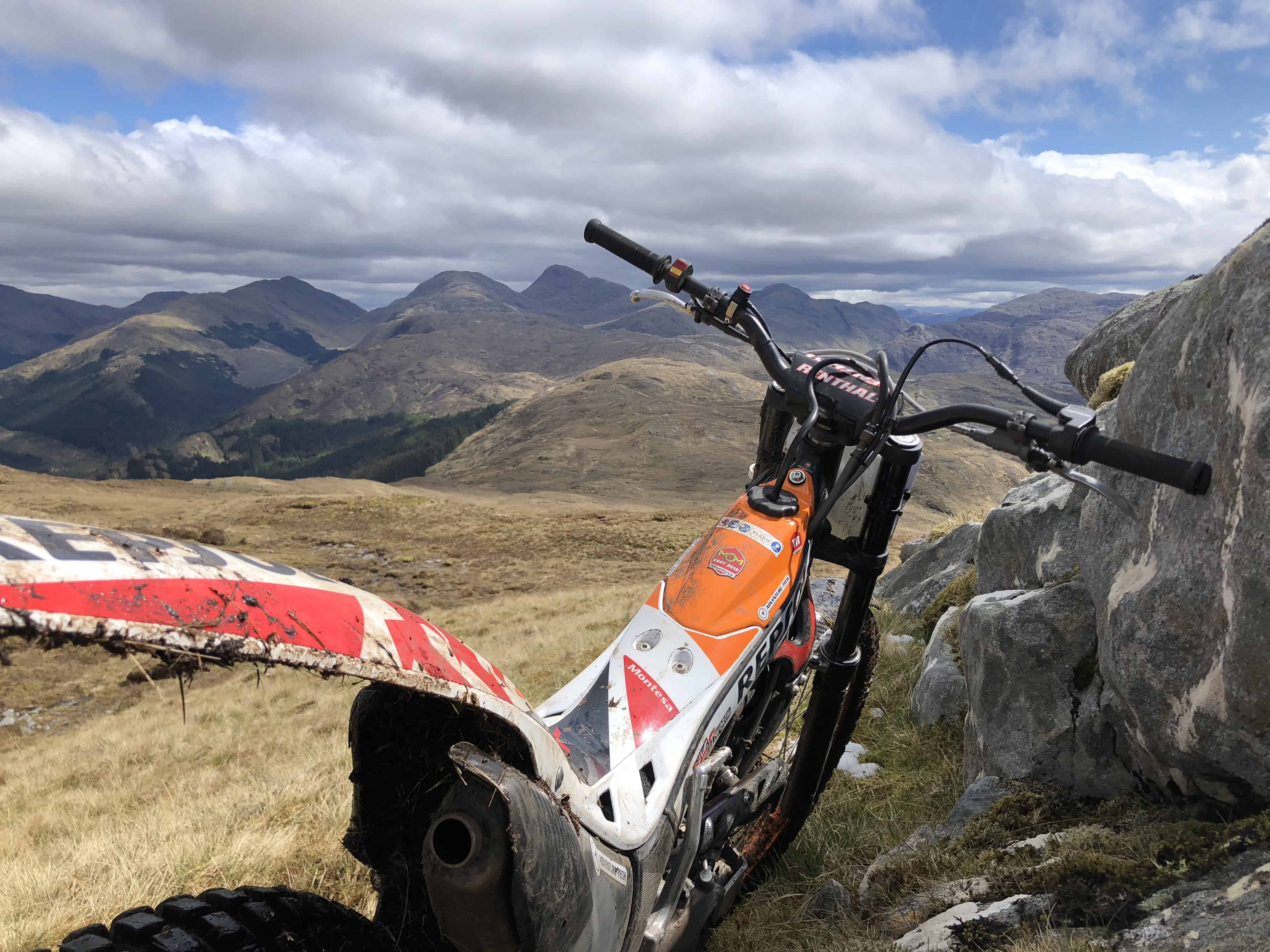 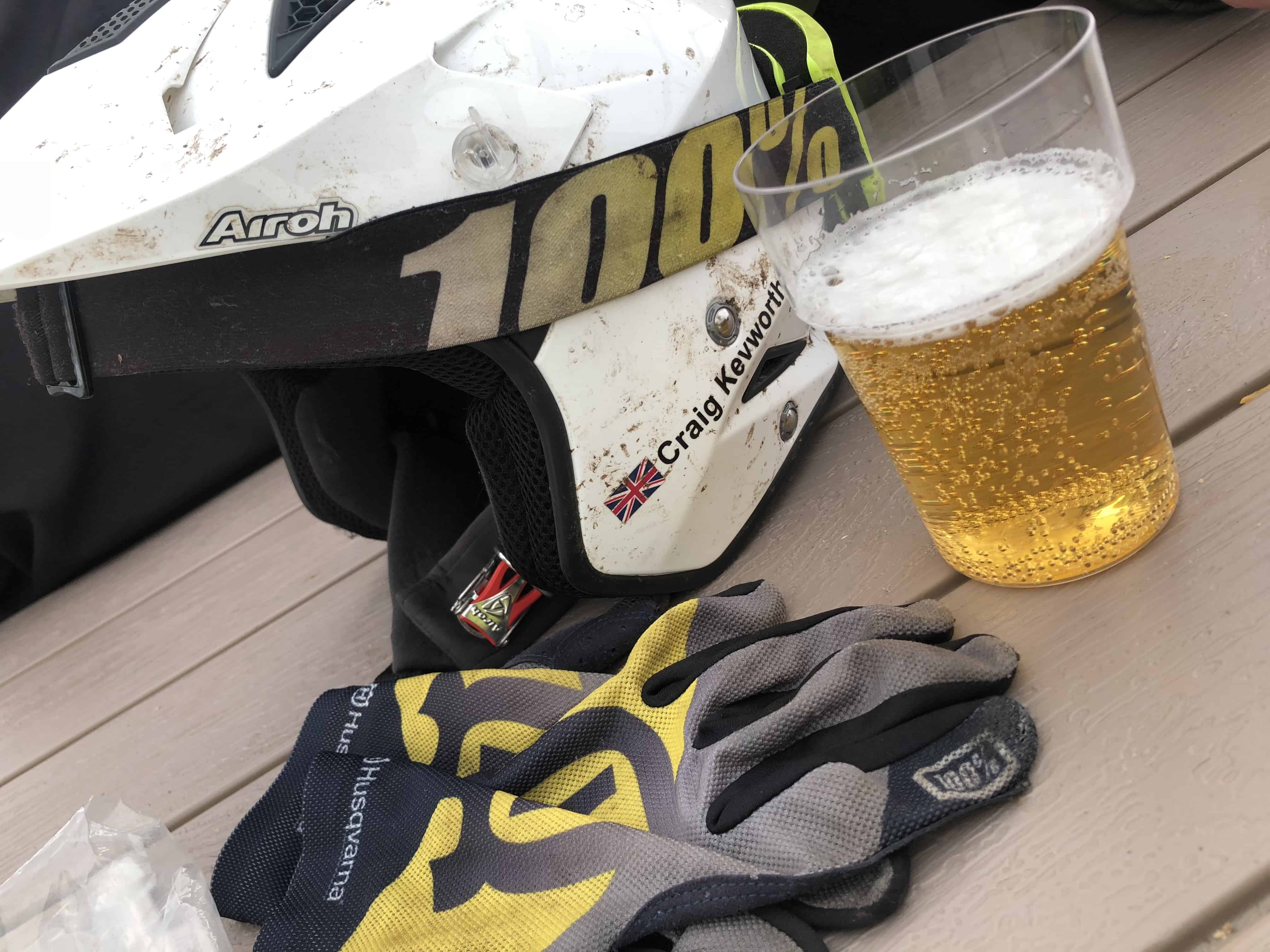 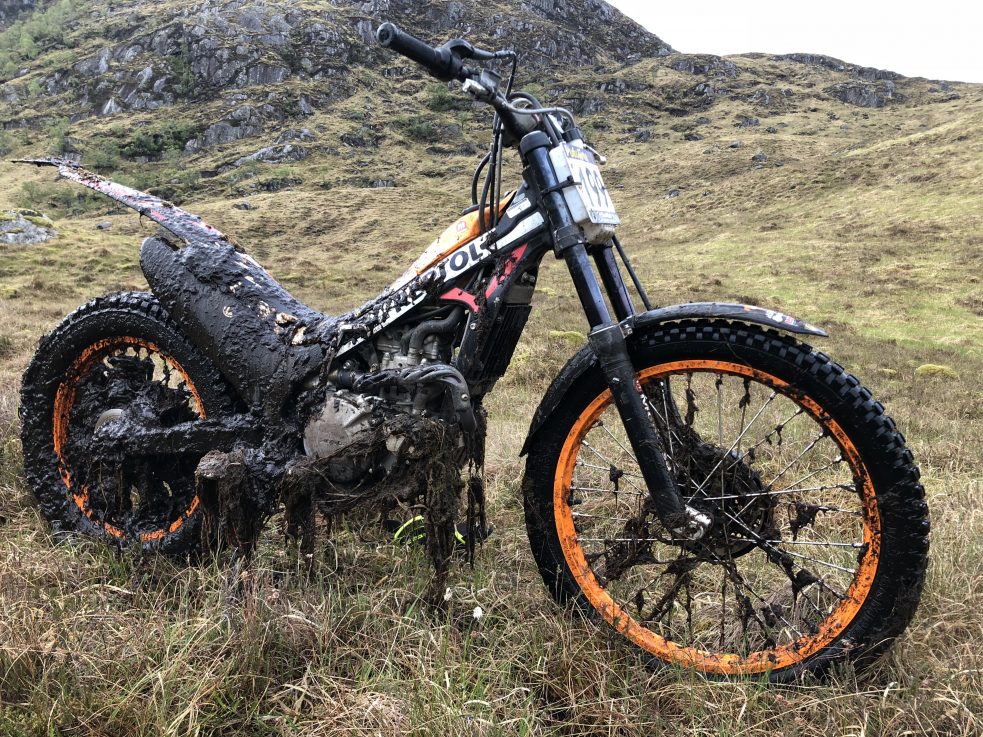 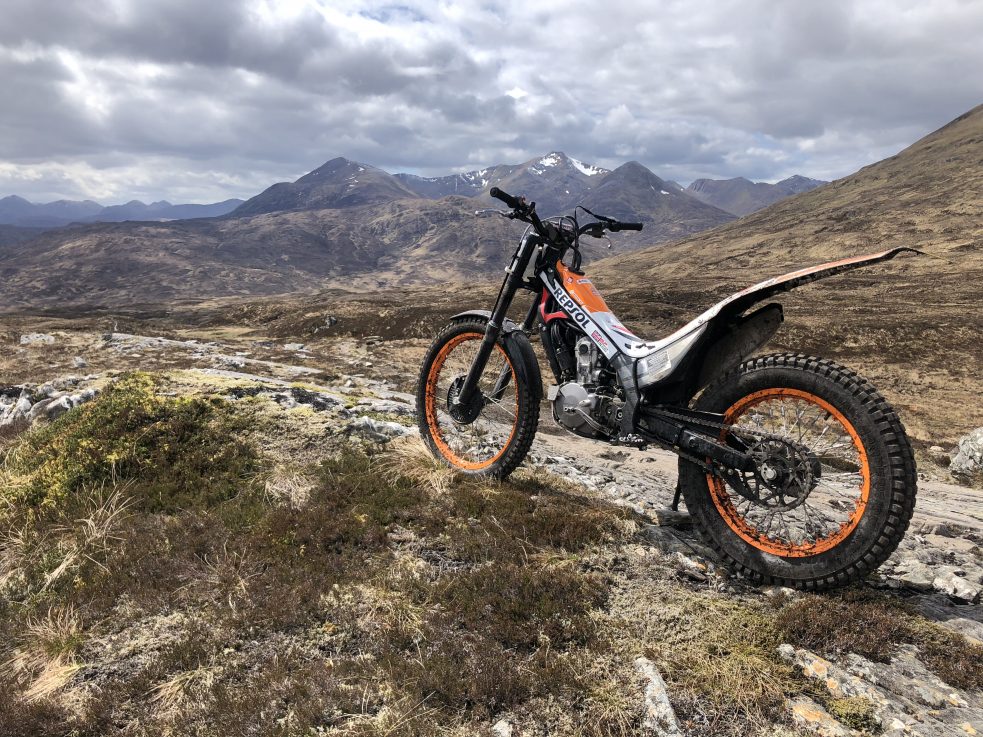 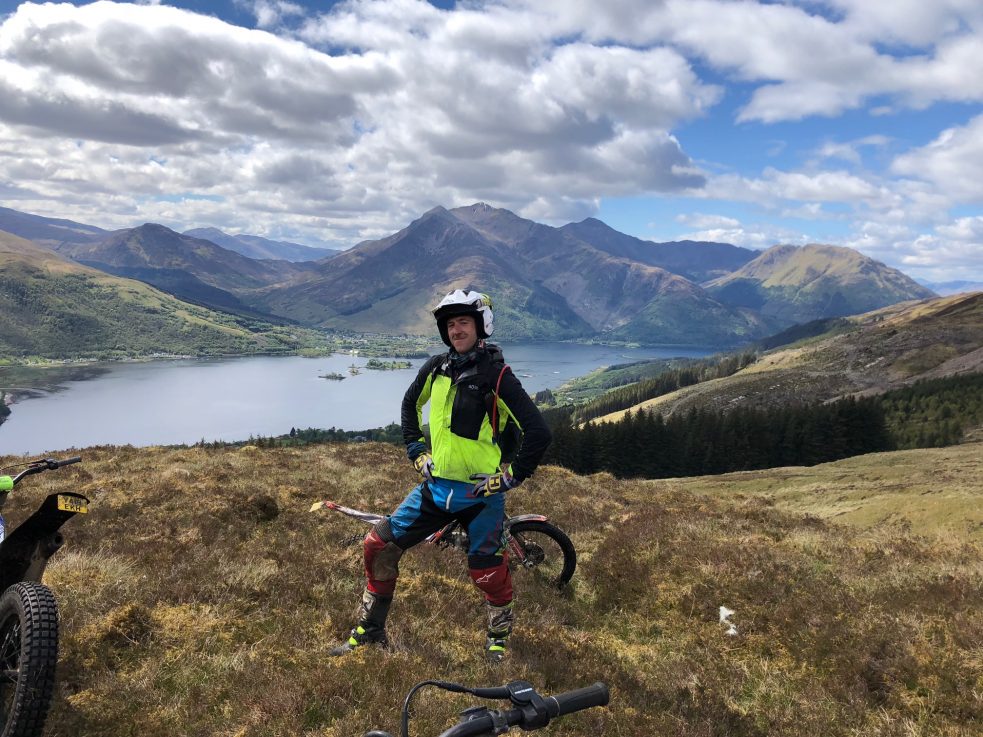