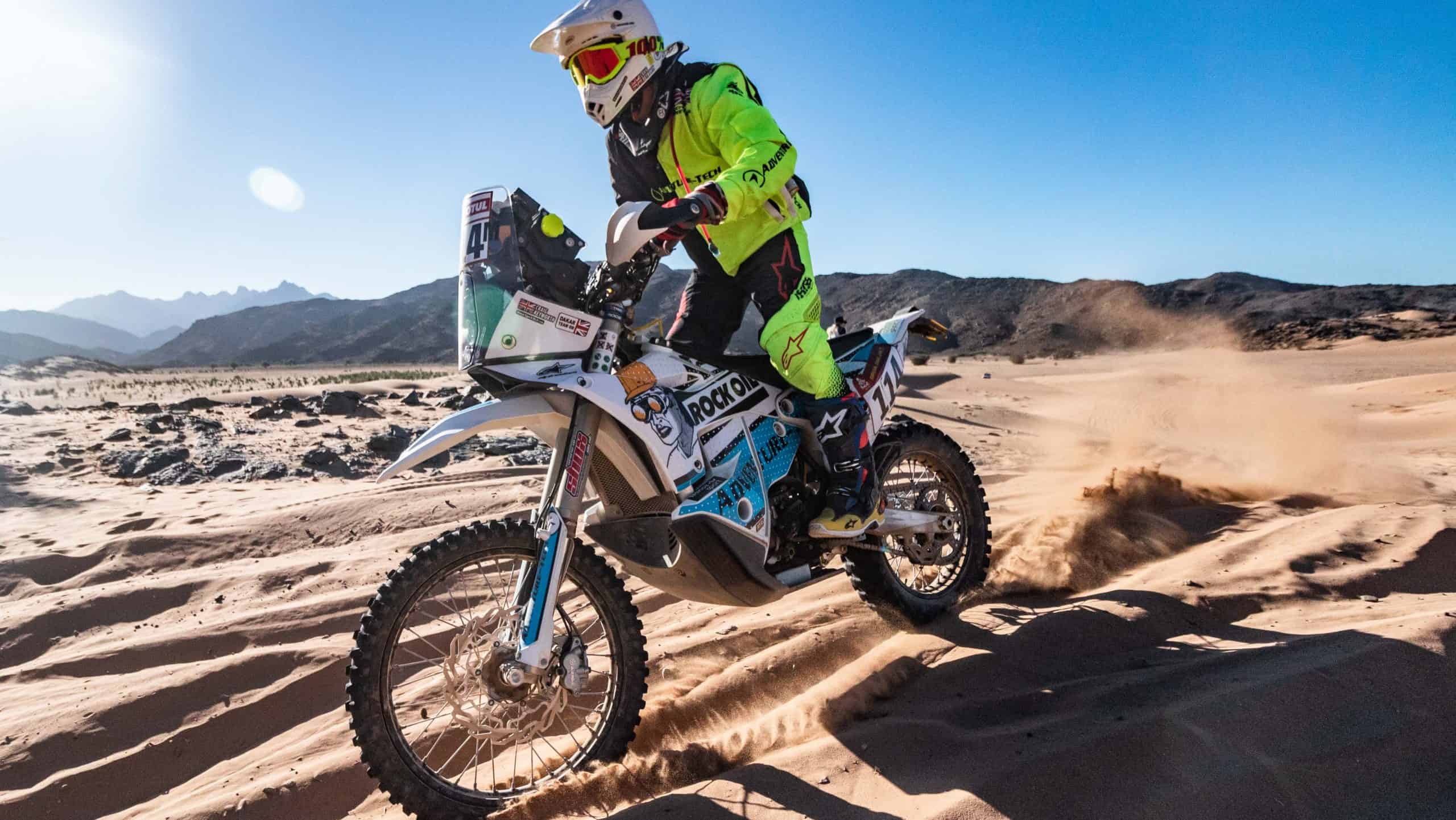 Another day ticked off. After my debacle yesterday trying to find a waypoint that proved elusive, thus collecting a 40minute penalty, as well as the penalty of the real life time looking for it, I started quite far back this morning. I was getting pretty fed up of riding in other people’s dust so decided to leapfrog some riders and put some space between me and them. It was also incredibly cold. I picked up Mick Extance on the way through and we essentially carried on pushing on for most of the day.

Mick is like one of those desert dogs, he can read tracks, sand and the Dakar like a man who’s on his 9th. He’s wily, determined and bloody quick. Much fun was had. A tough day though – and we arrived in the dunes proper. Even having spent years riding in the Sahara, Mick agreed these were bigger than Merzouga’s. They were like huge angry waves; we rode up the gentle side and dropped into the abyss like lemmings. I’d like to say that by the end of the day I was comfortable with any part of the descent or the awful G-out at the bottom, but that would be bravado. It was scary, but the kind of scary that makes you giggle like a big kid.

A bad day for Sam Sunderland, with a big crash at 190km into the 456km stage. I took a note of the distance in case I needed to go back for any spares… (The protocol here is that a broom wagon drives the stage after it closes and collects the abandoned bikes) I’ve said it before, but a solo bike out in the sand is not a good thing to see. There were three that I saw today. Another Dakar casualty is very good mate and fellow Brit rider Neil Hawker, who goes out today with a suspected broken shoulder. This is a tough race.

My fun puts me in 88th today, so this adds fuel to the theory that if you’re having fun you’re going quickly(ish). A clean day on the nav too – my missing waypoint yesterday was my first ever, I’m proud to normally keep entirely clean. Aside from the odd speeding infraction that is – which may yet happen today… but it was getting dark and that’s not where I want to be, in the stage in the dark, so I grumpily rode on.

And so to bed, after my cold shower and prison grub, for a very early start (04:30) and a very long day that is day six, and then the rest day the following day. I’m hoping I’ll still be smiling, but whilst having a lie in. That sort of positive thinking will be needed in the morning. Wish me luck.