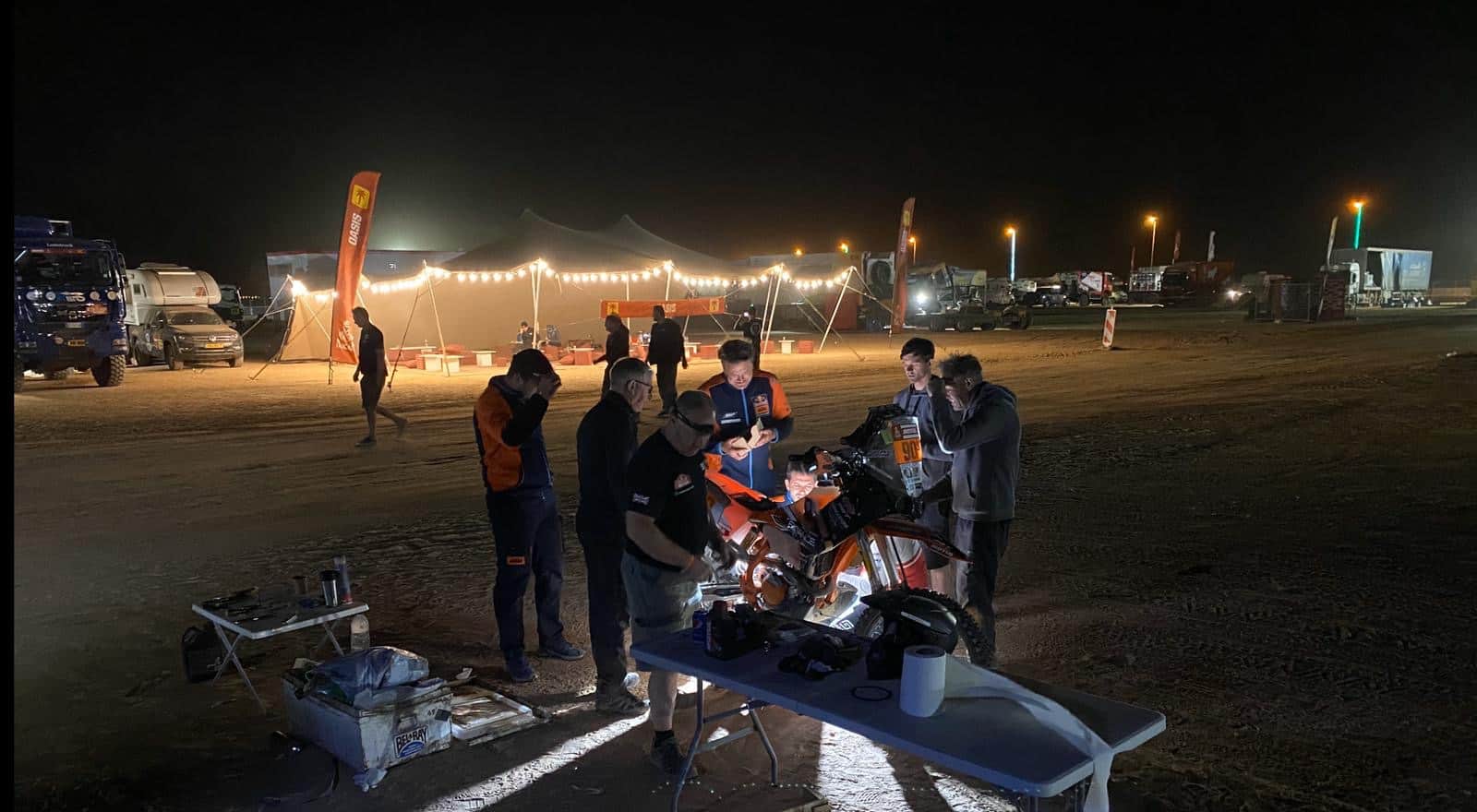 After yesterday’s accident, Stage 8 was cancelled. This gave my team mate Mick (Extance #90) the opportunity to rebuild his bike. Mick has unfortunately been demoted to the ‘Dakar Experience’ class, which essentially means he’s allowed to continue, but will not get an official position or a finisher’s medal. Mick bust a gut to get in yesterday but the odds were stacked against him. Once the tyre had shredded (remember it unseated at about 120km/h) it essentially whipped about and made a mess, including his airbox, which then allowed sand in… The following hours spent revving a small back wheel (no tyre remember – smaller OD) as well as the almost zero traction meant he was revving the nuts off an engine that was filling with sand. That’ll never end well.

So it was all hands to the pump today. Typically Mick brought a spare engine, but also typically it wasn’t a new one, rather a rebuilt ex school bike engine that while having a new crank and piston, had a head with a closed-up valve and arrived with a dodgy starter. We made a bit of a Frankenstein’s Monster of the two, and about 30 minutes ago I left Del and a gaggle of the KTM works team mechanics trying to get it running again. We’d had it going but seemingly the second starter also failed, and it turns out this wasn’t a new one either (it was on an otherwise brand new bike though…) He’s the Yin to my prep Yang, but we’re pleased to have him. Not his mess though!

There’s no reason for the three KTM team mechanics to be involved here, but they’re parked across from us and we did go and beg some parts earlier in the day, but they’re here because they’re keen to help. They’ve packed up their own gear and the full team had gone for food, these lads want to see Mick’s bike out tomorrow and it’s a representation of the bivouac as a whole. Our team van has been late in more than once as they’ve stopped and put a tyre and mouse on a stranded bike, which has then been replaced with a new one the instant it’s been pulled of the recipient’s rack. For sure it’s a competition, but it’s also a huge caravan of people that love a challenge and want to see, join and enjoy everyone’s passage over the line.

Today I was donated a pair of home made hand muffs. They’re made from duck tape and food bags and look awful – and I’m so grateful for them. Rider #120, Taye Perry, who’s currently sitting third in the women’s class and 51st overall, has her dad out here. We know each other from riding together at Merzouga and her dad made the Muff Mk1 for her the other day, but has been usurped by her mechanic who’s made some impressive Mk2’s, so she came over and gave me the Mk1’s. Tomorrow’s 04:18 start will be a 370km liaison and those muffs are going to be the favourite part of my £30k rally bike….

I’ll be back in tomorrow evening, and hopefully feeling as good as I do today. Looking forward to riding again, and I’m heading to bed in preparation. Getting there.