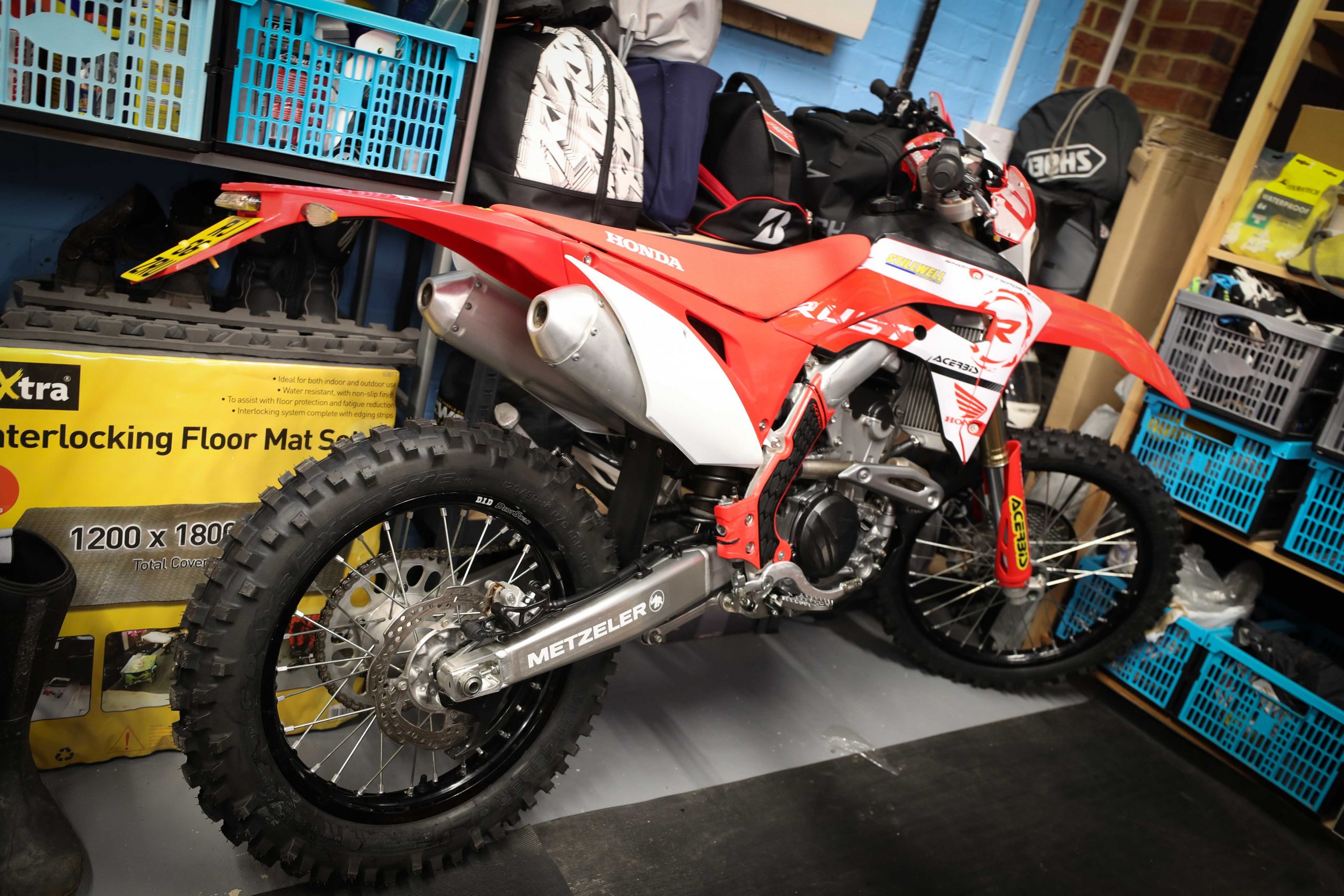 The Honda’s very first run was the Brechfa Rally, one super-chilly late winter weekend. Just 190 miles of fast trails over two days – a nice way to run-in the motor, maybe! After that we shot over to Yamaha Off-road Experience in even-deeper Wales to check out its performance against a class benchmark – the Yamaha WR250F. As a way to get to know the little red rooster we figured a good eight hours in the saddle might do it.

This Honda CRF250RX has about as much in common with its predecessor, the CRF250X, as the X had with the XR250 that went before it. Okay the frame looks similar, both are lateral beam type in aluminium, and the colour – yes, red – but after that, this is an all-new bike, with an all-new demeanour.

It’s one helluva trade-up, in evolutionary terms, that takes us on a transition from a 28hp gentle trailie to a 45hp screaming banshee of a racer – in one giant leap. The RX is all about sharp race-winning potential; it has the capability to take on the best of European enduro tackle and quite possibly win. But before doing that, maybe we should figure if it’s the best from Japan, as we can’t overlook that other Oriental wunderkind, the Yamaha WR250F. 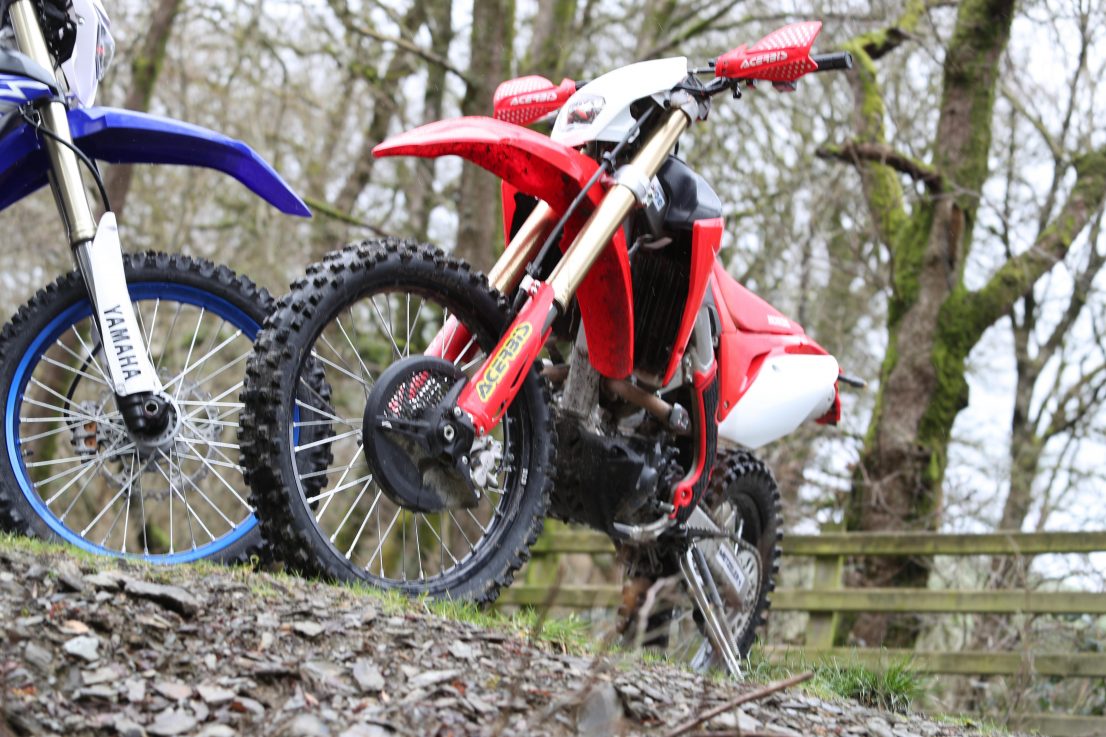 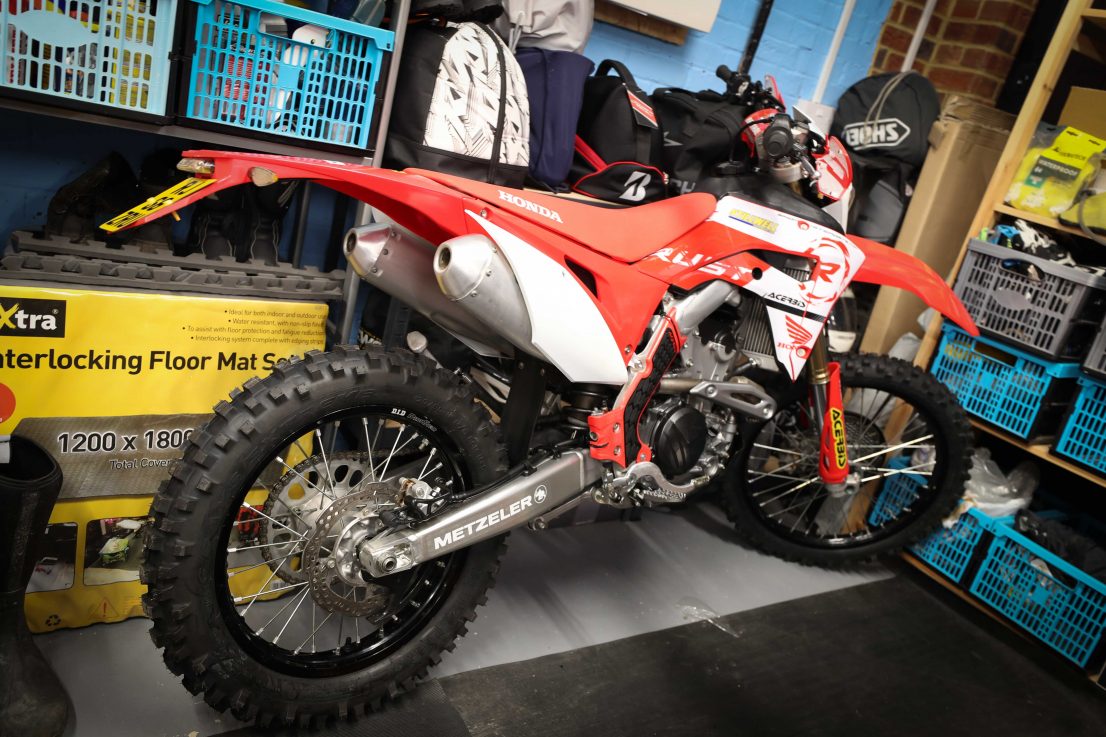 How much we should go on about the tech is debatable, after all there’s Honda’s own website with all the data, so why copy all that info? What’s significant – we should cover that, though. Like the motor. It’s no longer a Uni-cam (kind of SOHC), now a twin-cam (DOHC) unit. It seems when it comes to extracting maximum go from a small four-stroke unit this is the way to go, not to mention the fitting of Titanium valves with oval springs and twin exhaust ports (and so twin exhausts).

This motor debuted in the 2018 season in Honda‘s CRF250R motocrosser, it got updated for the 2019 season (improved, with 9% more top end honk) and it’s this very engine that sits in the RX, with very few modifications. The motor, physically, seems all but identical, it’s the electronics package that’s changed, having been given new (‘softer’) ignition and fuelling maps to suit off-road application. Otherwise, the top end performance and just about everything is identical to the CRF250R. So for an off-roader it’s one potent package.

Likewise Honda has done the minimum to adjust the chassis to off-road. There’s an 18” rear wheel, a larger 8.5-litre tank and a sidestand while the suspension has been given off-road settings, including a lighter spring rate in the forks. It is then barely an off-roader and certainly a long way from a conventional enduro bike – don’t be fooled by the lighting kit so neatly applied by Honda UK, this thing is no trail bike – to use the cliché, it’s weapons-grade. 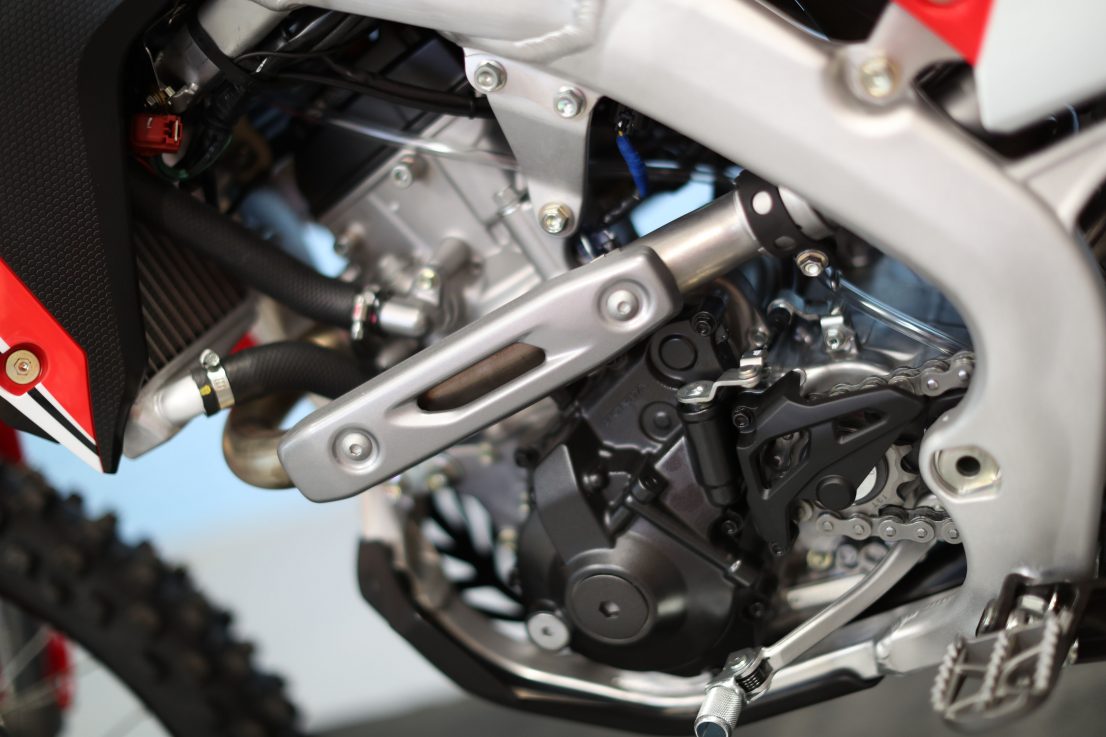 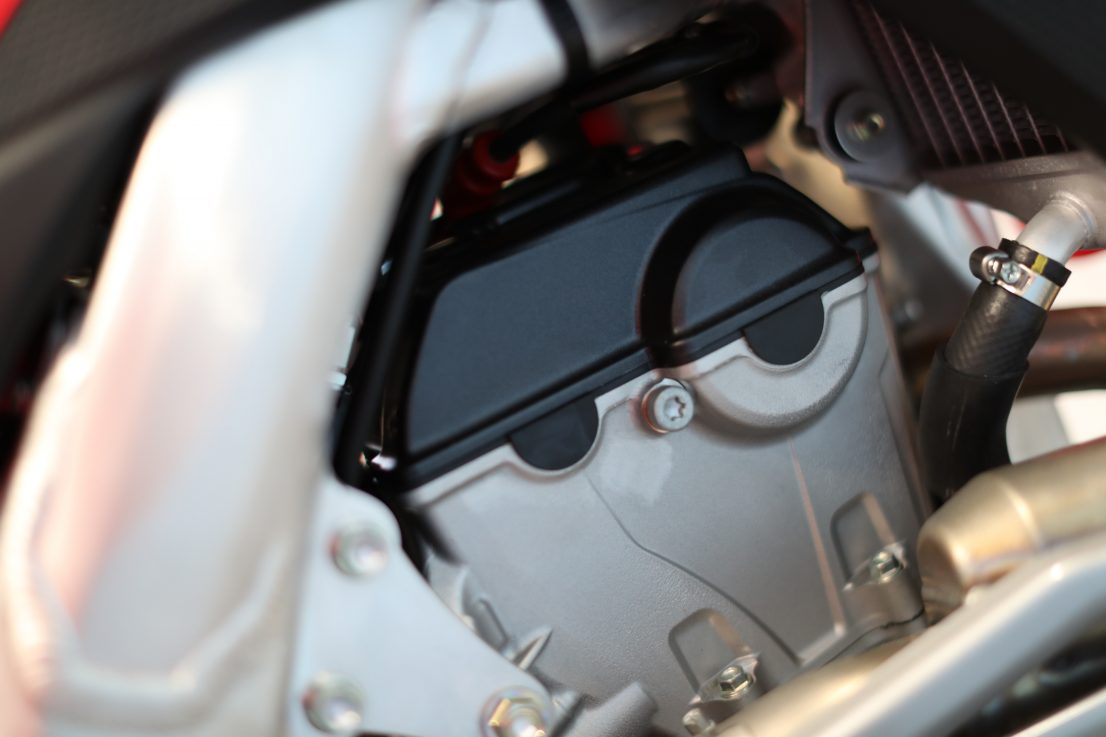 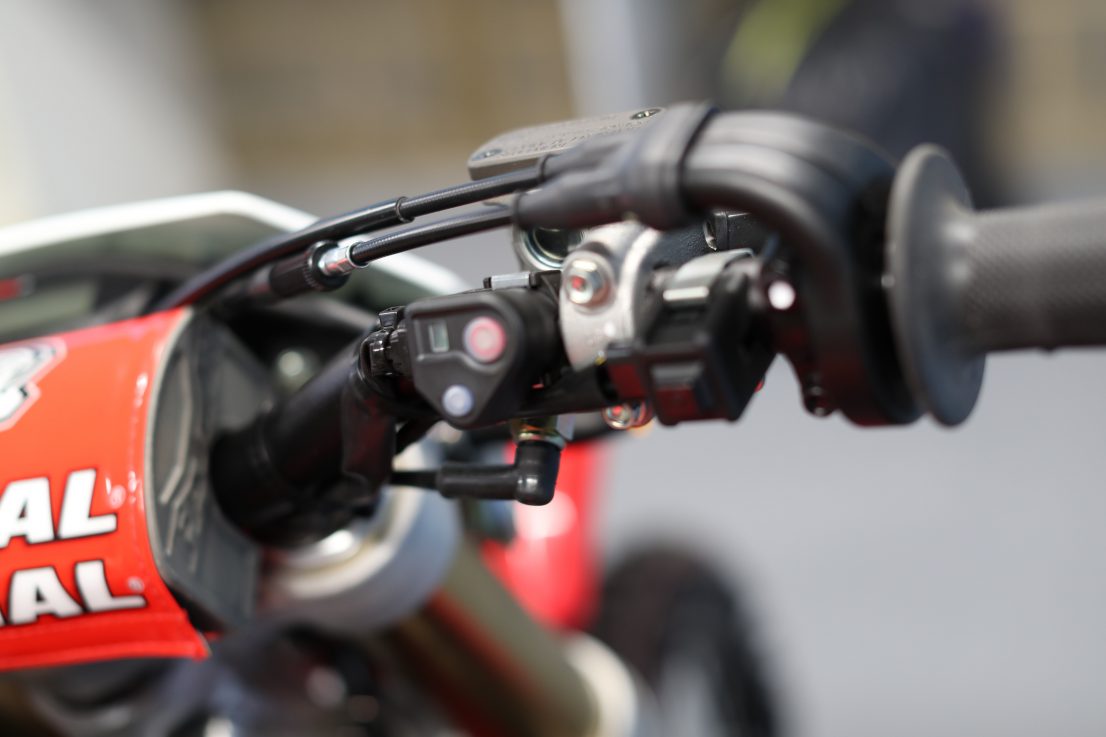 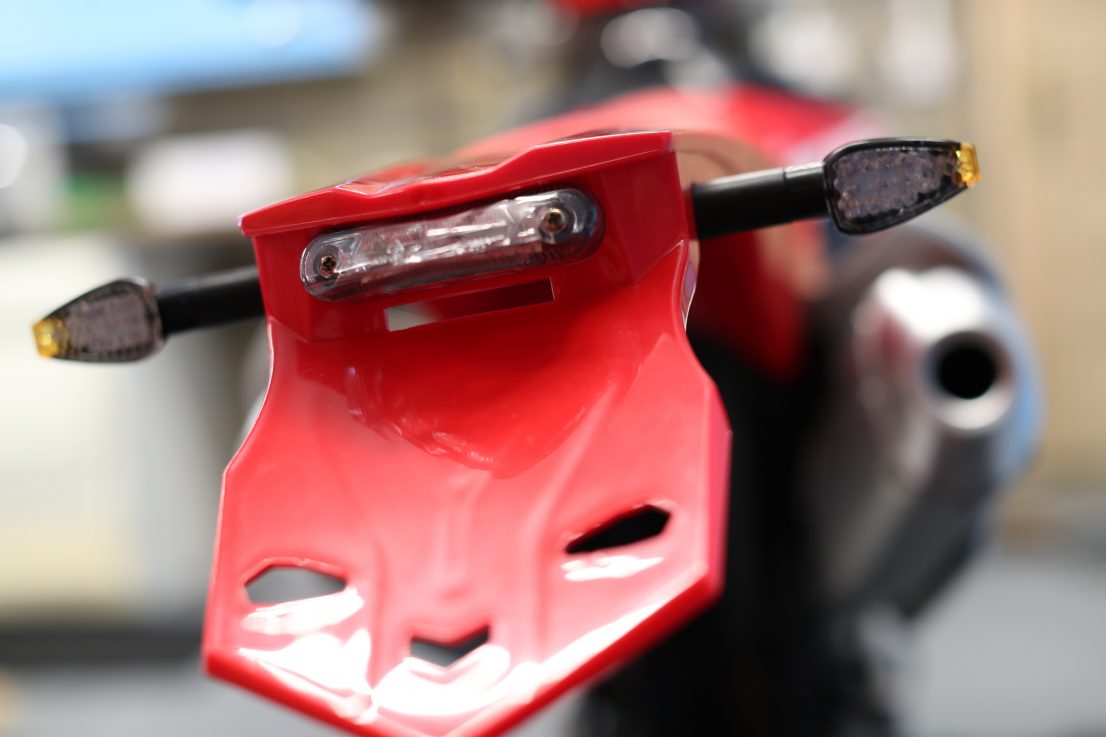 It is, though, a Honda – and it’s rare that Honda make downright evil bikes (although by heck they can make potent ones, like the legendary CR250). And with this CRF250RX, for all the potency it maintains a sense of civility. There’s a lot of power to discover, but the long and linear rev of this engine means it’s delivered without surprises, you dial in only as much or as little as you want.

The pull from the low end isn’t obviously strong but it is consistent, it doesn’t bog, instead it digs deep and delivers. If it’s not coming fast enough then dip the clutch and get the revs up, then it truly leaps forward. Mid-to-top brings only more creamy-linear delivery. At first, while the engine was tight, it all felt like it was too little, and too short. Fifth gear is found early as the gearing is close ratio and short. But when the engine loosened up and the full range of the rev was discovered (14,400rpm is a long-long way out) you find there’s a heap more on tap. Sometimes you think you’re fully tapped out only to find another 3mm of throttle cable and with that the motor winds up another octave! It is some engine, for sure, and wrung out it makes sweet music, at least for those that like high-pitched screaming four-strokes.

Handling is also so very Honda and not a little unlike the CRF250X. It rides stable and kind of low feeling. Maxed out on fire roads it was impressively stable – not a worry – but it was equally happy flicking through the tight stuff. Perhaps not quite as sharp turning as a KTM, but there’s not that much bulk to this bike so quick steering in this category is all relative – you’re not really wanting for more turn-in, that for sure. The low-riding feeling reminded me of how the old CRF250X used to feel great on a grass test, it kind of hoovered along and you felt a lot of confidence and a lot of feedback from the tyres; the RX is similar, a bike you can press into a turn with your outside thigh and knee and gently push it deeper, tighter into the turn. 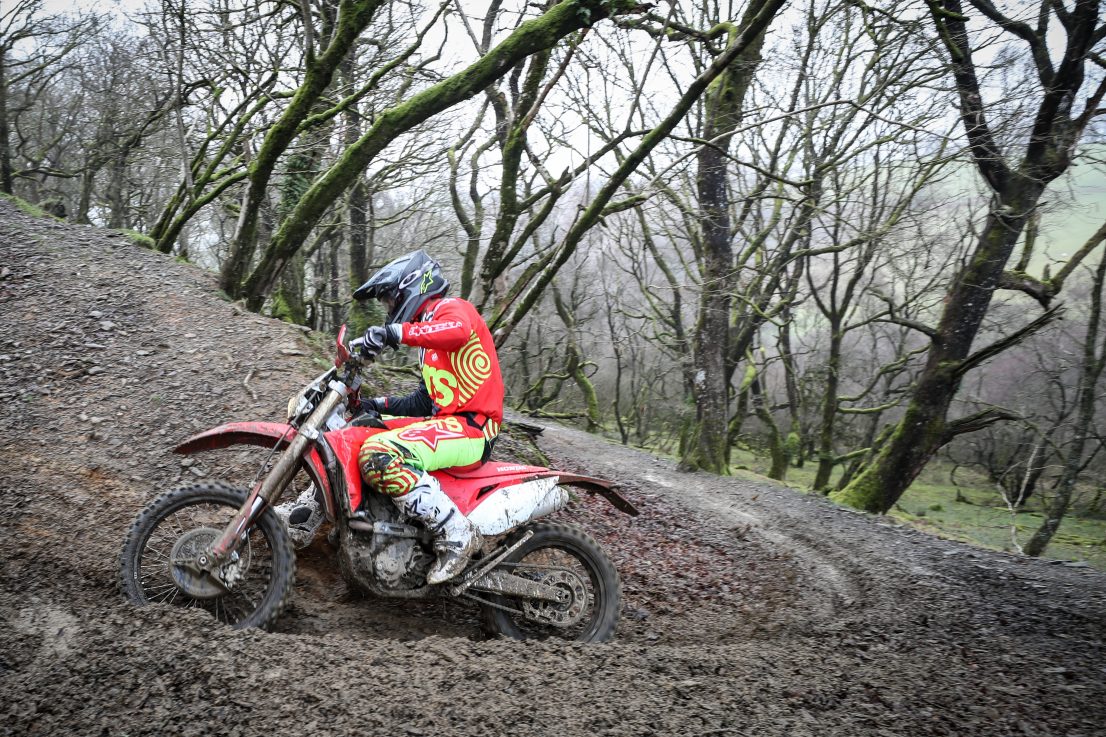 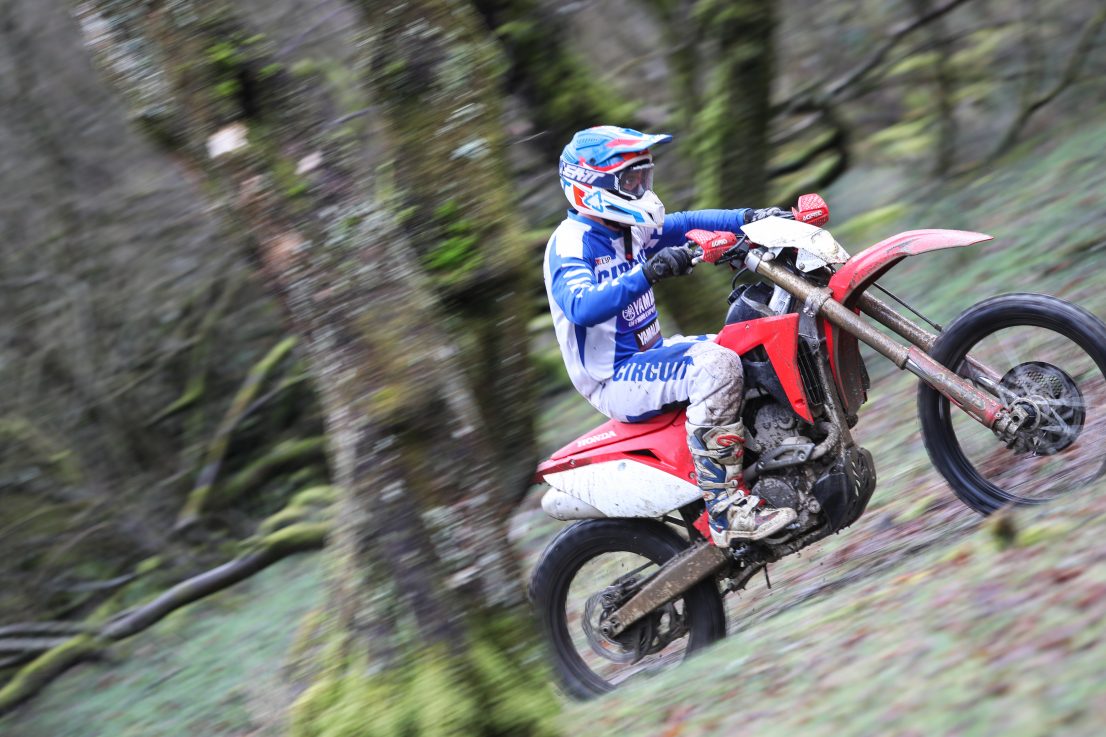 The suspension is very good. It bedded in quickly and with no time spent on the clickers – just riding exactly as it came out of the box – it felt pretty damn good, smooth and competent. Perhaps it could be a little more supple on the small choppy roots, but equally with some time and attention applied to the adjusters that could come in any case. But out of the box, it felt good, real good.

Ergonomics are surprisingly comfortable for a 6’0” rider. It’s probably more rangy than you first think, and there’s no feeling of being scrunched up or pushed too far over the bras. Talking of the bars – Renthal Fat Bars (a nice fitting) – these feel low but suitably so, so you’re more connected to what’s going on. Seat-footpeg-handlebar spacing all felt good, too. Very natural – so very Honda.

It’s kind of odd. The RX is almost twice as powerful as the old X, yet it’s no mad axe, it retains the old bike’s accessibility and ease of use. It lacks the six-speed wide-ratio gearbox, the hydraulic clutch and a few of the trimmings we expect from an enduro (although, as said, Honda UK have plugged most of the gap there) – and is clearly meant to be a cross-over machine for motocross and cross-country type events – but enduro is easily within its capabilities. Put the engine mapping into the smooth option (there are three: smooth, standard and aggressive) and the X-type nature is all the more apparent, the RX really can be very peaceable, and a real traction-master.

So, we pitched the RX against a new 2019 Yamaha WR250F. The WR got a few updates in 2018, including boosted bottom-to-mid thanks to a new cylinder head design with reshaped ports and a shortened intake funnel, and a new frame, essentially that of the 2018 YZ250F which features a wider central beam.

It still largely feels like the old WR250F, but the new motor character is obvious, it punches a lot harder off the bottom. And while the chassis has been updated the general responses are largely the same. Compared to the Honda, the Yamaha feel taller, and in tight stuff, tippier!

Here at RUST we had a 2015 WR250F for about three seasons and grew to love that bike. Most notably it came with a full Akrapovic titanium exhaust, and just as at the original launch, we preferred the way the WR ran on that pipe – the Akra seems to smooth out the motor, it runs sweeter bottom to top (and sounds better too – without being that much louder). Our test Yamaha on this occasion had the stock pipe fitted and this, explained Dylan Jones of the Yamaha Off-road Experience, accentuates the new bottom end torque hit and so at YORE they too prefer the power delivery of the WR with the Akra. 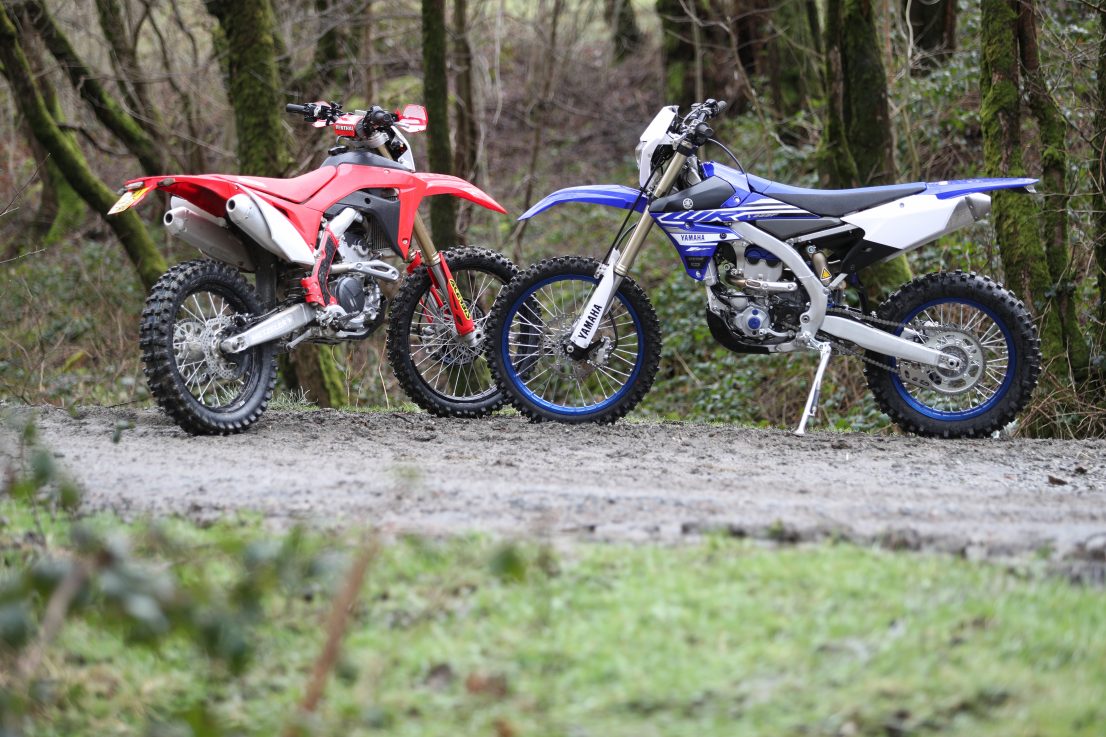 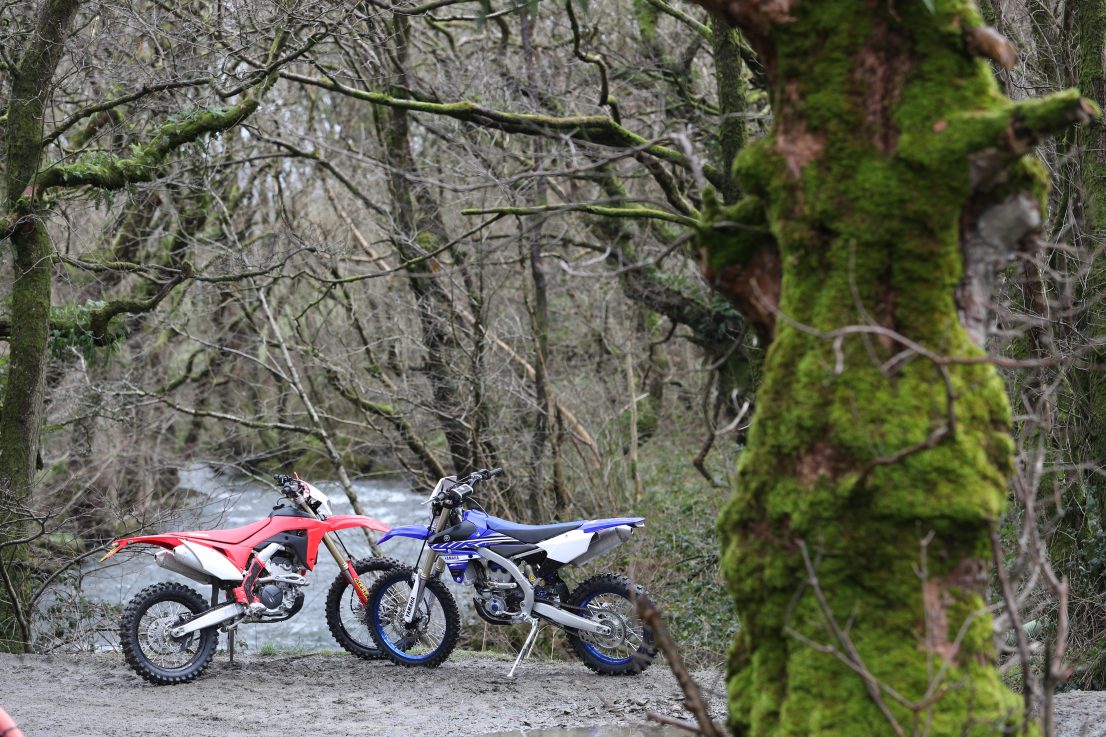 Riding around a short course in the woods, swapping between the Honda and Yamaha, here’s what we found: 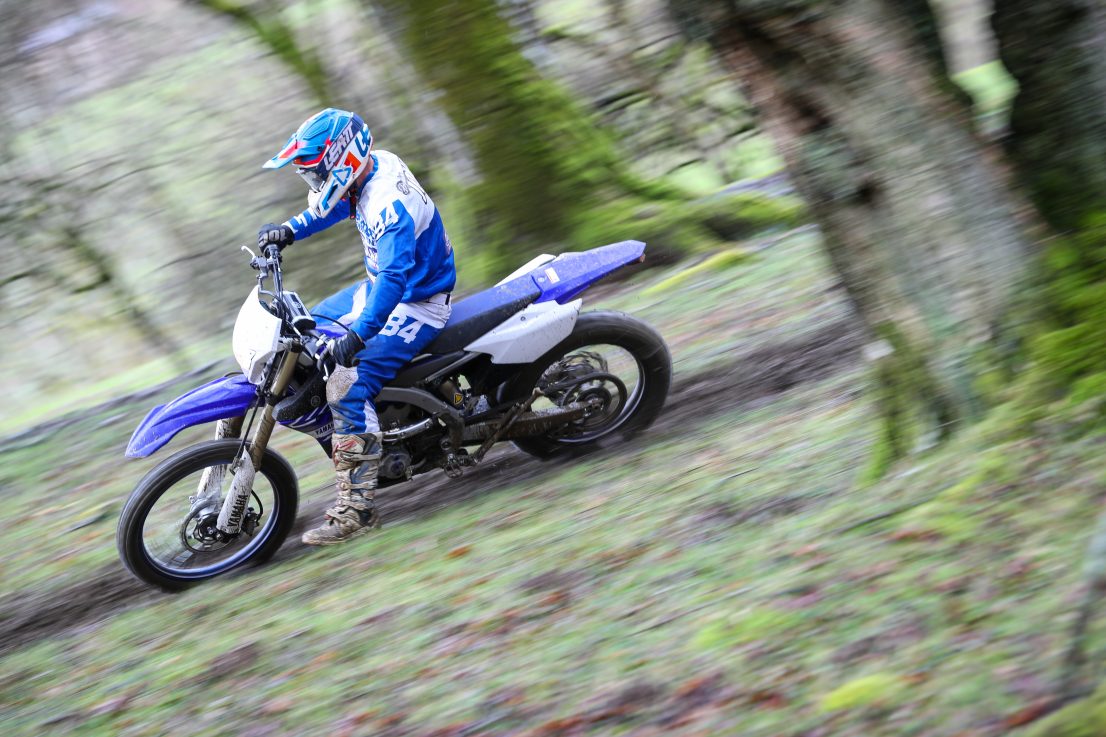 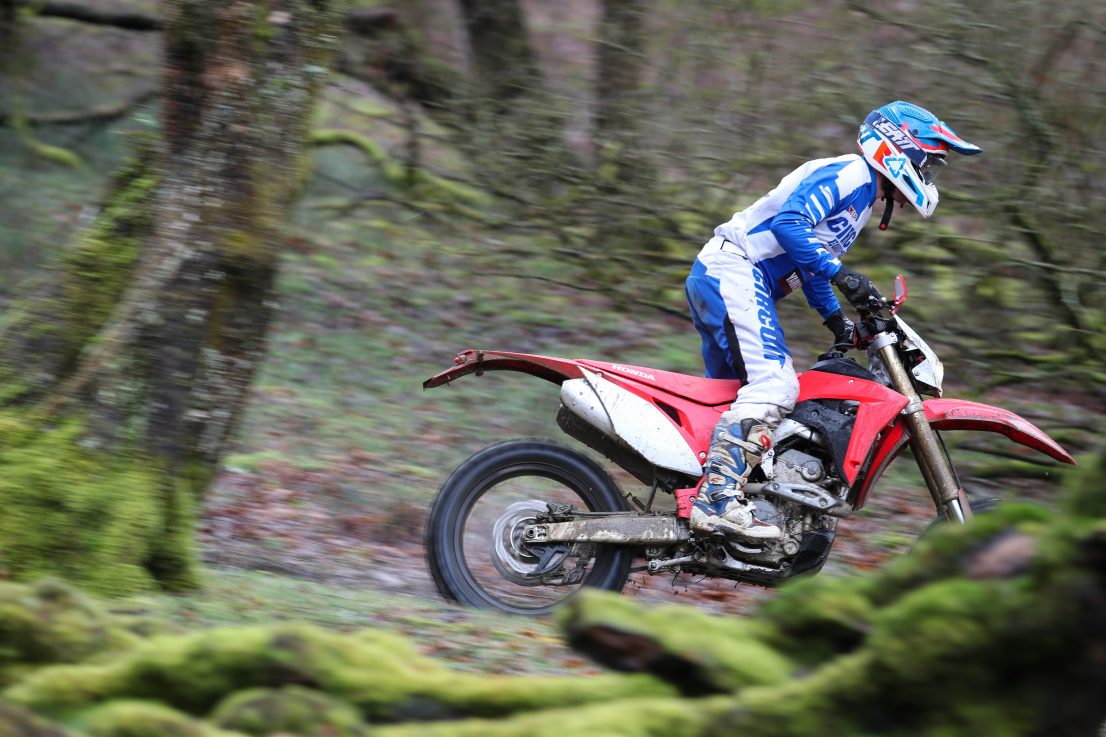 One thing was for certain; the Honda was in for the fight. While still having a five-speed gearbox and still being not much more than a lightly modified motocrosser it was able to match the enduro-specific Yamaha in a woods environment. Dylan says the Yamaha actually better suits a more experienced clubman rider, rather than an absolute beginner as it’s quite a hi-po machine and certainly in the slippery winter conditions we rode in, the Yamaha took a little more input than the Honda to navigate its way around the tracks. That’s not to say the Honda is so much easier to ride, or better, but the two are very different.

In what was quite a short test we couldn’t establish a clear winner, but we could tell that the Honda is right on the money and every inch a match for the Yamaha, which pretty much makes it a match for anything in the class.

For now we’re super-happy with the Honda. It’s that sweet mix of being real easy to ride – as 250cc four-stroke enduros should be – and actually very competitive, too. It’s suits this older, slower clubman rider, but it stands to make him faster and more competitive too, as it asks little and delivers big. We can’t wait to try it in a local enduro. 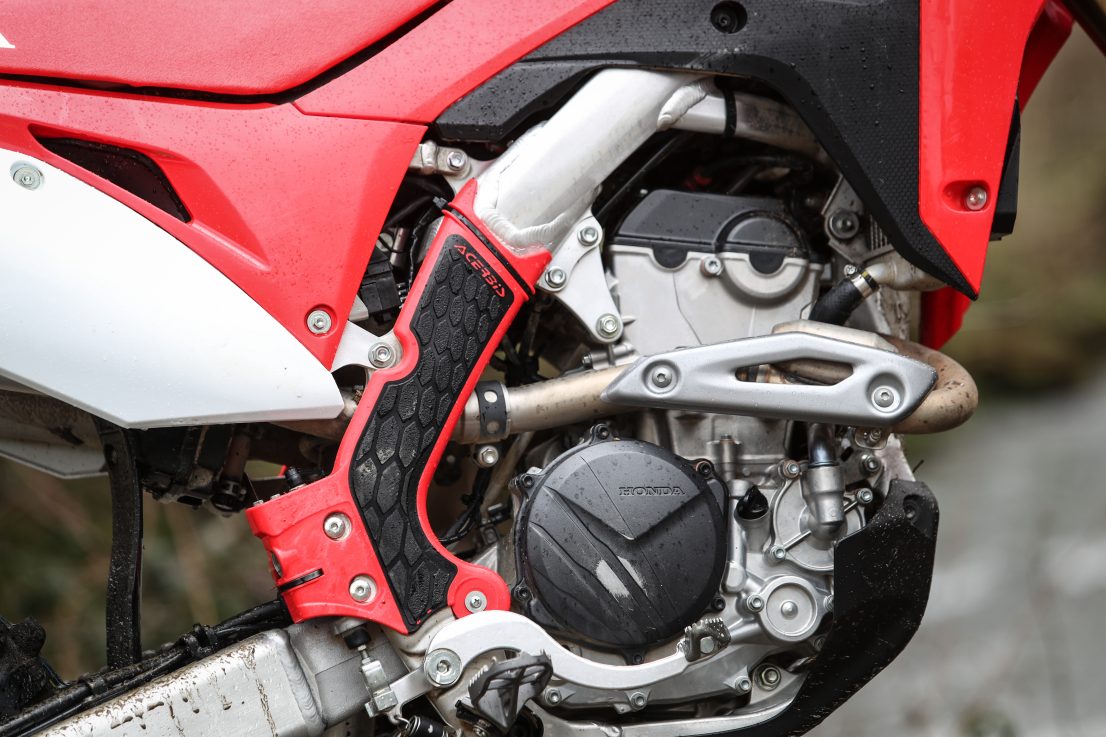 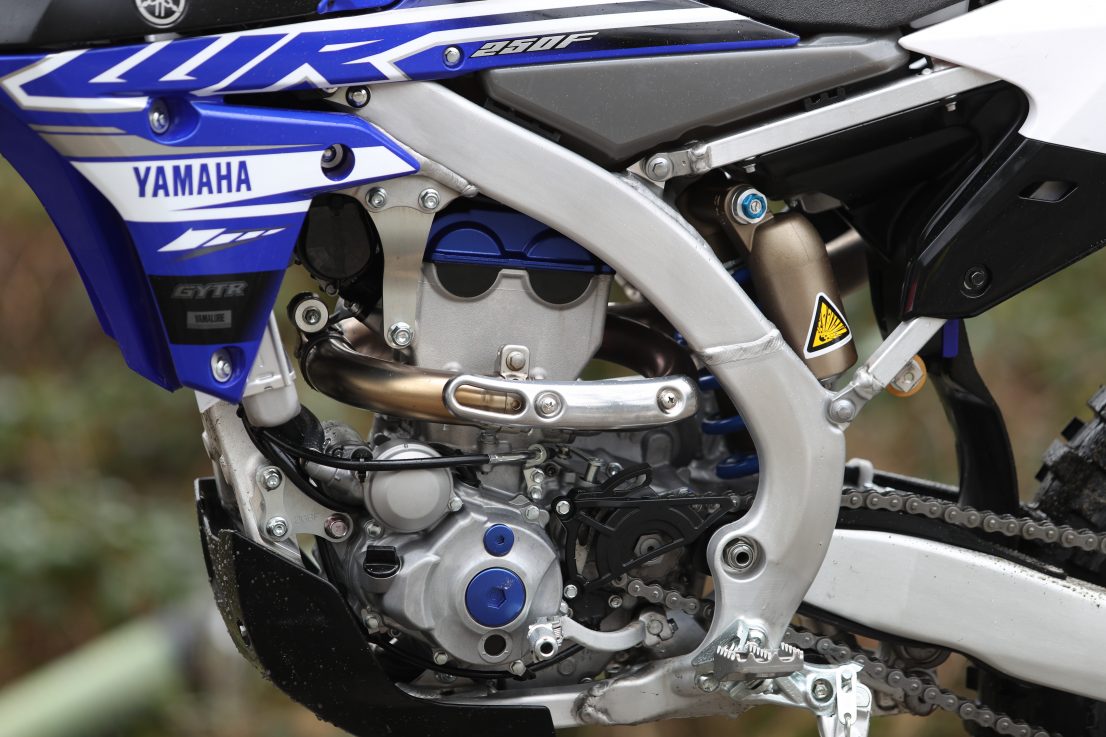 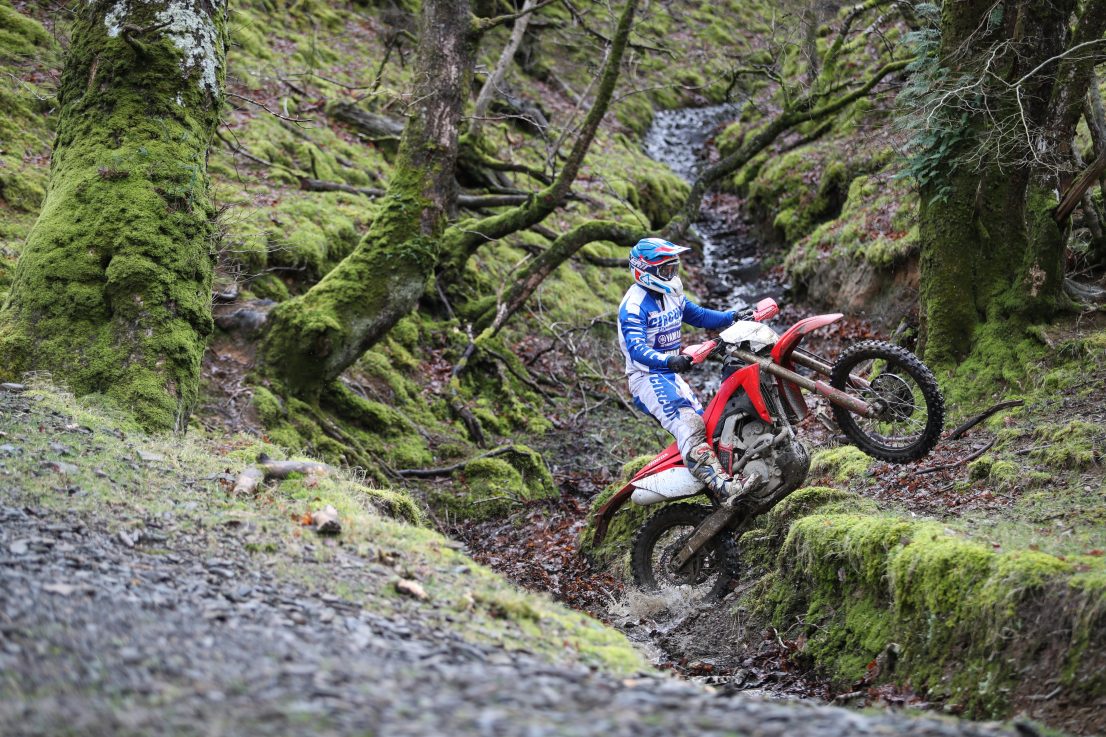 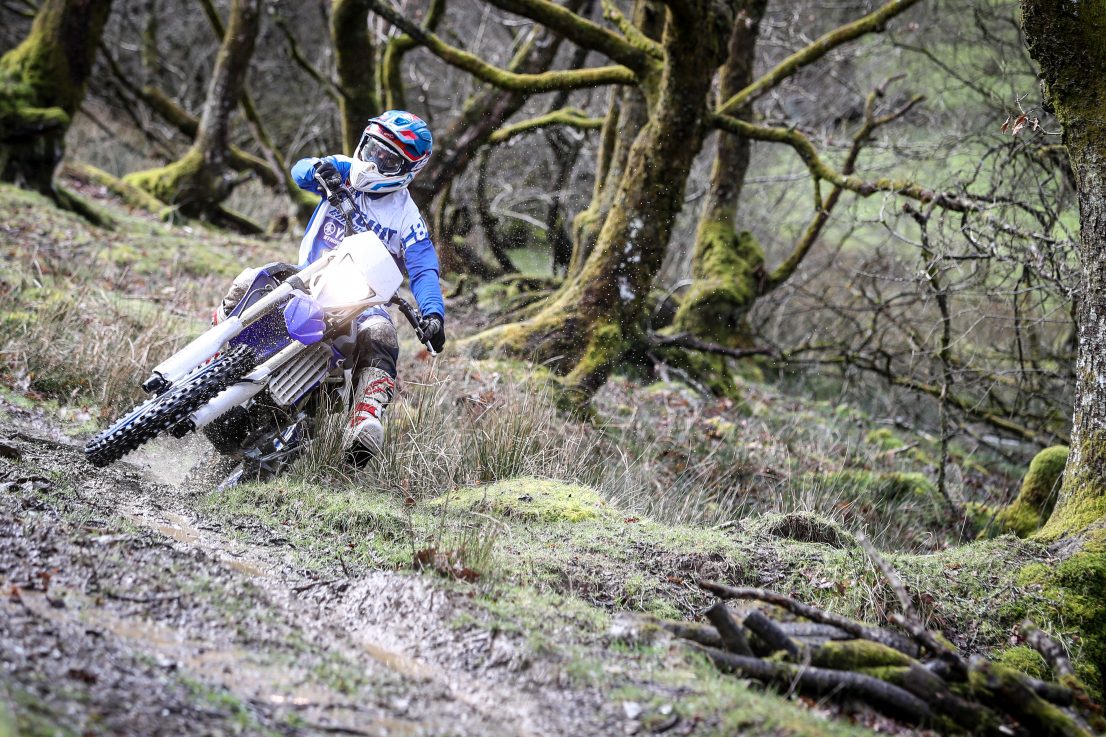 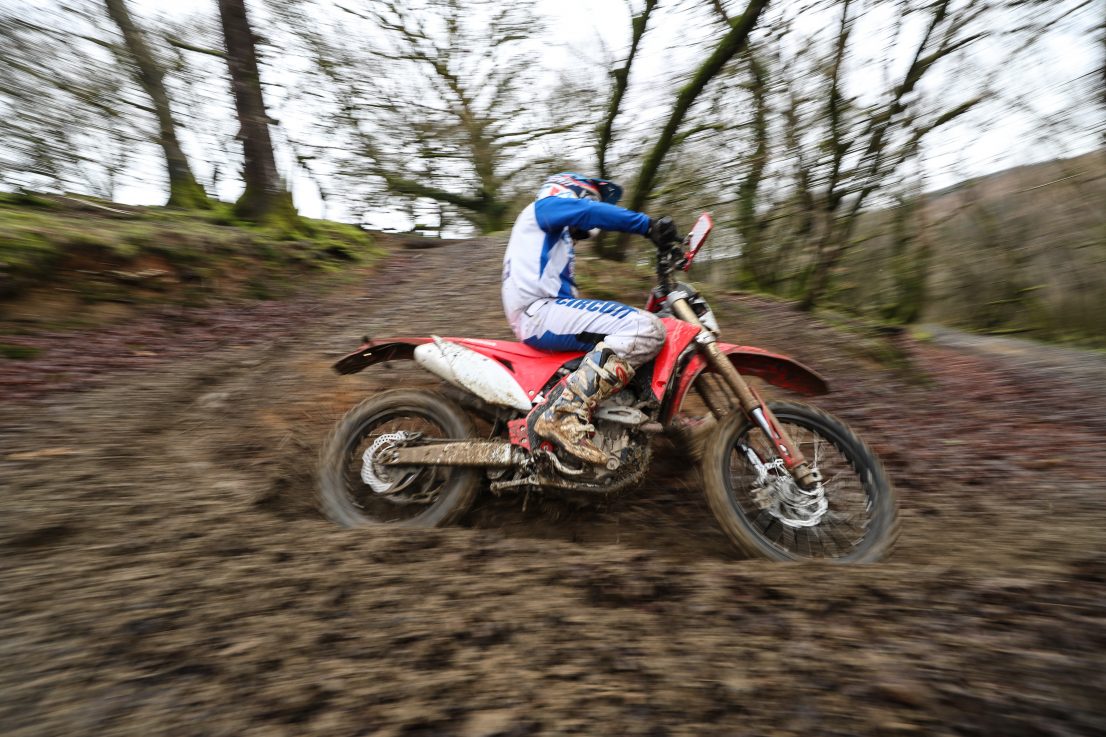 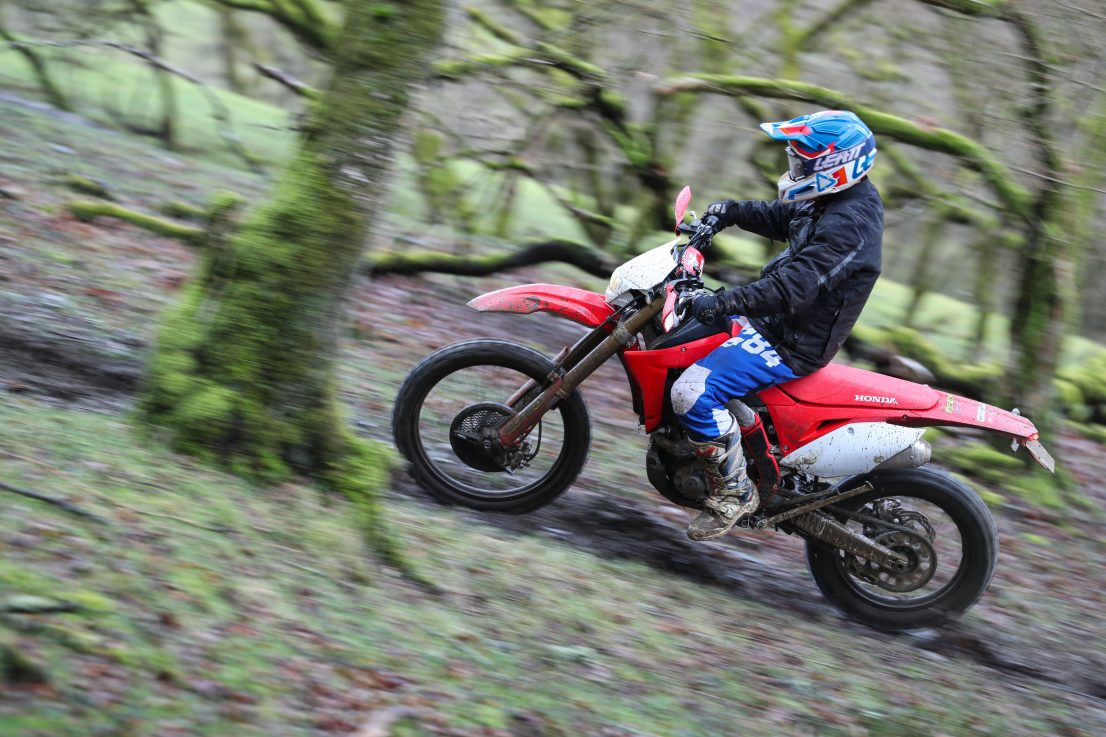 Even though this isn’t our bike, we couldn’t bring ourselves to trashing the OEM plastics. So opted to put these carefully away (to refit on that imaginary resale) and fit an Acerbis full replica plastics kit, to which we added a set of X-Grip frame protectors and X-Ultimate hand guards (all of this stuff is great quality and fitting is a doddle). The standard sump plate looks pretty good so we’ve left this for now. Our planned custom graphics weren’t available in time for this test (as you can see), but will come from LR Designs ready for the next outing. Likewise, we rode on OEM Dunlop AT81 tyres – which are a cross-country off-road spec tyre –but will be changing to European competition homologated (as required by ACU rules) Metzeler Six Days for regular enduro riding. 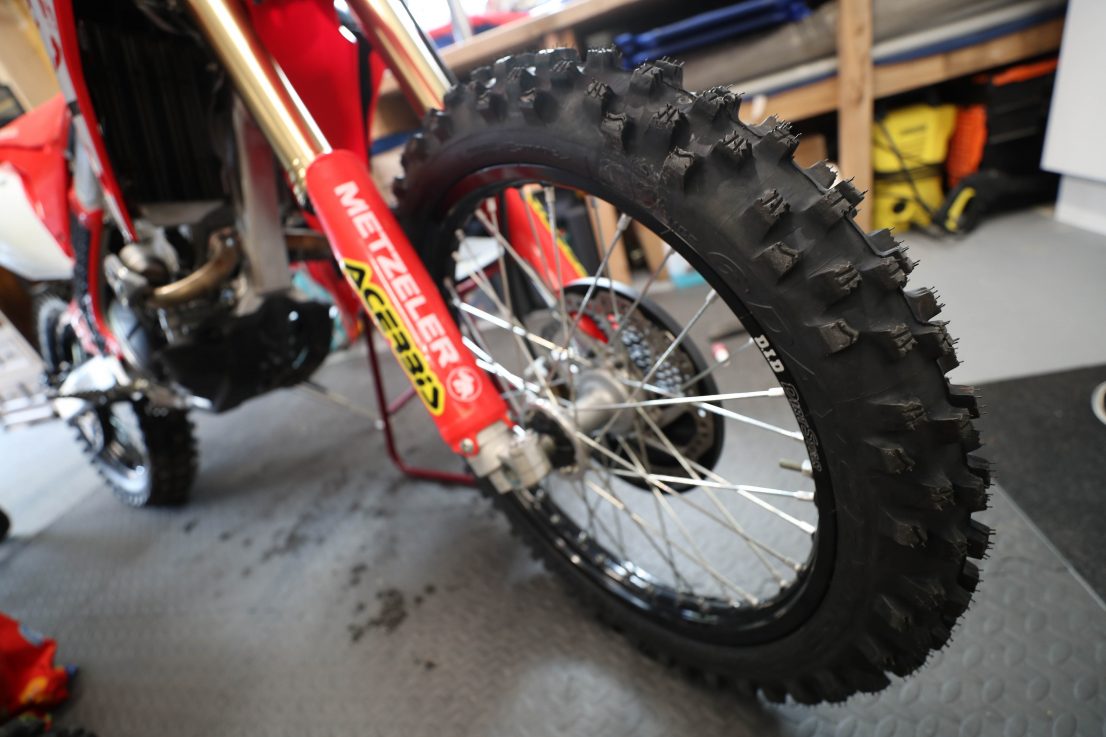 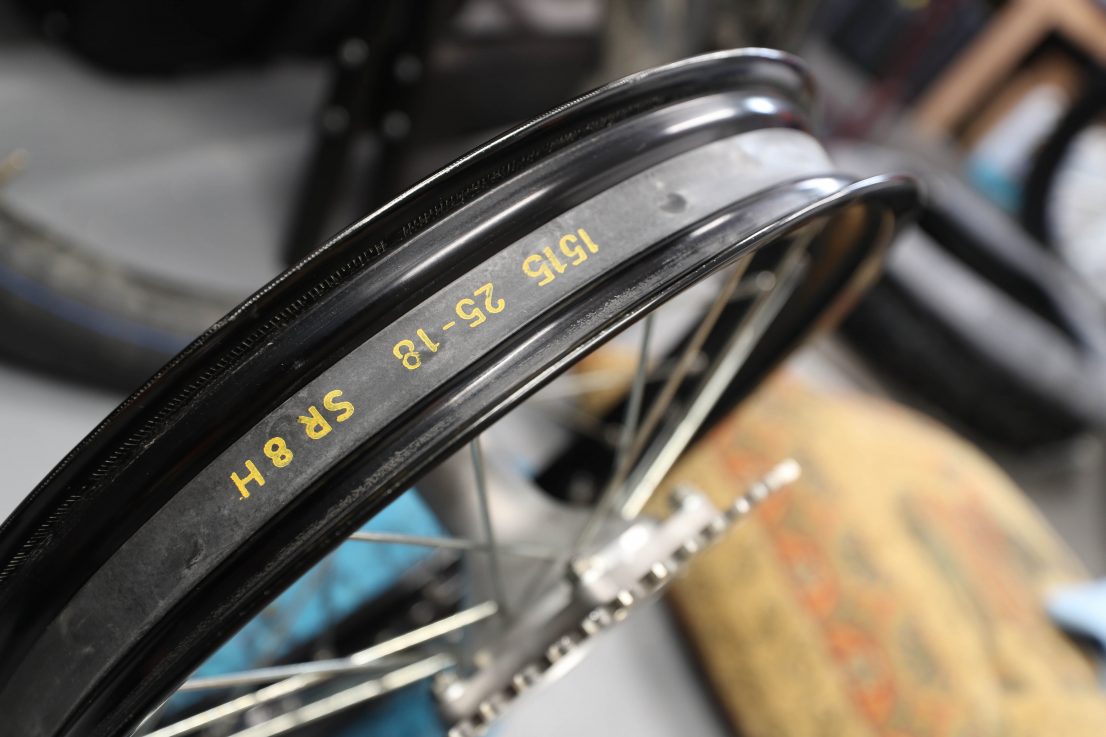 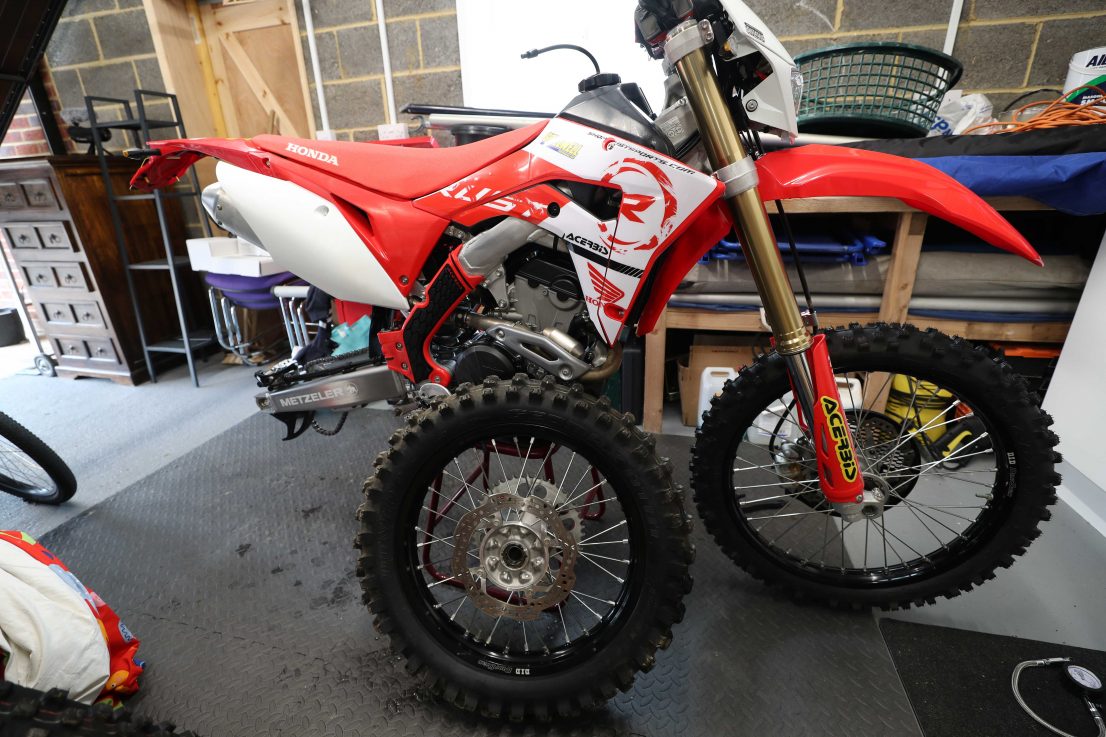 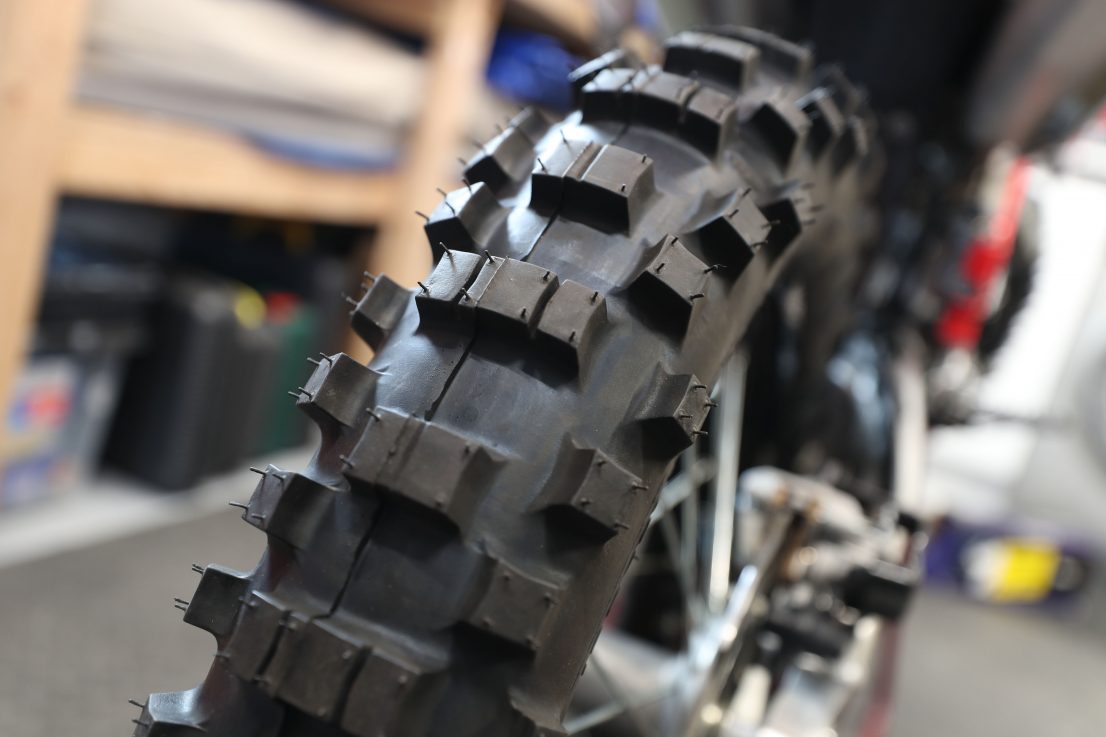