in conversation with… jessica gardiner

If you could make a bigger entrance, please write in and tell us how. When 19-year-old Sydney girl Jessica Gardiner made her first appearance in the EWC last year she literally stunned the amassed Spanish GP crowd.

It was the Friday evening ‘Super Test’ prologue and Jess was the very first rider to line up for a go at the 1.45-minute dash. Being that the women’s class rode the test first and had an odd number of riders, Jess went in (with the highest rider number, 77) first and alone. The course, untouched by FIM-legal knobbly, lay before her. The commentator gave a quick explainer to say here was a young woman all the way from Australia, first time in EWC, just arrived off the plane three days earlier etc. Then the starter gave her a countdown and Jess was away, revving her Yamaha WR250F fiercely.

The course immediately ran up the hill side in an arc before making a hairpin turn onto a huge scaffold that took the riders along planks directly out from the hill for a fair way. At the end, now some 30-odd feet (10m) up in clean air, there was a perilously steep set of planks leading down.

Jess never even contemplated the ride down. Once around the hairpin she just piled on the revs and gears to the point where everyone understood exactly what was coming next – Jess was going to jump down, like a regular Evel Knievel. And she did. However tall it was, even 30 feet sounds conservative, it felt like an age before she hit the bottom, all was silence except for the odd blip of throttle from Jess to keep her Yamaha flying true. It was a fair hit when she landed, easily bottoming out the suspension, and then some, but Jess far from being spread-eagled, teeth knocked out, ankles broken, was instead straight-away on the gas, looking to set a fast time. The crowd went from silence to uproar.

From a field of around 120 of the best riders in Europe, only a half-dozen other riders did what Jess did. How did she have the nerve to do that?

“I wasn’t sure what to make of the scaffold, we don’t do anything like this in Australia. So I asked Alex Salvini – a works rider with Husqvarna at that time – what to do, and he said, ‘oh, jump down.’ I didn’t realise he was joking!” 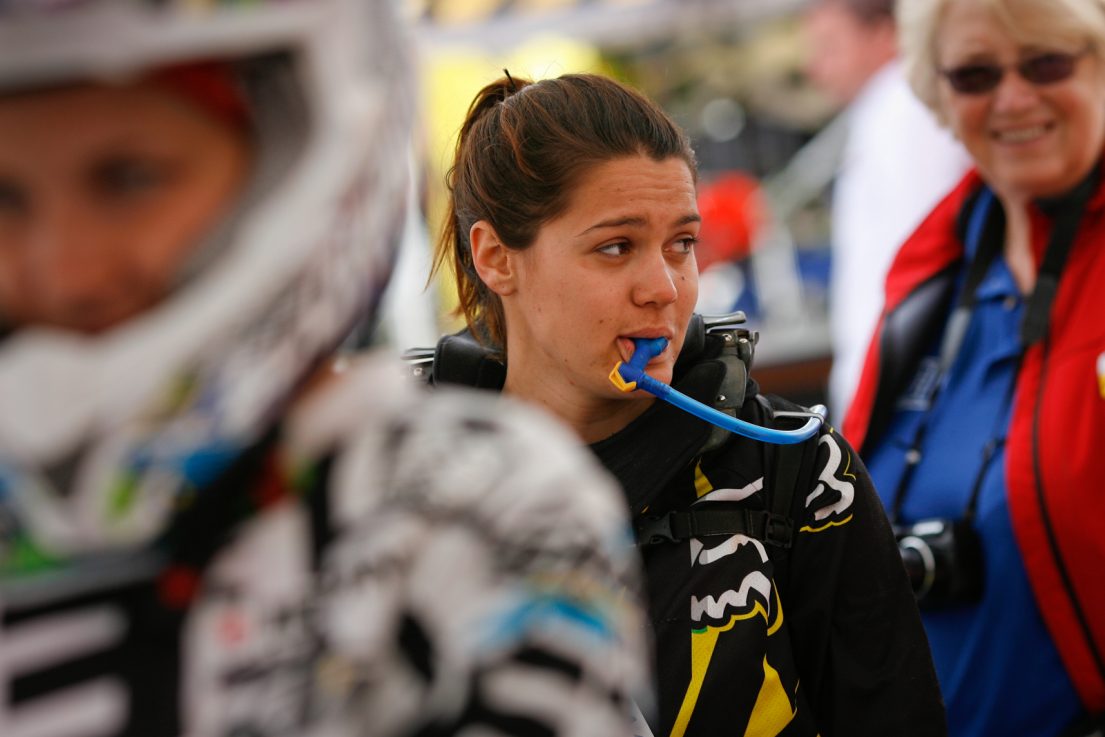 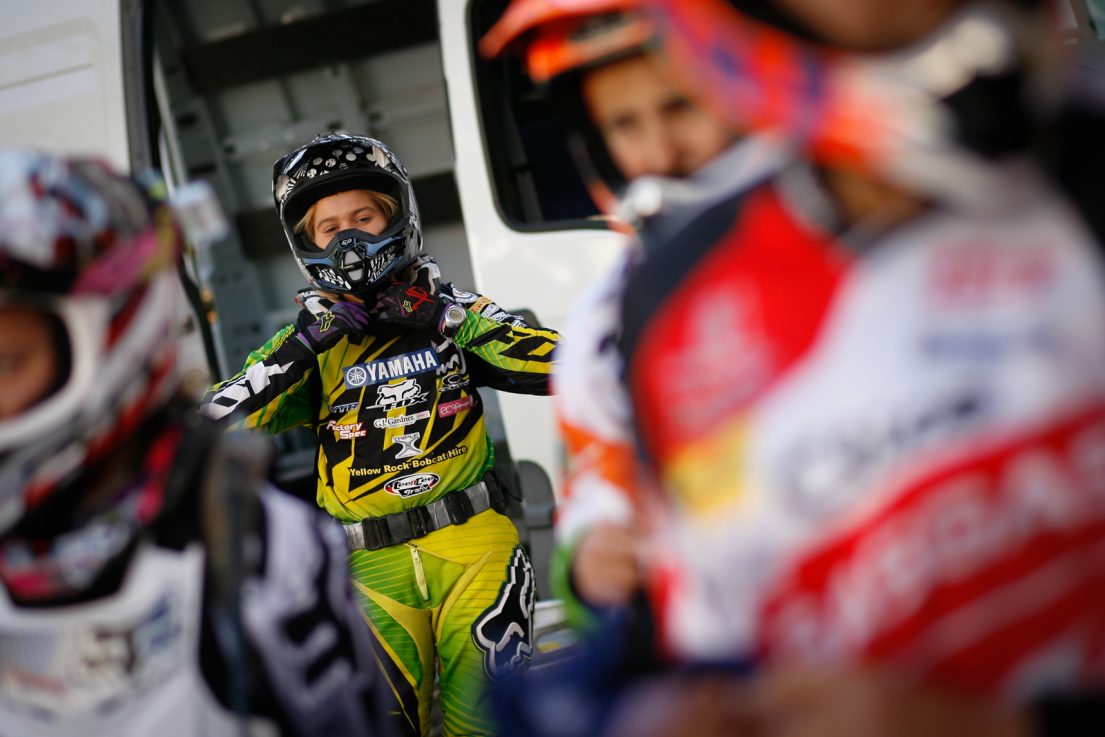 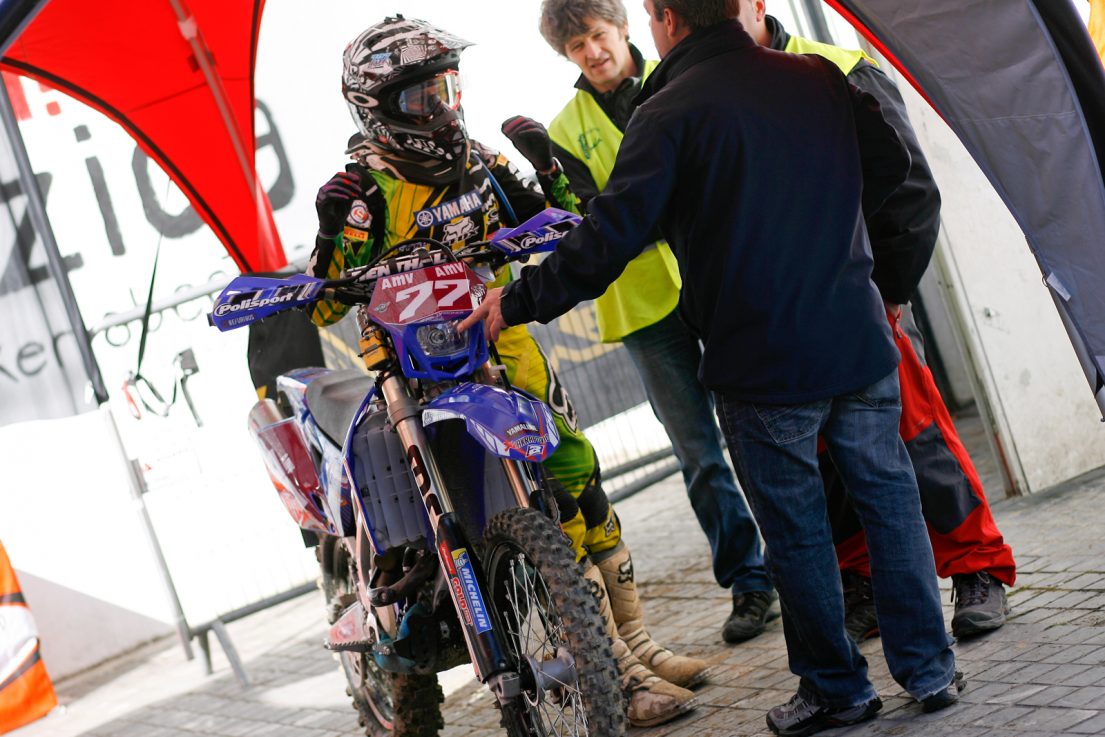 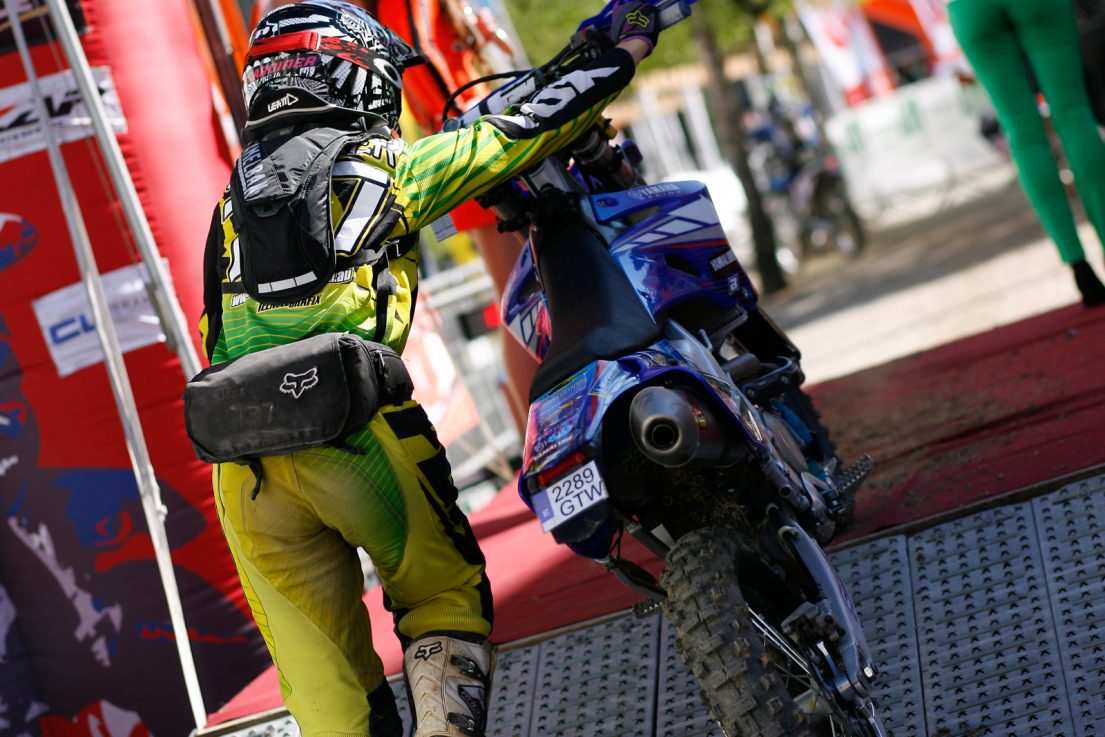 THE CAN DO GIRL

What is even more amazing, perhaps, is that Jessica arrived in Spain based on just nine days of planning and preparations. There was no big build up, she simply saw that fellow Australian woman enduro rider Jemma Wilson had entered and thought, ‘I’ll do it too!’

“I saw Jem was going – and I wanted to go. I rang my step-dad and asked him what he thought my chances were. It was the Wednesday nine days before the Spanish GP and I said I want to go to the EWC! He said, in the time, I had no chance. But I had to give it a shot. So I sent a whole heap of emails. Eventually I sent an email to the manager of the Spanish Yamaha O. Pons team and he emailed back – very helpfully – and within a day he said ‘we could offer you this and that…’ A massive help, I couldn’t have done without him.

“We were off to the AORC (Australian Off Road Championship) that weekend, so we booked the flights on the Friday while driving to the races and by the Monday we were on the plane to Europe.”

Jessica’s background is not one of plenty, she’s just one plucky, hard working and very focussed young lady – much in the Australian tradition. Bikes have always been there. Her mum rode quads, her step-dad rode enduro. Her family is very modern, being a mix-up of siblings from multiple marriages. Jess has an older sister (disabled from birth – her mum is a full-time carer), and three step-siblings: two sisters and a brother. Ah yes, and there’s another sibling on her father’s side by his new wife. Jess has been little sister to all these and she values their enthusiastic support.

“Like every child, boy or girl, I had a pee wee 50 – from when I was about seven. I just rode around, my dad would push me along. From there I moved onto a KLX125, but I didn’t ride that so much so I moved on to riding quads. My mum used to ride them, she had a Banshees (Yamaha YPVS 350cc engined racer) – she was a bit crazy back in the day.

“But it was mostly a social thing.”

This all changed when her step-dad bought Jess a Yamaha YZ85 small wheel motocrosser.

“I started mini-khana. That’s a sport where you do all sorts of things over a day. You ride feet-up around witches’ hats (traffic cones), ride a motocross track with four riders at a time, there’s a slow race in a straight line. It’s just learning skills. So I started that when I was 13 (we’re only talking 2005!) and I did that for a year, it taught me clutch control and a lot of stuff. I didn’t do bad, but I found I really enjoyed the motocross test so my parents backed me to ride local motocross for a year.”

Jess was at the same time dancing hip-hop, jazz and tap at state level (how many enduro riders do you know who can claim that?) but with family funds stretched she gave this up.

“I was always going to choose the bikes – I love the adrenaline rush!”

And so finally came enduro – although in the form of sprints and cross-countries.

“I was doing state titles and then nationals with the motocross, and it was in the last year of juniors that I tried enduro. My step dad knew Geoff Ballard (no introduction needed – legend of Australian enduro) from his own racing so with GB watching over I tried some state level enduro and didn’t do so bad.

“Following that GB made me an offer to join his team and I jumped at the opportunity. I was 16, it was my first year in seniors, my first year of full enduro. I was given a WR250F and I made a clean sweep, I won everything! The nationals, the A4DE, I won them all!”

Three seasons later, having won everything repeatedly, it stands to reason Jess should look to the EWC to find new challenges. 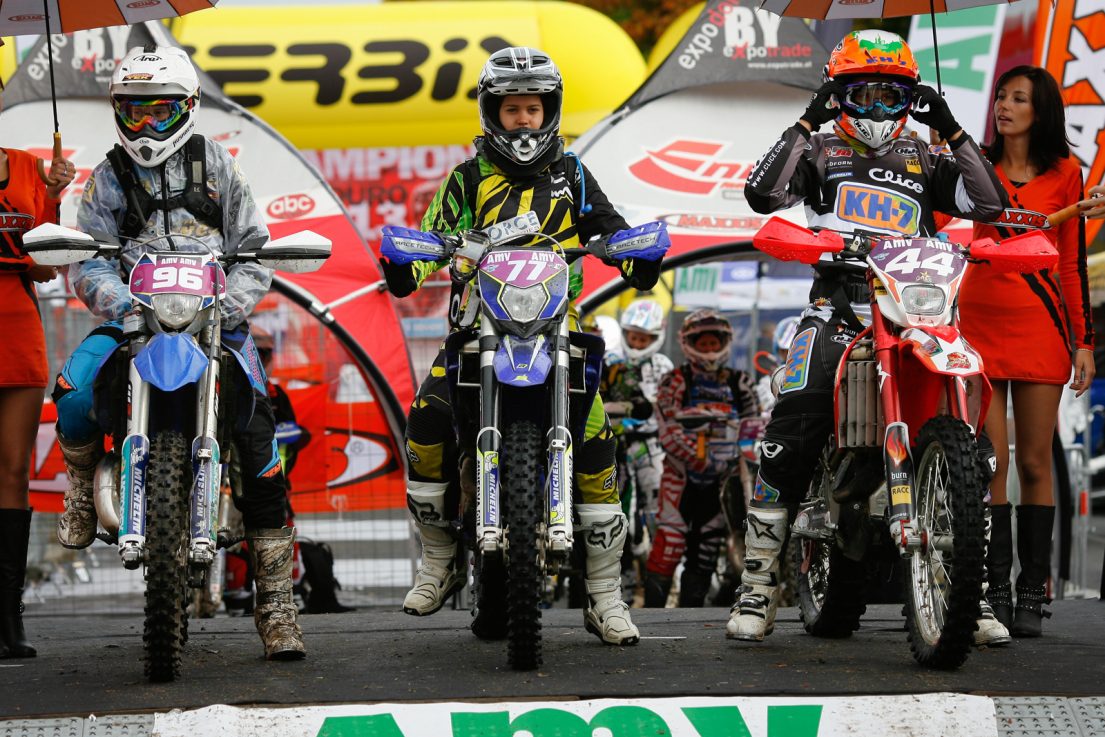 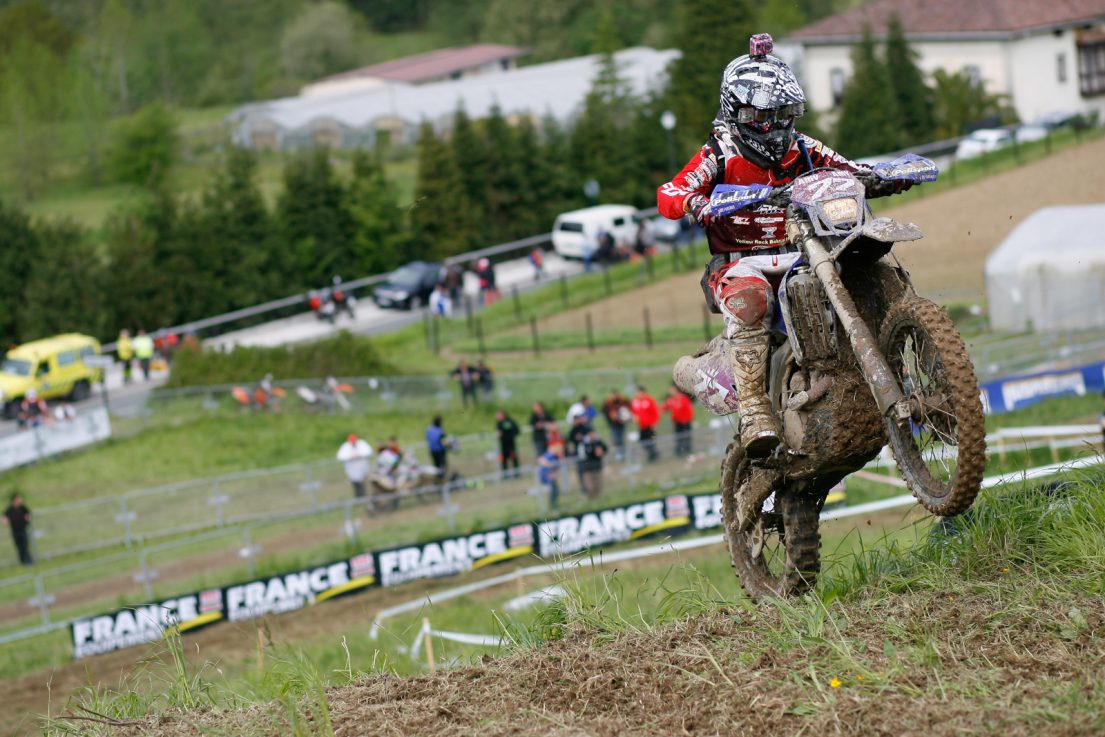 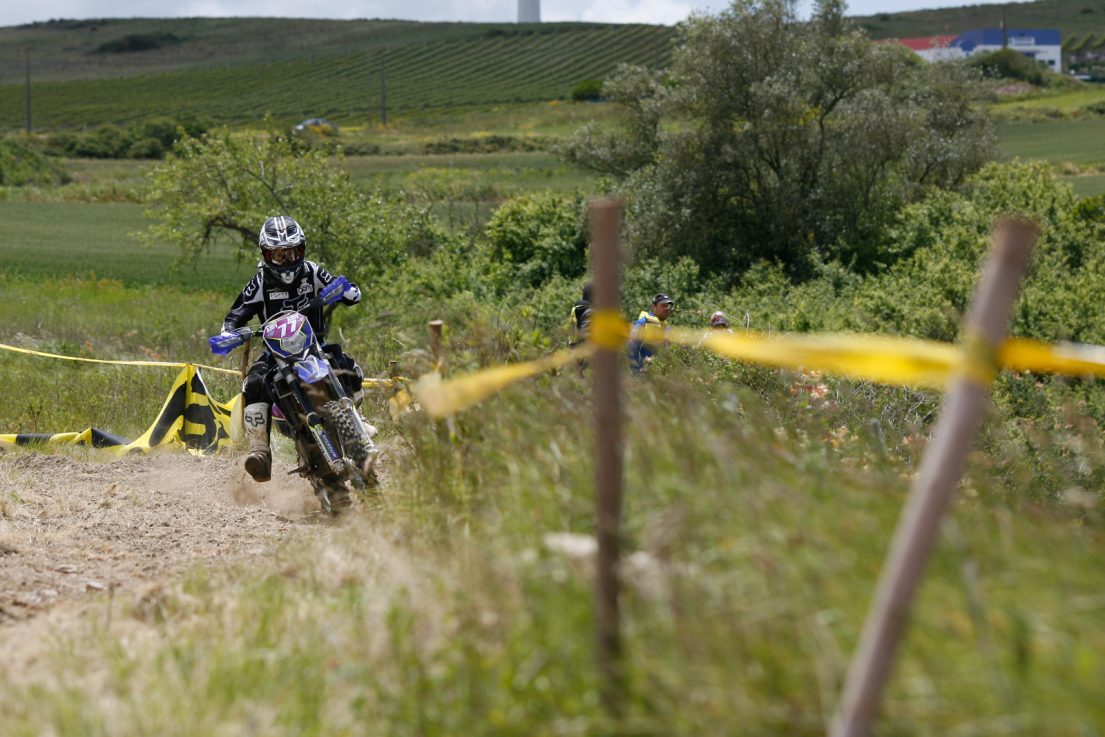 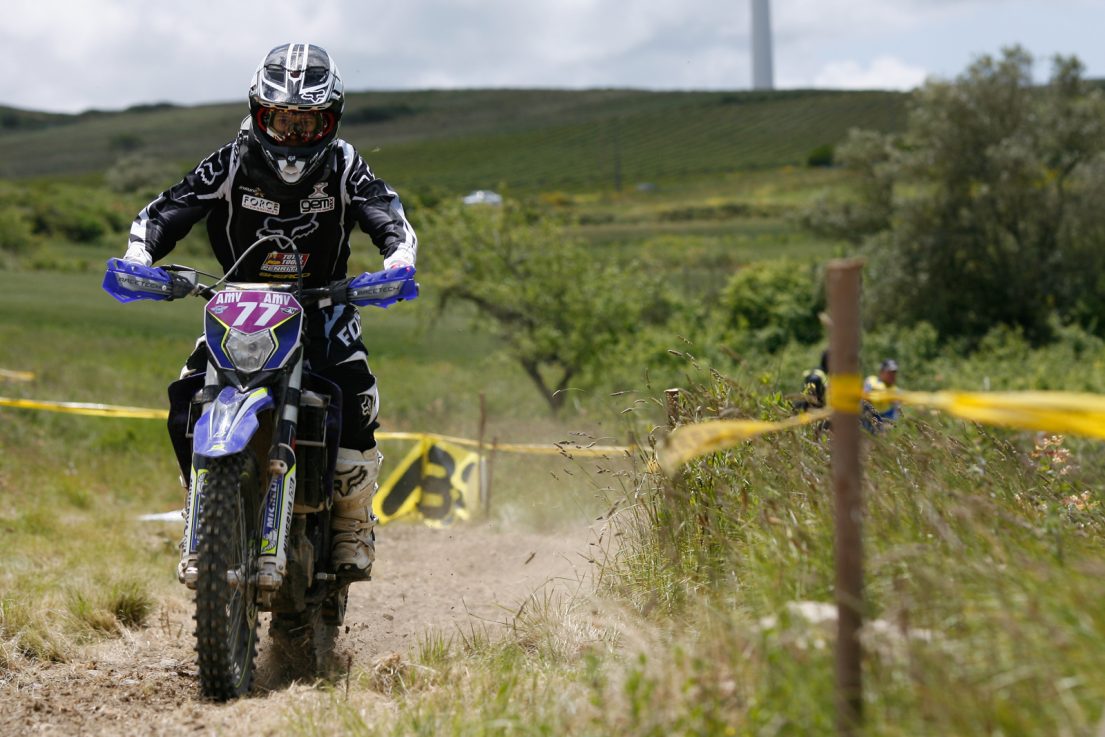 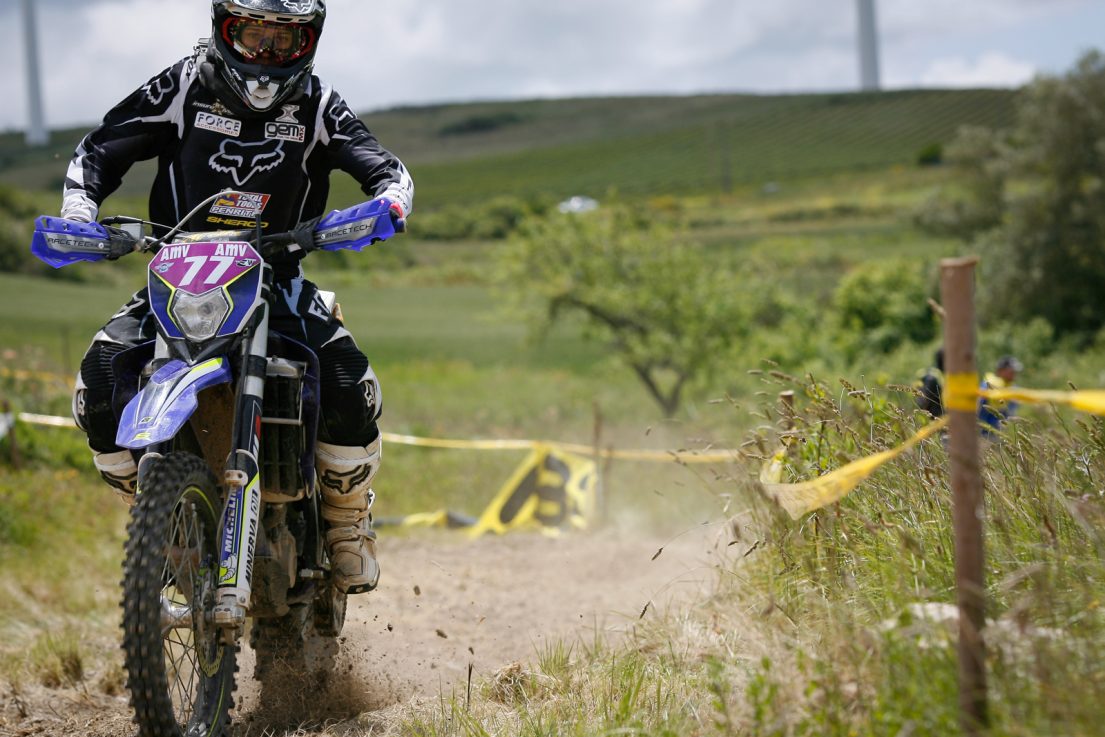 With Yamaha not so active in European enduro a change of team was always on the cards for 2013 and so with the help of Sherco Australia Jess swapped to Sherco 300i power for 2014 and took up a place in the EWC works team. After a first season in EWC – her best place was a podium third at the final round in France – she also knew what she had to work on to make a strong return.

That didn’t work out. As we know near biblical amounts of rainfall hit the Central Massif that weekend – making for super-testing conditions. All of which played into the hands of her key rival, our very own Jane Daniels. Jane took a momentous double win – nailing a hat on world champion Laia Sanz and it would seem creating all manner of headaches for the organisers too (long story) – and with a maximum points haul Jane stole the championship runner-up from Jess, at the last gasp

“Yeah, although it was fairly disappointing I’ve never really trained in those conditions and even for the men it was difficult that weekend, so many DNFd. We pushed and pulled the bikes all day, the other girls too, so it was a bit of bad luck. But only two girls finished (there’s confusion here: the FIM say three – paddock witnesses say one!). The championship’s made up of many days and while I’d had many good days these two days were Jane’s conditions, this is where Jane shines and for me, she really deserves this.

“Also, I’d sooner go out of the weekend with disappointment as this is good for off-season training – then you’re motivated, you’ll push yourself. Instead of thinking, yeah, I came second; having that defeat I know I need to train, to push, to catch other girls. Laia hadn’t been beaten until that weekend and Jane’s proved it’s not impossible and that’s motivation too.” 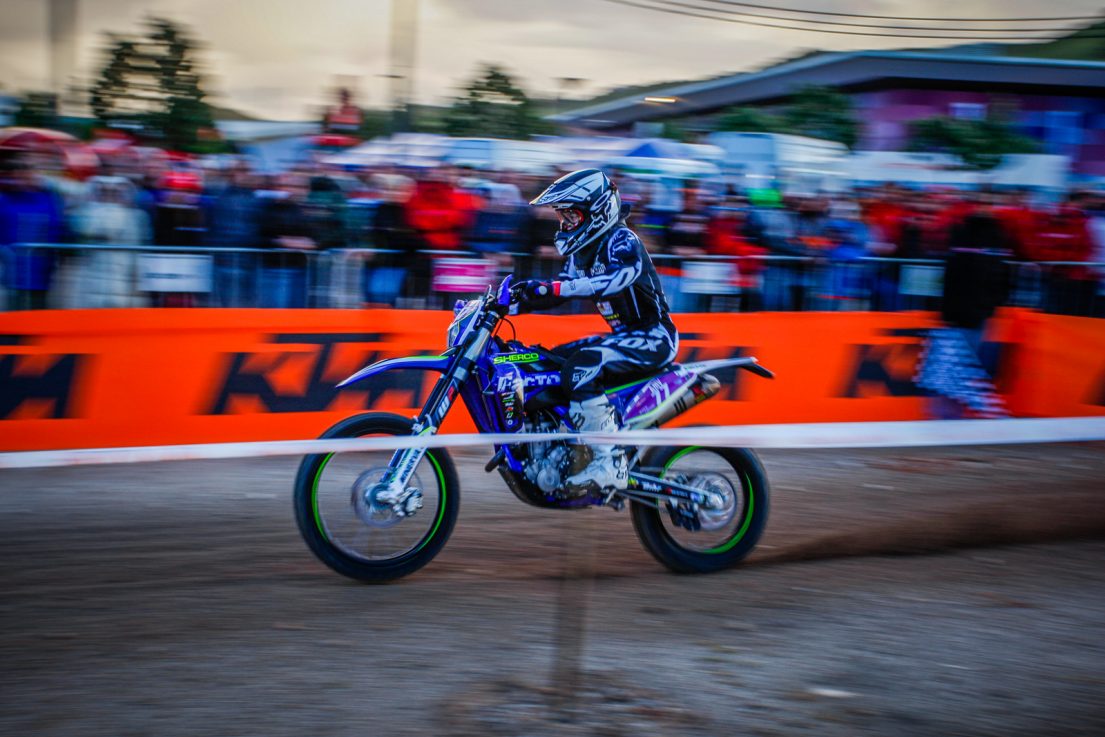 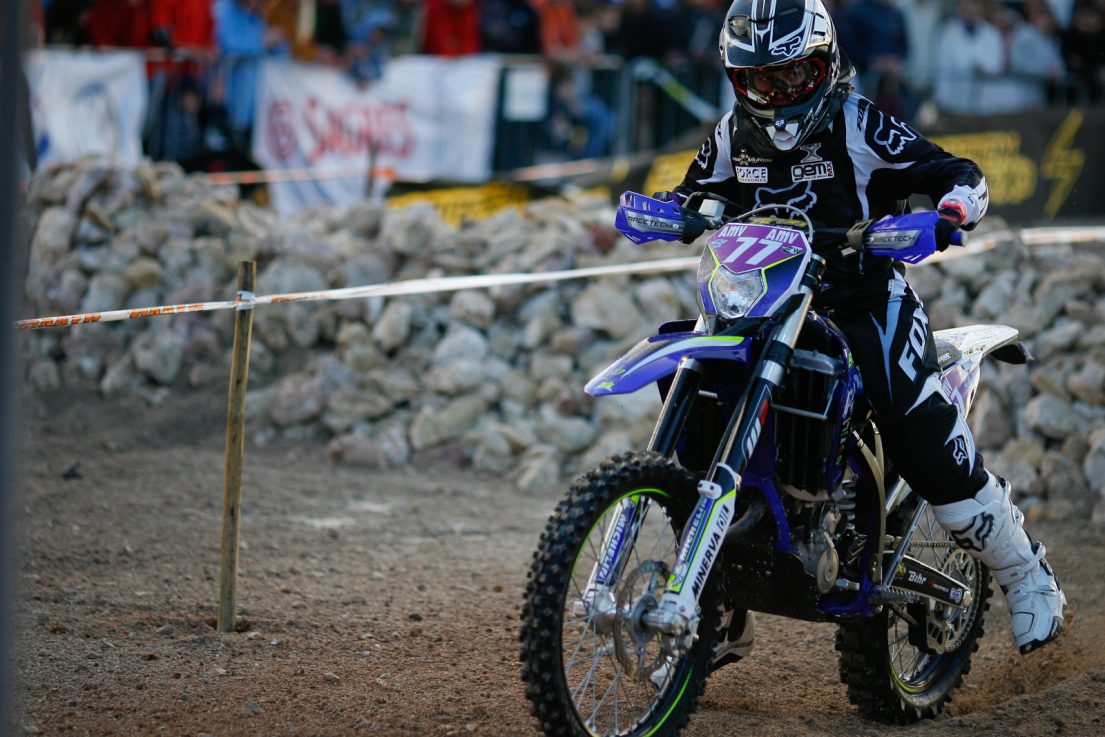 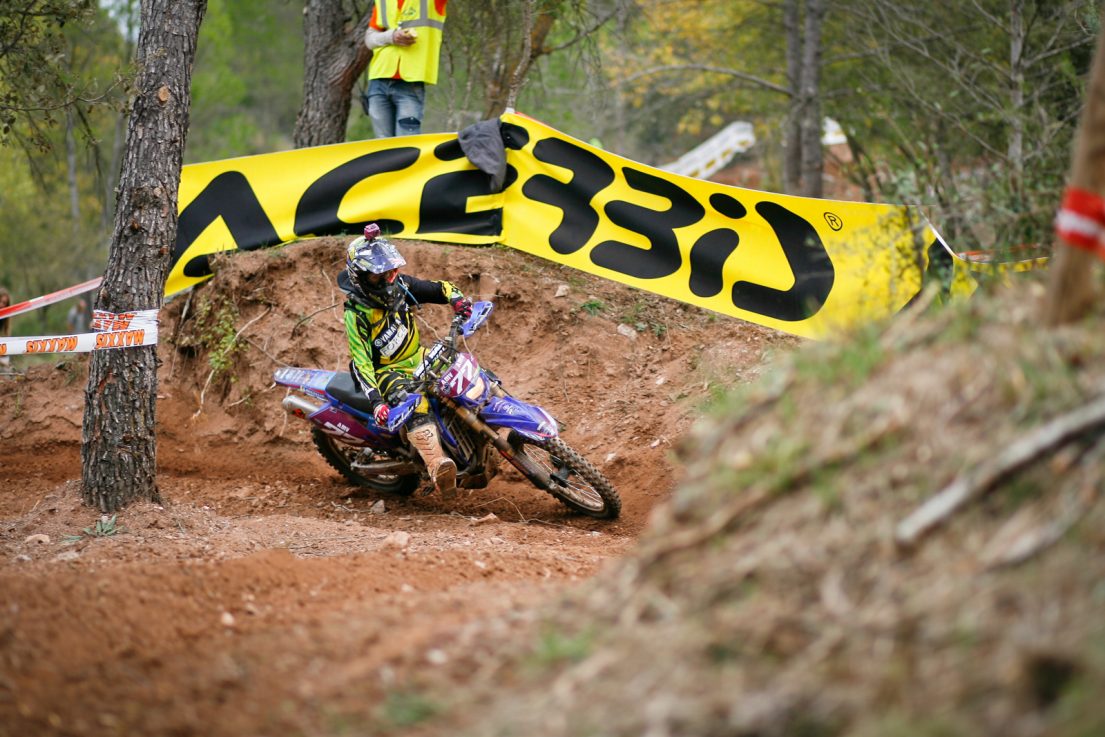 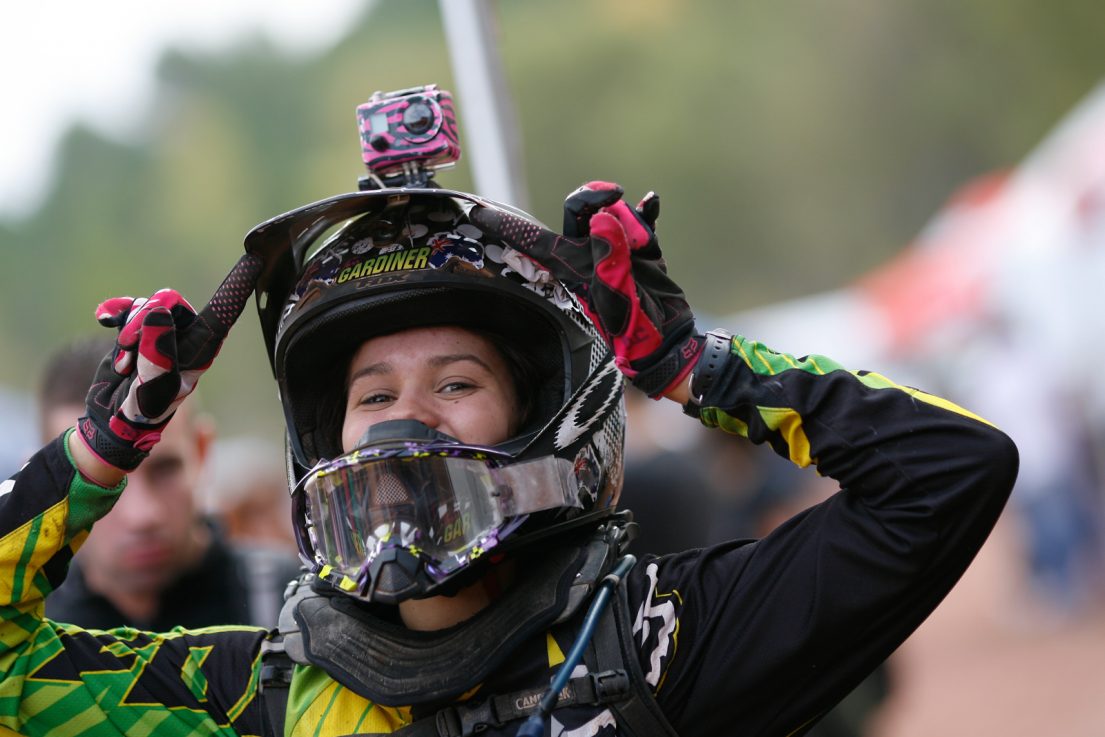 So, for Jess, with the last job of the ISDE sorted – and how, with no Sanz or Daniels she won the Women’s class outright – it’s back to Australia and the day job: as a dump truck driver!

“Okay, yes, it’s not the usual girl’s job. But my step-dad works for the same company and my boss is the president of the local motocross club – so it all came together. It’s easy to fit around my racing and makes me good money with no qualifications! The big boss is fully supportive too, he’s like a sponsor.

“And it’s not stressful, it gives me time to think over what I need to do next. I’m sitting there, driving around, but my mind’s on the racing!”

We think Jess is being a bit light on the truth there. This is no Bob the Builder brick carrier we’re talking, Jess’s Caterpillar is a full 500hp 42-tonne carrying six-wheel monster, with tyres higher than Jess stands. When she’s home working she’s pulling 12 hour days five days a week. Get to love that about Jess, she works hard but she doesn’t big it up – typically the opposite.

It’s been a great year for Jess. The championship might not reflect that, but the individual results do. As she points out, runner-ups were the order of the day this year, and that’s a fair step up from last season. So too is claiming the top woman position at the ISDE. Six long days is still six long days whether you’re man, woman, trophy or clubman. It takes some doing to arrive at the far end as top performer. And given the chastening experience at the French GP we can expect Jess to again be working real hard over the off-season. Heck, she’s even looking into coming to the UK to ride a few extreme races. There is no team ride in place at this time, but it’s most likely we’ll see Jess faster and stronger – and more technically skilled – than ever come the 2014 EWC season.

And so that’s Jessica Gardiner: EWC racer, ISDE champion – and dump truck driver. Still only 20 years old, only four seasons into her senior career. Mini-khana to ISDE champ in six seasons, she certainly lives by her motto – ‘become the dream’. And given her open attitude and desire to push on there really is every chance we’ll see her here in the UK (her Dad’s British so this could happen quicker than you might think). Yep, looks like the Women’s world crown is going to be a tough Spain versus GB versus Australia battle in 2014… 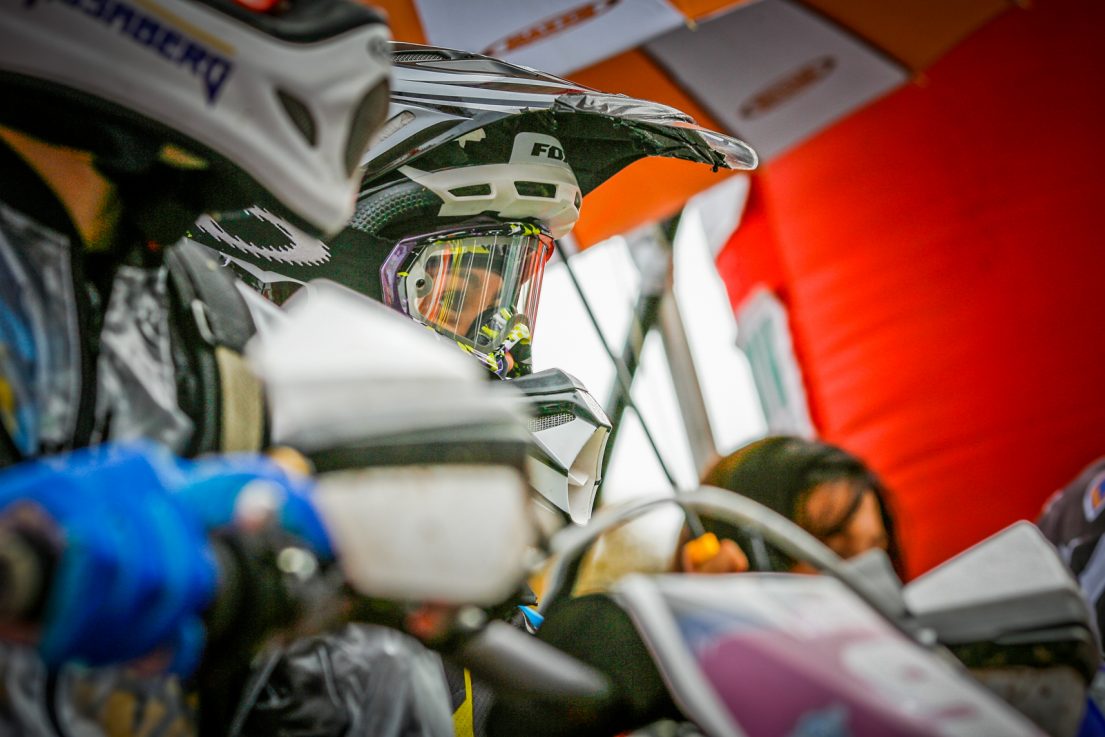 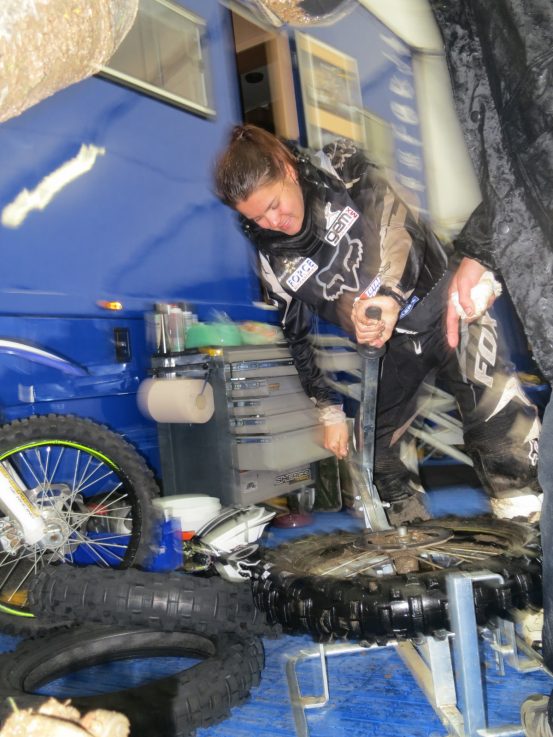 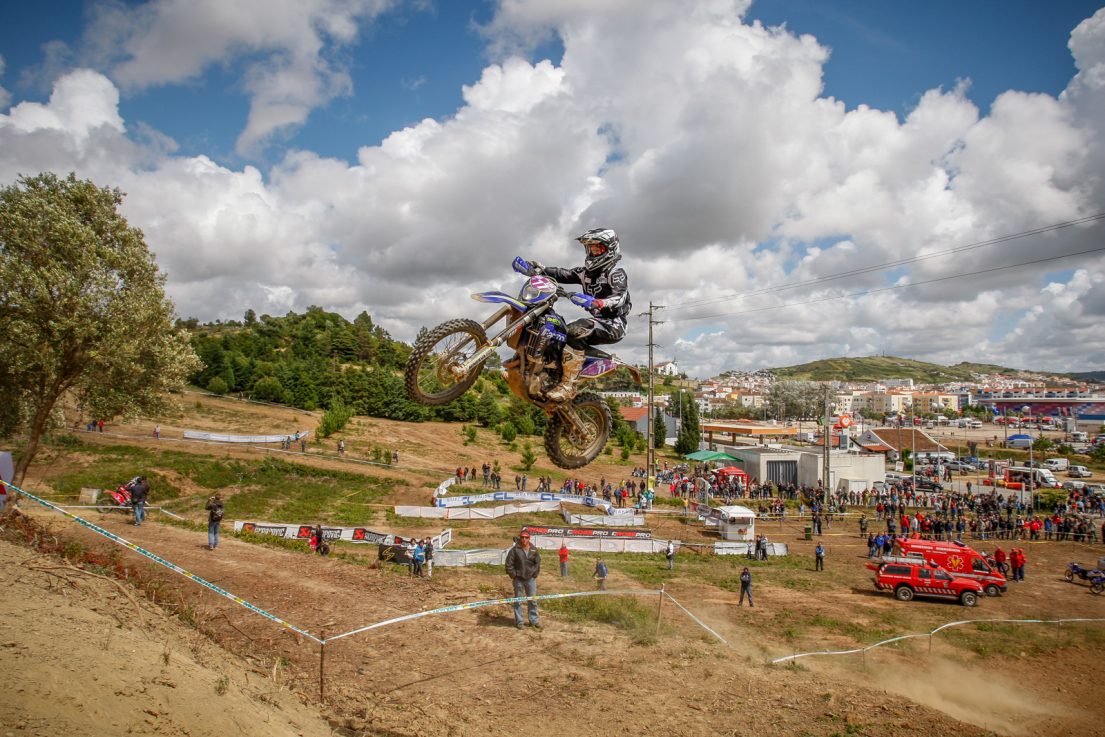 2020 update: Since this interview Jess has continued with her international racing, to considerable success. She led the Australian Women’s Team to ISDE victory in 2013, ’14, ’15, ’16, ’17 and ’18. She won the women’s enduro championship of France in 2017, And in the four years she’s competed in the women’s world championship of enduro she’s placed third twice, fourth and sixth.

IN CONVERSATION WITH… EMMA BRISTOW 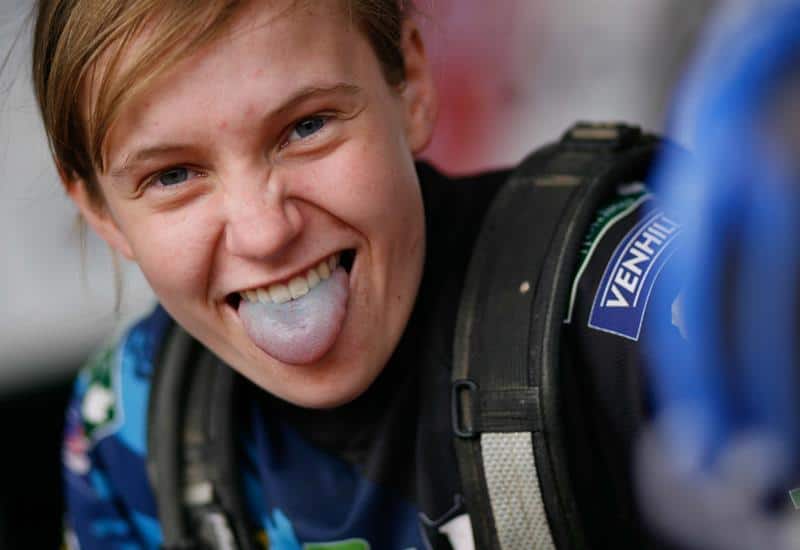