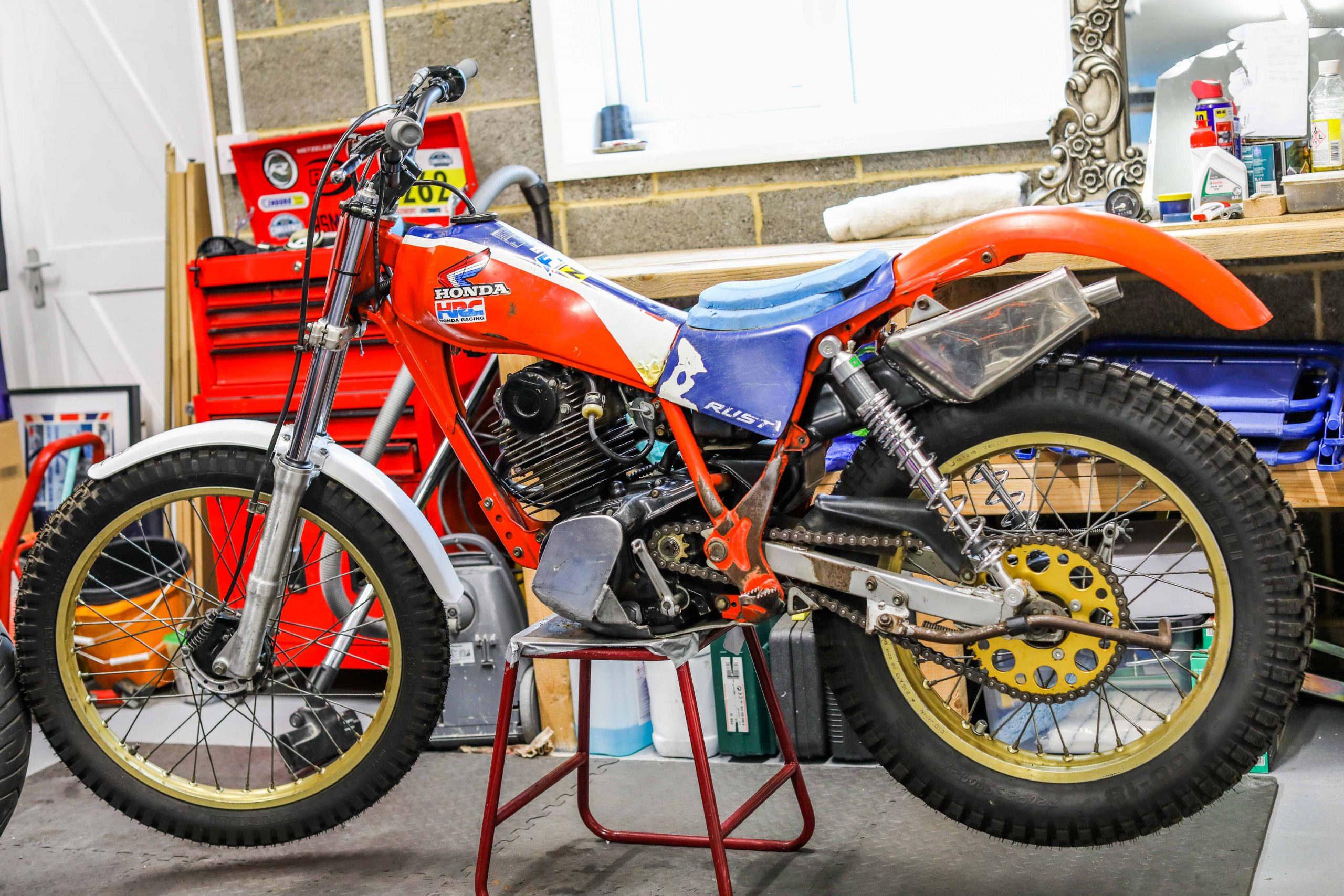 Since my last blog, ‘Lockdown Life #1’, it’s been a trying, but ultimately rewarding few weeks in the garage. It seems working on 35-year-old motorcycles needs a little more patience than working on new ones.

First point of order – the steering head bearings. Actually, the old bearings came out pretty well. It was fitting the new ones that was the problem. You see, the bearings were a generic set, made to fit multiple Hondas including those old ATC trike things. And in the nature of one-size fits all, they fit in a fashion, not in the way you’d immediately like. So there was an issue with fit and with gapping. After overcoming the initial fitting issue (the bottom race for the top bearing sits high) it was a matter of juggling spacers so that everything fitted without either the top or bottom clamp rested on the head stock. Patience and careful measuring finally got it settled. And talking of patience, I’m talking the kind where you have to walk away, maybe take a break for a night or two, check in with some mates to see what they think, then come back in a totally karmic state.

Those bearings were just the warm-up act. The fork seals were the main event. I don’t know how old these ones were, quite possibly they were the originals, but boy oh boy, they did not want to come out.

Releasing all the fork bolts went well, top bolt (cap) and bottom bolt came loose with minimal effort. Then when I tipped the tubes to drain the oil, as expected there was probably no more than 50cc in either leg and even that was a turgid light brown sludge, so probably 50% water. Remarkably nothing was corroded.

The seals then. They didn’t come out with a simple levering as the workshop manual suggested. Heavy duty levering, despite copious rags, just made for dinks in the soft alloy of the fork tube. So stop that. Instead, heat. Lots of heat. Still no budge, just burnt hands where the rags would slip, the lever slip and the palm slaps down on the super-heated metal. So, after much Internet checking for suggestions, phone calls for advice, and some meditative chants later (we’re talking over a week) and we’re at the last chance saloon. Out with the drill – nasty but necessary – and just blitz the things into smithereens, while being uber-careful to not let the drill bit slip and stuff up the bush that’s immediately beneath the seal. Yep, brute force, and a little precision, worked. So the first seal took a week’s concerted campaign, the second – now having the answer – just ten minutes.

Once the seals were out it was a simple matter of cleaning everything up as meticulously as I could, including super-fine wet & dry on the few nicks in the stanchions. It was interesting to see how basic the forks were, though. Frankly we’re just talking springs and oil, there’s no valving as we know it.

So re-assembly was thankfully straight forward – just adding a couple of spacers into the fork tops for additional preload (+20mm – so scientific!) to account for my excess girth. And so far the oil has not seeped past the seals, despite plenty of pumps. Fingers crossed. And that said, my god, what action they offer. If there’s any damping (compression or rebound), well, I’m not seeing it!

So the good news is, slightly porous fuel tank excepting (a tank liner needed here probably), the TLR is ready again to trial. Refreshed suspension, new exhaust, new steering head bearings. It’s ready enough. And that trial may come as soon as July if the lockdown easing goes to plan. Oh, and if my knee rehabilitation works out. You see I’ve seen a trial set for mid-July, and that gives me six weeks to work overtime on the exercises to get max strength into the knee, so even if the ligaments aren’t super I should be semi-good – bit like the bike. And where the ligaments are absent, well, I have knee braces…