AUGUST 2016: First off, you’re going to need to be patient. This project is a long-term thing. Life is busy and fitting in things like garage time, let alone weekends on the bike, is getting tougher with each passing year, what with work and family commitments and all. Secondly, I’m more writer than mechanic, so that slows things, too. But having said that, I’m a born optimist. These things can happen.

So what we have here is a 1985 Honda TLR250. I picked it up around about 1999, bought from a pal, Hump, when I used to live in NZ. It looked then exactly as it looks now. I used it to ride around my garden and driveway there. I had plans to do more with it but left the country before I could get any more involved. The poor TLR then sat in a garage for 13 years before just months ago getting crated and shipped here to the UK for a tearful reunion.

I’ve kept it all these years because it’s a beautiful wee thing (no really) and is from exactly the era when I briefly rode trials. I had a Fantic 200 back then, but thought the TLR200 that was then brand new to the market looked ‘the nuts’. I would probably have bought one (or the 250 that followed), if I could have stumped the cash, only I got bored with trials after just two seasons and ended up road racing instead. Of course it helped that I was just a bit rubbish at trials, so I wasn’t exactly being compelled to stick with it.

WHAT’S TO BE DONE… 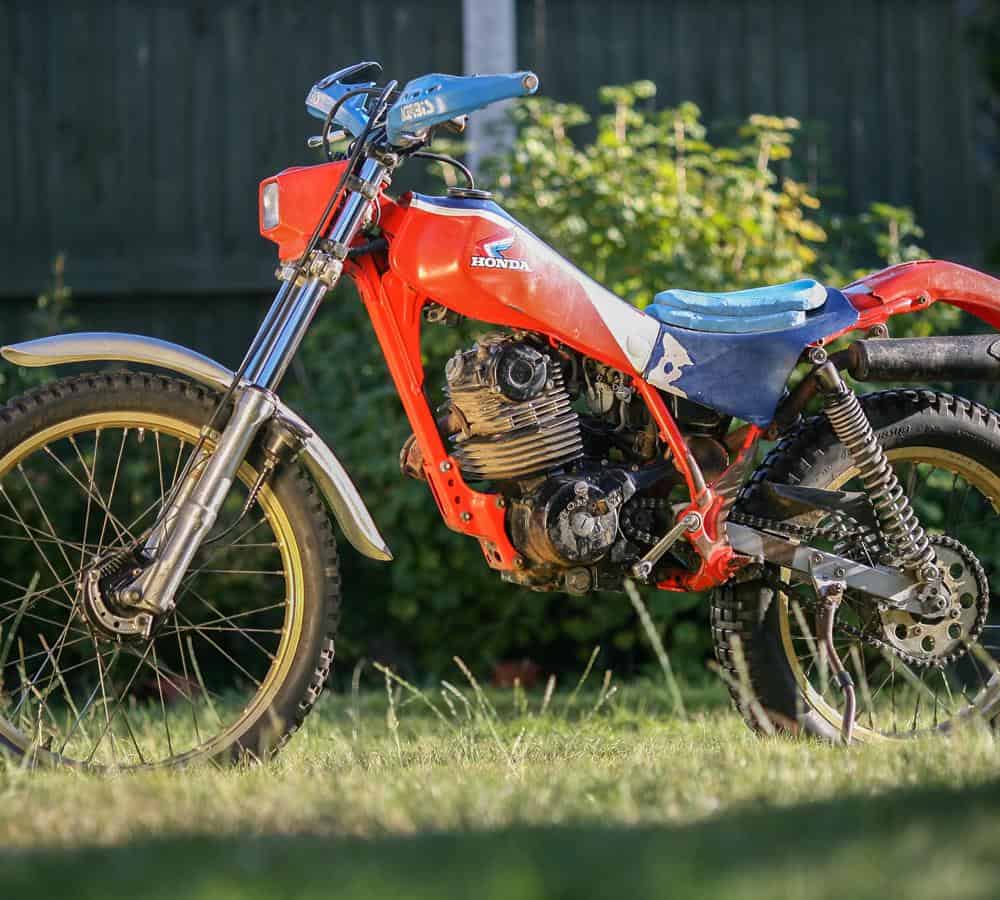 This is the TLR’s glamour shot, taken from her better side. She looks tasty from here. By the way there is a sump guard, it’s been taken off as I did a quick oil change in the process of starting the bike after 13 years lying dormant. Started fourth kick! 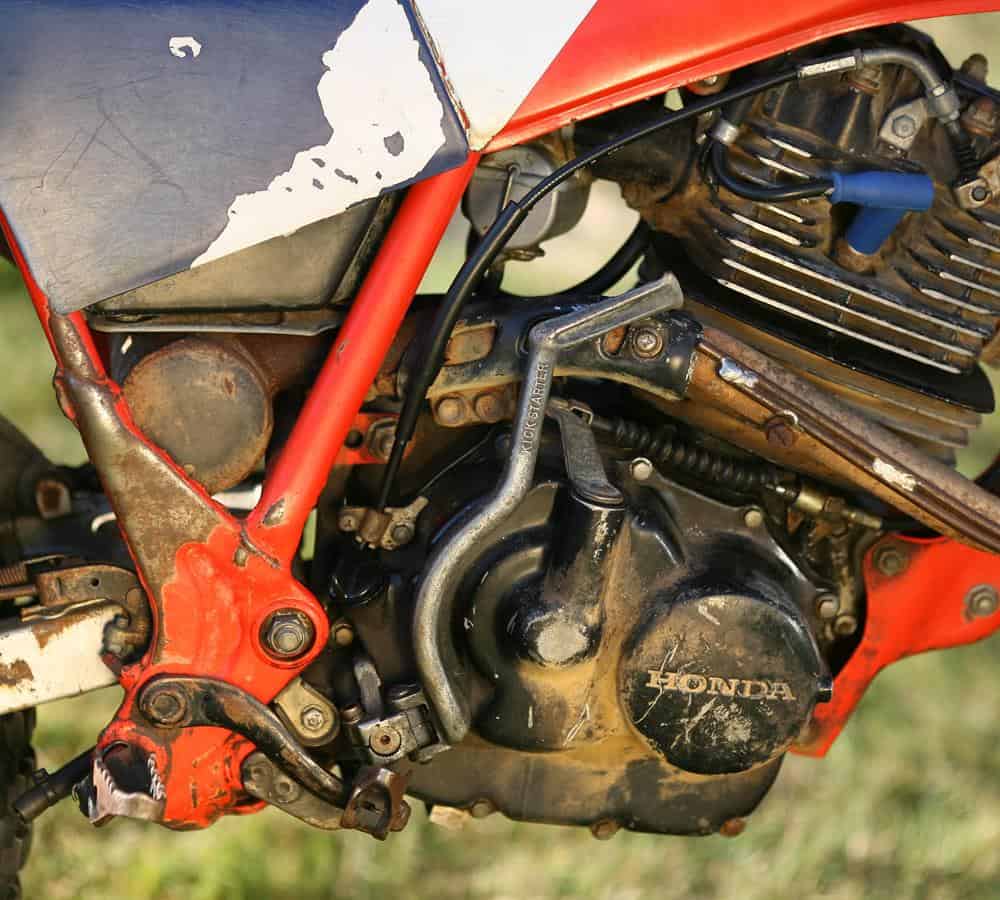 This shot tells the real story. It’s taking ‘patina’ to the limit of its meaning. Probably going to have to get the frame shot blasted and powdercoated fairly soon. 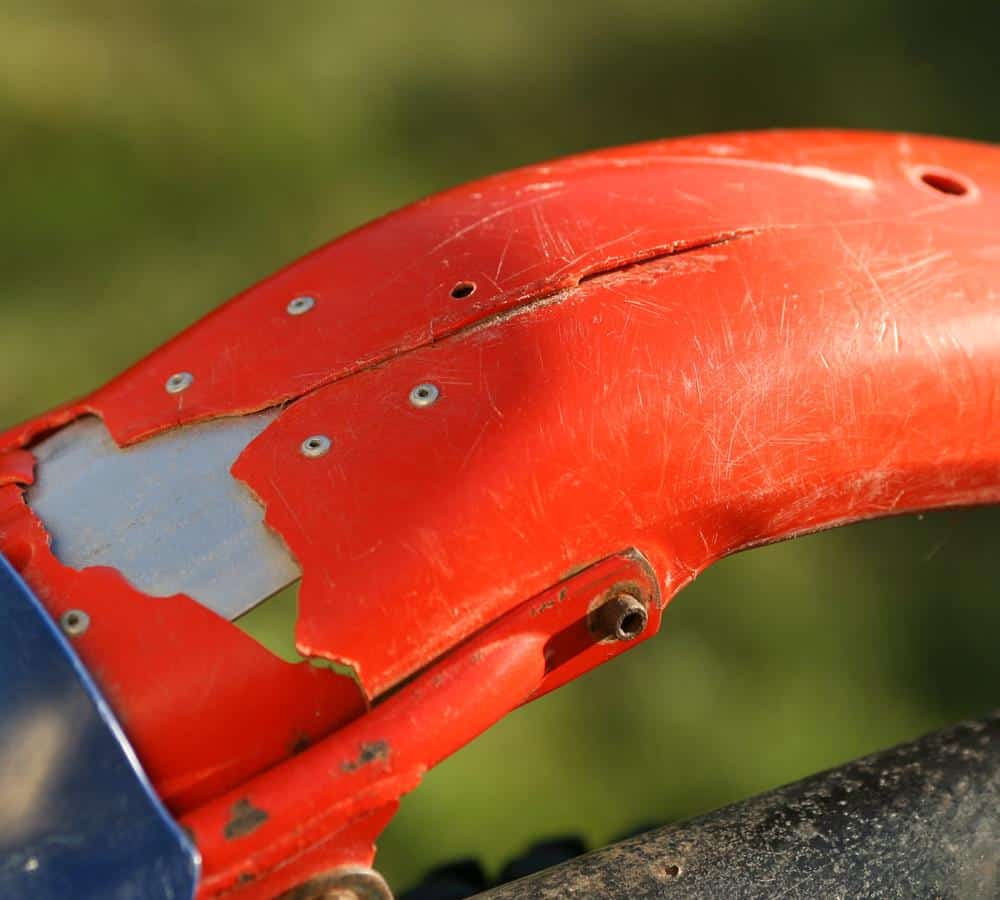 That’s the original mudguard as if you couldn’t guess. Unblemished, that would be £100 on eBay. I think there’s a certain charm to the riveted alloy plate repair. Not sure if the exhaust is original, I suspect not, but a wire brush and some BBQ paint should have it looking factory smart (no?!). 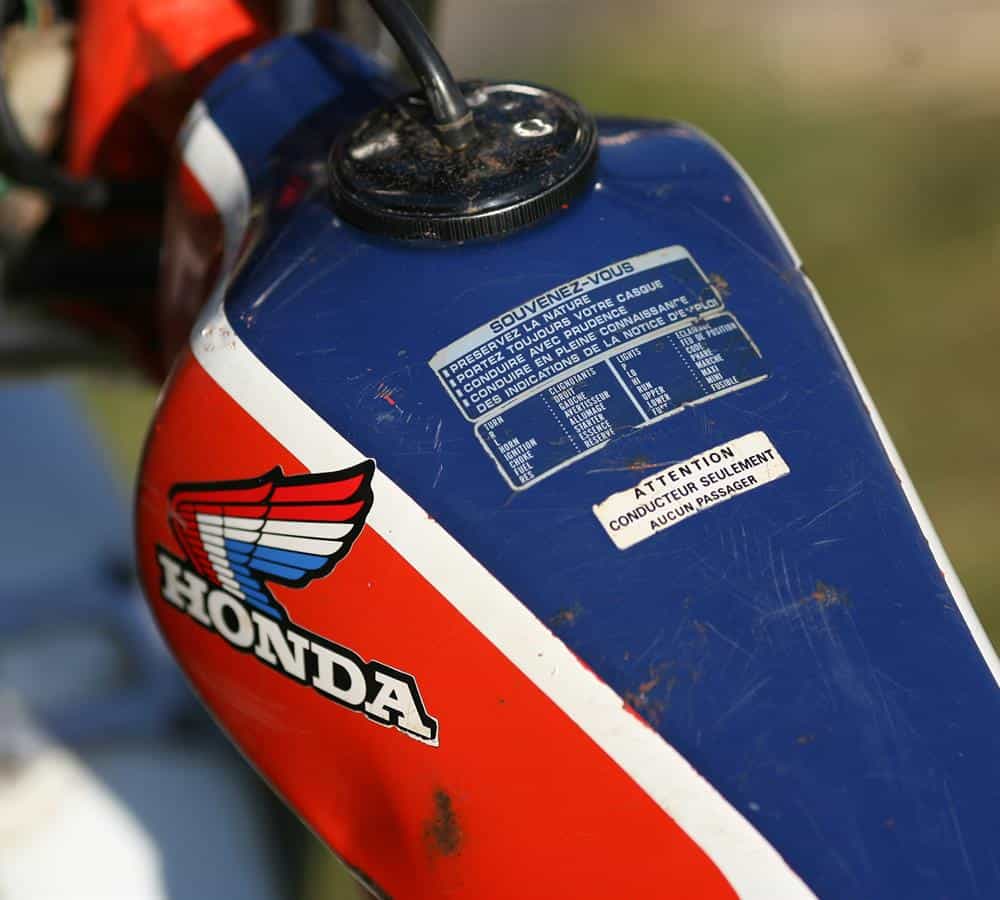 Like many vehicles in NZ, the TLR looks to have lived a previous life somewhere else on the planet, either in France or a French colony. So it’s travelled the world. The tank is sound, just looks a mess. 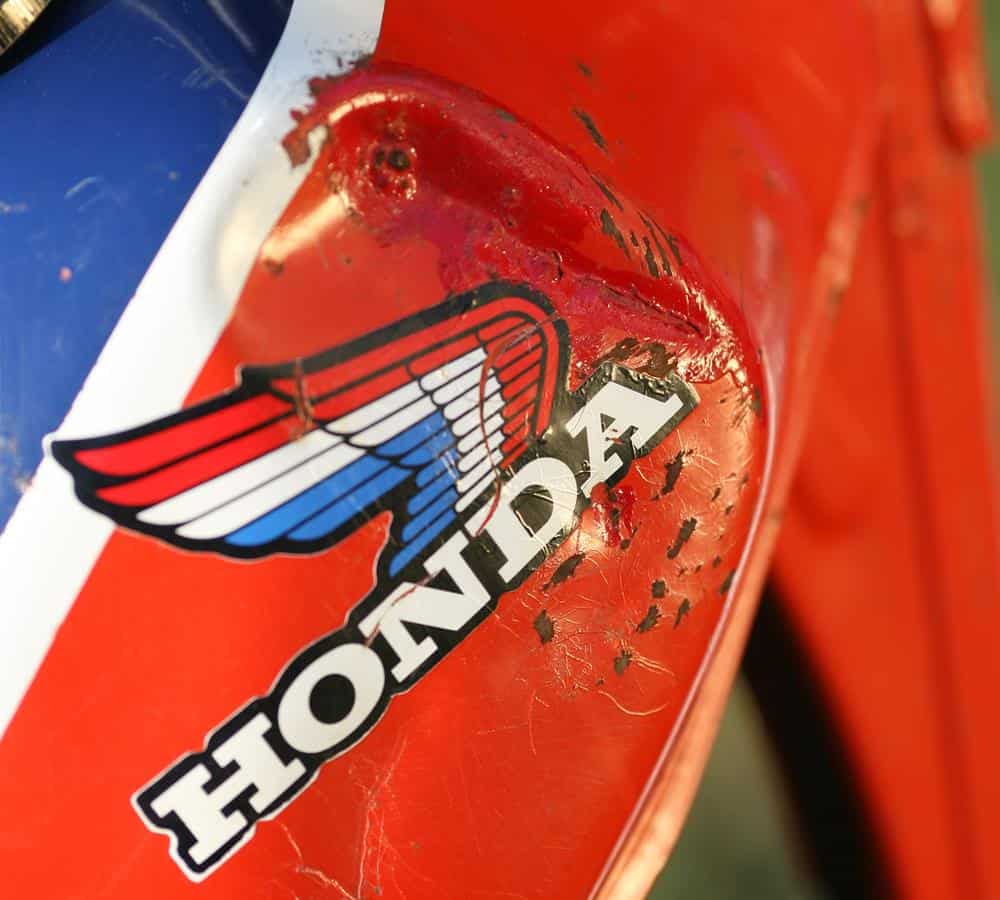 Okay, yeah, not so pretty. A six-inch brush and Humbrol paint do make not an invisible repair, but this is what went on back when twinshocks had no value. 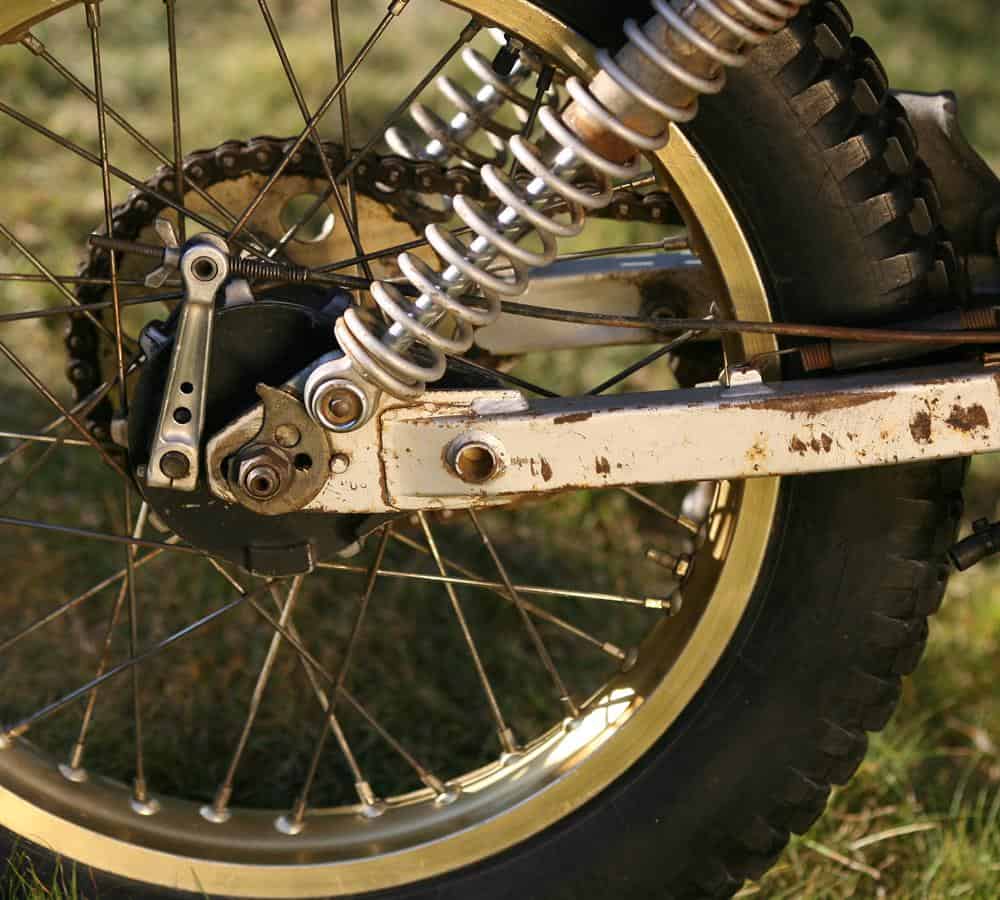 The wheels are looking good, the rims are sound and metal polish has shown the spokes are solid and they’ll get their shine back, maybe not their sparkle though. I love the hubs with straight-pull spokes, that was factory stuff back in the 1980s. 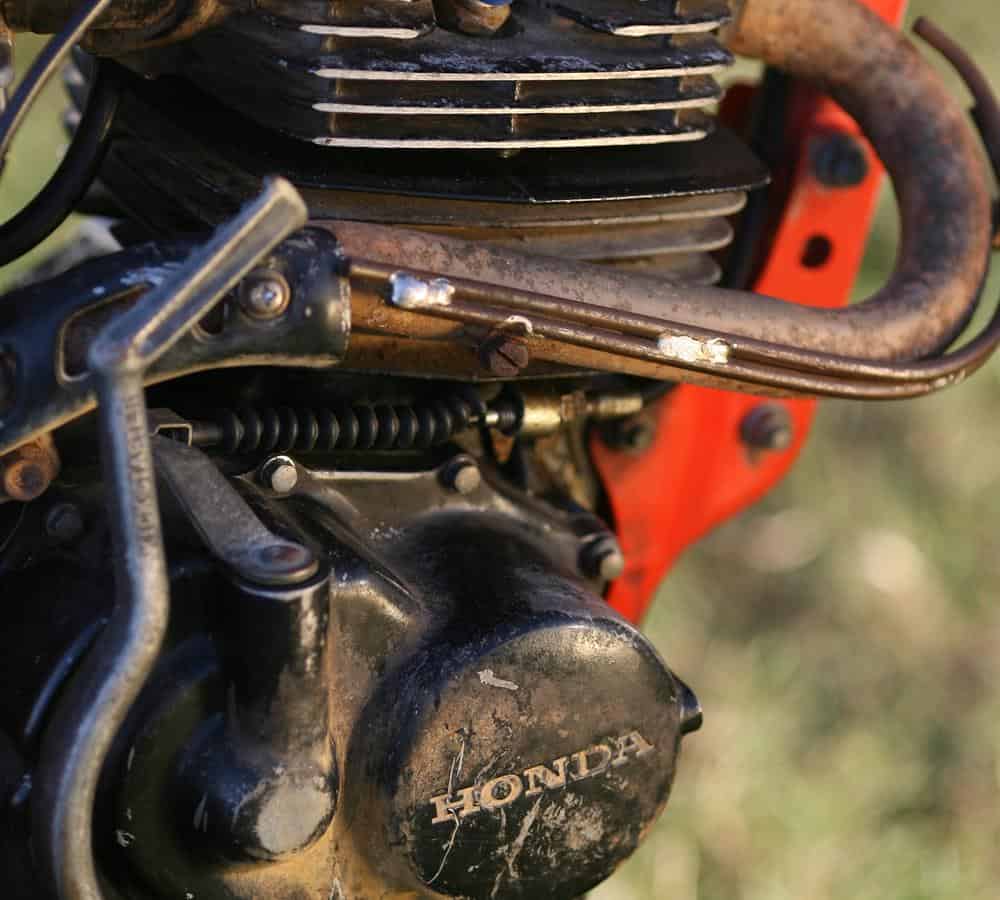 As said, the engine runs okay, smoke-free and fairly quiet, although the carb leaks. Dirt that’s 20 years old has resisted neat petrol as a first cleaning agent – I’ll have to find something stronger. My guess is the header pipe protector does not carry an HRC catalogue number…

Let’s get it running properly. Sort the leaking carb, fit new brake shoes, new chain and sprockets, might at a push fit new fork seals and turn a blind eye to the shocks… Oh, and fit some non-perished tyres, of course, with tubes. 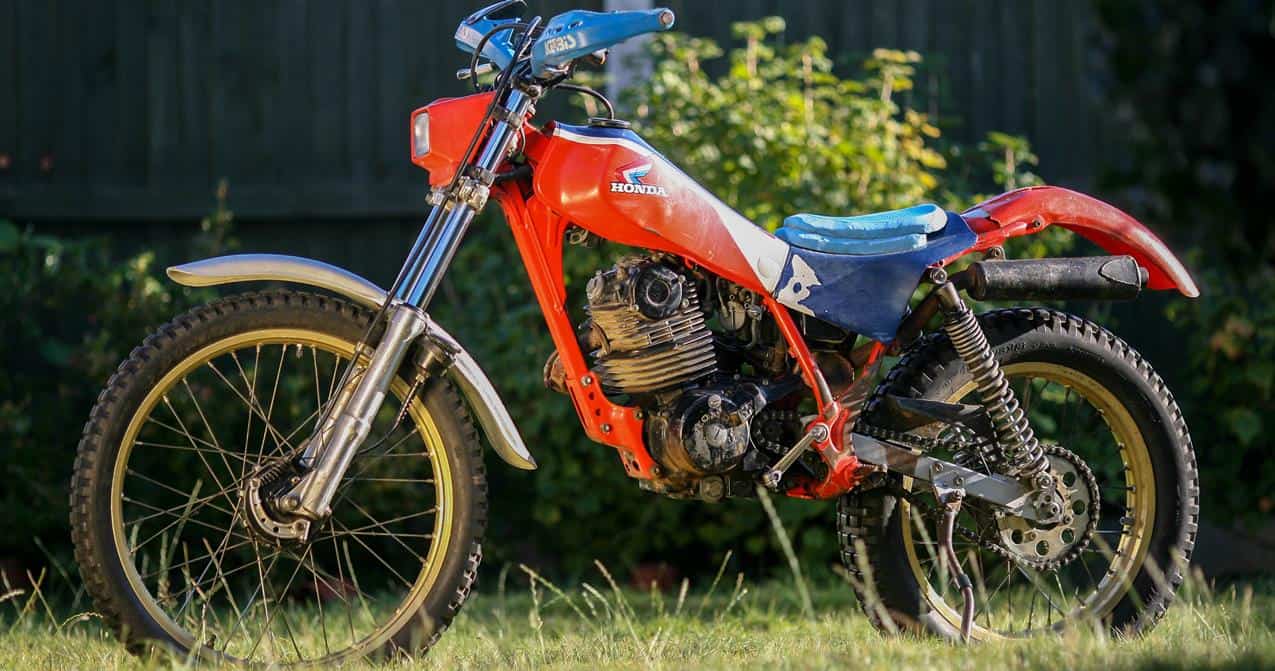