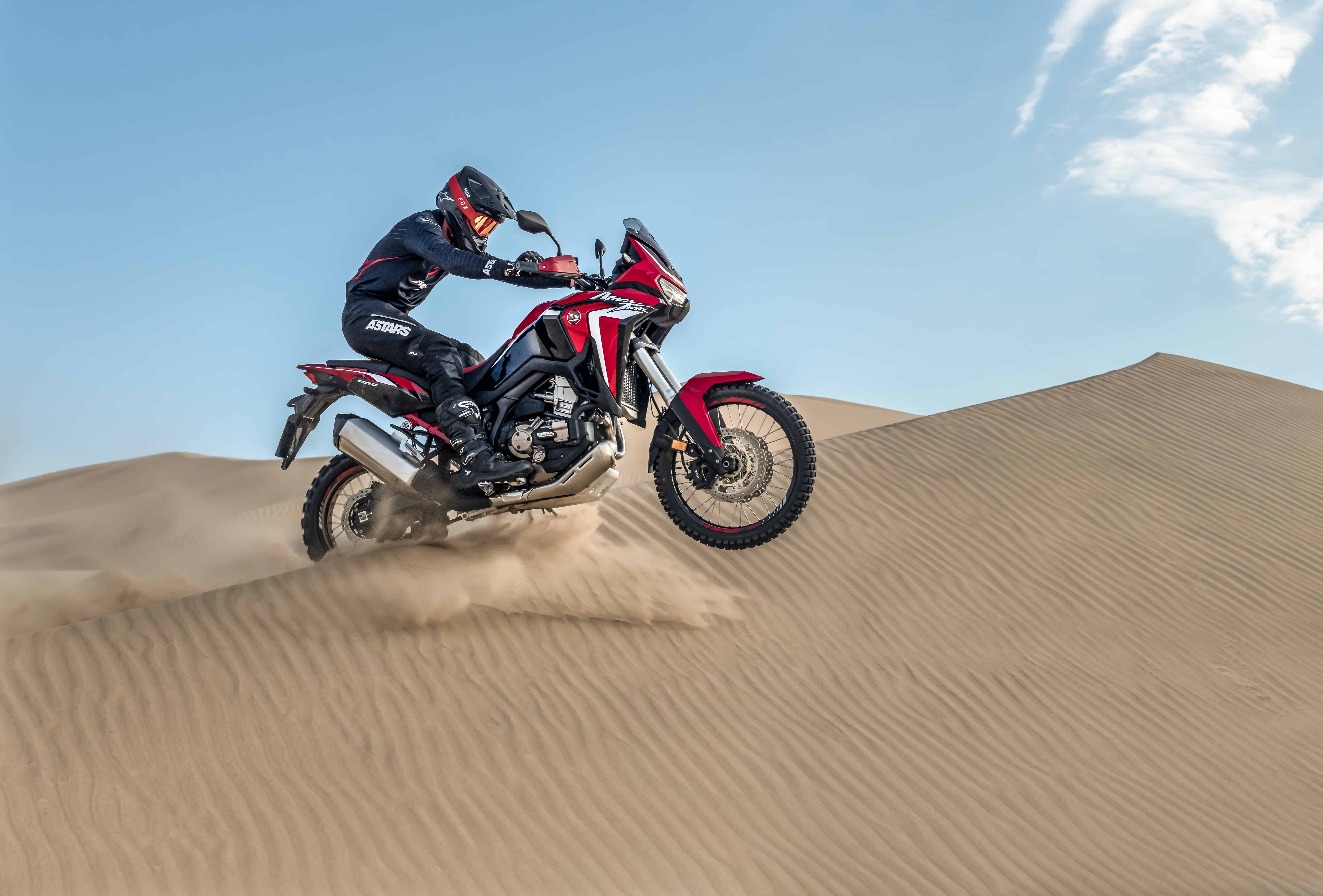 THE AFRICA TWIN AND THE KITCHEN SINK

Honda’s Africa Twin made a big comeback in 2016, as the CRF1000L. Lots of people got excited and many many have since put money down and bought one, over 87,000 say Honda.

Honda carefully placed the model somewhere midway between the 800 and 1200cc adventure segments. It came with a few trick bits, options like DCT (dual clutch transmission – effectively an automatic gearbox) but the formula was essentially simple, a twin-cylinder 1000, making just under 100hp that was very easy on the eye. It lacked some of the bells and whistles found on some competitors, from say BMW and KTM, but worldwide Honda has a reputation for great build quality and rock-solid reliability – and the market responds to that.

For 2019 Honda brought us the Adventure Sports variant, a supersized AT, with big tank and long suspension and with an (historic) HRC-inspired colourway that was even easier on the eye. Sales have been good, but they still haven’t (yet?) reached the levels of the market leader, BMW. Good old BMW and their GSs still reign supreme, sales on GSs passed 500,000 as long ago as 2007, so they must be around the million mark by now (no doubt we’ll be told when this landmark is attained). As an example of the GS’s market strength, UK sales figures show that in 2017 some 4300 GSs were sold compared to 2365 ATs (both of which, incidentally, dwarfed UK superbike sales, where the individual 1000cc race-reps were lucky to even approach the 1000 sales a year mark). Adventure is the new king of the bike market, for sure.

So for 2020, with Euro 5 looming, Honda has vastly revamped the Africa Twin. The capacity has been boosted, but more significantly so has the tech. After four years of keeping the AT fairly basic Honda is now following BMW’s lead and giving the rider every imaginable aid, they’re throwing the proverbial kitchen sink at it. So for 2020 the Africa Twin is coming up through the ranks – more powerful, more sophisticated – and arguably coming ever closer to being a competitor to BMW’s mighty R 1250 GS.

So let’s take a look at what’s changing. 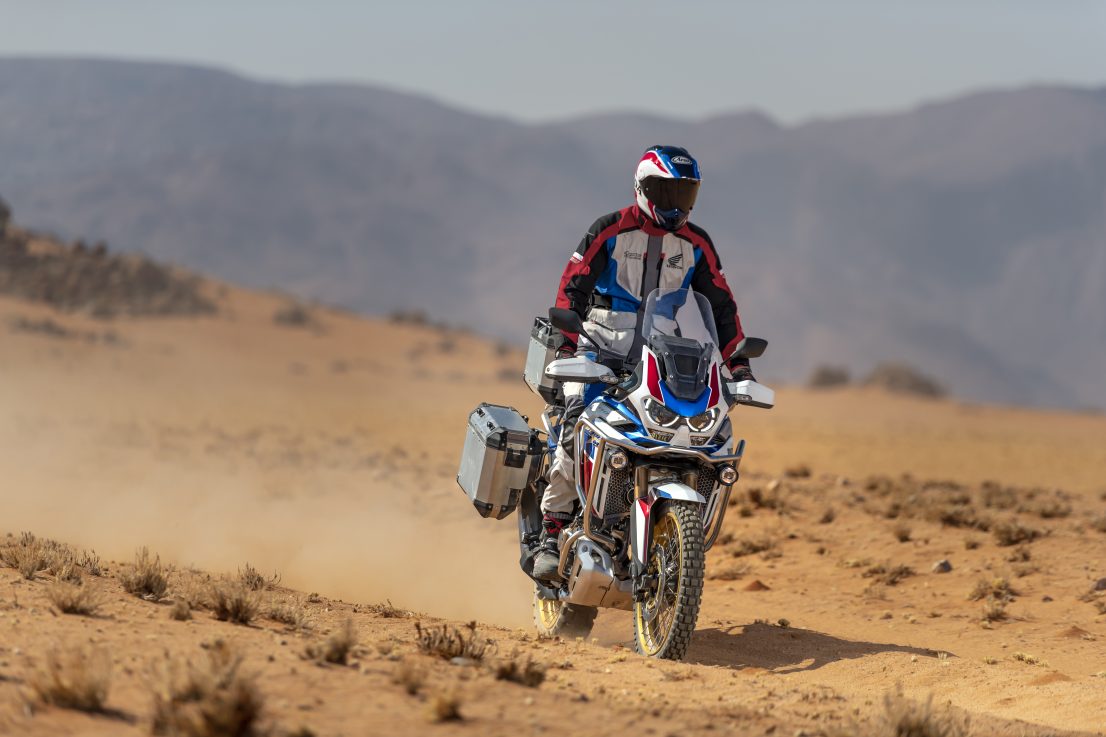 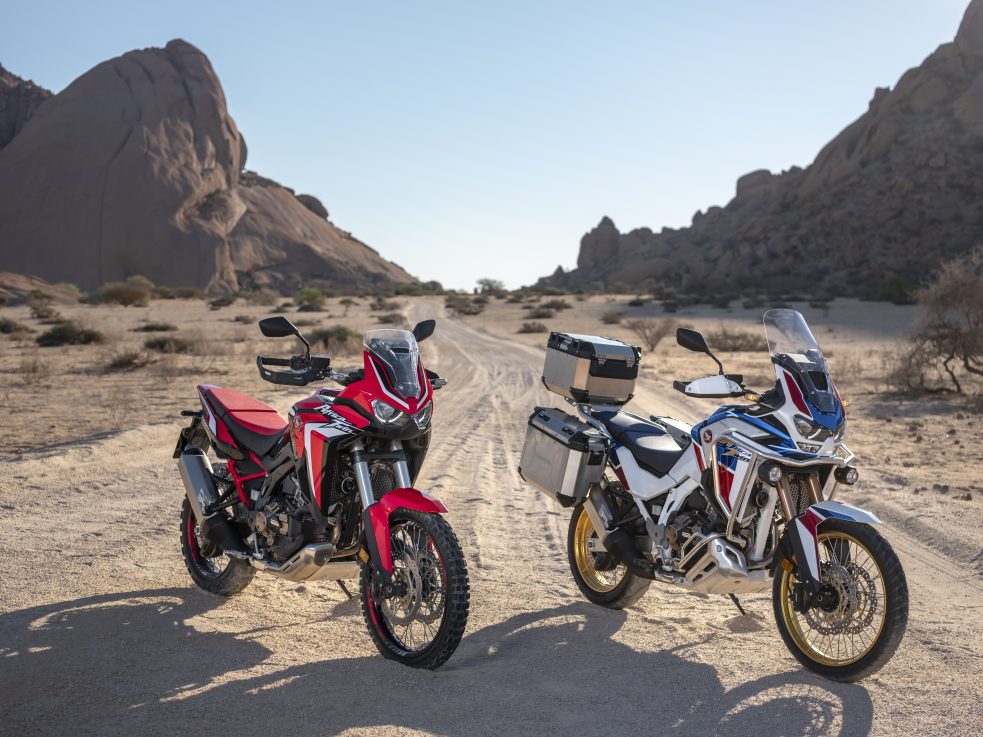 The changes to the engine are actually vast. It’s essentially the same in architecture, but every detail has been tweaked, whether you’re talking fuel injection, cylinder sleeves, cylinder head, valve lift, ECU programme, clutch engagement etc. And, not least, new emissions systems to meet the ever more stringent EU requirements. Capacity has grown by way of a longer stroke (+6.6mm) and this has led to the performance enhancement, but bear in mind this still isn’t a max power ADV, the AT’s 100hp can’t compare with the 1250GS’s 136hp or KTM’s 1290 Adventure R’s 158hp. In an off-road environment that difference doesn’t register, anything over 70hp is going to be a handful, but for autobahn attacks the AT will struggle still against these two.

More than anything, the AT has lagged behind the opposition when it’s come to electronic aids. For 2020 this no longer looks the case. The IMU should bring much-needed refinement in the sensitivity of the various aids, making the set of riding modes much more reactive and so more useful (on past AT’s we’ve often turned the aids off as a preference for off-road riding).

Alas, only the new Adventure Sports gets what Honda have termed EERA (electronically equipped ride adjustment) for the Showa suspension – and only then as an option. This gives four damping settings that can easily be selected: soft, mid, hard and off-road; and four preload settings for the shock: solo, solo with luggage, two-up and two-up with luggage. That’s much needed and if it works it’ll be a positive boon and brings a level of sophistication that’s been missing with the Honda.

The touch-screen TFT display is a much-needed replacement for the old LCD instrument panel and actually looks like a step ahead of the opposition being that touch screen generally gives an easier, more intuitive, menu navigation experience. Of course a touchscreen isn’t so accessible when riding, so it looks like Honda has left us with handlebar mounted direction buttons and joysticks – the best of both worlds. 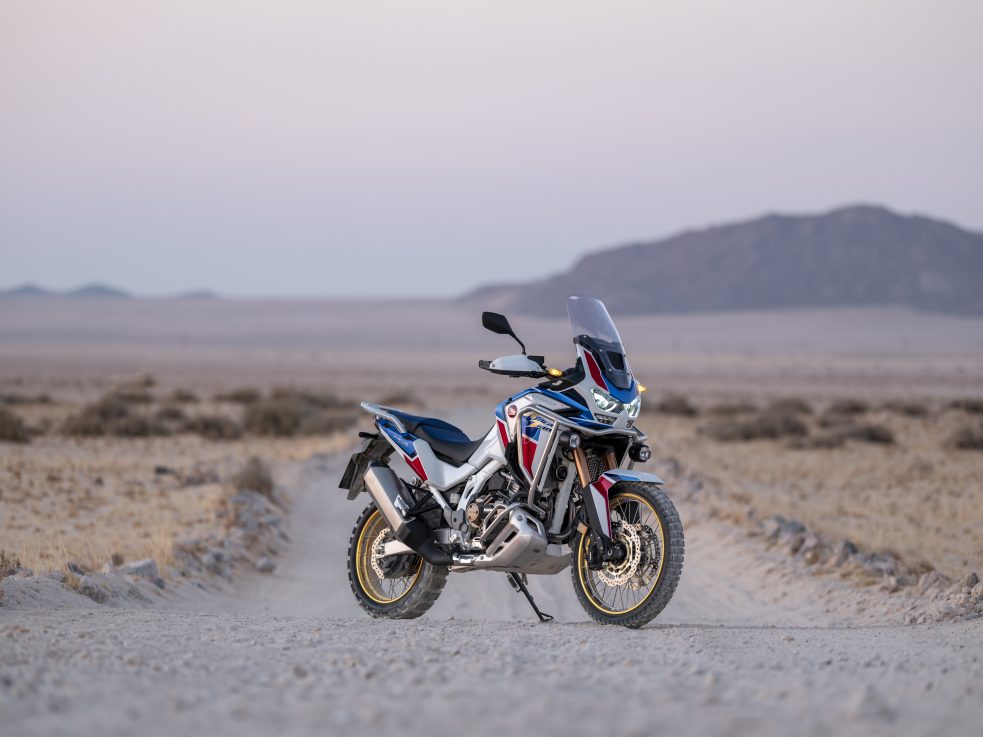 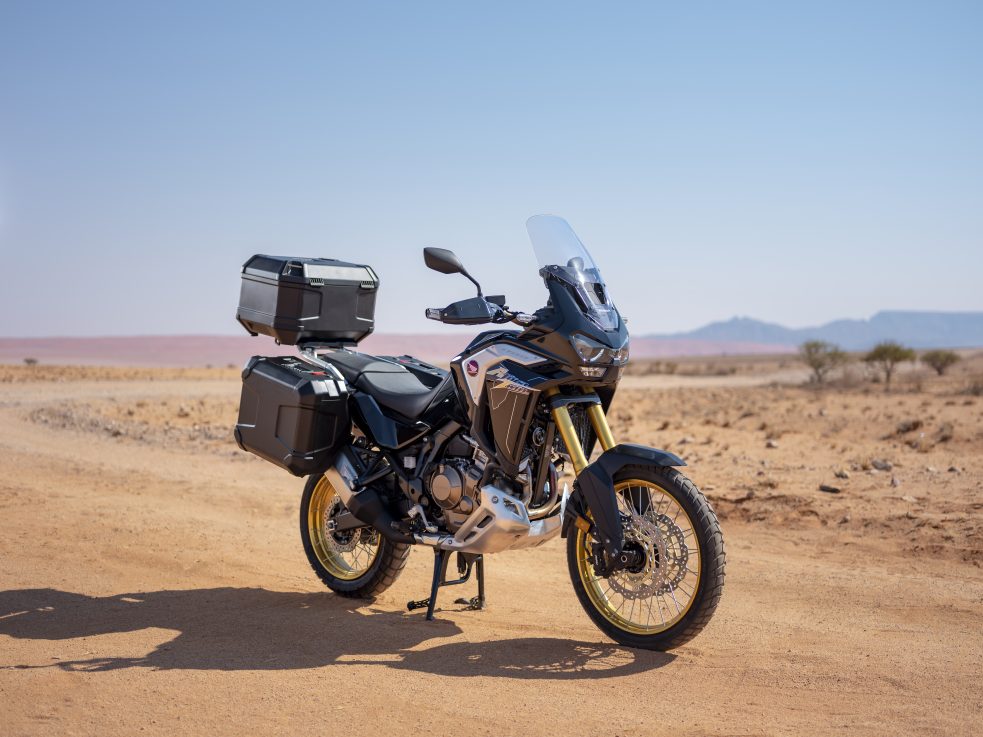 There’s a lot to like! Tubeless tyres – thank you, Lord. Wheelie control – possibly a reaction to too many self-aggrandising YouTube/Facebook videos of ADV-cocks playing skids and wheelies. Apple Carplay – very nice, when your Apple phone allows (mine is always kicking off). Bridgestone AX-41s or Metzeler Karoo Streets as OEM – very nice. LED lights – spot on. Lighter, stiffer frame – we’ll take one of those. Improved suspension settings – we hope so, the settings on past ATs have seemed on the soft and under-damped side, so a firmer (but still plush) set-up would be an improvement. Slimmer seat for easier ground reach, and lower seat on the Adventure Sports – excellent. Three stage cornering lights on the Adventure Sports – also good. Slimmer bodywork front and rear, plus restyled lights –ace! Heated grips as standard (on the Adventure Sports) – job done. 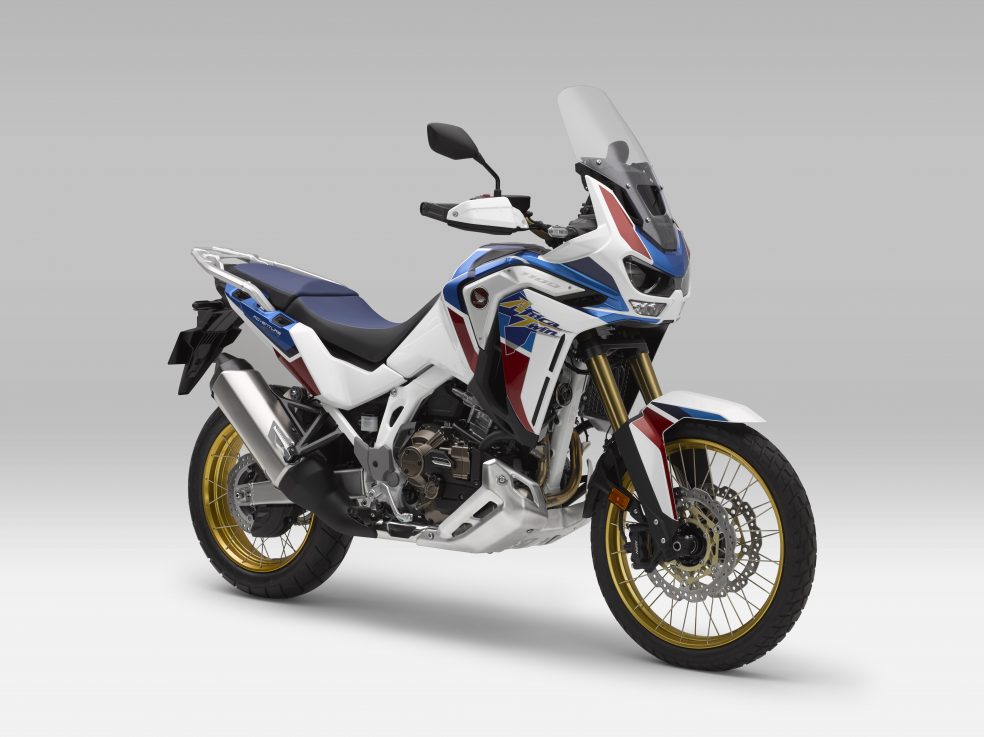 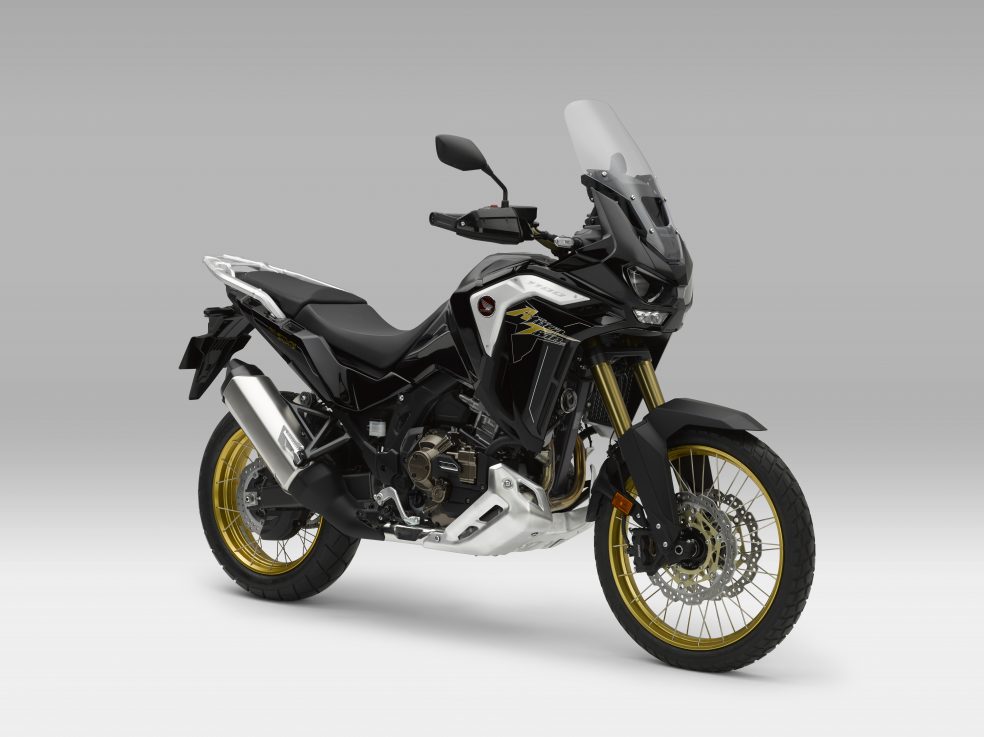 Honda has made a pretty major revamp here. The changes could probably be counted in the hundreds. The Africa Twin and its Adventure Sports sibling look like they’ve leapt forward a half-decade technologically and the subtle restyle makes the new bike look great without immediately dating the existing model.

It’s still a 100hp machine though. Only this is a good thing. The way KTM has reshuffled their model line-up, with the 790 kind of replacing the 1090, and with BMW’s F 850 GS being where it is, Honda has a discernably unique offering again almost solely occupying the middle ground between the 800 and 1200 markets. And now being even more refined it’s looking very capable of defending its territory.

Of course critics will still say ‘it’s not a 1250 GS’ but then Honda has the VFR1200X (Crosstourer) for that fight, all 130hp V4 of it. Kind of odd that bike gets forgotten so much.

Anyway, big news here is RUST will be attending the world launch of the new Africa Twins in mid October, so look out for our launch report coming shortly after that.