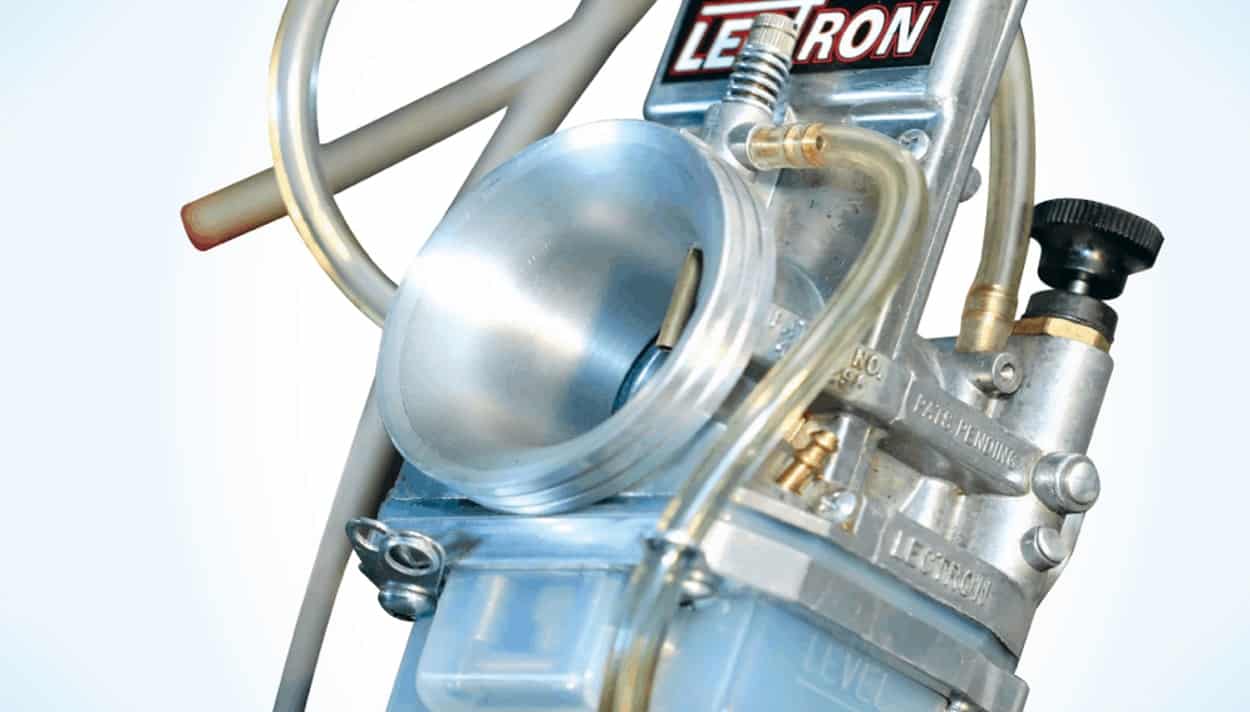 LECTRON – THE NO CARB DIET

More a lo-carb diet. Lectron’s 38mm high velocity power jet carburettor makes two-stroke jetting a chore of the past. Our Warren M. asks whether it makes the fuel-injected bikes of the now (and future) unnecessary too…?

Not everyone is going to be seduced by the new generation fuel-injected TPI and TEi Austrian two-strokes, either because they can’t afford one or simply just don’t want to accept this darn right ugly new world we live in these days. For many there’s a significant amount of nostalgia attached to riding a two-stroke, and when those certain folk think of two-strokes they expect to see that lovely old mechanical wonder that is the carburettor attached to its bore or crankcase. But is there another alternative to fuel in – jection, something that can transform a stock non-fuel injected smoker into a tree hugging green machine? Is there an alternative that removes the necessity to faff around with jetting every time you encounter a change in elevation or weather, or improves fuel efficiency, throttle response and wait for it – adds a few ponies to boot? Here at RUST we felt compelled to see if we could find that viable alternative. Did it exist, and if it did, could it rate as a practical alternative? Shockingly we have found it, and equally shockingly it’s not a brand new prototype product but something decades old. It’s an un-temperamental carburettor that doesn’t use a needle and jets to measure-out the fuel, instead a metering rod. It’s called the Lec – tron 38mm High Velocity Power Jet Carbu – rettor (quite a name). Whaaaaat?

SO IF THE LECTRON CARB HAS A ROD, NOT A VALVE – THEN HOW DOES IT WORK? The Lectron carb uses a tapered, half cylin – drical shaped metering rod that automatical – ly adjusts the proper amount of fuel required for various throttle positions. We’ve struggled to understand just how, so we read up on Lectron’s sales literature hoping that would help. Kind of, it did. It said: ‘The metering rod that vaporizes the fuel is positioned behind the air cut-off slide so its directly exposed to the manifold pressure of the engine. In the majority of carburettors this is not the case as the needle is positioned in the centre of a round slide or on the end of a flat slide, keeping it out of the manifold pressure. ‘On the Lectron carb, the increased air velocities in the venturi aids in creating a stronger fuel pickup signal at the fuel-me – tering rod. The airflow moves more rapidly past the needle in this tapered bore design, 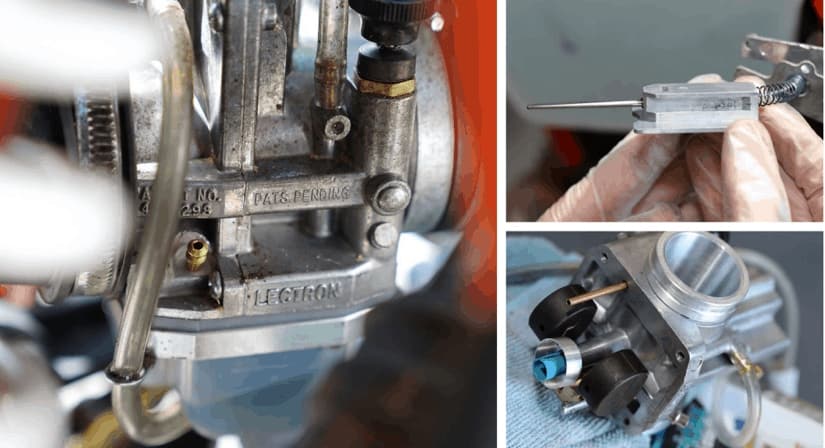 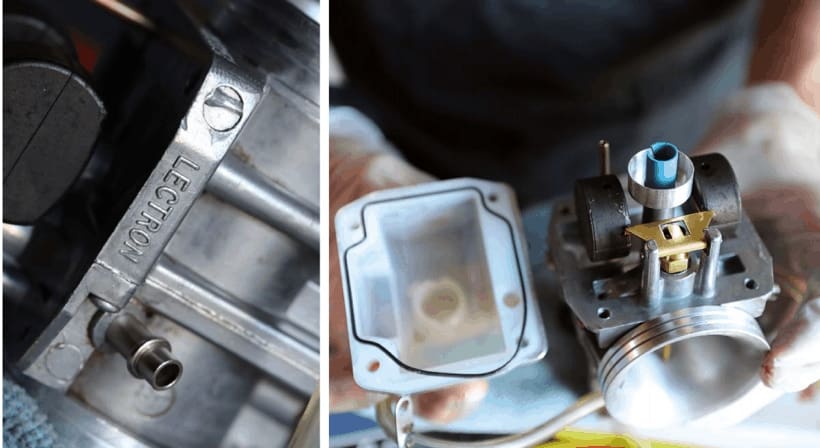 more so than in a conventional straight bore carburettor.’ We just about understood that, although we wouldn’t want to be tested on it. So we read on: ‘The shape and contour of the surface of the metering rod controls how much fuel is drawn up in response to the extremely strong fuel pick-up signal. Conventional carburet – tors have multiple overlapping fuel circuits whereas the metering rod in the Lectron carb has one smooth continuous profile that produces a smooth consistent throttle response and eliminates flat spots often found as a result of overlapping fuel circuits found in conventional carburettors.’ We decided that as much as that’s plain English we’re clearly just not mechanically minded enough to fully understand. We get the gist, but that’s it. Instead we’ve taken comfort in knowing that back in the 1970s Kenny Roberts fitted Lectron carbs to his Yamaha TZ250 road racer and won two grand prix and placed runner-up in two more – so clearly Lectron have form. And while that

might be 40-year-old evidence, probably the carb then was nothing like the one now, anytime you can call-in King Kenny as a referee you’ll get our vote… And our money. So we acquired one and set off for the workshop to see if we could make it work…

WHAT’S IN THE BOX? Besides being a pretty sexy looking bit of kit, the Lectron shouts ‘high tech’ with its long, thin flat slide and transparent float bowl. The Lectron carb’s slide is longer than usual so the carb is a little taller than stock and as a result you need a longer than stock throttle cable (manufactured by Motion Pro – so top quality). A stock cable will not work. Also in the box is a small tuning dial about the size of a Pound or Euro coin – or a Dime in the US. This is also an optional extra but a pretty good value low cost tool and makes adjusting the metering rod really simple.

INSTALLATION Warren M.: The first job was to replace the stock throttle cable with the extended Motion Pro cable. This required removing the fuel tank to follow the cable

routing instructions that come included in the box. That done I removed the three screws on the top of the slide of the carb and removed the assembly (top cover, spring and gasket). I put the slide to one side and fitted the carb onto the 200EXC by inserting the carb into the air box boot first – I wouldn’t recommend trying installing the reed side first. It’s pretty fast and easy to install. A tip here is to make sure that the reed boot seals onto the Lectron carb correctly – they have machined out a groove for the boot to slide into to create an airtight seal. Next, I installed the throttle cable into the slide assembly and inserted the slide with the flat side of the metering rod facing the engine (it only goes in this way so its pretty much idiot proof). I then checked the throttle actuation to make sure it worked properly – you should hear a good snap as the slide hits the bottom stop. The next step was connecting the fuel hose and allowing the fuel to fill the float bowl. The see-through float bowl is one of the real – ly unique features on the HV Lectron carb;

it allows you to see the fuel level. There are two lines etched into the float bowl that indicate the correct float measure (in-between the two lines is the perfect setting). I took a look at the level on my carb and it was right on the money without any adjustment.

OPERATION Still Warren M.: The bike fired on the first push of the starter button, no choke and without any adjustment at all! The bike idled well and the throttle response was immediate and snappy. I took the bike out for a quick ride (five minutes) – Lectron suggest testing under load, not just running the bike on the stand. I checked for any low-end bogging (none) and pinging at the top (none). What I did need to do over the next few test runs was to turn in the idle screw three turns to get it to idle consistently the way I like. I also had to adjust the throttle cable slightly to give the throttle a little more play, but other than that the action was crisp and exceptionally responsive. The next test was to race the bike – and 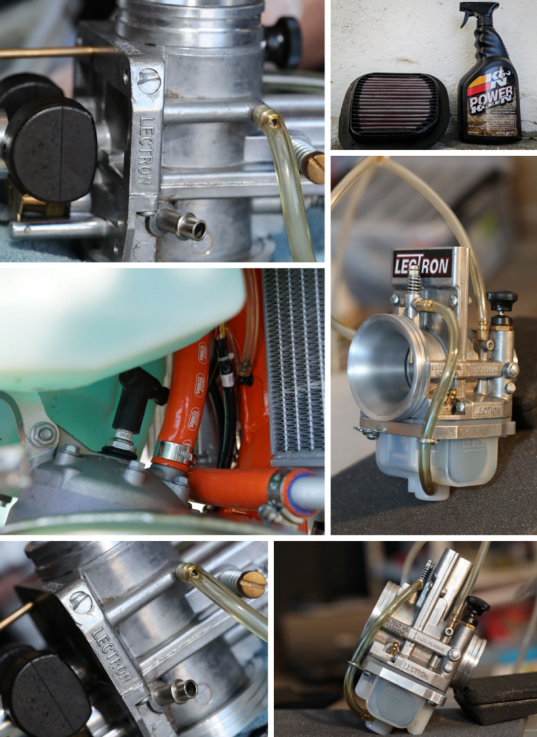 that was for three days in the Trefle Lozerien in France. And the carb performed flawlessly. It didn’t matter if I was riding in the valleys, or ascending up onto the limestone plateau or descending the almost 2000ft sub-vertical cliffs from the top of the Gorge du Tarn. I had not so much as a hiccup or gurgle from the carb. I never had the occasion or the need to make any adjustments to the power jet or use the metering rod adjustment tool to tune the carb, but if I had done it could have been done on the fly without the need to remove the carb. Simply loosen the boots, twist the carb and loosen the slide cover assembly to access the metering rod and reinstall. It’s as easy as that. If you found that you did need to tune the carb then there are three possible adjust – ments available to you: 1. using the idle screw (in for faster idle and out for slower); 2. the power jet screw located at the back of the slide and adjusted with a flat screwdriver like the idle screw. The power jet screw either increases or reduces the amount of fuel between half and full throttle; and 3. the metering rod which adjusts the amount of fuel from bottom to half throttle.

Warren M.: Of course! Frankly, I remain perplexed as to why these carburettors aren’t at the top of everyone’s aftermarket product wish list. Sure you can get the stock carbs to work anywhere – but why would you want to mess and faff with tuning or have to worry about blocked or clogged jets? For less than a new aftermarket pipe you can have the benefits of a fuel-injected alternative. In fact I wonder if the lack of elec – tronics actually adds to the appeal of these carbs over the new fuel injection – simplicity is king and with no electronics to worry about you remove the possibility of electron – ic gremlins. I ran

the 200EXC on an 80:1 pre-mix using Amsoil Sabre and could have gone slightly leaner if I had wanted to, even so the usual smoking of a two-stroke is nearly elim – inated. So for the tiny amount of premix I would have needed to carry if I was out trail riding I was left considering if fuel injection was worth it? I would really have liked to test the fuel range so I could have had a really fair assessment on just how much further I could run the 200 over a stock carb but I’ll get to that soon enough and report back. In short, it’s a five-star product that’s transformed the 200EXC into a hassle free, almost-green machine, a smokeless smooth operator. We decided to pair the Lectron carb with a K&N air filter. Engine power comes from a good dollop of both fuel and air and we wanted to give the 200 the best of both worlds to maximise the available power. The K&N’s sleek design frees up significant space in the air box while increasing the filtration surface (and hence efficiency) due to its cotton weave design. Its fits into the stock air filter cage but is so sleek that it occupies only a fraction of the space that a foam filter does and as a result allows for more airflow through the box. Nice…