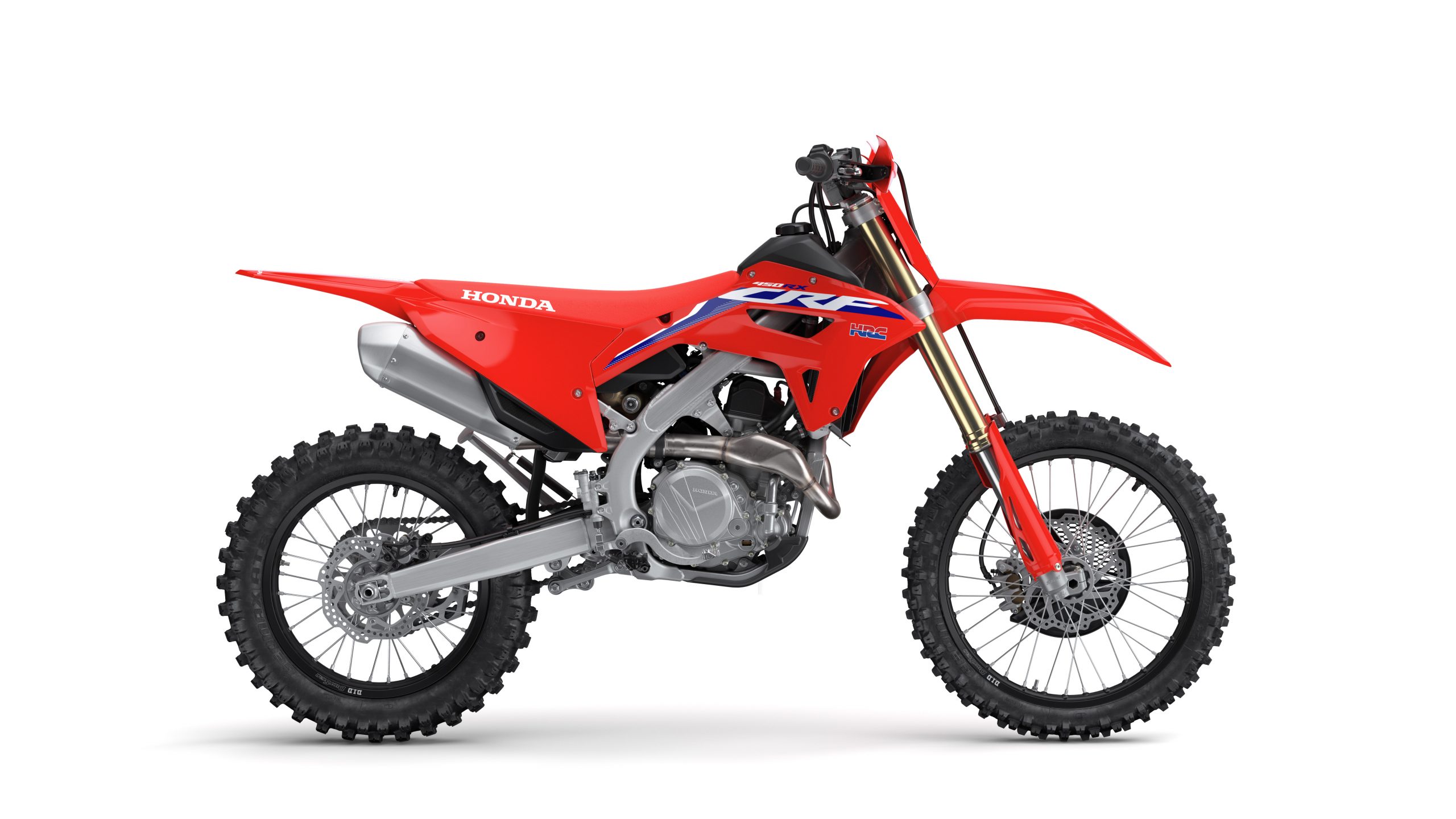 Taking inspiration – well, taking the tech, from their 2019 world championship-winning CRF450RW, Honda has comprehensively revamped their big-bore cross-country weapon, Now 2.3kg lighter and featuring a new frame and swingarm, plus changes to geometry and suspension, Honda says the new RX has greatly improved cornering performance. The engine may be the same as before, but it’s been breathed on by their tuners with intake and exhaust upgrades, new decompression system plus a return to the single exhaust muffler, all of which boost and smoothen low-mid-range driveability. An hydraulic clutch now offers greater control with lighter lever pressure. More compact plastics (with less parts – hooray!) and a smaller seat unit increase freedom of movement. Brush guards are now standard-fit and the sidestand tucks in more neatly for improved rider ergonomics.

The RX story started in the 2017 model year when Honda replaced their long-running CRF450X with the all-new, competition-ready cross-country machine  – the CRF450RX. Unlike the ageing X, the RX was a super-close relative of the CRF450R motocrosser, taking as its base the engine and chassis of the 17YM CRF450R – itself Honda’s first totally new 450cc motocrosser in eight years – with modifications including larger fuel tank,18-inch rear wheel, revised PGM-FI mapping and suspension changes.

Development since then has mirrored that of the R, as an HRC-developed cylinder head upped peak power and torque considerably in 19YM; HRC launch control was also added along with revised rigidity balance for the frame and swingarm, a new front brake caliper and adjustable-position Renthal Fatbar. For 20YM, again just like its MX sibling, it received Honda Selectable Torque Control (HSTC).

So, here’s what Honda say is new in the chassis department:

Thanks to narrower main spars, at 8.4kg it weighs 700g less than the previous design, while a redesigned subframe also saves 320g at 910g. The chassis dynamic is also new: while torsional rigidity is maintained, lateral rigidity has been reduced by 20% to increase corner speed, traction and steering accuracy. The aluminium swingarm has a new rigidity balance tuned to match the frame, with narrower arms and pivot point. The Pro-Link ratio is also revised.

Both top and bottom yokes are revised, with more flex, for quicker steering and feel. Fully adjustable, the 49mm Showa USD coil spring fork is a version of the Showa ‘factory’ fork supplied to MX race teams in the Japanese championship. With the target of improved, smoother cornering performance, the forks have been revalved, stroke lengthened by 5mm to 310mm and the axle clamps’ rigidity increased. The Showa rear shock’s main piston valving is enlarged for faster response and improved bump absorption. Its spring also uses the world’s lightest steel – to save 200g.

The damping/spring rate of both front and rear suspension are new for 21YM – and lower than the CRF450R – to suit a wider range of conditions and help with comfort over longer rides.

The seat is now shorter, lighter and 10mm lower at the rear, to aid the rider’s freedom of movement. It’s also much easier to remove and install. Maintenance is also easier, as the number of 8mm bolts securing the bodywork goes from 6 to 4 each side, while the side panels are now one piece (which if you’ve worked with the latest CRF plastics you’ll know is a great relief). The new machine is also slimmer by 70mm (50mm on the left, 20mm on the exhaust side), and the plastics thinner, while the tank cover has been removed.

Having received a peak power boost of 1.8kW, plus 2Nm more torque and a stronger bottom-end for 19YM, in 20YM development of the 449.7cc four-valve Unicam engine centred around refinements and optimisation of the PGM-FI mapping and HRC Launch Control, plus the addition of Honda Selectable Torque Control. For 21YM the focus – with upgrades derived directly from Tim Gajser’s championship-winning HRC machine – is on drivability in the low to mid-range, and weight saving, further enhancing cornering performance.

A significant increase (up to 0.6kW) in peak power above 5,000rpm is accompanied by a stronger low-rpm torque feel, the result of an air box increased in size by 1.8L to 4.1L  – that is a big increase and for sure this must allow the engine to btreathe so much deeper, and so make much more power. The new air box – which can now be accessed simply with the removal of one side shroud bolt – feeds a redesigned, lighter 46mm throttle body, which optimises intake efficiency and makes active use of latent heat vaporisation in the inlet ports.

The injector angle, too has gone from 30° to 60°, spraying fuel all the way back to the butterfly to improve intake efficiency, cooling of the charge and all-important throttle feel. The decompression system is also new: its counterweight is moved from the right of the camshaft to the left, giving more stable operation at low rpm with increased stall-resistance.

If an engine is breathing in deeper than it needs to breathe out more too, and the exhaust side of the motor has been duly redesigned. The biggest change is to the twin exhaust ports: like the CBR1000RR-R Fireblade their exit is oval rather than round in shape for improved efficiency, and the 5.08 kg 2-1-2 exhaust design of the previous model has been replaced by a single 3.84kg downpipe and muffler (which also does away with a heat shield) saving a full 1.24kg. The downpipe also tucks in 74mm closer to the centre line (improving rider ergonomics) while the pressed muffler features twin resonators that reduce noise while boosting power.

Saving more precious grams, the magnesium cylinder head cover has been redesigned with thinner material and the fuel pump made smaller – it secures with 4 bolts instead of 6, saves 120g and offers the same pressure and filter life as the previous design. 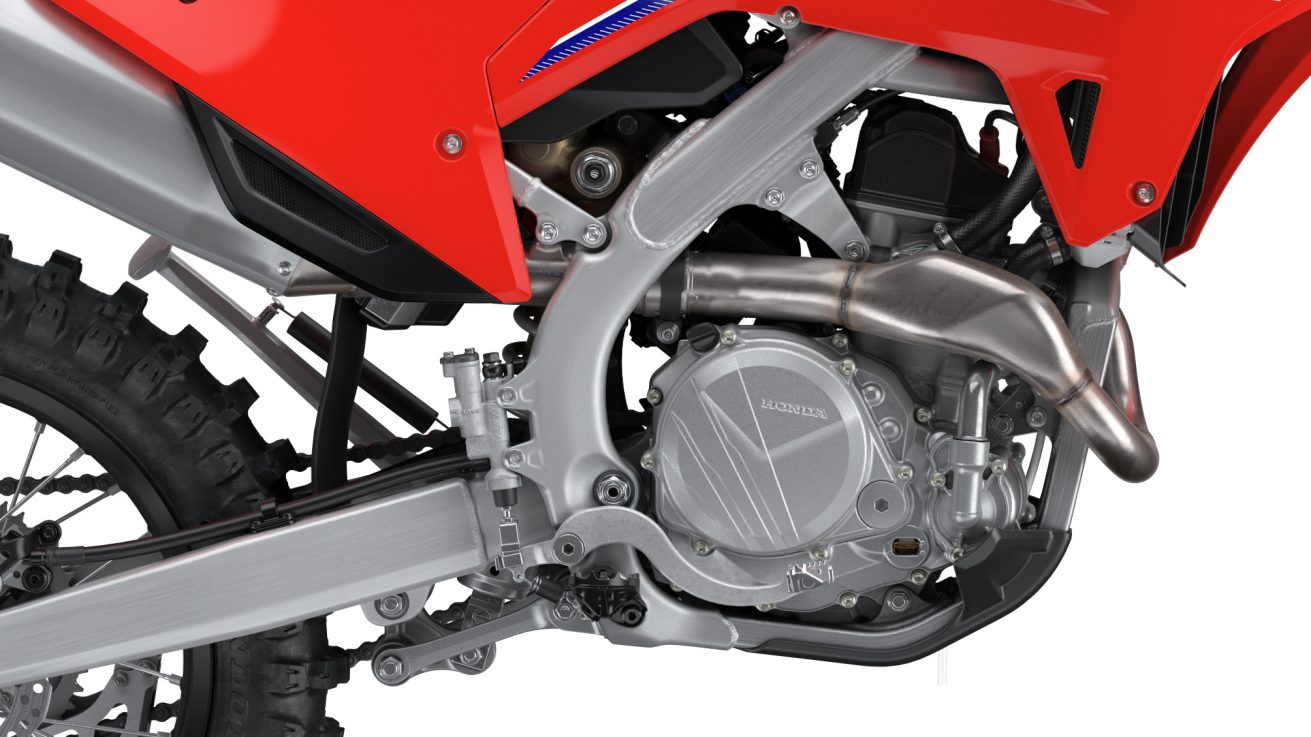 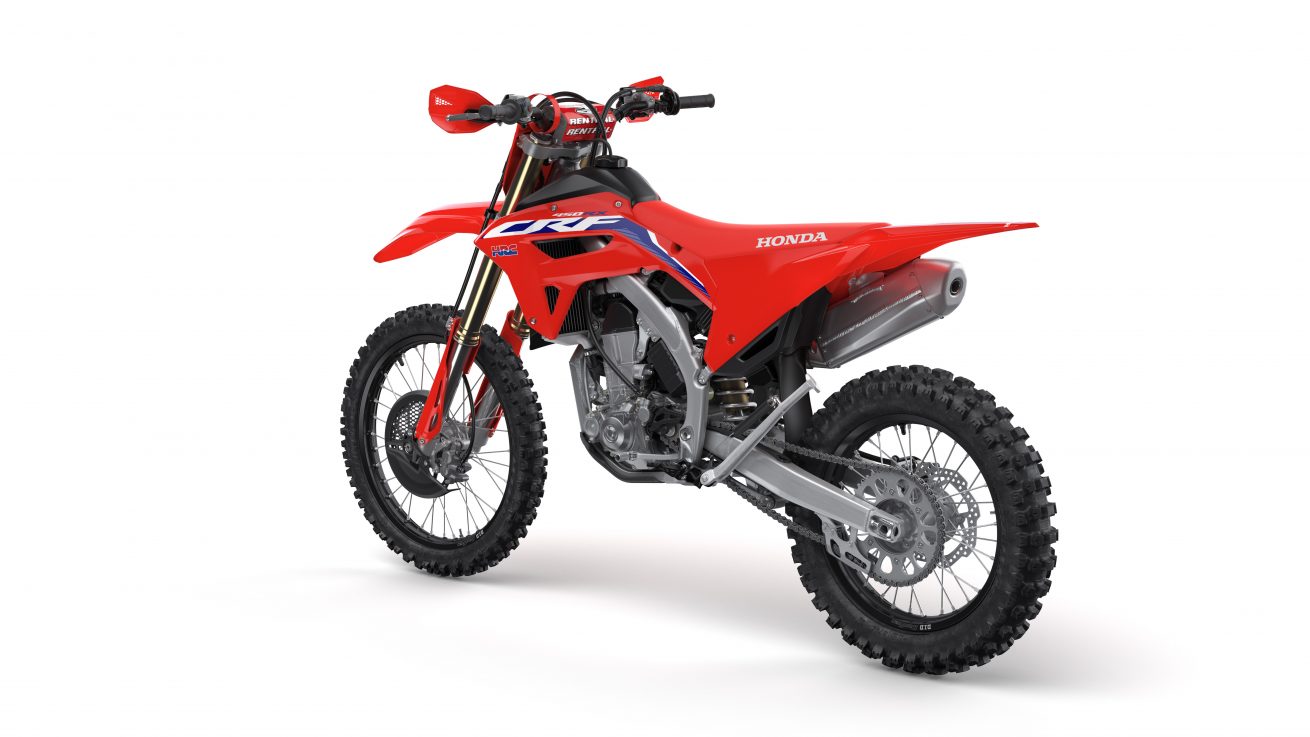 Following the road bike market, off-road is fast catching onto rider aids. WE’ve had adjustable engine/ignition maps for a while but Honda has been working with traction control, launch options and easy-to-understand ‘Aggressive’ and ‘Smooth’ modes. In summary:

The CRF450RX gained HSTC in 20YM and the system is unchanged for 21YM. It works to minimise rear wheel spin (thus wasted forward drive) and maximise traction. It doesn’t use a wheel speed sensor, and critically maintains feel at the throttle while managing power; ignition timing is retarded and the PGM-FI controlled when the rate of change of rpm is detected to have gone over a set amount.

In Mode 1 the system intervenes most lightly, and after the longest time ­– useful for reducing wheelspin and maintaining control in tight corners.

Mode 3 has the system intervene more quickly and strongly, and is therefore useful in more slippery, muddy conditions.

Mode 2 naturally offers a mid-point between 1 and 3 in terms of speed and strength of intervention.

We’ll miss-out the launch control details for now and skip ahead to the rider modes.

The LED also displays mode selected, but with a blue light.

Gaining a 21YM mapping update the HRC Setting Tool can deliver a much more easy-going Smooth mode, with gentler throttle response for novice riders – bearing in mind this motor needs to keep legends like Tim Gajser and Ken Roczen happy we can see that smooth mode being very necessary for the rest of us mortals. So yes, if you’re feeling tip-top then feel free to select the Aggressive mode with a hyper-sensitive throttle reaction and engine response for high-test race conditions. 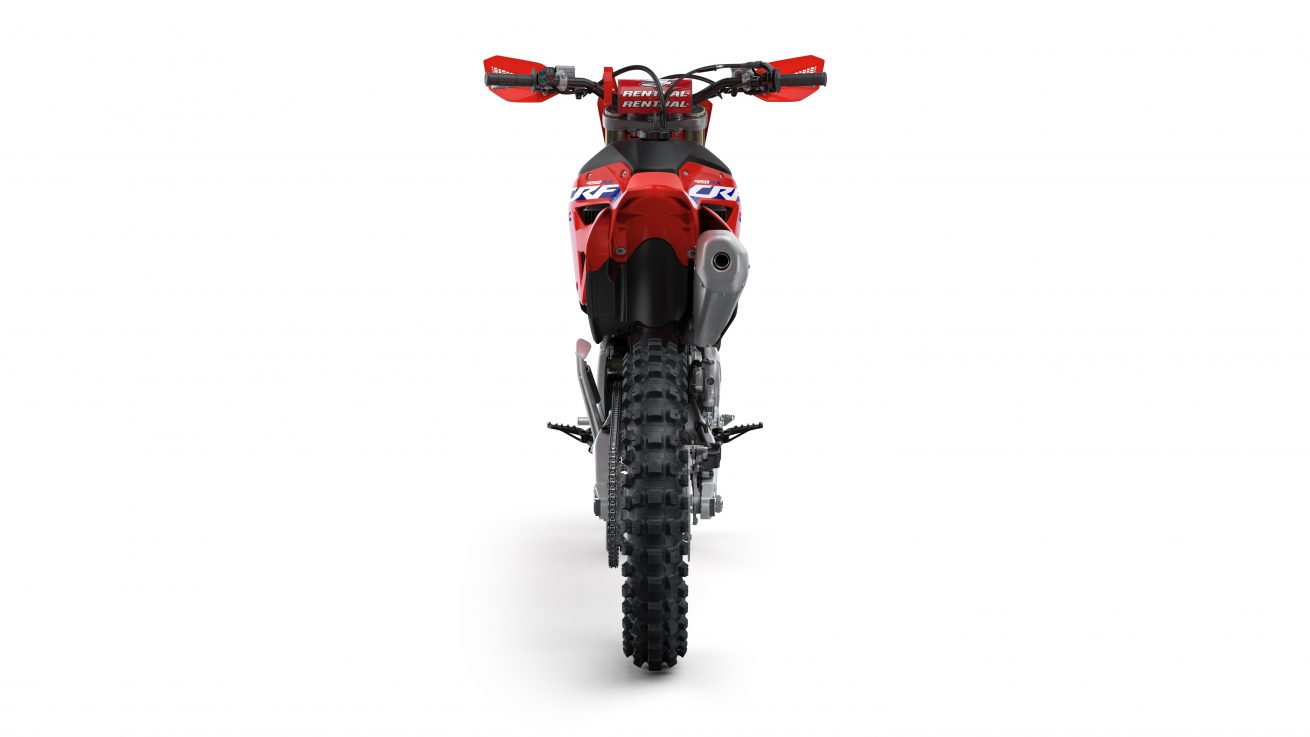 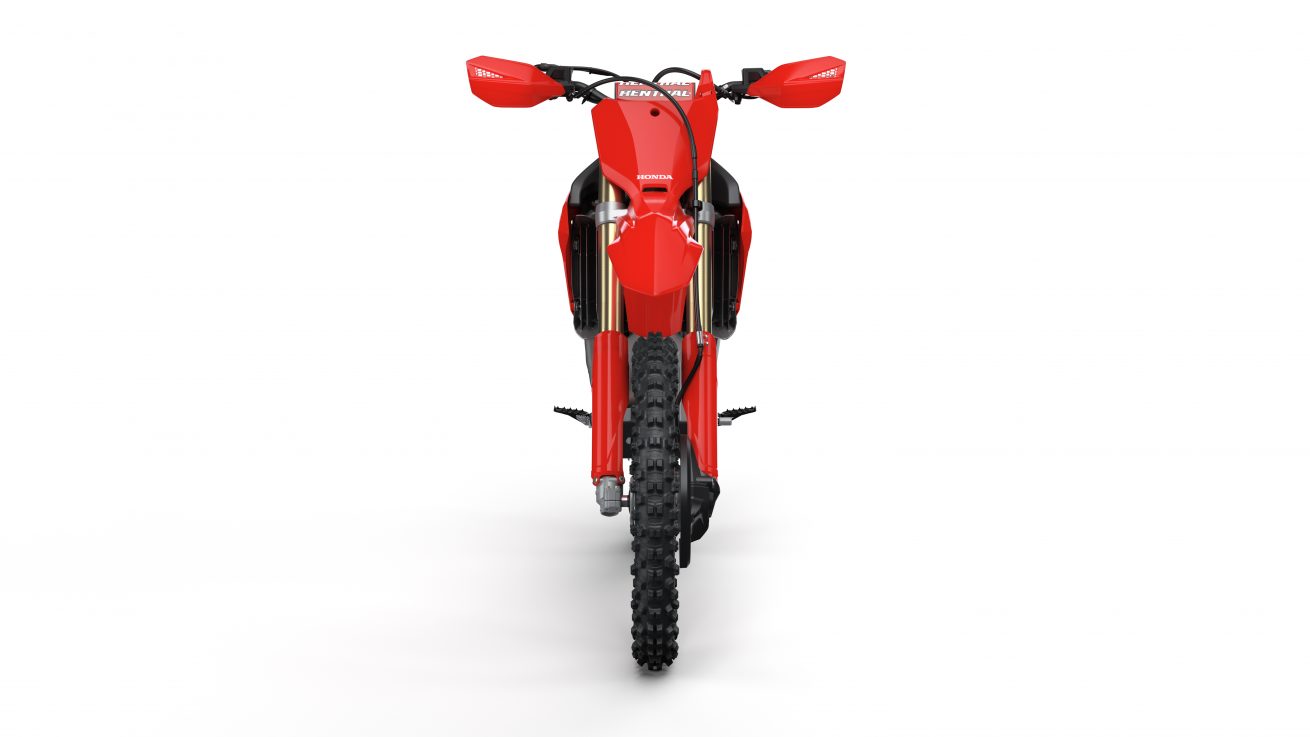 In all, it sounds something of a weapon. It’s not calling itself out immediately as an enduro/trail scalpel. However, if your regular ride alternatives between say motocross and cross-country this could be a great blend and without a doubt will be great fun trying to hold on to when going full gas. A stubble field weapon no question!

Here at RUST, having spent considerable time juggling interlocking bodywork panels and a range of bolt sizes on our 2019 CRF250RX, we’ll save our loudest applause for the rationalisation in the bodywork. 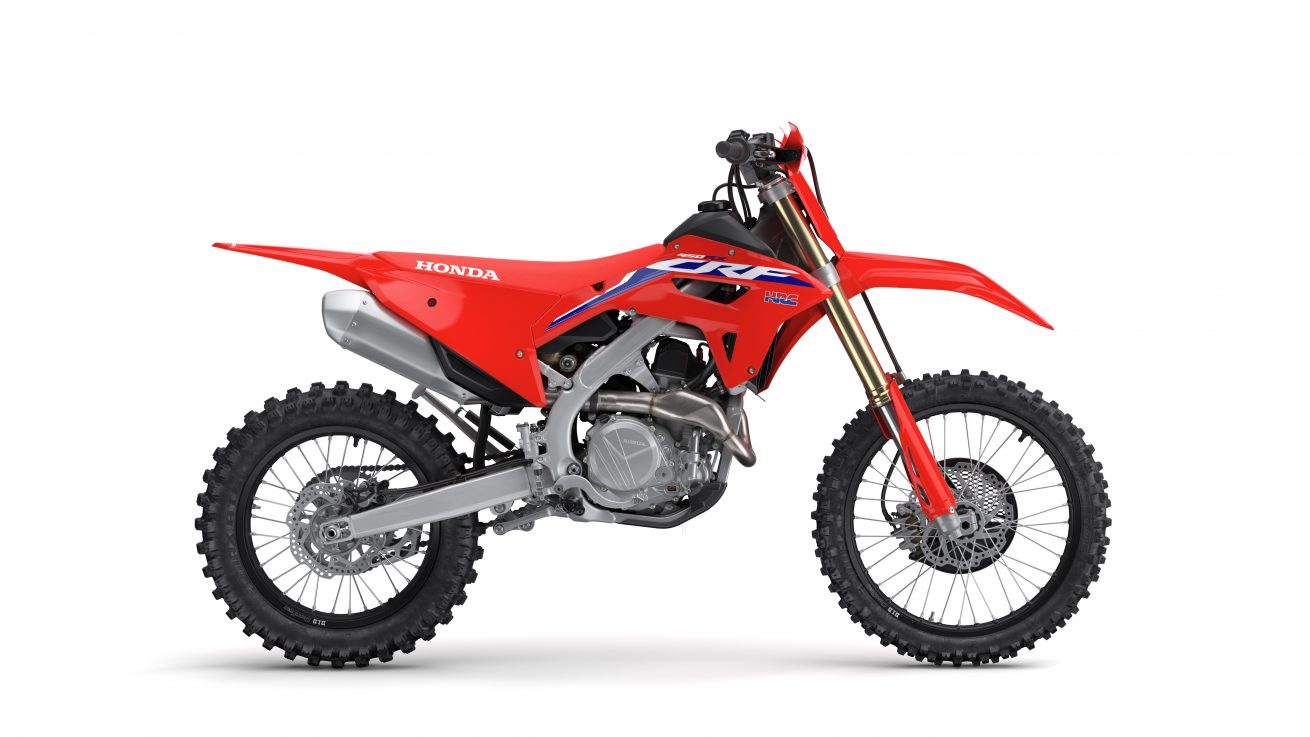 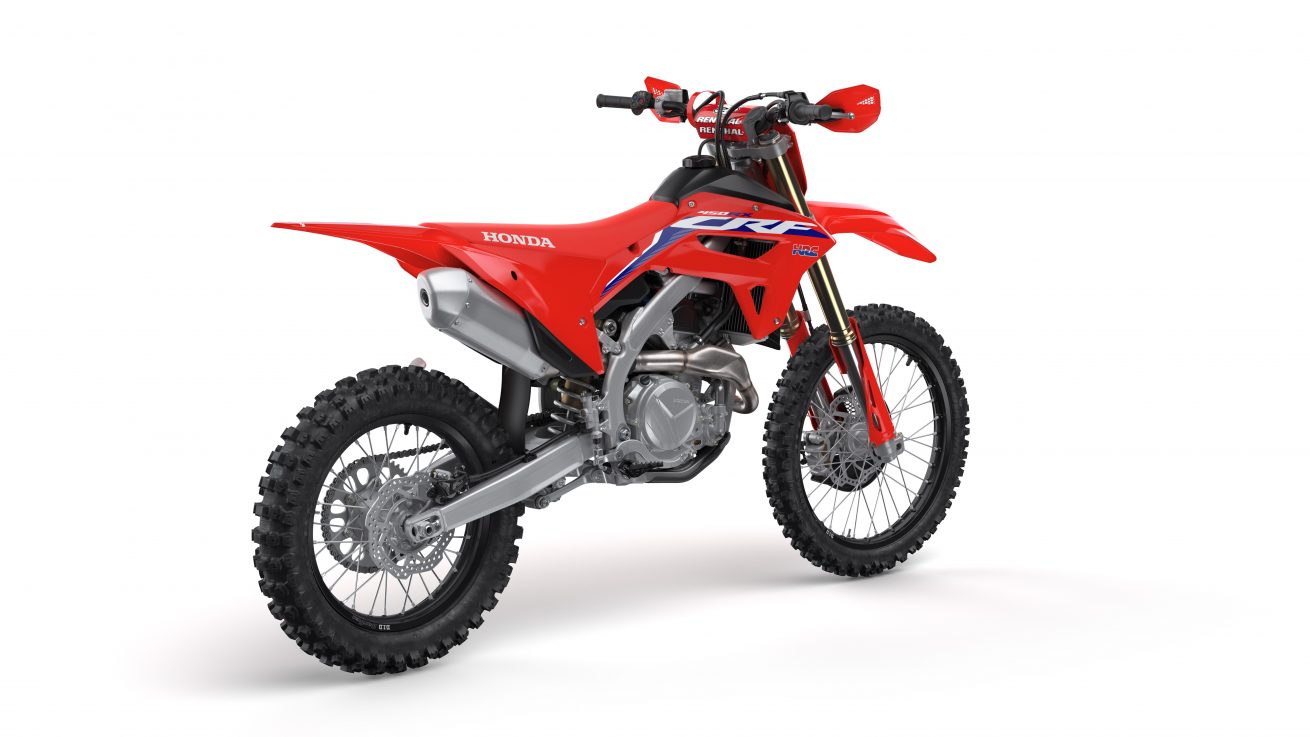 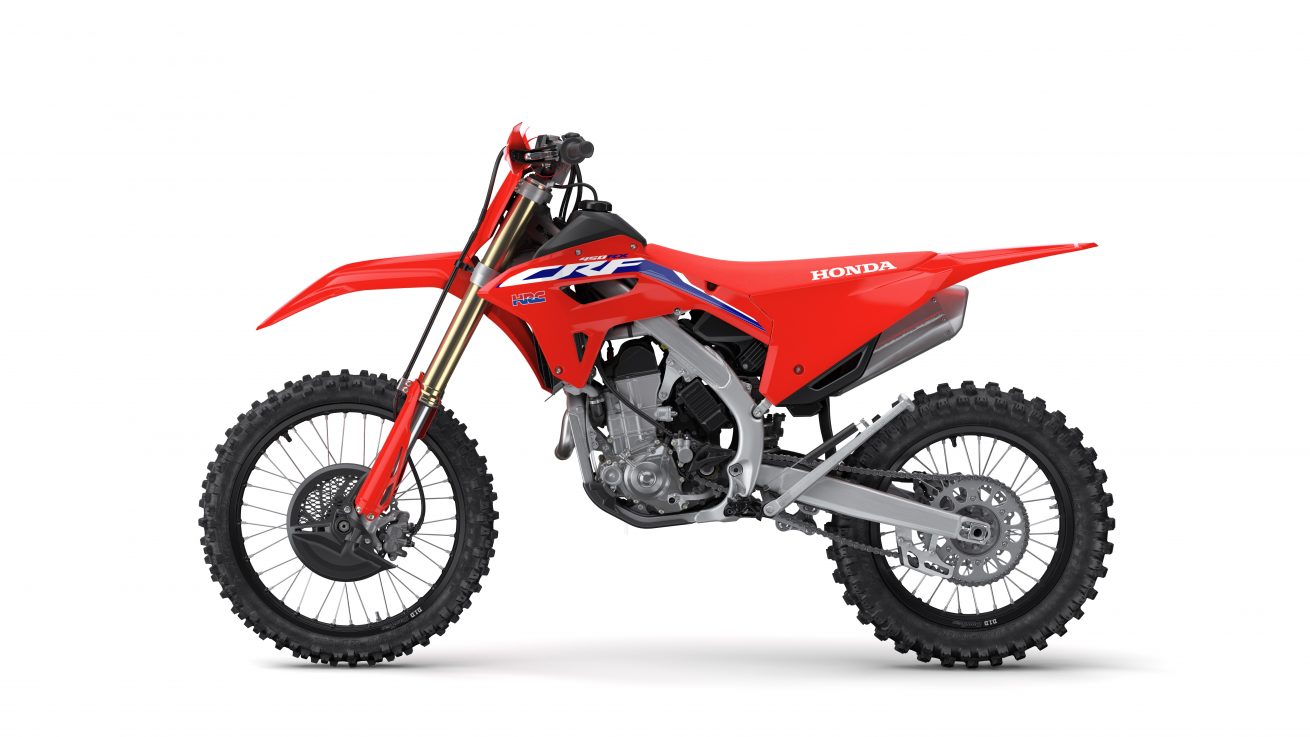