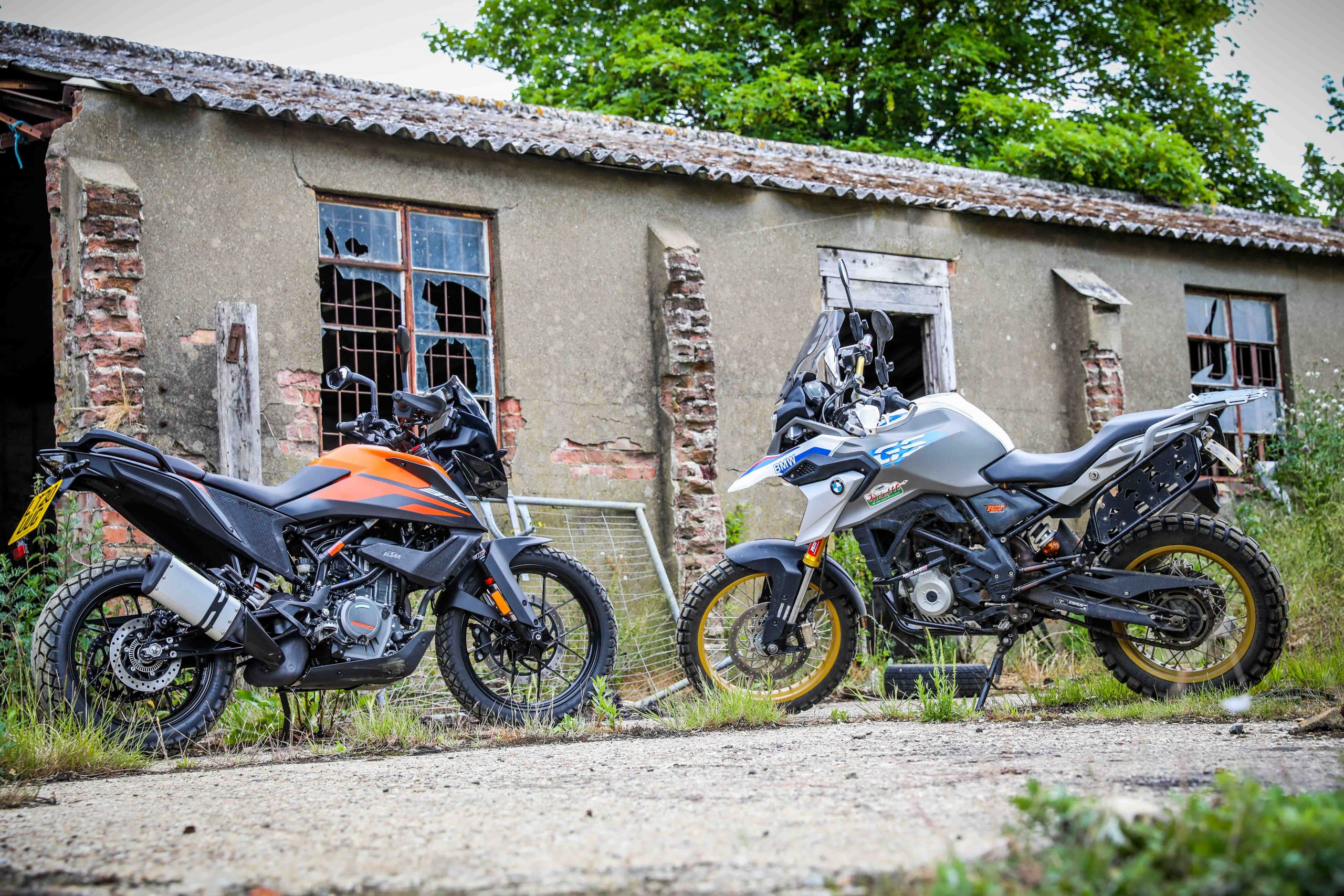 Lightweight single-cylinder adventure/travel bikes. They’re definitely a thing. Although they have been for some time, to be honest. But redefined by the constrictions of the European A2 licensing laws and Euro5 emissions regulations they are morphing into new shapes. Having recently tested the new KTM 390 Adventure and previously the BMW G 310 GS of course we had to put these two newest of shapes together. Is one better than the other?
PrevPrevious
NextNext
PrevPrevious
NextNext

We had to make this comparison. For no better reason than when we tested the Rally Raid Products modified BMW G 310 GS (read that test here) we were so impressed, so surprised, at just what a great all-rounder it felt, regardless of its size, that not to benchmark the new KTM 390 Adventure against it would be a travesty. Besides, KTM is clearly going for the BMW’s throat with the 390.

It would have been cool to have the two bikes in standard trim, but you can’t always properly align your ducks, so the BMW in this comparison is that same RRP-modded example I tested before, with around £2000 of performance enhancements, not least of which are the wire-spoke wheels and suspension upgrades. That may seem unfair, but with nearly new G 310 GSs popping up in the classifieds with ultra low mileages for around the £3500 mark you could build a near-as-new RRP-modded 310 GS for pretty much the ticket price of the KTM (£5499), so the comparison isn’t entirely unbalanced.

So less of the waffle, how do they compare? Let’s see.

Well, without the benefit of putting thousands of miles on each this is going to be an awkward one to call.

The BMW has of course already suffered slightly for having to recall their 310s for either a frame modification or entire frame replacement on account of side stand bracket failures. That is a shame as the build quality – on a visual inspection – is pretty good. The frame appears quite butch (with large diameter tubing, trellis style) and that stand issue excepting generally the quality looks pretty good given the price point. RRP’s John Mitchinson has put his test mule 310s into some tough challenges, from riding extreme adventure trails in Australia to having one ridden all the way back from Australia, across Asia-Russia–Europe to its UK base. Something like 10,000km and, side stand issue aside, it shrugged that ride off, no problem.

The KTM looks 95-98% high quality. Neatly styled with their unique colour impregnated moulded bodywork. It’s got that TFT instrument panel too. Lots of things look great. The only lets downs are the odd cheaply chromed nut, bolt or stud and the plasticky hand grips, and if we’re really picky, we’d like to see the trellis frame a little neater in finish around the swingarm area (there’s flat plate there). Otherwise again, on a visual basis we’re mostly satisfied. The motor comes from the 390 Duke, which has been around since 2013 (revamped in 2017). Early Dukes suffered from overheating and the odd build quality issue, but these were duly sorted – note: the Adventure comes with a bigger radiator – and the 390s have proven themselves sound over the ensuing years.

There’s no reason a small capacity bike needs to be uncomfortable. And that feels to be the case here. Despite the 313 and 373cc capacities (which we might consider ‘small’) both bikes have roomy seated positions that have been just fine for JB’s size (6’0”, 90kg). Both, given stepped seats, don’t have quite the options for shuffling around as you might like, or is possible with flat enduro or rally-type seats, but both BMW and KTM give you alternative options, with higher or lower heights, and we’re intrigued by KTM’s gel seat option for long distance rides – nice touch.

The ride positions do feel different. On the KTM you ride on the bike, there’s just a small screen and everything feels low-ish, like a sports bike. The seat is lofty-ish at 855mm. On the GS you sit in the bike; with that lower seat height of 835mm the tank and fairing kind of cocoon you, certainly there’s a sense of a lot more weather protection.

Off-road, well, standing on the 390 feels a little awkward with the low handlebars and the oddly angled foot pegs. On the RRP 310 meanwhile, with higher bars and dedicated dirt foot pegs, not to mention the substantial ground clearance, it’s far more natural to stand on.

Both bikes feel secure enough on the road, albeit the KTM significantly more so with its road-biased geometry and ergos. Yeah, you can really swing the KTM around on the road with lots of confidence. On the RRP 310GS, with its higher-than-standard suspension (up from 180mm to 200mm) and riding on serious adventure tyres, you ride just that little more gently.

Both engines like to rev, but the KTM much more so. The KTM can do a decent road race impersonation and you can certainly hack along really sharp all the way up to its 100mph (thereabouts) top speed. On the BMW there’s still some rev there but it’s not got the same energetic feel, which isn’t altogether a bad thing as for a steady properly-legal road ride (plodding) this is just fine. Neither bike – in solo mode, these really are for us one-person bikes – feels underpowered. As life-long grown-up motorcyclists, both bikes kept us properly entertained – both bikes have far more potential than just as starter bikes.

Handling was sharp as you like on the KTM and the brakes felt up to the job. Mentally there’s still that little nag in the back of your head, it says Bybre on the calipers, not Brembo, so you kind of ride with a little caution because of that (yeah, seems we’re brake snobs). Suspension felt fine, too. And on the motorway the 390 bossed its way confidently in the outside lane.

On the BMW, the uprated suspension gave the ride a secure confident feel, you just backed off on account dirt knobblies really are not to be trusted to serious crash braking (albeit the ABS should save our bacon in these instances) or for extreme cornering. The tank and fairing not only offer the rider more wind/weather protection than the KTM, but also adds a little to the bike’s presence, so you’re less likely to be bullied by small-bike dismissive car drivers.

Both bikes performed stronger on road than we expected and as daily ‘riders’ as well as weekend wanderers these are pretty good choices. The extended fuel range (allied to their 70mpg frugality) also adds to their practicality. But bottom line, performance-wise given everything except weather protection, the KTM wins on road.

If the KTM wins the road battle, the RRP BMW aces the dirt. It is uncommonly good. Don’t get us wrong, this is not an enduro bike, but for green lane riding at appropriate green lane speeds it is perfectly dialed. Despite the fairing and tank limiting (seated) forward weight placement, there’s still confidence in the front wheel going where you intend, and staying there. We didn’t miss a 21” hoop, the 19” feels just fine. Equally the higher handlebars and proper pegs give a natural off-road stance. And the motor, which feels torquier given the slightly rorty Scorpion tail pipe, seems to work well off-road too. We’ve said it before, but for a long distance off-road ride (yes, even a TET ride) this bike is a great option, much better than taking an enduro model. And we say that as lovers of enduro bikes, but horses for courses…

The KTM had a fairly disastrous first off-road test ride and was made to look all the worse for riding in the company of the RRP 310. Slick mud and ruts are awkward at the best of times, but on road-biased Conti TKC70s, with road-biased ergonomics and limited ground clearance the poor KTM was all at sea. However, a second eight-hour ride through dry Kentish green lanes (and back roads) let the KTM claw back a whole bunch of points.

Arguably the key to understanding the KTM is to think of it more like a dirt/flat tracker than an enduro. Skids and wheelies, even jumps, but go easy on the real bumps, roots and all. It felt best riding sat down and while the motor’s bottom end isn’t as strong as the BMWs (or at least doesn’t feel it – the torque figures suggest otherwise) it pops along just fine.

The ground clearance, or lack of, is its biggest drawback. In Kent it wasn’t a problem at all, but in Northamptonshire with the ruts pushing on the belly pan and knocking your feet off the footpegs, yeah, it was an issue. Given the KTM’s architecture (the exhaust and engine sit low) it’s difficult to see where you would start to alleviate the issue – you know, faffing around with longer suspension or trying to re-route the exhaust. Reality is, don’t bother, just accept the bike for what it is, what limitations it has, and enjoy. Look at the positives – and there are many – and get over this one negative.

So that all said, the KTM may not be an ideal TET bike, but say for Adventure Country Tracks (ACTs – look them up if you’re not familiar) it would be just fine and it would storm such trails alongside 790s and 1290s ADVs quite happily.

Taking the road and dirt evaluations we come up with a 1-1 score draw. Add in comfort, maybe given the weather protection it goes 2-1 to BMW. But for raw appeal, with its vibrant aesthetic and keen motor that make road riding such a joy, the KTM pegs it back to 2-2.

That TET/ACT analogy best sums it up. The 310 GS best adapts to tricky off-road riding. It also best suits the rider who maybe wants a more soothing ride, who’s not wanting to rush around so much. For bumping around green lanes, short or long distance (wild camping along the way) the RRP 310 is just ace. For an ACT ride, which can be a little pacier, less extreme (I’m recalling the Portuguese back roads) the KTM is probably the call. We also love KTM’s dedication to aftersales with an extensive catalogue of protection parts and various add-ons including luggage. Kitted up and ridden with some swagger the wee KTM would be a hoot.

So it’s kind of curious. You get the impression both BMW and KTM aimed for the same markets with these bikes – the emerging Asian market and the A2-licence Europeans, plus dual-sport (or adventure-lite) riders in the US and elsewhere. KTM arrived later and has brought the more potent machine, so you’d think that would win the argument, but that’s never the whole story. Same target markets, but surprisingly different products. Which gets your vote ultimately depends on the kind of rider you are. And don’t ask us for our vote – confirmed schizophrenics, we’d take either. Or do we mean both? 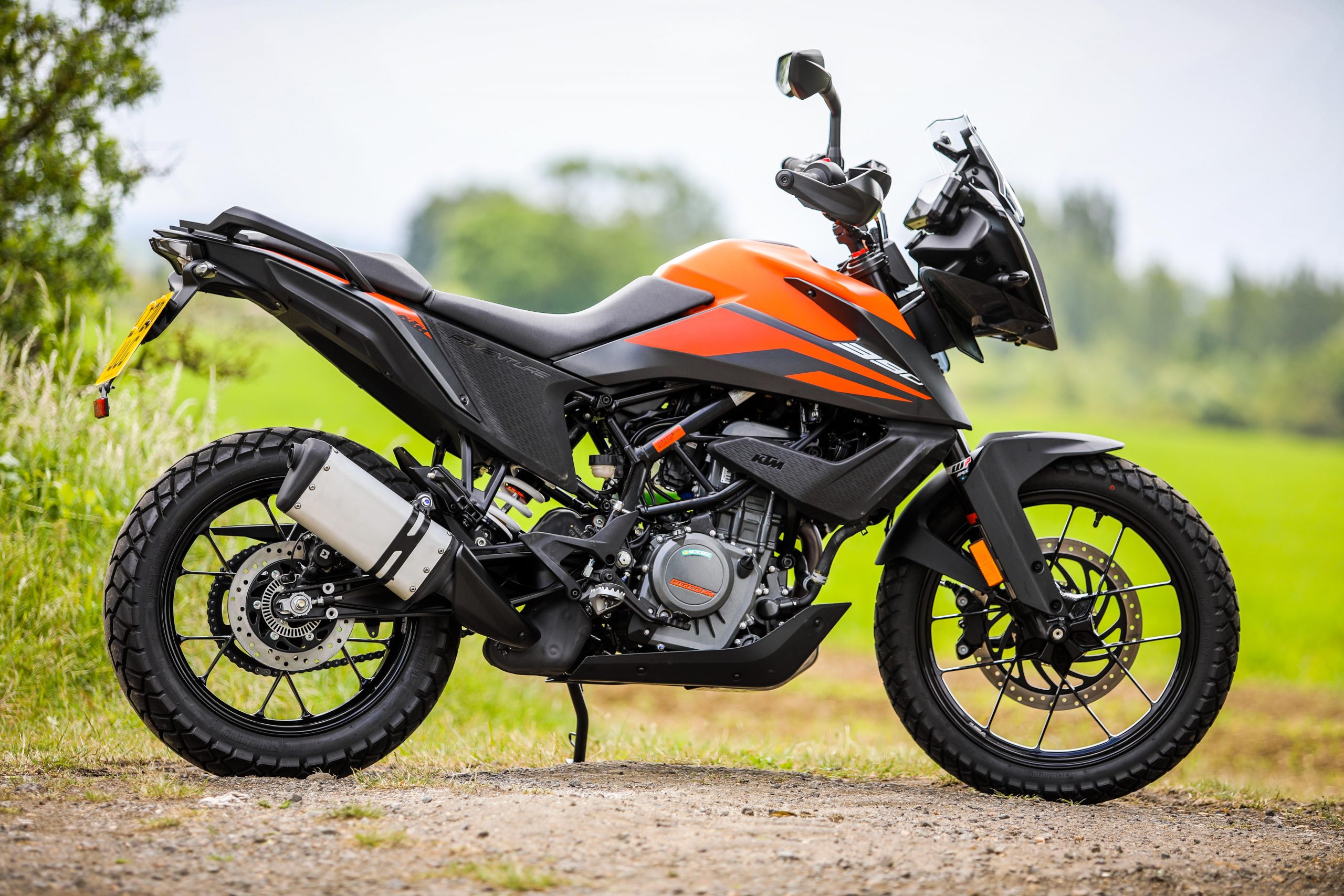 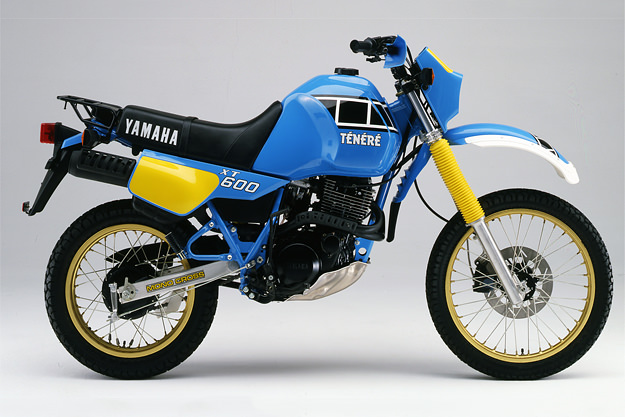 MIDDLEWEIGHT ADVENTURES – BRING BACK THE 600 SINGLE? 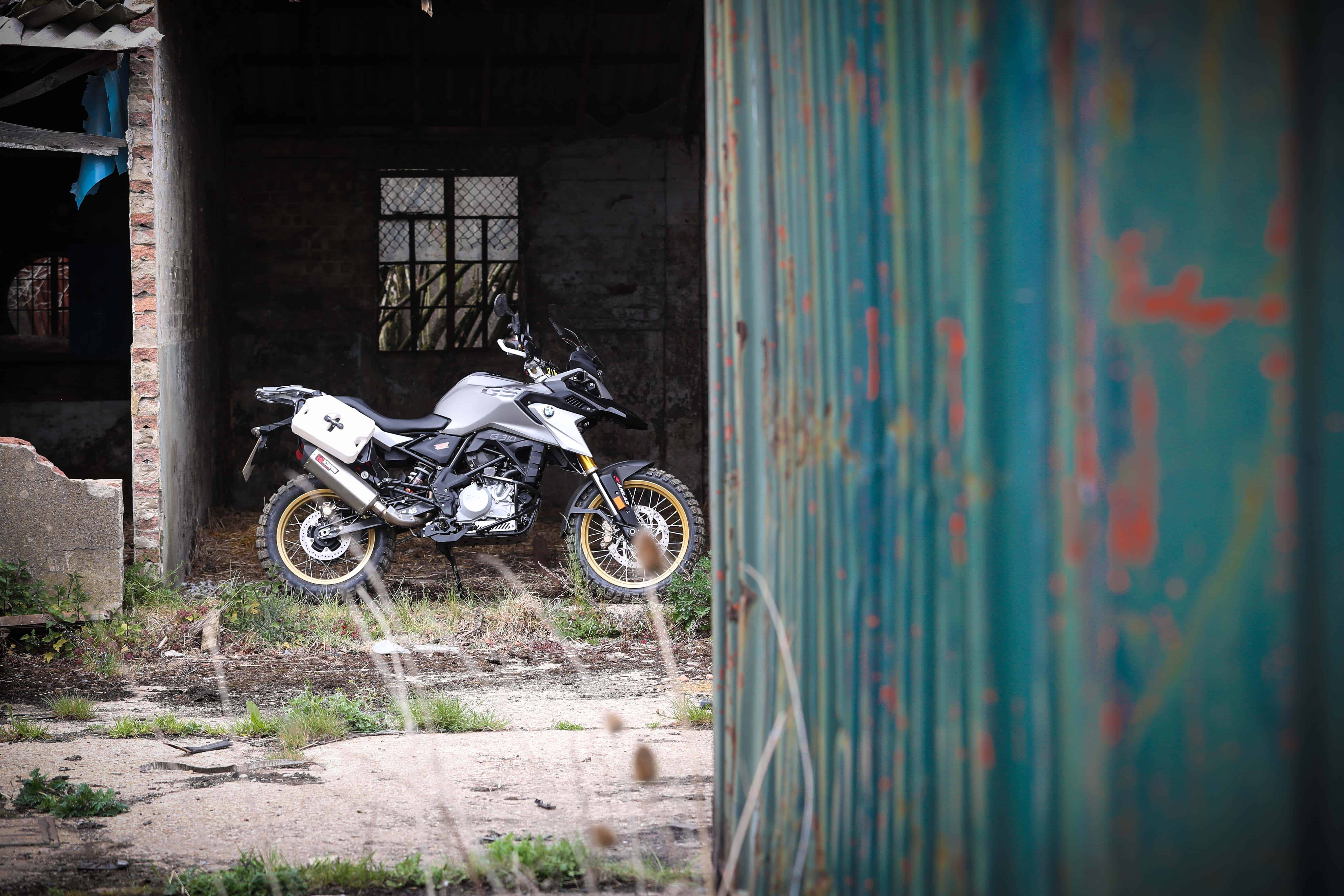