RUST takes the BMW R nineT for a rip around the amazing ocean-sweeping roads of Cape Town, South Africa – and again in the hills and forests of the Schwarzwald of Southern Germany – and finds big love…

It seems only fitting that our first test of what we at RUST term a heritage bike takes me back to my childhood in South Africa, where I first learned to ride. Bikes meant freedom to many a youth in SA, there’s just so much room to roam, and with so much unsealed track or just plain wide-open land then wide-barred dirt bikes were the big attraction. Getting behind the bars of the nineT on a recent visit to the old country rekindled memories of some of those first experiences. The nineT is no dirt bike, but the (apparent) simplicity of the bike, the pared-back styling, the rorty exhaust note, it all reminded me of the good old days. And pretty much that’s what these bikes are all about. 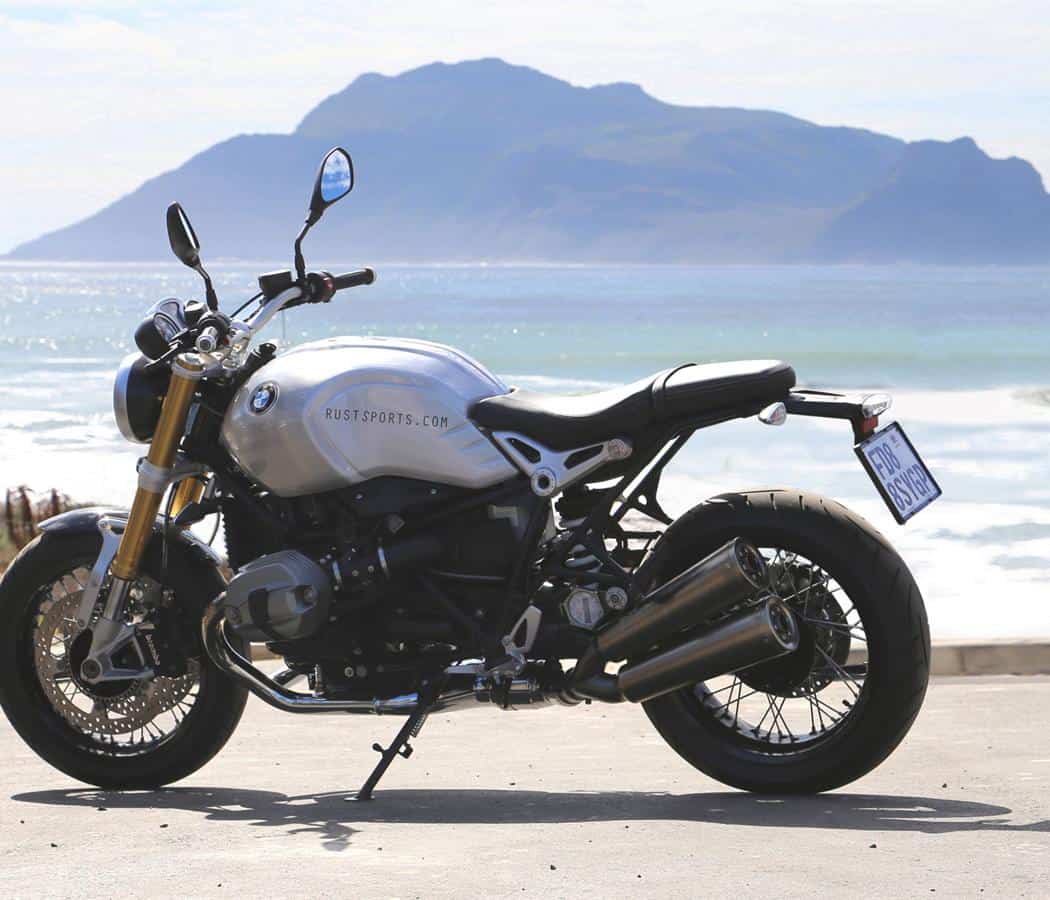 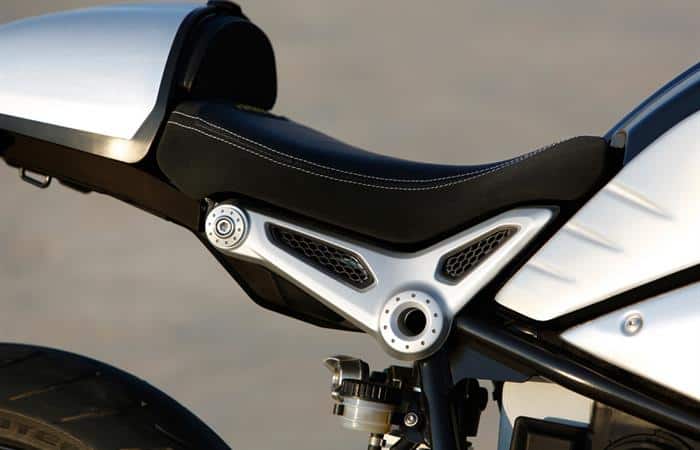 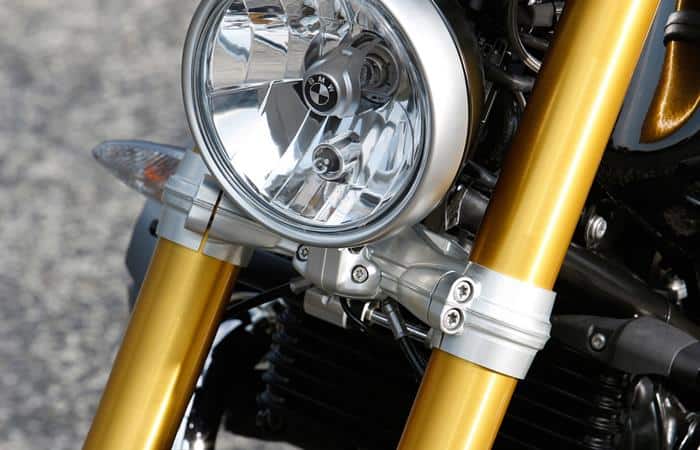 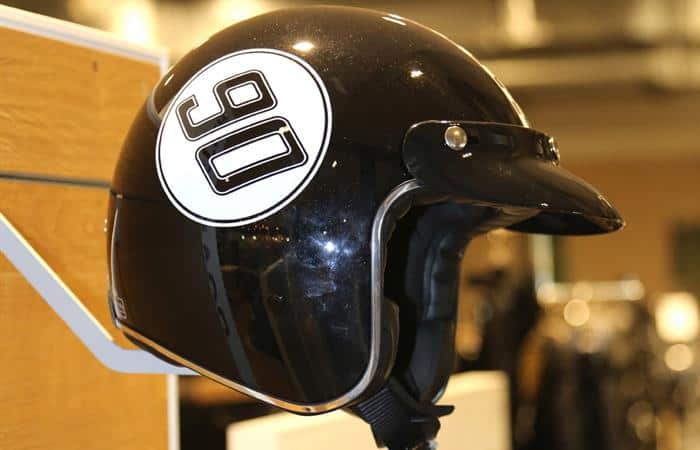 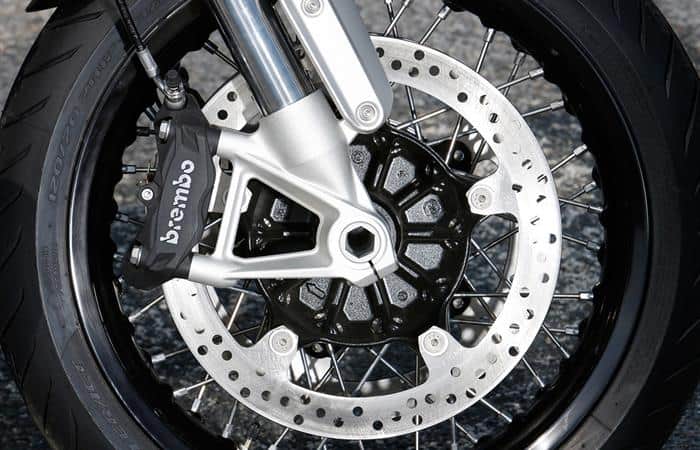 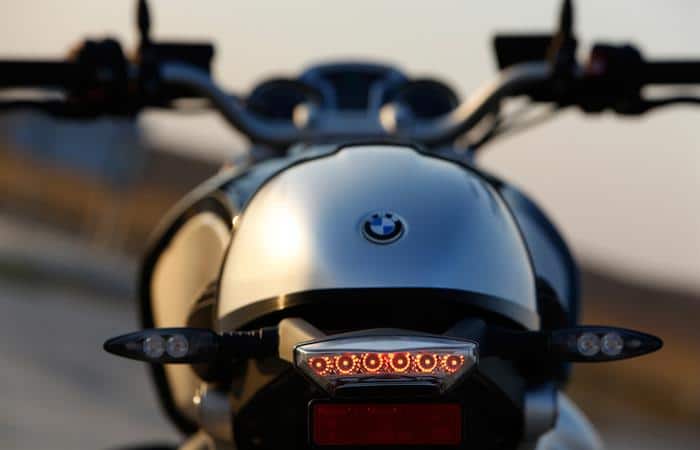 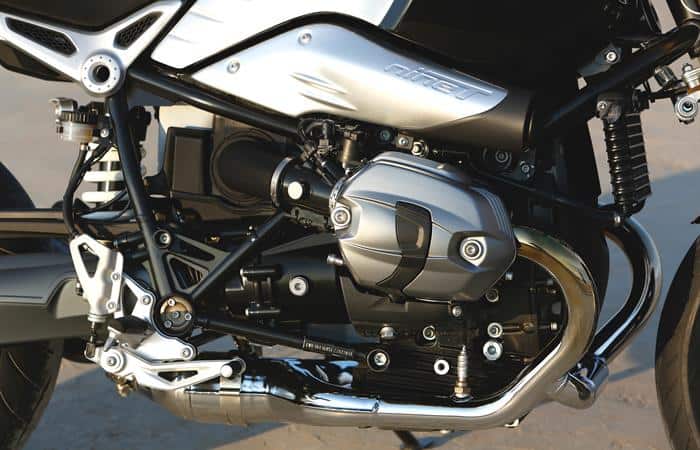 So what is a heritage bike exactly? JB has defined it (loosely) as anything from an genuine old classic bike to a ‘modern classic’ (as Triumph call them) – only in the case of RUST, with a leaning toward off-road. As with all things in life, JB likes to keep things broad-brush, but I can see we’re talking anything from the Yamaha IT490 JB tested a few issues back, to a brand new retro-styled machine such as the R nineT seen here.

If there was any doubt about the nineT fitting the heritage bill this was quickly dispelled by the admiring glances, even discussions, prompted by the bike,over the week I had it for testing in Cape Town. Seems the styling is as much a trigger for the wider public as for the riders themselves. And as for the off-road bias – well, yes, there are the wide bars, the spoke wheels, the cobby workmanlike look of the 1960s scrambler (seen better in the ‘Scrambler’ variant of the R nineT that will be released later this year).

WHAT IS AN R nineT?

Incredibly, for something that still seems so new, the BMW R nineT first saw light at the tail end of 2013, launched into the new-for-2014 show season as a celebration of 90 years of BMW motorcycles, hence ‘nineT’.

The engine is an air/oil-cooled 1170cc unit as seen in the last GSs prior to the latest K50 ‘waterboxers’. But the chassis is unique to the nineT, a steel space frame notably featuring upside-down forks rather than the typical Telelever front end. The design/construction is described as both ‘puristic’ and modular by BMW, meaning it’s a pared-back design allowing for personalisation (using BMW’s own accessories/options or that of others). 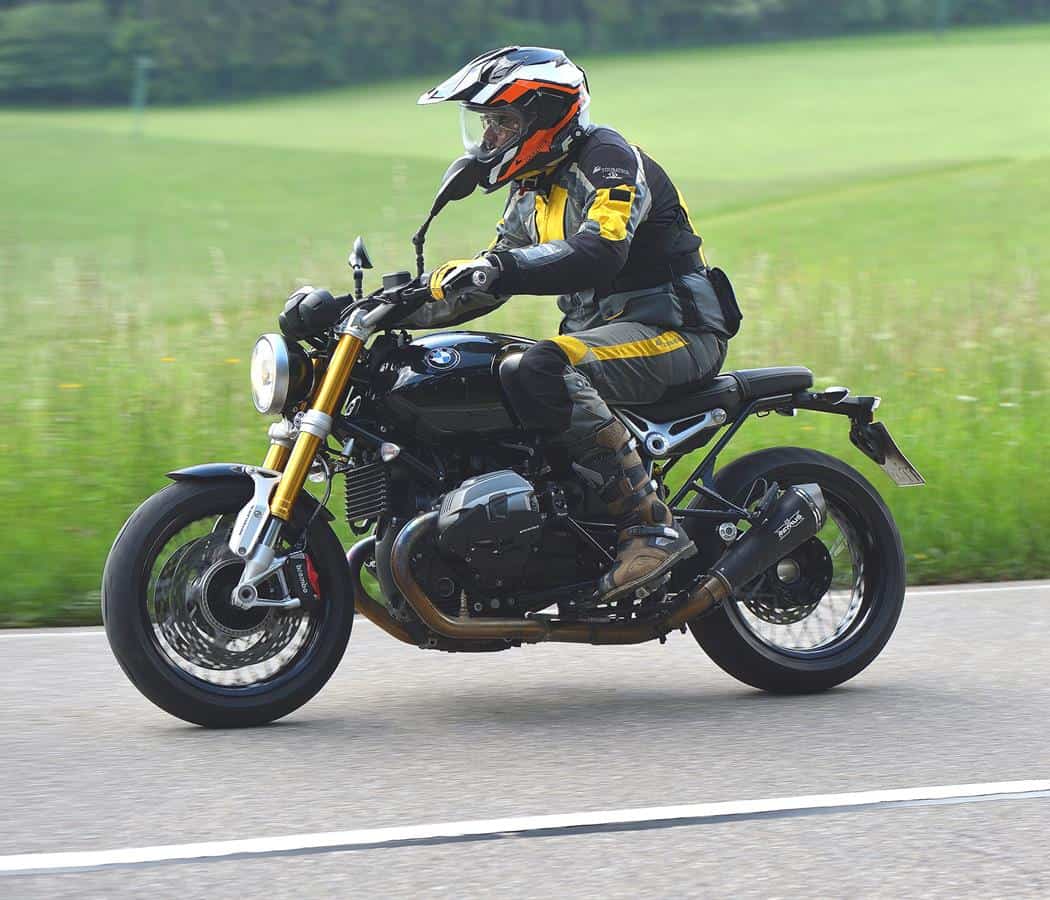 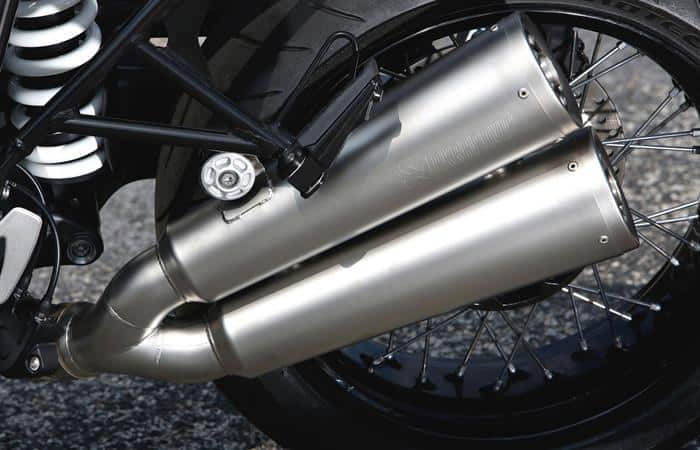 Coming off a KTM 450 EXC the week prior there is an adjustment to be made, but not as much as one might expect. With the 46mm upside down forks and wide bars there’s a sense of dirt bike coming from the front end. With instruments and switchgear kept minimal it looks a bit like a dirt bike once you’re seated, too. And while the seat isn’t anywhere near as high as on a modern dirt bike you still sit in a position more reminiscent of an off-roader, it’s no super-sport.

The bike feels light and nimble and my immediate impressions are that this bike is all quality, simple but quality nonetheless. The cockpit is surprisingly familiar and the clocks are a throwback to the 1980s analogue (needle) speedometer and rev counters. The only piece of modern kit is the simple trip computer and information menu sitting in between the clocks that is controlled by a switch on the left of the handlebars.

The 1170cc air/oil-cooled four-stroke flat twin fires on first touch of the button and the bike growls itself into life. The unique dynamic of the boxer layout can be felt immediately as you rev the bike and with the pistons pushing side to side the bike rocks back and forth. The sideways motion when stationary is not anywhere near as pronounced as it was on the previous heavy flywheel motors and once you’re moving is non-existent.

Now, anyone that’s ever visited Cape Town will have fond memories of the plethora of winding mountain roads that encircle Table Mountain – it’s surely a biker’s paradise. Ideal for a retro-roadster (sorry, JB – heritage bike) such as the nineT. My road of choice is the Ou Caapse Weg (Old Cape Way) a short steep mountain pass that crests Silvermine and drops back down into Noordhoek. I’m tentative at first as I get to know the nineT’s handling characteristics but the bike responds well and true to throttle and directional changes, the Paralever rear shock rides as firmly as the forks and by the time the road flattens out I’m feeling like I’m aiming into the apex of the corners with confidence. 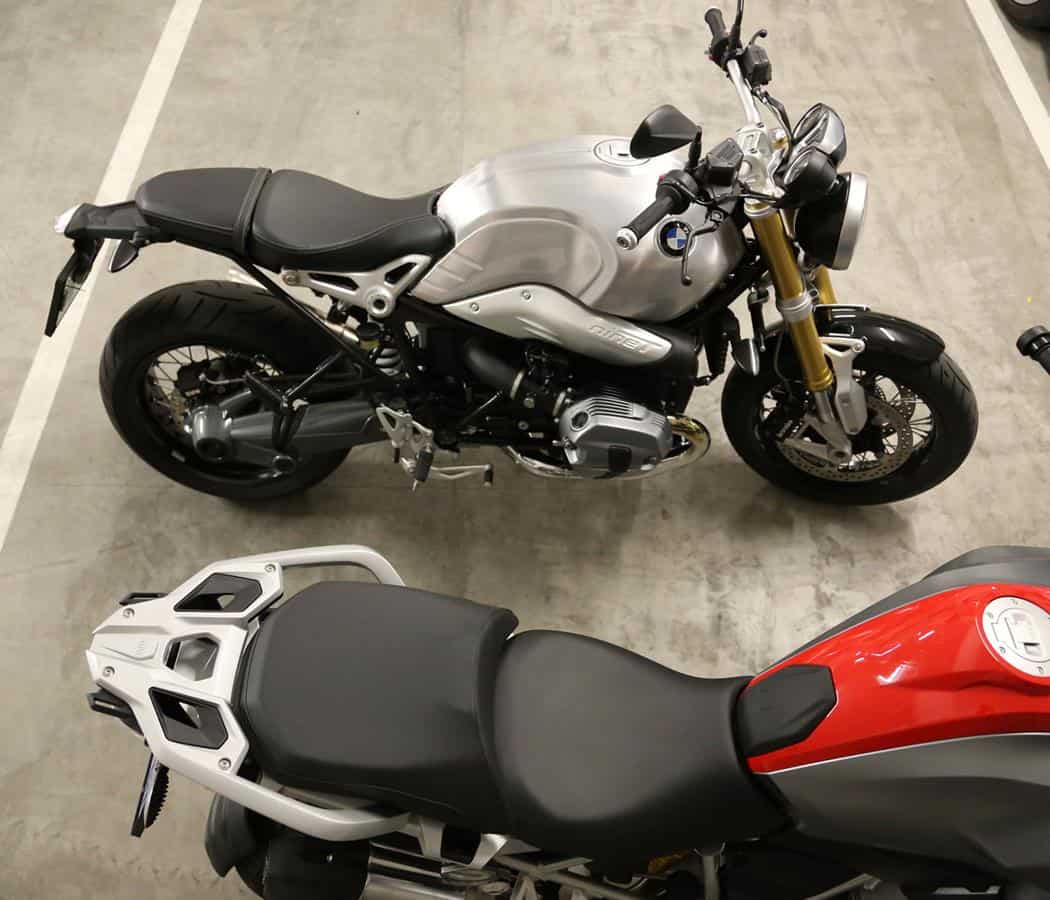 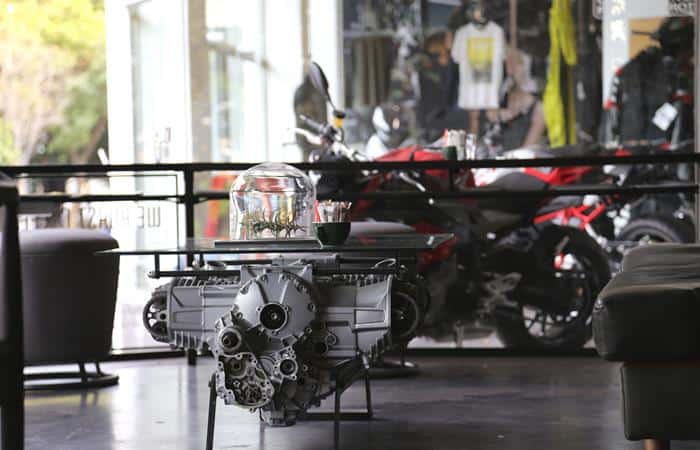 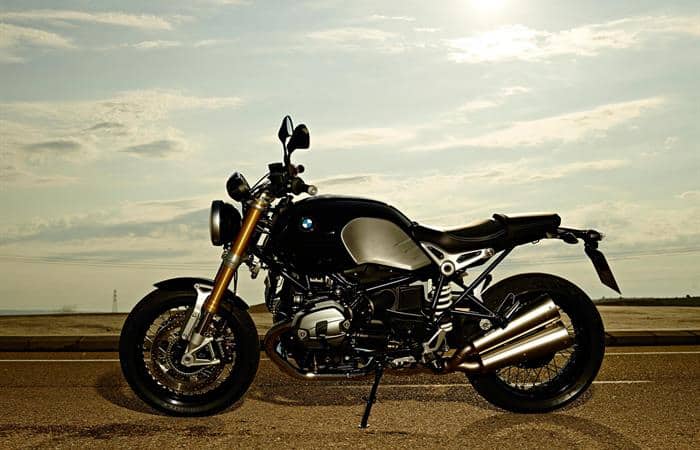 The bike feels lighter than the quoted 489lbs (222 kg) fully fuelled and this combined with the lively motor makes it an awesome bend swinger. The engine in this chassis simply comes alive. I like the solid bank of torque in the bottom to mid, but this last of the air/oil-cooled R-engines also has a honking top end that wasn’t there on the earlier R1200 motors (it having a similar DOHC four-valve top end to that of the HP2 Sport of 2008) so it has a fully developed power curve and wherever you ride it in the rev range it’s good, very good.

The chassis delights; I’d been riding the R 1200 GS in the days ahead of this ride and while that’s one terrific bike you’re never going to scratch around on the tarmac with it in quite in the same way as you can a roadster. And this is the nineT’s forte. The whole chassis set-up simply works. The forks keep the front end true, the Paralever rear is nicely firm, the space frame means nothing flexes in the wrong direction. It’s taught, and while the bike is low, ground clearance isn’t an issue. And if you’re getting in too hot the brakes are ace, and failing that just lay it over, chances are it’s going to cling to the road – it may have old world charms but the capability is present day sports bike.

The nineT is a great scratcher then, but it’s also a bit cruiser, a small bit GS. So it’s a great platform from which to enjoy the scenery. Around the coastal roads I’m taking it in turns to ride fast then look slow. The road around the south peninsula covers around 100km until you meet Cape Point where the Indian and Atlantic Oceans meet.  From here the road heads northwest past Scarborough towards one of Cape Town’s world-renowned surfing spots, Long Beach. The last stretch of road from Long Beach back to the waterfront in the Cape Town CBD winds itself along the Atlantic coast and one of the world’s most spectacular roads, Chapman’s Peak Drive and then along Victoria Avenue past Llandudno (one for the Welshies, there) as its drops into Camps Bay around the headland and through Sea Point before our journey comes to an end.  It’s certainly one bucket list-riding destination. For the nineT, this is the perfect road. 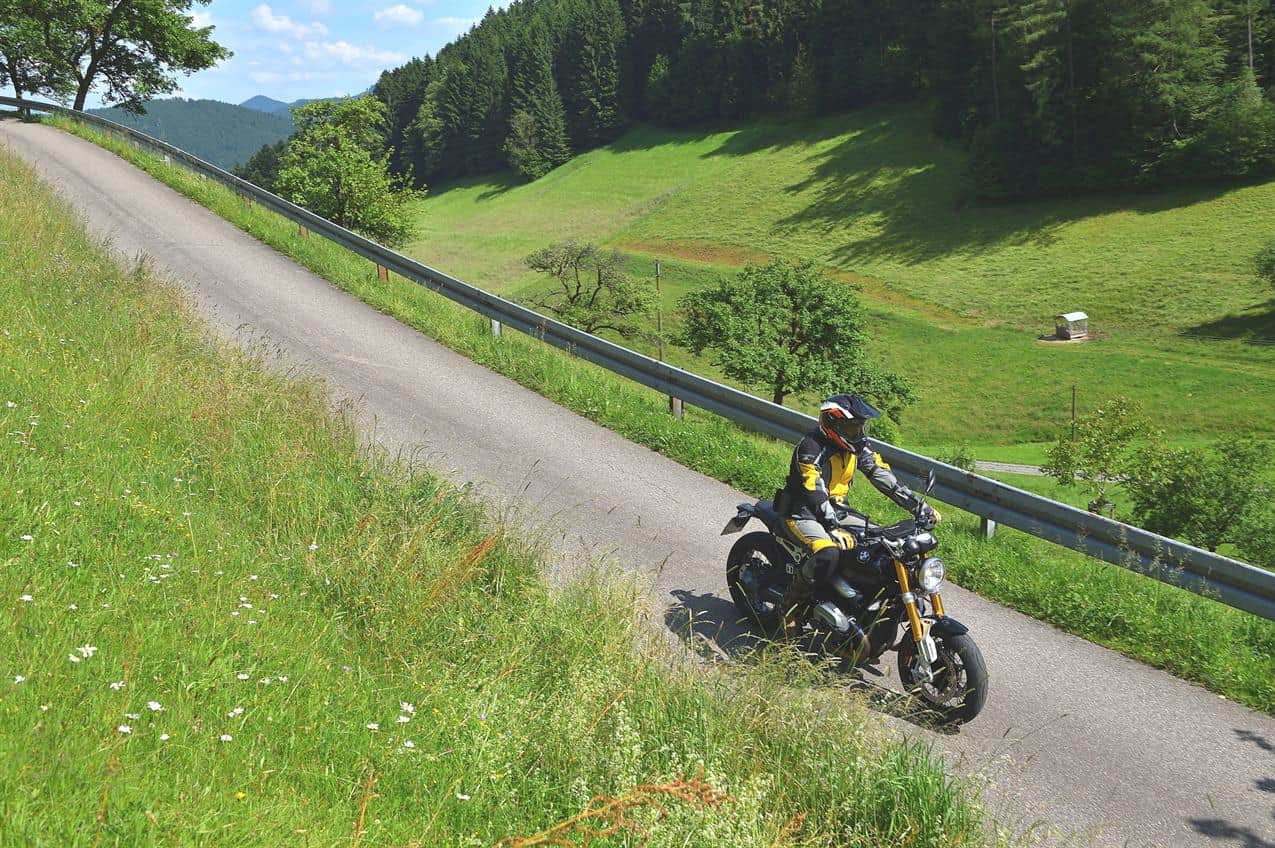 Now nothing in life is in fact perfect and so the nineT has a few personal upgrades I’d like to see added to round off the bike. The footpegs are in my opinion too narrow and I’d bin these for a wider platform. Likewise the rear brake lever would have to go, it seems weirdly out of place, as are the handlebars – which after a while don’t feel to be the correct bend. These are the only two items of the bike that lack the quality evident in the rest of the machine. Don’t get me wrong, they work just fine and I’d be wiling to look past these but if I were to own one these would be the first two items to be replaced.

That’s the beauty lf the nineT, its been designed for customisation and it has one of the most versatile bolt-on bolt-off customisation platforms of any bike on the market as BMW have taken into account the café racer customisation trend and enabled this through innovative design. There is the removable rear frame, enough space for six-inch rims as well as other options, including an aluminium tail cover for conversion into a single-seater, together with a custom rider’s seat with R nineT logo. The options are endless but one of the first items I’d add is the slip-on Akrapovic silencer for throatier sound, custom look and reduced weight. 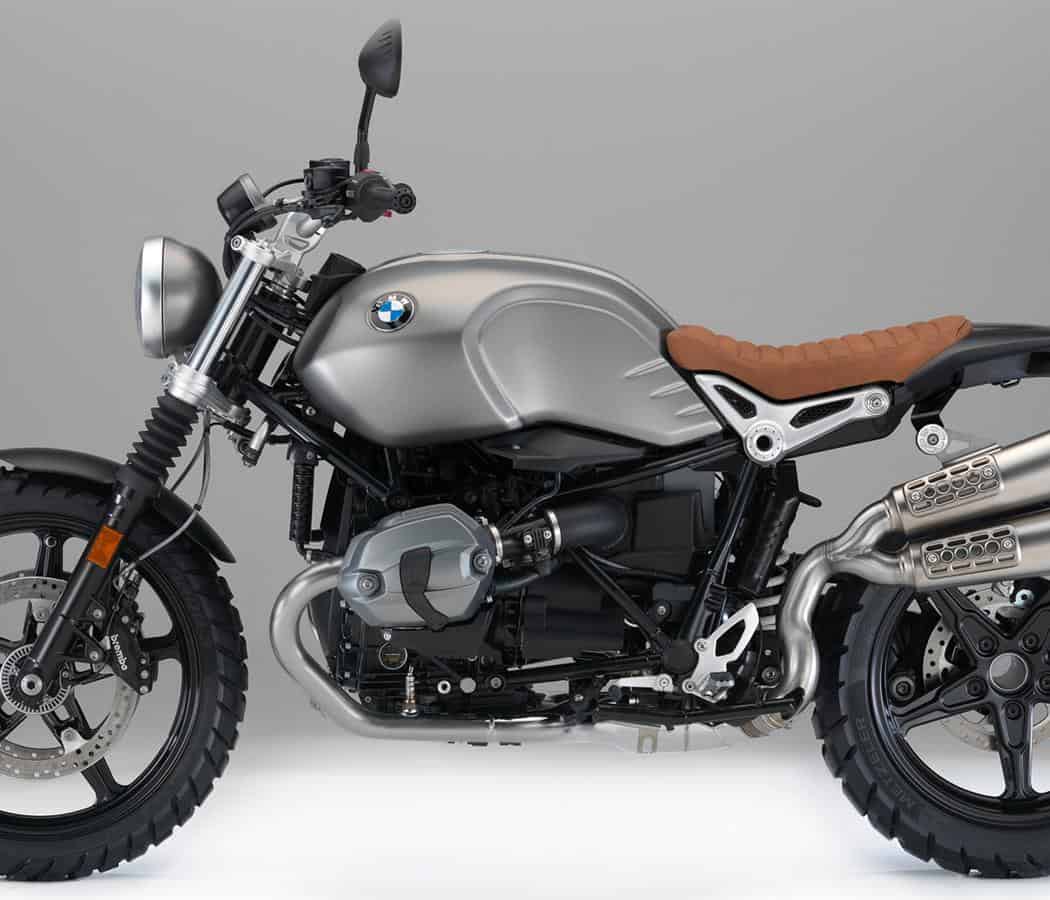 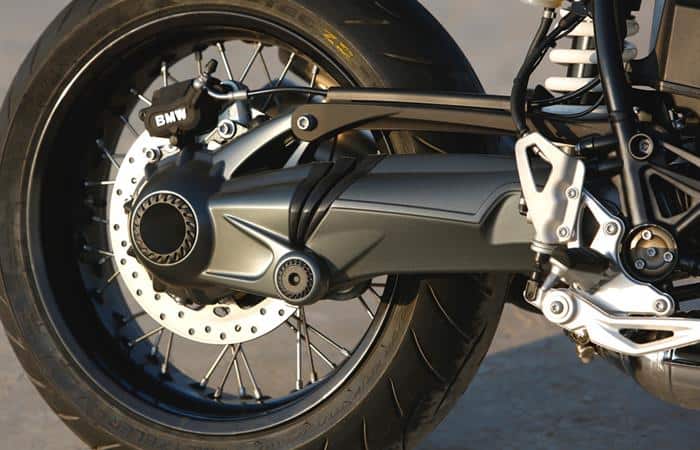 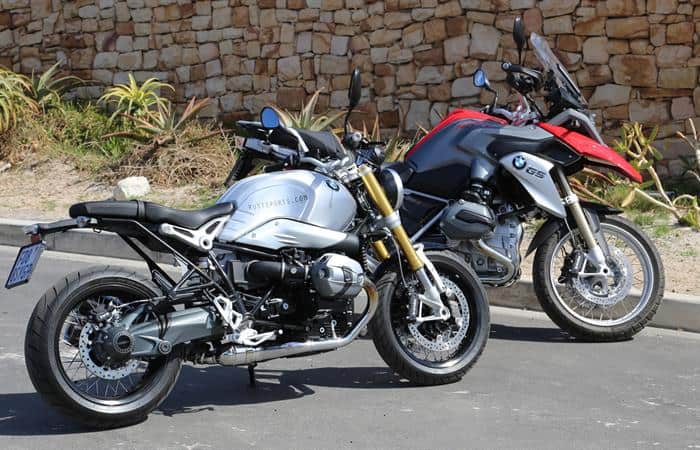 By the end of the journey I’m in love with the nineT. The bike is not only sensationally beautiful but I feel like I’m riding a modern classic and since this was the aim of BMW in the first place I can only say that they have succeeded. What impresses me is the bike hasn’t been designed in a vacuum but celebrates modern technology in a design born in the 1970’s with the R90 S and R90/6.  I’m grateful that the design of the modern R nineT maintains the purity of design inspired by these two iconic machines.

The attention to detail and care given to incorporating classic styling with modern and functional technology can be witnessed in every detail and dynamically around every corner and with every twist of the throttle. There is no doubt that this would be a fun bike to own and is as versatile in use as it is to customise. 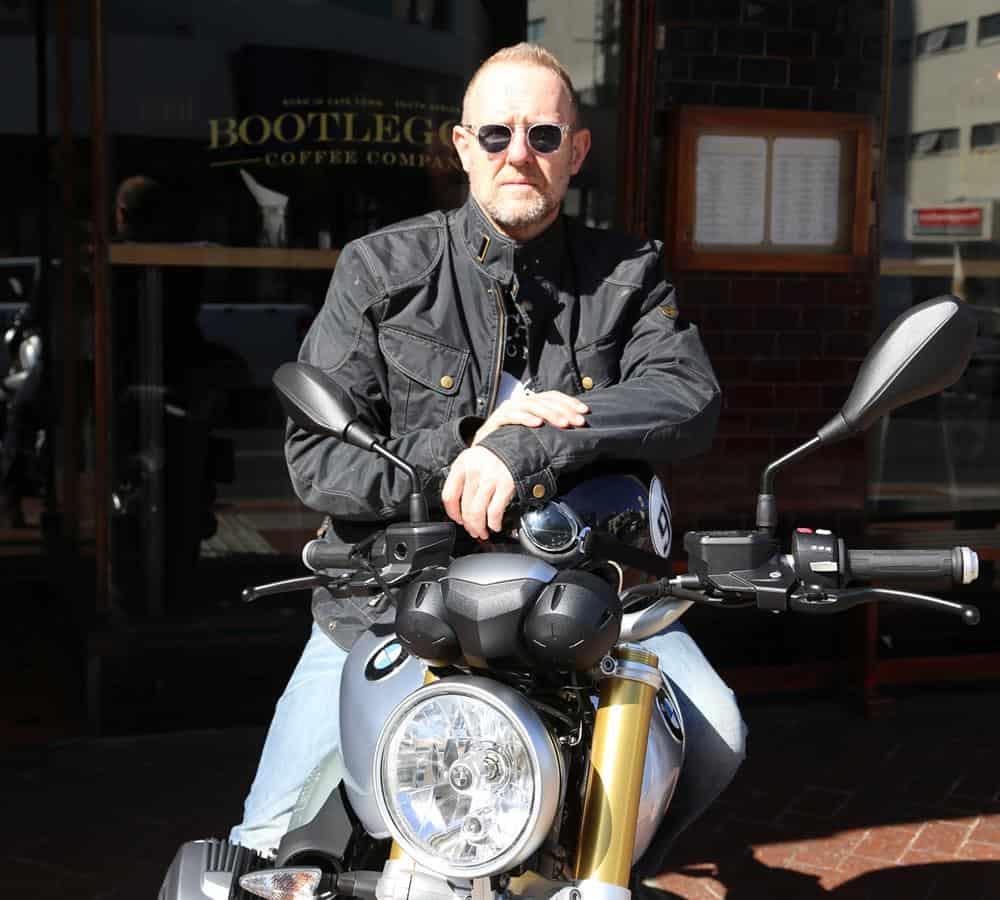 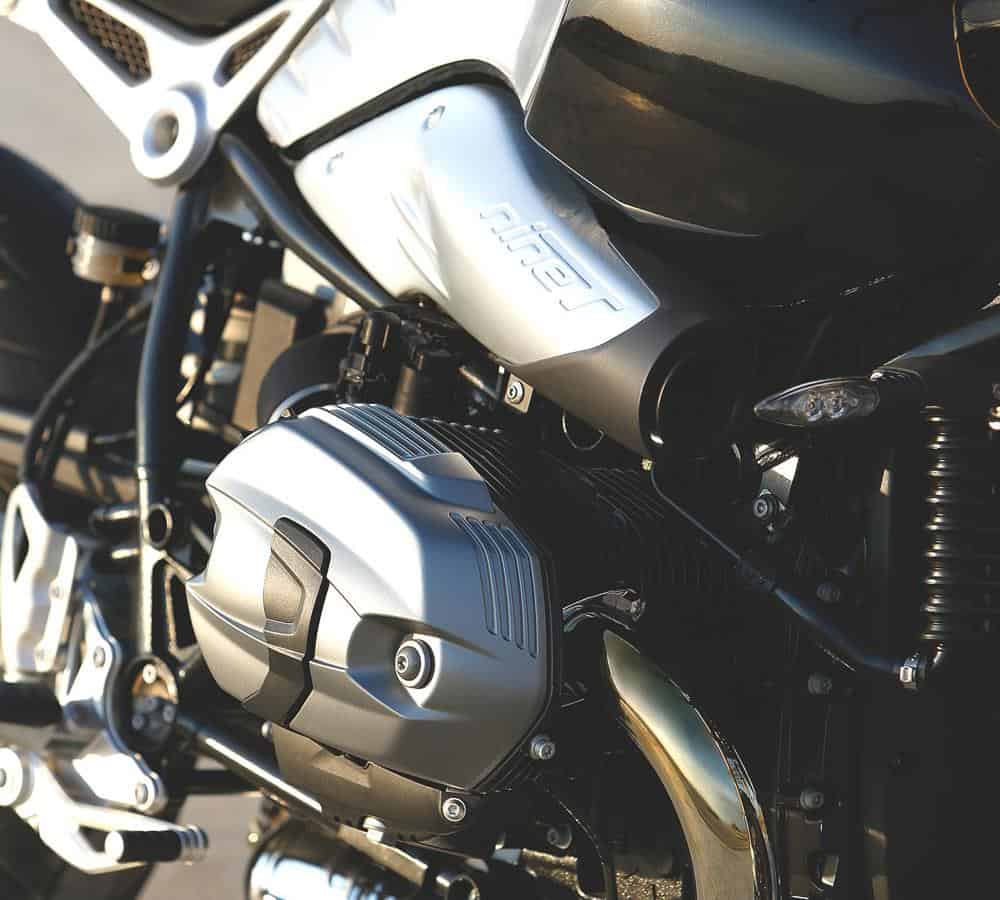 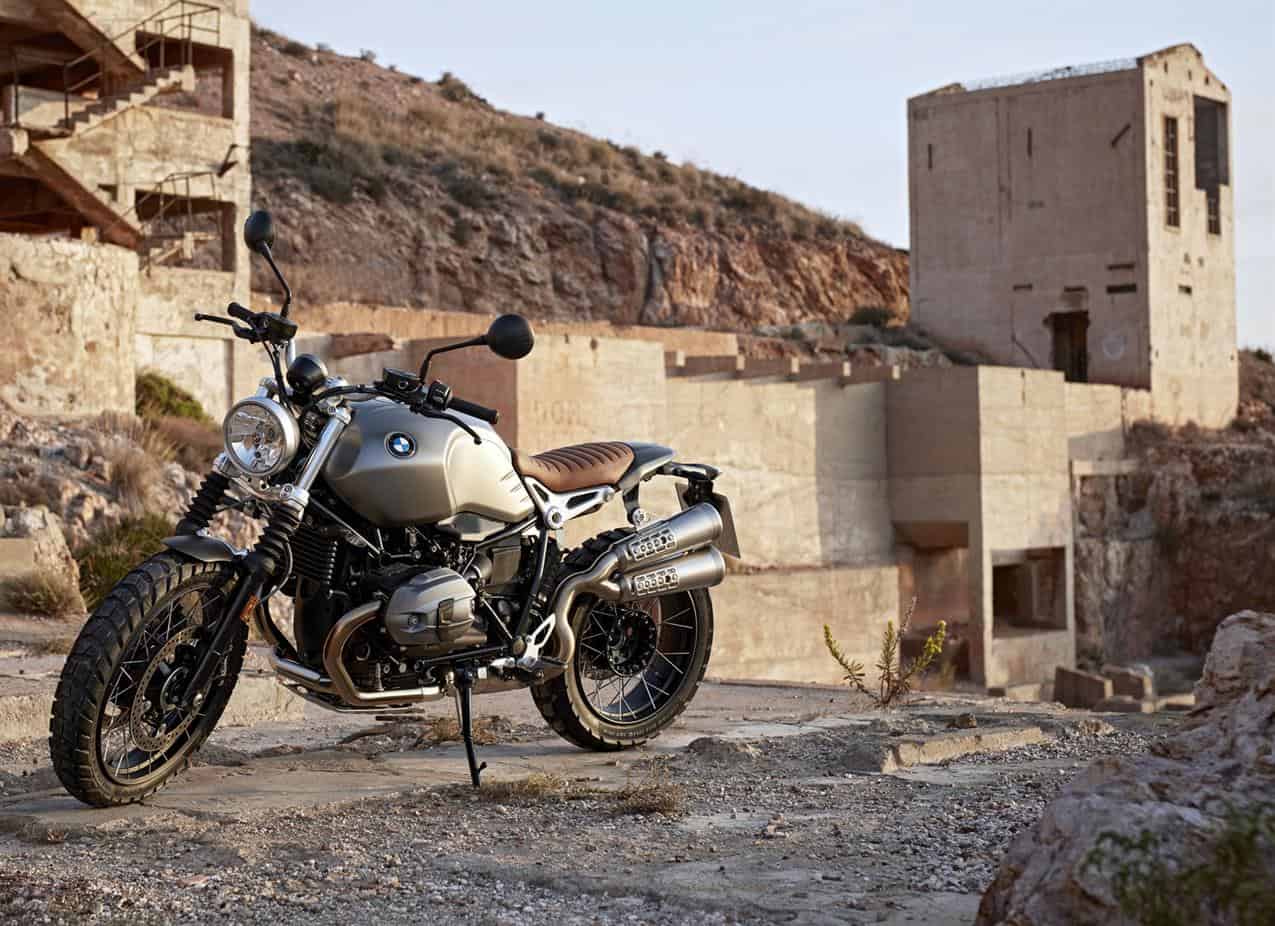