Whilst time has moved on and RUST’s 2012 pick of the best bargain dirt bikes available for £3000 or less is a little dated. For those on a tight budget, there may still be some mileage in some of the bikes listed here…

What constitutes budget biking? Well that depends upon your viewpoint and spending power, but with the majority of new dirtbikes costing upwards of six grand, we reckon a figure approaching half that would make a good starting point.

Yep, around three grand is the amount of money we reckon you now need to spend in order to purchase a good, clean secondhand machine… or at least, one that’s worth having. That’s not to say you can’t find cheaper bikes out there, or that every sub-3k machine is a disaster waiting for an owner. Not at all, but instead it’s a guideline price for finding something that’s still new enough to feel modern, whilst being young enough to (hopefully)  avoid major mechanical problems.

Three grand gets you a bike that should have plenty of life left in it, that’s still pretty competitive (if it’s a race bike),  and whilst it won’t feel like new, it will still feel up-to-the-minute and should be in pretty reasonable nick. Of course, when choosing secondhand machinery, reliability and durability are at least as important as performance and desireability.

The choice of four-stroke/two-stroke depends on your preference and what you’re looking to use the bike for. But remember when you’re considering purchasing secondhand that two-strokes are mechanically simpler and cheaper to work on, and if it all goes ‘Bang’,  the rebuild costs are much smaller. On the other hand four-strokes – when treated correctly – should require less in the way of day-to-day maintenance, and tend to be much nicer to use on the road if you’re trail riding.

Remember too that any modern, serviceable dirtbike has a minimum value of approximately £1500 (below which it’s unlikely to drop, no matter what condition it’s in),  so if you’re buying at three grand or less, you’re never going to lose much money on the deal. For that reason our advice is to set your budget as high as possible. Because the more you spend on a bike, the better it will be. And not only will that reward you in terms of reliability and subsequent running costs, but also in the way the bike feels and performs when you use it… 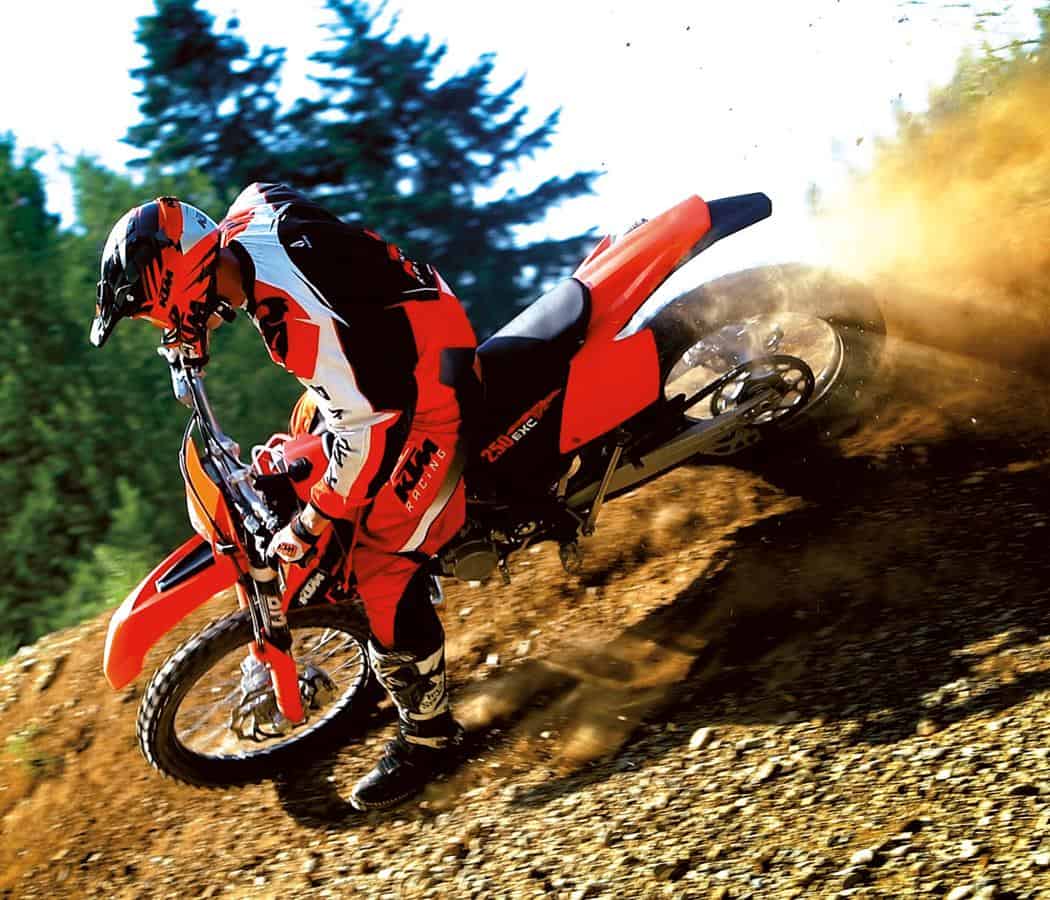 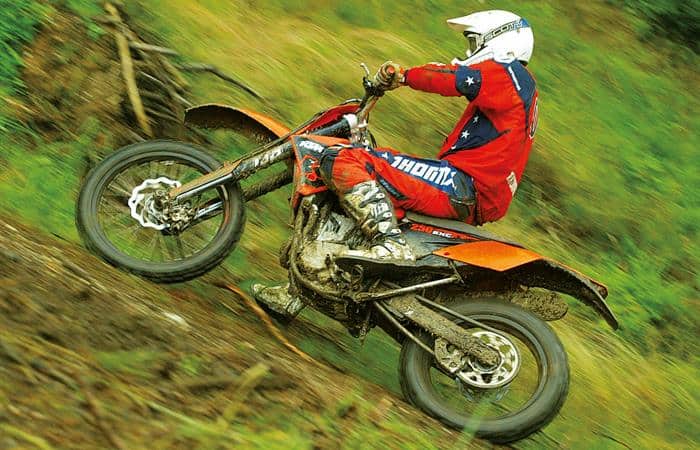 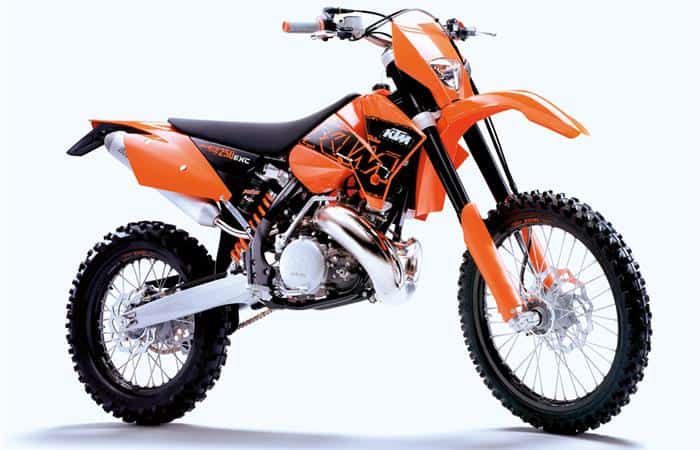 What’s good about it: You want something fast, light, easy to ride, durable and ultra-competitive to go racing with, right…? You want a 250EXC! Some things in life simply can’t be bettered, and a great 250 two-stroke is just about the perfect enduro weapon. Whether you’re riding proper timecard enduros, racing sprints or just having fun at your local hare & hounds race, you simply can’t beat a good 250 stroker. And it’ll even double up as a sporty trail bike too.

What makes the KTM so good? Well there’s the incredibly tractable engine that manages both low-down grunt AND an explosive top end. There’s a great riding position that puts you at the front of the bike where you feel in control, and of course it’s got the best-turning chassis in the business. Add to that the superb White Power suspension, ultra-light weight which gives it lightning reflexes and some seriously good build quality and you have a recipe for a brilliant secondhand dirt bike.

Within our budget we’re looking at bikes which are at least three-to-five years old and it’s worth knowing that the whole look of the bike changed in 2008 with completely restyled plastics – switching from a predominantly orange colourscheme to a black tank and black/orange mix. Stylistically we’re not big fans of these ‘black’  models, so would suggest you save a bit of money and opt instead for one of the last of the 2007 models.

What you get: When it comes to buying secondhand race-bikes, you can expect it to have had a fairly hard life. That’s the nature of the beast. Three grand gets you something that’s likely to be on its fourth or fifth season, and even if it’s only done two or three seasons of actual racing, it will still be in need of some freshening up during your tenure. Fortunately top-end rebuilds are pretty cheap on a bike like this but if it needs a bottom-end rebuild too then that could be anything up to £500. KTM spares are relatively inexpensive and widely available so that’s good, but you can still expect a slightly higher level of expenditure than on a bike with more modest performance. Nevertheless once up to condition the KTM will impress you with its dynamic handling and performance, and should still offer reliable racing at fairly minimal cost. There may be cheaper ways of going racing, but none will be as much fun, nor as competitive as a good condition 250EXC. 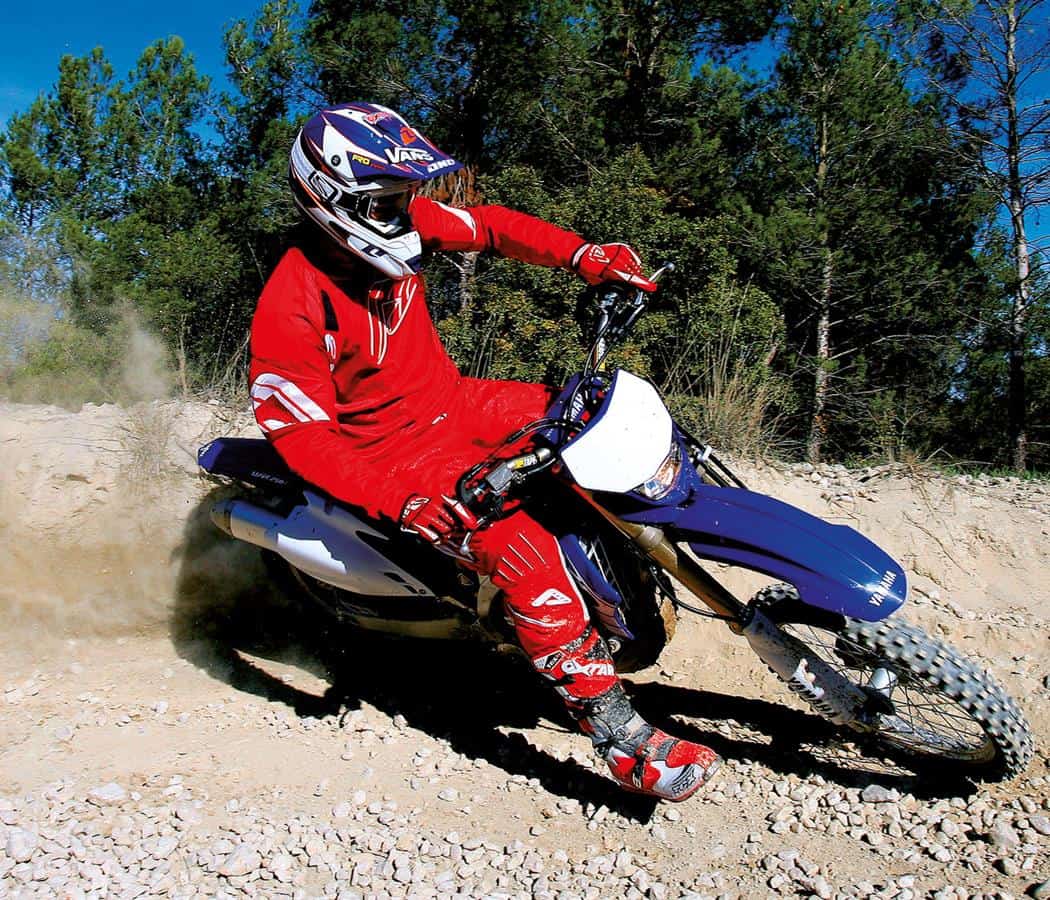 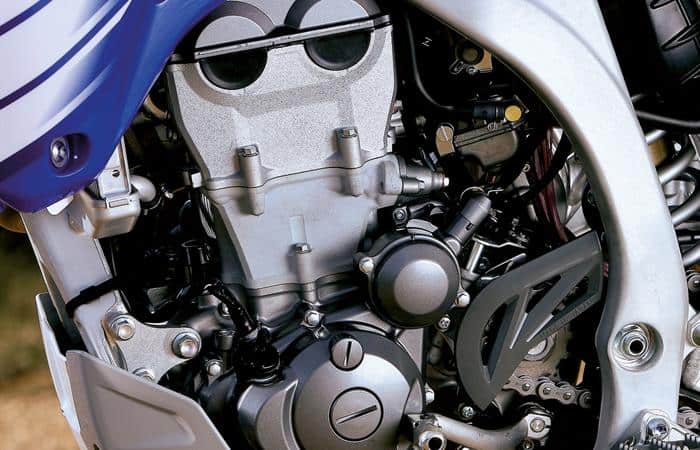 What’s good about it: Yamaha’s small-bore WR-F has been around since 2001, and yet in the right hands it’s still capable of winning races at every level. To the clubman and/or occasional rider it’s obviously important to be riding something competitive… but not as important as the fact that the WR-F is supremely easy to race, as reliable as an anvil, and as forgiving as a priest at a confessional.

Turn up at any event and there will be scores of ‘em in the paddock. That’s because loads of other riders already know that the WR-F is not only fast, fun and frugal, it’s also very handy for the types of woods-based races we get in this country. It also means there should be a reasonable choice of bikes in terms of buying secondhand – not to mention a ready market to sell back into afterwards.

What you get: A well-suspended, well-sorted, rugged machine with no obvious vices or problems. In terms of the motor, the Yam’s high-revving, five-valve engine is a strong performer that’s good for 30-odd horsepower, but (and this is the reason why so many clubmen love it),  it also offers the best torque in class, and that makes it easier to ride than the equivalent KTM or Husky. And aside from a few well-documented carburetion glitches in 2005/6, the bike’s reputation for durability is well founded. In terms of spannering there’s very little required apart from regular oil and filter changes and the occasional valve adjustment. In 2007 the WRF gained an alloy frame and a step-up in terms of quality, and whilst there’s nothing much wrong with the old steel-framed bikes, the alloy ones definitely look smarter and feel more modern.

Our choice: 2007 alloy-framed model. Expect to pay about £3k from a dealer, a bit less privately. Alternatively a KTM 400EXC. (Price quotes from 2012) 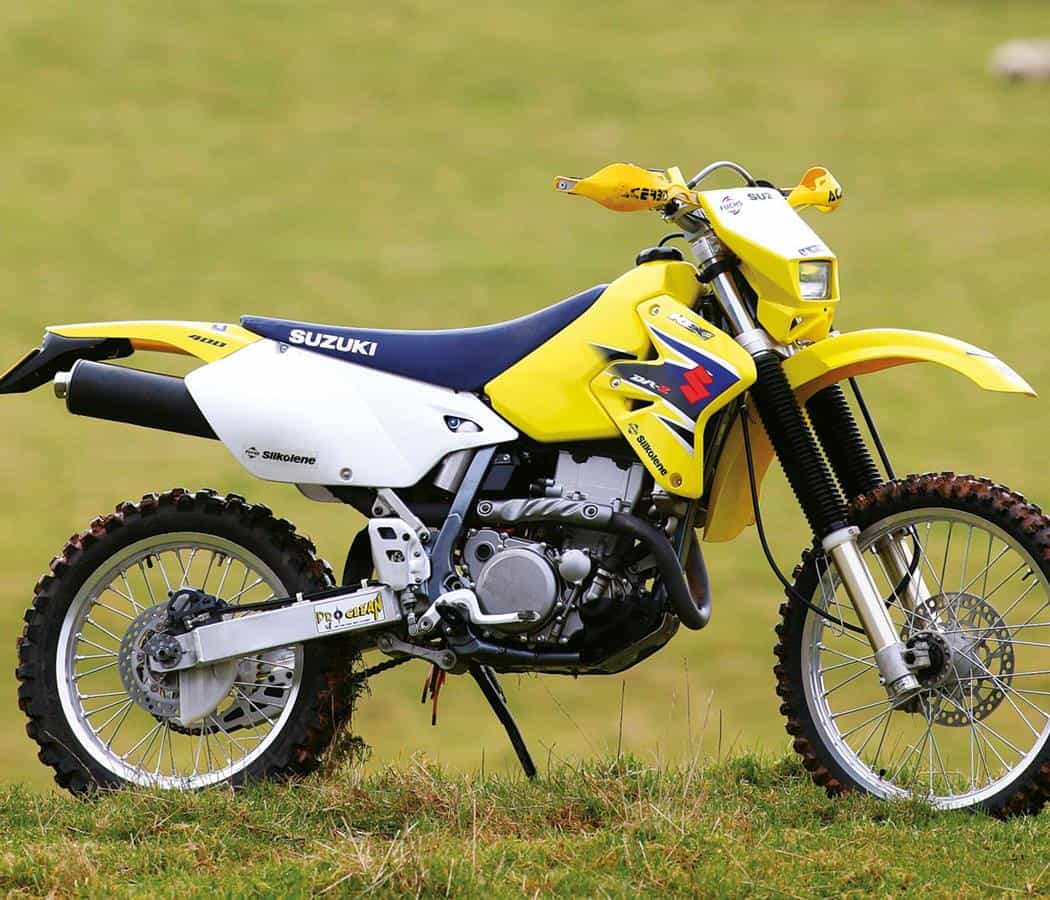 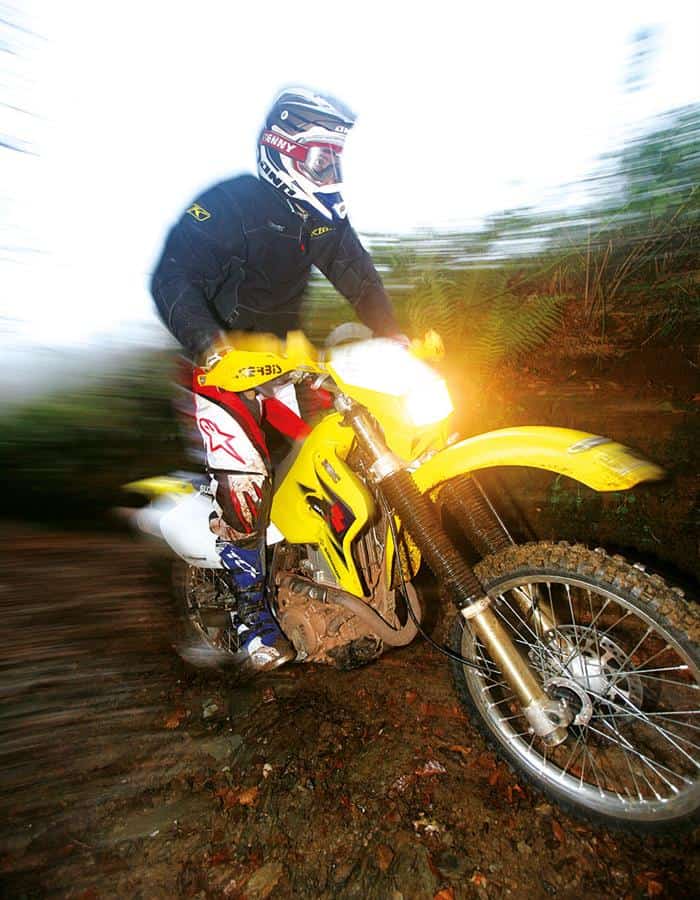 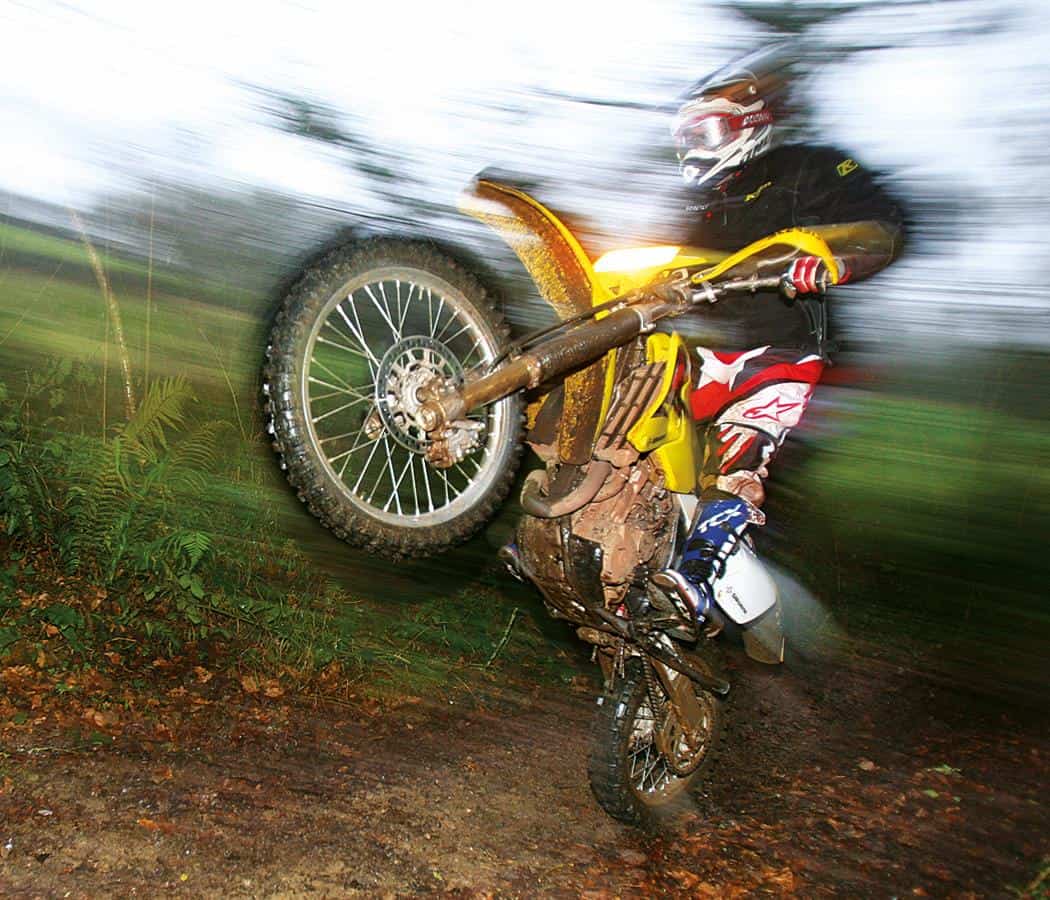 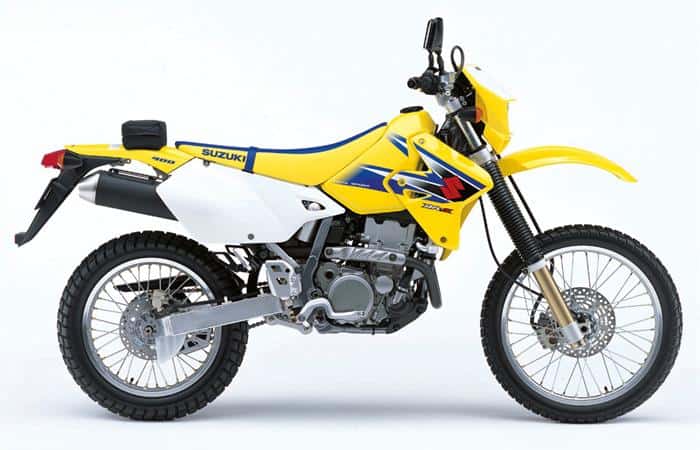 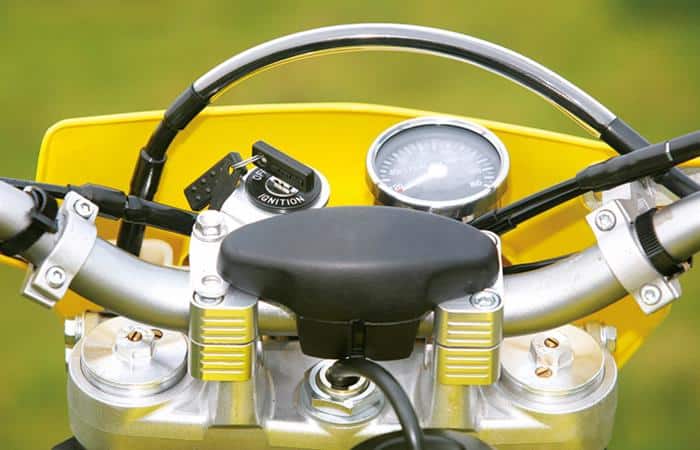 What’s good about it: Okay, it may not be everyone’s first choice, but the DR-Z selects itself for the title of best budget trailie by dint of its proven track record. The ‘Zed’  might not be the last word in current trailbike design, but it’s as strong as an ox and will never let you down provided you keep it (occasionally)  serviced. What’s more the DR-Z was once the UK’s biggest selling trailie, so they’re still fairly plentiful up and down the land and can be had for knock-down money if you search around (you can find well-used early ones for less than a grand).  And whilst there are better trailies out there, none of them can quite match the Suzuki’s blend of price/performance/reliability/availability/resellability, which is why it still flags up on our ‘budget’  radar. Launched in 2000 it was dropped from Suzuki’s range in 2006 then reintroduced again for a couple of years in 2009 at the bargain price of just £3900.

What you get: A rugged, purposeful and practical trailie with plain-Jane good looks and one of the nicest four-stroke engines ever to power a dirtbike. This thing has midrange grunt available just off idle, all the way up to the top-end! In other words it’s a torque-monster with a gorgeous mellow (but still quite powerful)  twin-cam engine. What’s more the motor is lovely and smooth for the road and has five, well chosen, ratios to play with.

Suspension-wise the Suzuki is good rather than great, but more than capable of being pushed fairly hard. You can race them if necessary but they feel a bit big and bulky by comparison with modern tackle. Nope the DR-Z(E)  is really just a great all-round trailbike that offers versatile and reliable performance at sensible money. 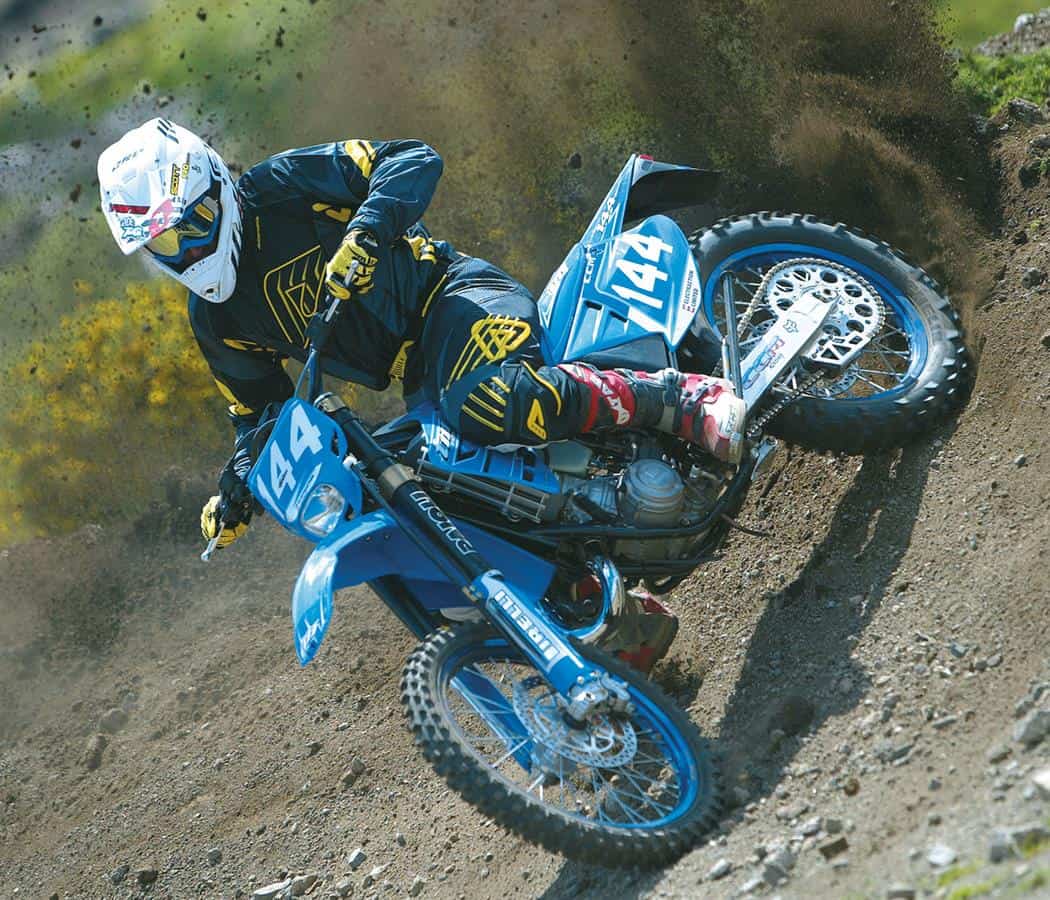 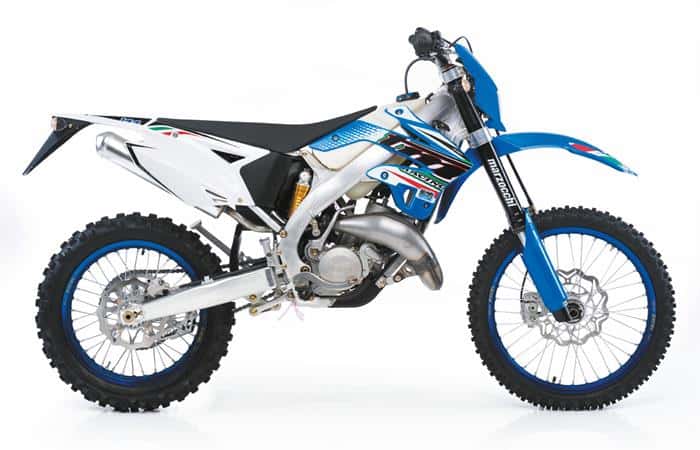 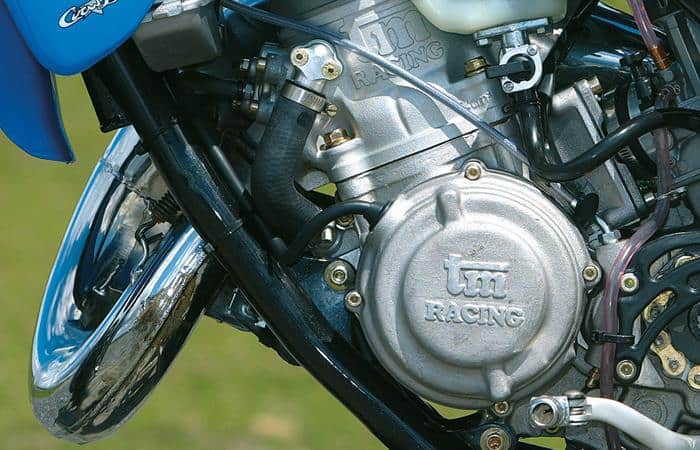 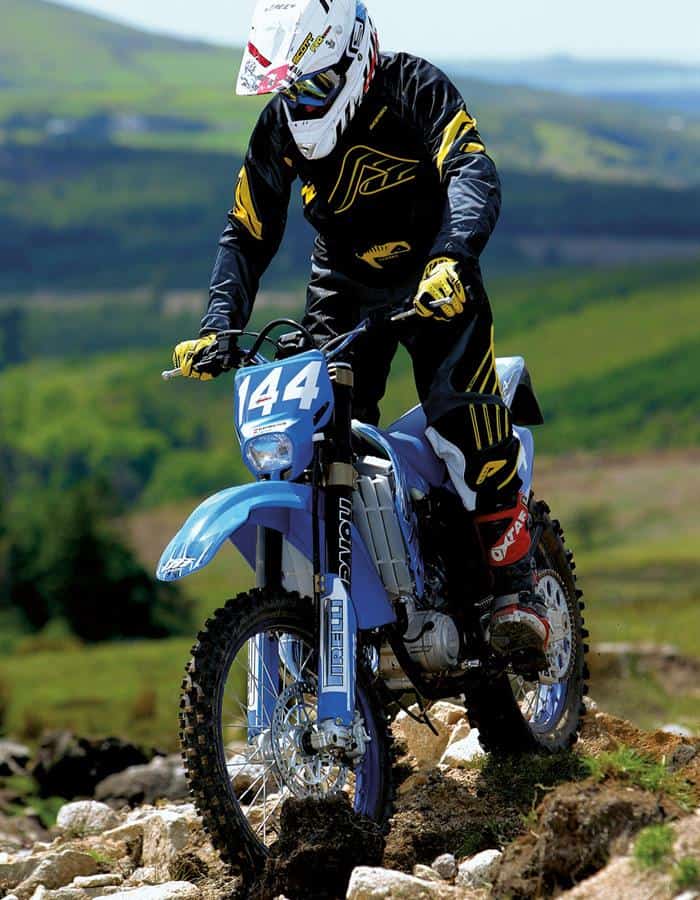 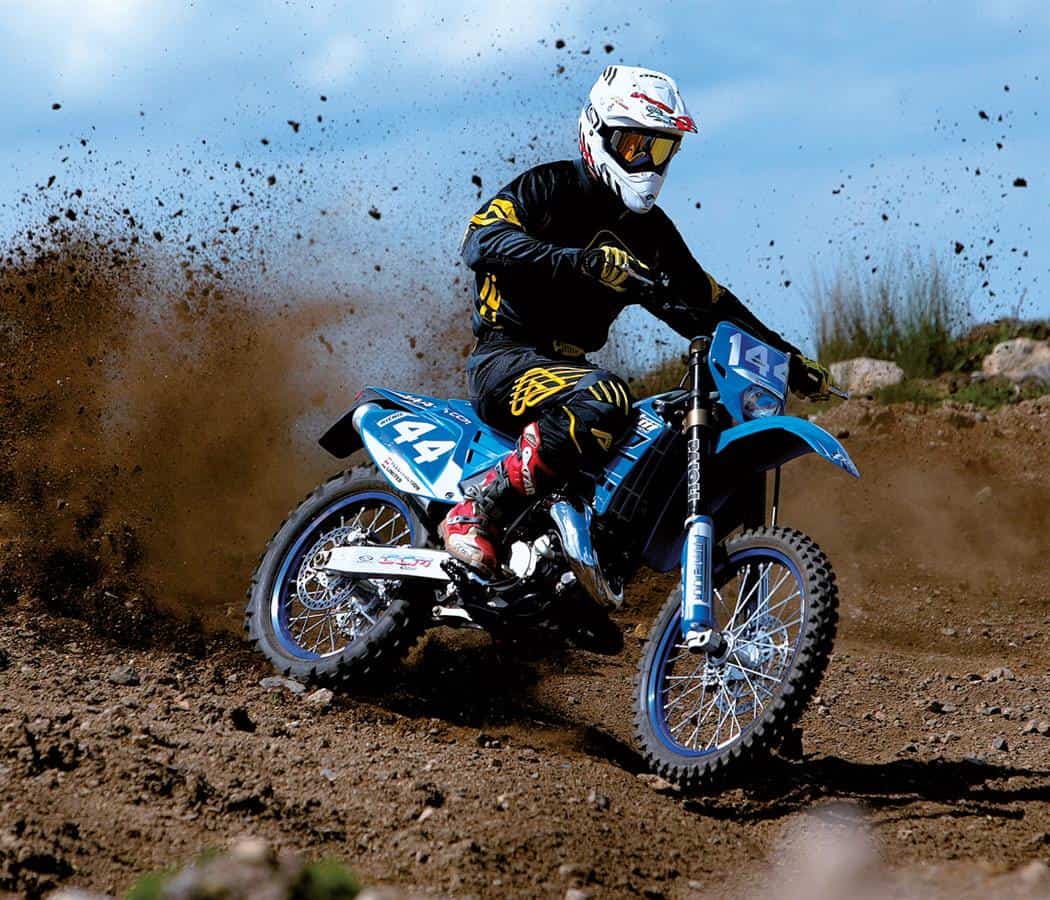 What’s good about it: When it comes to buying secondhand ‘exotica’  it’s generally a case of ‘buyer beware’,  and for very good reasons… You may be able to pick up an ultra-cheap VOR or Kramit, but getting hold of spare parts won’t be anywhere near as painless. However our choice of bike is much more inspired.

TM’s 144 is not only an awesome little machine, but it’s still a current model. What’s more it’s the only factory-built enduro bike of this capacity (it’s not just a big-barrelled 125 or a downsized 250, either),  and comes with all the sexy little detailing you’d expect of a machine like this: billet triple-clamps, hand-welded alloy beam frame (on the later models),  and a genuine feeling of craftsmanship in the design and manufacturing process.

And rolling up at an event and unloading one of the blue machines off your van or trailer instantly singles you out as one of the dirtbike cognoscenti.

What you get: Great handling, great suspension (Marzocchi forks and hopefully Ohlins shock)  and a cracking little motor that punches out a fair spread of power for its modest capacity. Best of all you get ultra-light weight that contributes to the quick (yet stable)  handling, as well as the bike’s ease of use. In fairness, the TM 144 is perhaps not quite as user-friendly as something like a KTM 125EXC for instance. It’s really aimed more towards the expert or experienced rider who’s happy to tinker with suspension set-up, play with jetting, and spend their time twirling the spanners. It’s not the sort of bike you can simply leave dirty then expect to dig out of the shed and go racing again. On the other hand… it’s a TM! In your garage! And your mates will all want to have a go. Your biggest trouble will be finding one! 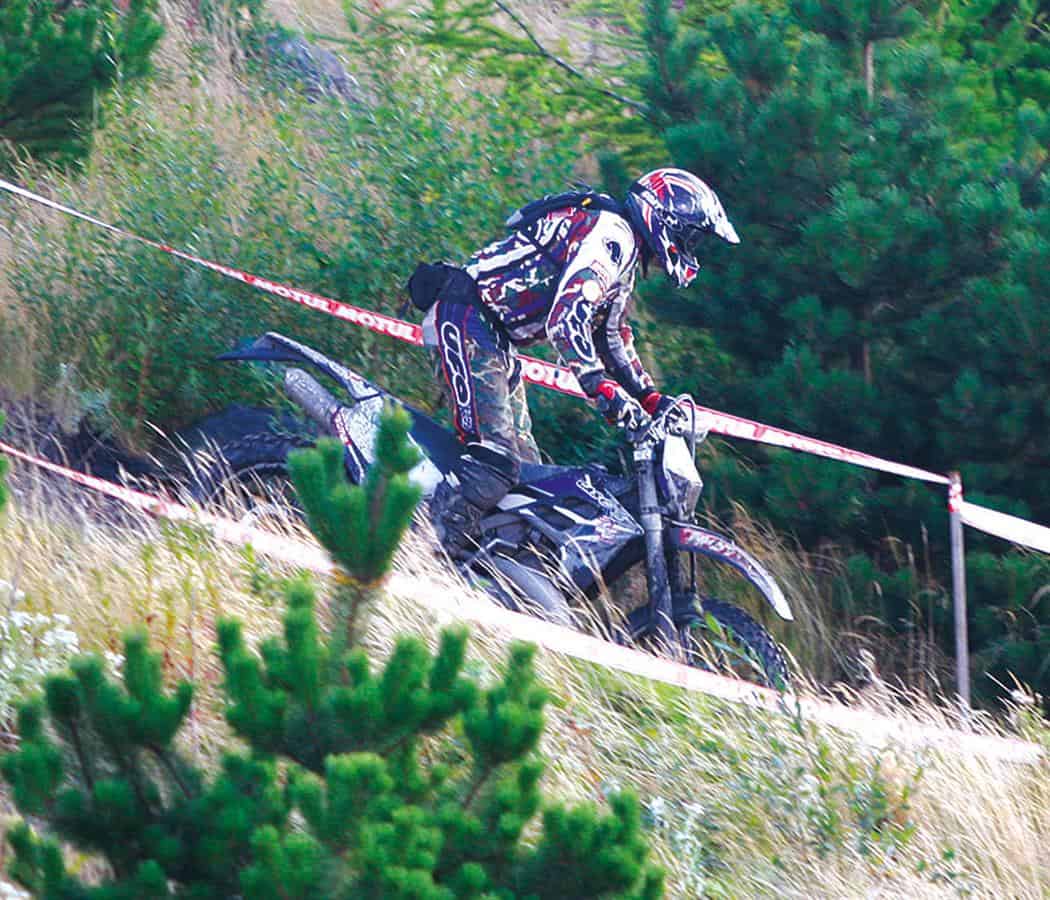 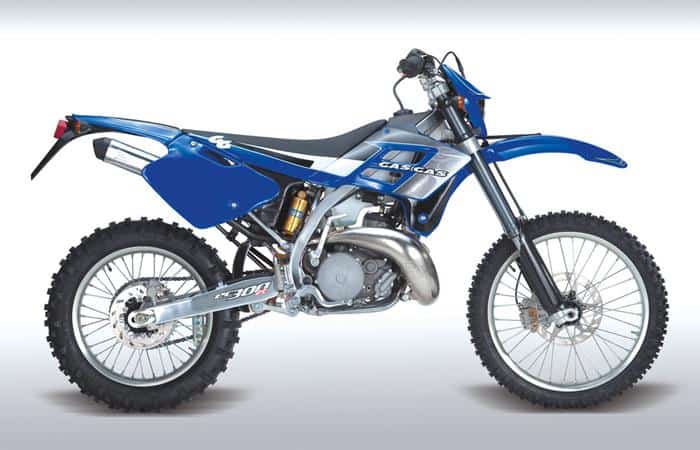 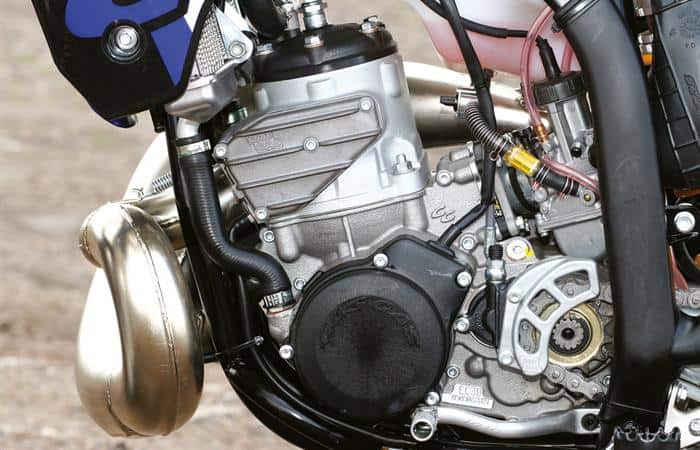 What’s good about it: Well it’s a great trail bike and a good enduro bike all rolled into one, and unless the previous owner was a certain Mr Juan Knight, it’s highly unlikely to have been thrashed mercilessly. The 300 is basically a do-it-all dirt bike that appeals to both the racer and trail rider alike. Why? Because it’s fun! It has skip-loads of torque, a well-spaced six-speed gearbox, decent suspension, and it’s fairly light in weight. That makes it dynamic to ride, relatively easy to pilot (it’s still a 300 though so it’s got plenty of power),  and at the sort of money we’re talking about – we’d only pay a grand for a 2002/03 model – it’s a helluva lot of bike for the buck.

What you get: With a bike of this age and this kind of price it’s gonna’ be scruffy: shonky plastics, bent levers, and probably sacked-out suspension will be the order of the day, but underneath you should be buying something that’s essentially sound (otherwise don’t buy it for gawd’s sake).  Parts for Gassers are relatively cheap (which is probably just as well)  as gearbox issues are not unknown on some of the old models. The engine will likely need a freshen up too, in order to restore some of the missing power, but once that’s done you will have something that’s good and rideable for about £1500. Not a bad deal all-in-all. 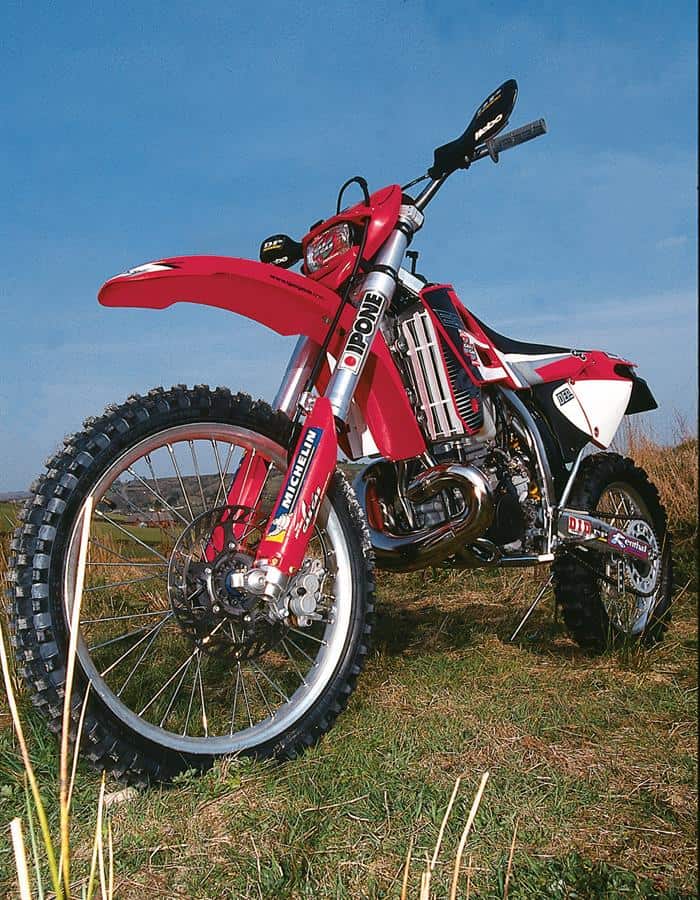 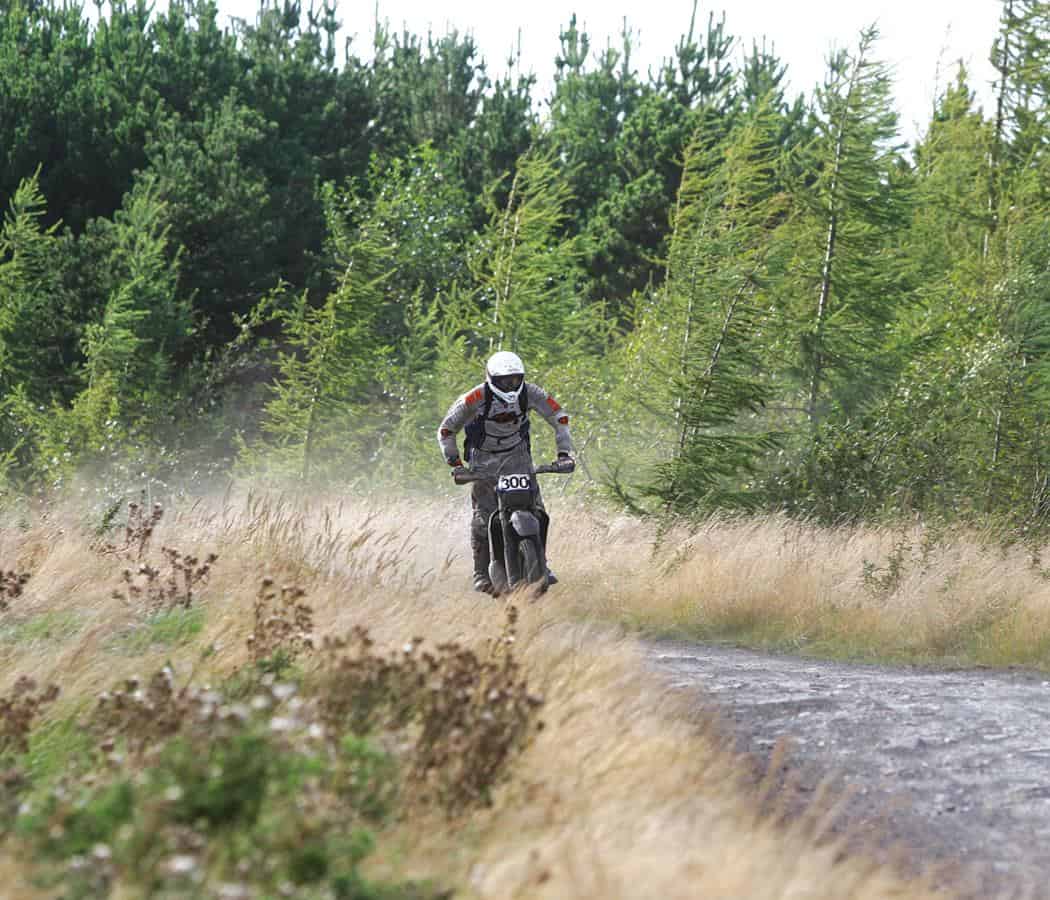