Bike cleaning is a chore, but should never be neglected. So we welcome any product that makes the job easier, maybe even a joy. Shiny Sauce offers a hint of humour (in the name) but first tests suggest it delivers… review by Jon Bentman
PrevPrevious
NextNext
PrevPrevious
NextNext

Here’s a relatively new-to-the-market cleaning product. Shiny Sauce is something of an all-over washing agent for your motorcycle. Developed by Nigel Coulson initially for his own use as a bike valeter – his business is called Shiny Bike Syndrome Motorcycle Preservation Service – its success led him and a partner to increasing production and selling it to the public. The key attribute of the Sauce, aside from getting your bike clean, is that it’s totally bike and environment friendly. So it won’t eat into your aluminium nor discolour your plastics – and it won’t poison the well. Easiest thing to do here is to quote his own description:

“Shiny Sauce ™ is an all-in-one-bottle, environmentally safe, biodegradable, pH-neutral, water-based, general-purpose cleaner. This is a fantastic and unique product which will cut through mud, mould, algae, bird fouling, sticky pollen, dead insects, traffic film and light grease and oil contamination with ease. Furthermore, it can even clear baked-on carbon/soot and brake dust deposits.”

It’s not cheap at £8.99 for a litre (it comes in a bottle with a spray top) but that is market standard price. As long as it works, we’d be happy.

Well, we can’t say our first test for Shiny Sauce was too difficult. Our long term Honda CRF250RX had picked up some dirt after a whole day’s riding with ActionTrax in Kent. Having read that the sauce is safe for all surfaces I simply sprayed it liberally over the whole bike, but exercising some economy as I’d like to get at least a few washes from a bottle.

Being lazy, and the dirt being lightish I didn’t brush it in, just left it to soak for about three minutes. Wash off was with my old Karcher K2 power washer (cold water). And fair to say the Sauce did its job. The dirt came away super-easy and after that first soak and rinse it really didn’t need any more work. And I’ve got to say I was happy knowing that the cleaning agent wasn’t poisoning the water system as it drained away.

The ease of use and impressive results got me to using the Sauce on my boots as well (as you do). There was a lot of grass staining on one boot. Again, after a simple spray over and no scrubbing (I am that lazy), then a short wait and rinse the results were very good. So good I got all my boots out and washed the lot. I love a job made easy and the Sauce was delivering this.

So that’s it so far. We’ll report back again after we’ve found a tougher job for the Sauce, but first feedback is entirely positive.

If you’d like some Shiny Sauce yourself you can buy directly online at https://shinysauce.com. It is starting to be stocked by a few bike shops as well – listed on the website. 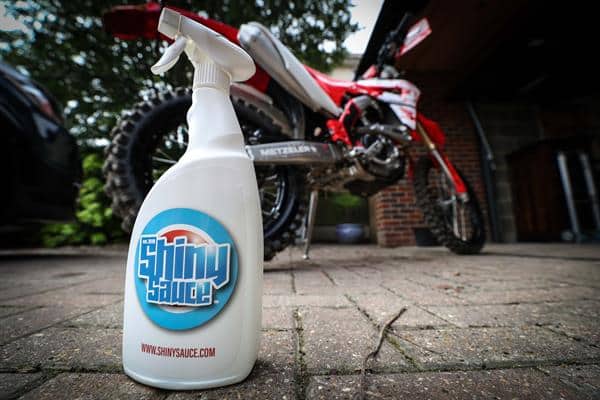 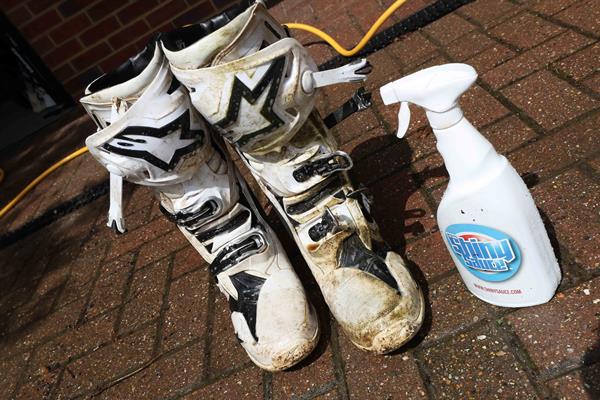 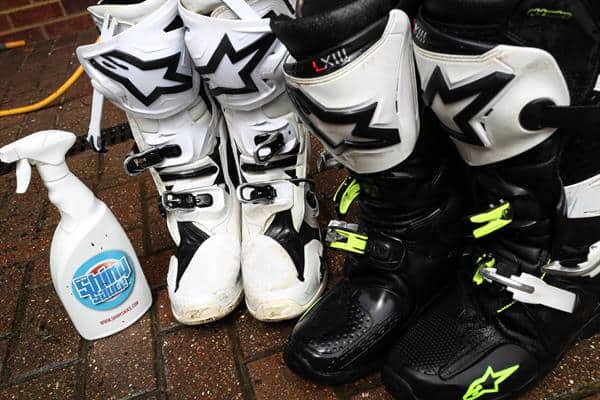