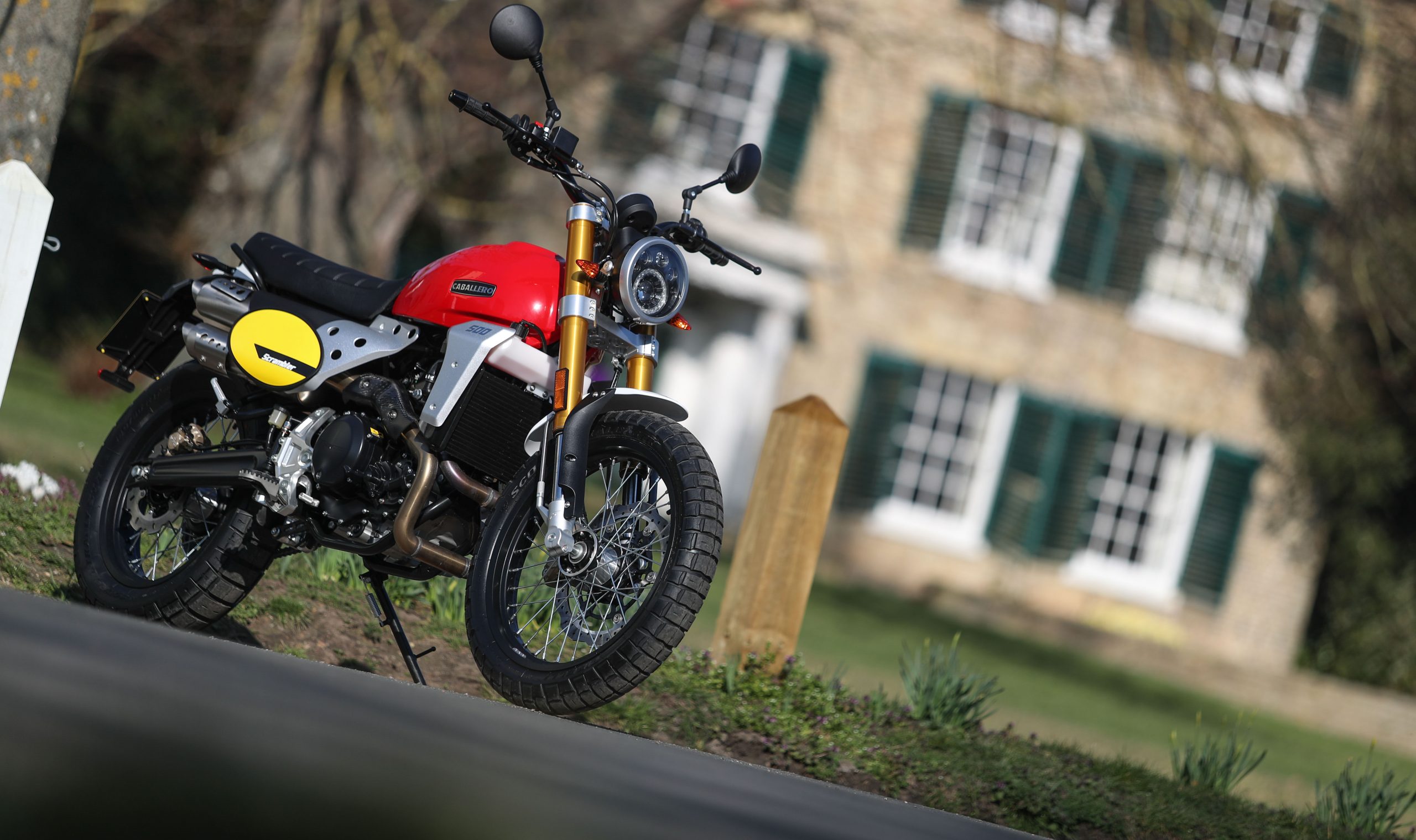 We’ve waited a while for this model, it’s taken longer than expected to get here as Fantic have worked overtime to get it super-refined, but the wait was worth it, the Fantic Caballero Scrambler 500 truly impresses. It’s one sweet ride. If you’ve read our report on the 125 and 250cc Scramblers (RUST #39) you’ll know these are exquisitely detailed, sweet handling heritage-scrambler styled road bikes. But with the 500 motor installed – we’re talking a whole new level. 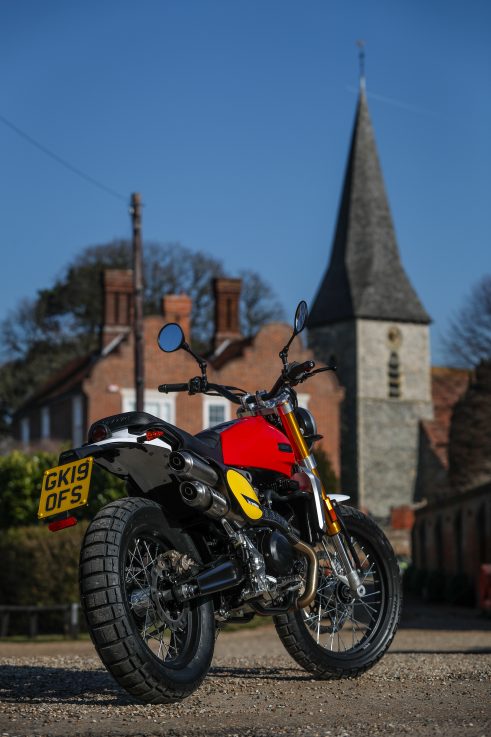 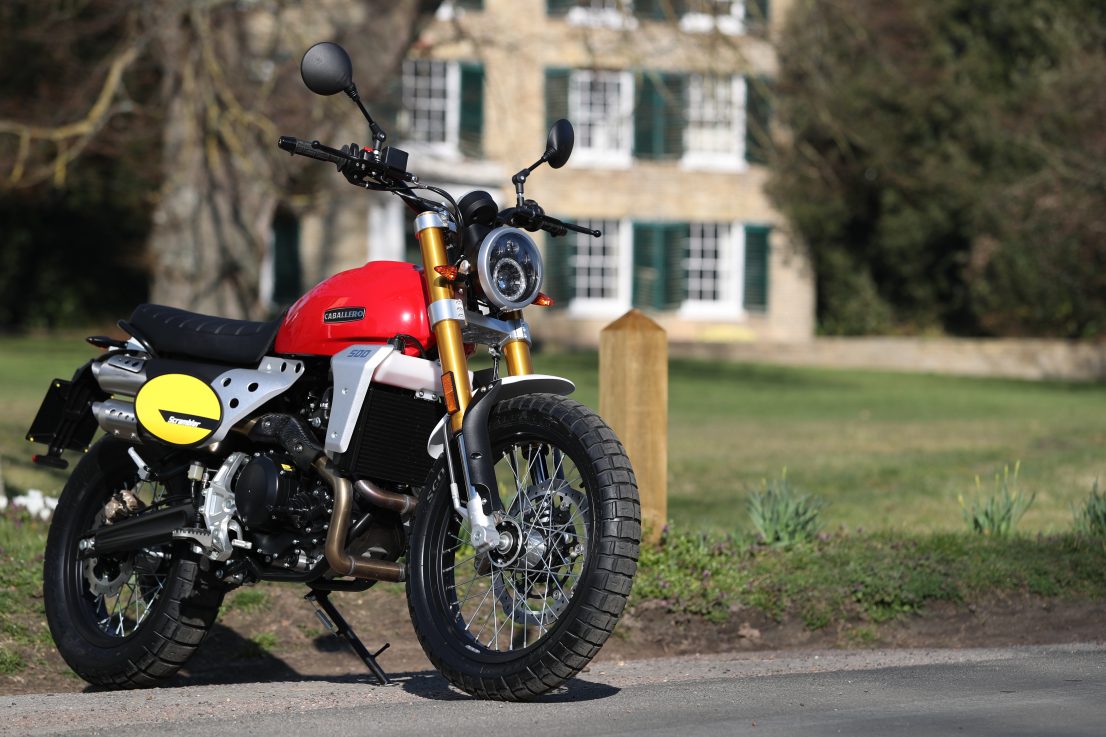 EAST WORKING WITH THE WEST

Given our previous test of these Caballero Scramblers, there’s just the one aspect to update ourselves on – the bigger motor. The motor comes from Chinese manufacturer Zongshen (as does the 250) and it’s a 449cc SOHC unit, and pretty techy given it’s liquid-cooled and fuel injected, not to mention cat-equipped (so meeting Euro4 regulations) with a six-speed box in the transmission. And while it’s built in China, the Italian Fantic squad have been through it with a fine-tooth comb speccing the cams they want, refining the ECU and FI etc. So it’s not just an arbitrary engine drop-in situation. In fact, the first round of engine refinement was masterminded by British firm Ricardo Engineering (who, among others, have helped McLaren with the tune on their road supercars), while Italian experts Athena worked on the ECU and FI and another Italian firm Arrow designed the cool exhaust system. Fantic themselves took over final stages of development to create the best, smoothest, engine tune possible. So Chinese made – like so much of our tech these days (so don’t get sniffy) – but with heaps of European R&D.

The chassis we pretty much already know about, but check out RUST #39 for the full rundown. 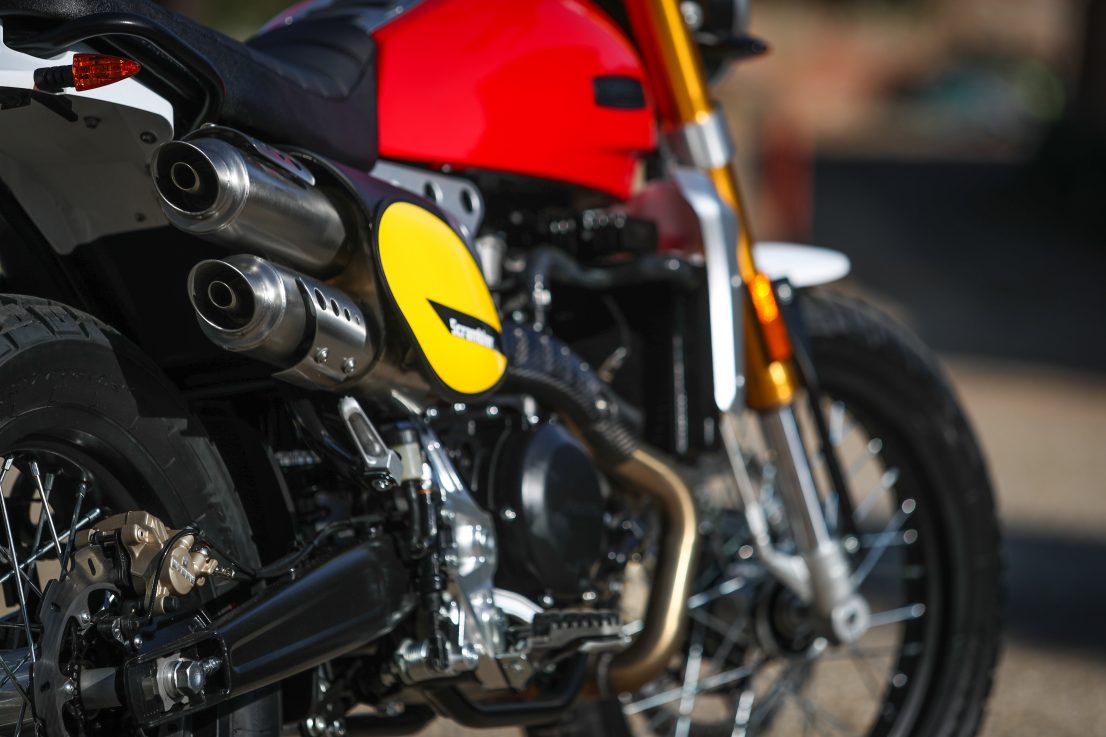 Here’s the thing, this 500 (as said, actually a true 449cc) motor is something of a peach. There’s a sense of balance and refinement that shouldn’t be a surprise, but is. Maybe because we’ve grown used to riding 650s and 690s, we’re anticipating slightly lumpy torque-laden acceleration. But being smaller, with less reciprocating mass – and even that smoothed by way of a counter balancer – the power comes in a little more linear with a sweeter smoother build. It doesn’t stumble at low revs either, and you can ride it right down to near tickover without the chain-slapping chugga-chugga that bigger singles often deliver. So you don’t need to ride at a minimum 3500rpm all the time, riding smoothly at least 1000rpm lower means you can ride through town just that little more chilled.

And the bottom-to-mid is impressive. Clean pick up and decent acceleration are there and these combined with a slick shifting well-spaced six-speed gearbox mean you make easy and nimble progress. And again, for a single it feels smooth. The surprise is there’s actually something of a screaming top end that goes with that. Often you have a choice – good low-end torque or top end rev – to have both is quite rare. When you analyse the specs you can see what we essentially have here is the equivalent of a 450cc enduro bike engine, at 40hp it’s what a CRF450L makes Stateside and pretty close to what European enduros are making, so on the cam the sound of the Scrambler 500 is unsurprisingly not unlike a competition-tuned 450 enduro. So instead of short shifting at around 5500rpm, you can hang on to the throttle and hold out for peak power at 7500rpm. It’s pretty sporty and sounds even more so on the over-run as the exhausts spit and pop as the revs come down.

Now I read the odometer on the test bike more than a little wrong (which is forgivable given the whole instrument console is a bit titchy) thinking it said 1480 miles when in fact the total mileage at time of testing was just 148 miles. So wringing out the poor Scrambler through the gears was probably not the go, but is what happened. And consequently while it didn’t feel as tight as it might, it did struggle to rev-out in top, so while fifth gear reached 80mph, sixth kind of plateaued at 90mph. At the time, not knowing the real mileage it felt to me like it was over geared, but perhaps it was just too new, with more (considerate) miles on the clock it will loosen up and could probably make 100mph, not that outright velocity is what this bike is about. It was riding nice and stable at these speeds, mind. 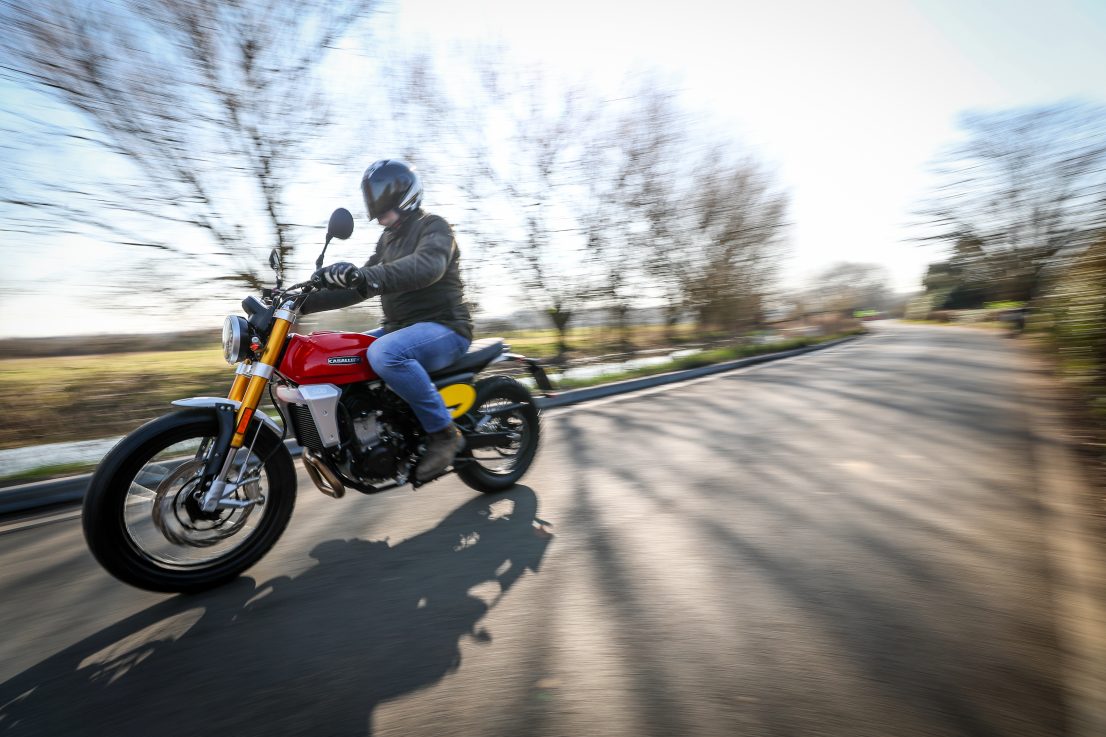 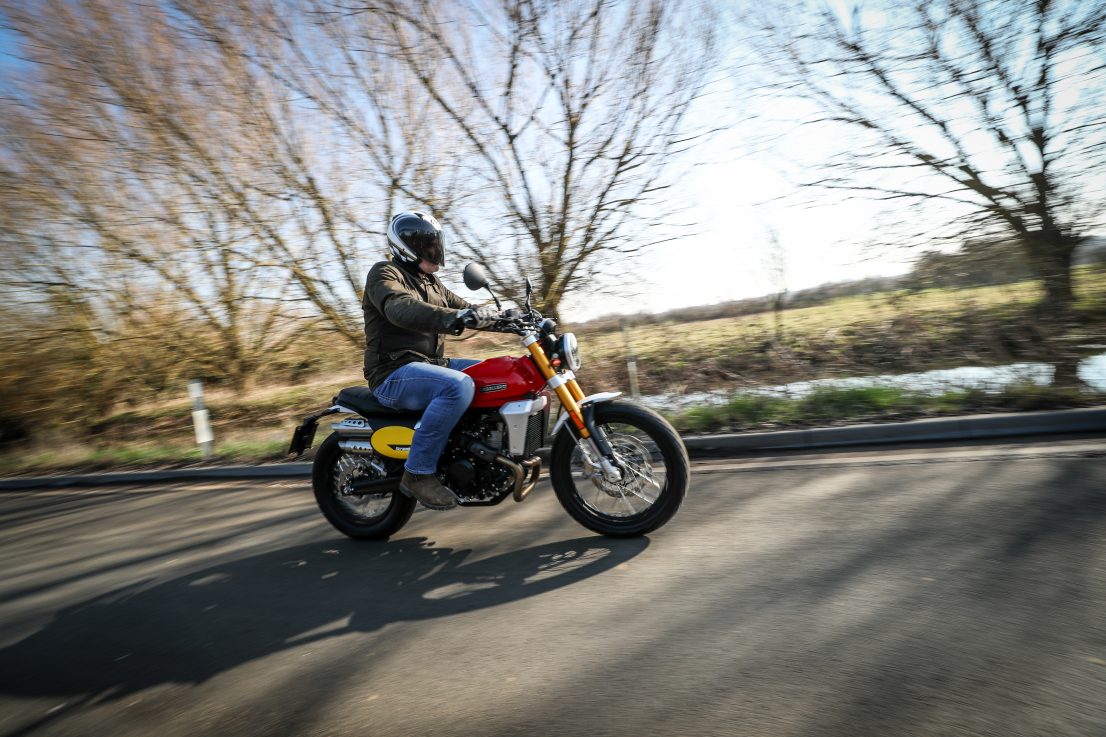 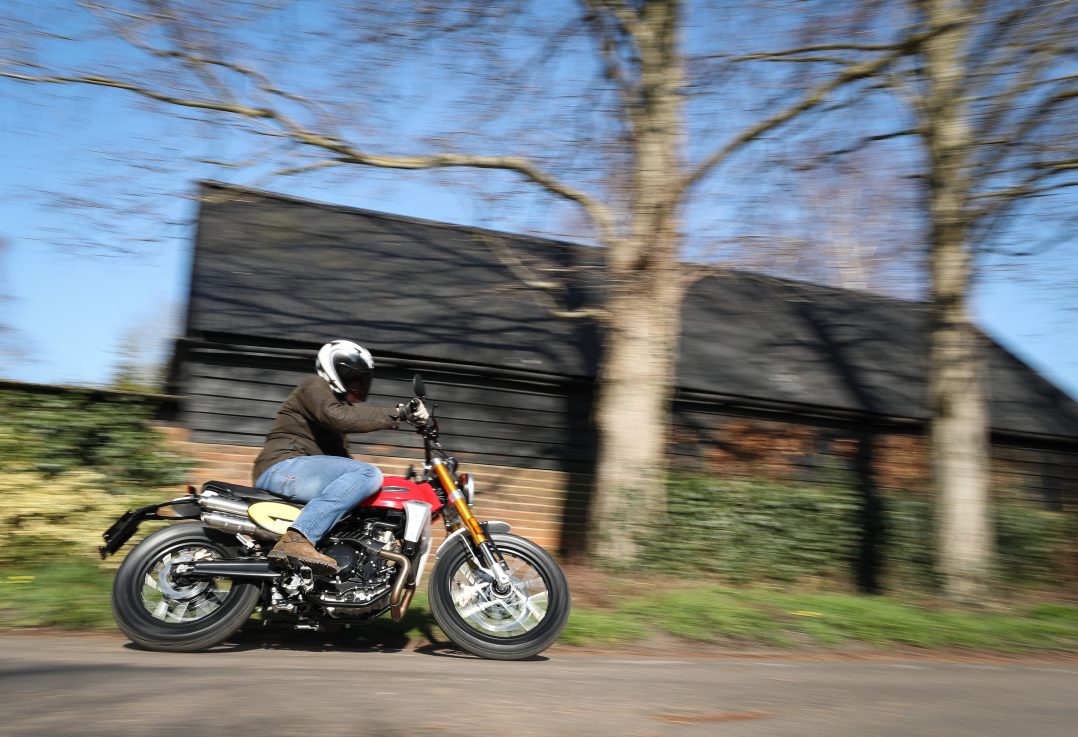 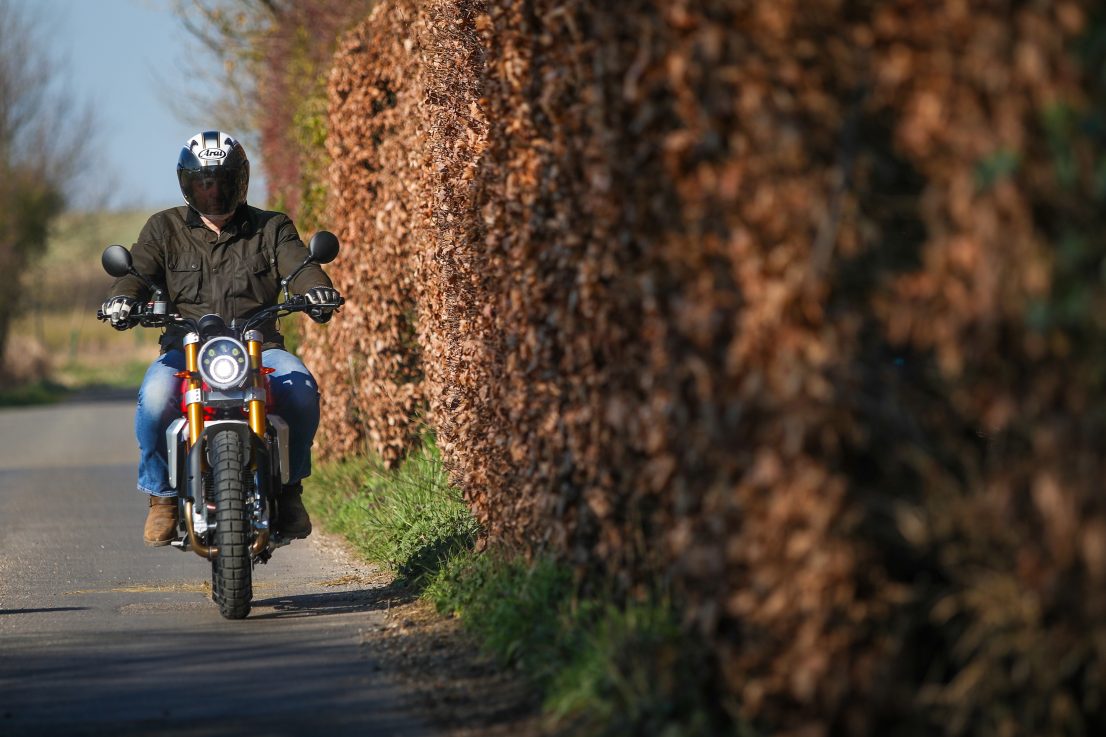 Now the 500 motor comes with something of a weight penalty, all that extra metal shifts the Scrambler up from 140kg as a 250, to 150kg as a 500 (claimed dry weights there). Back to back you might well notice this difference, but the only feedback I got was one of lightness and quick handling. The combination of a 19” front and 17” rear, with Pirelli Scorpion Rally STR tyres, is a fine, quality choice, while Fantic’s 41mm USD forks and monoshock rear, while slightly firm (again this can be down to being brand new and not bedded-in), make for quick but predictable steering. And you have to appreciate the quality that’s thrown into this chassis, check-out the CNC milled fork yokes, engine plates and the handsome chro-moly frame. Likewise the Byre brakes (being a subsidiary of Brembo) worked well and given the short wheelbase actually best performance was obtained by using both front and back in equal measure thereby better balancing the bike.

Some people might be inclined to ride the Scrambler off-road – after all it’s in the name. But really this feels to be a street scrambler at heart. I’m not sure the suspension set-up will suit either, and being a relatively short bike it’s not best balanced for standing work, and in any case standing is compromised by the bulging exhaust mufflers under your right calf. Sat down cruising gently along hard pack trails or gravel, I can see that, but for rutty green lanes there are better options. There’s a Rally model coming soon, with a full 200mm of suspension – that’s more likely to be the off-roading / adventure choice. 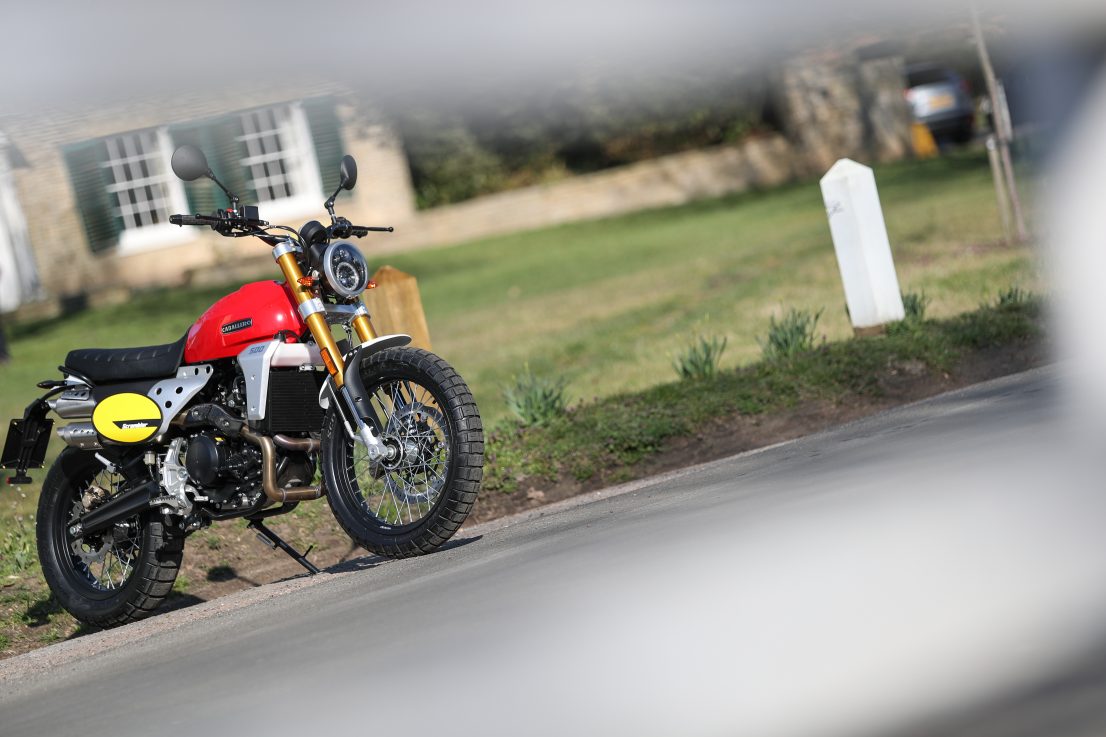 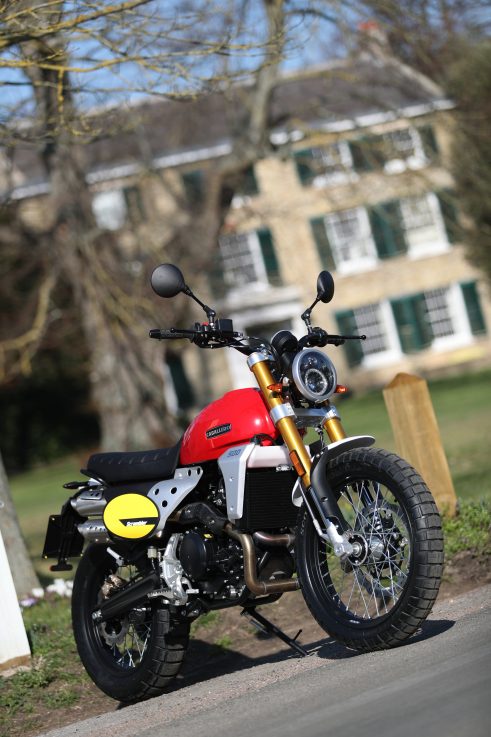 In all, we’ve got to give Fantic a big thumbs up for the Caballero Scrambler 500. We liked the smaller versions, but the 500 is for us the real deal, the engine performance marries perfectly with the chassis and it delivers exactly what it promises. The styling is exquisite and the engine is really well tuned. It ducks under the 47hp EU A2 motorcycle power limit, too, so this further enhances its attraction. Yeah, an excellent job. Oh, and fun to ride! 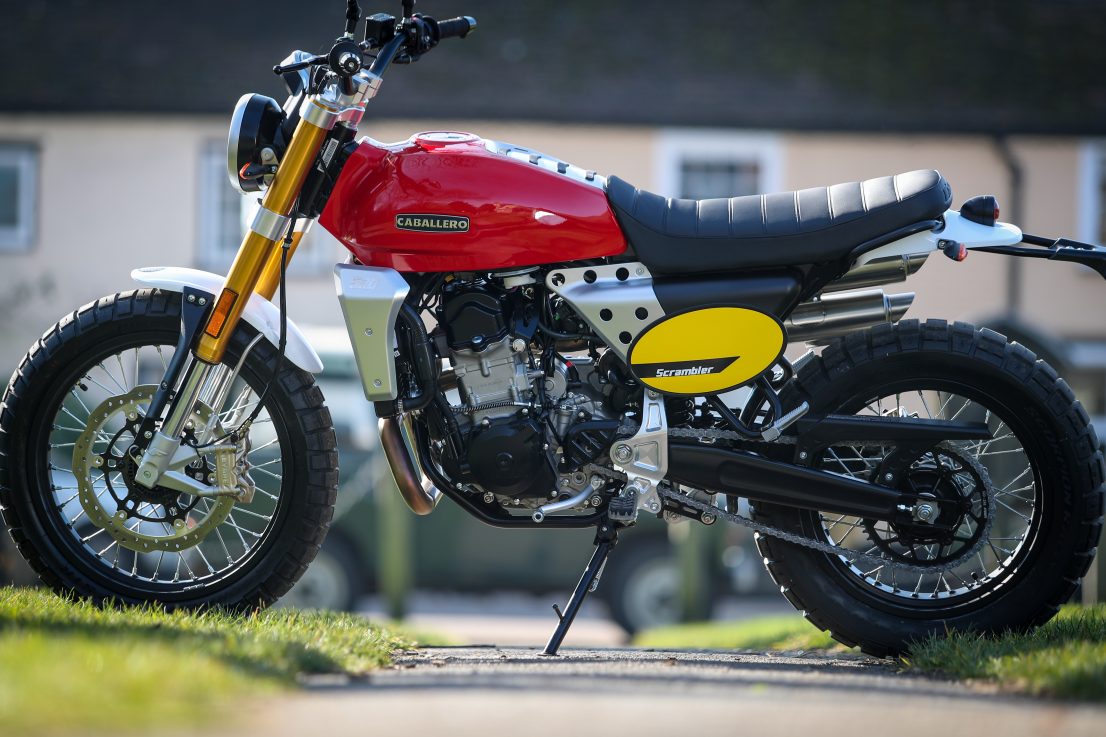 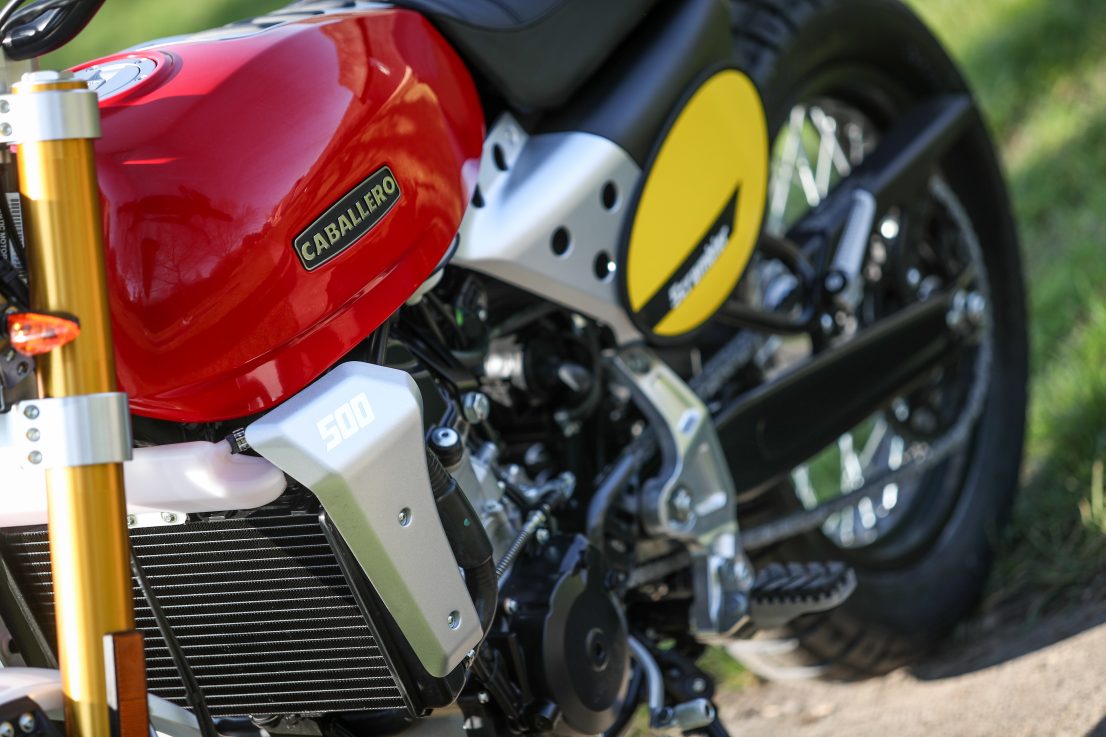