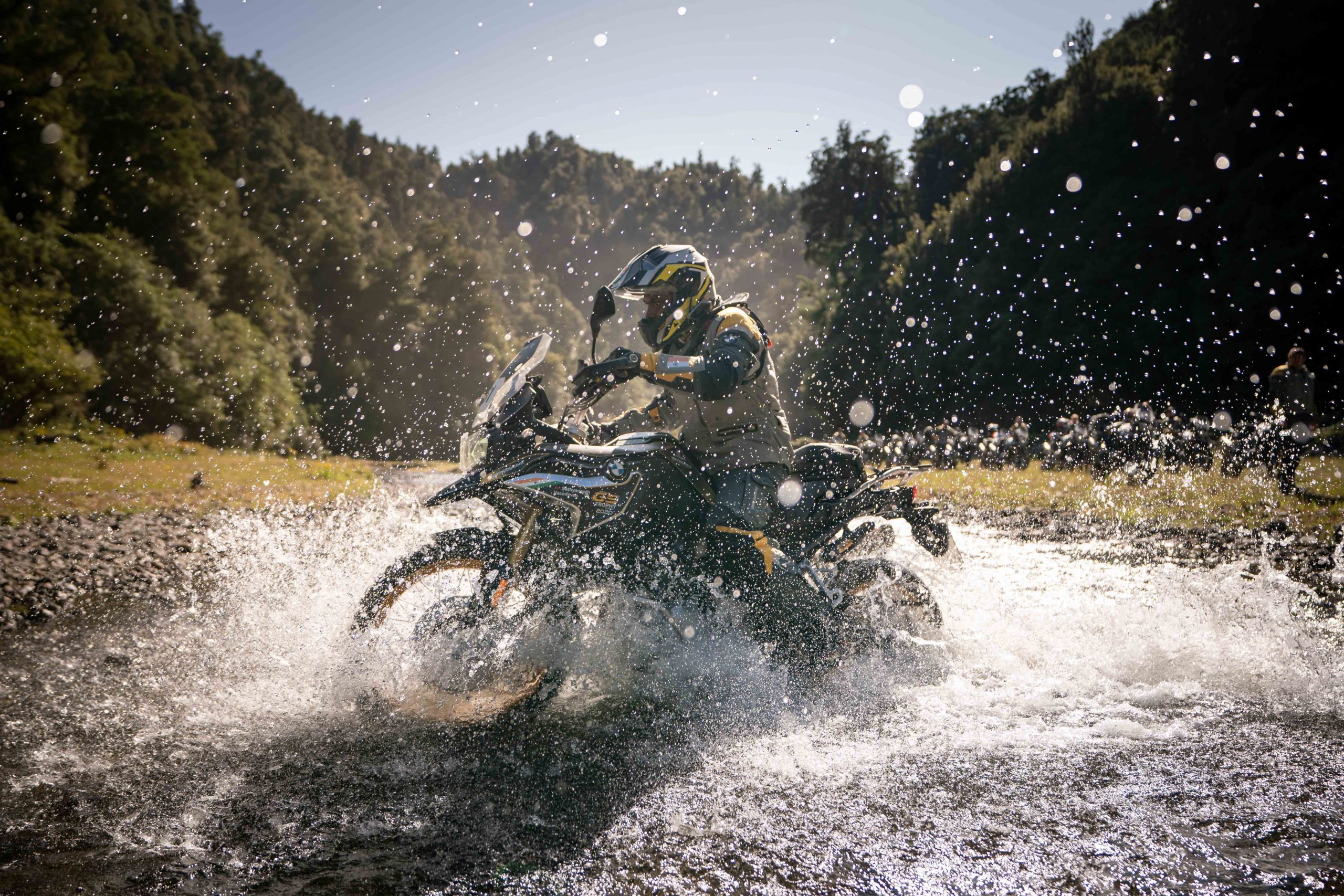 With the recent announcement that there will be further a BMW Motorrad International GS Trophy coming in 2022 – this time to be run in Albania – this is a good time to let the uninitiated know just what this event is about – and how to get on board.
PrevPrevious
NextNext
PrevPrevious
NextNext

BMW’s International GS Trophy goes from strength to strength. First run in 2008, when five international teams took on the deep sands in the Tunisian desert; the 2022 edition will be the eighth running with the teams tally now reaching 22, including six all-female teams. With each male team comprising three competitors and female team two competitors plus embedded journalists that’s around 80 riders from all over the world, riding for seven days over some 2000 kilometres (predominantly off-road) through a wilderness landscape – most probably on BMW R1250 GS adventure motorcycles (although the chosen model for this edition is still ‘TBA’).

The GS Trophy is like no other event, mixing elements of rally, trials and adventure into the riding, then adding in elements of team building, living in the natural environment and international brother- and (since 2016) sister-hood. It’s a competition, not a race, and increasingly more about relationships than tactical advantages – where success has typically become measured by the capability to get along and work constructively with your teammates, and with your international competitors. It’s a tough event though, the marathon days can get very long and every year the riders have had to dig deep into their reserves to reach the finish at the week’s end – and not everyone makes it.

The GS Trophy is also, of course, a one-make series – it’s BMW from top to toe. So to enter you need to be a BMW owner/rider (any model). And an amateur (ie. not a professional racer) – riders are allowed to have competed in motorcycle events before, but not to professional level. The riders are selected in regional (national) qualifiers, which although often quite different to each other, do contain set tasks to ensure consistency in process and to ensure the qualifying riders will be able to deal with the challenges of the international event.

Typically the qualifiers are two-day (weekend) affairs where a starting entry that often numbers in the hundreds is whittled down to a final dozen or so, who then compete for the final places; for 2022 this means the top three men qualify directly for the Int. GS Trophy while the top two women in each national qualifier will ‘get ranked internationally’ to determine the final top six female teams that will proceed to Albania. The competitors come from all walks of life, mechanics to CEOs, for what BMW suggest will be an experience of their lifetime. It’s not about speed, not about strength – but if you’ve got the right adventuresome blend of skills and mentality then it’s the event for you.

Note that for the finalists going to International GS Trophy this is an all-expenses paid deal. BMW supply the competitors’ bikes, arrange the food and the accommodation (tents!), nearly all the clothing (bring your own boots and helmet) and pay for and arrange all the flights and transfers.

What to expect if you get to Albania? Well, going on the experience of the past six International GS Trophies, each GS Trophy day starts the same way – in the bivouac. Competitors in this event camp each and every night. Equipped with one-man tents, sleeping bags and mats it can be an early reveille, as early as 05:30, with a rush to the canteen for breakfast before striking camp and hitting the tracks.

The riding of course varies. Tunisia was typified by deep-deep sand (that exhausted riders, in fact took one man to complete mental exhaustion, necessitating evacuation). The 2010 event in South Africa saw fast pistes across the veldt – dangerous ones, though, one journalist crashed so hard the rims on his F800GS were all but ripped from the hubs. In South America in 2012 there were plenty of mountain roads (in the Andes) and more than one GS went over the edge. Likewise venturing into the Canadian Rockies in 2014 saw super-technical mountain trails negotiated, again not without a few victims. In 2016 things got steamy in the forests of Thailand and there are riders with some not-so-fond memories of their day on the Ho Chi Minh Trail. In 2018 the vast steppe in Mongolia provided a speedy and deceptively tricky terrain, where mistakes were pretty heavily punished. In 2020, crossing New Zealand, life on the trails was a little more restrained although scaling the South Island mountains tested more than a few! The event is not Dakar-dangerous, but it is off-road riding in wilderness locations often on technical trails for extended periods, so a high level of riding skill and fitness is important.

Then there are the special tests. As the event is not a race, the competitors are marked on their participation in all manner of tests. For instance, back in 2012 in Patagonia the competitors found themselves running a GS across a shallow stream (and you might have thought, ‘heck, I could ride that’) – well, the test wasn’t about riding. It was a test for the three men of the team to run a single GS three times around a course set over two streams and countless banks. Pushing a 200+ kilo motorcycle the distance required (against the stopwatch) would be testing enough, but this was in heat and at altitude – and in full riding kit. More than a few competitors collapsed and one the doctors temporarily withdrew from the competition to allow recovery.

The actual riding tests can be very challenging too – and given the presence of the stopwatch (despite BMW’s assertion ‘this is not a race’) it can get pretty action-packed. A sprint through deep sand is a typical GS Trophy test, which can result in some spectacular riding – and get-offs. In 2010 in South Africa (on the leg into Mozambique) the deep sand test was extended to 30km and while the stopwatch was dispensed with (this was an endurance test) there were no end of crashes, including those by the entire Canadian team, and one that resulted in a crush injury to a Japanese rider’s foot that saw him retired from the event.

So while not overtly dangerous, accidents do happen. Even the daily wear and tear on the bodies is significant, again in Africa the queue for the doctor’s morning surgery (mostly for pain relief) came to rival that for the breakfasts. The GS Trophy typically employs three doctors, and besides one doctor riding among the competitors and two following in support trucks there’s a helicopter for emergency evacuations (which was used both in Mongolia and New Zealand). Many riders find they hit a natural physical/mental ‘wall’ at around day five, at which point their powers of endurance become severely tested. It’s become customary to find randomly sleeping riders over the last three days of the event – any time the engines stop the riders will catch a quick nap.

The length of the days varies, but a finish before 15:00 hours would be very unusual. Most years, where some mishaps occur on the trail, teams will often roll into the bivouac long after dark. Days marked ‘marathon’ – such as a 400km day off-road across the mountain plateaus in Argentina – are a signal to riders to ‘pedal faster’.

The evenings are then a time for repairs – the doctors often attending to the riders’ ails, the mechanics fettling the GS motorcycles. In New Zealand the BMW mechanics set a world record for completing the first 600km service (essentially oil change and filter) on all 120-odd F 850 GSs in one night – a sight to see. After pitching their tents and taking showers the riders can at least look forward to an excellent feast; BMW are never less than generous in their catering. After a catch-up on the standings in the competition most riders are then fit only for bed, leaving the organisers and journalists to work on into the night…

The GS Trophy takes the riders into some pretty spectacular wilderness environments. These are aspirational destinations, guaranteeing once-in-a-lifetime experiences.

Often the riders get to experience the environment even closer than they may have at first appreciated. In South Africa the riders were asked to compete in a series of canoe races –across hippo’ and crocodile infested waters. This was after a wild (in every sense) bull elephant had charged the American and Japanese teams on a section of the day’s ride. In South America a white water rafting competition saw the American and British teams overturn their raft for a wild ride between the rocks. In Canada the concern was bear attack, but it seems the sound of thundering GSs pretty much sent the grizzlies running – plenty of coyote were found on the trails though. The sounds of the jungle – including howling apes – helped lullaby the riders to sleep in Thailand. Mongolia seemed quite empty on first inspection, save for the odd yak herd, but abundant desert mice and their attendant hawks and eagles showed life can thrive even in the harshest environments. While in New Zealand the riders rode in awe through forests millennia old, listened to bird song they’d hear nowhere else in the world and marvelled as dolphins cut curves in the west coast surf.

Consistent to each of the GS Trophies has been the international bonding that has resulted from the shared experience. As the teams are paired for each day (on a rotation) there’s ample opportunity for the riders to meet and converse with their international counterparts, throughout the day as well as in the bivouac. Guys and gals who would never have otherwise met are pulled together and through the international language of the motorcycle they come together in something of a celebration.

Occasionally even the tests require unification, such as the long sand test in Mozambique where it was a requirement that all members from both teams (paired going into the test) reach the finish together – any man or men left stranded was a complete DNF for both teams. In South America too, in the rafting it was two teams to a boat.

So the next GS Trophy adventure awaits. Presumably in summer 2022 (although it could be spring or autumn). In the meantime the qualifiers will fire into life – just as soon as the worldwide pandemic situation allows. Go to your local BMW Motorrad dealer, or check in online with your national BMW Motorrad website to find out where, when and how to enter (and go to www.gstrophy.com for more inspiration and information).

*3 amateur riders per team plus a journalist (also riding)

*Competition based on daily special tests, some based on riding skills, some on cerebral/physical activity appropriate to wilderness location 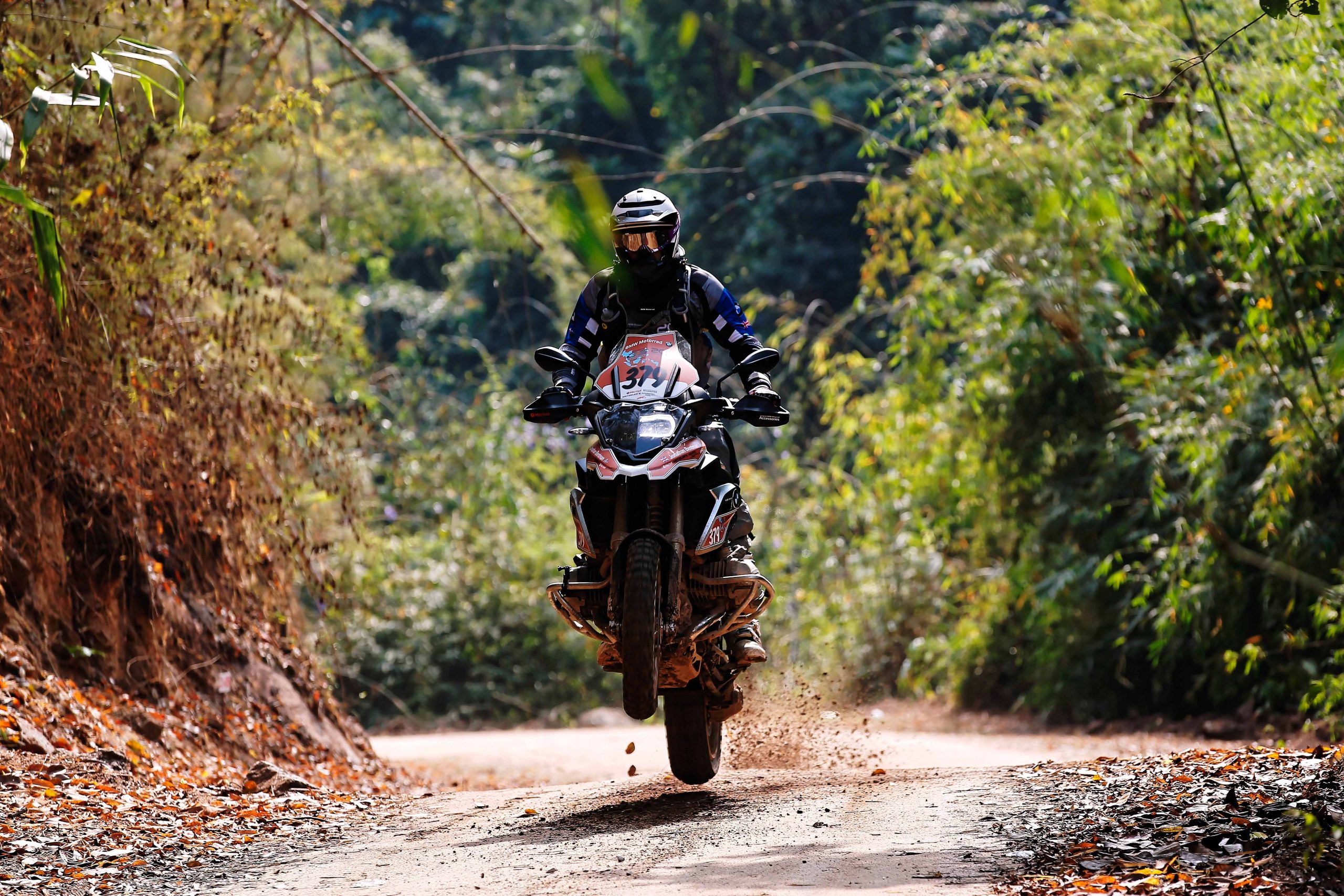 RUST’s JB has attended six International GS Trophies as BMW Motorrad’s press writer (or ‘story teller’ as they sometimes call him) – so he knows most of the ins and outs of this competition. JB rode five of them (the Canadian event twice), but after a pre-event knee injury rode out the 2020 event in a Land Cruiser.

As well, RUST’s Craig Keyworth rode in Team UK in the 2018 edition in Mongolia. He then went on to compete in and finish the 2020 Dakar Rally – which goes to show just what’s possible when inspiration grabs you. 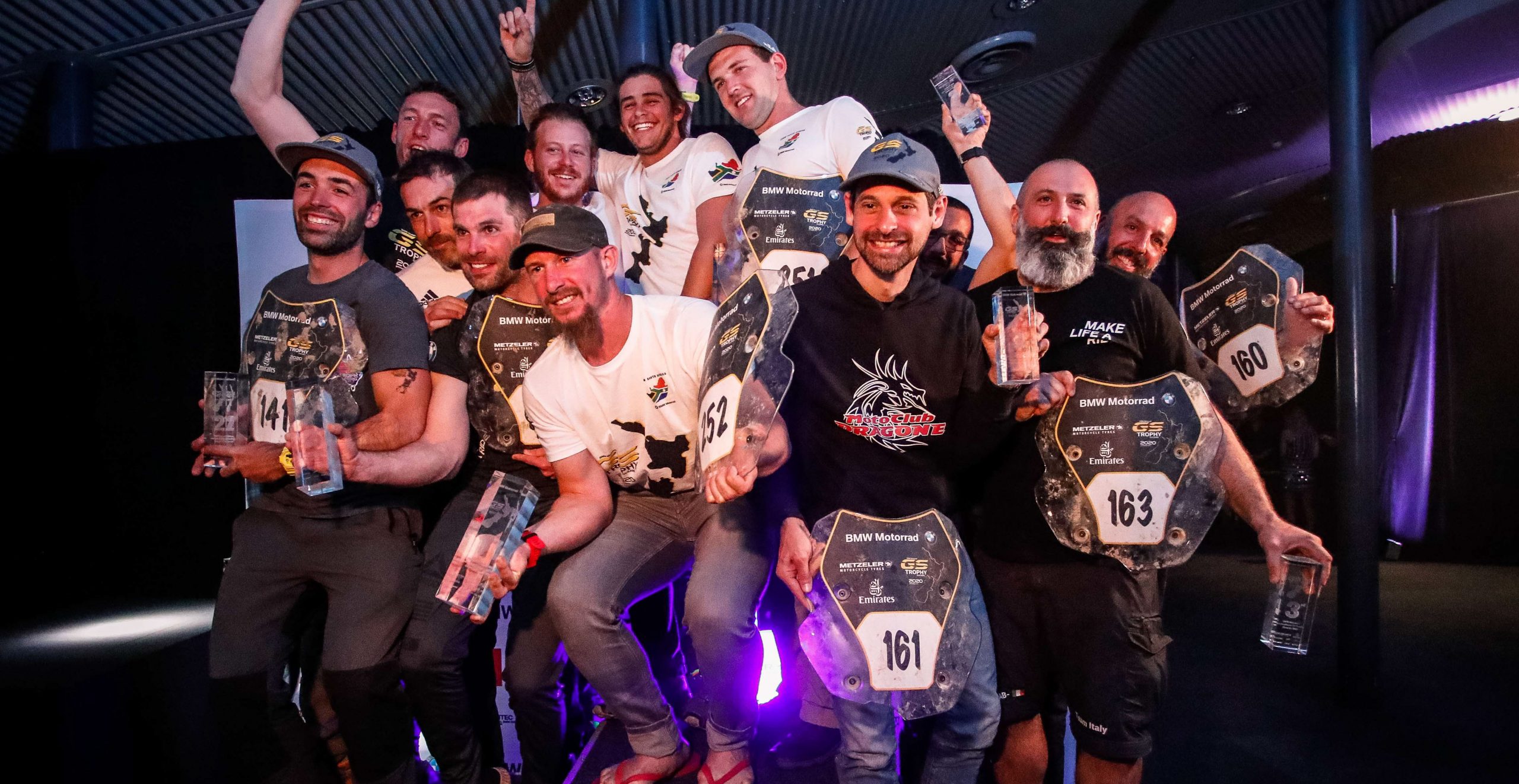 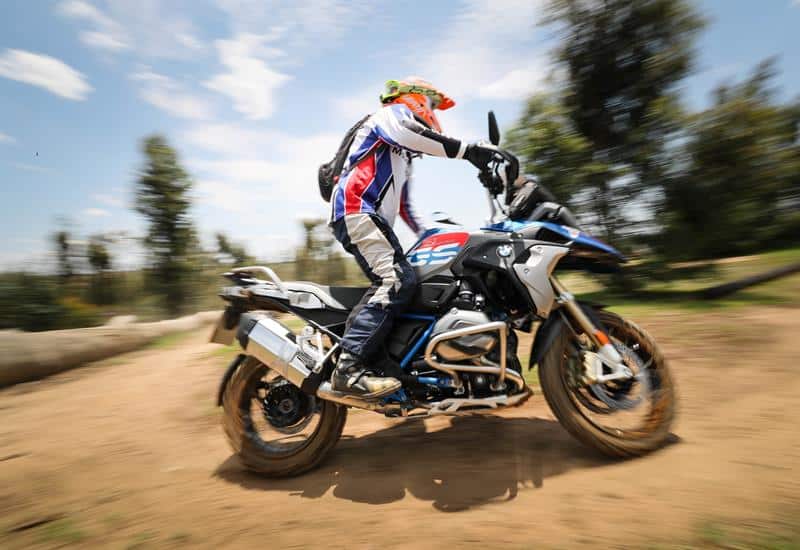