After a disappointing DNF at the Le Touquet beach race. The mad Frenchmen responsible for this beast gave this 1200 Hog the SM treatment…

Surely supermoto is all about machines which make up for their relative lack of power with superb handling and loads of ‘chuckability’.  But it would appear that the motard scene has created a monster, a high-powered hybrid which doesn’t really fit into any of the existing motorcycling ‘pigeon-holes’.  And one which is perhaps slightly at odds with the original ethos. I’m talking about the ‘mega-moto’.  Take one large capacity V-twin motor, slot it into an oversize dirtbike rolling chassis, slip in some 17in wheels and you’ve got yourself a fearsome road bike. Highland started the production ball rolling with their V2 Motard. And KTM recently caught on, building the 950SM. But the mega-moto scene really originated in the workshops and garages of enthusiasts. Mad mechanics throughout the SM world have long been motarding GS Beemers, Adventure KTMs and all manner of bikes. And the most unhinged creation of all these mutant machines? It’s gotta be the Harley SM you see before you! 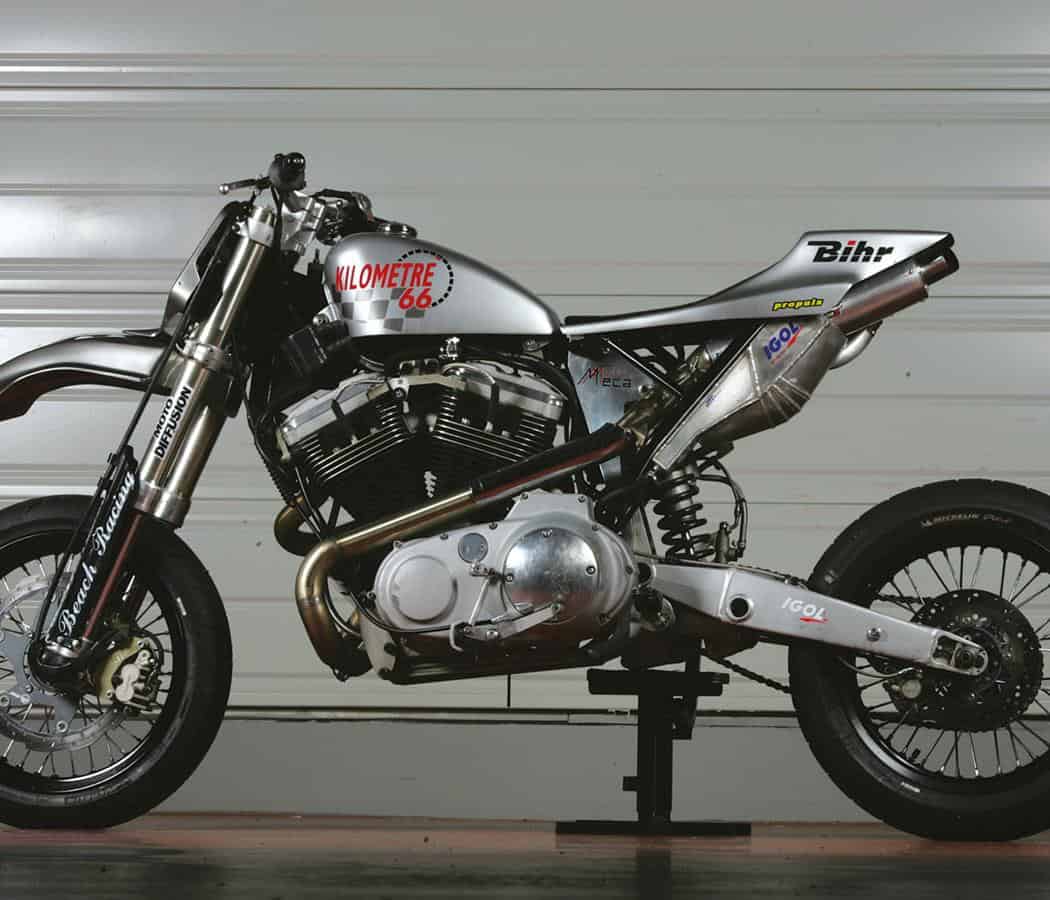 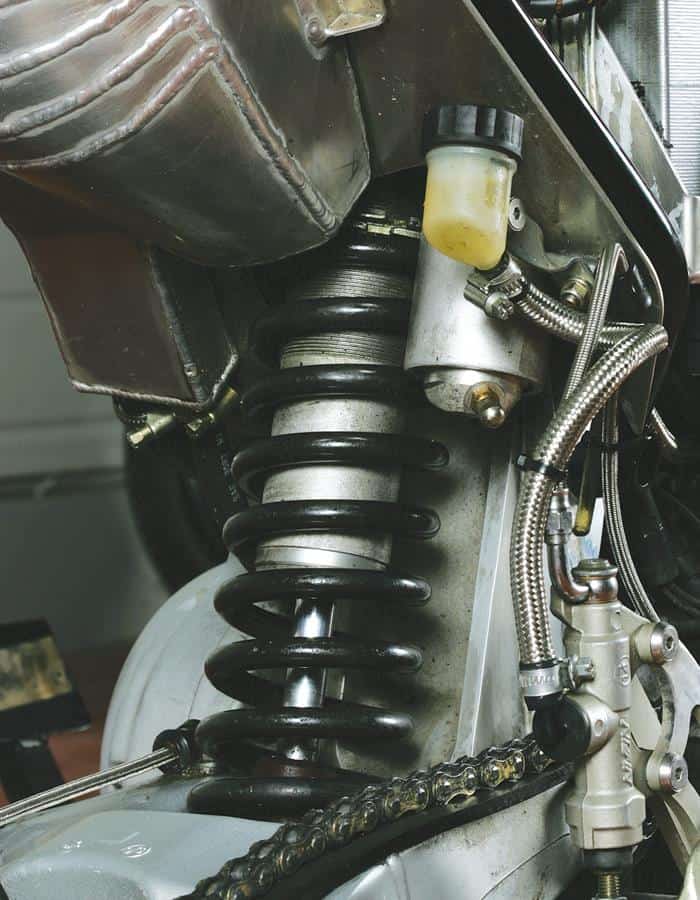 Piggy in the Middle

Rather than being built as a dedicated motard, in the true spirit of supermoto the Harley actually began its life back in 2002 as a dirtbike. The Enduro du Touquet is the most prestigious beach race in France and takes place on the north coast in early-February, after the end of the African rally season. Six months before the race, two Harley enthusiasts, Christian Dubreucq owner of an H-D dealership, and his friend, Vincent Boutry, who runs an industrial fabrication company, were in the shop chatting over a cup of coffee. ‘I’d like to do some kind of publicity stunt at Le Touquet, something unusual…’  suggested Christian. ‘I’ve always wanted to put a big capacity bike on the sand’.  Vincent glanced around the showroom, and his eyes fell on a Sportster. ‘Why not a Harley?’  he asked.

A brief once-over of the bike confirmed that the idea was utterly mad. ‘For a start we’ll have to junk the original frame, it’s completely useless. It can’t cope with the suspension forces. We’ll have to think about a new one.’

‘I think we can make it in time’  countered Vincent. And so the project began. 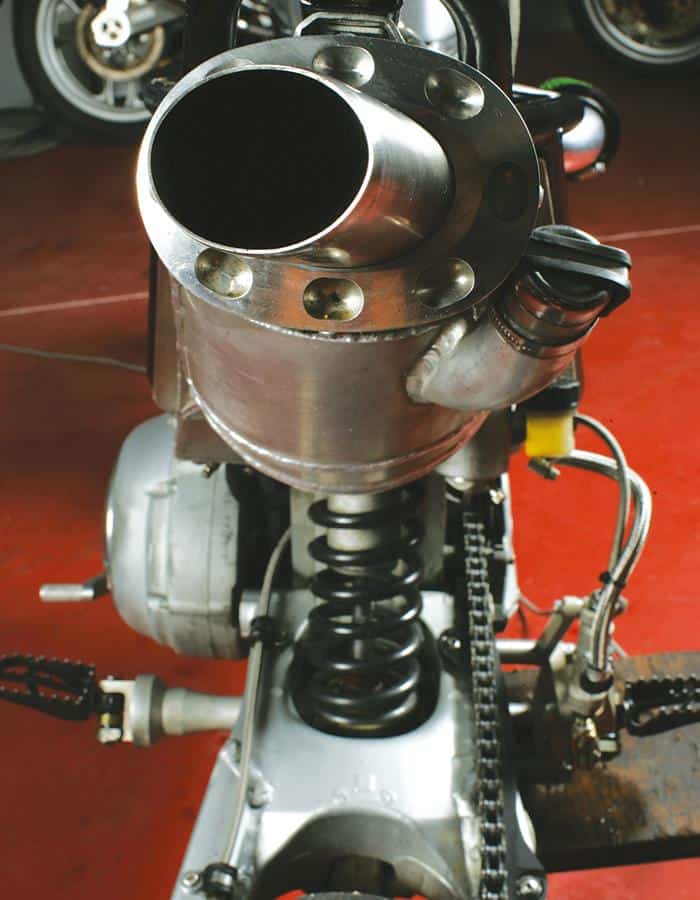 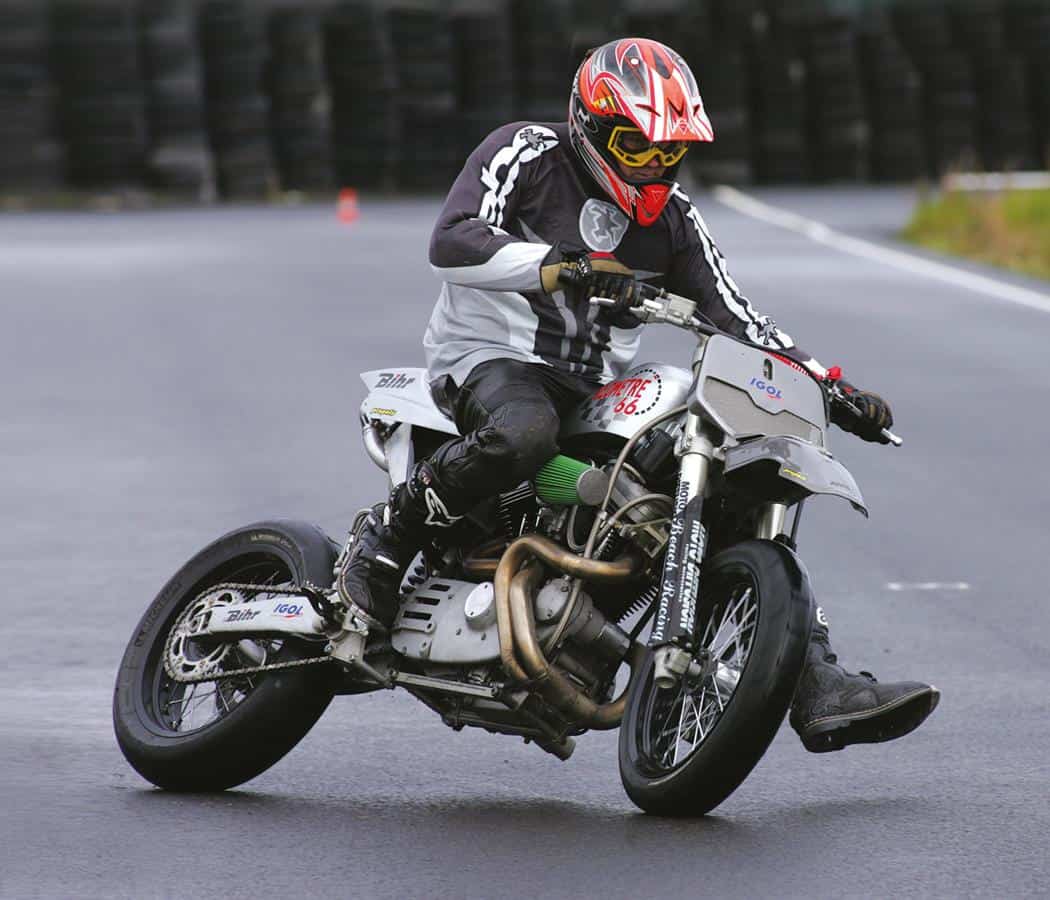 Christian phoned the French Harley importers to ask if they would like to get involved. They replied with the gift of a brand new 1200 Evo engine. And with the heart of the project in place, ‘Doctor Frankenstein’  and friends could start work.

Clearly, much of the rolling chassis had to come from a dirtbike, and a Yamaha YZ-F was picked as the donor. Wheels, brakes, Kayaba 46mm forks, yokes, swingarm and shock were all taken from the Yam to be bolted onto the chassis.

When it came to the frame, it was clear that this would be the hardest part of the build. The very long engine, compared to the singles used in off-road bikes, proved a huge hindrance when trying to retain compact geometry. The solution was to machine an aluminium beam on which they’d mount the swingarm pivot, the footrests and the shock mounting, and then work around this. The frame’s steel spine is mounted through the upright beam (the whole idea apparently taken from the Benelli Tornado 900),  and the square-section tube leads up to the headstock. With everything bolted in place the result is a wheelbase of 1600mm, 100mm longer than a regular dirtbike.

To create the frame’s aluminium beam, Vincent used his company’s facilities (CNC equipment which produces moulds for the car industry).  A 40kg ingot was put into one of the machines at the end of the week, and the milling took almost the entire weekend. Over 40 hours of machining were required to get the beam just right. And the off-cuts were used to produce the footrests, engine mounts, and the swingarm pivot. Having such tools at your disposal certainly helps you realise your dreams! 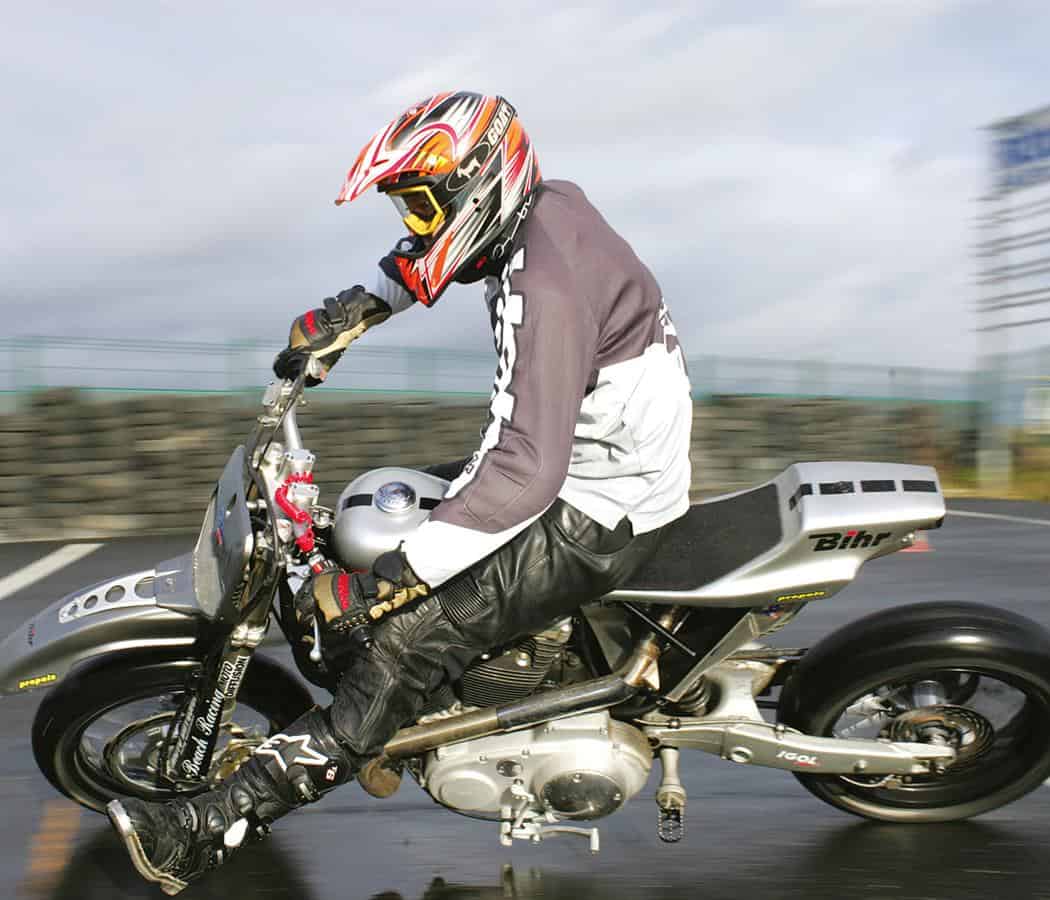 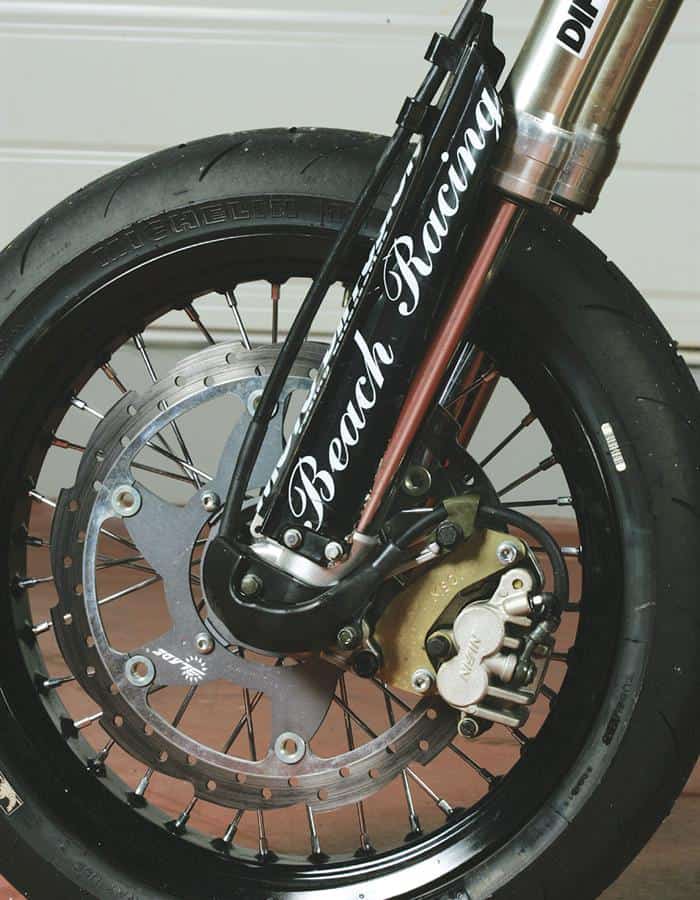 Fully built-up the bike tipped the scales at a fairly hefty 163kg, though it proved a pretty good ride on the beach. However, after getting a reasonably good start amongst the 1000 competitors at Le Touquet, the rider fell and the bike was run-over – about par for the course in a hectic beach race. Unfortunately, the incident resulted in a broken seat and figuring that the Harley was hard enough to pilot as it was, the rider retired.

After this DNF, the bike was simply stored in the garage, Christian’s cleaning lady constantly grumbling about the sand and oil on the floor! 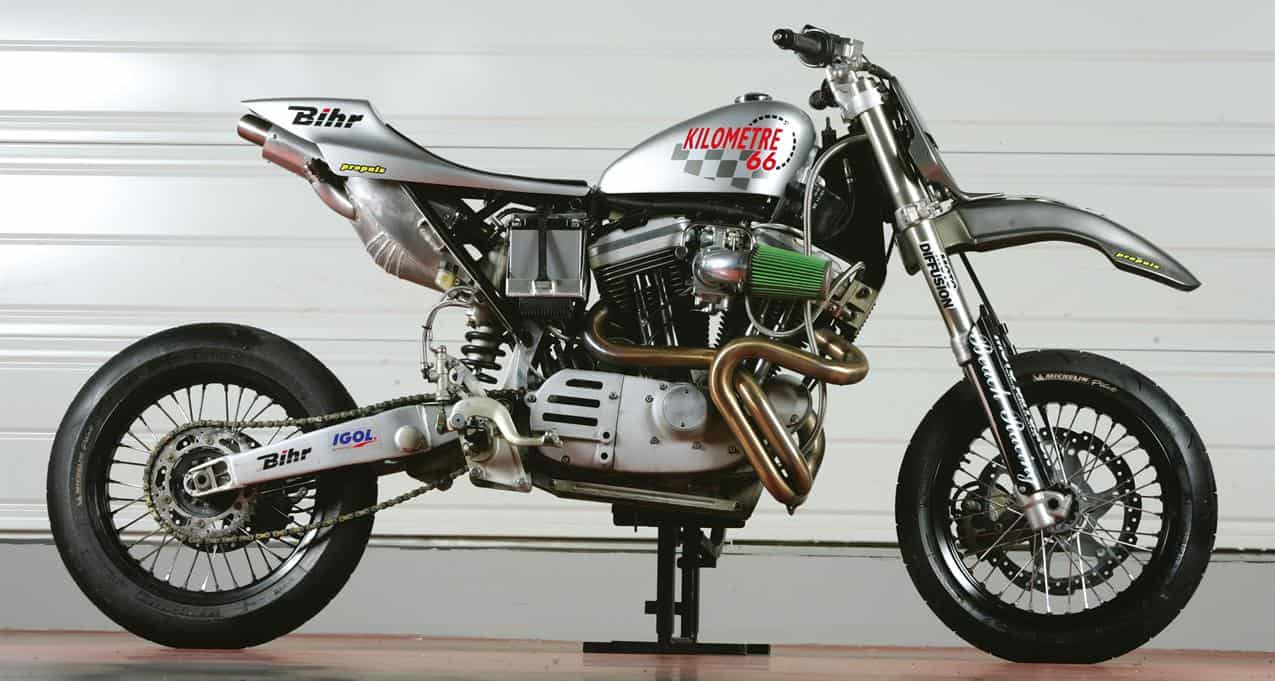 In Autumn last year, Christian decided it was time to put the Harley back together and get it up and running. But this time on the street! After all, it would be a shame to leave an 85bhp motor stuffed full of tuning parts sitting around unused.

The crankshaft is a lighter than stock Buell item, and Screamin’ Eagle supplied the twin-spark electronic ignition and SE203 camshaft. The carb is a 42mm Mikuni item, and for street use the Buell exhausts were replaced with a Vance and Hines SS2R exiting under the abbreviated seat-unit. A Green air-filter was then bolted onto a Forcewinder intake with a Twister air-box.

A new three-litre oil tank was tucked below the seat, and whilst this is a far from ideal location (next to the exhaust)  there was nowhere else to put it. At least there’s an oil cooler fitted, hidden behind the front number board. The eight-litre fuel tank and tiny seat (supported by a steel trellis sub-frame)  help give the bike a hint of XR (Harley, not Honda).

Junking the Yamaha wheels, WRP black rims were laced to hubs from the same manufacturer before Michelin Pilot Supermotard tyres were levered onto the rims. The discs are from a FireBlade, though the twin-piston Nissin calipers are stock fare. And as the front stopper seems to suffer after the first few bouts of heavy braking it will soon be replaced with a six-pot item.

Of course, the Sportrack LB12, for that’s what they’ve called it, rides like no other motard out there. Whilst 163kg (and that’s dry weight)  may seem pretty hefty it’s lighter than both Highland’s V2 and KTM’s 950 SM! So with a claimed 85 horses, the Hog can certainly get a wriggle on when required. But when it comes to the turns, the long wheelbase means that it can’t quite carve the lines you’d want it to..! 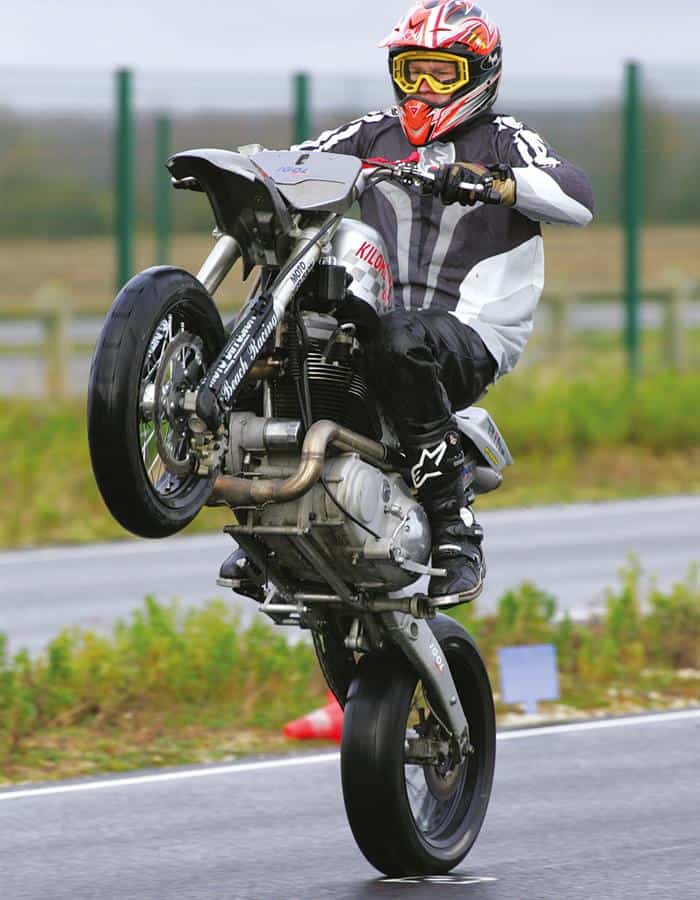 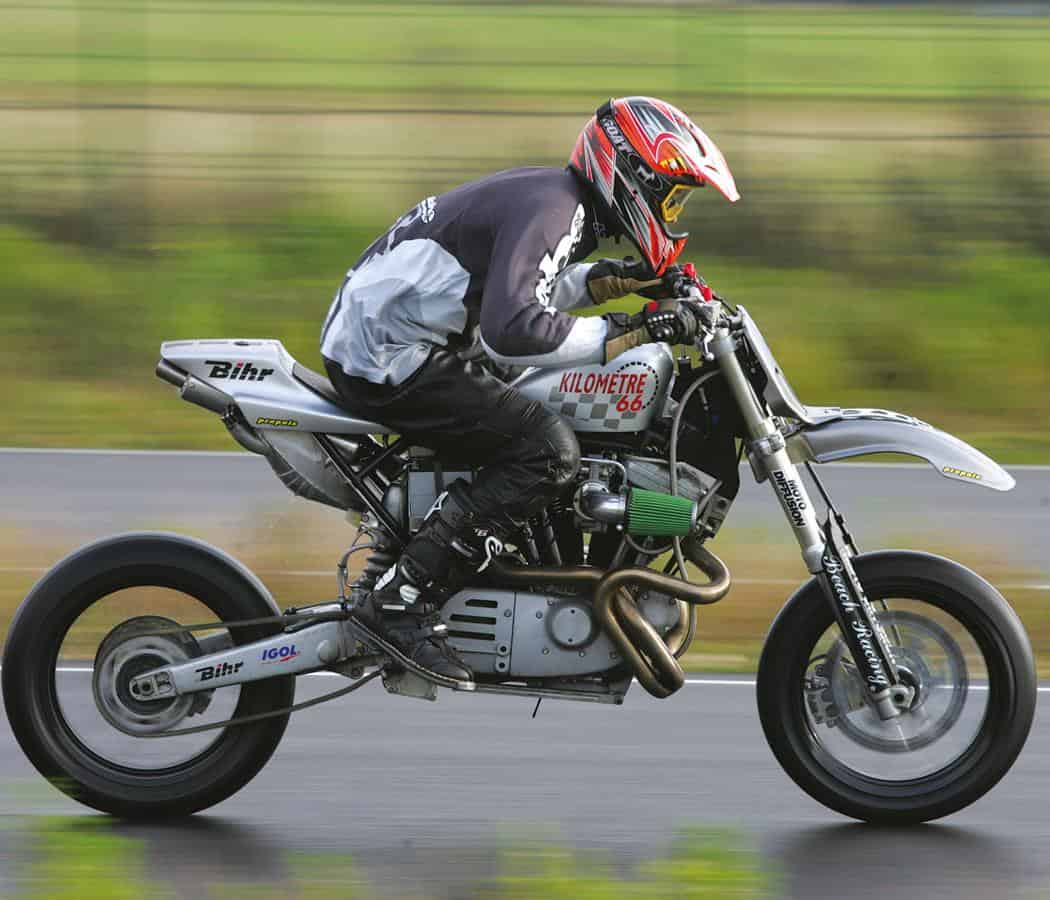 The LB12 has caused quite a stir in the Harley world, Erik Buell himself contacting the pair to offer his congratulations. And now the partners are thinking about putting together a chassis kit for like-minded ‘enthusiasts’,  which could well be available as soon as late-2005.

So it would seem that maybe a 1200 Harley supermoto isn’t quite as bonkers as it first seems. And if the Americans are interested in Christian and Vincent’s creation, could we be seeing a Buell SM swelling the ranks of production megamotos?

Well we won’t be holding our breath, but we’re sure that the LB12 will help spawn a whole host of daft SM creations. So who’s gonna be first with a Goldwing motard, then..?