‘Yee-hah’ came the cry as the big orange beast hit the bank of the dried-out riverbed. A cloud of dust flew from the undercarriage as it launched across the ravine before landing nose first on the other side. It was a phenomenal leap, especially for such a large machine…

God, I loved ‘The Dukes of Hazzard’. As a child, nothing short of a tornado could prise me away from the telly when the familiar country ‘n’ western theme music rang out and Daisy Duke’s denims wiggled into view. But as a car-crazy kid, what really captured the imagination was that big orange ‘69 Charger powersliding down the dirt roads of Hazzard County, allowing the Dukes to evade the clutches of the bumbling Sheriff Rosco P Coltrane.

KTM’s new 950 Super Enduro R could be the dirtbike equivalent of the Duke boys’ General Lee – big, powerful and very orange! But rather than launch their new bike in Hicksville, USA, KTM instead chose somewhere with far more off-road provenance – Erzberg in Austria, home of the Erzberg Rodeo dirtbike festival.

Rubbing shoulders with lush green mountainsides, Erzberg (meaning Ore Mountain) has given up its slopes to open-cast mining and every year tens of thousands of tonnes of rock disappear from its core while tens of thousands of bikers descend on the site for the famous four day event. Towering over the small town of Eisenerz, the tiered side of the mountain sees racers charge up the climb along wide and winding dirt roads in the qualifying ‘Prologue’, before the altogether more extreme Hare Scramble traverses the more rocky bits in between. And all in a country where off-road riding is, for the most part, prohibited! Riding there felt as illicit as running moonshine in Hazzard County…

The Super Enduro is the fourth bike to use KTM’s LC8 V-twin engine. First came the Adventure, then the Super Duke and the 950SM. Both the Super Duke and now the Adventure, use a 999cc fuel injected version of the 75-degree motor, though the Super Enduro runs the original 942cc carburetted mill as this lump is ‘off-road proven’ and gives more control low down, with better throttle response than the injected engine. At least you can’t fault the Austrians’ honesty!

[Interestingly the dry-sumped engine is lubricated from a specially reshaped oil tank sitting at the front of the motor (protected by an alloy bashplate) and the large single radiator wears a plastic guard to prevent damage to the fins and lessen the build up of mud.] 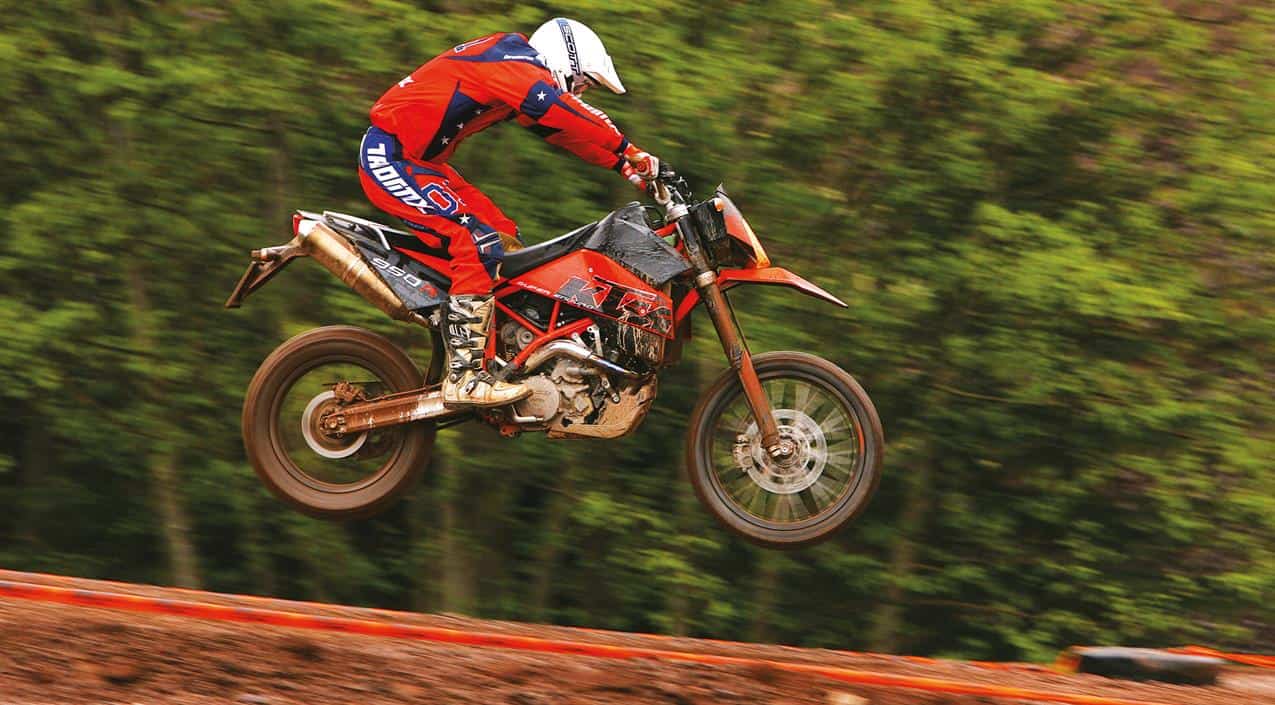 The ‘corporate orange’ lattice work of the chro-moly trellis frame contrasts with the sleek aluminium swingarm, holding a WP link-less shock. At the sharp end, fully adjustable 48mm WP forks will be immediately recognised by KTM owners, though they’re obviously set-up to cope with 260-odd kilos of bike and rider, and the single floating front disc measures in at a sizeable 300mm.

The overall look isn’t too dissimilar to that of the 950SM – a real wolf in wolf’s clothing. Short, sharp panels jut out from the 14.5L tank and firm two-tone seat, whilst the jagged front fender (with its cut-away section to aid cooling) and chiselled headlamp thrust forward like Concorde’s beak. At the rear the twin, cat-equipped, stainless pipes point skywards and the smooth alloy grab handles snake over the rear fender, though to carry a pillion requires a replacement seat and the fitment of rear pegs. Black DID rims and a suitably snazzy graphics kit look neat – though a large ‘01’ on the flanks and a confederate flag would’ve finished things off nicely I reckon.

But why did KTM feel the need to build a monster enduro bike in the first place? Well, they claim it was a natural progression for their LC8 motor, and with their dirtbiking heritage and a blinding big trailie in the form of the 950/990 Adventure you have to believe them… in part at least. ‘Cos the recent launch of BMW’s own twin cylinder beast, the HP2, might just have had something to do with it! With aspirations to be Europe’s biggest bike builder, there must have been a dark cloud hanging over the Mattighofen factory when BMW (who ARE Europe’s biggest motorcycle manufacturer) launched the HP2 last year. KTM OBVIOUSLY would like to steal some of that thunder… 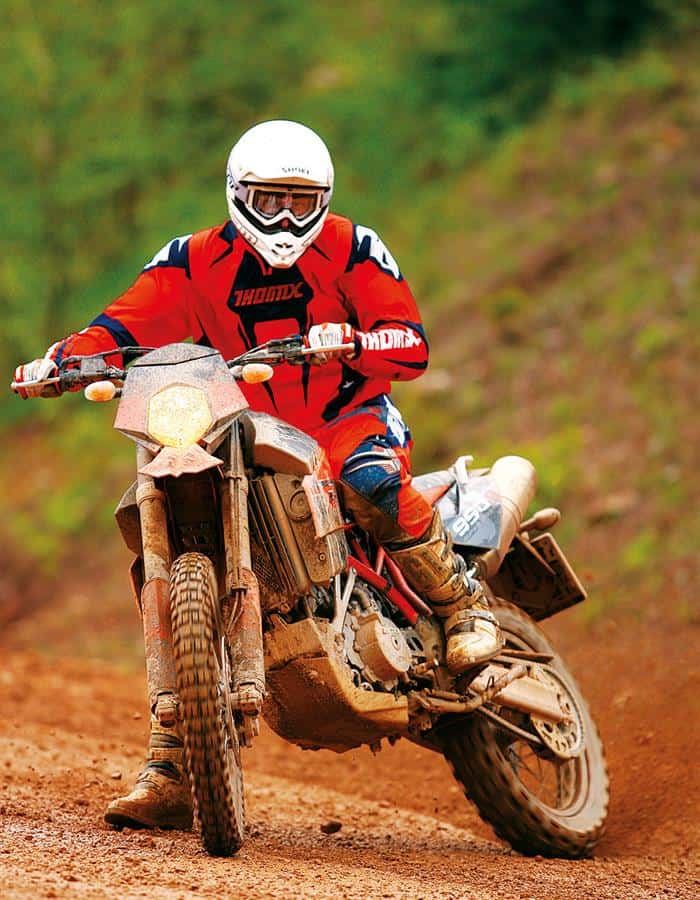 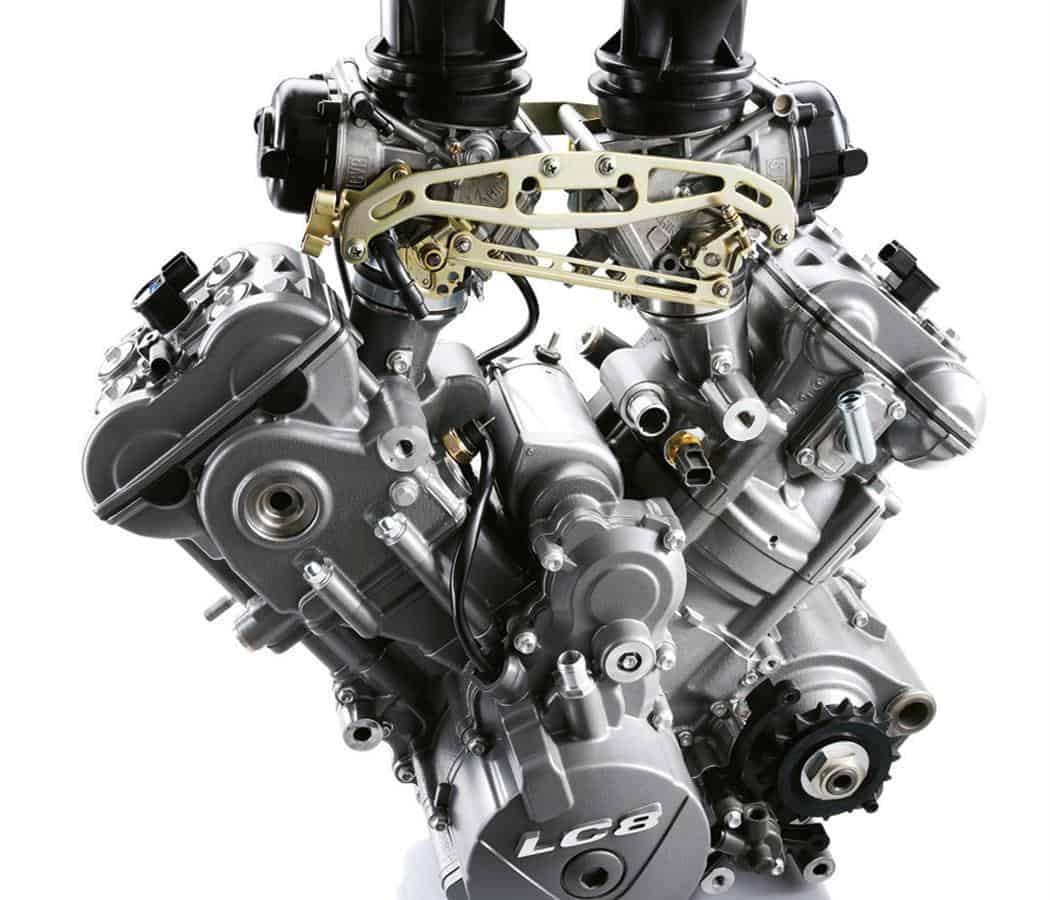 From the lower slopes of the mountain you really don’t get a sense of its scale. Each dirt road looks little more than a single-track and the summit doesn’t seem too far away. Aboard the bike, and heading up the hill, that soon changed. The majority of the tracks were ‘dual carriageway’ wide and the KTM race transporter parked below soon became a tiny orange spec. First impressions of the Super Enduro? Big, fast, and, like the Erzberg, deceptively tall.

The brochure may report the seat height as 965mm, yet parked next to a regular EXC model (920mm perch) there doesn’t seem to be much between them at all. But whereas I could easily get both feet flat on the floor on the enduro bike, the Super Enduro had me balancing on the balls of my feet thanks to a wider and flatter-profiled seat. The 14.5L fuel tank rising up towards the braceless Magura bars simply emphasises the height. Those bars did need rotating round in the clamps to bring them up to a decent height, especially when standing, though I did find a comfortable setting. Bar risers will no doubt be available from the ‘Power Parts’ catalogue.

On the wide, sweeping dirt roads the seat height isn’t so much of an issue as, say, keeping the power in check. With around 90hp at the rear wheel the 950R was always gonna light-up on the way out of turns and the dual purpose Metzeler Karoos simply couldn’t cope with a twitchy throttle hand. Hairpin after hairpin, the rear wheel would slide sideways on the damp surface before swinging back the other way, the back-end gently fishtailing its way down the next straight. Things never really got out of hand though, albeit a more aggressive tyre would do wonders for the level of traction – an area where the slightly longer wheelbased HP2 scores very highly.

With both wheels pointing forwards the Super Enduro could be caned all the way up through the six-speed ‘box, until the point where you ran out of road… or courage. ‘Is there a corner after that crest? Does that sweeping turn suddenly nip up? And was that the back of a giant dumper truck I saw disappearing round the edge of that cliff?’ The 950Rs weren’t the only monster machines out on the mountain that day… 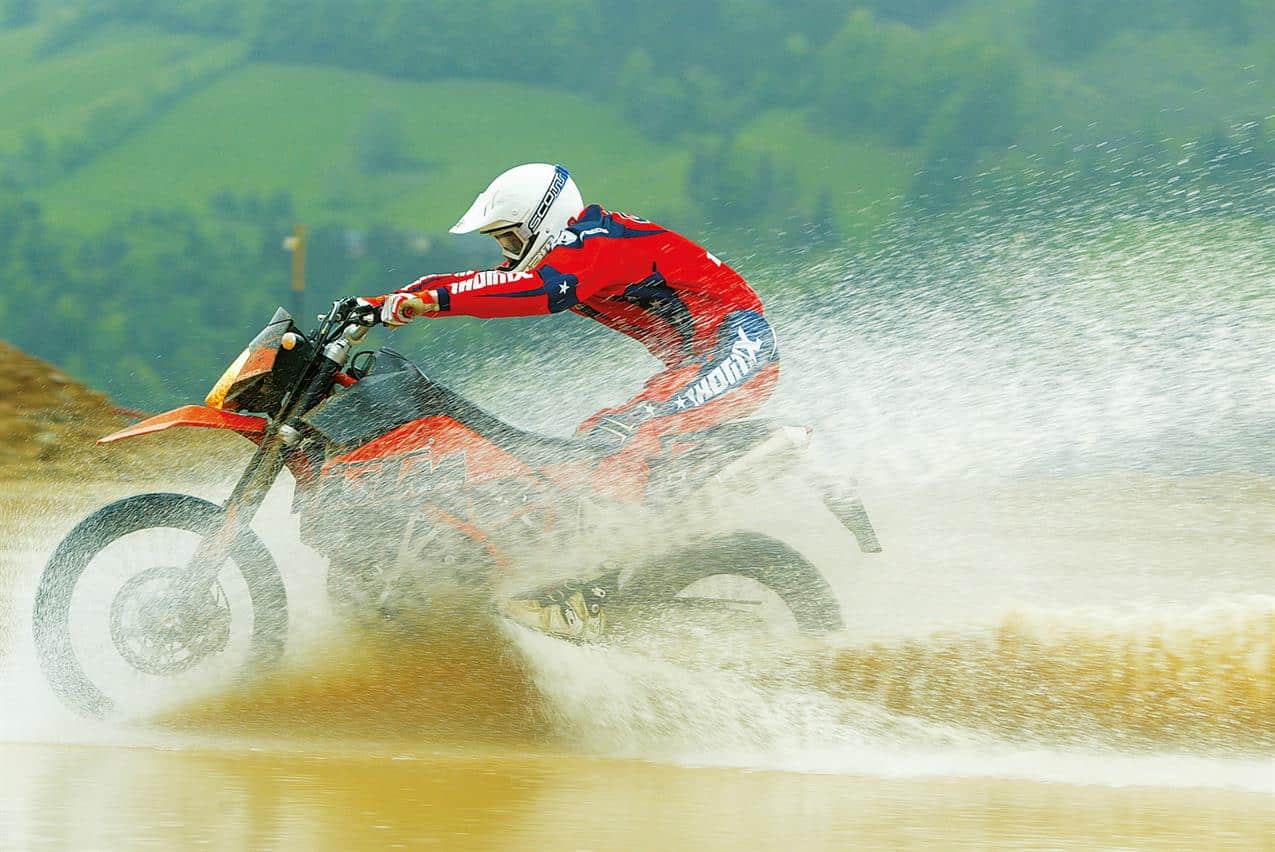 That nagging doubt about what was out of sight tempered the speed slightly, though we were still just shy of three-figure speeds. And at such a velocity the big KTM felt pretty good. Unlike most single cylinder KTMs the front-end doesn’t flap around and unsettle the rest of the bike. It’s not rock solid, feeling just a smidgen nervous on the hard terrain, though I never really had cause to fully back-off. Again, some different tyres would probably alleviate this (easily sorted with 21/18in wheels), and the WP suspension was both box-fresh and set-up quite firm (more on which later). Slightly softer settings would no doubt give a touch more traction and a bit more security on the hard surface.

The 950 motor is an absolute joy on fast going. There may be a slight snatchiness at lower revs (which is known and easily remedied) but keep it spinning above around 3000rpm (there’s no rev counter fitted) and the power is wonderfully linear, the bike surging forward all the way until it hits the rev limiter. It’s amazingly easy to ride in ‘hot pursuit’ mode, just keep things smooth and plan well ahead!

That big floating front disc and twin-pot caliper aren’t massively powerful, though I think it’s fair to say that the last thing you want when travelling at over a ton on the dirt is overly sharp brakes. What you do want, however, is to know exactly what’s going on with the stoppers and the lever pressure is FAR better than on the EXC models. The rear brake is also just about spot-on.

On a small plateau KTM had taped out a short special test with a variety of corners, surface changes and a small jump. It wasn’t ideal 950 territory, and muscling the SE around took some effort. But it sure was fun…

Sliding forward on the seat, you can’t get quite as far forward as you’d really like without really hauling yourself up towards the headstock. Stick a foot out and the tank splays your leg outwards, when you want to get it forwards, meaning the front-end doesn’t always feel QUITE as planted as you’d like (especially in the wet with dual sport tyres!). So on the sharper, flat turns I resorted to squaring off the corner: backing the bike in, brake sliding it around, or simply getting the rear-end to step out on the gas – which seemed to work just fine. 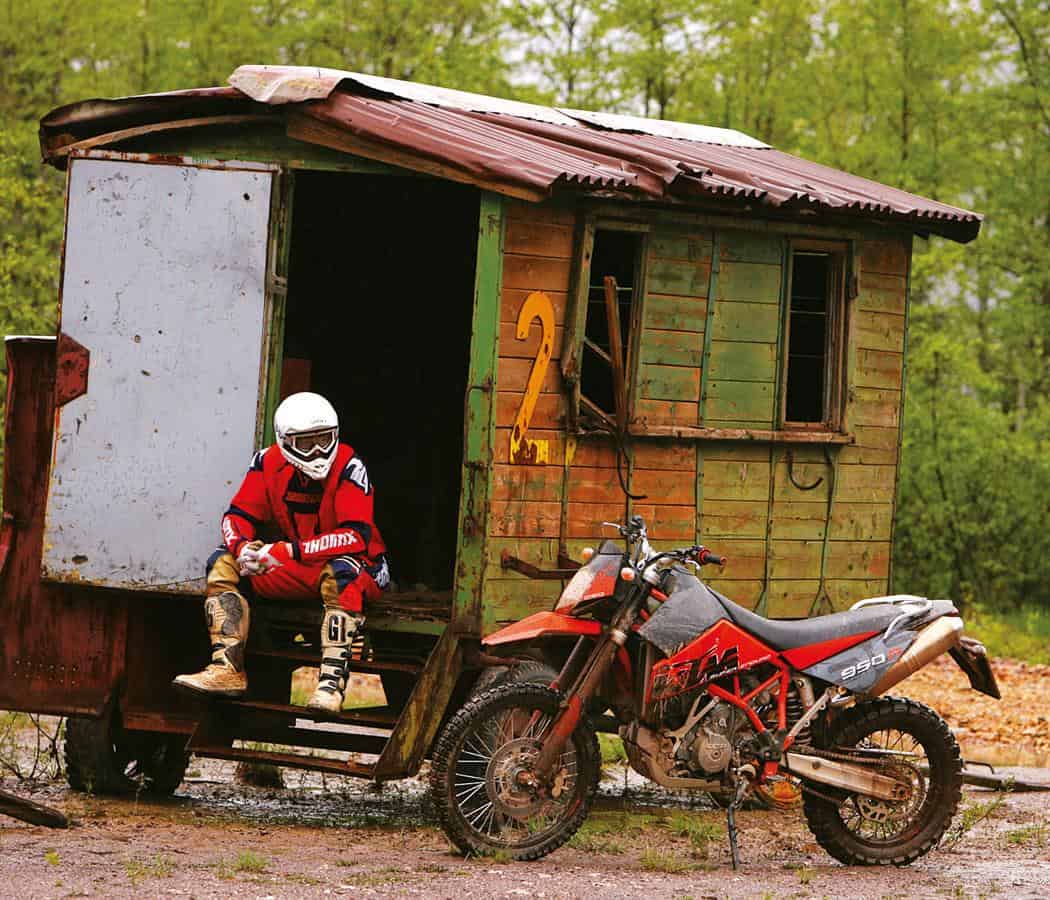 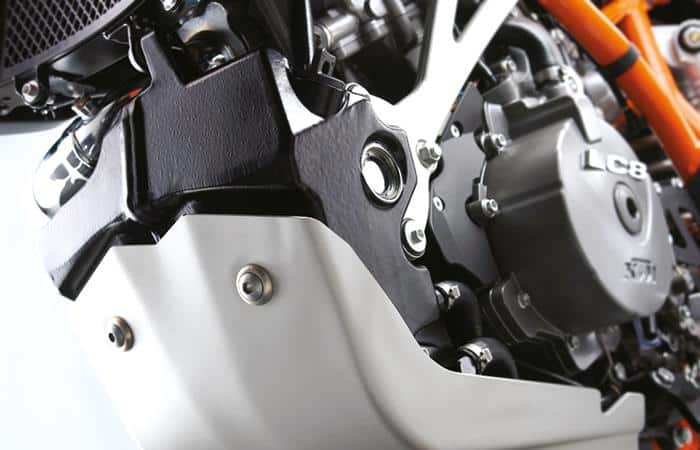 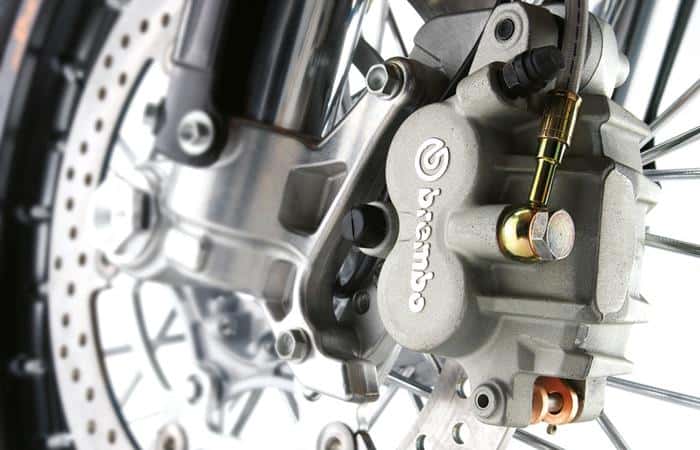 The small jump was less of an issue. Where an HP2’s forks would bottom-out all too readily, the Beemer landing with all the grace of a 60s muscle car being dropped from a great height, the KTM’s WP set-up was far firmer, and the bike touched down without fuss. Likewise on a rough, whooped-out section of the course the 950 could be bounced off the face of the humps without the forks clanging on their bump-stops. Allow for the fact that you’re chucking around a 200kg motorcycle and it was possible to attack most obstacles relatively hard and fast.

Erzberg features some serious hillclimbs and whilst I didn’t really like the look of some of the monster ascents, the shorter climbs were dealt with simply by tweaking the throttle and hanging on tight. The combination of big power and big weight meant the back-end dug down and hauled the KTM to the top, though the really loose, deep sandy climbs needed plenty of momentum to prevent the bike digging in and stopping dead.

Coming back down the steep hills required plenty of care. A tall first gear meant that there was little point employing engine braking to keep the speed in check, and the loose wet rocks were constantly shifting under the wheels. Likewise, on more gentle slopes, slick with mud, there was a slight tendency for the bike to try to get away from you. A lower idle speed (and knobblier tyres) would’ve helped keep things in check. Apart from this, the 950R could be trickled along quite happily, assuming you allowed for the slight lack of steering lock and – when you needed to take a dab – the height.

Topple off the 950R, as I did a couple of times turning it around in sand, and the ally grab handles make picking it up relatively easy. Watch those cans though, as the catalytic converters mean that they get obscenely hot. I found out the hard way..! 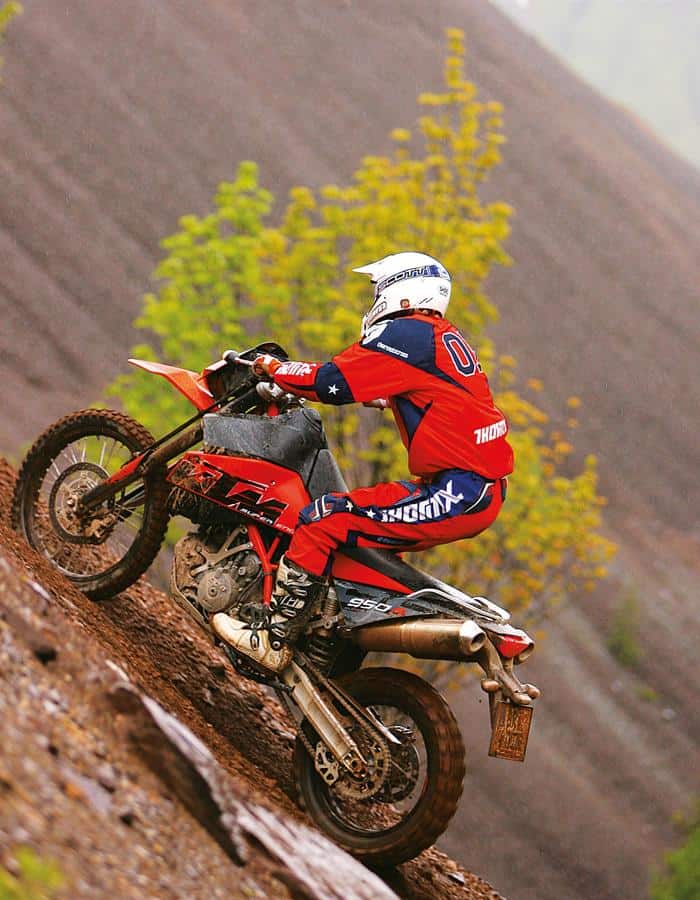 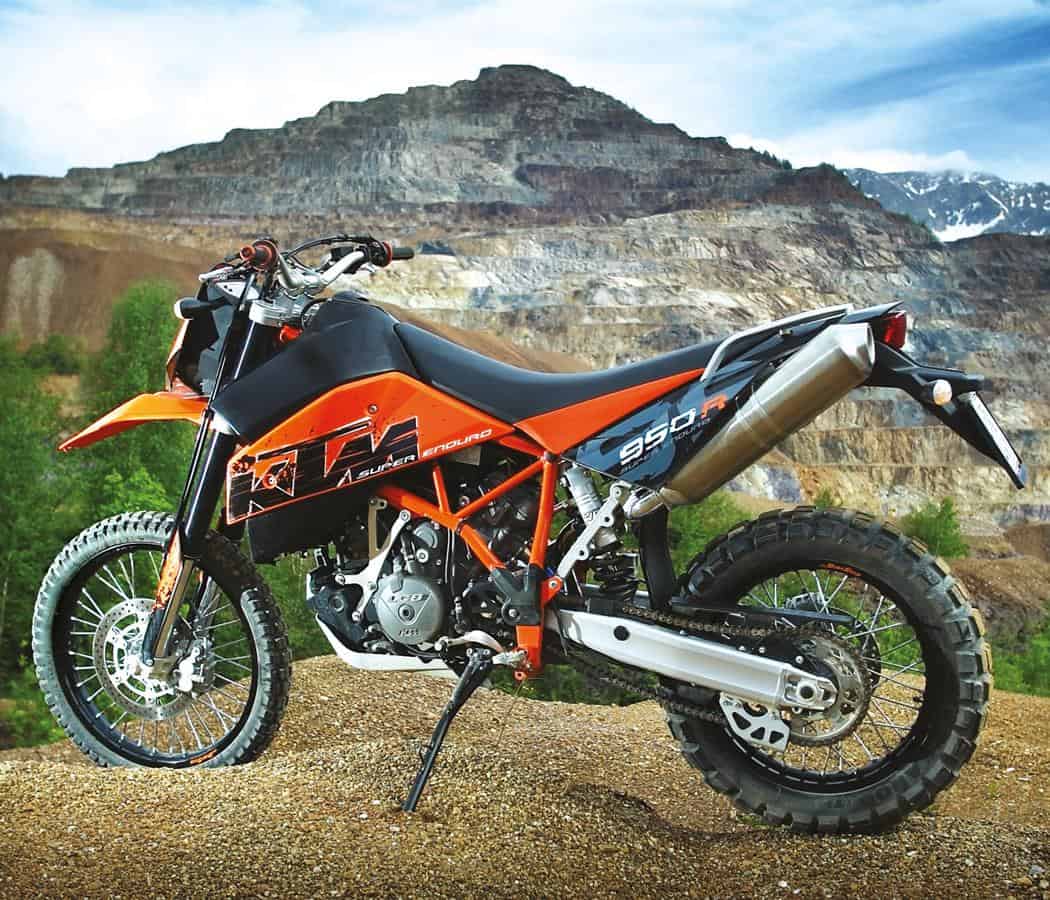 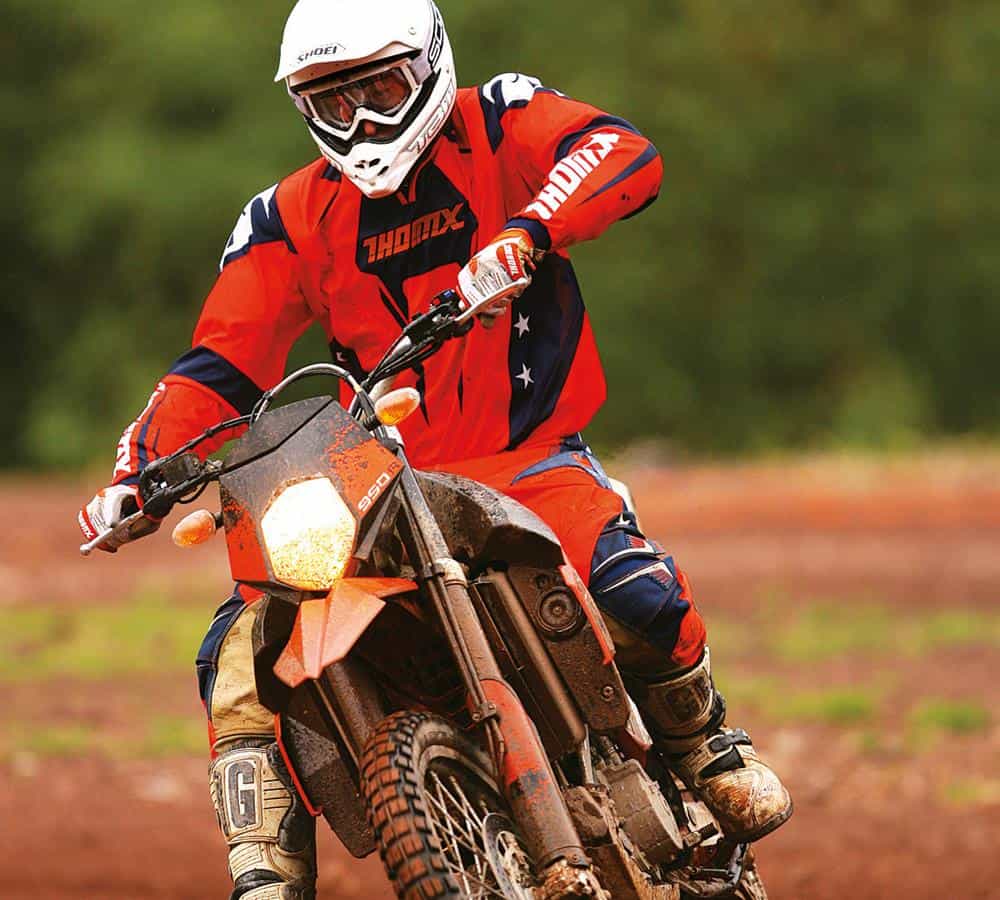 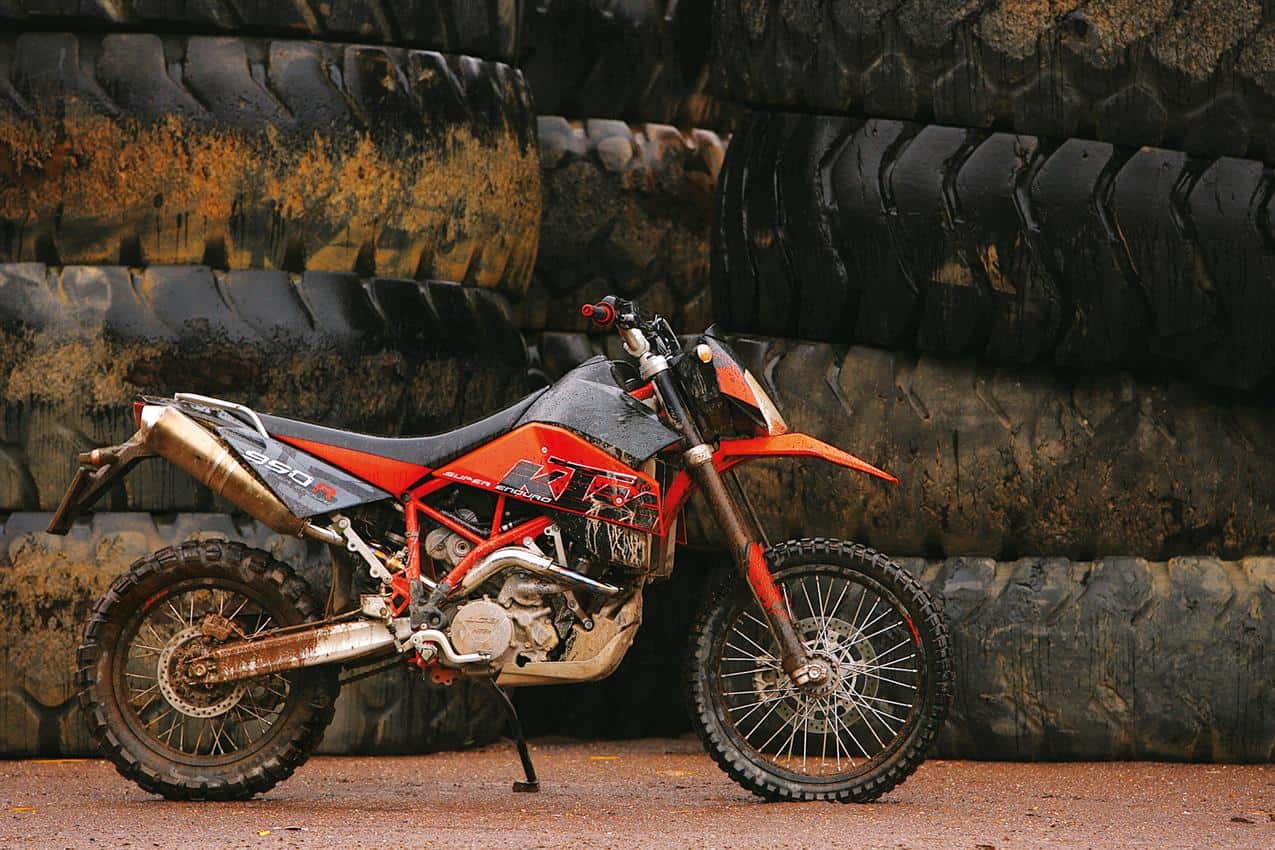