The Ossa Explorer is a unique trailie and some might argue a conceptual masterpiece, but what’s it like to live with month in, month out?

There’s an interesting lane a couple of miles from my house. It’s an ancient section of Watling Street and a thousand years of rural traffic have eroded the surface, leaving parts of it sitting almost three meters below the surrounding fields. In the summer it’s easy to navigate but in winter it can be a challenge to make a clean pass to the top.

It’s February and I’m enjoying my debut ride on a newly purchased 2014 Ossa Explorer. At the southern end of the Street a torrent of water is flowing towards me along deep ruts left by the recent passage of 4x4s. This could be interesting. Or perhaps not… hooking into second gear and shifting quickly into third the Ossa romped effortlessly up the rutted holloway.

Halfway along I took the gnarly route over some jutting tree roots and up the side of the steep bank before dropping back down into the fast flowing water, feet-up all the way to the top. I’ve never cleaned Watling Street so easily. At last I’d found exactly what I’d been looking for: an ultra-light, agile, torquey trail bike with a decent seat and useful tank range.

Five months on, my respect for the bike hasn’t diminished… however the first few months of ownership have been a bitter-sweet affair. But before getting stuck into the nitty-gritty details of what’s happened, it’s worth giving a brief overview on the Spanish factory’s take on their trail/trials concept. The Explorer is based on Ossa’s proven 280i trials bike: a fuel injected, reverse cylinder, 280cc masterpiece of automotive packaging which packs a lot of lateral-thinking into a very small space. Add a dual seat, an auxiliary fuel tank plus some angular, stealth bomber style bodywork and all the stuff you need to make a 280i road legal and you have the Explorer.

At a claimed 74kg the stylishly svelte Ossa is the lightest in its class but there’s a downside to this obsessive attention to weight saving and it comes at a cost which may ultimately prove too much for some customers. Certain aspects of the design are just too flimsy for regular trail use and during the first few months, bits dropped off my Explorer with alarming regularity.

First to go were the lightweight side panels – held in place by frail looking plastic tabs which locate under tension into a recess. It’s a neat idea but ultimately ineffective, and when the going got rough the panels would randomly self-eject into the countryside. Judiciously placed tie-wraps sorted the problem but a pair of sidecutters now have to be carried in the tool roll, just in case the panels have to be removed, thus cancelling out any weight saving.

The next thing to fall off was the rear mudguard. On the Explorer this is an elegant plastic cantilever design located by three fasteners. Unfortunately the lights, indicators and a registration plate are all hung off the cantilever’s extremity furthest away from the chassis mounting points. If only Ossa had incorporated some strengthening ribs or better still, a proper subframe into the mudguard design it may have stood a chance. But they didn’t… and within a few outings the mudguard succumbed to the combined weight of itself and a bit of extra mud and sheared off across the mounting points.

Part of the blame for the mudguard’s failure might lie with the Explorer’s budget suspension. In an effort to keep costs down, Ossa haven’t used the high quality Marzocchi forks and Ohlins shock from the 280i. Instead, the Explorer has an Olle rear shock and 40mm forks of unknown origin. There’s no manufacturer’s credit in the spec sheet and no identifying marks on the front suspension. After prolonged use on fast trails the ride becomes very choppy, possibly due to oil cavitation and I suspect vibration contributed to the mudguard’s early demise.

After emailing the importer requesting a replacement, the message relayed back to me stated that plastics aren’t covered by warranty and a replacement would have to be ordered from Ossa in Spain. Four months later I’m still waiting. In the meantime I fabricated a subframe loop and attached the broken mudguard section to it. The extra strength provided by the subframe also means a tool bag can now be mounted on the mudguard. So far, so good. 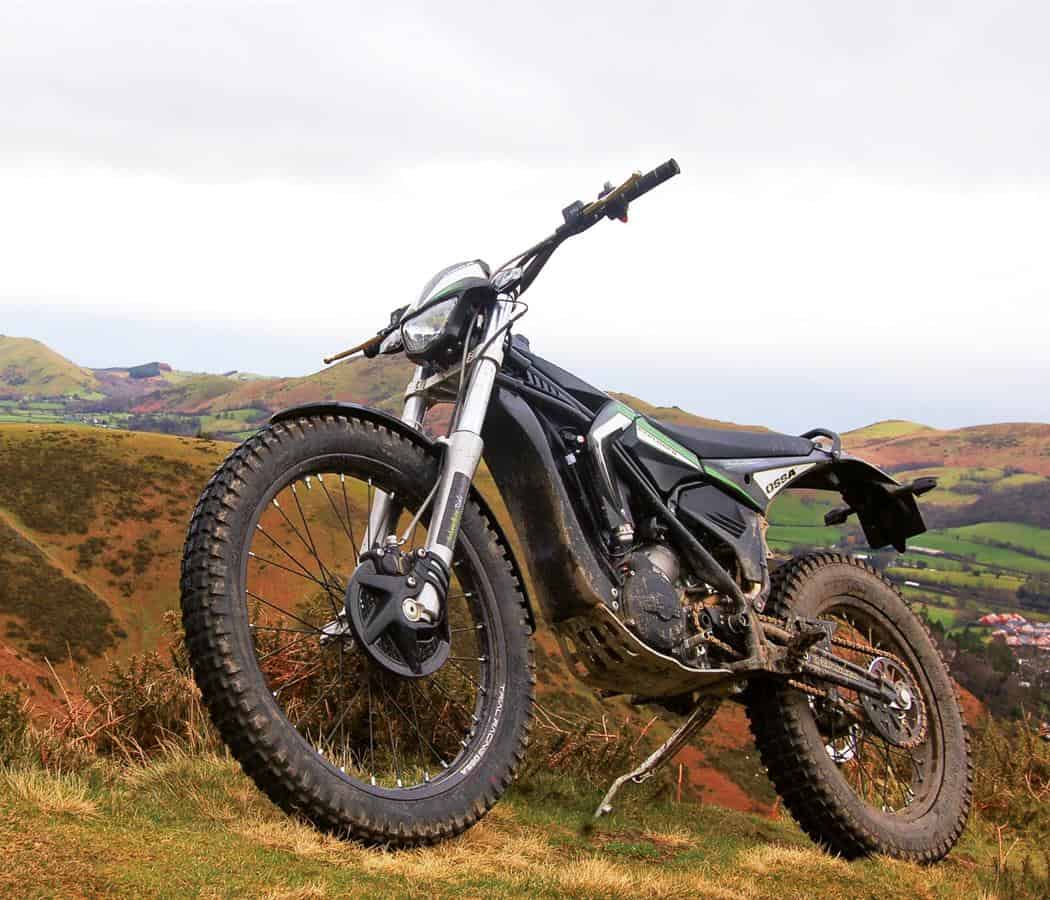 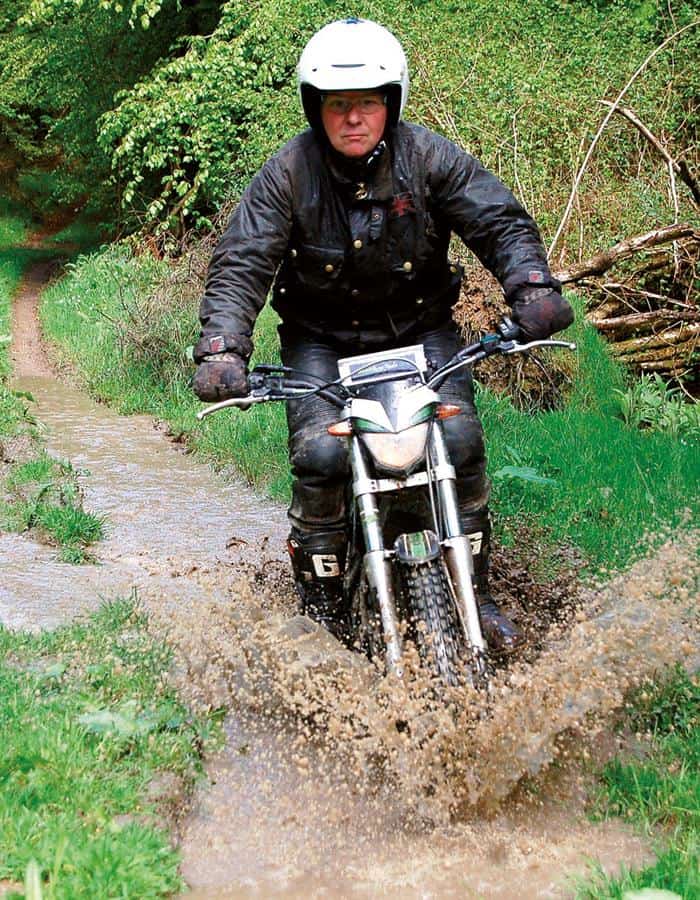 The damage had a knock-on effect which created more problems. The engine started cutting out intermittently on long descents and stalling at traffic junctions. It transpired that when the mudguard dropped onto the back wheel, the brake-light feed became chafed and was shorting-out. Modern engine management systems don’t like fluctuating voltages and this prompted the ECU to throw a wobbly, hence the problems on descents and at junctions. Once discovered, it was an easy fix but it underlined just how sensitive modern ignitions are to relatively minor problems.

On the plus side the Kokusan engine management and indirect fuel injection performs beautifully and Ossa’s development engineers have done a fine job with the Explorer’s fuelling. Interestingly, the ECU has two fuel maps but the alternative map can only be accessed by an optional handlebar switch available from Ossa. Since launching the bike the factory has developed a number of fuel maps for the 280i engine and apparently one is a ‘road’ map used by riders during events such as the Scottish Six Day. I don’t know the exact details but I’m guessing it richens up the fueling to keep the engine safe at sustained high revs. Could be useful if you were contemplating entering LDTs on the Explorer.

When collecting the bike from the importer I noticed it canted over excessively on its side stand. During the next few rides this angle became more pronounced and the bike would teeter precariously every time I parked it to open a gate. Closer inspection revealed that the sidestand bracket was working loose. The sidestand is a beautifully forged alloy item but its mounting bracket is secured to the swingarm by three hopelessly optimistic 5mm fasteners. Just like the mudguard and the panels, the sidestand is a good design that’s been poorly executed.

Fearful of damaging the swingarm should the bracket pull out, I left the sidestand clipped to the neat little retaining lug provided on the swingarm and leant the bike against a fence when opening gates. I emailed the importer explaining the problem and asked for advice. There was no response and a few weeks later the sidestand assembly fell off, jamming itself between the tyre and swingarm locking the back wheel. Fortunately I was only doing about 10mph on a trail at the time, but could just as easily have been doing 40mph on a busy main road.

With no prospect of assistance forthcoming from Ossa, the sidestand repair would have to be a DIY fix. Drilling out the swingarm I uprated the fasteners to 8mm diameter and supplemented these by bonding the mounting plate to the arm itself. The bike now leans over at a more sensible angle and I’ve experienced no further problems. Fortunately I’ve spent 25 years of my working life in an engineering environment solving problems of a similar nature in other applications. In my experience off-roaders are generally very practical when it comes to finding a solution to a proble, but it’s debatable however, whether the average customer would be happy to HAVE to make these running repairs in the absence of any product support from the manufacturer.

Have these initial problems soured my relationship with the Explorer? Well surprisingly, no. In the great scheme of things they’re relatively minor issues and the Explorer remains an extraordinary machine which is pleasure to own.

Still, Ossa’s attitude to the problems is rather baffling. Having exhausted all reasonable avenues with the UK importer, I contacted Ossa direct and despite receiving two very polite emails from the company’s headquarters in Girona reassuring me somebody will be in touch shortly to resolve the problems, nobody ever has.

I’ve even called the contact number on the factory’s website but it simply rings out. Ossa are a very small manufacturer who should be applauded for creating an outstanding product, but their flakey lack of response falls woefully short of acceptable customer service. According to the blurb which came with the bike, the Explorer is covered by an impressive two years parts and labour warranty. However, if nobody answers emails or phone calls it’s difficult to confirm whether any warranty actually exists.

With the reliability on my bike now sorted the only downside for me are the gearbox ratios. The Explorer’s cluster is taken straight from the trials bike and has a typical trials configuration, comprising of five ultra close ratios and then a very tall sixth gear to keep the revs down on the road. This is OK for scudding between trials sections on a few back lanes but it hobbles the Explorer’s ability to cover any kind of distances on combined road and trail routes. I’ve geared it up to the point where I can’t really do much more, and I’m still hitting sixth gear on the faster trails and it still feels strained on tarmac. If only Ossa had done what Gas Gas did with the Pampera (at least with the later versions), and created a specific set of trail ratios, the bike would be virtually perfect .

The Explorer’s cassette-type gearbox means that if alternative ratios were on offer it would be a relatively straightforward job to install them without having to split the cases. 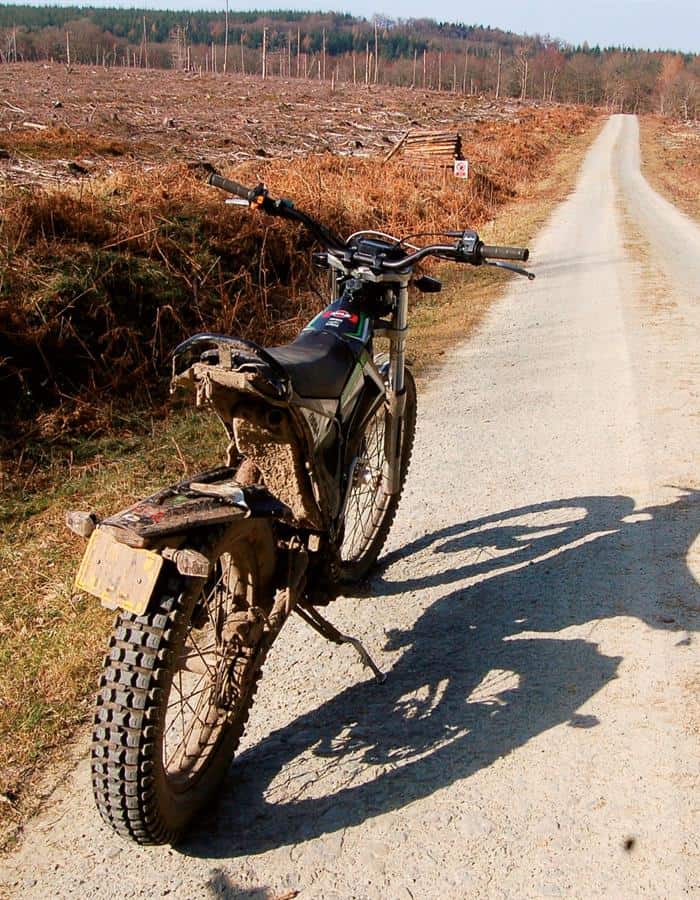 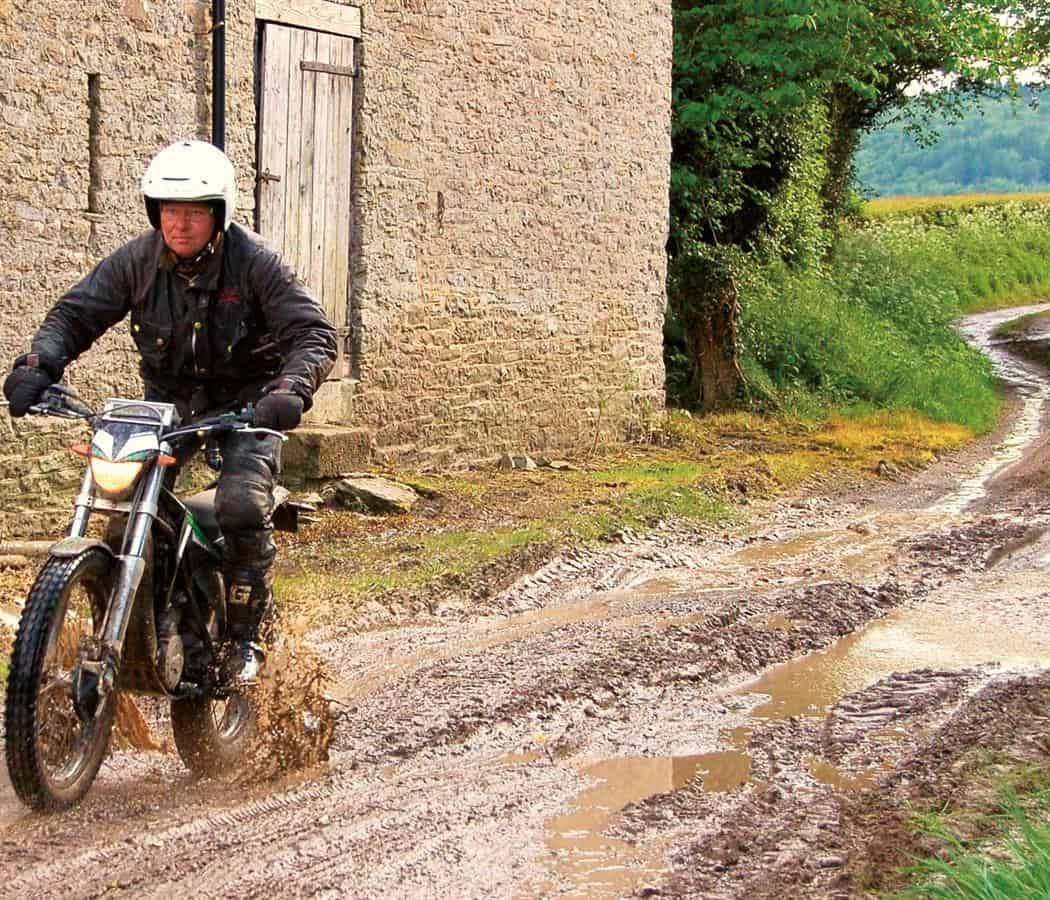 All of which begs the question who were Ossa aiming at when they launched the Explorer? It’s too extreme and too highly strung to be used as a common-or-garden trail bike. The wheel bearings on my bike were worn out after only fifty hours use and at the same time the rear suspension needed stripping and re-lubricating. Ordinarily not such an onerous task, but with such a lot of kit packed into a compact package like this, overhauling the rear linkages isn’t a five minute job. Clearly then this isn’t a bike you can give a quick hose down and then park it in the garage until the next time you fancy a ride.

Conversely, the budget suspension suggests Ossa aren’t targeting hard-core (or competition) users, so just who do they hope to attract as customers? Competition riders tend to be a self-sufficient bunch and a small manufacturer can often get away with sketchy customer support in that market. But the leisure sector is quite different. Ossa won’t be able to simply ignore customers with technical problems, hoping they’ll go away.

In summary then, whilst the core bike really is superb. It’s some of the Explorer-specific peripherals bolted on in order to make it road legal, which let it down. Most of these issues can be attributed to a simple lack of development – understandable when a small volume manufacturer launches such a radical, avante-garde design. But is that an acceptable excuse, or should we just overlook quality control issues for the sake of being able to buy and ride a unique bike like this?

And should that put you off buying one? I guess it depends on how confident you are in your ability to deal with the niggling problems which may arise. That said, there’s nothing quite like it out there and if you think it will suit your style of trail riding, I don’t think you’ll be disappointed with the fun it brings…

Rob Dixon runs Adventure Ride – guiding people (by trail) around picturesque parts of the British countryside, aboard his Ossa Explorer. See his ad elsewhere in this issue. If you fancy a ride out with Rob you can contact him on bob@adventureride.co.uk 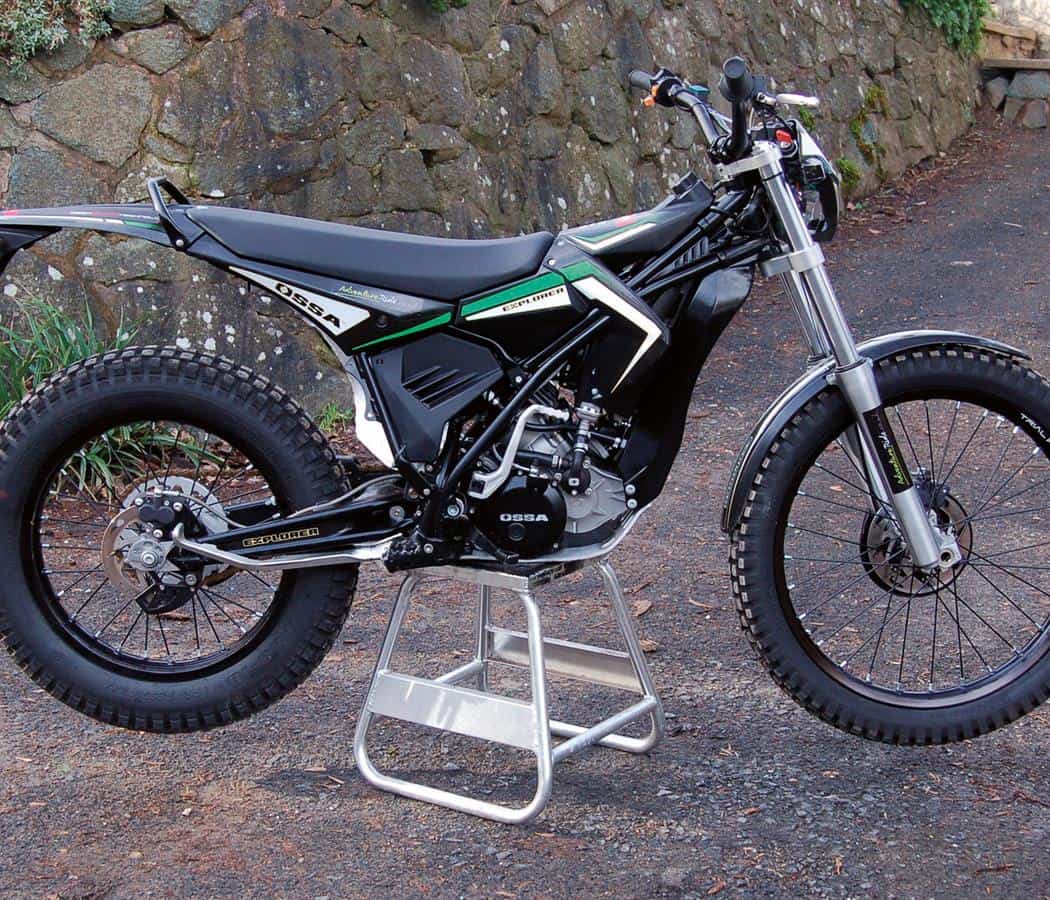 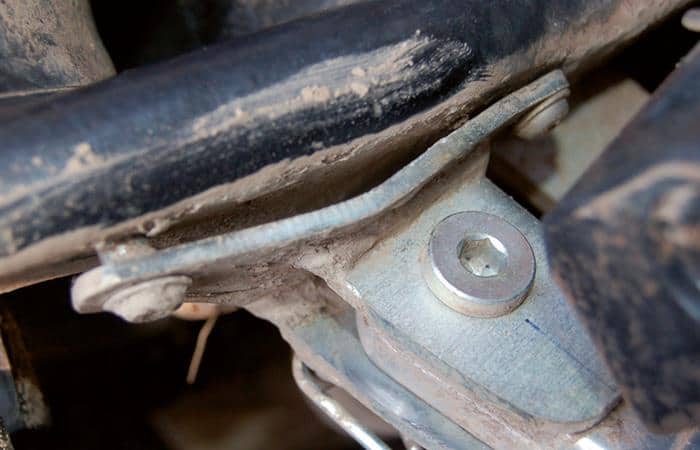 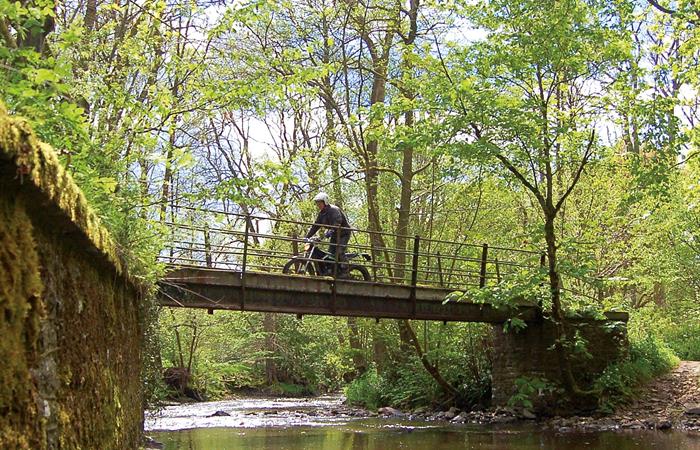