Following Oakley’s Airbrake, Scott needed to create their own new ultra-top end goggle, the Prospect is it

I’m a bit of a Scott fan on the quiet (or not so quiet). I’ve always thought they’ve made some of the best lenses from an optical clarity perspective. I think their Hustle goggle is a great bit of kit, so comfortable, so no-nonsense. And their sand/dust goggles have saved my bacon for three years running in the BMW GS Trophy. They’ve been my go-to goggle for years.

However of late they’ve been losing market awareness, possibly sales too. Upstarts like 100% have stolen some of the middle ground with some aggressive marketing and keenly styled kit. And closest rival Oakley have blown the glass ceiling for goggles with their Airbrake. Who’d have thought we’d pay £140 for a pair of goggles, let alone £200 for the totally top-shelf ones, Prizm lenses and all? So without a doubt Scott needed to get back into the market in a dynamic way.

And so a new pair of Prospects has landed on the RUST editorial desk, and you can see they’re something of an answer to the Airbrake, following the trend for bigger lenses and outrigger systems for strap attachment. Now while Oakley’s big thing is their rigid ‘Plutonite’ lens (almost like a visor), Scott have stuck with Lexan for the Prospect. The new lens is 1mm thick, mind, so it’s at least semi-rigid and called ‘TruView’ again the emphasis is on optical clarity.

And where in the past fitting flexi lenses into the goggle frame has been a bit of a faff, Scott has followed Oakley, and created a clip-in system called Lens Lock that will make lens changes a breeze in the future. Not before time!

Field of vision is all part of this new trend, too, and the Prospect has that, enough to allow the fitting of a whopping 50mm roll-off (aka works film system or WFS50), complete with fancy ridges to lift the film slightly so it doesn’t stick. Ah yes, and with four posts the WFS system can be popped-on in seconds, again saving more faff. And as you’ll find with all quality Scott goggles, there’s the three-layer foam on the frame, so they’re very comfortable and do a good job of absorbing sweat.

Now our test sample has only just arrived, we’re told ours is pre-production and so we don’t have WFS to play with yet, just the plain goggle. But we’ll see how they fair. They fit well with our Nolan N53 mx lid, in our Touratech Aventuro adventure lid they’re a slighty tight fit, but they do just squeeze in. We’ll let you know how they perform across both off-road and adventure arenas.

Ah, one last thing. The Prospect comes in at what now seems a reasonable £79.99 ($89.95 in the US), so it substantially undercuts the Airbrake while offering just about every feature except the rigid lens. That’s fighting stuff. Welcome back Scott! 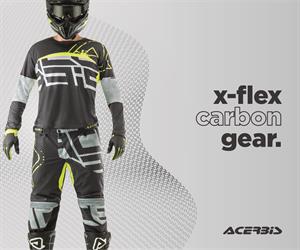