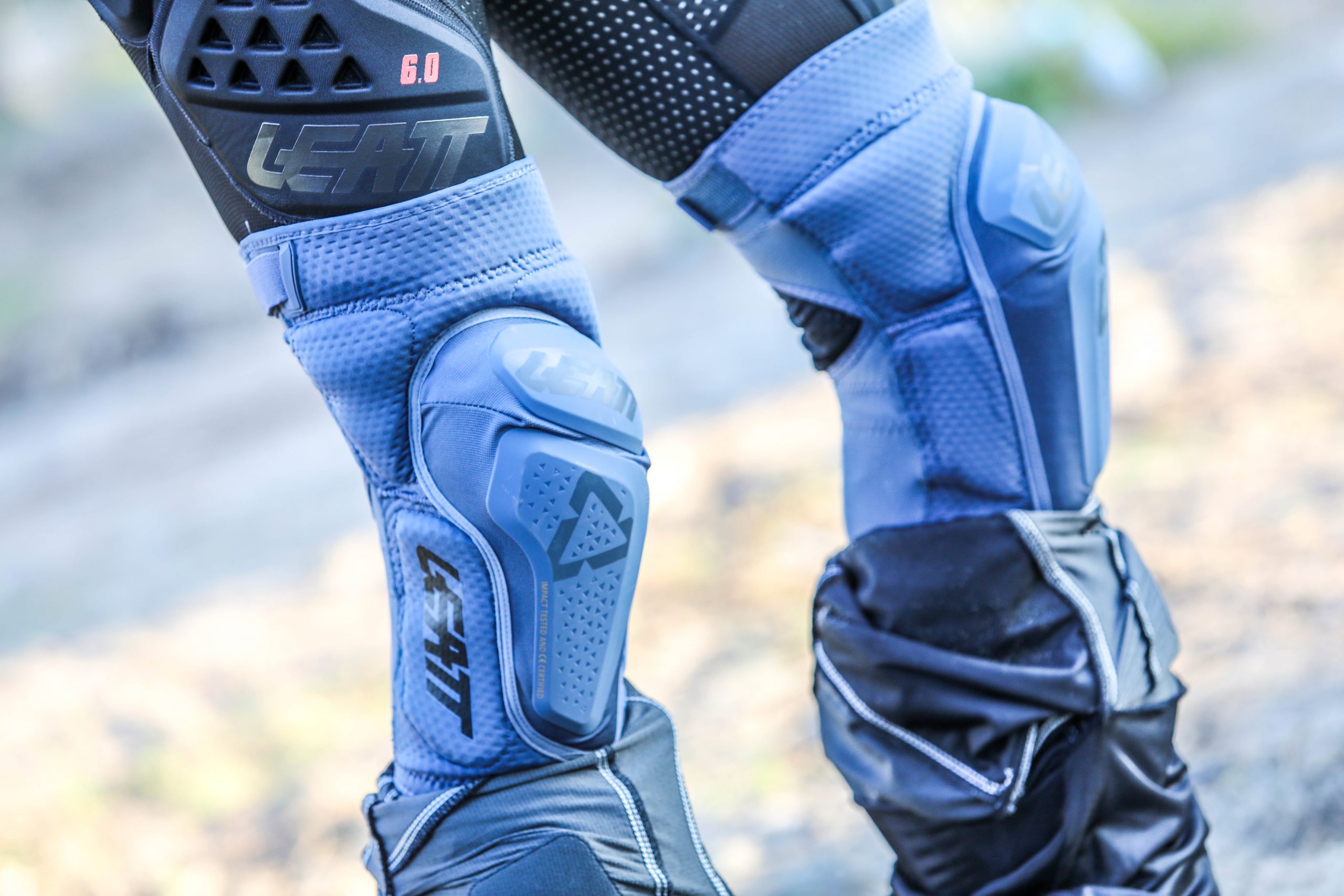 We test Ryno’s theory – “What you Brace makes you Weaker”

Ryan ‘Ryno’ Hughes needs no introduction – the tough man of AMA motocross, teacher and evolving life guru – so when we came across this podcast on Gypsy Tales (link) we decided to test his theory and ditch our knee braces in favour of knee guards and give his theory a go.

In short, Ryno’s view is that limiting your range of movement by bracing perceived weak points only makes them weaker. His theory is that you should build your natural defences – yes, your own muscles that support those areas, work on flexibility and range of motion and together these will provide you far greater protection than a brace will. Prevention, according to Ryno, is the key. Correct riding position, being able to feel the bike between your knees and using your full range of motion on the bike to prevent crashes all combine to make it safer to ride without knee or neck braces.

So off with the knee braces (custom made CTi in my case) and 30 riding hours later with the various knee guards, do we agree with Ryno, or not? 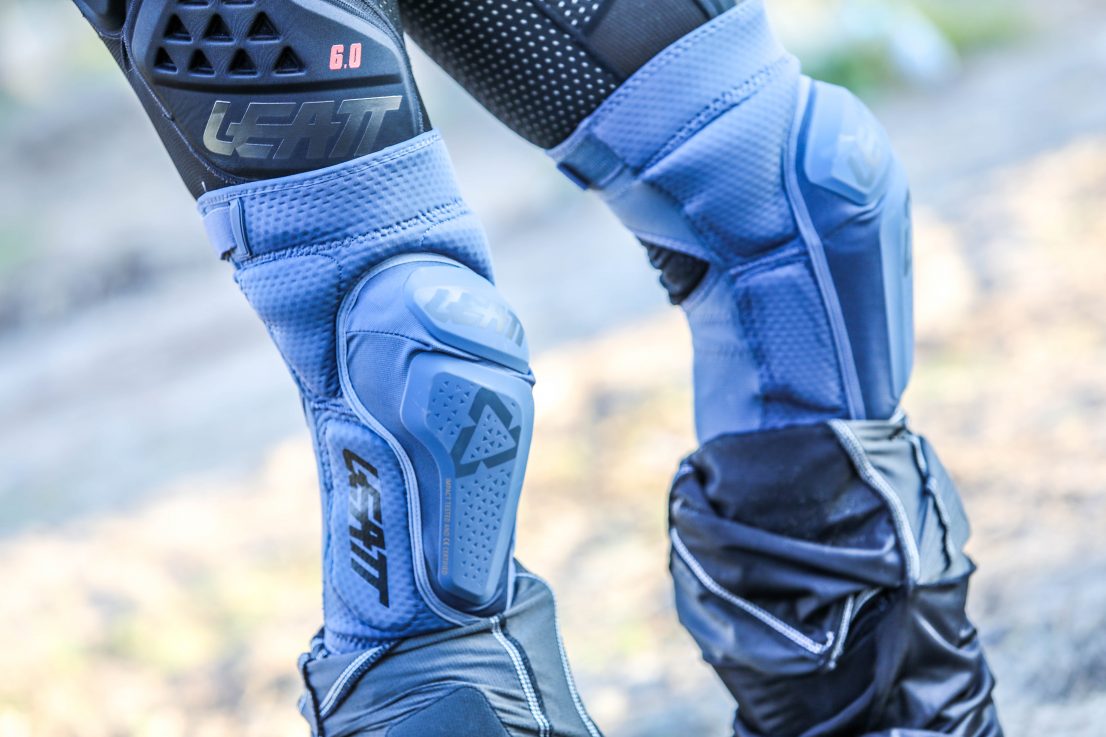 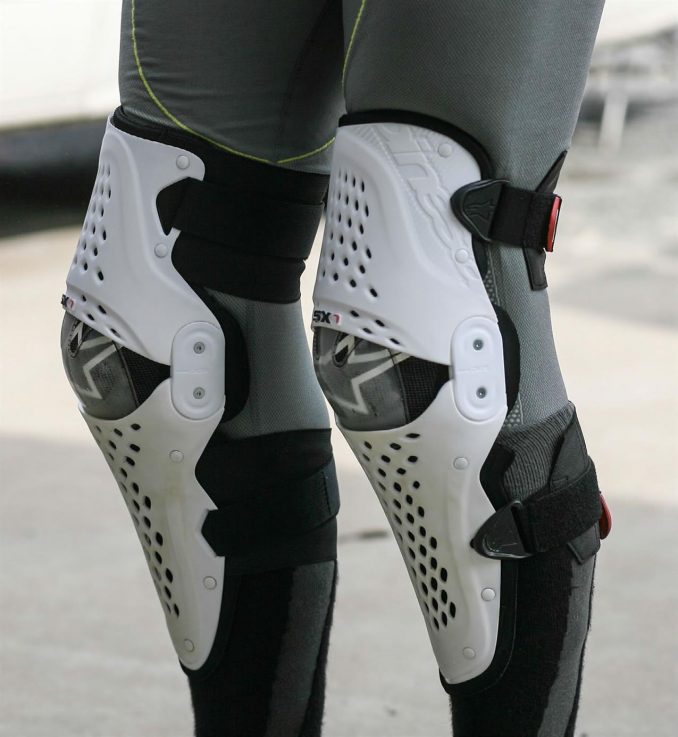 The first thing I was aware of was the psychological shift – I’d become so used to riding with braces that it did require a mind-shift. I was comfortable enough making the switch riding in deep sand but perhaps less so ripping hard pack and rocky terrain or on the motocross track. It also came down to the knee guards themselves – they are not all made equal as we discovered. What I noticed immediately was the freedom of movement and I loved that. Next was not having to repeatedly adjust the knee braces back into position.

For the most part I was able to forget I was wearing guards, but my feeling of comfort and security was directly linked to the guard I was wearing at the time. I’d be remiss in mentioning that I added knee, hip and glute exercises into the mix as Ryan Hughes had suggested to see of this added any range of movement and strength – which of course it did.

In conclusion, I found a really good guard that I had the confidence to ride in and forget about, feeling my knees would be well protected in a crash as well as being able to move freely with no trail rash – so I suppose between the exercising and a great pair of guards I’m a convert. I feel like I’m able to move around the bike better than I have in years and frankly I am better balanced and can really feel the bike between my knees – so for me I’ve continued to leave my CTi’s in their bag and I’ve chosen to ride with the Leatt 60. 3DF’s for now.

I did the brace versus guard journey 20 years ago. I, too, got all the way to custom-made CTi’s, but long ago returned to guards. Riding trail for hours I’ve always found braces simply too uncomfortable and too restrictive.

Then at the end of 2019, having to ride without my regular SX1s, I took a dab on a wet rock while testing a WR250F, my foot slid out sideways and in an instant I clean snapped my ACL. After that, and an operation, I took to wearing a set of Alpinestars Bionic 10 knee braces. For a while they gave me the psychological support (and no doubt some physical support) to feel safe riding again, but with time I’ve found the discomfort too much and now I ride mostly in A-stars SX1s, which work for me for both trail and adventure. And I try and stay feet up as much as possible!

So, it’s a case of ‘me too’, only I’m not going to get scientific or physiological, I’m just happy with knee guards.

Between JB and myself we chose a few options:

A simple design with a good hinge and patella cap. Padding inside is good and the wide elasticated click and link fasteners held the guard in place all day without slipping. They’re slim and you can get a good feel with them when squeezing the bike. Also, you’ve got to love the flush-fitting double hinge that doesn’t snag your pants or rip into your bike’s tank/seat.

WM: As an older pair, the side knee pads had folded over on one side and caused some minor irritation after a few hours, nothing serious but I would have to replace them every so often to keep them sweet. The shin guard length (for me) could have done with being about 1cm shorter. If you ride standing up with your knees back (as you should) they tend to dig into your shins after a while.

JB: They were mine before Warren nabbed them. I just wore them every ride, never thought much about them. They did their job without ever really being noticeable. Just what you need. 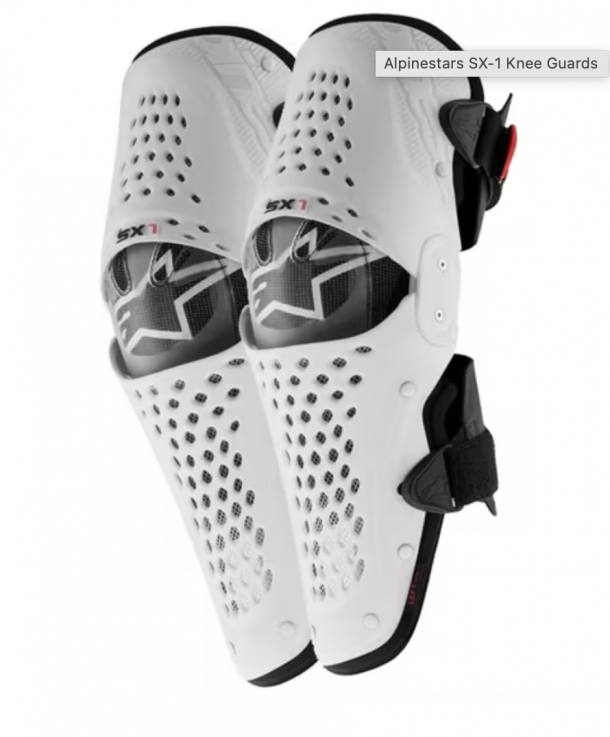 Same design as the old ones which we loved but now made with a semi rigid high performance fully ventilated polymer which makes them lighter, but they keep the same good anatomical hinge and patella cap protection. The padding inside is a little plusher and they maintain the same wide elasticated clip and link fasteners. They’re slim and you can get a good feel with them when squeezing the bike.

WM: My main gripe is the inconsistent sizing compared to the original SX1’s (in Size L) which fit me like a glove. I ordered the same size but sadly the new pair were too big. As a result they constantly slipped down.

JB: on the other hand, these fit me just fine (me being slightly bigger in the leg). If you are in the market for a pair do check the calf sizing before you order. 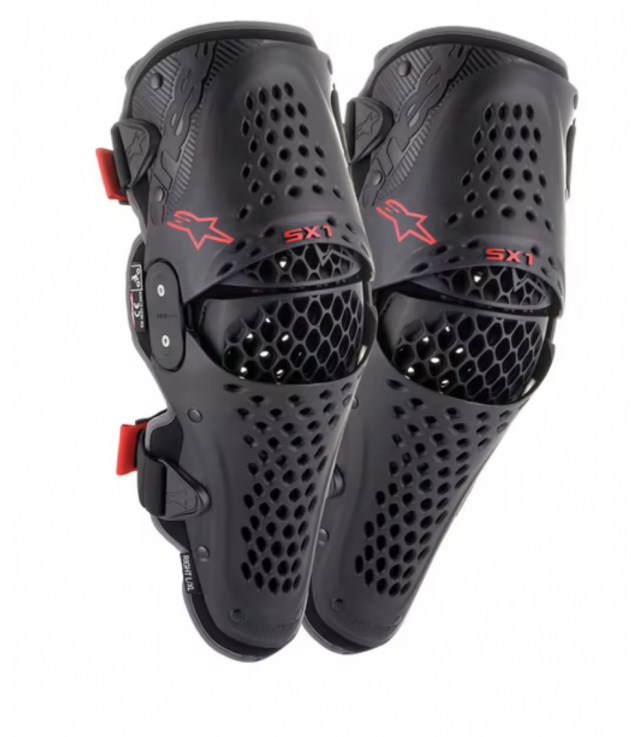 EVS produce some good gear but these do not fall into that category. We really don’t have anything good to say about them other than avoid buying these.

WM: The genuinely are a waste of plastic, they are too flimsy to offer any significant protection. Besides the poor quality they are too wide in the knee to provide any support.

JB: Same comments, plus the crude hinge does nothing except rub and irritate. Sorry EVS, we love much of your stuff, but not these – don’t buy them. 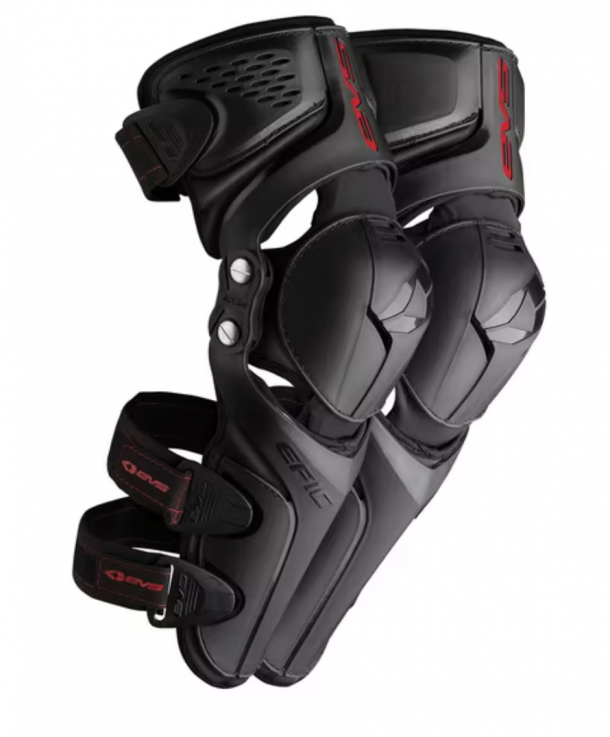 There’s a lot to like about these guards, the interior is made of a soft neoprene material which is removable and washable which makes them pretty comfortable. They fasten and stay in place well, are double hinged and have great patella cap protection. They’re not too bulky and fit most mx pants well. Being a halfway house between a guard and a brace they give a feeling of security. On the bike they did offer a better range of motion than most braces but not quite as free a movement as a guard offers.

WM: In comparison to a guard they are a little heavy. It’s also a little harder to feel the bike between your knees given the double metal hinges. 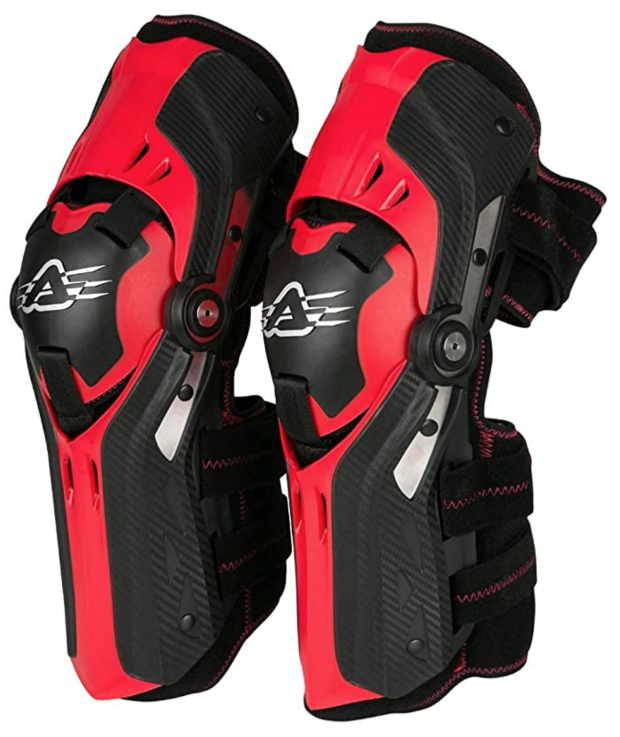 If you are looking for a knee guard that you put on and forget, then you’re going to love these. The outer shells (or sliders) on the pads are made of rigid TPU that provide impact protection from above the knee to about mid-shin. Leatt have jammed as much 3DF foam around these pads to ensure that the overall coverage is excellent without being restrictive. Articulation at the knee was unrestricted. The pads are pre-curved so finding the right positioning for them is pretty easy. The perforated neoprene that holds all the pads together is super breathable and the back of the pads are constructed of strong but lightweight mesh.

WM: I loved the connection I had on the bike wearing these besides them being the first pads / guards that I’ve have been able to ride with for eight hours or longer without trail rash. What a win! My final word is that you want to have confidence in the performance of your guards when it matters and Leatt’s 6.0 3DF guards did exactly that. The combo of hard outer shell and 3DF padding gave me the comfort to not worry about my knees.

WM: Nothing, I rate these babies! For me they were the clear winner.

JB: They must be good, I never got to see them! 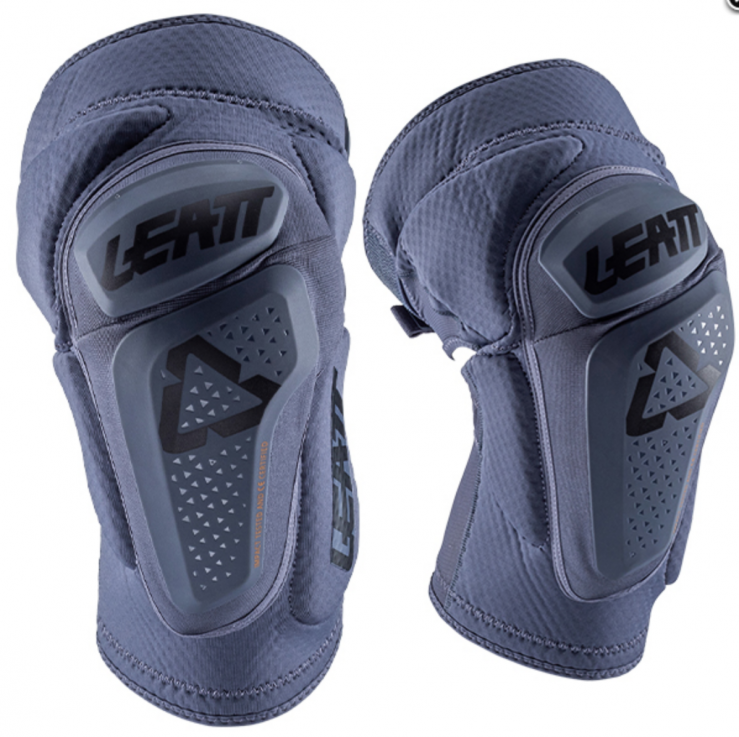