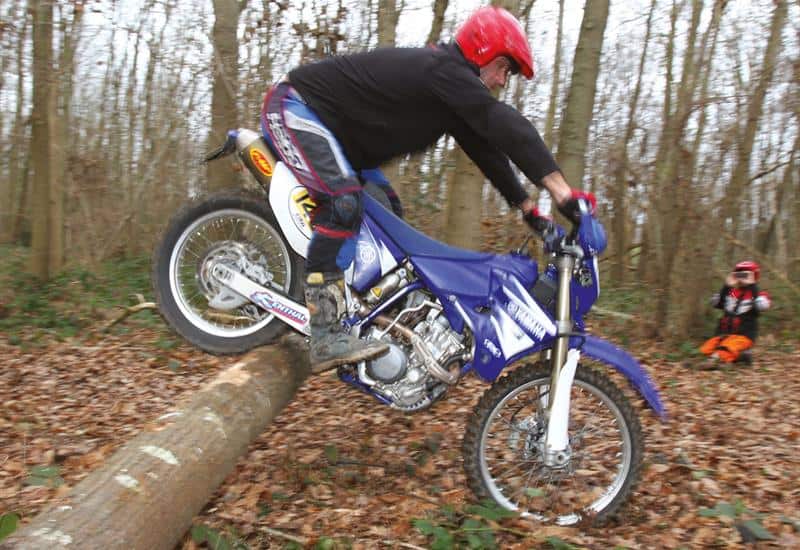 TRICKS IN THE STICKS

Want to make life easier on technical terrain? Fancy picking up some trials skills to apply to your dirtbike riding? We sent new boy Alex Waters off to pick up some Tricks in the Sticks…

As Si and myself set off from RUST’s secret underground lair on a crisp January morning, two things were going through my head. Firstly, this was going to be my first assignment for RUST. Secondly, was the fact that we were going to spend the day riding trials bikes. And I’d never ridden a trials bike in my life…

Our destination was a smallholding in Kent, where Jason Pearce runs Tricks in the Sticks, a training school specialising in trials technique, wheelies, stoppies and all manner of off-road shenanigans. RUST has sampled the school before, though we were keen to see what Jason had in store having called us up to say that he was now teaching people how trials skills can translate onto an enduro bike. Si describes the previous outing there, where the day had consisted of steep climbs in slippery woods, wheelies the full length of a field, and trying to get his knee-down (on wet grass)  from the ‘seat’  of a trialler. Carry these skills over to an enduro bike, you say? In my head I’m predicting carnage…

Still, I am always up for trying something new, and with this in mind I have two goals for the day: To get through it without making a complete ass of myself in front of my new work colleagues. And to come away with some new skills (in that order)… 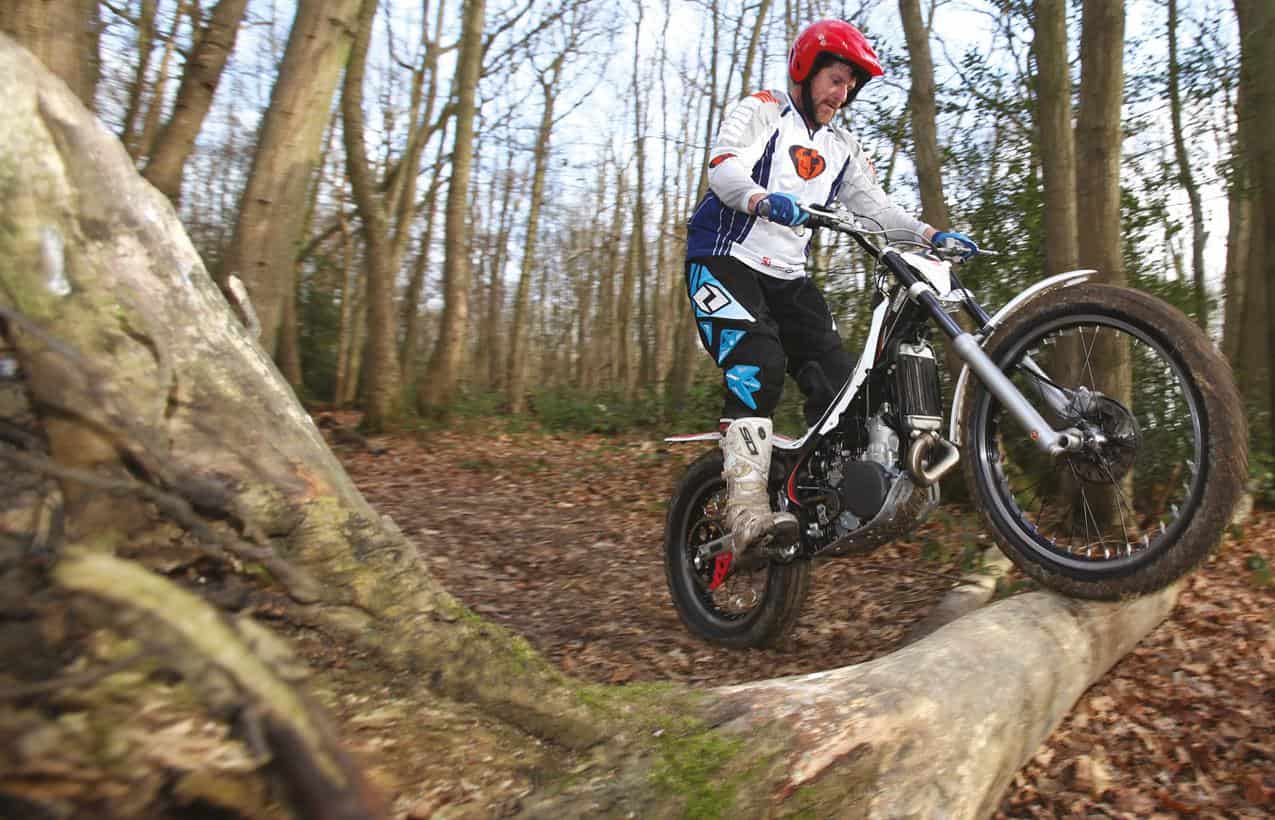 We arrive in Sandhurst and are firstly greeted by a grinning JK – RUST’s trusty part-time tester and another trials bike virgin – fresh back from a snowboarding trip to the Alps. He’s parked up in a small farmyard complete with a couple of barns and a paddock with some ponies being put through their paces.

After a quick chat with JK I wander off to find Jason, who is busy preparing a spanking new Beta trials bike that he’s just picked up from Inta Motorcycles. Jason’s sporting a huge grin, and there’s a glint of mischief in his eyes… a hint of things to come, I fear!

Having introduced us to Mick who’s helping him out on the day, that’s the formalities over and he kits me out with some boots, a lid and some gloves. A red crash helmet clashes perfectly with the lairy orange Acerbis riding gear, kindly ‘donated’  by Barni…

Three other Betas are ready to go, along with a Yamaha WR250F kindly lent by Jason’s mate Steve, so after a brief introduction to the bikes we’re led down a track, through some woodland and into our main play area – a good sized rectangular field surrounded by woods. At one end there’s a marquee with refreshments and a BBQ at the ready…

There’s an air of informality that I warm to immediately. The emphasis of Tricks in the Sticks is on the practical side rather than hours of theory, which, never having been a huge fan of the classroom, suits me well. Before he starts teaching Jason encourages you to simply spend some time on the bike and get a feel for it. The 270cc Betas quickly inspire confidence. Having never even thrown a leg over a trials bike the initial feel is quite strange. The pegs feel set back, the bars a bit of a stretch forward, and the gear lever is higher and much further forward than on a regular dirtbike bike – but with good reason. The punchy little bikes are designed in a way that makes you rethink how you use a gearbox. You often select one gear and stick with it, taking your foot off the peg and shifting with your heel if strictly necessary. And with careful use of the clutch they’ll happily pull away in fourth.

We all buzz around the field for a few minutes and then gather round to watch Jason’s first demonstration of the day. He starts off with a wheelie lesson quickly followed by a pivot turn – a handy technique for turning around in confined spaces (like a sunken lane)  that requires you to plant a foot whilst hoiking the front-end and turning the bike around on the back wheel. I manage a fairly modest wheelie but struggle with the turn. Si owns a trialler so is more familiar with the bikes and the techniques, and JK rides on a regular basis but also initially finds the feel of the little Betas unusual. 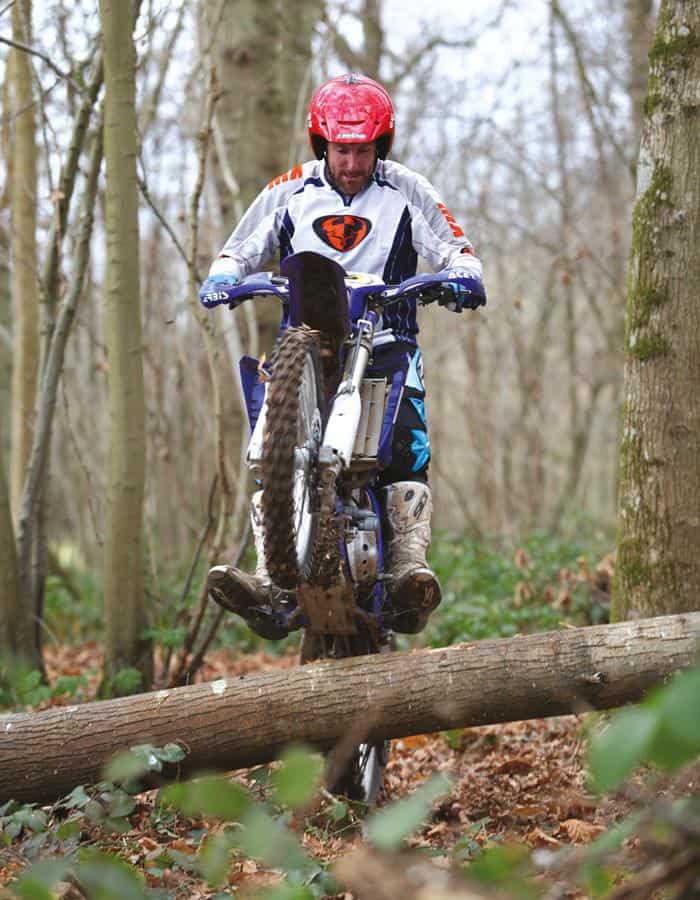 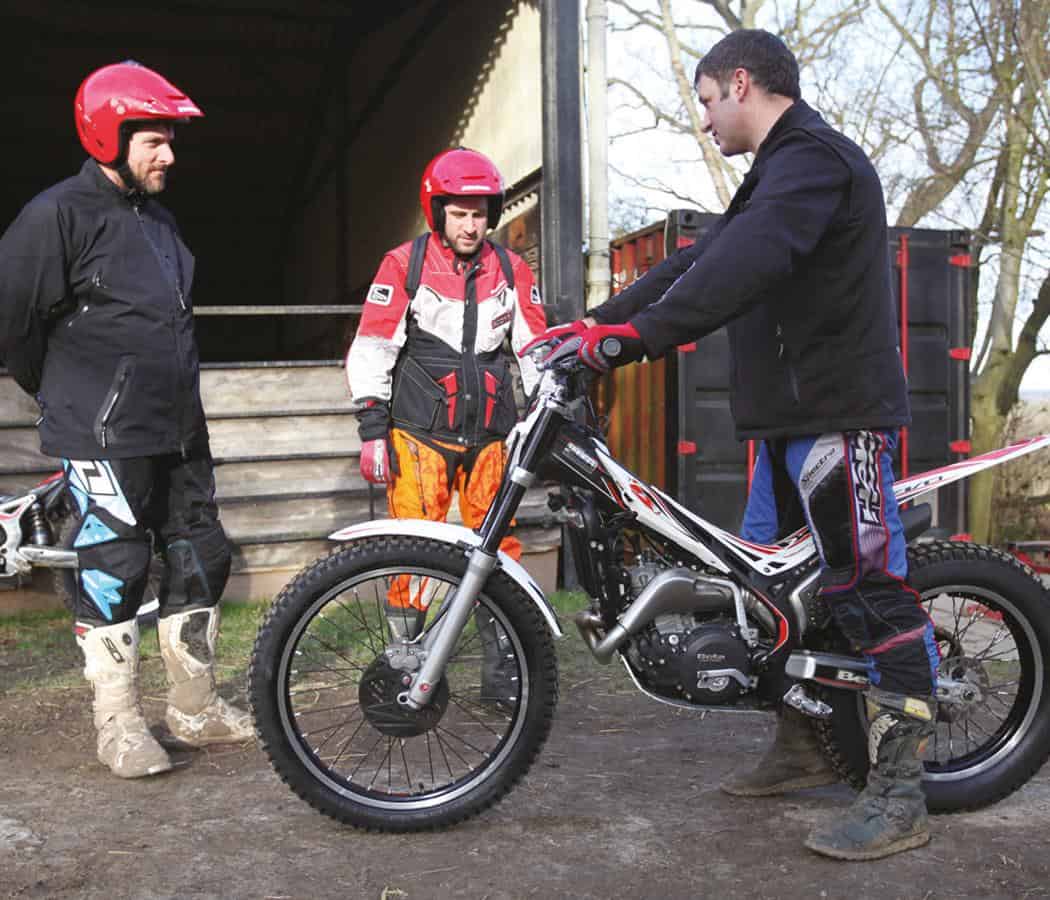 Dizzy with so may turns, we head of into the woods, and for me the fun really begins. Jason guides us up and down a little gully with a small stream at the bottom, threading through the trees on either side and over to a series of specially felled boughs to teach us the next skill in his considerable armoury. So light and manoeuvrable, the little bikes really come into their element in this terrain and, as Jason puts it, you can ‘steer them with your feet’.  JK’s just about to put his boots up on the bars when Jason explains that he meant by putting your weight through the pegs…

He demonstrates the two-part technique for crossing a small obstacle at slow speeds: First gear, a small wheelie to put the front wheel three-quarters of the way up the log and then another quick blip of the throttle to bring the rear wheel smoothly over, rather than simply bashing the bike over using the sumpguard. We all have a few goes and after an initial nervousness I find myself (relatively)  comfortably crossing a series of logs.

Jason then shows us the same method on the WR. If you came across such small logs on your dirtbike you’d almost certainly hit them faster than we’ve been trying, but the technique makes for a smooth crossing and certainly applies to the taller obstacles. One freshly downed piece of timber had come to rest at an angle, giving us a chance to gradually develop our technique. You start off down at stump level and as your confidence grows you hit it higher and higher along its length. Again there’s no pressure to put yourself outside of your comfort zone, so I carry on practising over the smaller logs to try and improve my riding before having a crack at the larger obstacles.

After a quick drinks break we run through a balancing technique which involves riding along at a snail’s pace, gently leaning the bike over on almost full lock, whilst hanging backwards and to the side to compensate for the angle of lean. This allows you to turn in an incredibly tight circle. Having not ridden in a while, for me this was the most useful thing I learned all day as it inspired confidence in myself and my ability to control the little Beta. 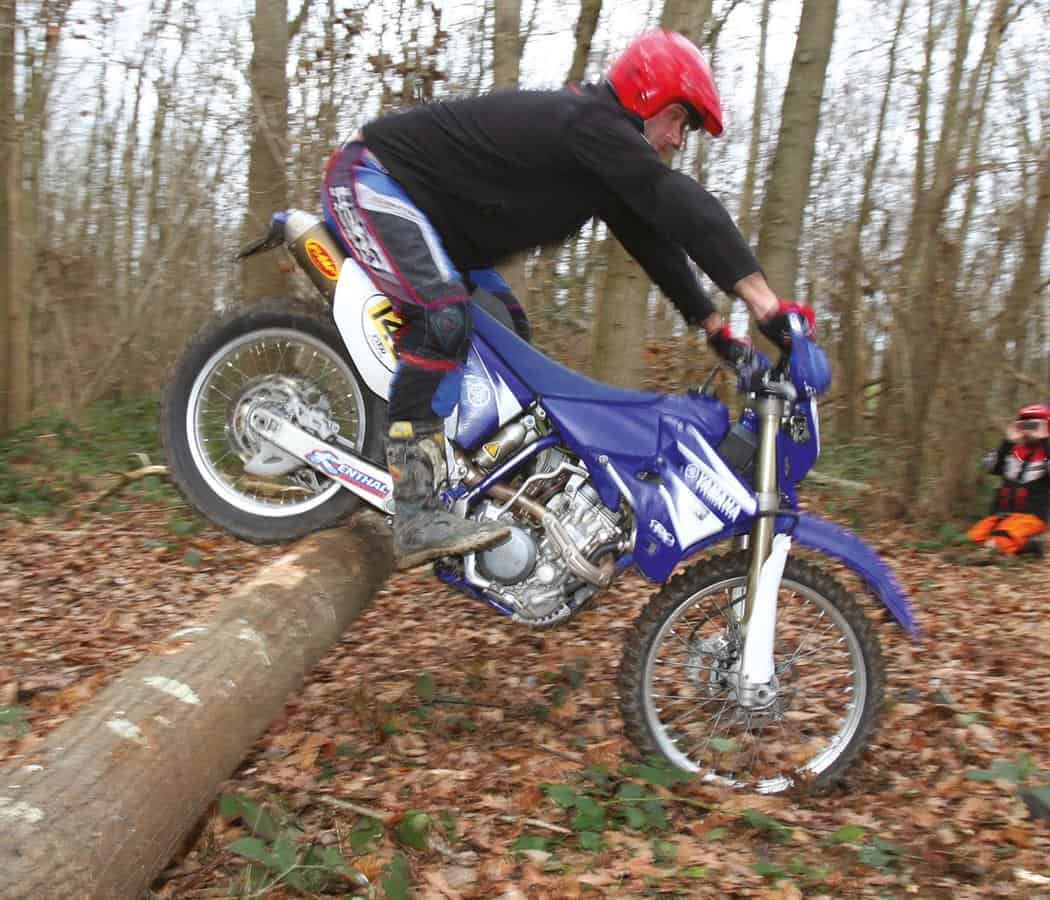 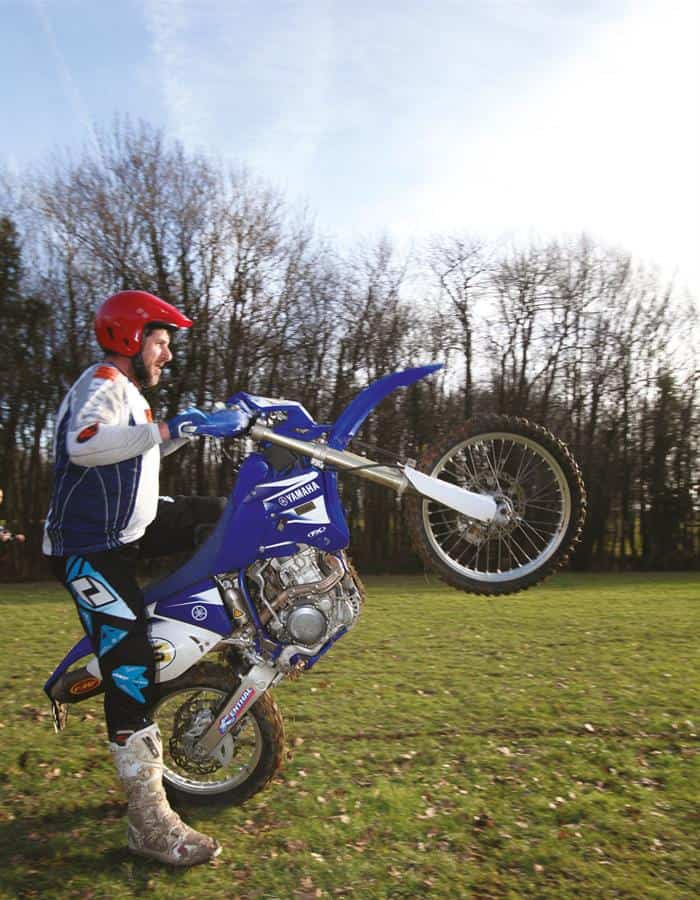 Having been lucky with the weather we had a BBQ for lunch, which was another new experience for me bearing in mind it was late January! The talk centred mostly around bikes and the Dakar result, but we also learned a bit more about Jason’s interests including, but not limited to, his days of racing superbikes and also chucking himself down alpine slopes against future Olympic skiers back in the day when he did three ski seasons back-to-back.

After lunch Jason showed us another trials skill that you can employ on an enduro bike, though it certainly takes some practise. And that is the bunnyhop. Back in the day I was mustard at these on my BMX, but the same technique didn’t seem to work on a trials bike. Jason showed us the way. Essentially the trick is to compress the suspension and then unload it, and as the bike rebounds upwards give it a quick crack of throttle. If you’ve a bump to launch off then even better. It’s certainly something which takes a lot of practise and spot-on timing. I began to regret a second helping of pork chops…

Following this, we spend our time putting into practise the techniques we’ve been shown, swapping between the Betas and the Yamaha. As the light begins to fade, and so too our energy levels, we take one last ride around the woods before heading back to the farmyard. 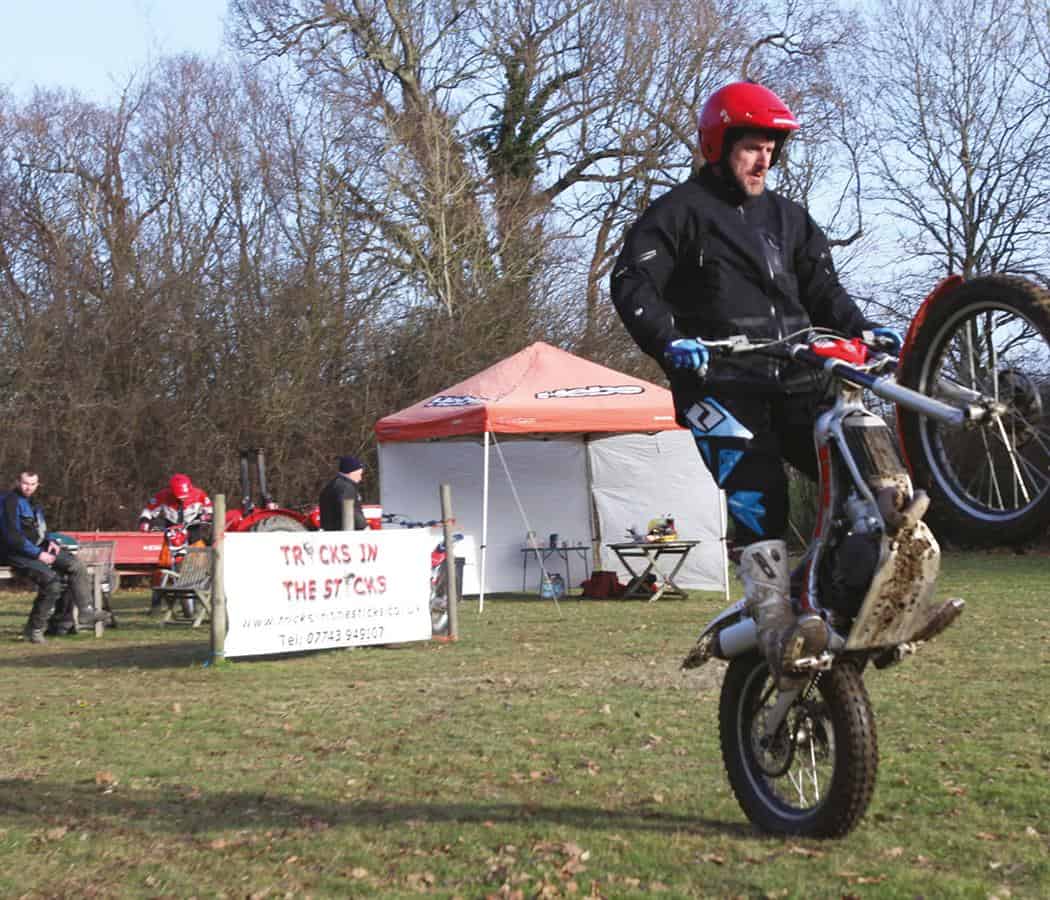 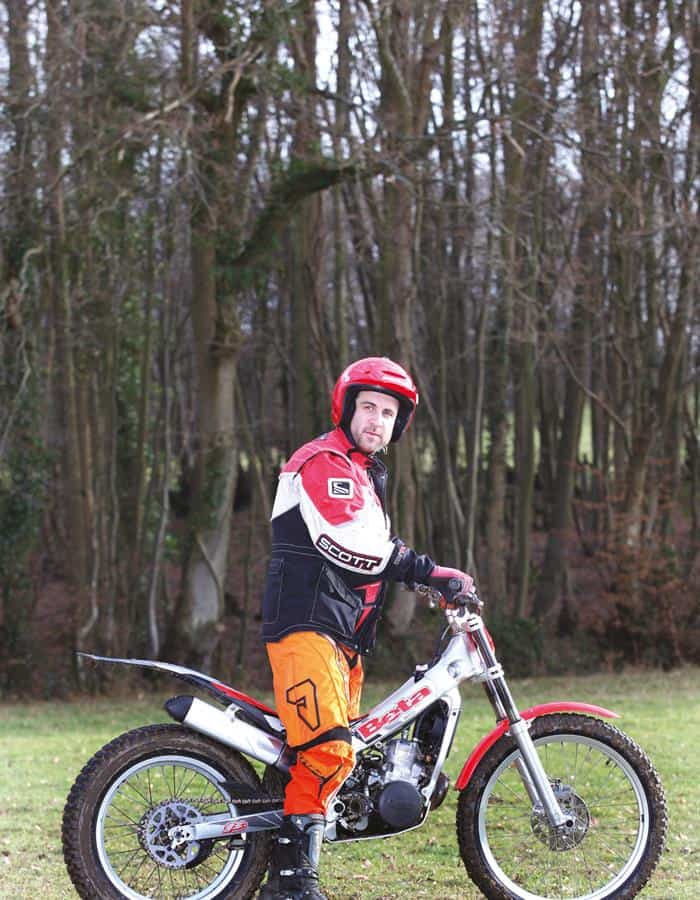 Trick of the Light

The day also highlighted to me just how accessible the world of trials riding is. Between us, we only got through one gallon of fuel all day, and that’s a lot of bang for your buck when you consider the bikes are also relatively cheap to buy and maintain. Plus you don’t need a huge amount of land; you could use one to hone your skills in a reasonable size back garden!

Even if you’ve no intention of getting into trials I can still recommend a day with Jason and his team. The benefits of some basic trials skills will be of use to anyone riding the dirt, and even on-road (maybe not the log-crossing but certainly the tight turns).  Jason commented that he’s ridden all manner of bikes over the years, from tuned R1s to big-cc customs, but always returns to his trusty trialler to perfect a new technique. If nothing else it certainly fine-tunes your throttle control…

So for me it was mission accomplished. I definitely polished-up my rusty riding technique and picked up some new skills, plus I didn’t make a complete ass outside of myself either. Well, maybe just a little bit…

Thanks to: Jason and Mick at Tricks in the Sticks

There are many more issues of RUST Magazine for your perusal just click on the link and enjoy! https://rustsports.com/issues/ 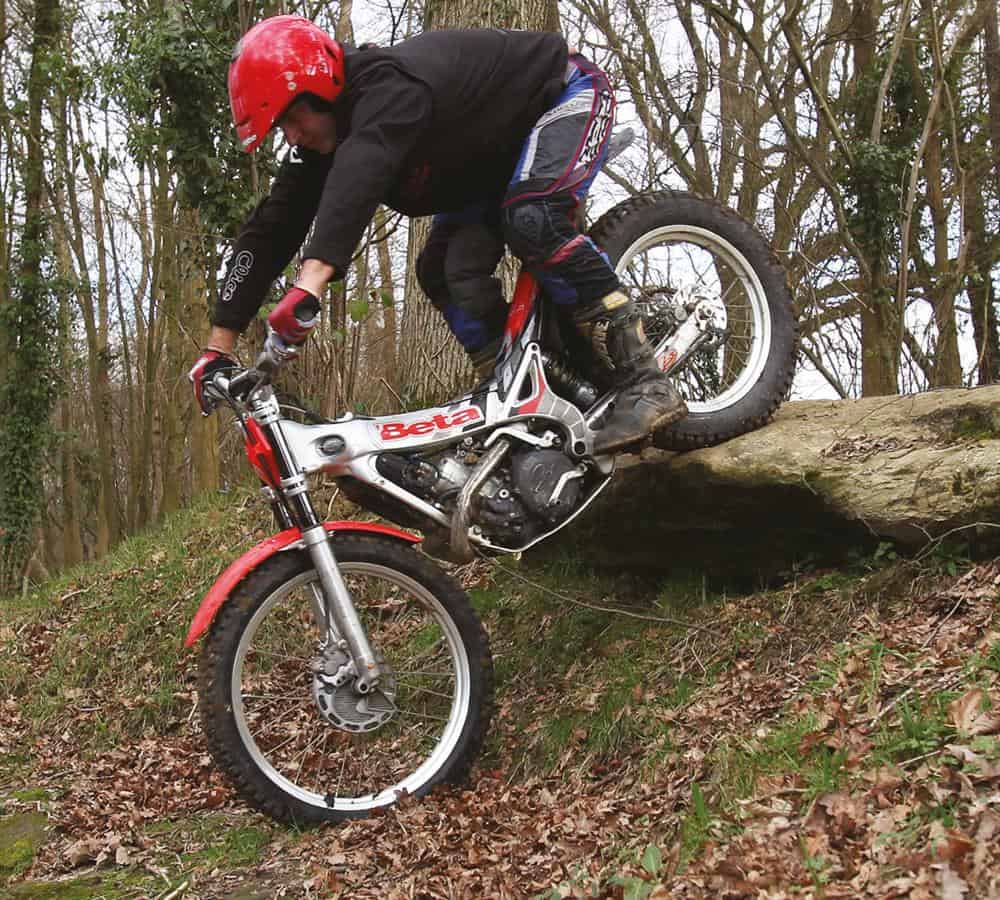 Jason offers one-to-one tuition for complete beginners, and prefers to keep groups small (no more than 4 riders)  so that he can offer as much tuition as possible to individuals. Alongside a full day’s training  a special half-day package is available for £150 per person (including use of a Beta Rev3, helmet, boots, gloves and all important refreshments – after a couple of runs through the woods you will need a drink of something cold!)  If you want to use your own bike in a group it’s £125 per day and Jason will do one-to-one days for £300 per day (or £200 if you use your own bike).  At some point Jason will be offering the half trials/half enduro day, although at the moment he’s still deciding which enduro bikes he will be using. In the meantime you are welcome to take along your own enduro bike for the afternoon session.